216 replies to this topic

Fair enough. I feel ya there on painting different colors of the same thing. Sometimes in the news and rumors I'll click on some new Primaris model thread (I don't collect space marines, let alone anything with the imperium keyword, but like to be on top of new stuff) and some people are like "O I have to get those for my X, Y and Z chapters". Blows my mind!

At least you have slaanesh daemons to paint when you get bored of power armor, and can use them in the same army!

I really like your helbrutes. The whole force looks sound.

Thanks!  They don't seem to do very well on the tabletop (though, that may well be more because of their commander than any fault in the forces

), but at least they look good doing it.

I look forward to seeing your own force as it progresses.

Thanks! I'm going to use a couple of helbrutes, one for CC and one with noise weapons. There's something about heavy infantry going up field supported by dreadnoughts that just feels classic 40k. Like White Dwarf battle reports from the 1990s.

Somethings just arrived in the mail for me... 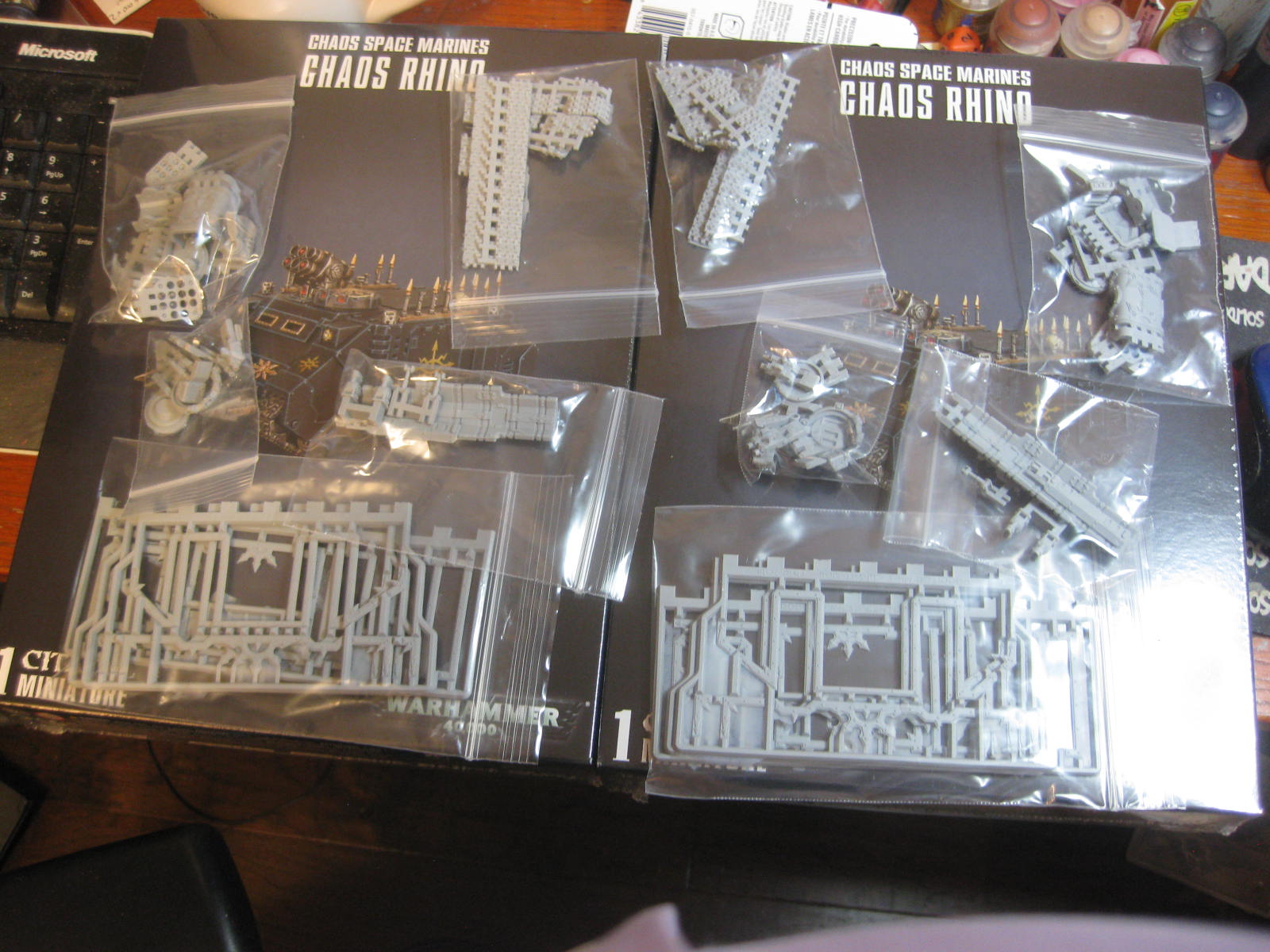 2 rhinos from GW, 2 full sets of the trimmings from Dark Works (https://thedarkworks.bigcartel.com/) which is B&C's own Subtle Discord's online store.  Conveniently, both orders arrived on the same day.

Here's a close up of some of the resin: 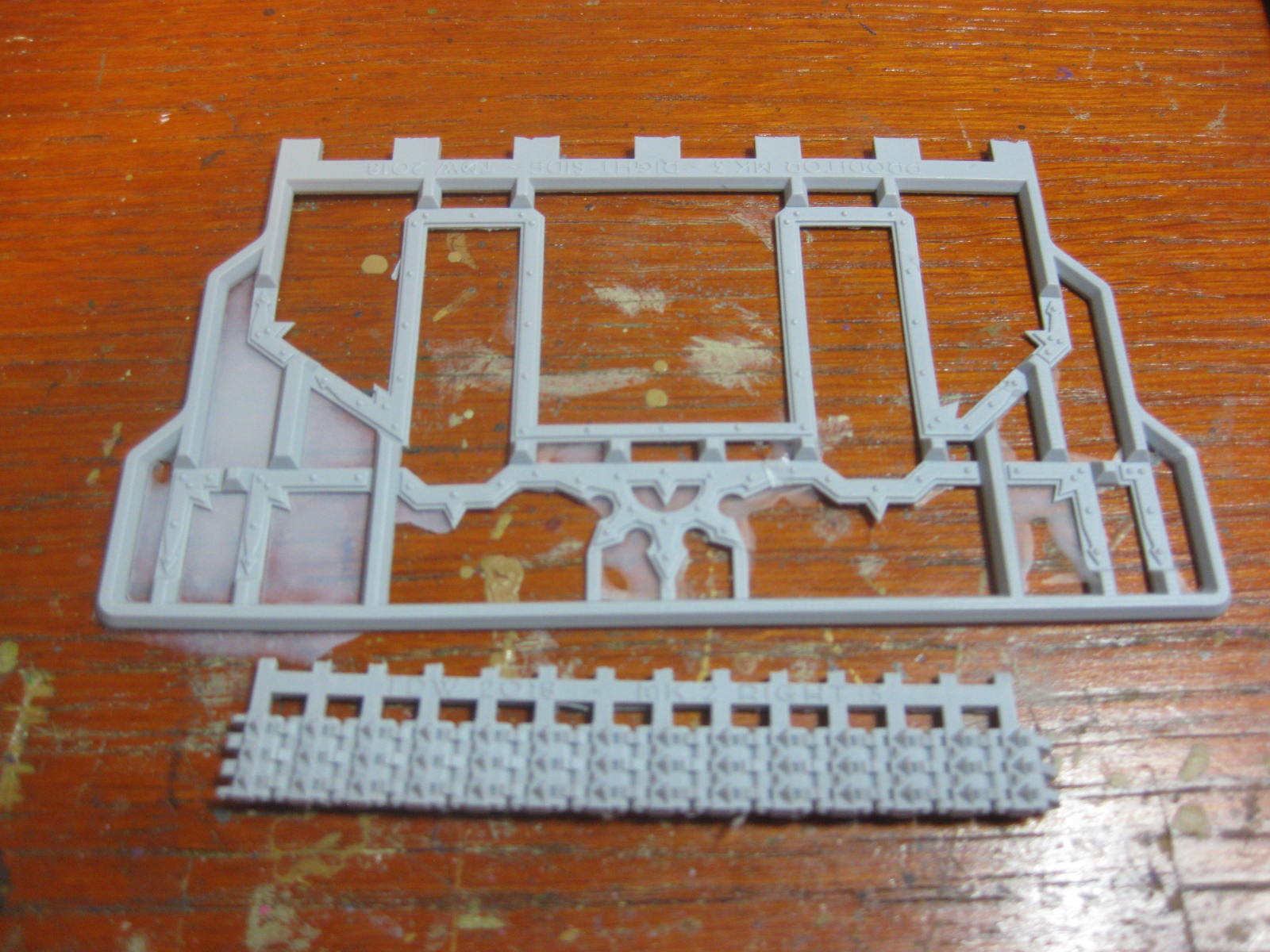 My picture doesn't show it very well, but its super crisp.  Now I just need to wash it and figure out how it all goes together.  I'll let you guys know how it goes.

Oh nice. It'll bring the rhinos in line visually with the rest of the chaos models...

Those rhino's are going to look nice! With all the changes in rules for 9th and how important objectives are, rhino's are even more important.

Yeah Verbal, that was my thinking - my army's not big of superfluous spikes, and I wanted my rhinos to be more than just different coloured boxes from the loyalist ones.

That was also my thinking, Putrid, that I don't really have any good ways to get units across the table quickly (other than deepstrike or my bikes) so thought I would try out some rhinos.  I've been promising myself some rhinos (or something with that chasis like the vindicator or predator) as soon as some of that trim was back on Subtle Discord's store, which it wasn't for ages, so when I was told that it was I had to grab some.

I think I'll likely be building a squad or two of melee noise marines to go into them... haven't quite figured out how I want to model them yet.

I keep forgetting that noise marines get the extra attack, can equip chainswords and get champ gear on the champion. Is that how you are planning to gear your's out? Chainswords and something on the champ? Plan on sprinkling any noise weapons in?

They would be straight chainswords and pistols, with probably a fist and a doomsiren on the champ.

I think noise marines with astartes chainswords are really interesting especially in the first round of combat. Four attacks each. I'm putting a lightning claw on my champion as well. Each one adds an extra attack now.

Here's hoping, anyway!  I do know that I will feel kind of bad when they die before melee because music of the appocalypse is so much better with a shooty unit.

Anyway, kind of an image dump as I've finished building my first chaos rhino with the Dark Works additions and some of my own (including bits from a loyalist predator I had built but never painted.  Apologies in advance - I'm proud of my work and want to show it off. 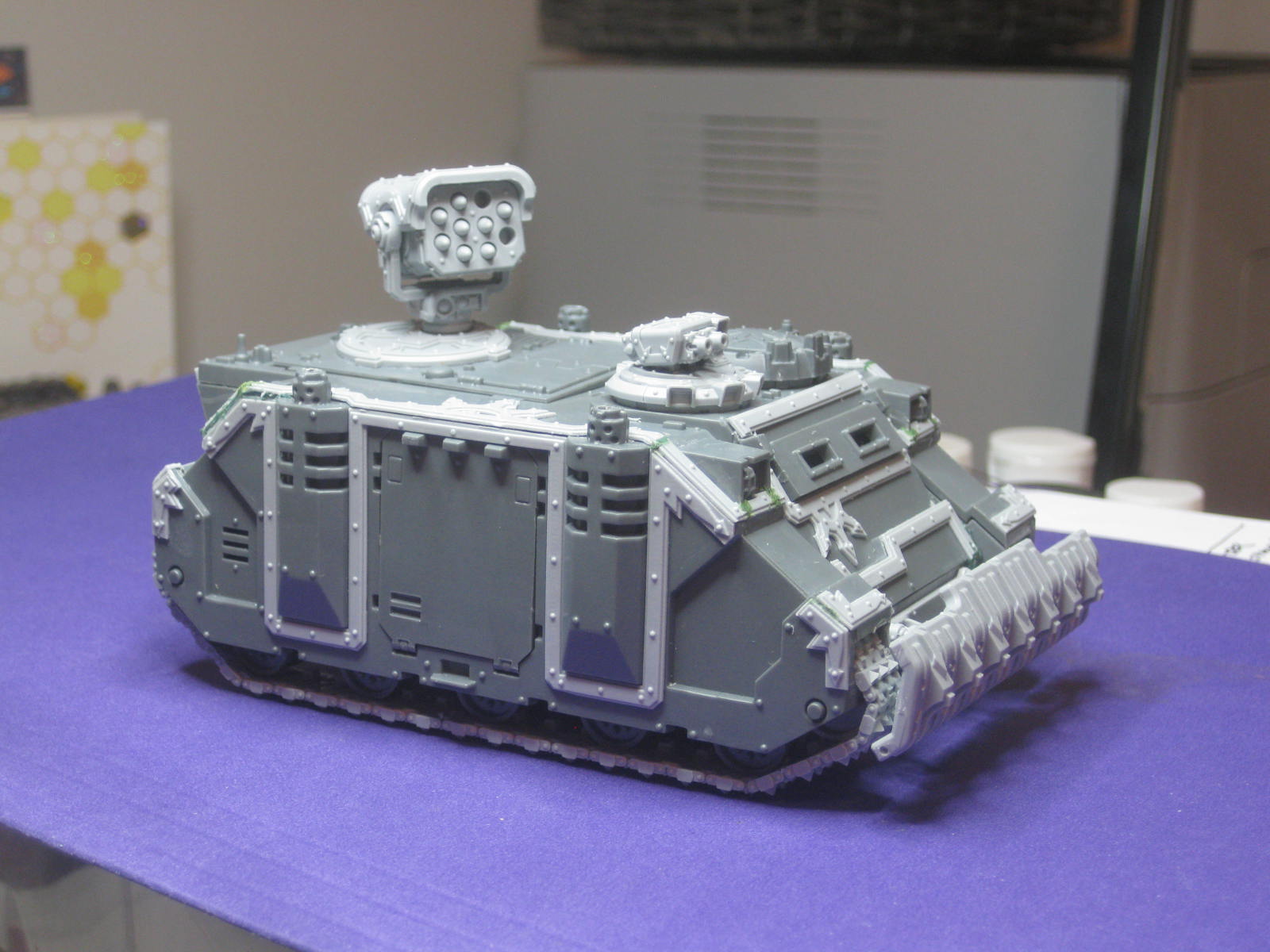 This one shows off the various dark works bits - all the trim, the ram/bulldozer thing on the front, and the tiny little turret.  All the parts were super clean, with virtually no flash and no mold lines. 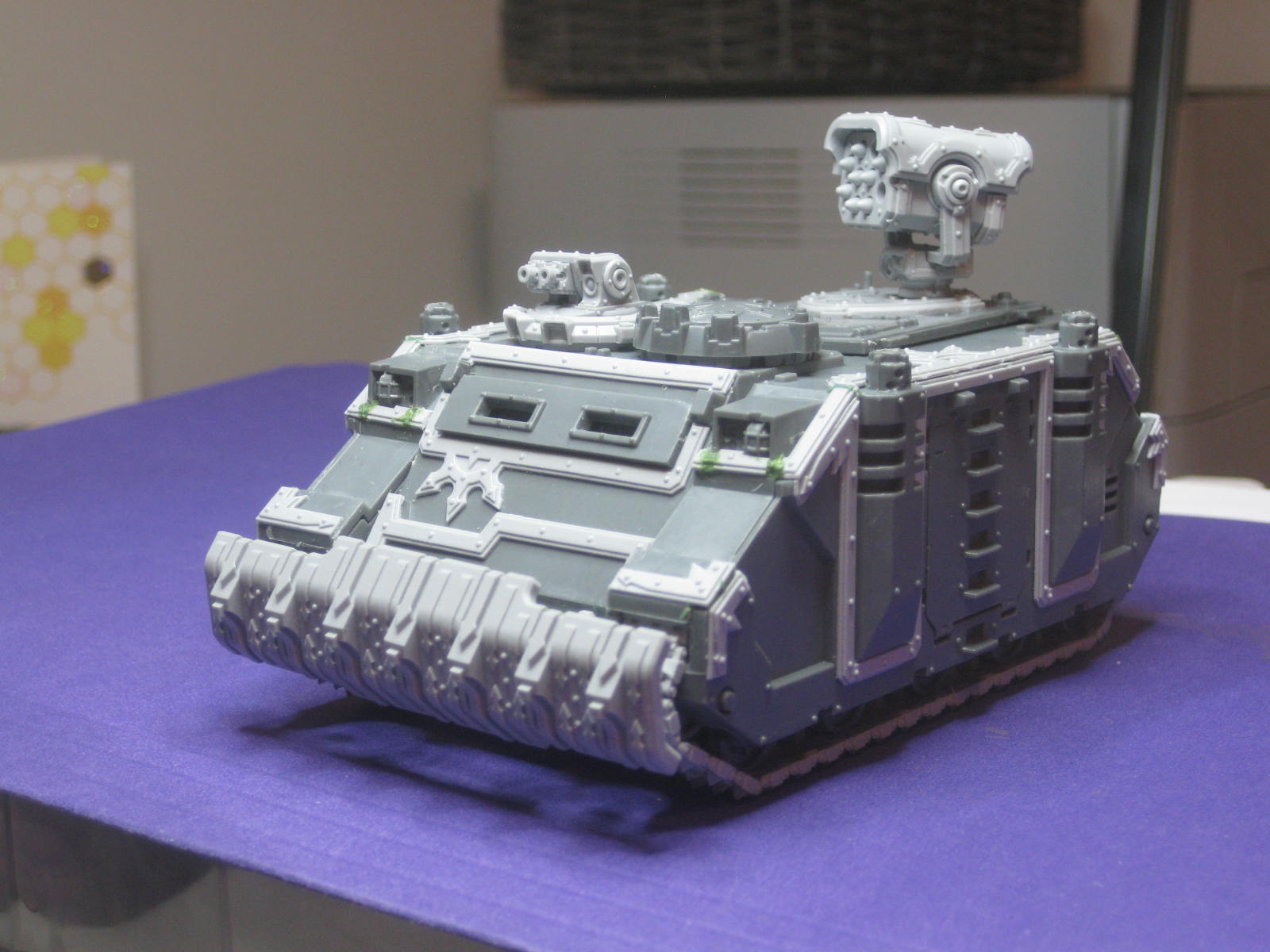 Here's the front, showing off the ram/dozer.  It also shows where I had to get creative - I built the kit with the headlights on before doing the trim - which is designed to have the headlights off.  Luckily, I had some extra trim left over from where the ram goes, so was able to "build" my own by cutting and reassembling them as need (plus a bit of greenstuff).  Think it worked out well. 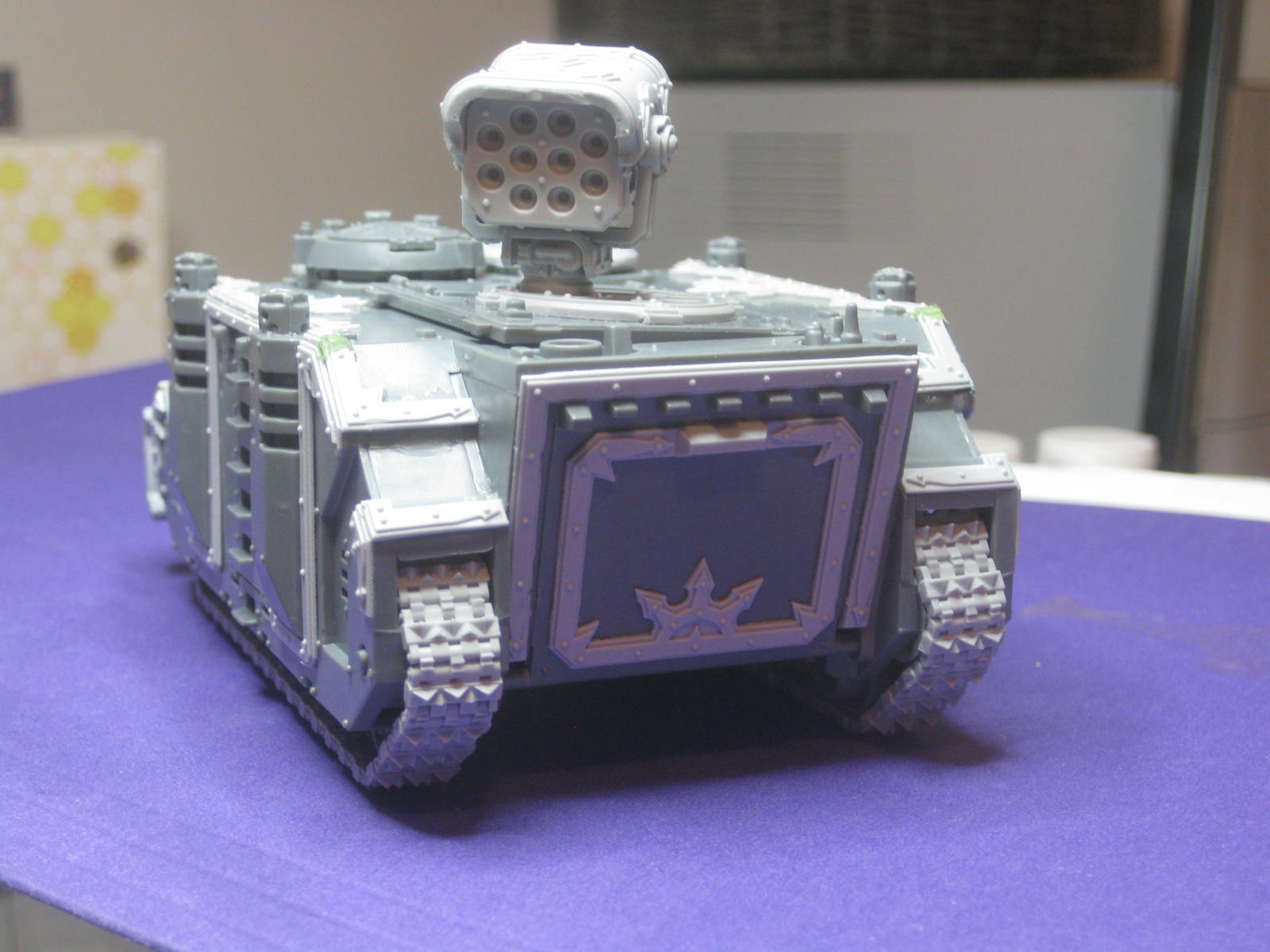 Here's the back - it gives a nice view of the tracks. 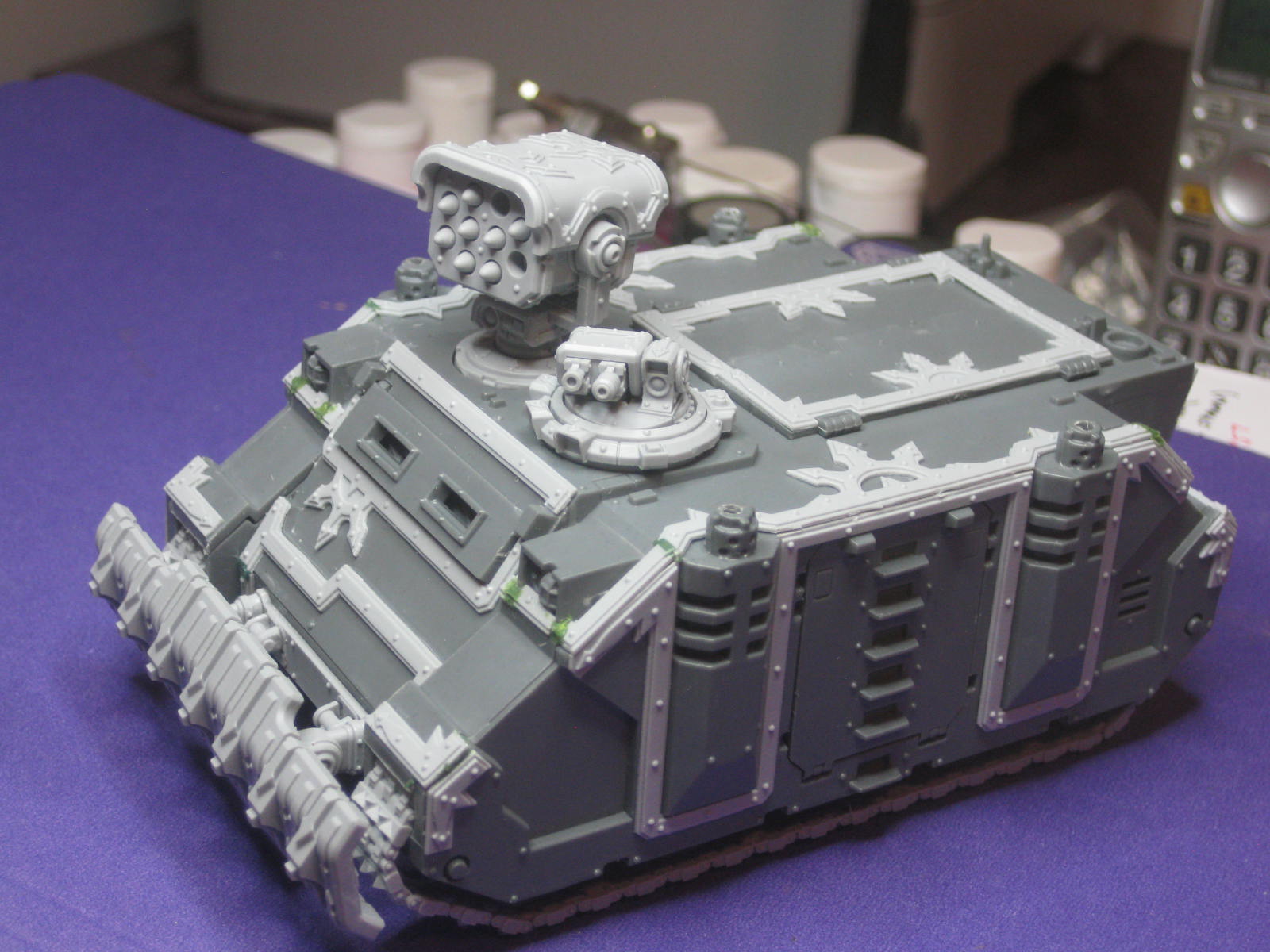 Here's the havoc in the front position, showing off the default rhino top hatch with trim.  In the combi-bolter kit, it has the combi-melta - when you order it, it comes with a combi-bolter and a combi-something else (you choose 1 of the 3)... I think this is the melta one.  I also bought the plasma one, but that will have to wait to go together until I do the 2nd rhino. 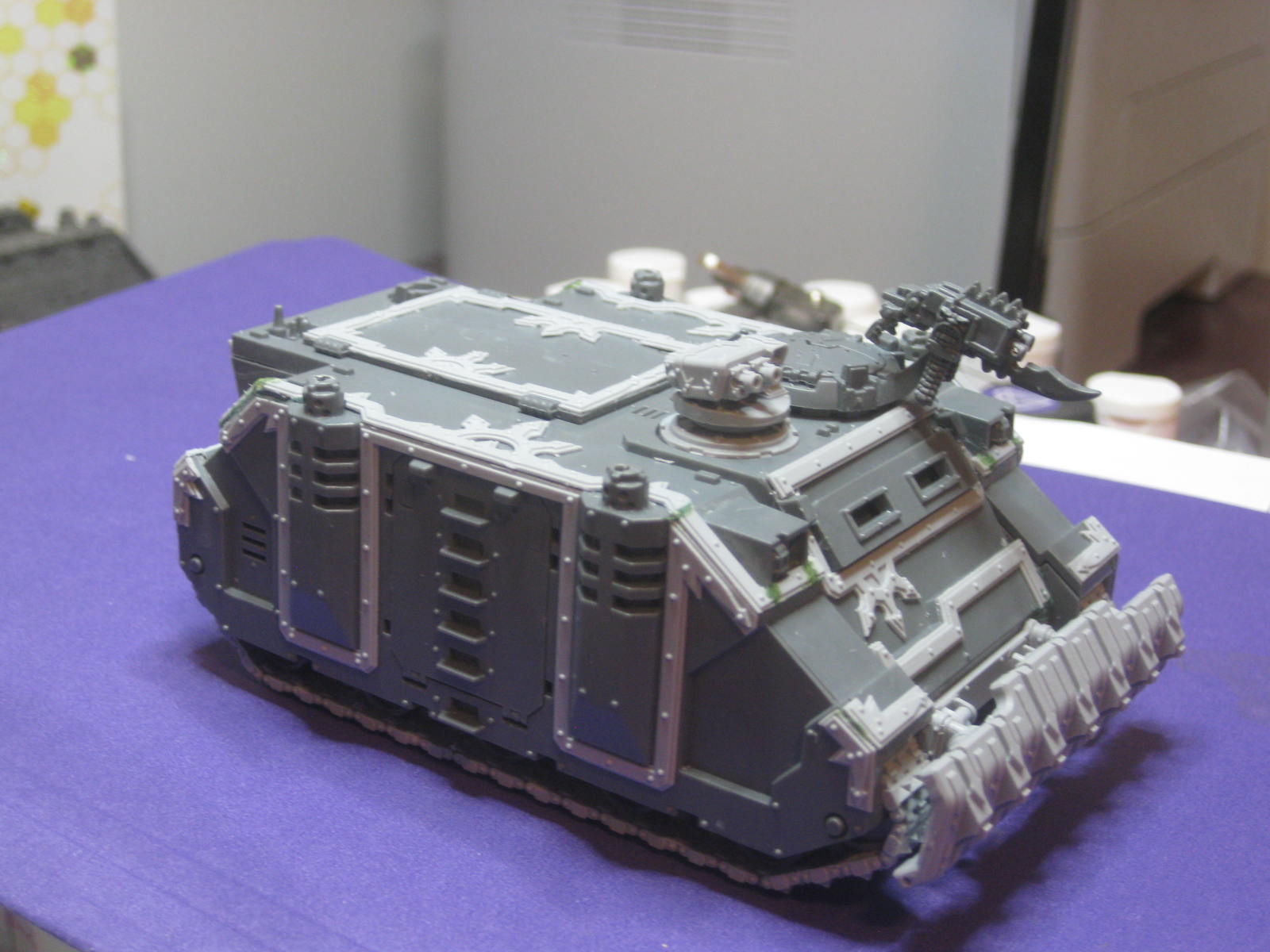 My only real complaint with the Dark Works stuff is the combi-bolter turret - its tiny and cute but is too tiny - the bolters in it are smaller than bolt pistols, so it doesn't really fit the part - especially since I can't field them and the standard combi-bolter on the same, as they are of drastically different scale. 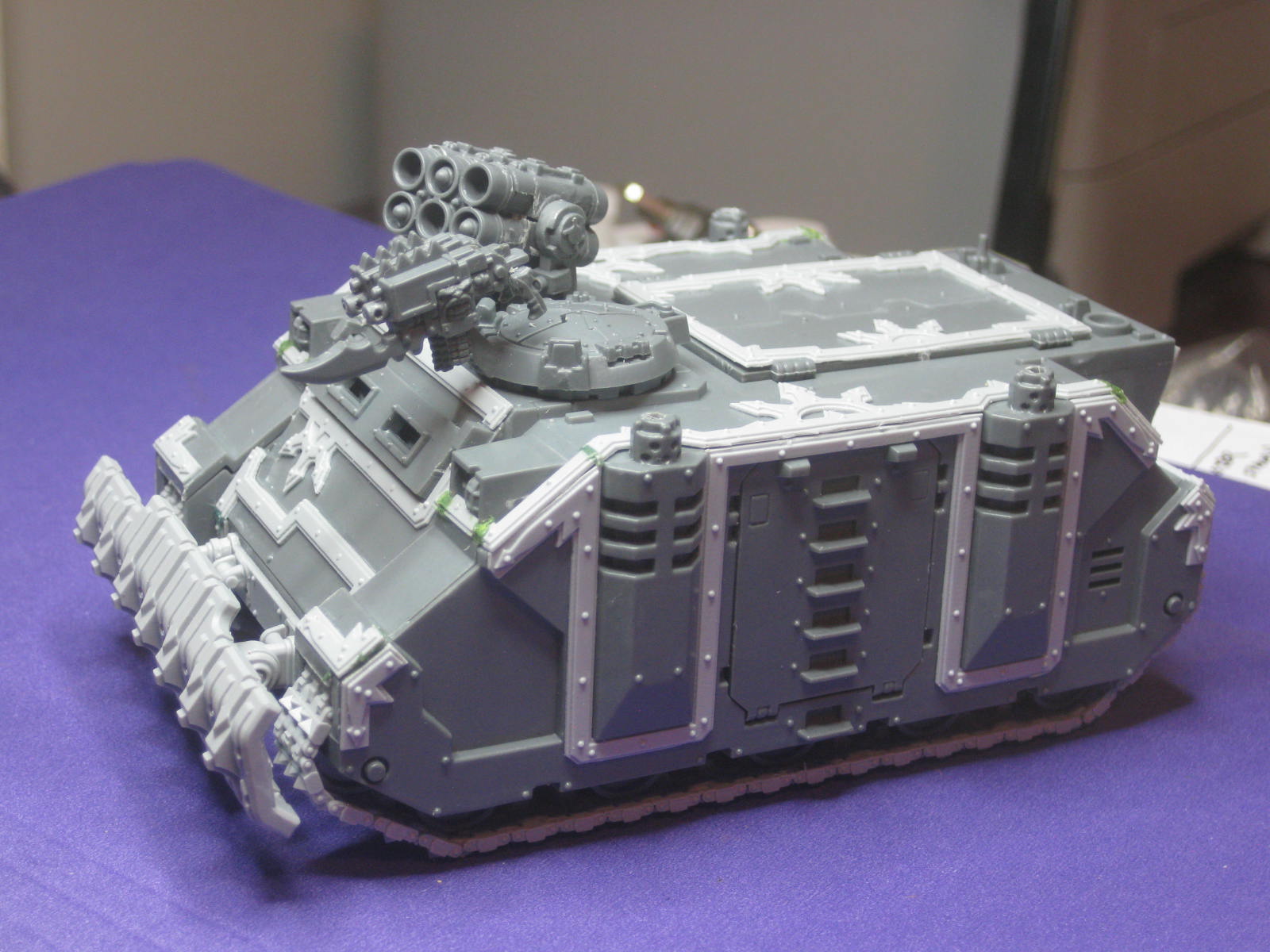 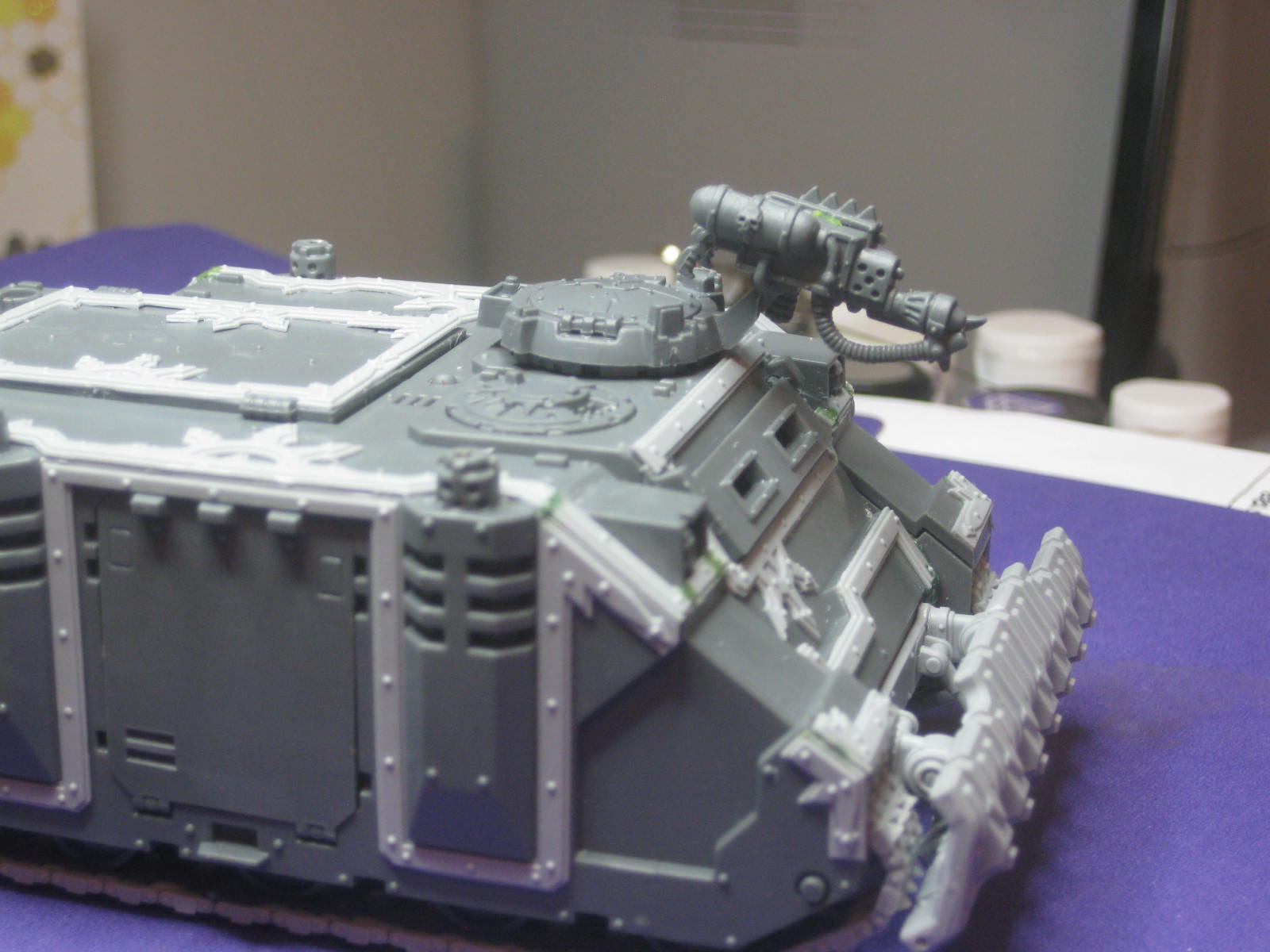 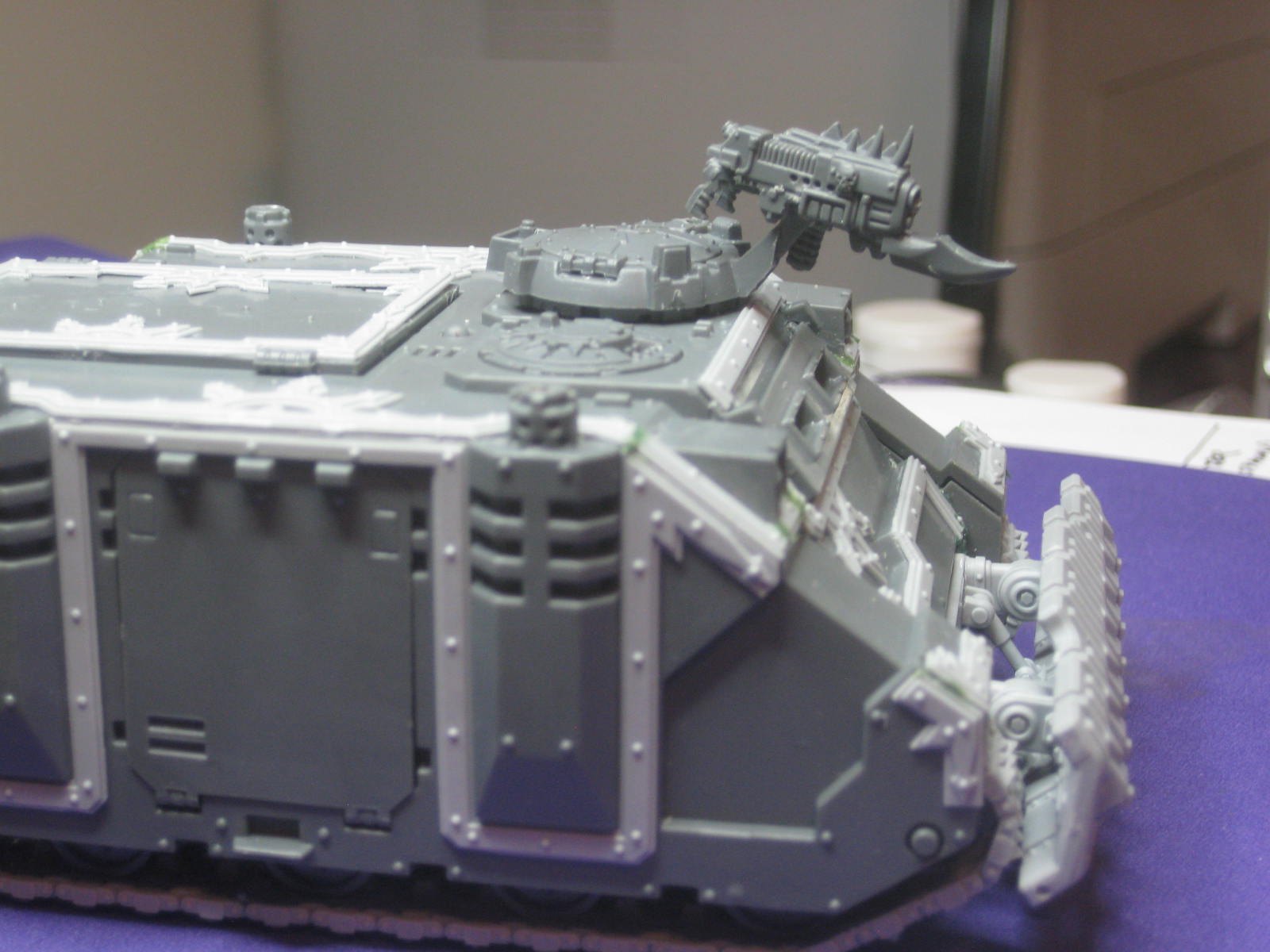 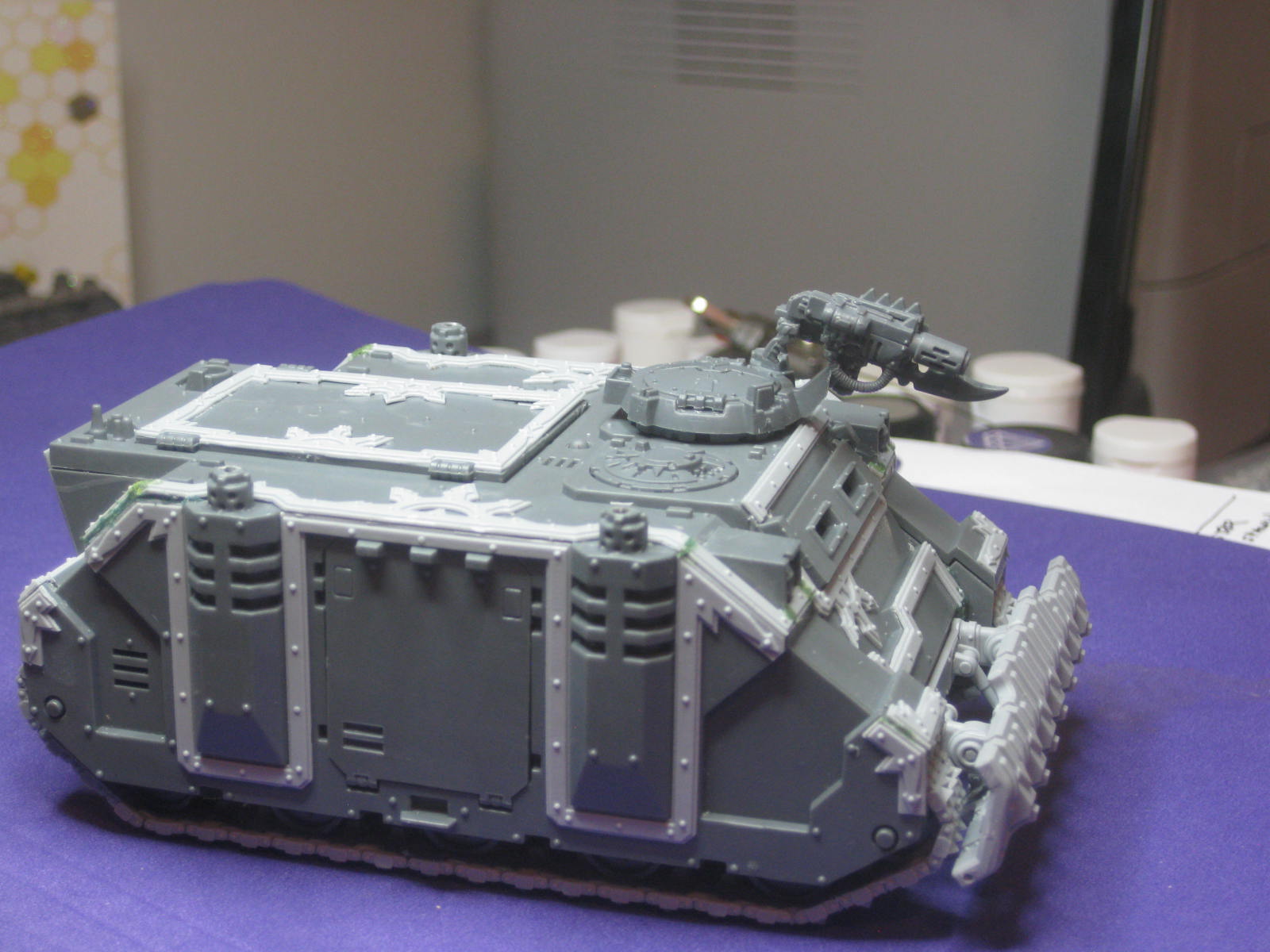 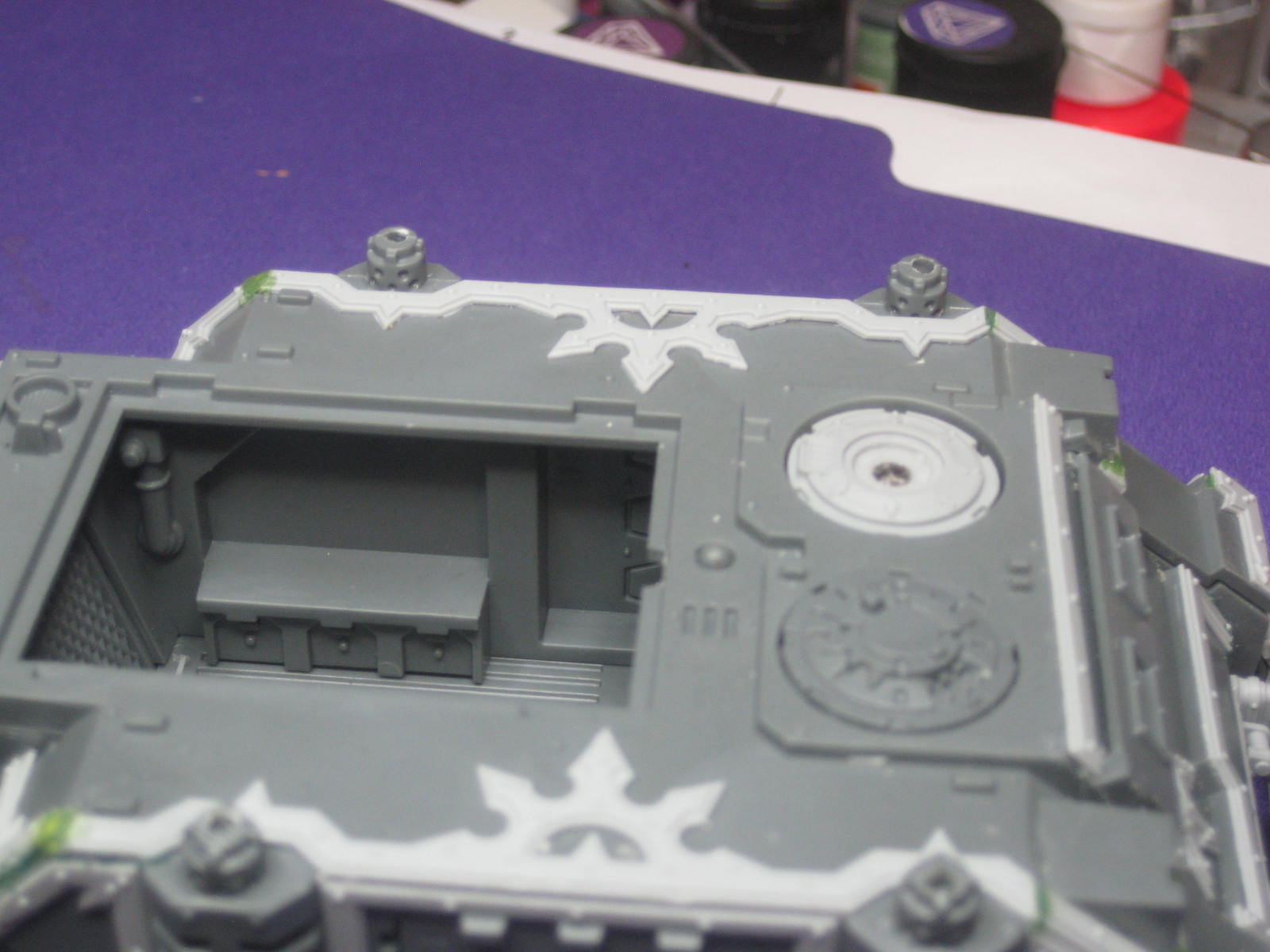 Normally, there is one little bit on the havoc plate for the top hatch that prevents it from resting right if you flip it.  Here I cut a small piece out of the lip to let it rest properly. 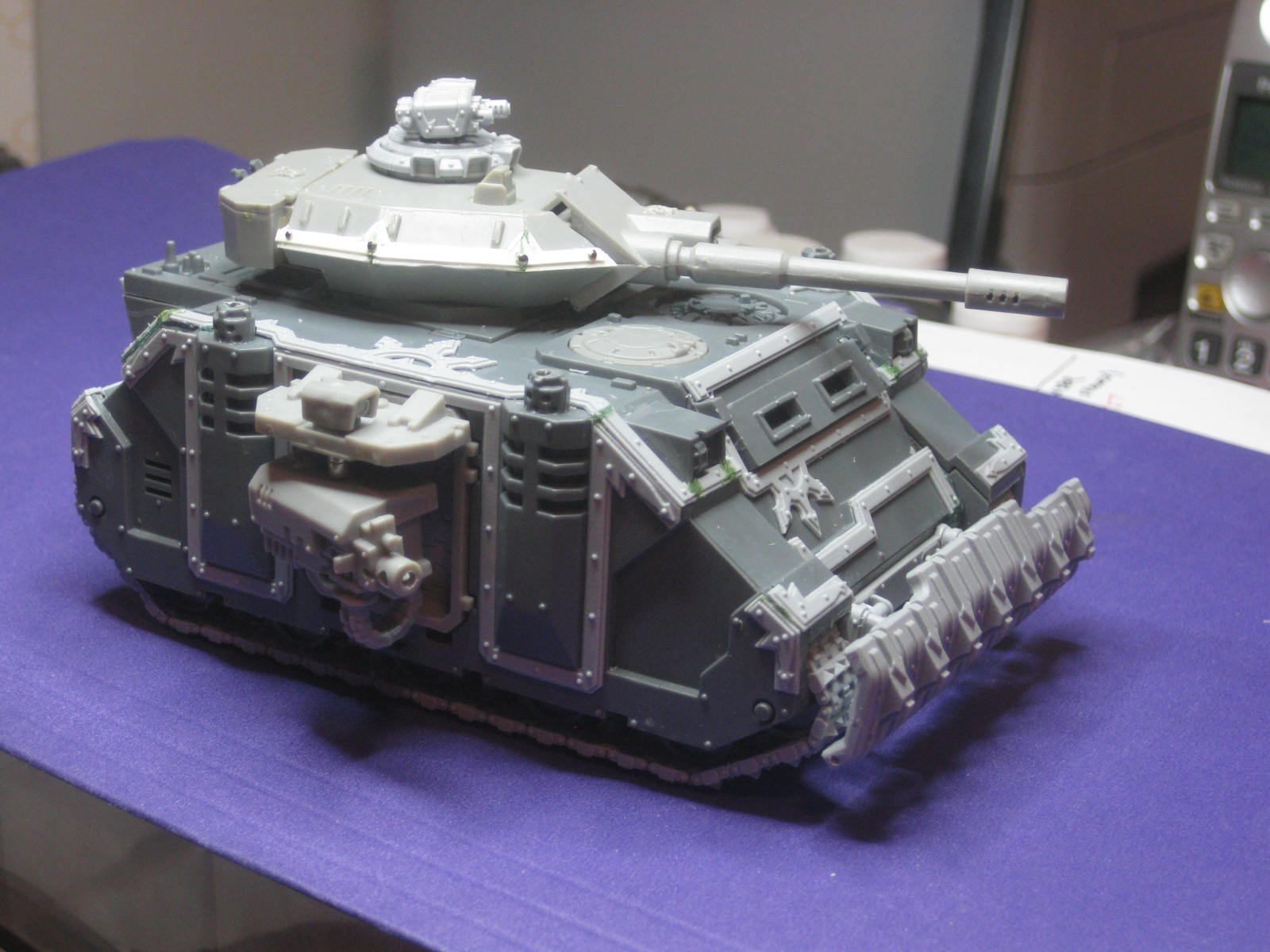 Allowing me to use my old loyalist predator bits to allow me to field it as a predator instead.  Here it is with the autocannon and heavy bolter sponsons.  You can see how the trim prevents the sponsons from resting properly.  If I was to make this a dedicated predator, I would cut the trim to let the sponsons rest snuggly - but honestly, the bit of lean really isn't that noticeable.

On anther note, one place the Dark Works combi-bolter doesn't look out of scale is on the predator turret, which is super cramped to begin with and benefits from a more compact weapon system on top. 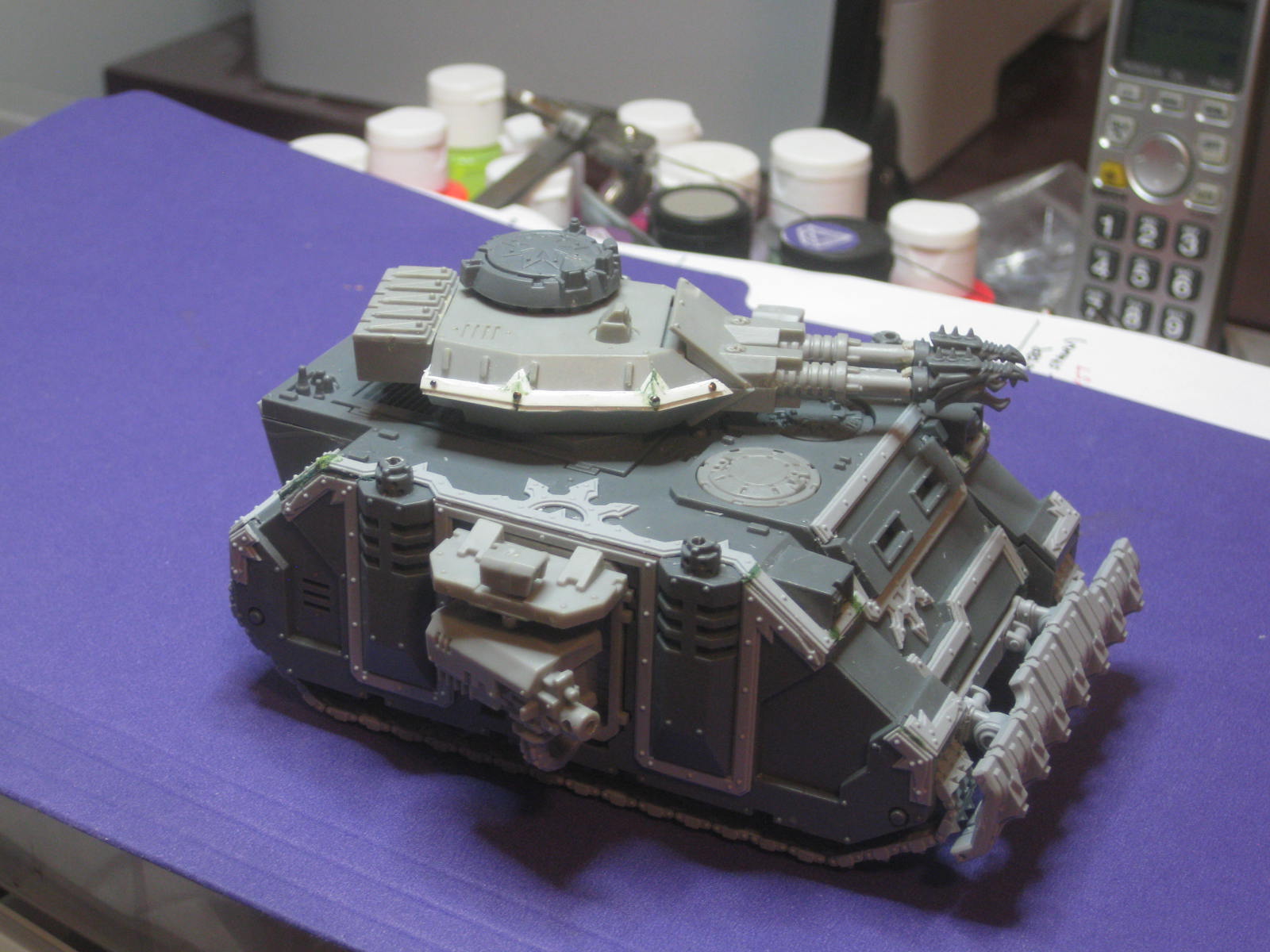 Here it is with the twin lascannons with heavy bolter sponsons.  Unfortunately, I used the lascannons in a previous conversion, but the bolters are magnetized for if build some new lascannon sponsons for it.

This picture also show off the trim I made with plasticard to try to make it match better with the trimmed rhino chasis.  I'm reasonably happy with it, though it is nowhere as good as the body trim kit that I bought - doing that little bit on the turret made me doubly glad I didn't have to scratch build any more of it. 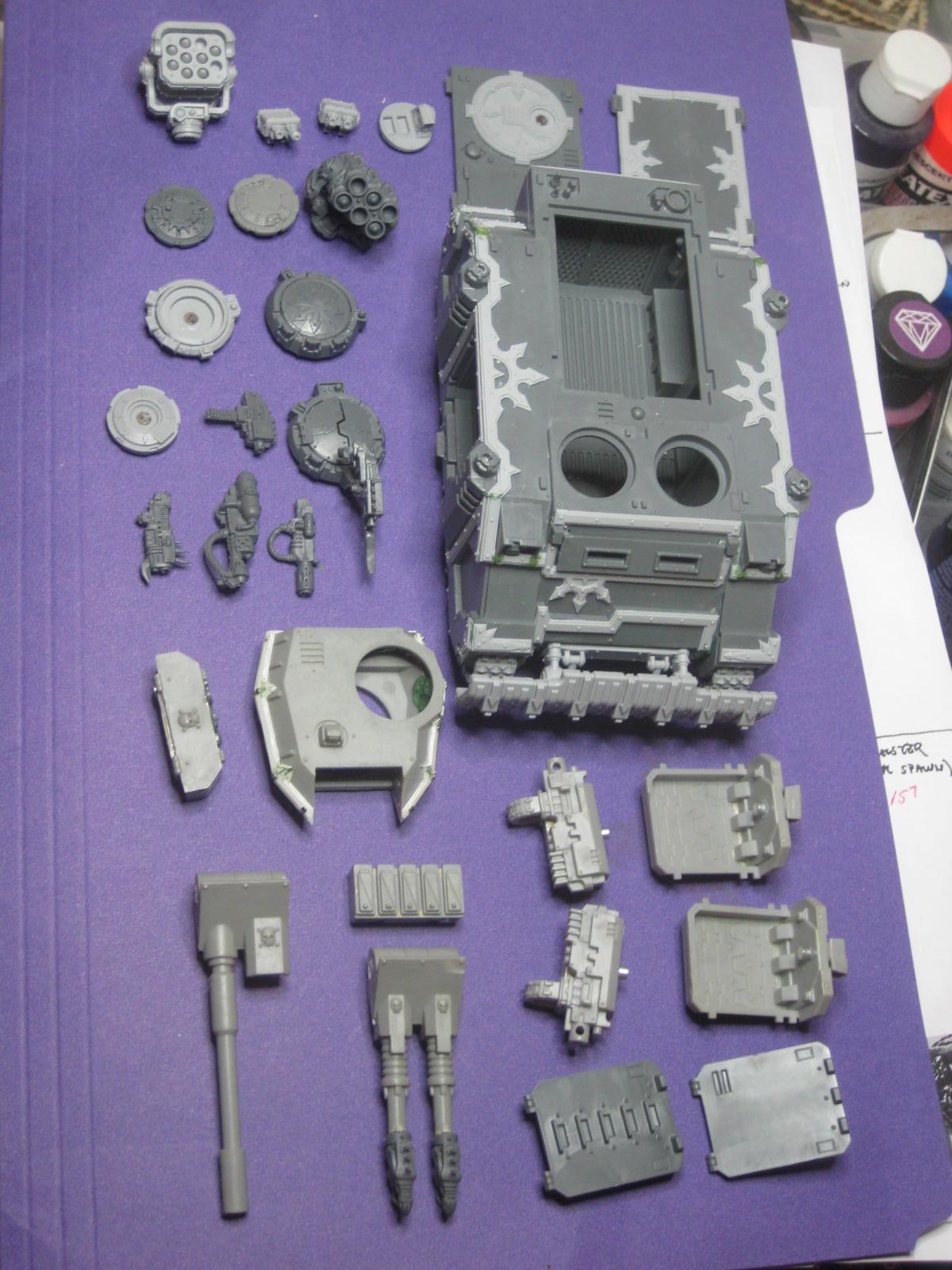 Finally, the chasis along with all of its bits.

They look very different so the work was worth it here, I like the plough in particular. These are really going to fit in once you've painted them up

Thanks - yeah, the trim really does help make it look like "heretic astartes" rather than just some loyalist vehicle with spikes.

Buying the chaos rhino kit has been the inspiration for another conversion I've had plans to do for a while - an emperor's children noise hellbrute - I hadn't decided the best way to get faces at the end of the blastmasters, until I saw the little gun muzzle heads on one of the the chaos vehicle accessory sprues. 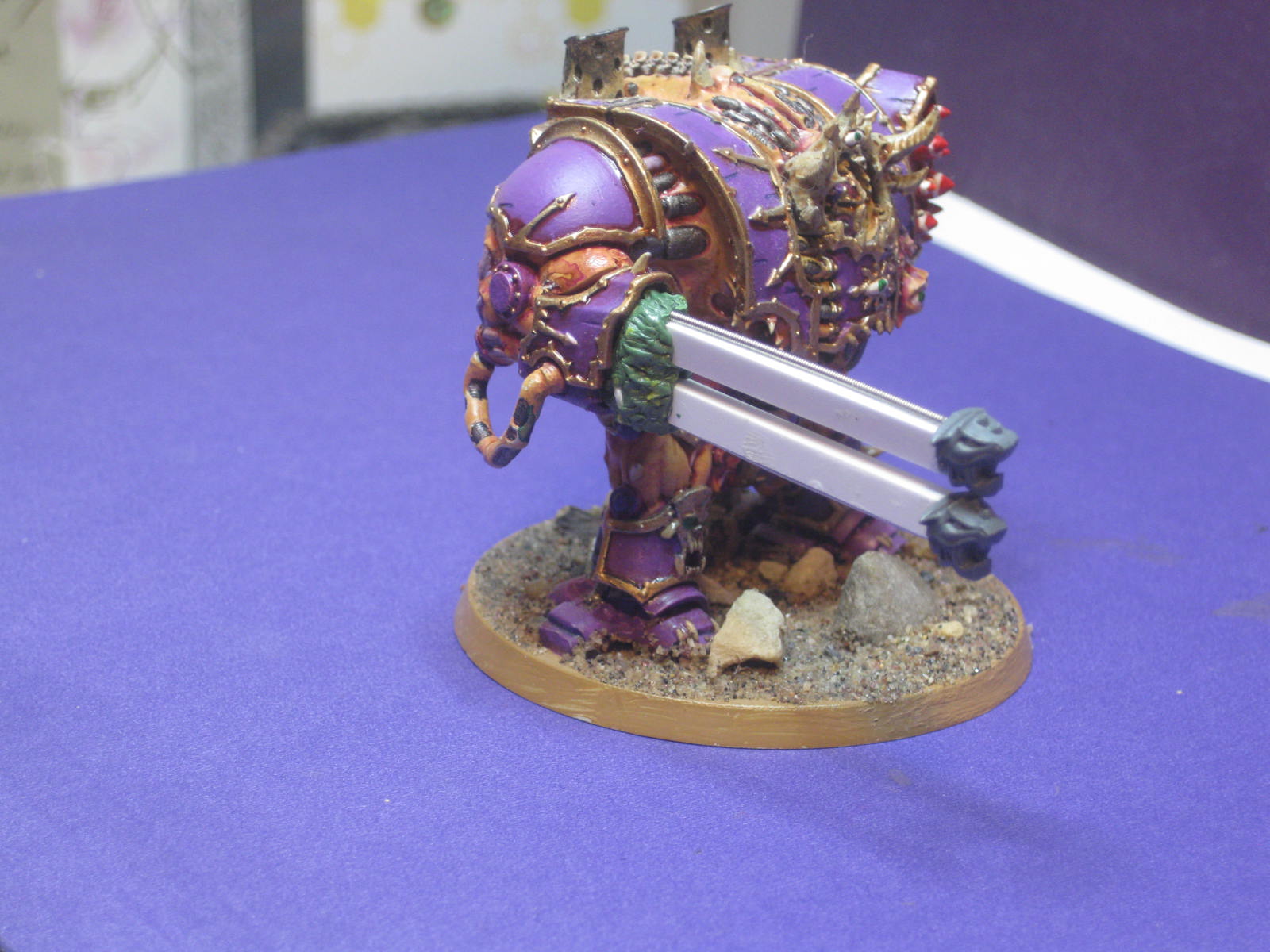 A simple but effective bit of conversion work - the best kind, nice work!

Thanks!  I'm having some second thoughts, as the mussels are quite different from those on the GW noise weapons and I think I could get them closer with a knife, some plasticard and some green stuff... I need to ruminate on whether the risk is worth the reward, so this may not be its final form.

I may also swap the coil on the bottom of the bottom barrel to the top, as it doesn't show at all where it currently is.  That's an easy fix, though.

I don't think the look is much of a deal breaker as they're visually sonic weaponry from the barrels? The faces are already well established for CSM in general so they definitely won't look out of place. Maybe see how you feel after a bit more contemplation before you take the knife to anything

Also tagged with one or more of these keywords: emperors children, conversion, dark vengence