To Walk in the Shadow of Gods

To Walk in the Shadow of Gods 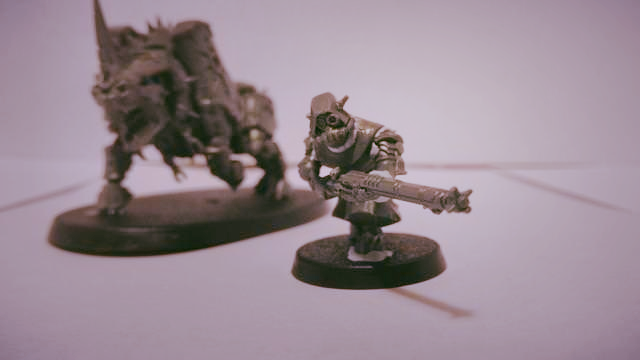 "This is I, the machine, manoeuvring in the Chaotic movements, recording one movement after another in the most complex combinations."

Liking the hunched pose of the peltast, really emphasises the bulk of the Juggernaut.

“They all look the same from up here.”

Attributed to Princeps-Primus Yuusha of the Legio Audax.

Nierehko Suul tugged nervously at the collar of his dress uniform. Although the noise in the hangar was cacophonous, a persistent, mechanical growl kept rising above the din, sending shivers down his spine. He could not see from whence the noise emanated; despite the size of the hangar, it was shrouded in darkness. Servitors and tech thralls skittered in and out of view, moving through the shadows, illuminated only briefly by intermittently placed lamps.

“Princeps Suul,” the clipped machine voice of Nu-13 addressed him. “Welcome to the Legio Audax.”

Nu-13, Magos Autokratoris of the Legio Audax, towered above him; a cyclone of layered robes and trailing wires that stretched up into the darkened heights of the cavernous room. He bowed respectfully to her, formally taking his place as a Godrider of the Ember Wolves.

A recent graduate of the Collegia Titanica, Suul had managed to run the blockade of Mars when the Twentieth Legion struck deep into the Sol System two years previous; escaping to join the war effort on the frontlines. Whilst casualties amongst the Warmaster’s Titan Legions had been high, he had nevertheless spent many long months bouncing around various relay stations and staging points before finally receiving his first command: the Warhound Titan Shurala of the Legio Audax. It was a strange name, a brutal tribal moniker that harkened back to the Legion’s ancient roots, but there was a ring to it that he quite enjoyed.

“Honoured magos,” he intoned reverently, “It shall be my privilege to serve the Legio and the Warmaster. I look forward to meeting my crew and interfacing with Shurala. Tell me, when can I know my moderatii?”

There was a long pause, as Nu-13 stared down at him. Mechadendrite tendrils slithered through the air in continuous, rhythmic motions, scattering off into the shadows and entertaining tasks beyond his ken. Nevertheless, the acid-green glow of her primary eye-lenses bore down into him, only increasing his discomfort. “Do you require moderatii?” she finally asked, almost seeming confused.

Suul blinked. “Well, of course", he answered incredulously. How else was he supposed to command Shurala in the heat of battle? Weapons and motive functions needed to be delegated to the other crew members, as to allow him his full focus.

There was another silence following his words, as if Nu-13 did not comprehend them at all. He tried to hold her mechanical gaze, but there was something increasingly disconcerting about the magos. “I see,” Nu-13 replied at last. “If that is your wish, then moderatii shall be requisitioned for your use.”

Suul bowed again; he was uneasy and feeling the need to flee the increasingly uncomfortable hangar bay. Not wanting to question just why there weren't already moderatii assigned to him, he made his excuses and turned to retire to his quarters. Besides, the machine growl that had plagued him since upon his arrival was only growing louder. Yet even as he left, it continued to echo painfully in his ears. 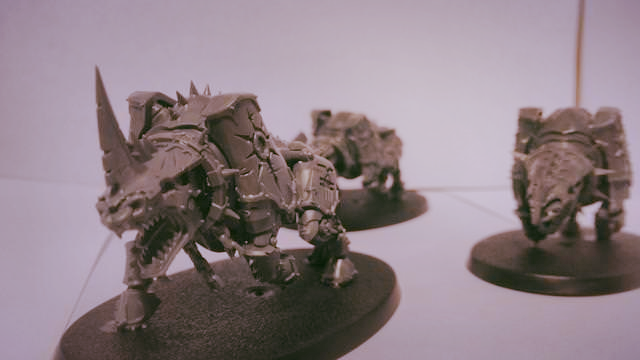 Juggernaut Murderpack of the Legio Audax, the Scouring of Rhanda 012.M31

Whilst entirely non-existent in the Great Crusade and early days of the Horus Heresy, by the time of the final traitor offensives into the Segmentum Solar, Juggernaut war machines had become a common sight amongst the Warmaster’s forces. Hulking mechanical hounds, with a bestial intelligence seemingly all of their own, they were used to great effect by the XII, XVI and XVII Legiones Astartes, as well as the indentured secutarii forces of the Titan Legions Audax, Mordaxis and Vulturum.

Liking the hunched pose of the peltast, really emphasises the bulk of the Juggernaut.

Thanks! Skaven bodies pop up now and again in Dark Mech skitarii conversions and they really gel with my ideas of the Dark Mechanicus aesthetic, so I'm shamelessly stealing it! I love the hunched, downtrodden and mutated look it gives them - very Chaotic. There might be some more trimming and conversion work to be done before I'm happy with it, but I'm liking this first test fit

I have two squads I'd like to put together for my first vow or two for the upcoming ETL competition, so hopefully I can get them all ready next week.

Now I know where I am going to "borrow" stuff for my own part of the Ember wolves.

The Silence below - Dark Mechanicum 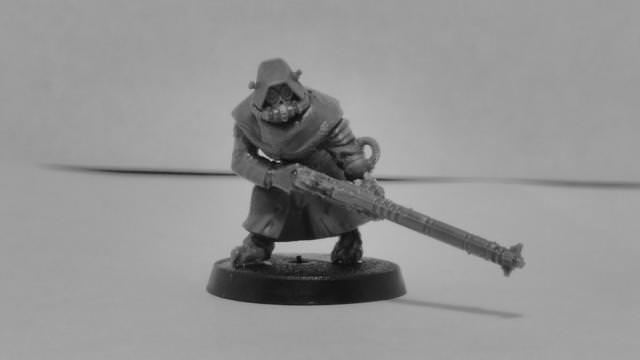 Note: Getting a bit more comfortable cutting, filing and using green stuff (first time for everything!) and I really like this guy more than the first peltast I made. The proportions seem a little better and the pose is more natural.

Now I know where I am going to "borrow" stuff for my own part of the Ember wolves.

Thanks! I'm looking forward to seeing your Warhound! I'll have to do that side of the legio a bit vicariously

Good work on the Peltast! As you say, more natural pose and proportions but still very retains the creepiness you want in a Dark Mech mini.

My Plog - Tales of a Lazy Hobbyist

Also tagged with one or more of these keywords: ETL VI, Dark Mechanicus, 30k, Horus Heresy