217 replies to this topic

Welcome to the Deathwatch Outpost. Deathwatch belongs to the “Forces of the Imperium (IFOR)” Faction.

Here you must also post your “before” and “after” pics of your vows as well as any WIP you may want to share. You may also use this thread to discuss the progress of the event with your fellow participants, exchange ideas, offer and receive modelling/painting advice and generally have some ETL–related fun!

Here you’ll be able to submit vows that include the following units:

IMPORTANT NOTE: THE MIGHT OF THE IMPERIUM
As mentioned in the main rules, participants who pledge for Deathwatch will also have the option to pledge units that correspond to any other IFOR Forum as well! However, the units pledged from other IFOR Forums may never be more than the units selected from the list above.

IMPORTANT NOTE: ALWAYS USE THE LATEST PUBLICATION TO SELECT AND PRICE YOUR UNITS
This means that the Index lists are good until the Codex is released (in which case the Index list becomes obsolete and cannot be used by anyone). Also, FAQs that come in the wake of a particular Codex (or other publication) take precedence over the Codex (or other publication). Also, any PDF releases by either Games Workshop or Forge World are also admissible (even if experimental) until an official publication that contains them is released.

I guess, you're all waiting for the new Codex eh? Well, I cannot fault you.

I guess, you're all waiting for the new Codex eh? Well, I cannot fault you.

I'm itching to start painting to bolster my existing Deathwatch before the Codex drops but it is too imminent.

I, WAR009, rise to the challenge of E TENEBRAE LUX on the side of the IFOR and vow to complete the following units- (Pre Codex)

for a total value of 489 pts on or before August 1st, 2018. Success will bring me eternal glory and failure will doom me to wear the Badge of the Oathbreaker until the end of the year.

the painted tarantula not part of the vow.......

Actually I would tack my DW here but I think all of them are already beyond "single base coat" since I did basecoats on all the details too.

Do you guys think you'll beat the Custodes? I mean once the new Codex hits the shelves?

Do you guys think you'll beat the Custodes? I mean once the new Codex hits the shelves?

Unlikely.  Custodes are a fantastic codex and will be tough to beat on pure WAAC flavour-of-the-month status, and early spoilers on DW don't look to change them beyond being yet another Marine codex with a bit of flavour adjustment.  Don't get me wrong, I love DW and the related background, but it'll be tough to compete with Custodes ease of painting and competitive edge.  Not to mention C:  DW 8th edition looks to be going all in on Primaris Kill Teams, which will likely have a backlash with the DW Veterans/classic Marines faithful.

Spoilers:  I'm not vowing for DW this ETL, regardless of what the codex says

Well, a bit defeatist... but I hear you. Now will the DW fanatics prove Vel wrong?

I've fought Custodes with two different armies and they are tough as nails. With T5, 3++ and a truckful of wounds I'm not sure how to get rid of them, didn't kill one until turn three in my last game!

Anyway, with the new Codex coming up I was waiting but I have this squad of Terminators sitting on my desk staring at me screaming "PAINT ME!" so a small wafer thin vow to get started.

Following the detection of a Xenos uprising within the forum, I vow to paint the following by August 1st to bring the Emperor's cleansing fire to one and all or suffer the mark of failure!

There are many more Deathwatch chilling in the strike cruiser for when the Codex drops!

Well, a bit defeatist... but I hear you. Now will the DW fanatics prove Vel wrong?

Nothing would please me more

Well, I mean, a plastic Warhound Titan would please me more but I'm trying to be realistic here

Well done sir, and good luck to you! And keep in mind that for every DW unit you pledge you may pledge a unit from another IFOR Forum (so if you want to add some Custodes in your Force - just saying...)

Come on you Alien Hunters! I want to see fierce competition from you lot, we have so much variety this year, I want a fierce fight from even underdogs like you! 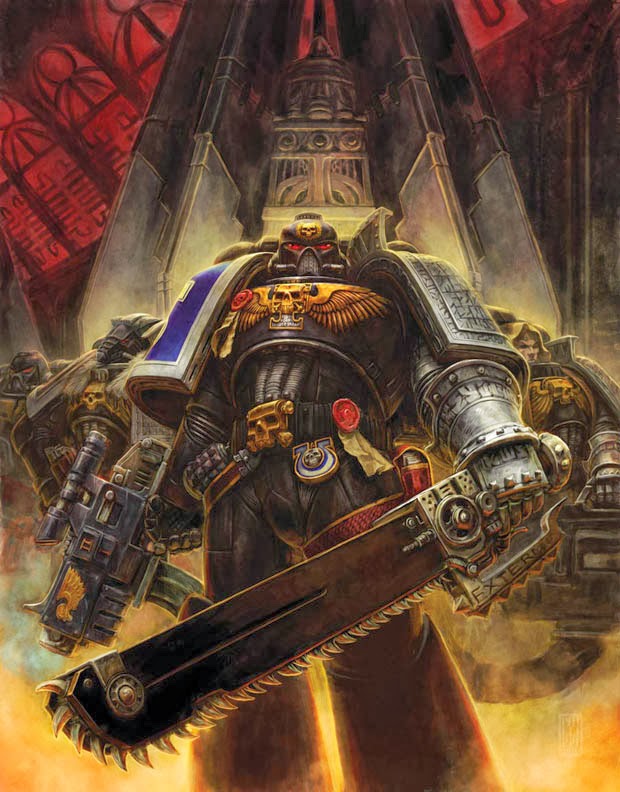 So today the new Codex goes on pre-order then?

My kill team is awaiting Primaris reinforcements, but I wanted to vow something to get the ball rolling. To bolster my Deathwatch force in this vulnerable time the noble House Kolossus have offered the services of their Knight Armiger Depth Strider and her capable pilot. Even now their Sacristans are tirelessly working to prepare her for duty.

I am new to the forum and to the ETL so please forgive me if I get anything wrong!

I LilNath rise to the challenge of E TENEBRAE LUX on the side of the Deathwatch and vow to complete one Knight Armiger Warglaive armed with a Heavy Stubber of total value 227 pts on or before August 1st, 2018. Success will bring me and my watch eternal glory, whilst failure will mark me as an oath breaker and traitor.

Really excited for this! Look forward to seeing more action when the codex drops

-Suffer not the alien to live-

@ Moosstick:I don't have yet access to the new Codex (pre-ordered it) so not sure about the units' structure but according the the Index the Termies come in squads of 5-10... May this has changed in the new Codex or, if not, you can rearrange them in two squads? Let me know what the case is.

Update for week 1 Finally added my before pics

Tarantula that is slowly being painted is not vowed as it was further then allowed to be.

3 of the vets are built and ready for primer along with watch captain, and razorback. Tarantula needs to be soaked  to get rid of release agents and then ready for primer

I take it, no change in points? Like Sergeant premium or something? In either case let me know.

Now we're entering the last 24 hours before the First Weekly Update (out Wednesday). Let's see some more joining up until then!

Haha, I should've used the index values for more points! But yes, there are no differences in point cost compared to my first post. Still 745 pts total.

THIS IS THE CUT-OFF FOR THE WEEKLY UPDATE - EVERY VOW OR COMPLETION REPORTED BEYOND THIS POINT WILL COUNT FOR NEXT WEEK'S UPDATE.

I thought I'd upload some WIP pics of my Armiger:

Just the weathering and base to go now. I'm hoping it will stand out in a sea of black and silver! The paints are looking super thick between the gloss medium and the 'Ardcoat, but ah well. Great job War009, that's a good vow you have going there. Would love to see everyone else's progress.

-Suffer not the alien to live-