How to commit vile Tech Heresy! A tourists guide to Xana II

140 replies to this topic

Further blasphemy is on the cards soon with project 'build a better Armiger'. (Just need to sacrifice a few virgins (they're in short supply around here) in order to get the parts).

The attention to detail and execution is something to behold; absolutely wonderful work and thanks for the top-notch photography. Yep, you just cemented that I need to get an Atrapos to anchor my future Mechanicus Knights.

The attention to detail and execution is something to behold; absolutely wonderful work and thanks for the top-notch photography. Yep, you just cemented that I need to get an Atrapos to anchor my future Mechanicus Knights.

The photography is a bit of an experiment having just received a camera. Need a lot of practice and definitely some better lighting, but we're getting there!

The Atrapos is... fantastic. It's a points sink, but I think Renegade lists benefit from it especially. We've no access to wargear like the Paragon Gauntlet, and the Atrapos Las-cutter is the best alternative. You get a cheeky bonus rule on Heretical Atrapos too for a built in -1 Ld aura, which stacks nicely with our Relic for a -3 aura. Slap a 6+++ Warlord trait on it, and you have a powerful, tanky HQ which can also summon any flavour of daemon (which it can provide bonuses to) thanks to counting as a Chaos Character.

Little hobby update to cover the time we've been away. Mostly some more photography experimentation (I need a light box really), but a little bit of painting too, including a very very obvious Hellwright on Dark Abeyant... 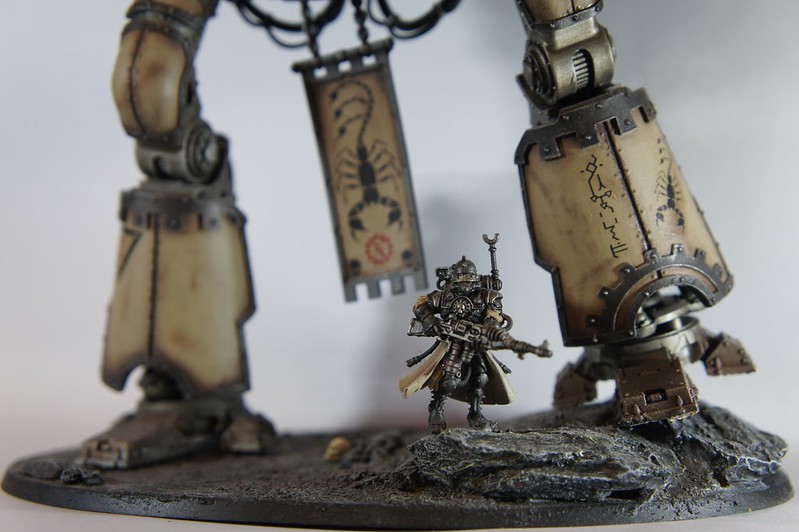 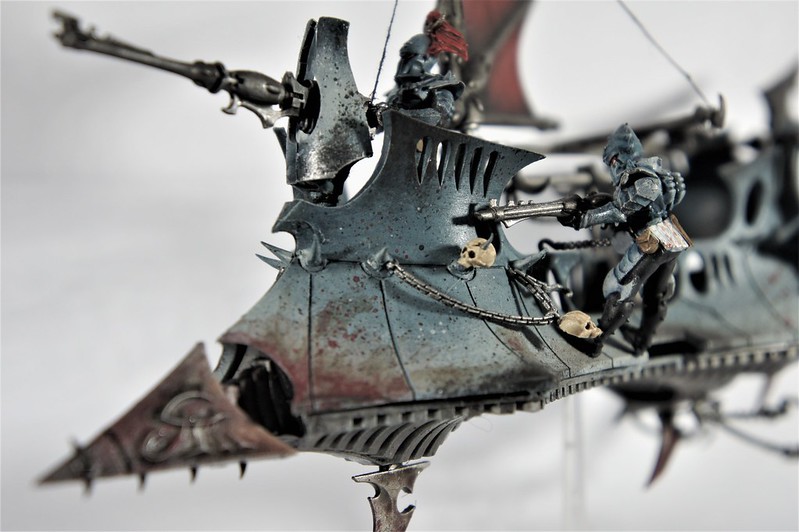 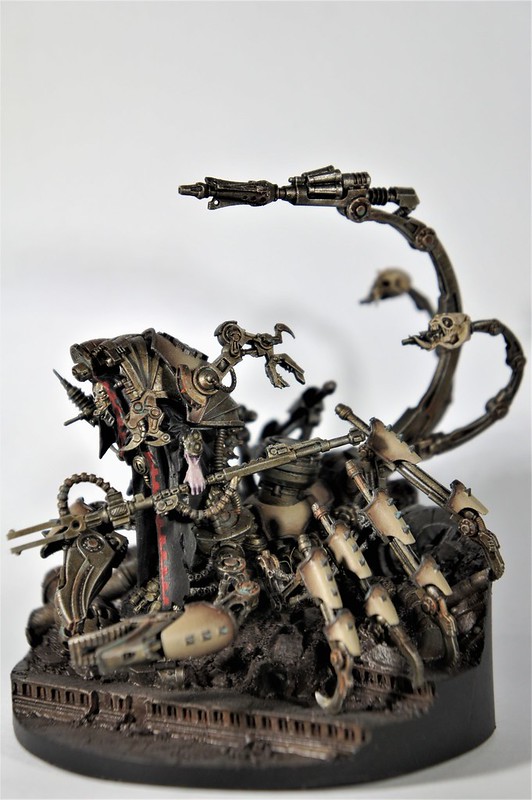 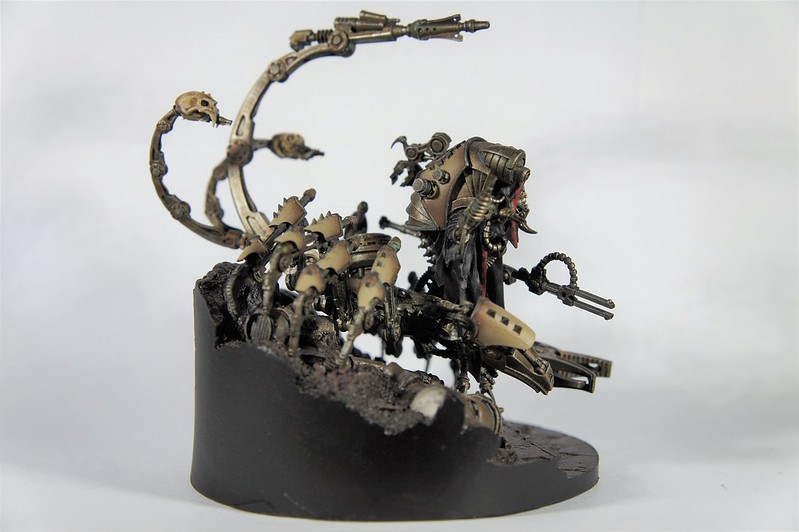 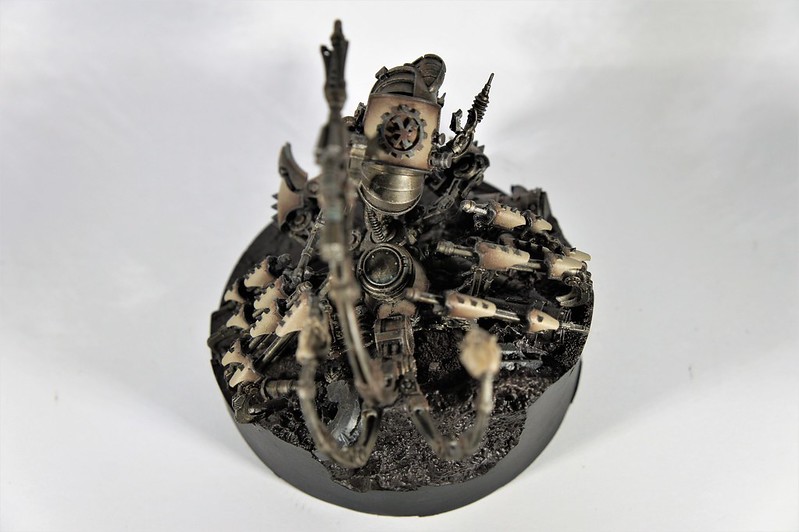 I love this blog.

The Dark Mechanicus chap Scoria looks suitably scary, I like the gradient on the armour panels and the old beaten metal. The Vanguard on the Knight base looks great in those colours too. I need to improve my photography as well but you're getting great quality pictures so far so I'm curious what improvements a lightbox would make. I am tempted to get one myself at some point.

I think the point of a light box (forgive my lack of photography knowledge here) is basically to make lighting more consistent? I got some cheap lamps with daylight bulbs, but I'm still getting a fair amount of shadow cast on to the taped-together A4 paper backdrop I'm using (no expense spared there!)

My impression is the light box helps soften that harshness from the bulbs.

I'm struggling with the light situation currently since my main light is an led desk lamp that isn't a daylight colour. I also cluster various torches and stuff nearby but it's pretty primitive. I can use the tool to remove a colour cast to fix most pictures when I'm in Photoshop Elements but I understand with a cream coloured army getting the colour accurate is probably a lot more important than with my models.

The light boxes that have light built in look really convenient but they don't seem particularly cheap. It might be worth it just to help eliminate shadows from my pictures. Sorry, I've kinda dragged this a bit off-topic. I hope you don't mind though.

How long did it take you to build and paint Scoria? It looks like a very fiddly model but like Cawl, very rewarding to complete.

It's fine buddy - I'm keen to learn about the photography side of things as I'm new to it, and it's a hobby blog-type-thing, so I don't think you're off topic

Scoria wasn't too bad really. It looks fiddlier than it is. There were fewer components in the kit than I had expected, so the whole thing was put together and painted in 3-4 days, just working on it for a couple of hours here and there. There isn't too many different colours in the Xana scheme, so even the bigger stuff like the Knights I find you can get done very quickly once you've gotten used to the colour scheme.

With regard to lighting, the two I'm using were designed for desktop photography, and came as a pair for £20 on Amazon. They're basic, but they seem to work - I certainly can't complain at that price. You're quite right though - normal household lighting is a lot more 'yellow', which means the 'bone' colour get's affected really badly both when taking pictures, and when painting. I really need daylight for the latter :/

Oh dude your Scoria is beautiful.

Xana stuff makes me wish I'd painted my 40k Ad Mech in the bone...

Honestly though, I think it's more that it's just such a lovely model. I suspect you could tip in tar, then roll it in feathers and that sculpt would still end up looking good!

Honestly though, I think it's more that it's just such a lovely model. I suspect you could tip in tar, then roll it in feathers and that sculpt would still end up looking good!

I'm sure I could find some way to ruin it.  Conversely, your paint job is excellent

The subtle creme armour plates with the dull, greasy metal really pulls together that "ancient but functional" feel.  It doesn't hurt your basing game is on point, either

This week, the hell-forges spewed forth a great blasphemy: 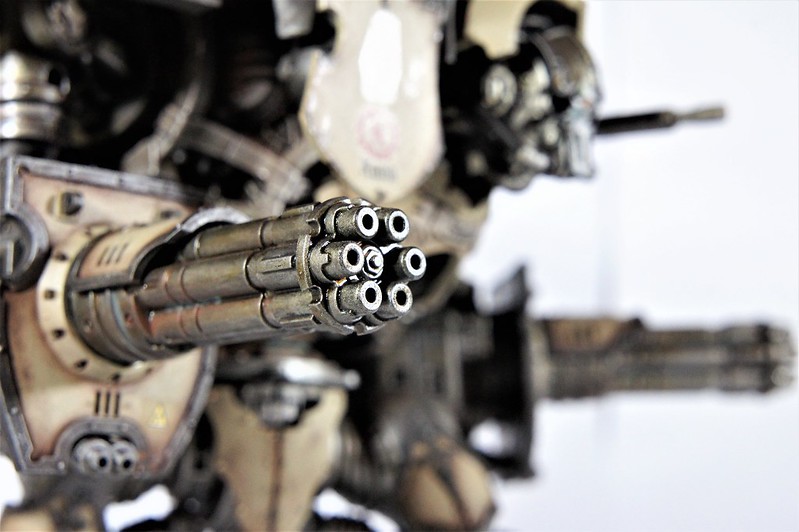 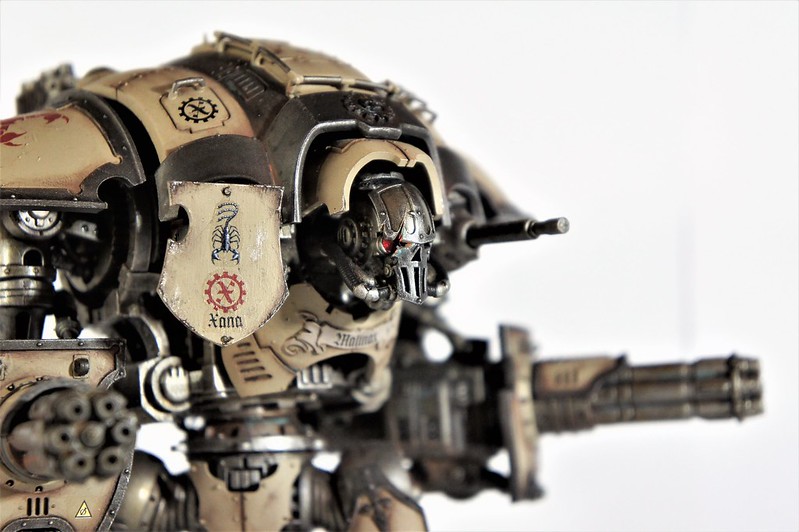 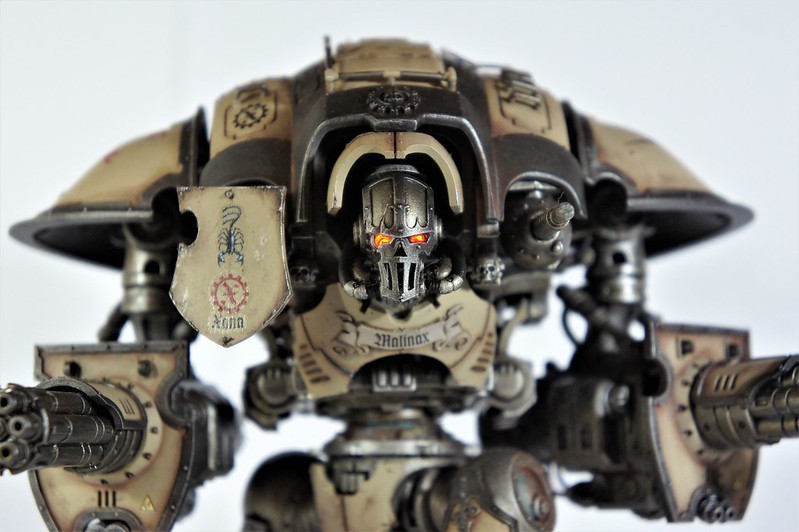 And in the warp, there was much rejoicing: 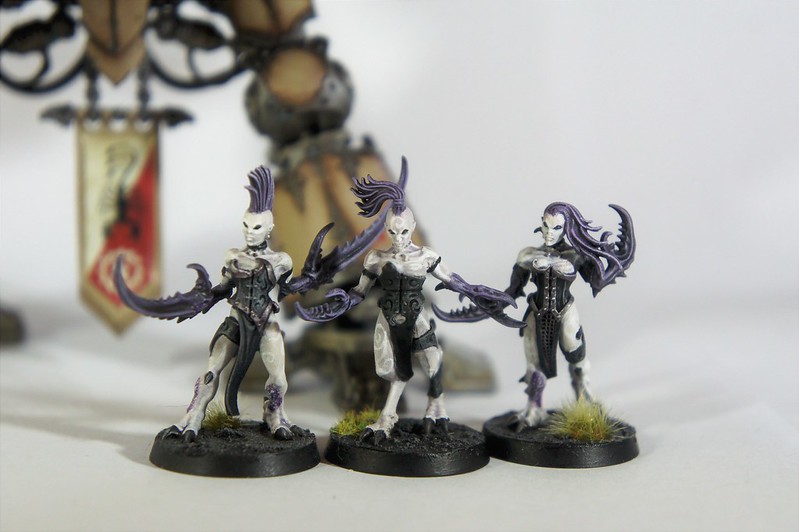 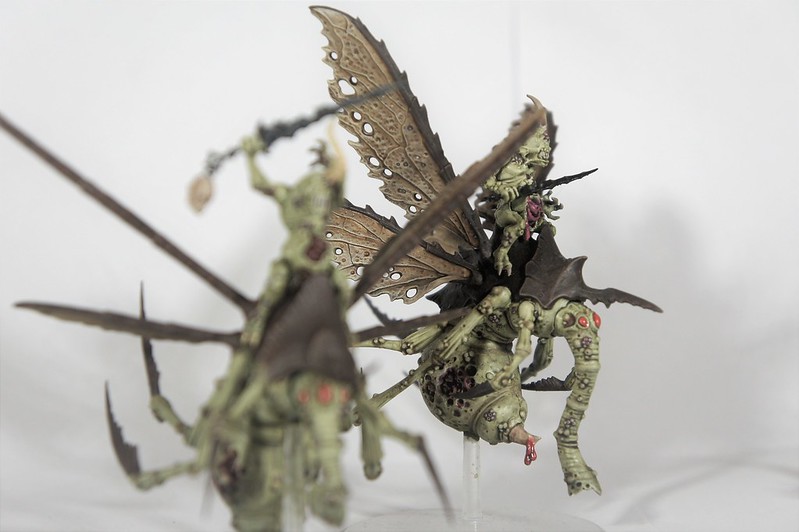 (Daemonettes, we have learned, are not just

on the tabletop... they are

to paint too! Easily the hardest miniatures I've attempted so far to get to a standard I'm remotely happy with :/ )

Nice work. The led colour is well picked, it gives a really intimidating infernal appearance. Not something to mess with.

That Knight is amazing, really high quality of painting throughout this log.

I completely agree regarding the Daemonettes, I just couldn't get a good result with mine, all my ideas just ended up looking dismal once paint hit plastic.

Certainly a tasty dose of heresy, here!  I love the "scarred faceplate" look on Renegade/Chaos Knights and the lighting adds even more to the effect.  I'd also agree that Daemonettes are a royal pain to paint (got a pile for AoS in the wings) but the results are worthwhile.

It's definitely the skin tones that make them such a challenge. I'd love to pick up Zarakynel - the models nice, and the she puts in some work on the tabletop (though I'm not sure she's very healthy in terms of points now), but the idea of painting her terrifies me... O.o

What a remarkable paint job on the knight. Simply wonderful. Top marks milado

The Orange LEDs are superb.

HERESY!!
Do I have your attention? Excellent!
It's been a while, (the humans discovered where I buried the dog, so I've been on dry food for weeks... Seriously, they think they own the place). I figured it was time to show you loyalists the latest horrors that the hell forges have birthed!
Behold! The Renegade Warglaive: 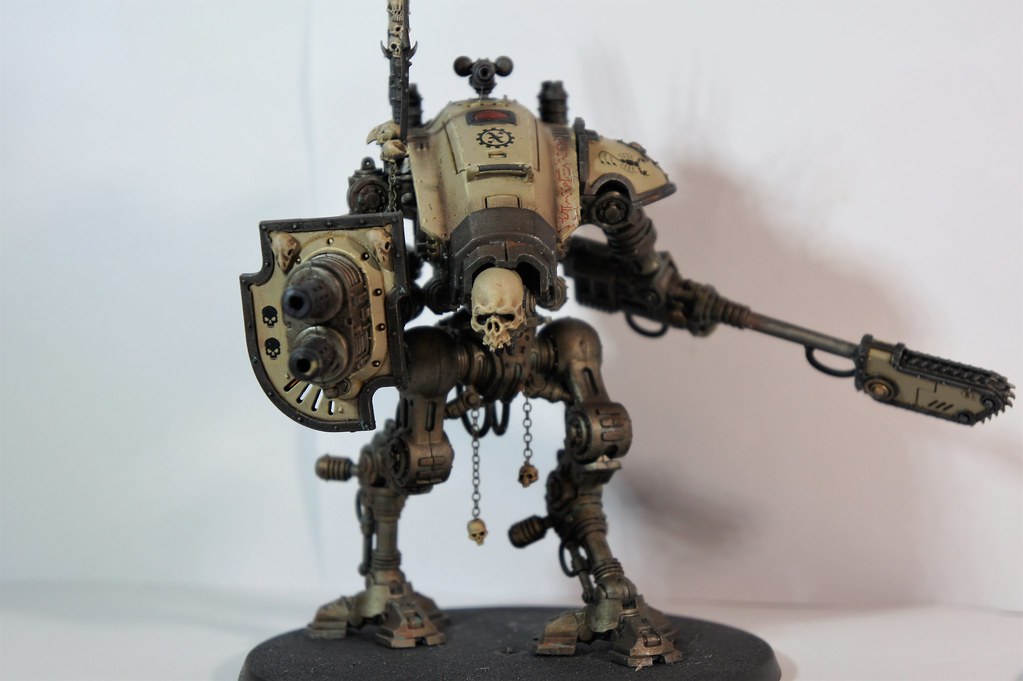 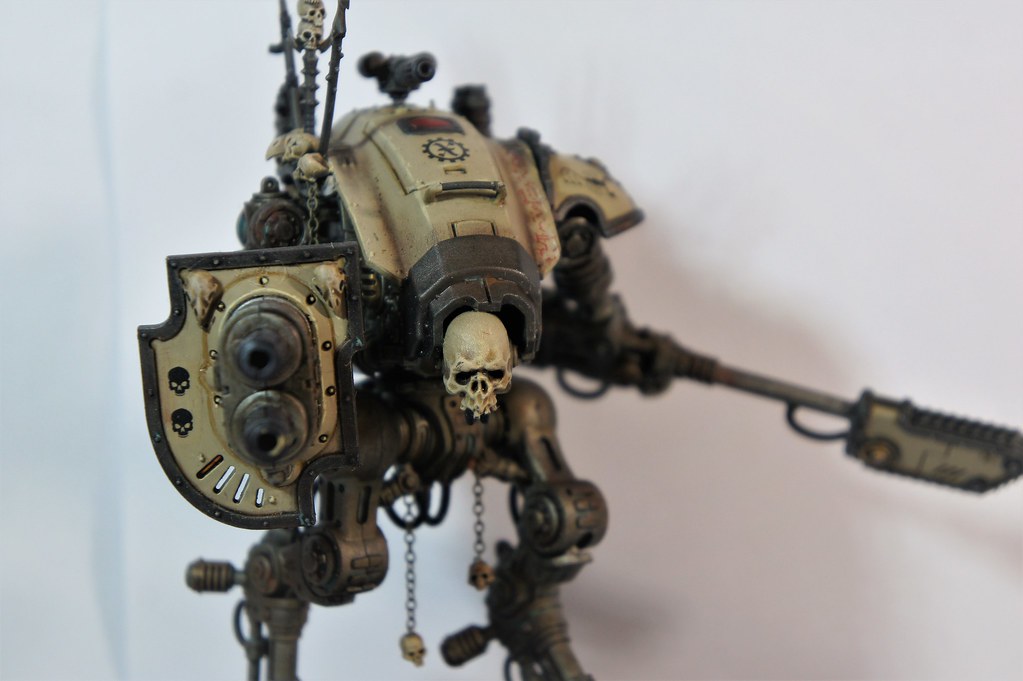 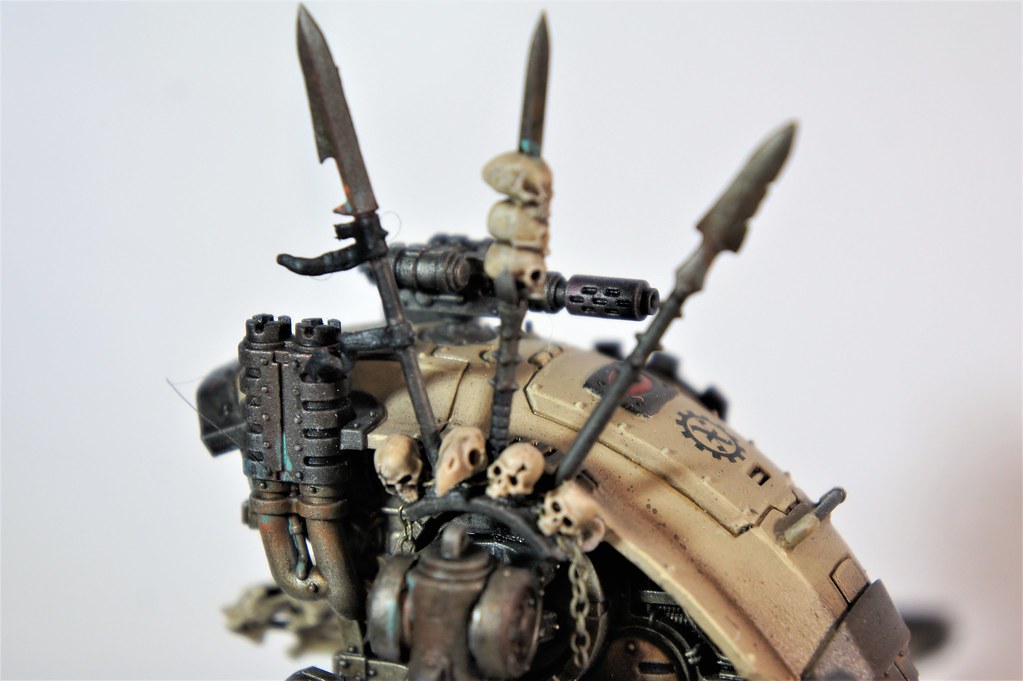 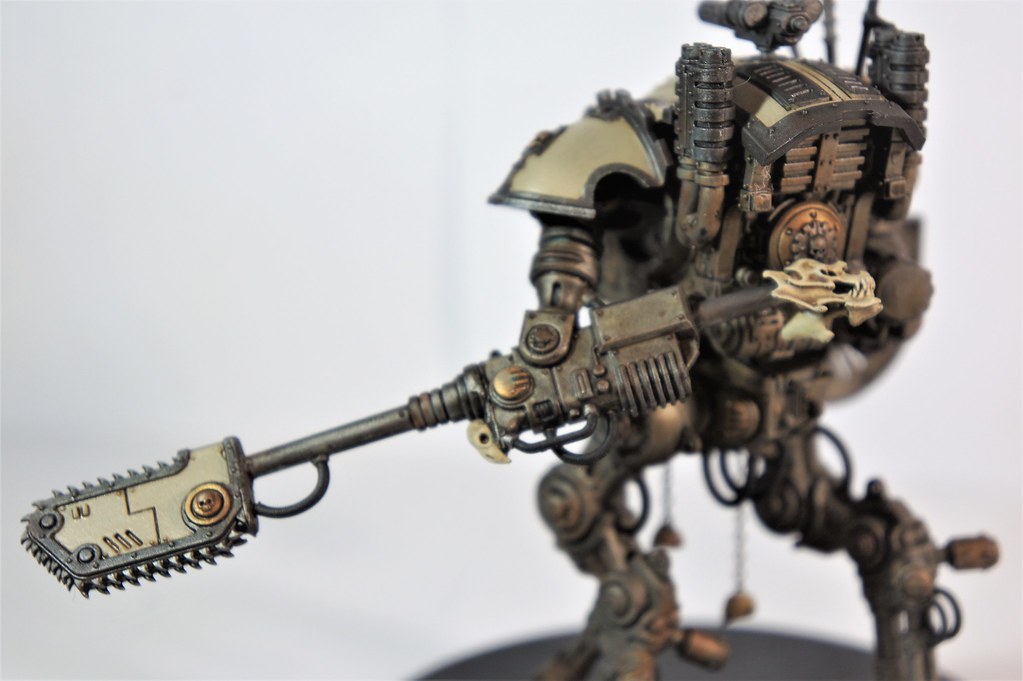 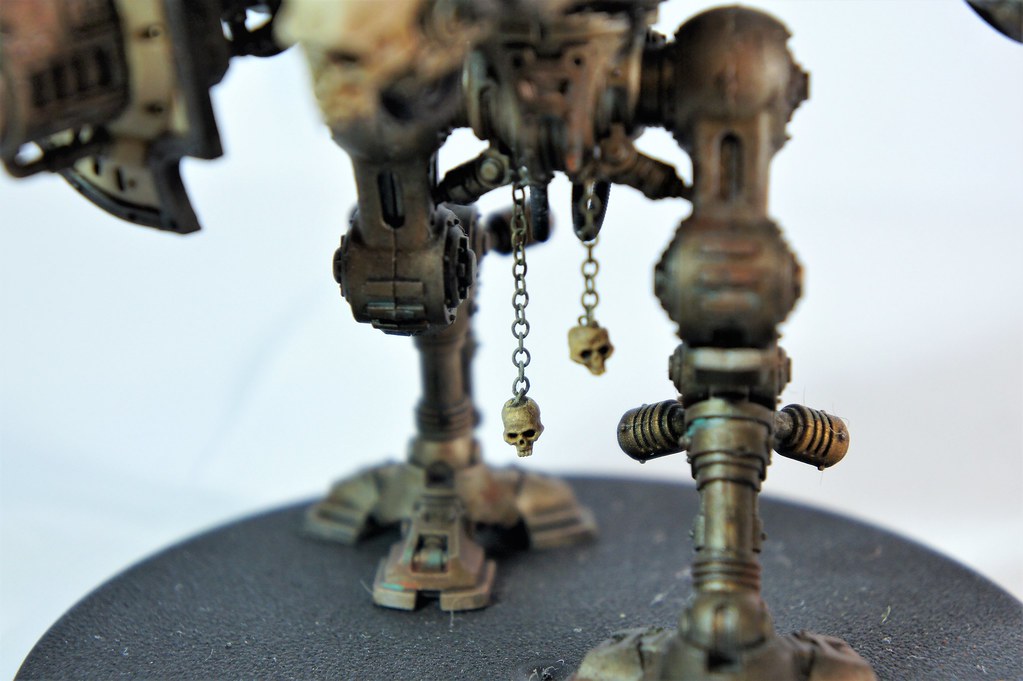 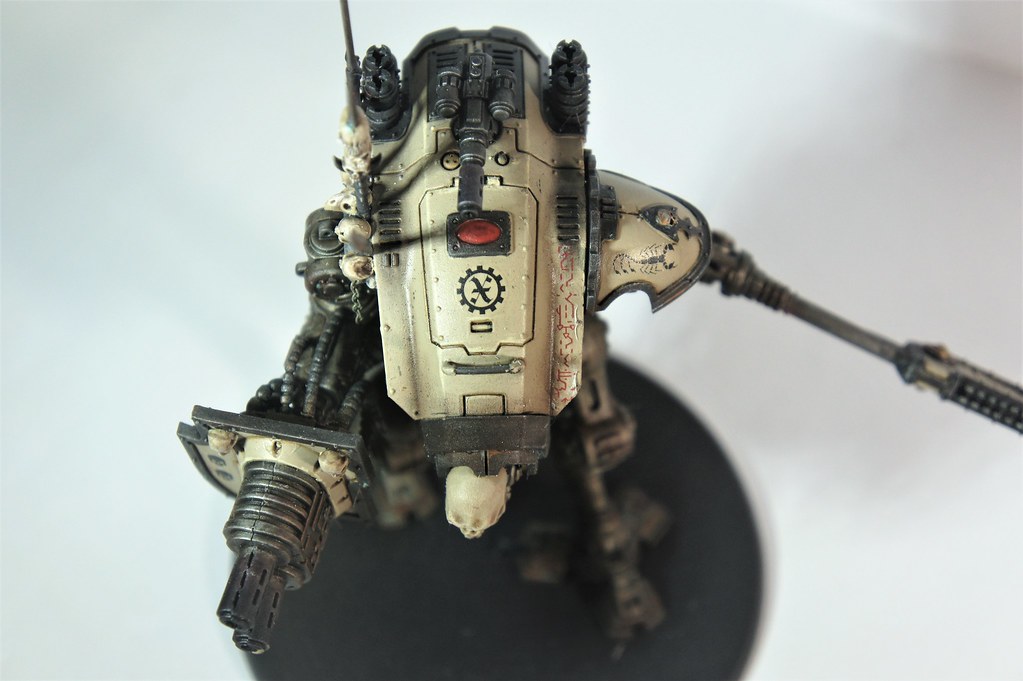 I can see that you are trembling in fear already. You should know that, our overwhelming technological superiority also grants 0.01 extra damage on the table top (and we don't even clear it with our opponent - that's just how deliciously evil we are). What does this mean in practical terms I hear you cry? Absolutely nothing! But it's still 0.01 more damage than you lot with your fancy strats and household traits have!
So loyalists, while sleep flees from you this night after seeing such horrors, remember: Cats rule, dogs drool, and death to the false Emperor!
Meow for now.

Great work as always, the extended glaive looks like it will fit in well with the Lancer knight. I have noticed in picture number three that there is a hair by the knight's engine stack. I suppose I'm surprised there isn't more fur stuck to it in retrospect!

Awesome design. Really builds on the lancer theme. Replacing the shoulder with the gun shield is a great idea.

Great work as always, the extended glaive looks like it will fit in well with the Lancer knight. I have noticed in picture number three that there is a hair by the knight's engine stack. I suppose I'm surprised there isn't more fur stuck to it in retrospect!

I too see this hair... clearly some kind of sabotage! Excuse me for a moment, there are beds I need to mistake for litter-trays...

Awesome design. Really builds on the lancer theme. Replacing the shoulder with the gun shield is a great idea.

Thanks Charlo. I can't take credit entirely as the conversion partly takes inspiration from parts of other models I've seen around. In combination though and with some other changes, I'm quite pleased with the result.

The gun shield accidentally gives a great kinda 'spear and shield' effect right? Just wish I liked the Warglaive more on the tabletop!

While we are on the subject of... What were we talking about? No matter!

I have been using all of my feline cunning to craft a devious list, and would appreciate hearing the howls of despair (or you know, constructive ideas to improve it - it's a bit of a rough sketch right now) of any of our lovely community who care to comment