Having more or less completed an army of Emperor's Children and Sons of Horus, I decided it was about time to have some loyalists! And what better loyalists than the stalwart sons of Dorn

I decided to theme the army around the siege of Terra. So all the bases of my IFs have white stone tiling to represent this. The color also contrasts nicely with the dirty yellow of my miniatures.

For the list, I tried to keep things thematic: a Leviathan made sense (secretly developed on Terra, so IFs should've been among the first to get one). This bad boy is magnetized and I gave him a mixed load-out in order to have flexibility gaming-wise and be an all-around threat. If I get a second one, I might specialize their load-outs, I don't know. 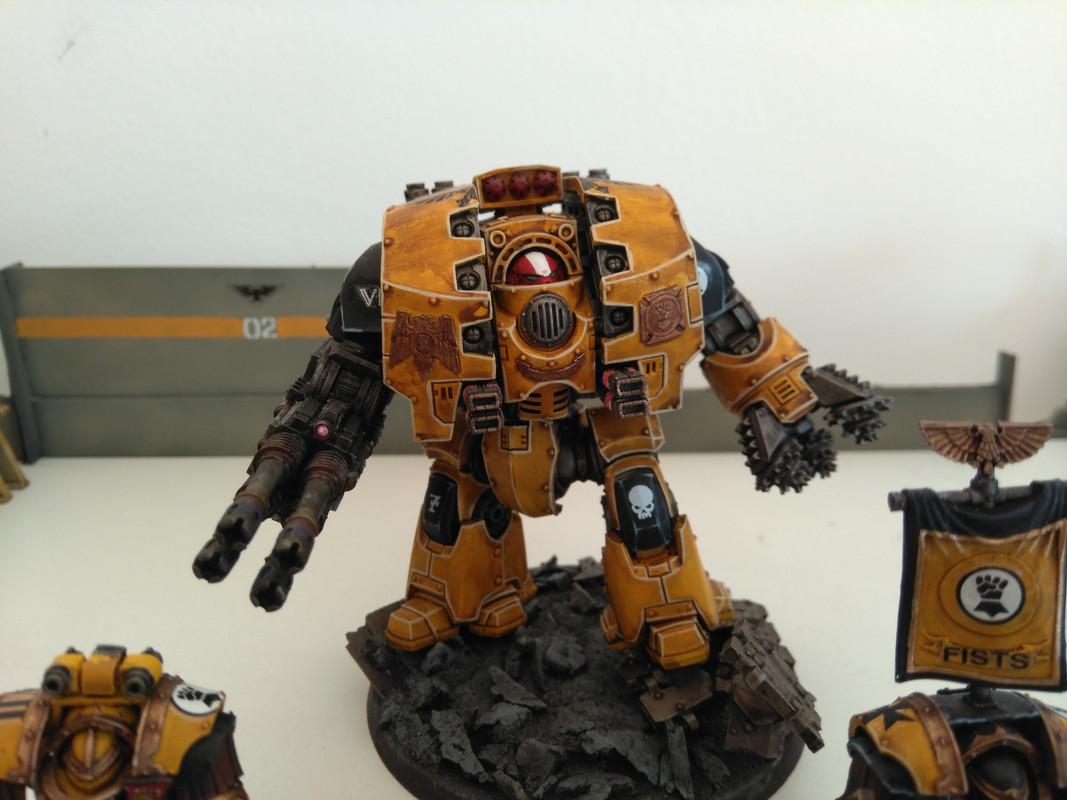 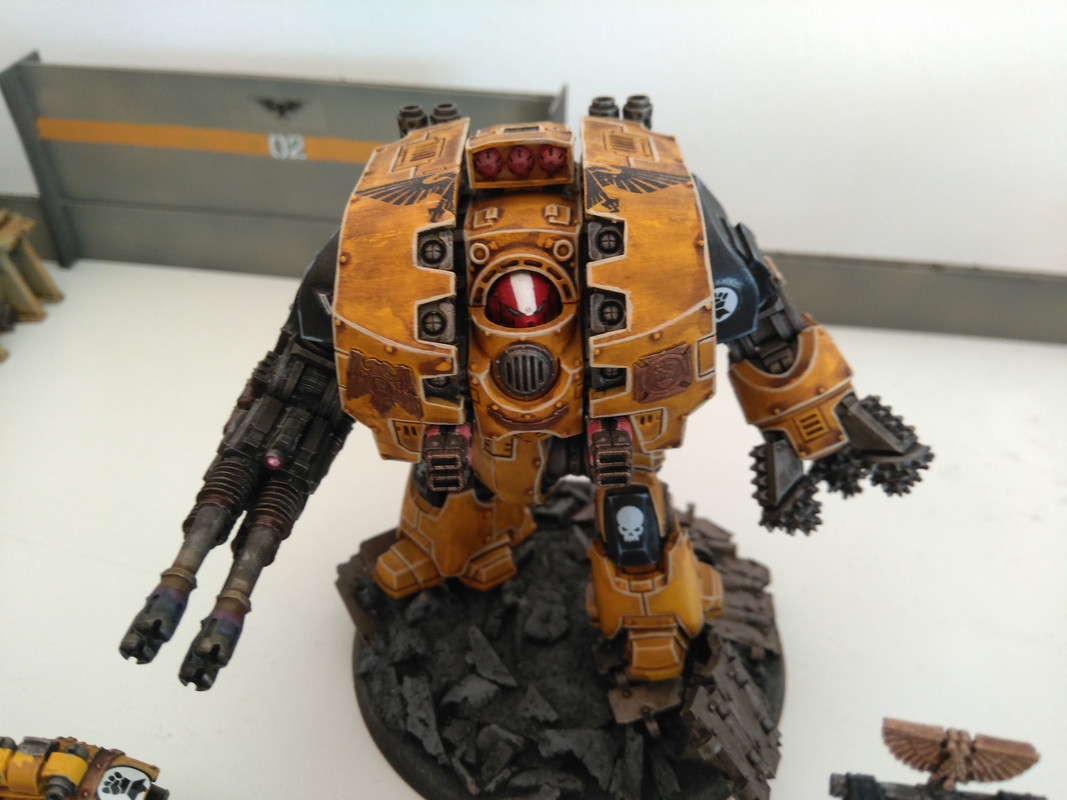 Then, the start of my Breachers. No explanation needed as to why a Fists list needs Breachers

It's WIP: The two guys without bases are waiting for their decals. These guys are Second Company (as denoted by their shield decals). Sergeant has fancy MkIII artificer plate on top of his MkIV legs and helmet. I hate mixing and matching armor marks but I didn't have the parts to fully deck him out in MkIII

For the helmets, I am going with what is shown in the Red Books. next 4 breachers will include the two special weapons. They will be magnetized of course, and I think I will initially give them meltaguns. If anyone has good feedback on using certain types of special weapons on Breachers, I'd be very interested in hearing about it. 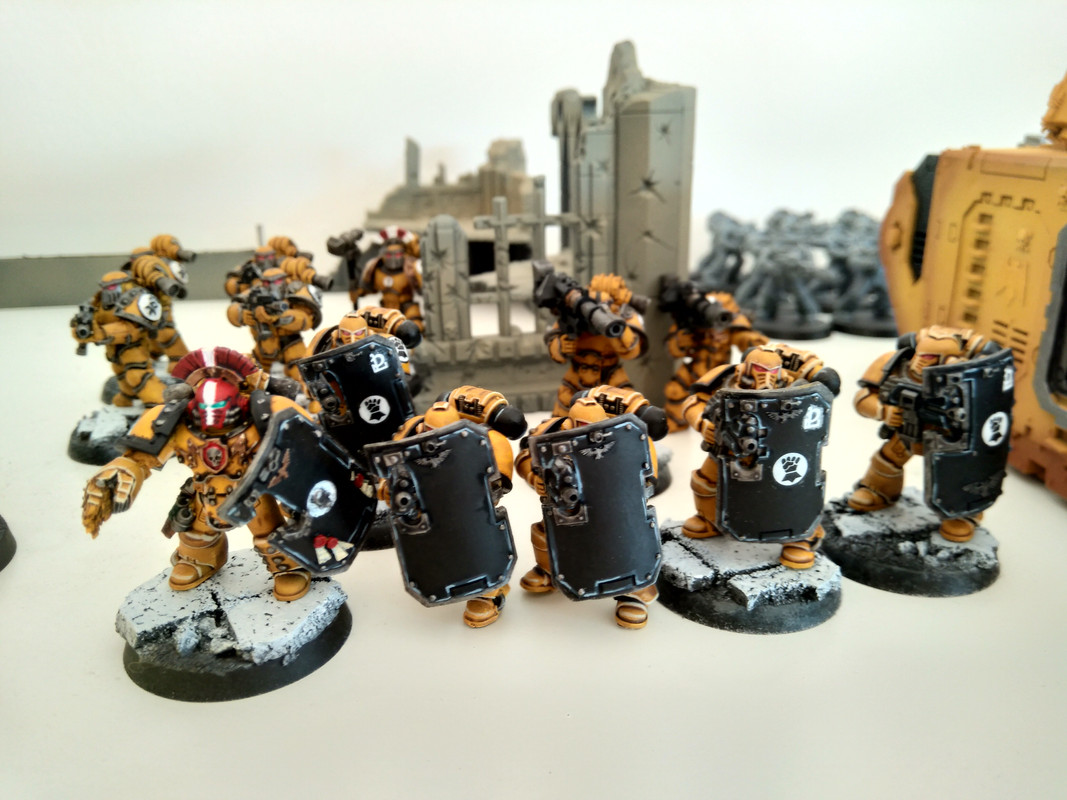 Two squad of Cataphractii Terminators. I love 4++ and I think it makes sense fluff wise that Fists would prefer hulking slow Cataphractii's than the more agile Tartaros that I would imagine would fit right with Blood Angels or White Scars. It's all subjective of course, but this army is about MANNING THE WALLS OF TERRA and being defensive! I wanted one squad with Storm Shields (again, IFs and SHIELDS) and another with assault cannon, so that I would cover all of the Fists exclusive equipment!

These terminators belong to the Second Company (like the Breachers), as indicated by their knee pads. Their shoulderpads have the standard Fists insigna on the left and 7 legion number in roman numerals on the right. Combi-bolters and hammer are magnetized so they can be swapped out (I have two combi-meltas in there). I haven't highlighted these guys yet as I rushed their painting in order to have them ready for a game. I will get back to them in time. I put a standard on one of the guys, if I ever want to play them as a Command Squad. Just a bit more list flexibility with a very simple conversion. 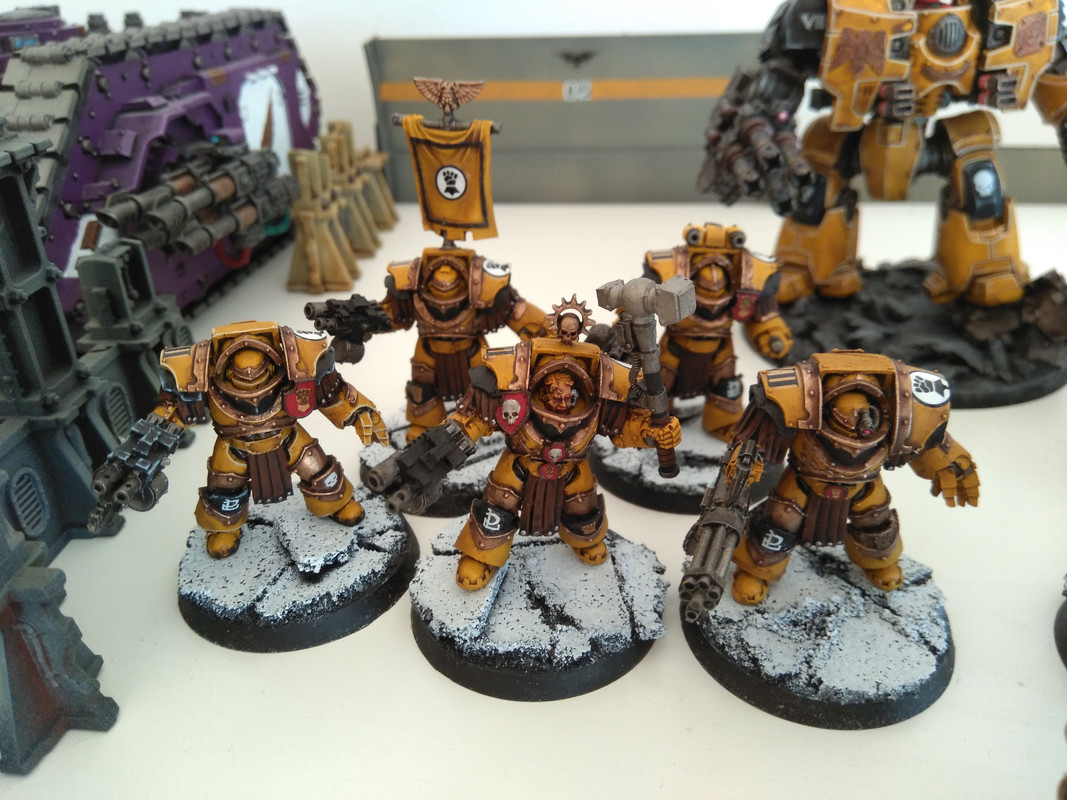 These terminators are black, to signal their belonging to the First Company. Sergeant and standard bearer have a Templar cross on their right pauldron to reflect their seniority, the others all have 7 in roman numerals, in order to tie them into the Fists legion despite their black livery. They also have a skull or a 7 on their knee-pads, again to denote veterancy and or belonging to the 7th. Swords and hammer are magnetized so can be swapped out with axes. I tried to give the squad some diversity, I'm not a fan of mono-weapon terminator squads. Like the other squad, I gave one guy a standard so that they can be played as a Command Squad if I ever wish to. 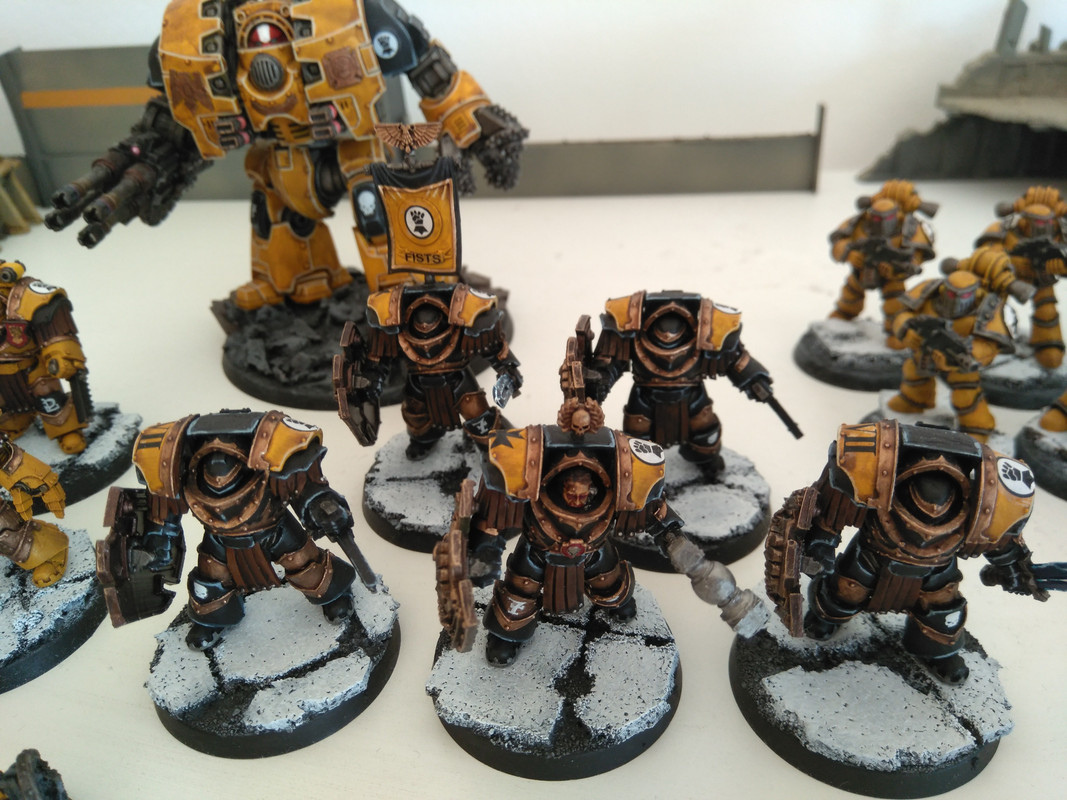 Bog standard Crusade era Centurion. This guy has the awesome Unification honors pauldron. I have yet to come up with a fluff background for this guy. I will probably make him belong to the Second Company, since I have that going on already and use him for games without named characters but as to who exactly he is, remains a mystery. I'm open to suggestions of cool fluff backstories. Needs highlighting, I know... 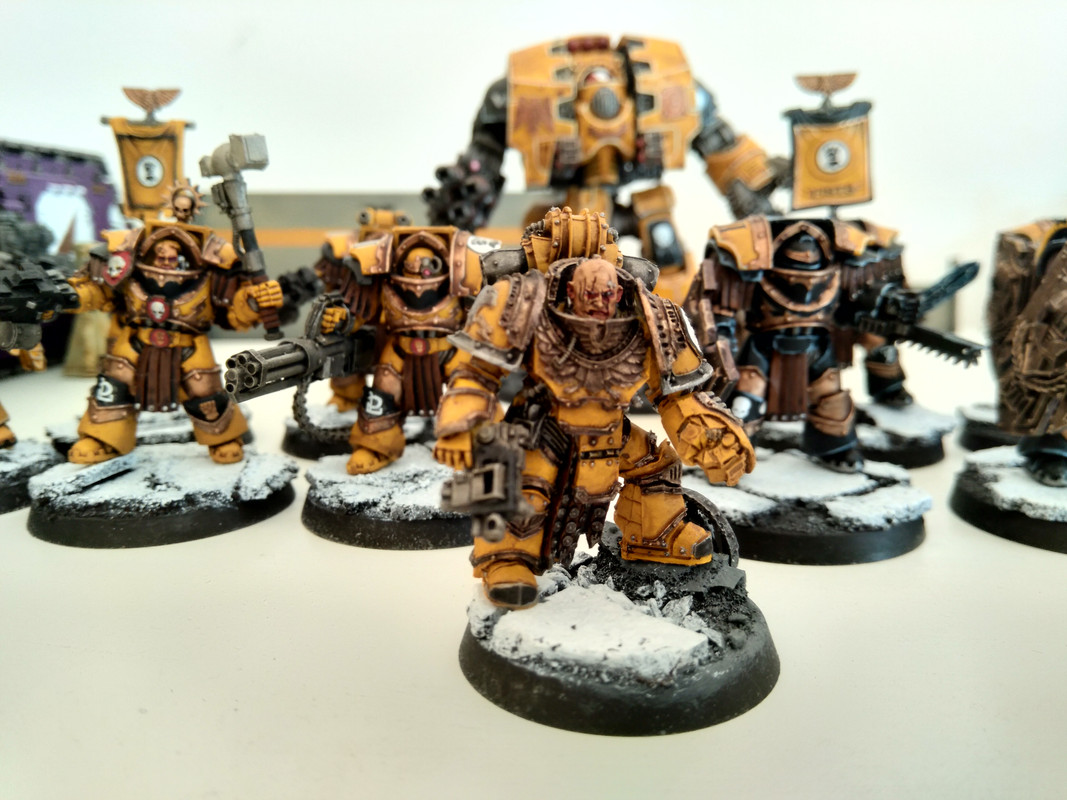 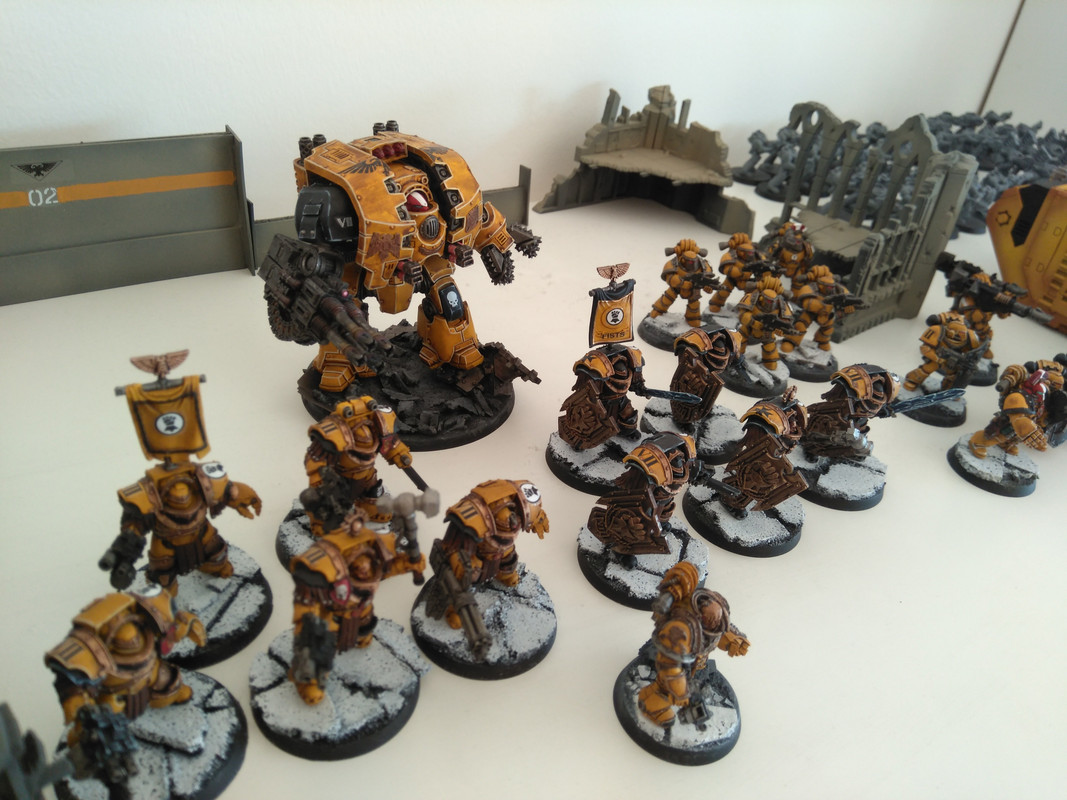 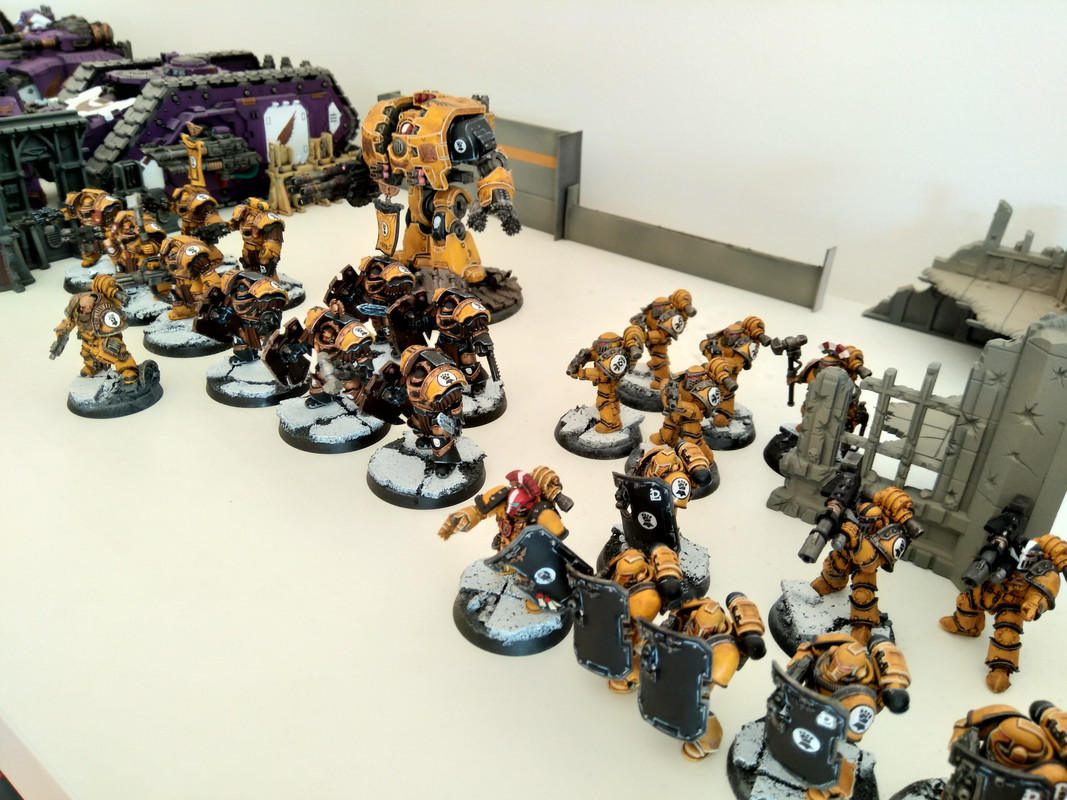 Cracking stuff so far, the black shields as well as the sergeant's helm bring some nice contrast in todraw the eye.

Cracking stuff so far, the black shields as well as the sergeant's helm bring some nice contrast in todraw the eye.

Thank you. To be fair, I'll take no credit for the color schemes: I try to stick to the Red Books as much as possible. Book III Extermination has all the cool reference pictures for the Fists, so I picked the ones who offered the most contrast, yes.

That is a beautifully painted army, sir! May I ask for the recipe on the yellow, and also on the copper for the terminators? Still undecided on the colour scheme for my own IF army, and yours is a great example.

That is a beautifully painted army, sir! May I ask for the recipe on the yellow, and also on the copper for the terminators? Still undecided on the colour scheme for my own IF army, and yours is a great example.

Thank you for the kind words, fellow Battle Brother of the VIIth. I try to keep all my paint schemes as simple as possible (no color mixes, not too many different layers, etc.) in order to paint fast and get things table top ready.

2) 2 layers of Yriel yellow. You don't really need more and probably, traces of your paintbrush will still appear as it's a very light color, even compared to Averland Sunset. This is fine, as once washed, these paintbrush traces will either disappear or look like weathering.

3) Agrax Earthshade over the whole miniature. Just be careful not to put too much or the miniature will really turn out brown. Ideally, it should tint the flat surfaces and accumulate in recesses to give some shading, but it shouldn't create big pools of black/brown. One shade only!

At this point I start to work the metals before step 4) if I am not feeling too lazy.

Copper is done as follows:

You can replace the Warplock Bronze with Leadbelcher. It turns out almost the same.

4) (Optional) Edge highlight with Sycorax Bronze although I am sure you could try something like Runefang Steel to give it an even more weathered look.

Hope this helps. Looking forward to seeing your minis too

Hummm,your yellow recipe seems pretty similar to what I had planned, so I will give it a try as soon as I can. I also have some yellow/orange washes and inks, I will try them too to see if I can give it a more vibrant tone (my previous attempts to paint yellow with averland + yriel have given me a kinda boring yellow). I'll have to get myself some sycorax bronze, about the only colour you mentioned I don't have.

Thank you very much for the tips, hopefully I'll put them to use this wewk to progress a bit with my ETL pledge!

Finally finished my 10 man Breacher squad. The two weapon specialists are magnetized, so I can replace their meltaguns with flamers for example. Given the meta I play in, meltaguns make sense. Have to finish their Land Raider Phobos now. 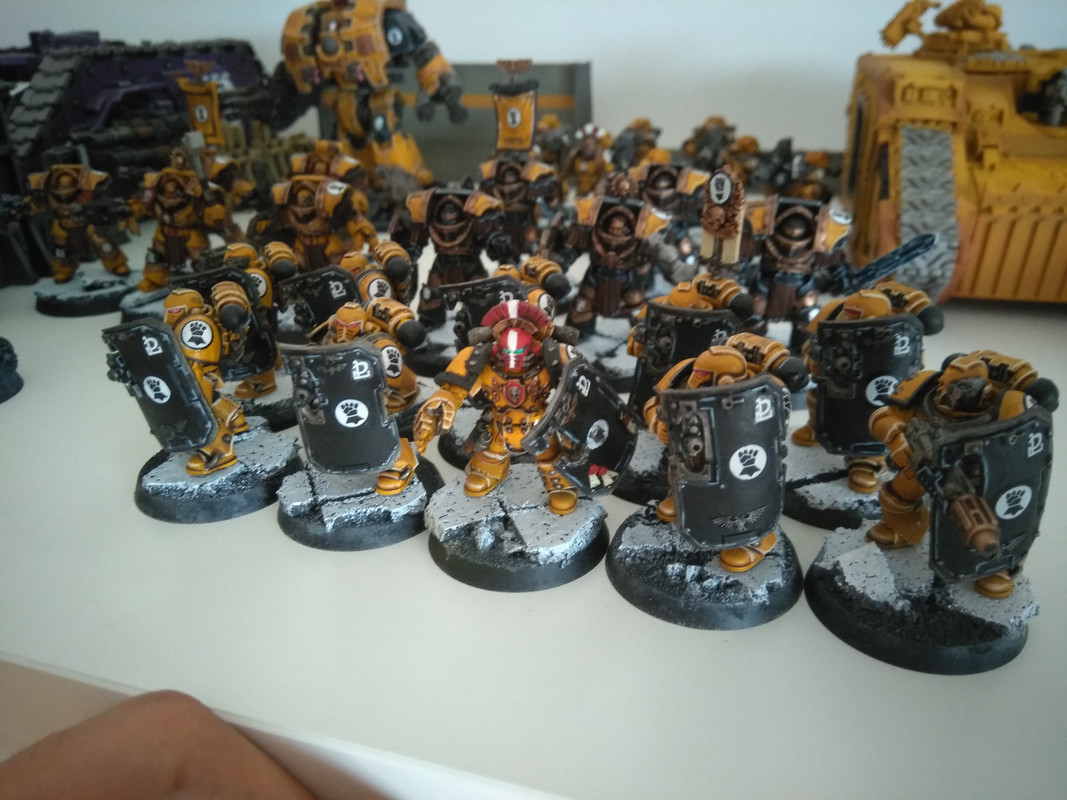 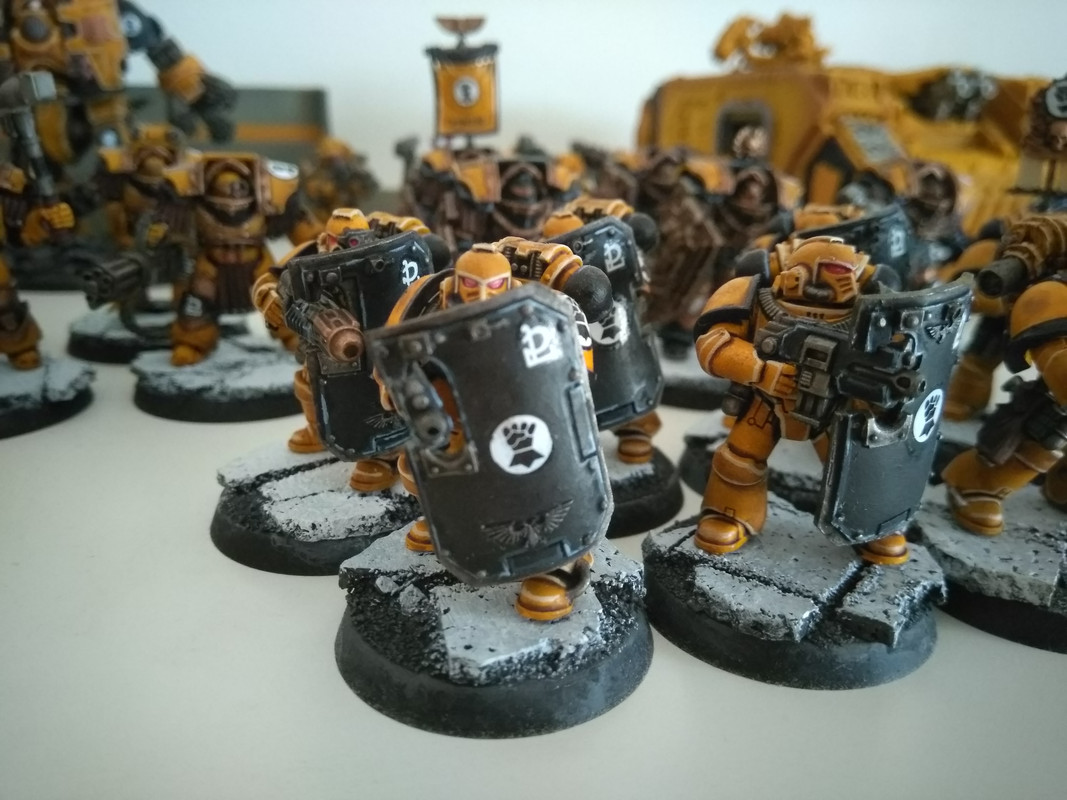 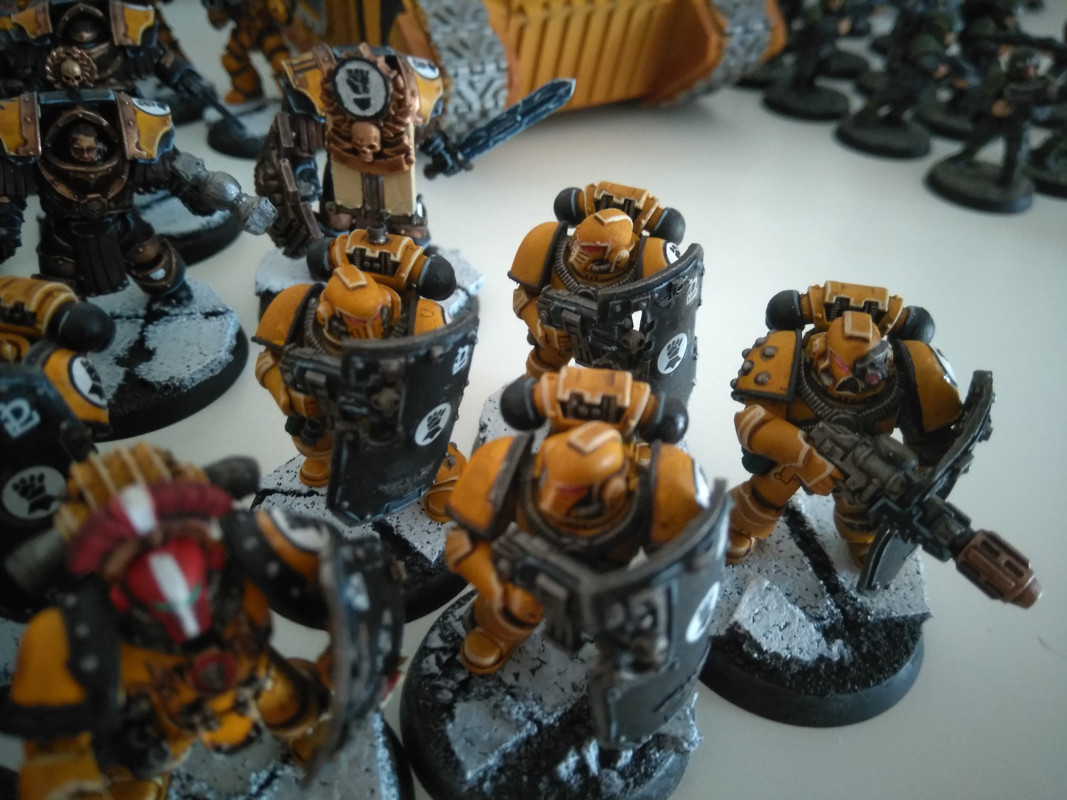 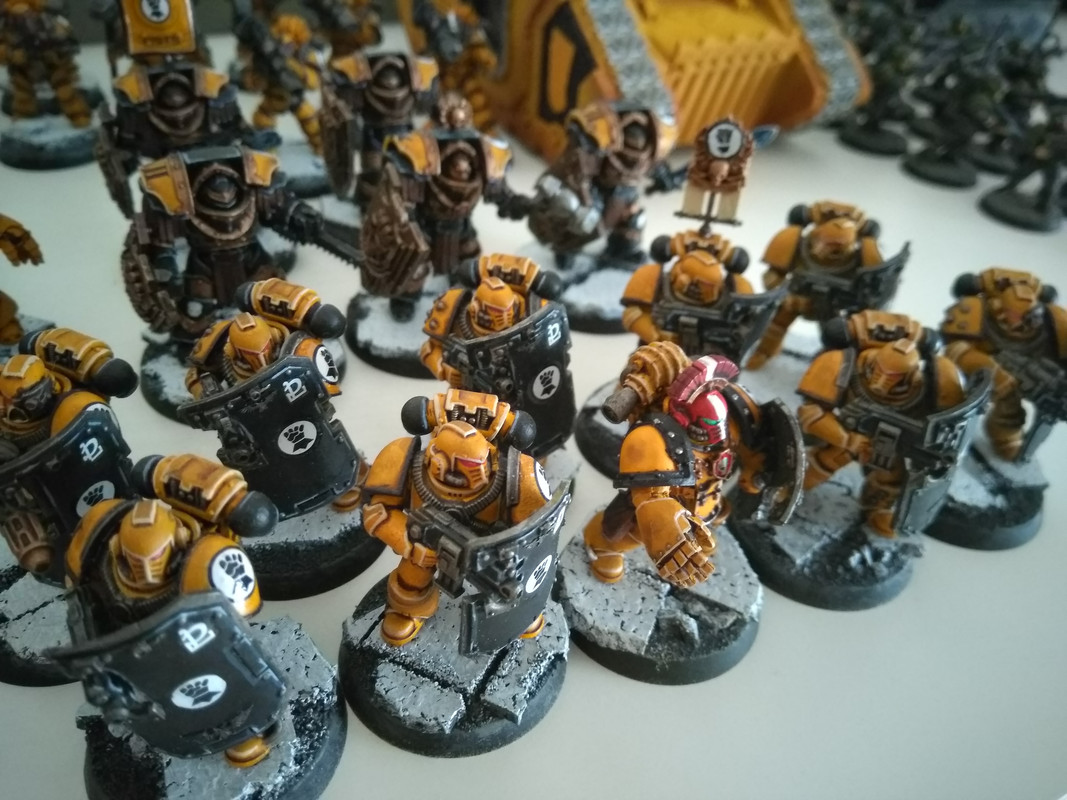 This MkIV Breacher kit is not so commonly used, I see most people going for the MkIII (which makes a lot of sense) but I thought a bit of variety would be nice. Eventually, I will come around to painting a unit of MkIII Breachers with the slotted shields. Imperial Fists are a delight to paint! Highlighting the black is a bit tedious sometimes but it really brightens up the dark parts so it's definitely worth it.

Rogaly Don-Don is HERE. Brothers, what an amazingly cool sculpt, Simon Eagan totally nailed it especially the face, such a HARD ASS! 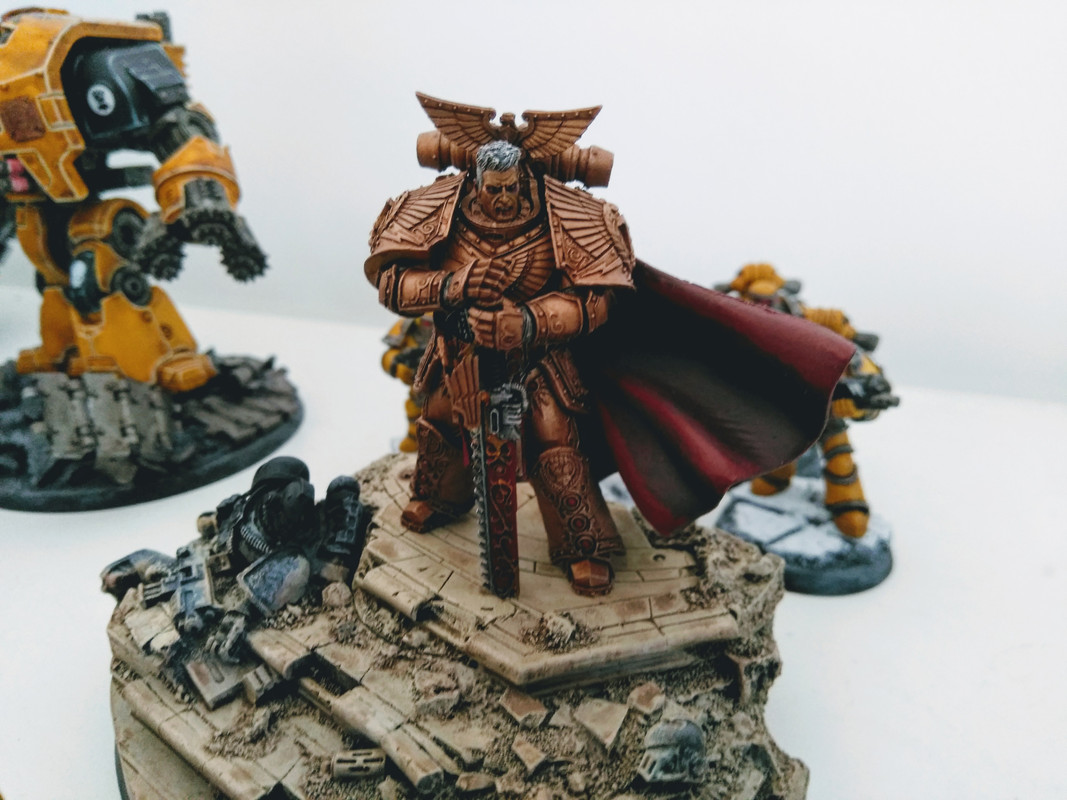 Will get back to him to do some more work on the gems but he is table top ready. 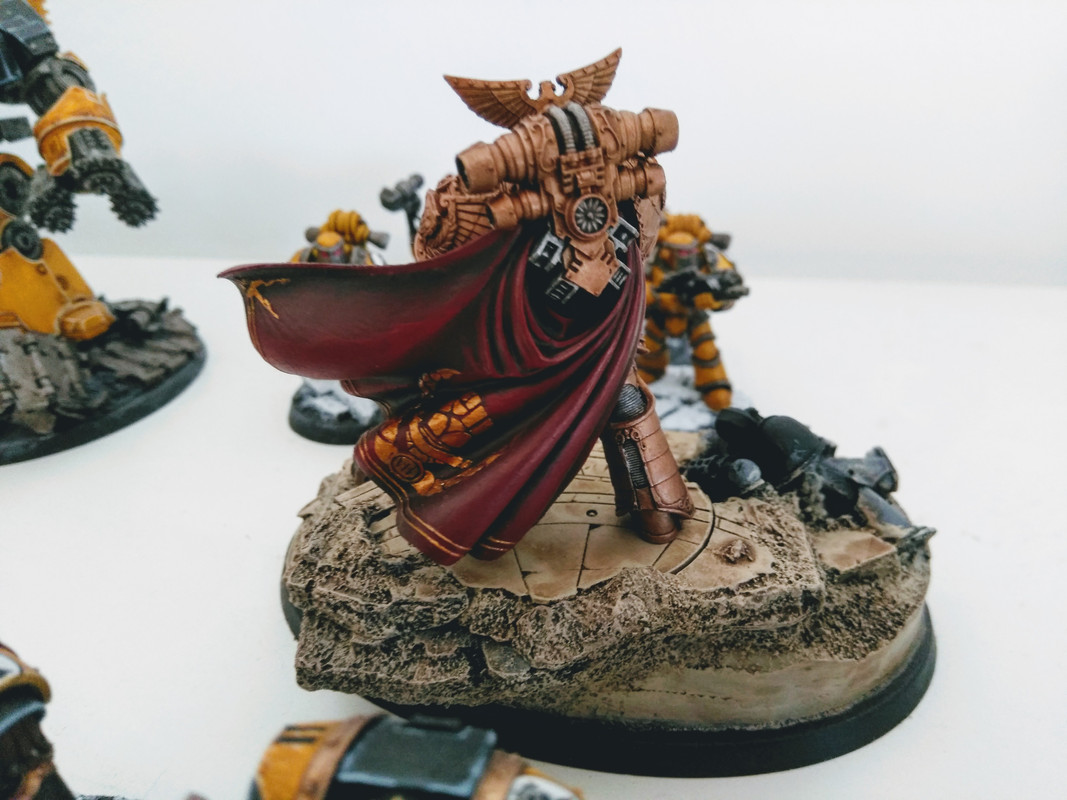 I'm loving this miniature. I didn't paint the bolter Voice of Terra and the grenades yet. Still on the fence as to how to position them on the model. Also need to paint the dead marine on the base. Hesitating between an Iron Warriors (duh), an Alpha Legionnaire (echoing the book Praetorian of Dorn) or simply an Imperial Fist. I'm leaning towards an Iron Warriors as they are my next army in the works.

Did I tell you that I love these? Especially Mk. IV Breachers. Been planning on doing something similar, only more ludicrously expensive.

I have finally painted up Pollux and am quite happy with how his face turned out. Also completed 9 out of 10 MkIII marines for my last compulsory troop choice. Just the vexilla bearer missing now. It's the unit all the way in the back in the group shot below. To reward myself, I have decided to work on my Veteran/Seeker squad in MkII armour! It's my first time with MkII, and I absolutely love it. The combi-weapons are magnetized, so I can switch to regular bolters, or other special weapons if I will be playing this unit as Veterans instead of Seekers. Gave the Sergeant a pain glove, a pouch on his belt to hold his miniature Rogaly Don-Don for evening prayers and some good old grenades. Wanted to load up the marines with ammo pouches but there hardly is any room on the models to do it nicely. Ended up cutting a double pouch down to a single pouch and sticking it on the leg. Oh well. 60 rounds. Better use them well and hope the battle ends quickly... Eventually, I will have to paint up my Land Raider Phobos, Proteus and Deimos Rhino. I keep on delaying this as I absolutely hate painting tanks but the army is hardly playable without armored support.

Armored transports have arrived brothers. A land raider Phobos (sadly not a MkII-B, eventually I'll get one) and a Rhino. I have Proteus coming up. The army is playable as is. I played against a friend who was using my EC's. Managed to pull off a tie although Fulgrim did take Dorn's head off on turn 6 after three turns of locked-combat with Dreadnoughts and Terminators involved. Overall, IFs surprised me as I thought they would be really immobile, but given that Termies can get teleportation transponders, Dorn as well, and Alexis Pollux can deepstrike with an infantry unit of his choice; makes for quite a flexible army deployment wise. Still have to paint the headlights of the Rhino. The decal on the hull of the Land Raider is really visible. I will try and tone it down with some Medium or something.