I have a pre codex Deathguard army but hadn't done anything new for them in years.

I made a Nurgle Ork, was asked by Pandorasbitzbox to paint one of his possessed (plague child), i've seen amazing Nurle work right here on B&C and then watched the Cinematic Trailer for Inquisitor Martyr with all the exciting Nurgle goodness in that. My fall was complete.

For anyone that still hasn't seen the trailer..

The Helbrute had to be made...

There aren't any stills yet but there is this pic too to help...

This guy has a cannon from the plague hulk but I prefer the look of the assault cannon style gun.

I love all the horns on this guy and think he's a great Nurlge Helbrute. Although bizzarely ruggedly handsome. He's supposed to be a hulk not a hunk. Aside from that he's great.

The horns come from the maggoth lord kit. I had that kit lying around for ages intending to do a Morback (Le Blog de Kouzes) Maulerfiend. I could see there would be a lot of spare horns but I couldn't tell which ones would be spare. I quickly put the maulerfiend together and started putting those horns to good use.

The one in the trailer has a rockin' bod'. So i used a spare Daemon Prince torso to replicate this. I have also tried to get him to be taking a step like in the trailer. I'm not overly happy with this so might try again or forget the stepping all together.

I thought I would use the hades autocannon from the Forgefiend but these are a little big. Then i found two Space crusade dreadnought assault cannons! Space Crusade being my first introduction to GW about 25 years ago.

Here he is with the gun in place. I still need to straighten out the ends of the barrel and put some spikes on there. Possibly it's a tad long too. In the meantime I discovered the Gatling Psilencer from the Dreadknight kit could make a great end of the gun. Pandorasbitzbox has a spare he's kindly said he will give me. Although it has 7 barrels and this one 6, is that a psign? I would need to redo the whole gun but lets see.

Here's a size comparison next to a kheres assault cannon that i nearly used.

Got a lot of Nurgle stuff planned now.

and I will get started on all those new Deathguard models at some point too.

Looks like a decent representation so far. It will be interesting to see what you do with the bits with the bits I gave you if you choose to use them.  That Nurgle symbol on his shoulder horn looks weird, looks like the horn normally comes out horizontally and the Symbol dangles? maybe its the photo... just looked odd jutting out.

You break my heart brother...

...but it looks super awesome so far!

Unfortunately the Gatling Psilencer doesn't fit with it having 7 barrels, so I've gone full plasticard for the end. When I've fully decided on the pose I'll check to see if anything is dangling the wrong way and fix those things, good spot.

I'm never gonna be let back into the fang after this am I? Really glad you like him.

@ DuskRaider
Thanks DuskRaider that’s very encouraging coming from a Nurgle head like you.

@ rednekkboss
Even more horns now. Thanks!

This guy is approaching the green stuff point. There’s gonna be a lot of green stuff to smooth those horns in and generally Nurgle up and put pustules etc on.

Still need to do the mouths that surround the head but I think that’s gonna be green stuff in the first mouth then do the outer mouth then green stuff again.

That’s the first mouth opening and this is the second...

I’ve put a fly from the maggoth Lord kit on his chest but not 100% sure in that. Opinions?

Gone slightly too close to the horn there, the horn can move over though so no probs.

Put him together with the new delivery of an ammo feed from Zinge industries that arrived today...

I thought I was close to priming. I thought wrong! I’ve still got a bunch of green stuff to go on all the horns, finish the mouth and front. Then general ‘nurgling up’. I haven’t decided quite how far to go with that. I’ve got a forgeworld Deathguard dread that is pretty much damage and decay every 2mms of the surface. I’m not going that far, but we’ll see.

I’ve decided to add a couple of features which is setting it back a bit but hopefully it’s worth it.

I decided some sort of weapon on the gun arm was a good idea. A bit of a divergence from the inspiration coming in now. I showed a couple of the guys who write on my blog some weapon options. I’d pretty much decided a bayonet, I had some left from the maggoth kit. But I also showed them an option with the Lord of contagion axe as I had a spare. Warbringer says ‘turn it around and show me another photo’. So it wasn’t a huge axe underneath but a bayonet with 40k parts to boot. So that’s what I did...

The ammo feed I really liked but it was just hanging off the base which wasn’t great. So I thought I could get some nurglings to carry it. There is gonna be sewage at the front of the base I’d started making so I thought maybe they could be trying to keep it dry...

So here he is right now. It’s a bit involved but I’m hoping it’s all worth it. I’m enjoying making him so that’s a good sign.

And another look at that bayonet.

That’s it for now. Hoping to crack on through that green stuff next.

I love how this guy is coming together, its getting so much character. The underslung nurgle bayonette has worked so well, and I think moving the power supply for it to further along the gun has made it really aesthetically pleasing, bothe narrowing the enormous profile of the blade and also making the gun slightly thicker before it.  The nurglings holding the ammo belt is really funny and a super cool touch. Im desperate for you to gap fill and get on with painting it! are there many more characterful tweeks you are going to make to it or is it just nurgling stuff up with like pustules and pock marks?

This is looking great cants wait to see the finished model.

I love the bayonet are you going to add anything to it? Have it dripping in gore?

I'm really close to finishing the model part now. I took a big blob of green stuff and didn't stop until it was all used up. Just got the ammo feed to sort out, maybe one more nurgling and a final sweep to do. Hopefully get it ready for priming tonight! that's the plan.

Ha, I'm glad you like the bayonet. It was your idea! I'm not sure about gore I can put that on after it's painted so I've got some time to decide. P.S. I've referred to you as warbringer above but your Bymis here, my bad.

After painting I'm going to attempt some sewage effect on the base. I've got some liquitex super heavy gloss gel medium (from making snow bases) to use. I've left the area to become sewage as blank base. I was going to paint it like concrete then put green or brown sewage over the top. I've got a couple of questions if anyone can help:

1. Anyone used liquitex to do sewage, is it any good for that?

2. Do I need to put texture underneath or just paint it a contrasting colour, or the same colour?

No Worries Hope for a name change at some point.

I’m calling this guy done and ready for priming. It’s the kind of model you could spend forever on. 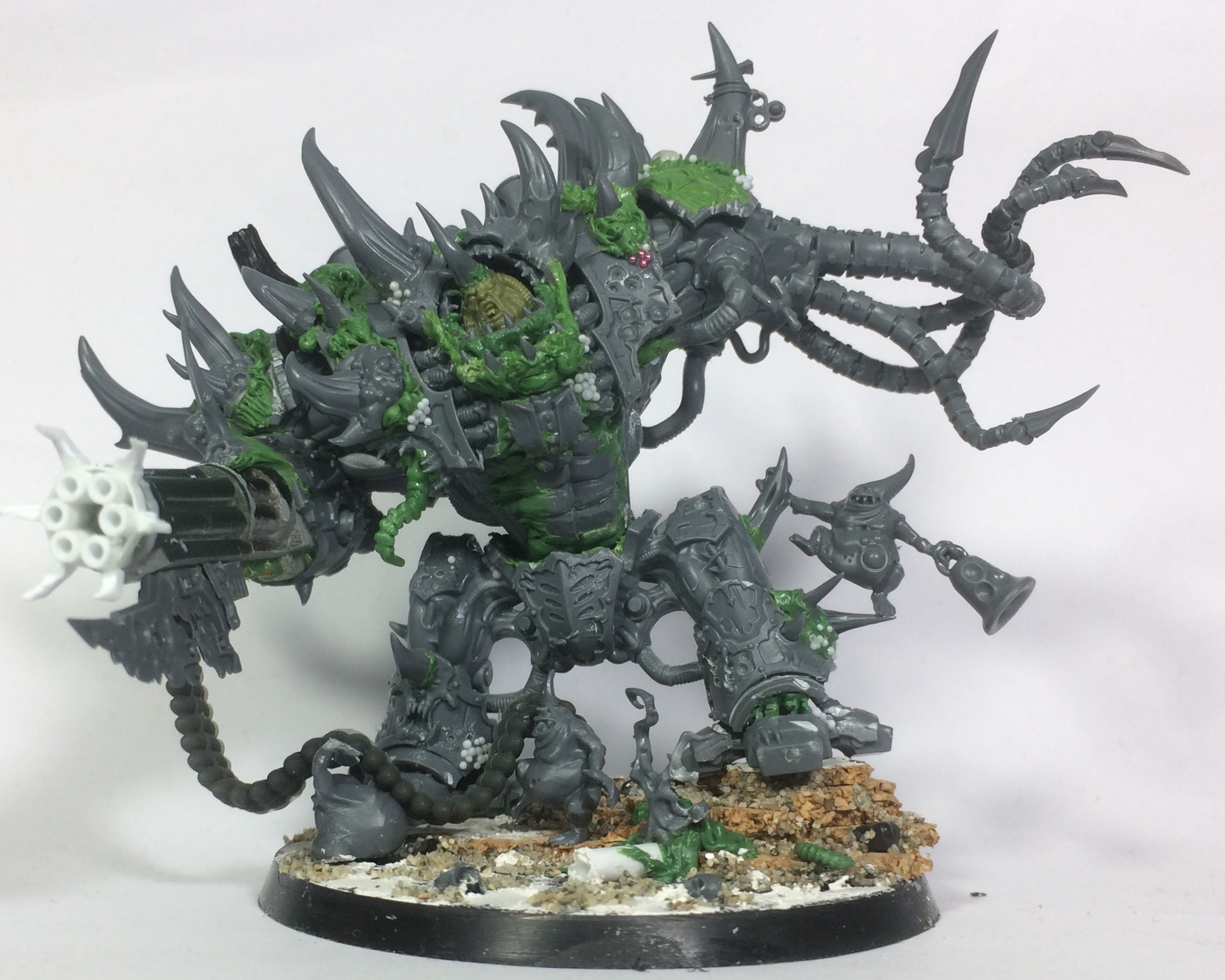 I’ve decided to try out water effects. So when it’s painted we will see how that goes.

*EDIT - blurry pics before, I've also noticed the ammo feed casing isn't straight so that will need fixing too.

Why dont you grab a spare base, chuck some rocks on a bit of it and then teat the water effects on there first?

I had the same idea. I’ve got two FW dreads and the Contemptor coming up. I could make 4 bases and experiment with the water effects. If they come out good I’ll use them too.

Great work on the Brute, there's so much motion trapped within the pose, one can almost see the scourge tentacles writhing about. The assault cannon style weapon is nicely converted up too.

I was a bit worried about that gun when the pieces I thought I would use all turned out to be a bit off.

I like the pose although it has strayed a little into Dark Vengeance Helbrute territory. The scourge is such a great piece it's the only bit i didn't mess with..although I did flip one tentacle around based on someone's (can't remember name) advice on here.

P.S. re-posted pics as they turned up blurry on entry.

I've just been staring a those pictures for ages now, and its hilarious how much cooler this one looks than your forgeworld dreadnoughts

I've said it before and I'll say it again. That helbrute is awesome!

Holy hell. What a monster of a helbrute!

And I'm not particularly fond of hellbrutea nor nurgle hehe

I really like those forgeworld Dreads. I've been using them as a guide to help 'Nurgle up' this guy. They are super detailed though. My main concern with them is they will look a bit small now. So I might have to put them on big rocks or something. Also they have a distinct lack of large horns...

Cheers! Hearing things like that will never get old.

Thank you. I personally love it if I find something that I like that I wasn't expecting to.

I really like those forgeworld dreads too, but did you i ever imagine you would own a Nurgle walker this cool? I doubt it! If you compare it too the others, ok, maybe the surface detail isn't to the same standard per quare inch or what ever... but the silhouette is great, its more dynamic and its full of narrative, like the base and the nurglings, just lots of information as you look around it. Its been fantastically executed.

This is incredible! Fantastic work bud, I really like the way you’ve incorporated enough gs work to show the nurgle aesthetic without going OTT which is something that’s pretty easy to do with Nurgle, can’t wait to see this painted.

Also tagged with one or more of these keywords: Nurgle, conversion, kitbash, chaos, Death Guard Legion