57 replies to this topic

Wow I am just so excited for these developments

Check out my truescale marines!

I like the idea of societies that grew up and developed on the Iron Ring and have never stepped foot on Mars (or any other planet) for generations upon generations. Their entire perceptions of "normal" life and "normal" human habitation completely warped (by our standards).

Call me Indy. It's less syllables. "...The origins of the Ring of Iron, like so much else on Mars, are shrouded in prehistory. The earliest part of the structure may be almost as old as human settlement on the red planet; what is known, however, is that by the time the Dark Age of Technology reached its zenith a stupendous orbital agglomeration of manufacturies, forges, shipyards and storage depots girdled Mars, acting as the beating heart of humanityâ€™s burgeoning Galactic empire.
Then came Old Night. Just as on the surface of Mars, civilisation on the Ring of Iron collapsed; vast sections of the structure were abandoned, destroyed or vented to the void, while other areas were gutted by vicious fighting. On the Red Planet, isolated pockets of humanity endured and gradually reasserted themselves against the mutants, cannibals and technological monstrosities that plagued them; the same was unfortunately not the case on the Ring of Iron, which was entirely depopulated and became the preserve of xenos, abominable intelligences, and worse.
Early in its expansion the nascent Mechanicum realised the strategic importance of the Ring of Iron, and expeditions were despatched to the structure to assess the potential for its reclamation. A foothold was eventually established; and from there, over several centuries, an ever-growing portion of the Ring was pacified and restored to habitability. The long-dormant shipyards of the Ring of Iron were tentatively brought back into service and the first Explorator fleets were despatched into the void, seeding the Forge Worlds and extending Marsâ€™ power to the stars even as the Mechanicum struggled to complete the conquest of the Red Planet itself.
The rediscovery of the void brought great benefits to the new colonists of the Ring of Iron. The Martian Synod only intermittently diverted their attention from more pressing matters on the surface of the Red Planet, so although technically subject to its control, in reality the inhabitants of the Ring became used to considerable latitude in how they organised their affairs. As Old Night began to draw to a close Martian void-ships began to spread out across the solar system to trade, proselytise and recover archaeotech, and soon the Ring of Iron became the hub of a nascent pre-Imperial commercial network stretching from the Saturnyne moons to the crawler-cities of Mercury.
The result was fabulous wealth for the denizens of the Ring, who had organised themselves into an extremely stratified society. At the top sat the Magnates of the Iron Conclave, whose membership was restricted to those Trade Clans listed in the Golden Book, the direct descendants of the first colonists to return to the void. Then came the Lectorate, who generally acted as clerks and agents for the guilds. Finally came the mass of the general populace, who crewed the voidcraft of the Ring and toiled in its shipyards and manufacturies.
Even before the Treaty of Olympus Mons, the growing economic importance of offworld trade meant that the Ring of Iron needed to look to the Martian surface to meet its demand for raw materials. With the established forges in Tharsis and Hellas already operating at capacity, the Clans of the Iron Conclave increasingly directly involved themselves in the economic exploitation of the less developed areas of the Red Planet, a policy which made them deeply unpopular- if not hated- in the regions they dominated..."
****
I've spent a bit of time exploring workaday Mars, but I thought it would be fun to look at the other end of the scale and examine the secular elites. As a result I'm putting together a little group from the Ring of Iron. 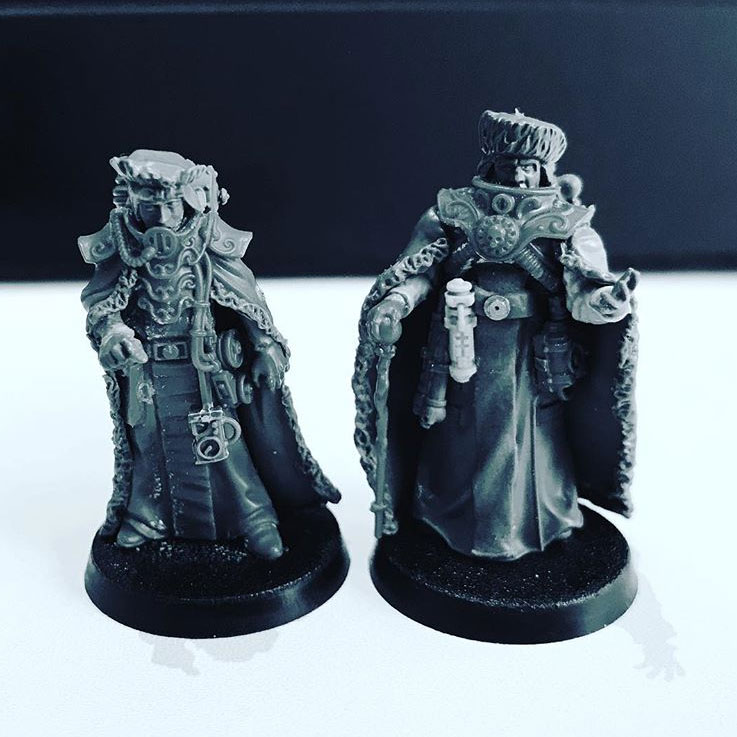 Meet Thrasimund and Lando Itakshir, of the Itakshir Trade Clan, visitng the surface for a spot of commercial negotiation. Let's look at Lando first;
Lando was the start of this little group, and came about when I realised that one of the old WHFB archer heads gave the Blackstone Fortress Navigator model a real â€śSci Fi Wolf Hall meets Phantom Menace Trade Federationâ€ť feel. I added a fur trim to his cloak to underline his obscene wealth; I imagine itâ€™s almost non-existent on Mars.
Then we have Thrasimund Itakshir, Lando's big brother. He's joined by Sharabha, Thrasimundâ€™s pet, a gift he recieved from the Selenar Genewrights for services rendered.
For Thrasimund I wanted to replicate the look of Lando without using the same model. This eventually led me to use the torso of the Rogue Trader Magos with Delaque legs, with a similarly lavish cloak greenstuffed on him. Iâ€™m really pleased with how he turned out.
Finally we have Magos Astronomica Harukor, Purohit and Chaplain to the Itakshir Trade Clan.
I wanted Magos Harukor to look like he'd quite happily wander out of an airlock whenever it suits him; I used an Arkanaut Admiral torso to gve him a space-suit feel, and gave him a representation of the Ring of Iron to top his staff.
That's it for the time being-

I have several other members of the delegation tofinish off, including possibly the lander they arrived in.

I've been dying to make that pun since reading that line in your awesome New Year's update. I'm not into Instagram because I like to read about stuff instead of just looking at pictures, so please, please keep this thread updated.

Also, you vexed me by dissing Star Trek, but I'll let it slide because this thread is so cool.

[snip]
I have several other members of the delegation to finish off, including possibly the lander they arrived in.

I've been dying to make that pun since reading that line in your awesome New Year's update. I'm not into Instagram because I like to read about stuff instead of just looking at pictures, so please, please keep this thread updated.

Also, you vexed me by dissing Star Trek, but I'll let it slide because this thread is so cool.

It's nice to have Mars given some form of context I can visualise. Well done sir. You've made 40k abit more easier to mentally envisage for me.

"Poor chaos, the result of trillions of randomly merged hostile emotional subconsciousness's...........and 70% of them are female" Sorry for the radio silence on this thread. I've just come back from holiday. Ordinarily this isn't something that I'd bother the board with, but on this occasion it was quite on-topic- I was in the Jordanian desert, which I think is as close to Mars as it's possible to get while remaining on Earth. It was hugely inspiring; the red stone, the ancient doorways and windows carved out of the rock, the sandy expanses broken but by rocky volcanic plugs... The Martian was filmed there and in my recent projects I spent a lot of time looking at photos of the region for inspiration- so to actually have the opportunity to go and experience it for myself was amazing. Here's a sense of what I mean- incredible. I really need to make a temple to the Machine God hewn from the rock. I also made a little progress before I left, and so I can introduce the final member of the Itakshir Clan; Gisulf, the Paterfamilias. I was very keen to avoid any sense of the stereotypical effete, useless noble with my Magnates; these guys are the ruthless, tough-as-nails adventurers who make the vast fortunes their latter descendents squander in the milennia to come. I had Thomas Cromwell in my head throughout. 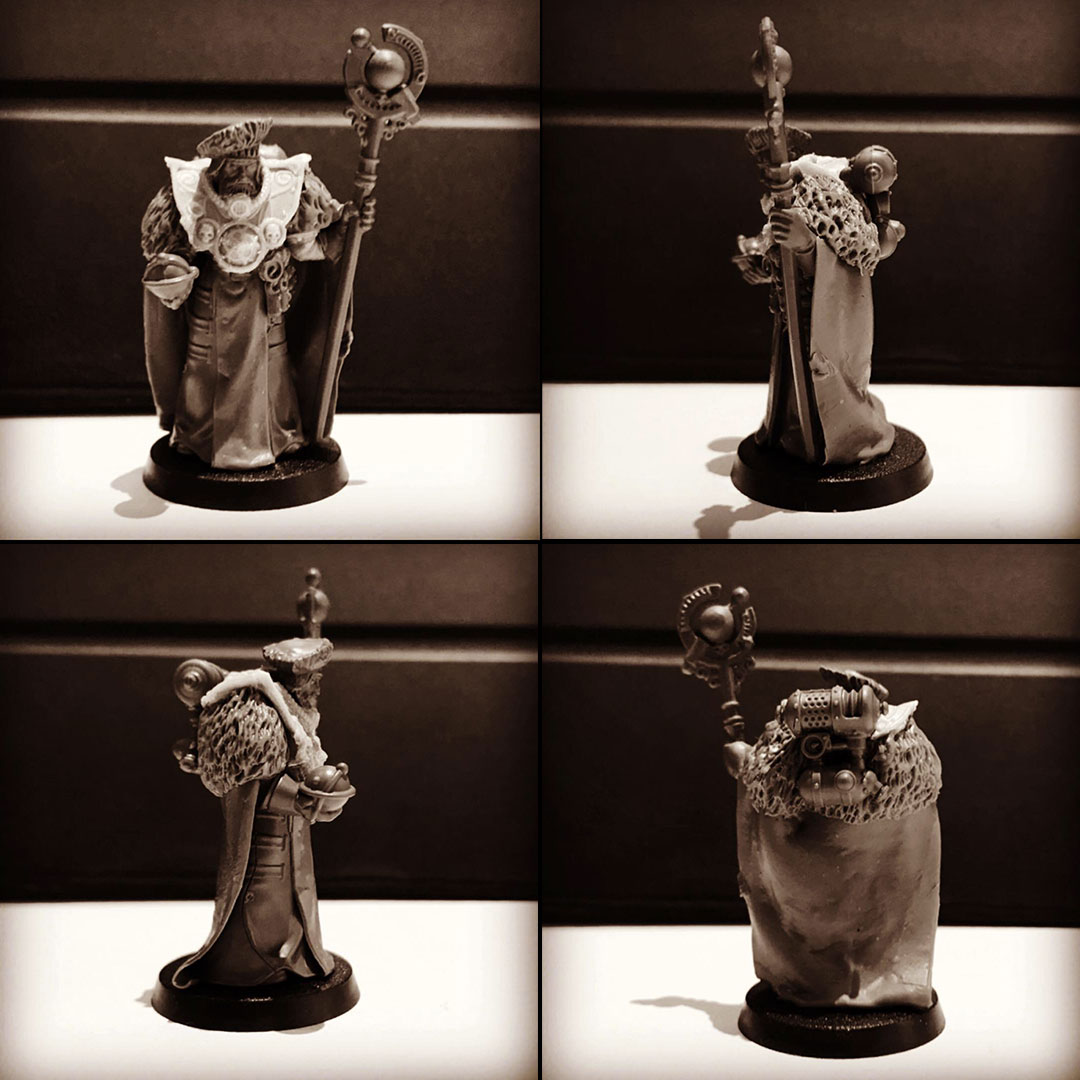 Gisulf is older and more senior than his nephews, and, while I still wanted to get across his utter willingness to screw everyone else over for a quick profit, I also wanted to convey the fact that he's getting on a bit and is rather weighed down by the sheer bulk of his ceremonial regalia. Here he is in a slightly blurry shot with the rest of the family.
And that's it for now- but more soon.

So glad you had the chance to visit Jordan...â€¦ I was there many years ago myself. Quite inspiring

Also tagged with one or more of these keywords: 8mm, epic, adeptus titanicus, mechanicum, mars, inq28