+++ Thought of the Day: The price of getting what we want, is being laden with what we had once wanted. +++

I previously did a more thorough unboxing of Space Marine Heroes Series 1: the Ultramarine Tactical Squad.  This is the sequel.

At the 500th Warhammer Store opening in Hong Kong, they had Space Marine Heroes Series 2: the Blood Angel Terminators.

It's very much like Series 1.  There are a number of random models all in the same type of box.  They are drawn from a larger crate.  However, the Series 1 crate with all the models was shaped like a giant Rhino, which was at least funny.  This time, it's just a relatively generic red box.

A few of us in Hong Kong bought these for fun and the general impression we all got is the Lightning Claws one, charging forward, is the fan favourite, due to his dynamic pose.  Putting them side-by-side with other Terminator kits, these look a bit more detailed, and they're just a bit finer.

There's a silhouette of the Terminator Captain.  It is an AWESOME figure.  He's got like an auspex built into the back of his Power Fist.

They're priced at like £7/under US$8 each.  Actually, the cost per model is probably cheaper than the actual Terminator Squad box.

PRO-TIP: I literally picked up each box in the crate, weighing them to see which was the heaviest, to get hopefully one of the fancier ones.

As with Series 1, we got the model, instructions, a biography card, then also an invitation to the other Japanese Warhammer Stores:

By weighing each box and buying the heaviest, I got the Terminator Sergeant with Thunder Hammer and Storm Shield:

As you can see, there's a helmet head and an unmasked face.  I get the option of choosing either one, I really like the head though.

Notice the highly detailed base.  It has the Terminator's feet as part of the base, so we slot his legs into them by the ankles.

Finally, NO BLOOD ANGEL INSIGNIA, just transfers.  They're Chapter-neutral, can be used for anything.  Just extra-detailed Terminator models.

There's a Terminator Standard Bearer, that's not in these crates, but he's the final member of the squad.  He comes in a separate paint set kit/SKU.  You may have heard about this, but I want to show you the paints that come with it:

It is priced at I think £30/under US$40.  It's already a bargain bundle for the paints alone, so this limited edition miniature is a bonus.  What I like about it is things like Agrax Earthshade, these are not just starter primary colours for newcomers to The Hobby, but paints I often use and run out of.  May buy.

I actually can't get over the fact that buying a full crate/squad of these guys' cost per model might be cheaper than the actual Terminator Squad box.  And these are limited edition and you get the Terminator Captain to use as a HQ, is an amazing model, that's the real prize.

Series 1 is just fun, I really like the one I got, but this Series 2 might be actually a better deal overall than buying traditional Terminators.

I actually can't get over the fact that buying a full crate/squad of these guys' cost per model might be cheaper than the actual Terminator Squad box.

Indeed; I ordered a couple of sets from Japan recently, and if you discount the shipping cost, the boxes work out at about £25 each, which is £3 less than a normal box of Terminators from GW and has a Captain bundled on on top. It's insane really.

Even after shipping and taxes, it's going to come in less than buying 2 Terminator Squads and 2 Terminator Captains from GW.

I forgot to show you what it looks like painted.  I made mine into a Black Templar, because as you know, there are actually no Chapter-specific markings:

Btw, please remind me, someone, anyone...have these been released to the Rest of World yet?  Or is it a Japan-exclusive still at this moment, early May 2019?

So far as I know, the rest of the world is still waiting on this release, but I can't imagine it'll be too much longer.

Active Projects: The Great Repaintening! - follow along on my journey to repaint a Blood Ravens army. | Adeptus Titanicis: Legio Metalica - a slow-grow plog of tiny titans and tinier knights.
Finished Projects: Brother Casman's Waaagh! - All of my Orks... for now. | Brother Casman's Terrain Extravaganza! - Getting the "Third Army" on the battlefield

In the operations of war, [...] the expenditure at home and at the front, including entertainment of guests, small items such as glue and paint, and sums spent on chariots and armor, will reach the total of a thousand ounces of silver per day. Such is the cost of raising an army ...

The worldwide release of series 2 contains 3 new models that weren't released in Japan (but is missing the heavy flamer terminator).  There is a new guy with Thunderhammer and Storm Shield, a new one with Assault Cannon and a new walking one with Storm Bolter and Powerfist and a servo skull

Pic is from Smaug on Dakkadakka, from the NY toyfair: 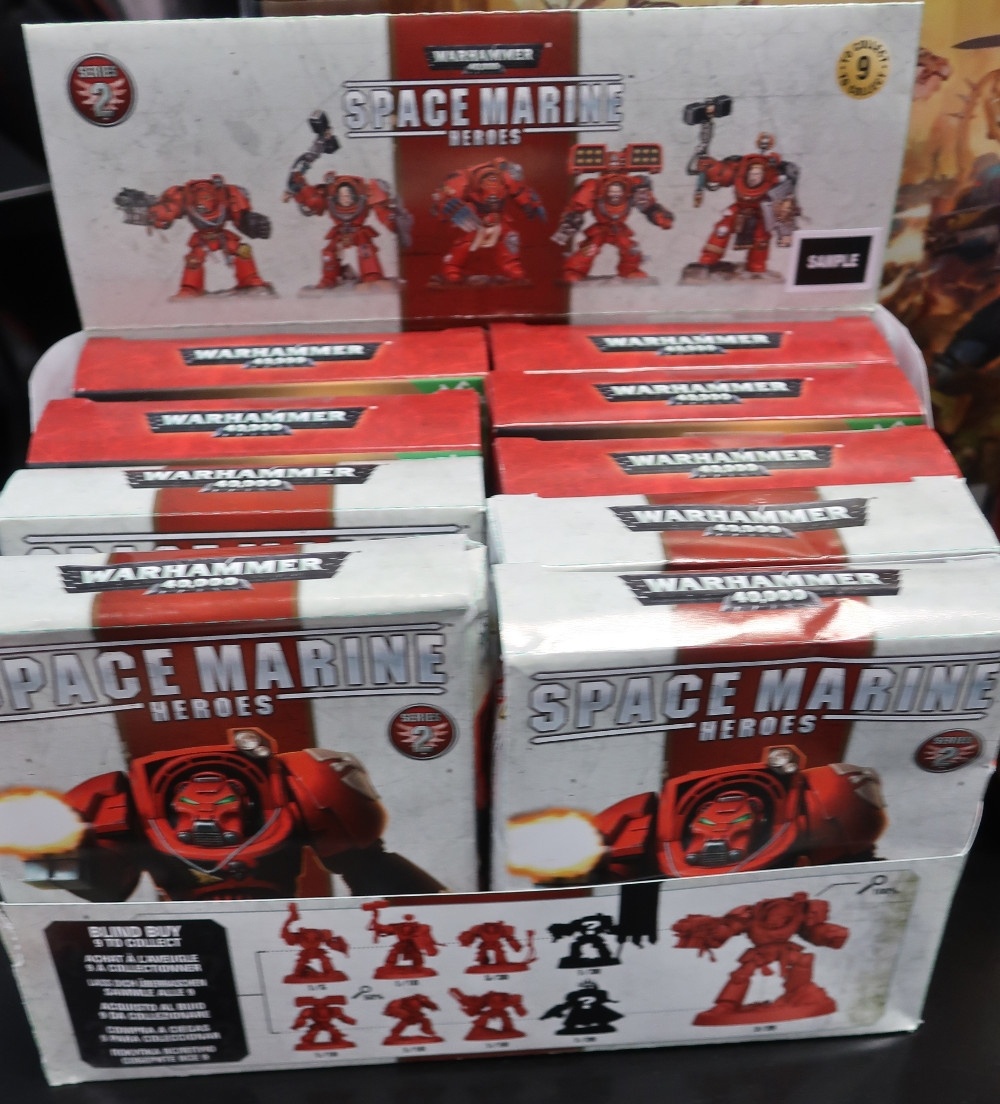 Thanks for confirming, I was hopping between this thread and the upcoming Series 3 thread.

We're missing those 3 you mentioned, and of the 3...they're all great actually.  Even the basic walking Termie, the way these are constructed (so the model and the base are actually designed to work together), the ambulatory guys are actually the most interesting to us once people got them out and painted.  We had a Heavy Flamer + Chainfist guy...who won't be missed probably.  Thanks a lot to you, Brother Robbienw, and others for updating us.  News about this stuff has been coming so fast it's making my head spin.  Great stuff.

Reminder - when this comes to you and it's opened up like in that photo (which was similar to how we got ours), lift each box to see which is the heaviest...that'll probably be the Thunder Hammer one.

Back to + SPACE MARINES +

Also tagged with one or more of these keywords: space marine heroes, series 2, terminators, N1SB Labs