192 replies to this topic

Master Ciaphas, they look brilliant! Great work on the eyes and the (dreaded) yellow on their heads!

And lovely crates too!

Thanks all, your kind comments are very much appreciated!

Last week saw a special promo at my FLGS, so I got these with 20% discount on the total; not too shabby :-) 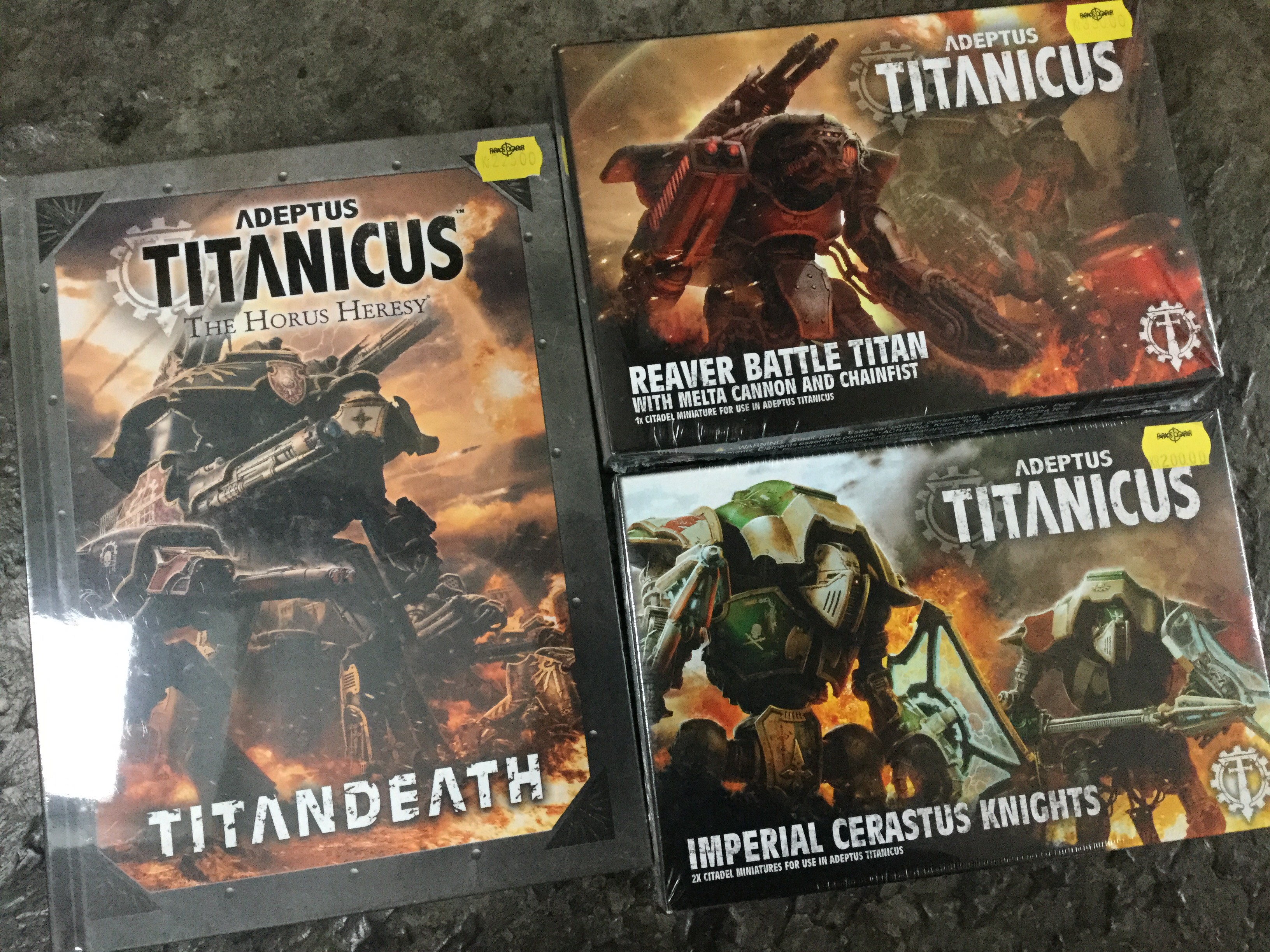 I guess I could not wait to get more beautiful models onto the waiting list! My next thought is that perhaps I ought to get name plates for the lot of them. What do you say - points for cool or too gimmicky?

That's a lovely blue on your 'hounds. I found the cerastus knights quite fiddly to put together, because there's nearly as many parts as a 'hound, but they're half the size. They are lovely models once assembled and I think they'll look really good next to your questoris knights.

Thank you! And yes, I am sure those Cerastus Knights will be fiddly. That said, I enjoyed the Warhounds, so perhaps that is not the worst comparison :-)

I have spent a few days removing the Civitas Imperialis terrain from their sprues and scraping off the mould lines (such a chore!). That done, I have been putting another three buildings together, instead of finishing off those three Questoris Knights I have had "almost done" for two and a half months now...gah. 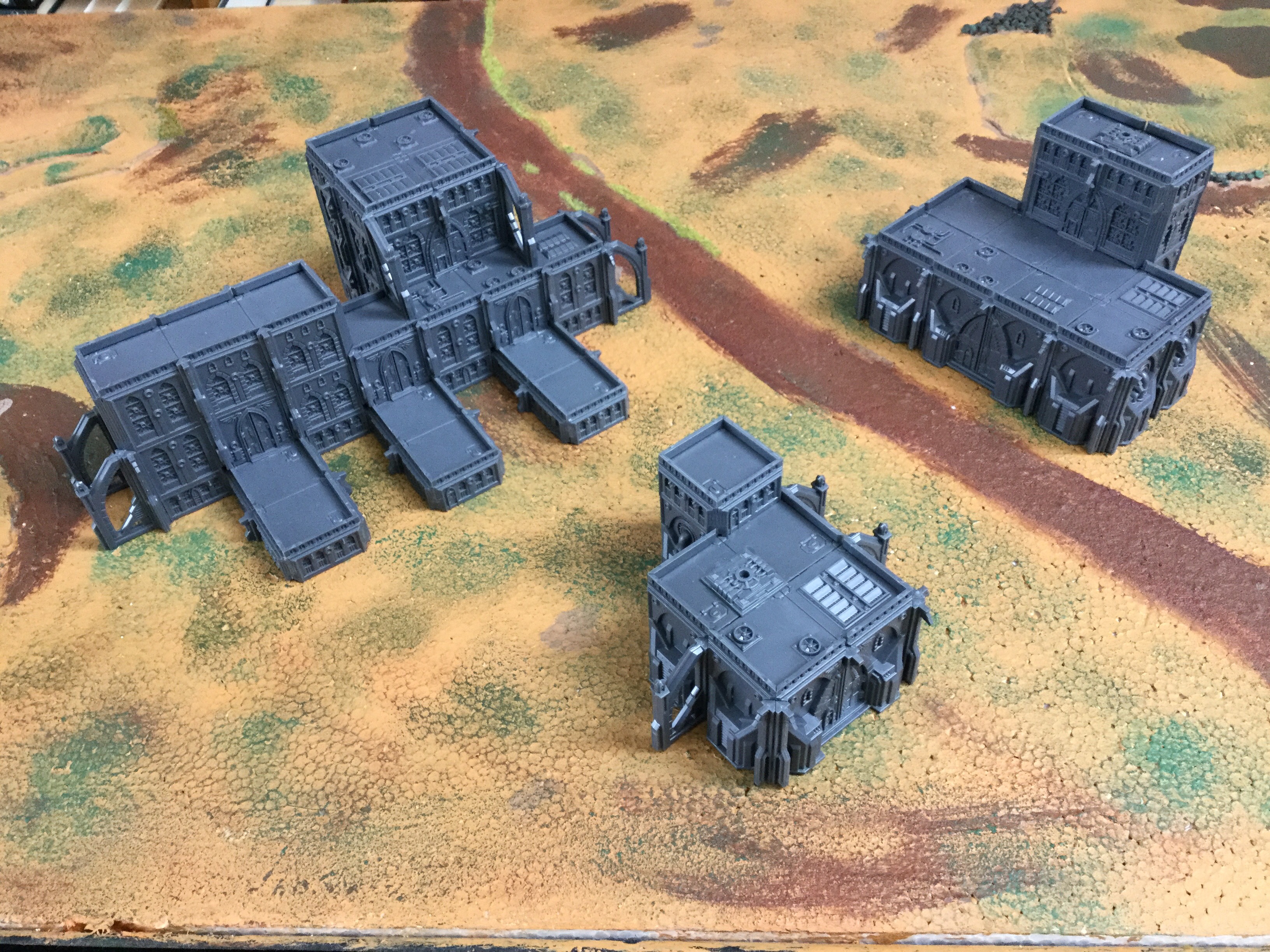 All in all, I am quite satisfied with their looks. I have managed to do a bit more with them, than I did with the first batch.

Secondly, I have perhaps been a bit too brave, but I have entered this lovely duo in Captain Semper's fantastic "Titans of the Heresy" event: 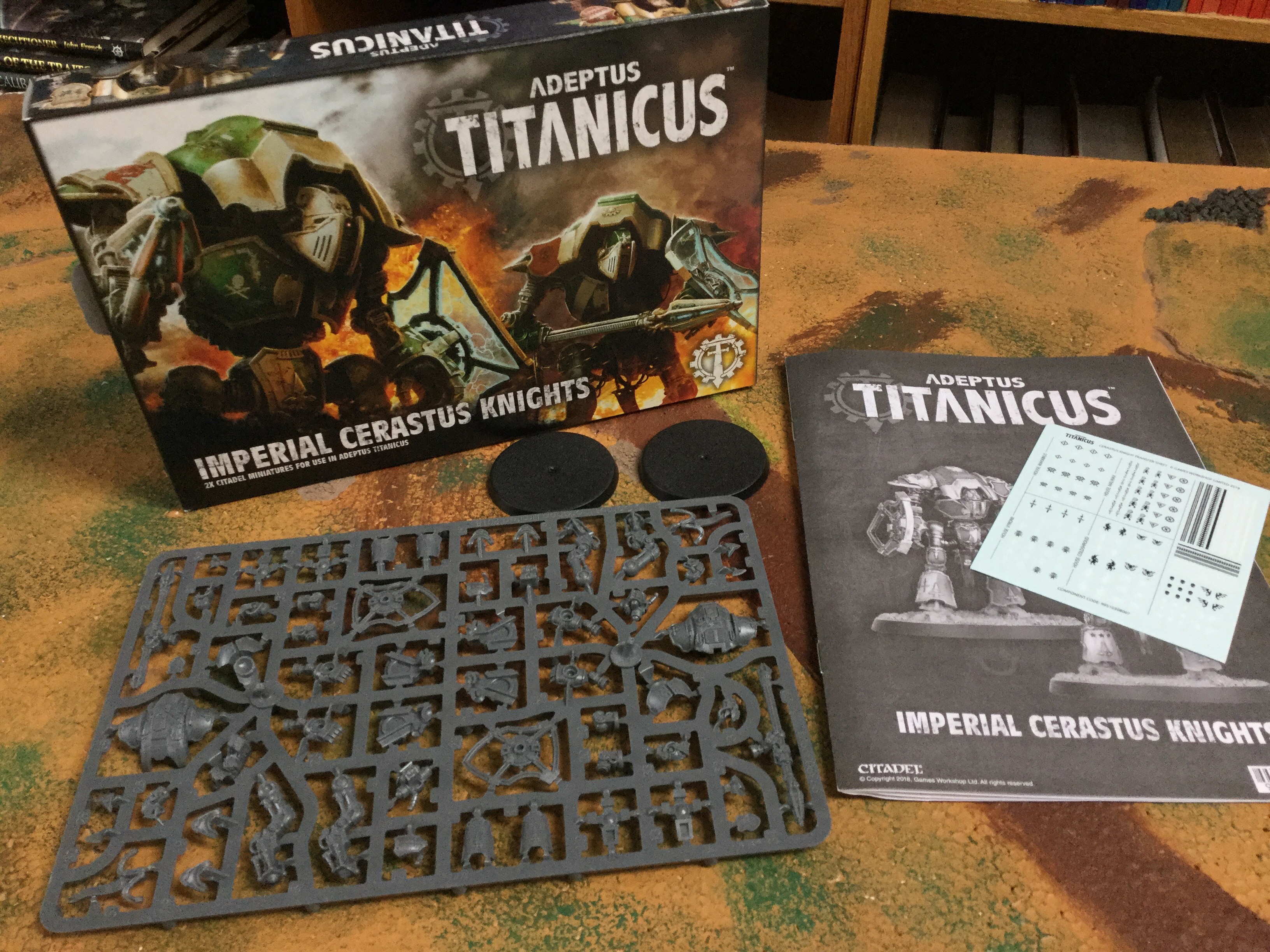 Stay tuned for an update tomorrow :-)

The buildings look good which set is that? I bought the smaller box to use on bases but I am probably just going to build them as actual terrain. I want some Knights but they go out of stock so quickly from my local game store!

I really like how you’ve assembled the biggest of those buildings. It’s got a lot more character than a simple square box.

Best get the finger out with those knights then.

Best get the finger out with those knights then.

Aaaaand on that helpful note: 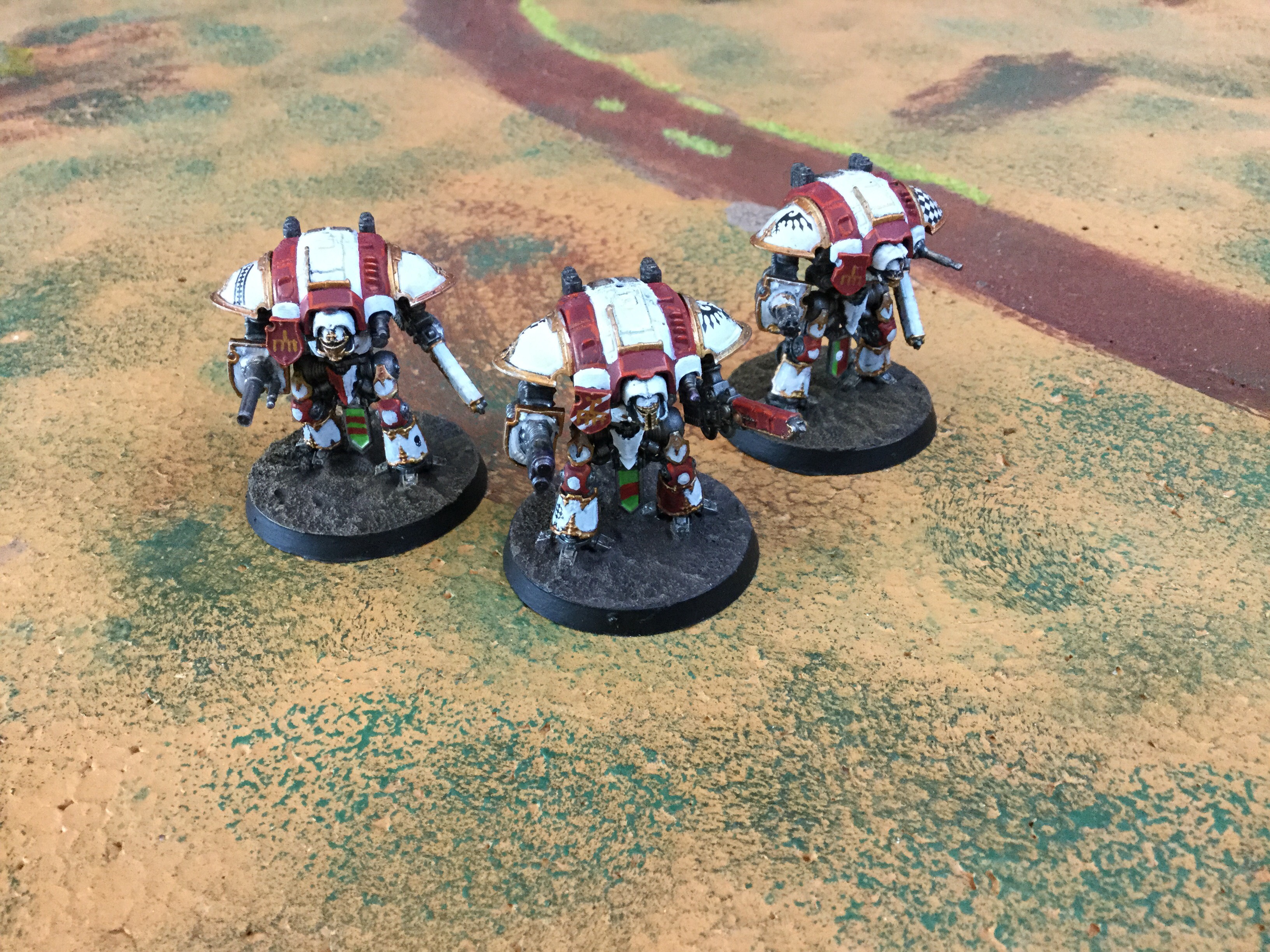 And another, with the latest building in the background 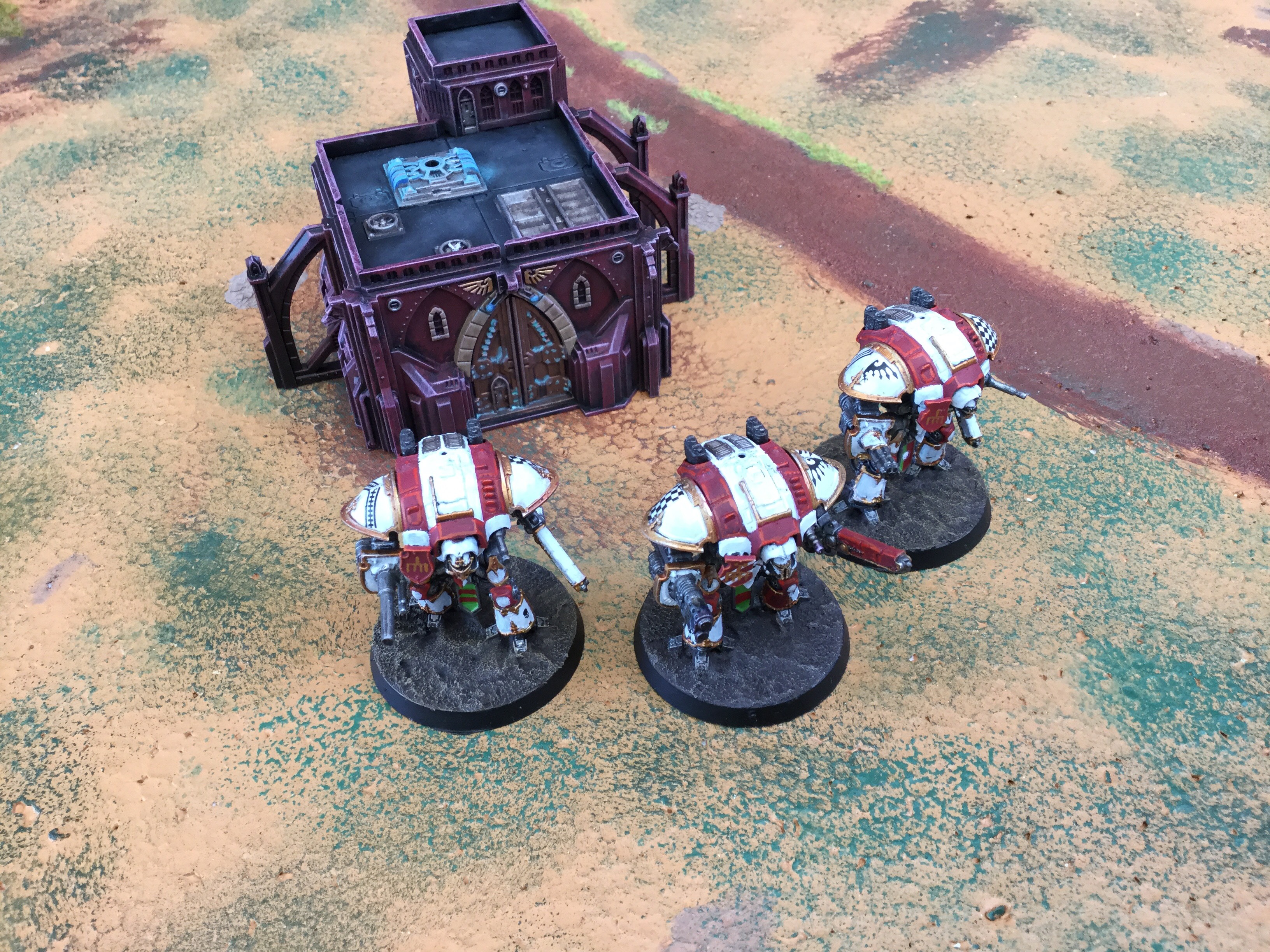 I also made progress on my Reaver and have assembled the two Cerastus Knights for my Titans vow... 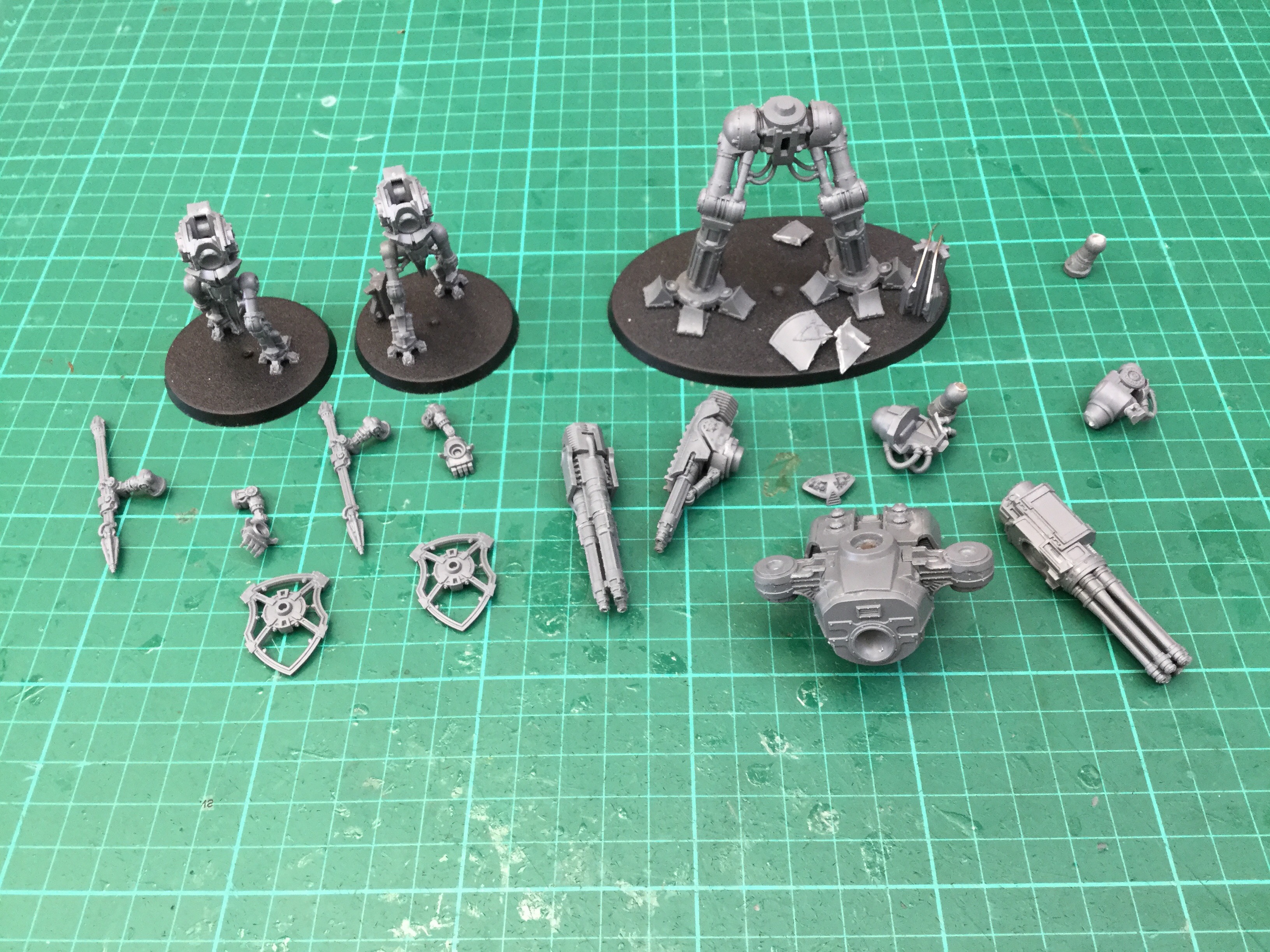 The Reaver is fully magnetized, so that is a joy! I am very well pleased with how it turned out!

Nice stuff, I do like the knights and the buildings, cool combinations. Good progress on the Cerastus and Reaver too!

So - I have managed to finish off another of the Civitas buildings, and taken decent photos of them. Also, I tried to make wee banners for one of them, just give give it a bit more oomph. 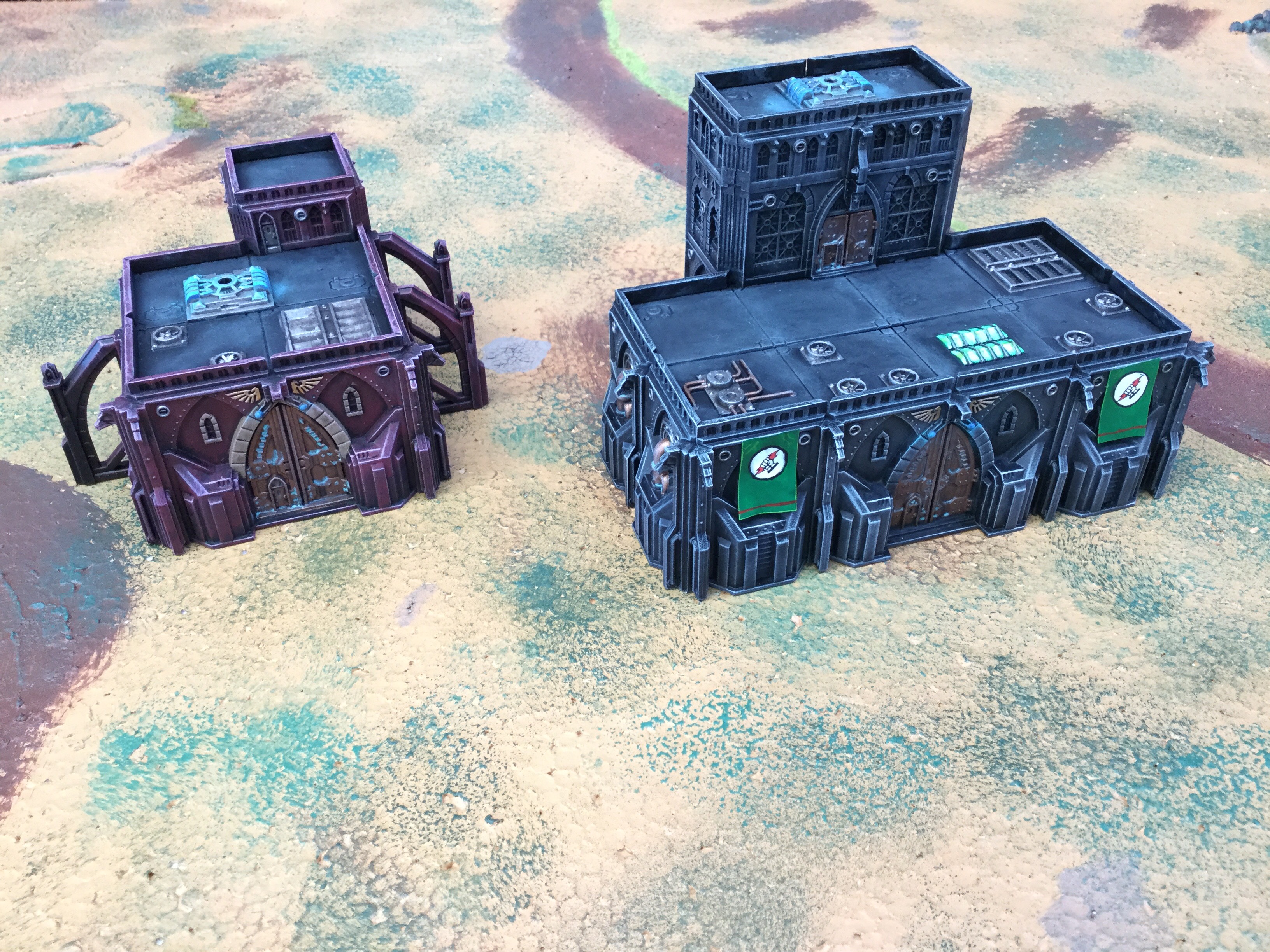 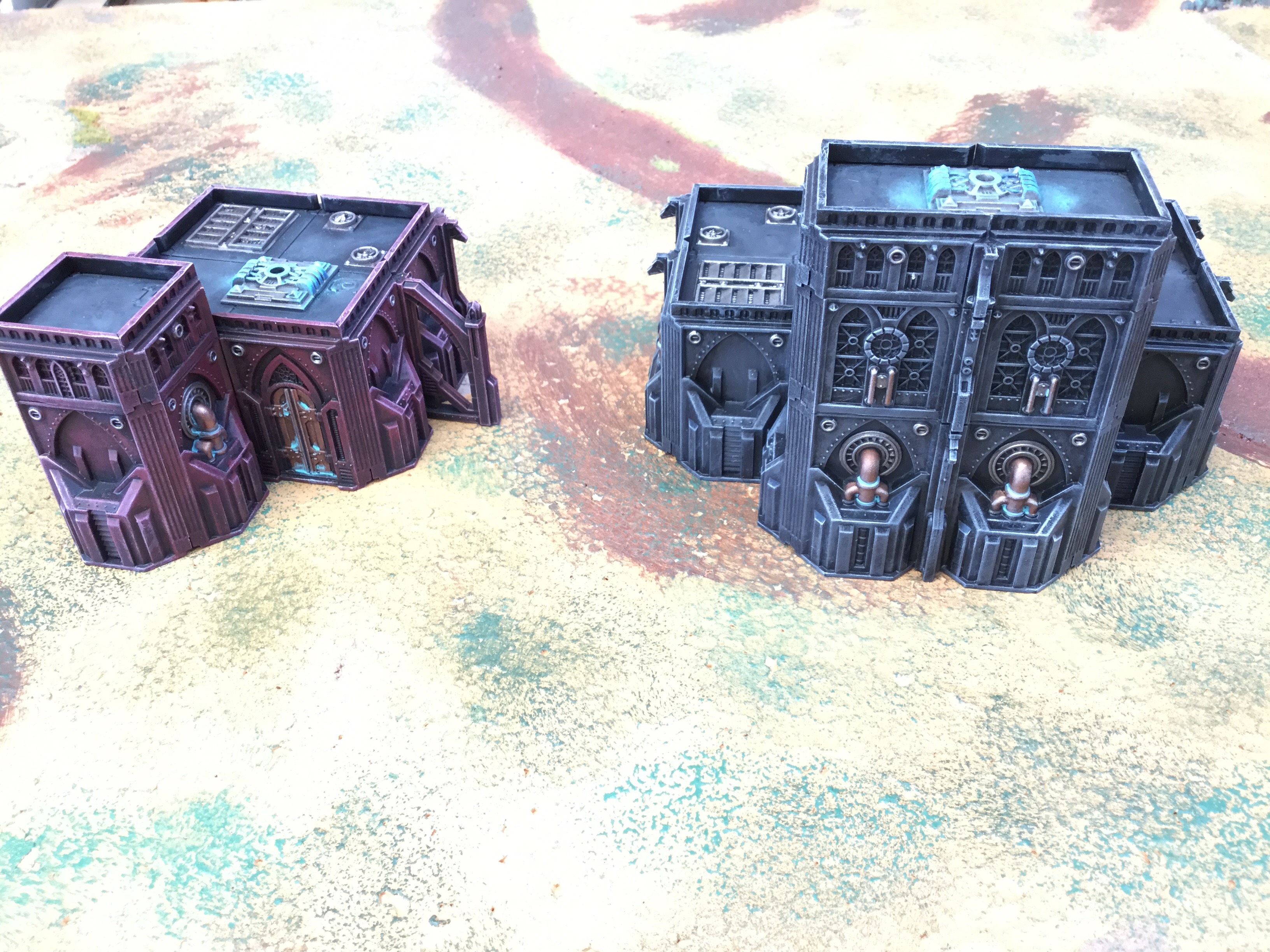 So now I can start to focus on the Cerastus Knights, where the bodywork is done. Now I need to finish off the carapace...

I always like it when you post more of your buildings. It’s apparent that you really put a lot of thought and effort into making them characterful and unique.

Keep up the good work, sir.

I love the little (well, relatively huge) banners hanging from the buildings. Consider that idea stolen

And by all means, Sherrypie; steal away. I would love to see your take on a building banner when it is done!

Banners look great, makes it feel like tiny humans really use them for stuff.

Progress has been made - and a Reaver Battle Titan now walks for Legio Astorum! With Tritus done, happily astride some lesser, insignificant Traitor Legio, I have also completed my first vow for Captain Semper's Titans of the Heresy event. I am well happy to have committed to that!

And without further ado - I present all the pictures I could manage with poor lighting: 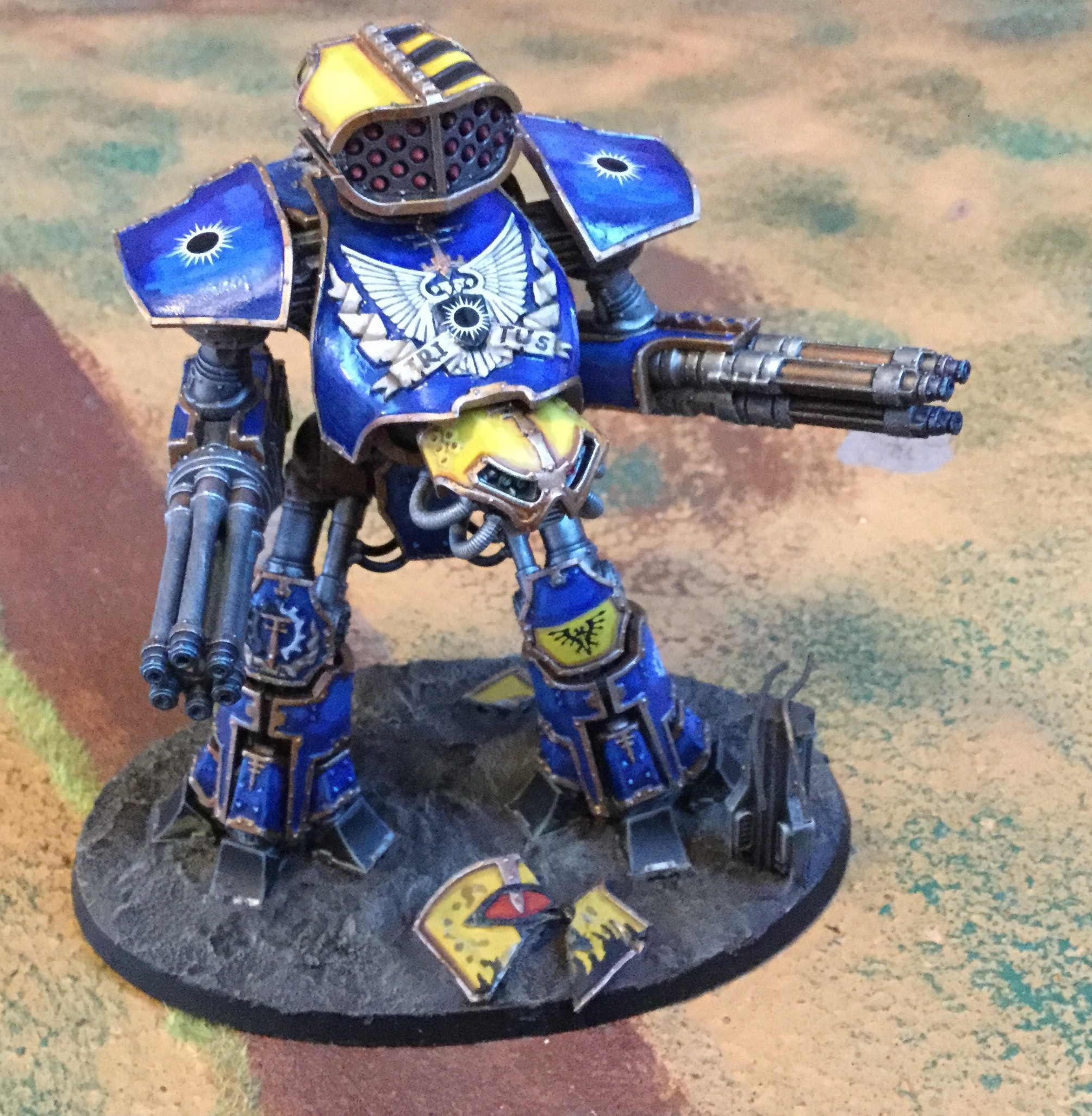 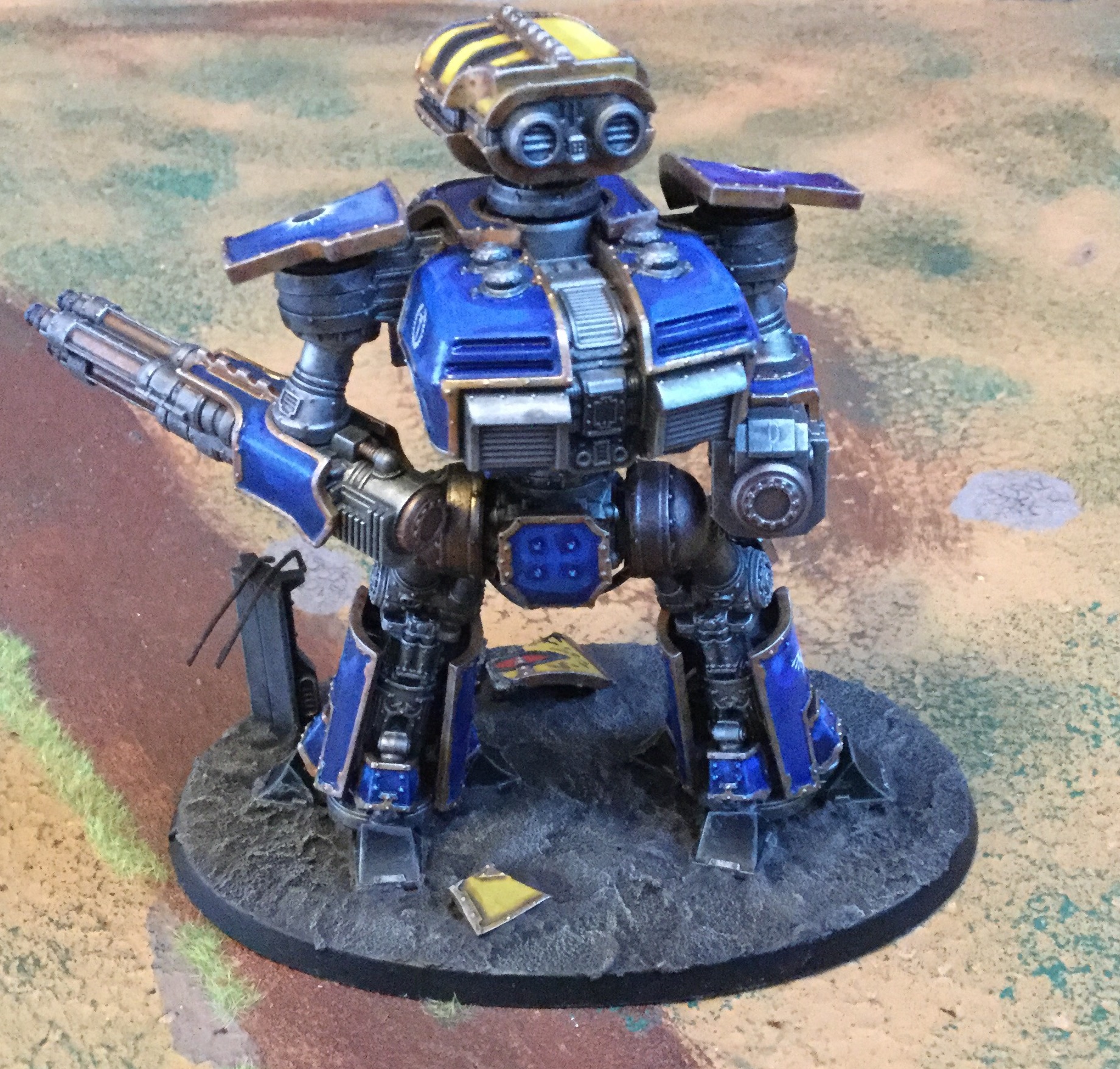 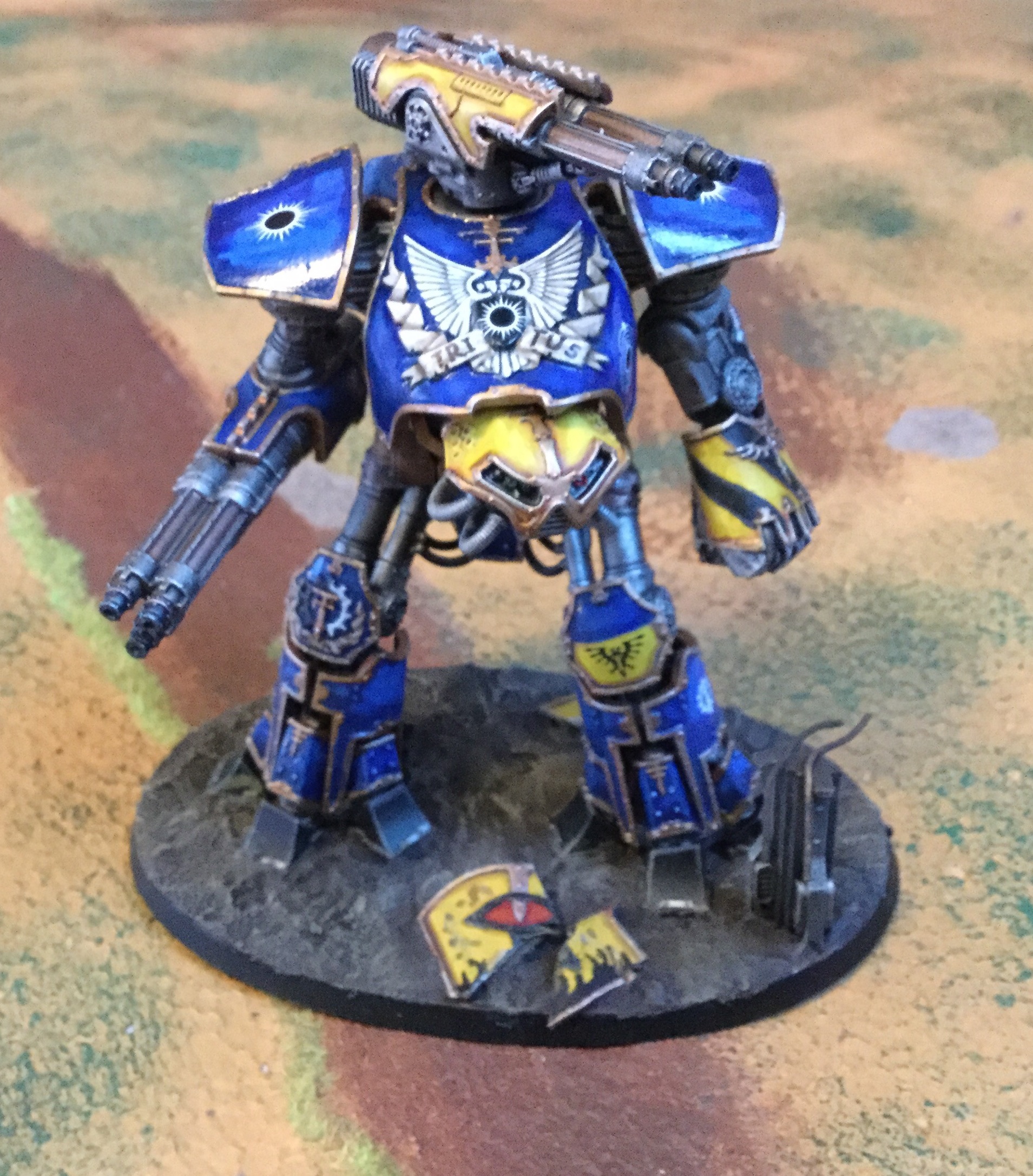 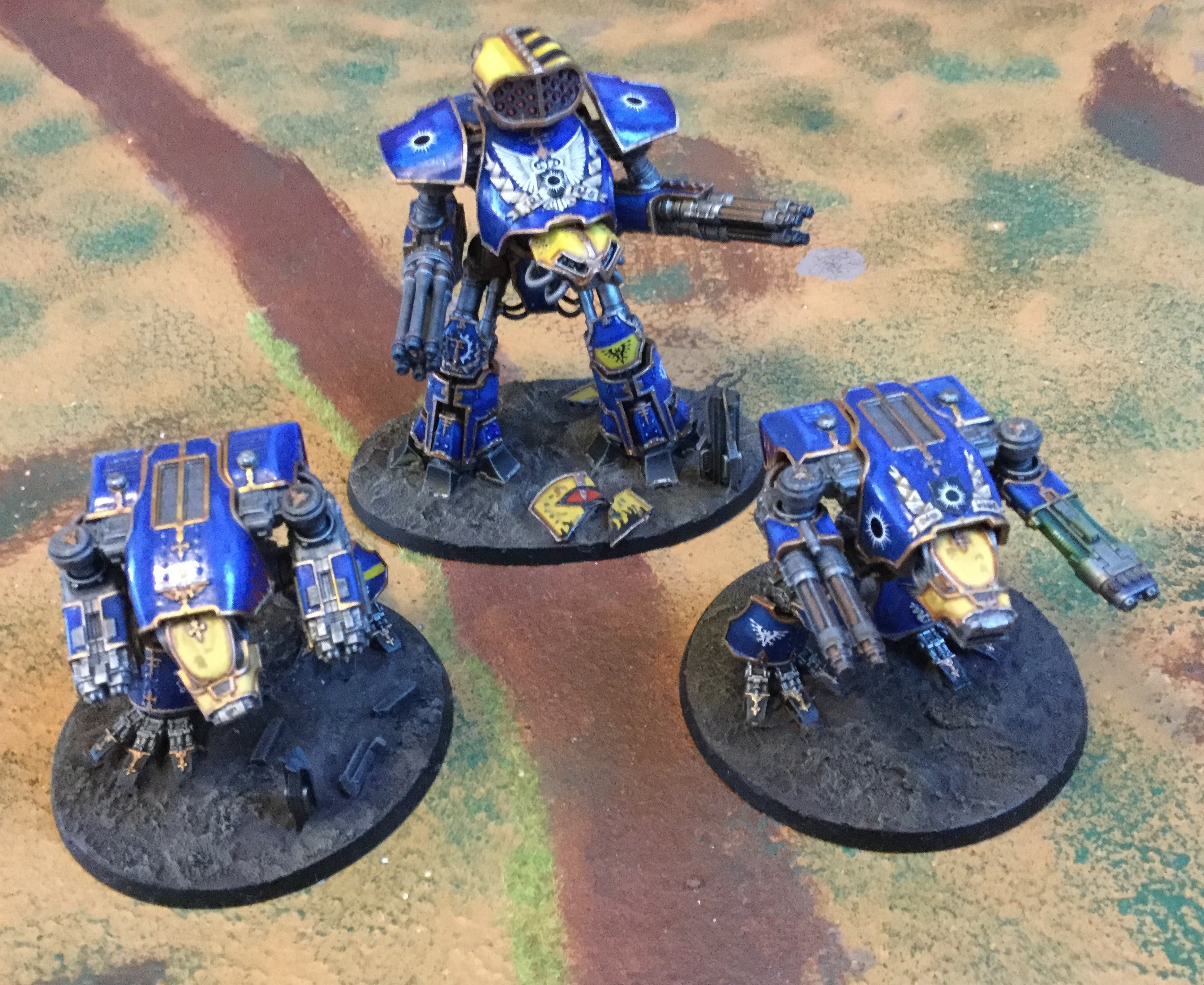 And my painted Titan and Knight collection to date 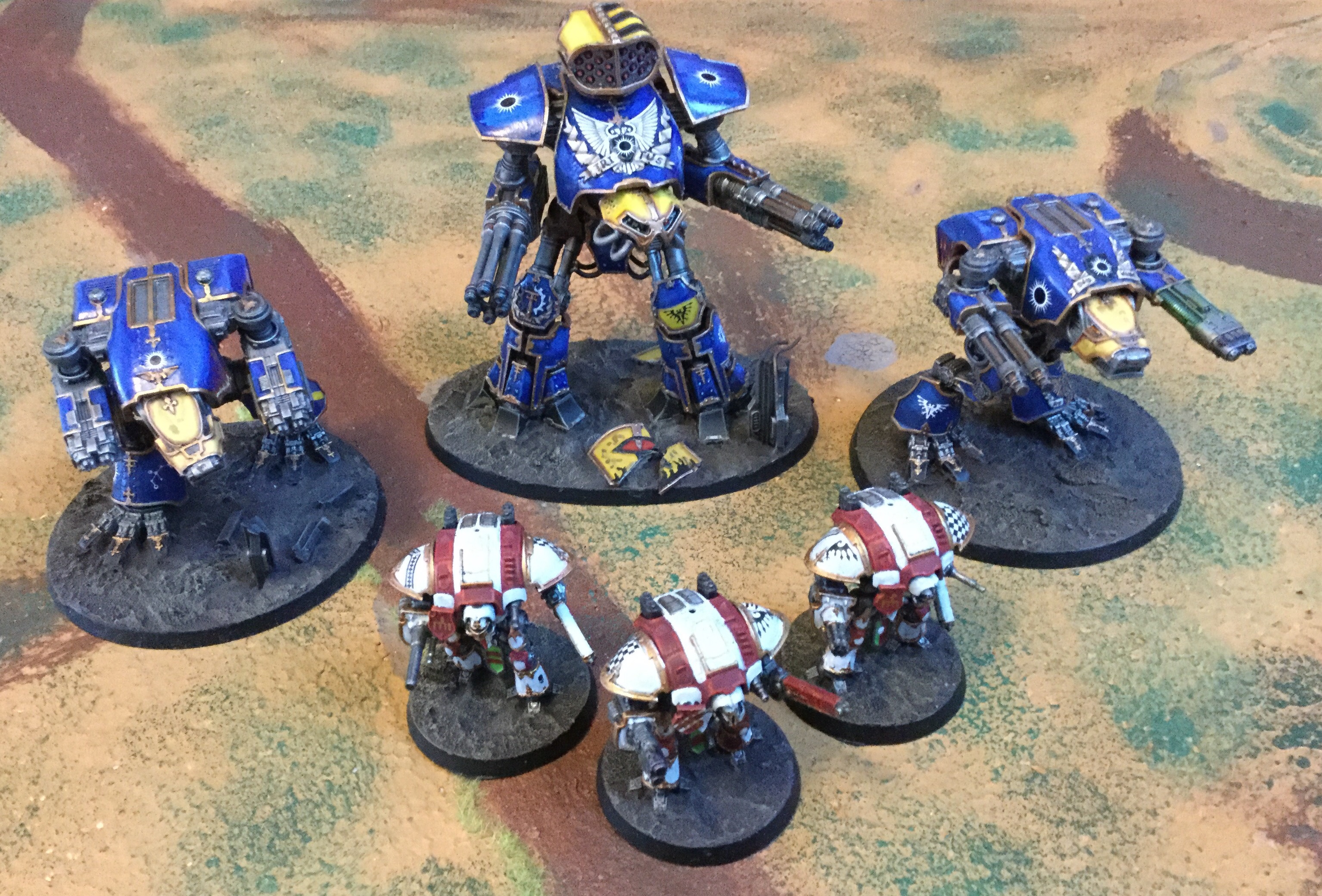 That's a great looking demi-maniple! I love your blue and the bases are nicely done, top work.

Indeed, the blue is awesome. Can‘t wait to start painting mine.

Thank you all for your kind comments! I am well pleased with the blue myself; I think, though, that the trick was to add a coat of gloss varnish after the painting and wet blending was dry. The varnish gives it that lacquered look, that I think works very well on massive engines of destruction :-D

After work finished today, I popped by the LFGS to have a peek, and lo and behold - they had not only the Cerastus Knight terminals, but also the Warlord accessory sprue with the fist and Sunfury Plasma Annihilators! As The Doom of Moloch was previewed today, I could not resist the tempation to buy both (also as a kinda reward-to-me for finishing off the first (and largest) of my Titans of the Heresy vows...) 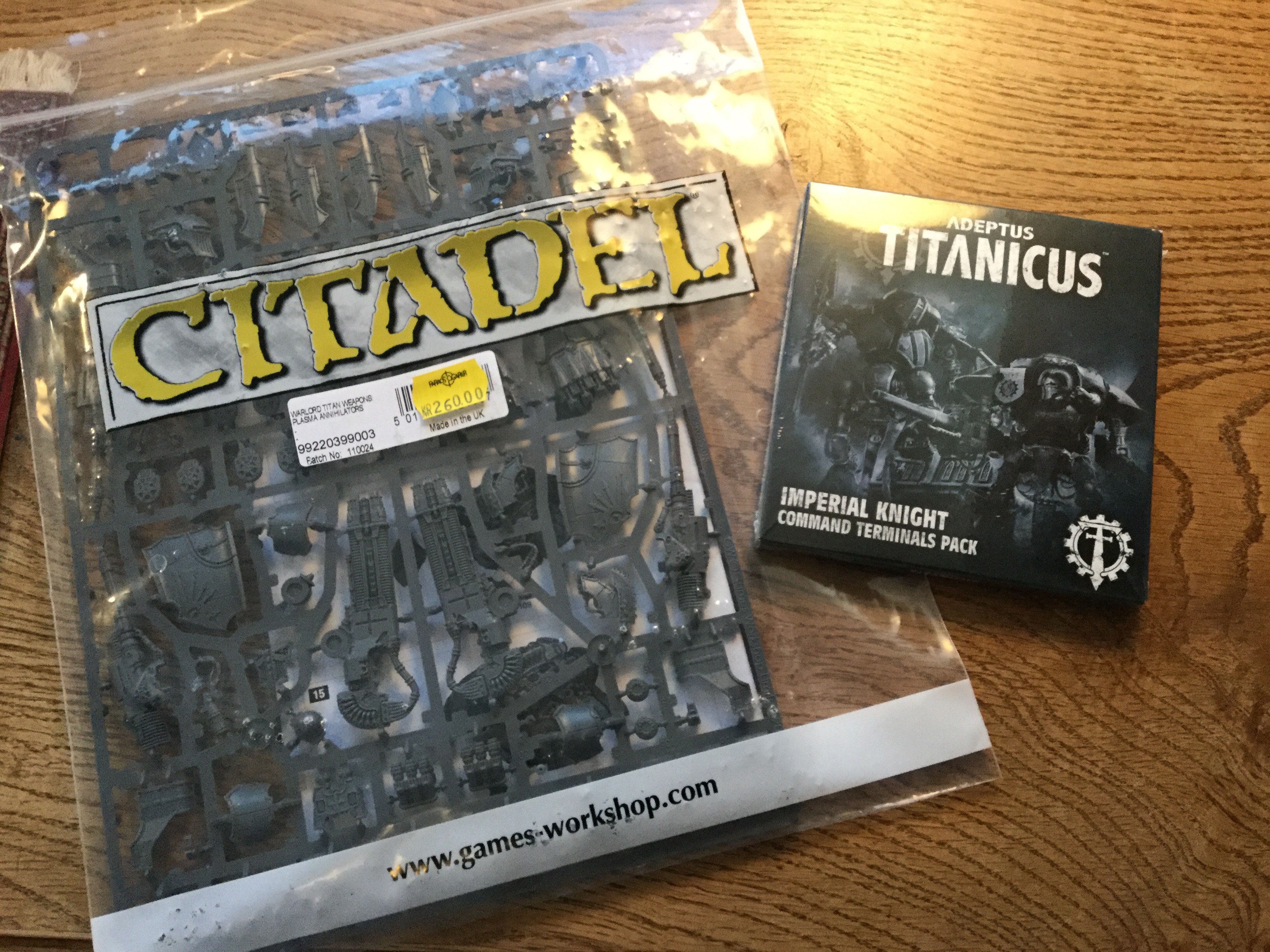 So - I have done it! I managed to finish my second and last vow! Though I am not a fan of painting knights (of either class), I do love the models. They are stunning! Without further ado, here they are: 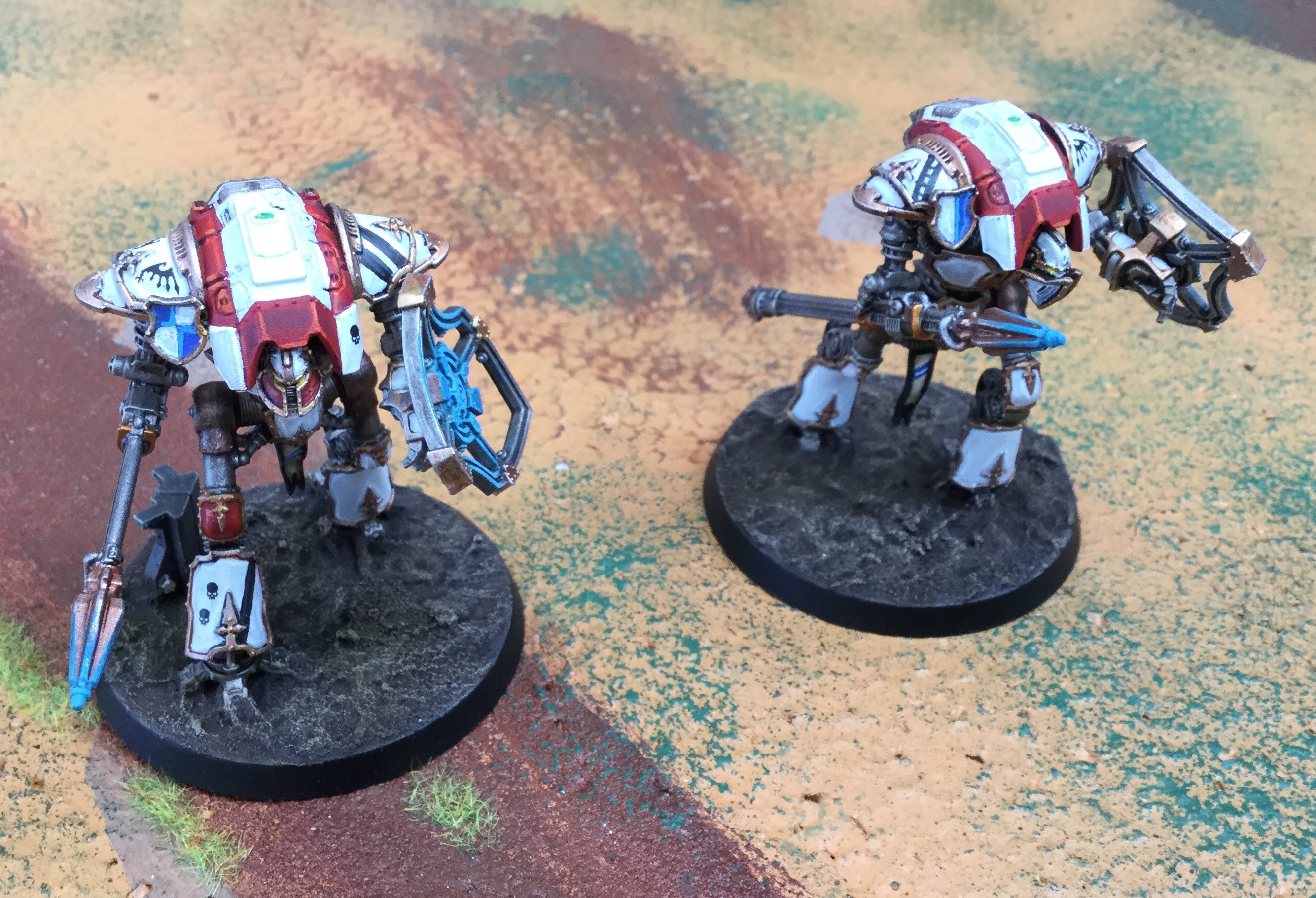 On the left, the Lord Scion, Gilderoy Fairlocke, in his ancient suit Heartbreaker. He would eventually survive the Horus Heresy, but his banner would not be so lucky, as no Scion Martialis fighting alongside him would survive more than two engagements.... 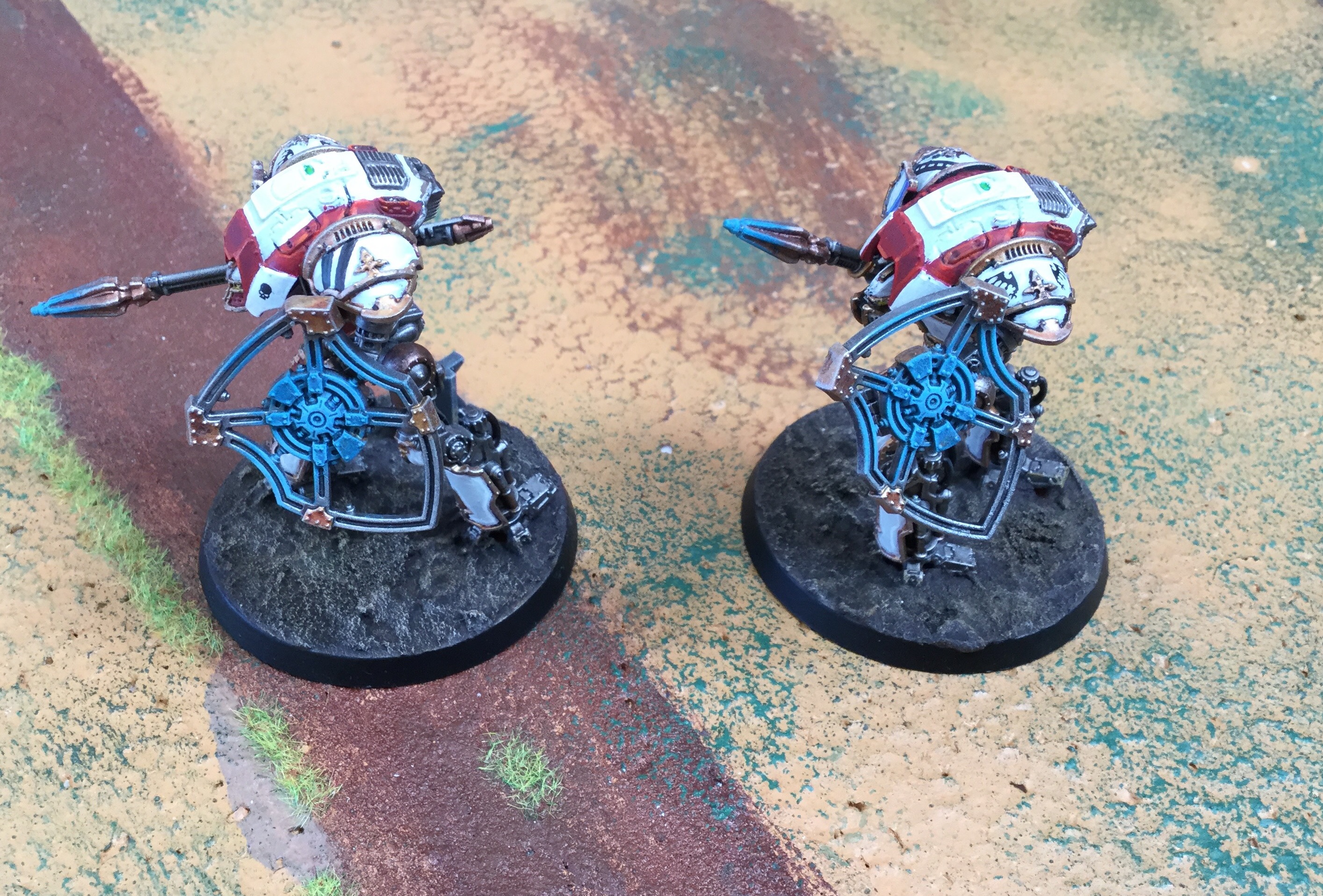 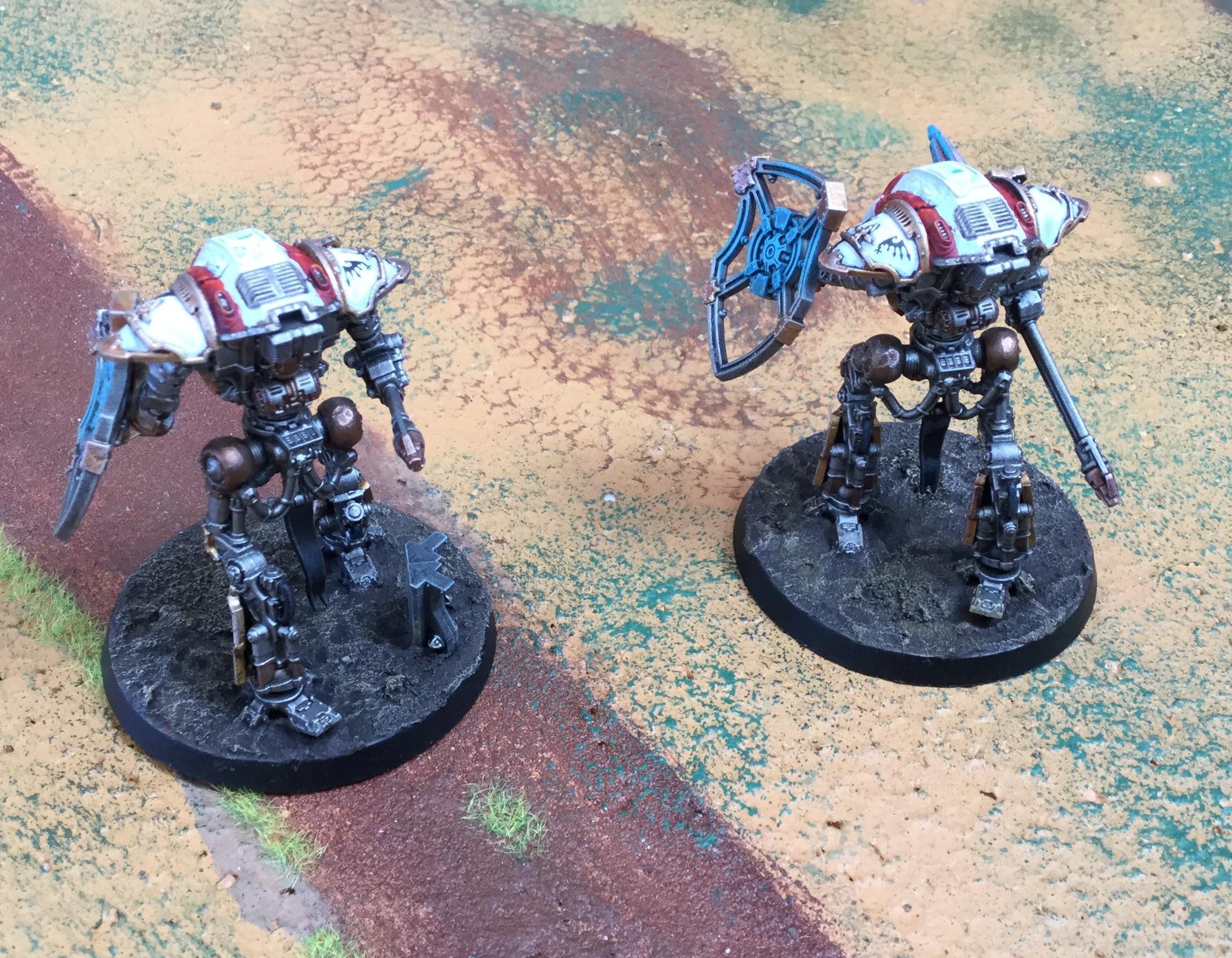 So - what to do next? I have six unassembled Questoris Knights, one Reaver and two Warlords still on sprues, and as for the buildings I have four unpainted ones. I think I will do my Leviathan District buildings and then get the Reaver built and painted. After that, I will probably start the two Warlords.

So - I have not been entirely idle with my Adeptus Titanicus, but since completing my two vows for Titans of the Heresy, I have been painting a bit of regular W40k. That said, the past week or so, I have been painting my Leviathan District buildings, and have finished two of the three, needing only to finish the large cathedral-ish building. I think I will try to spice it up with some flags and pennants to make it more interesting. 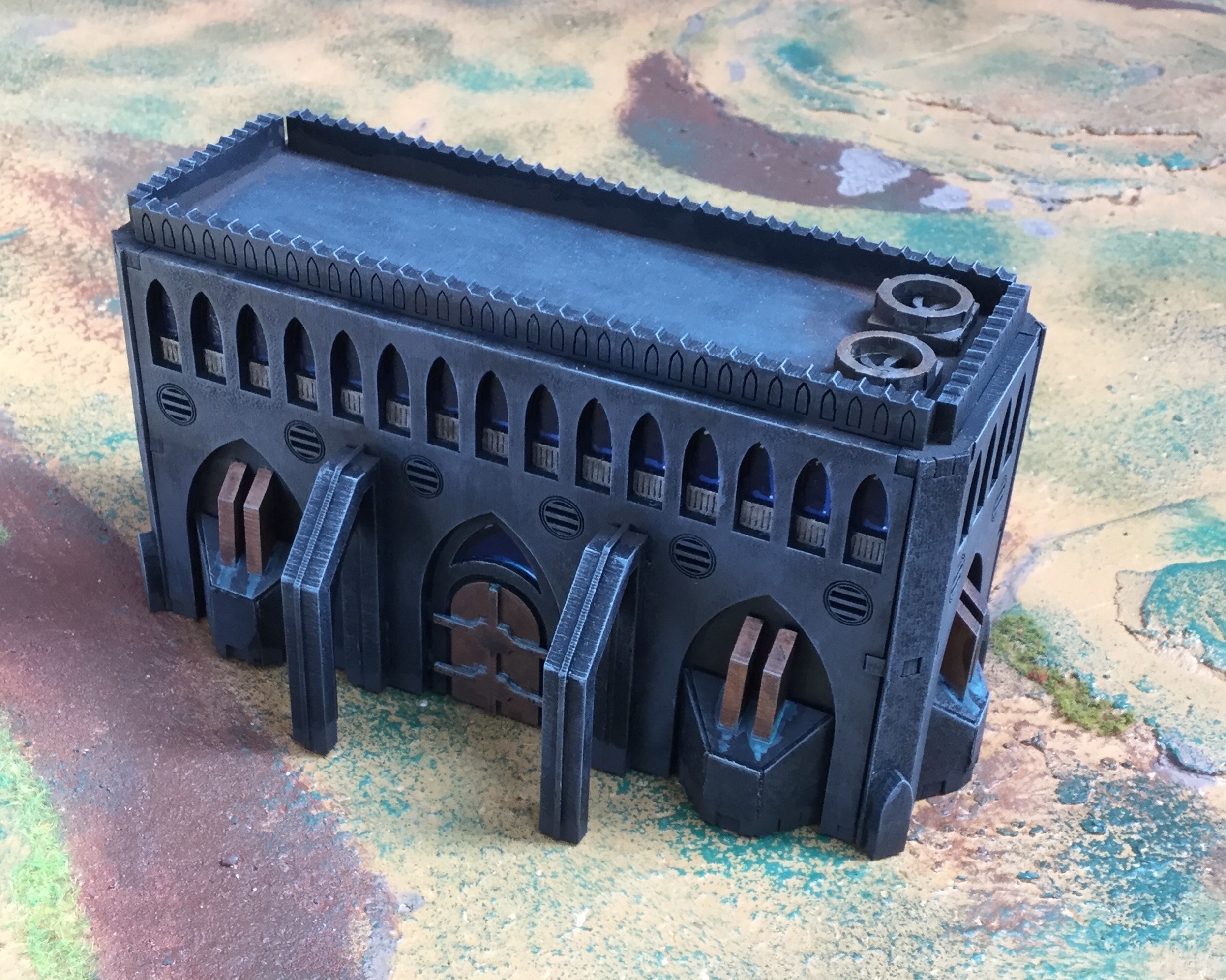 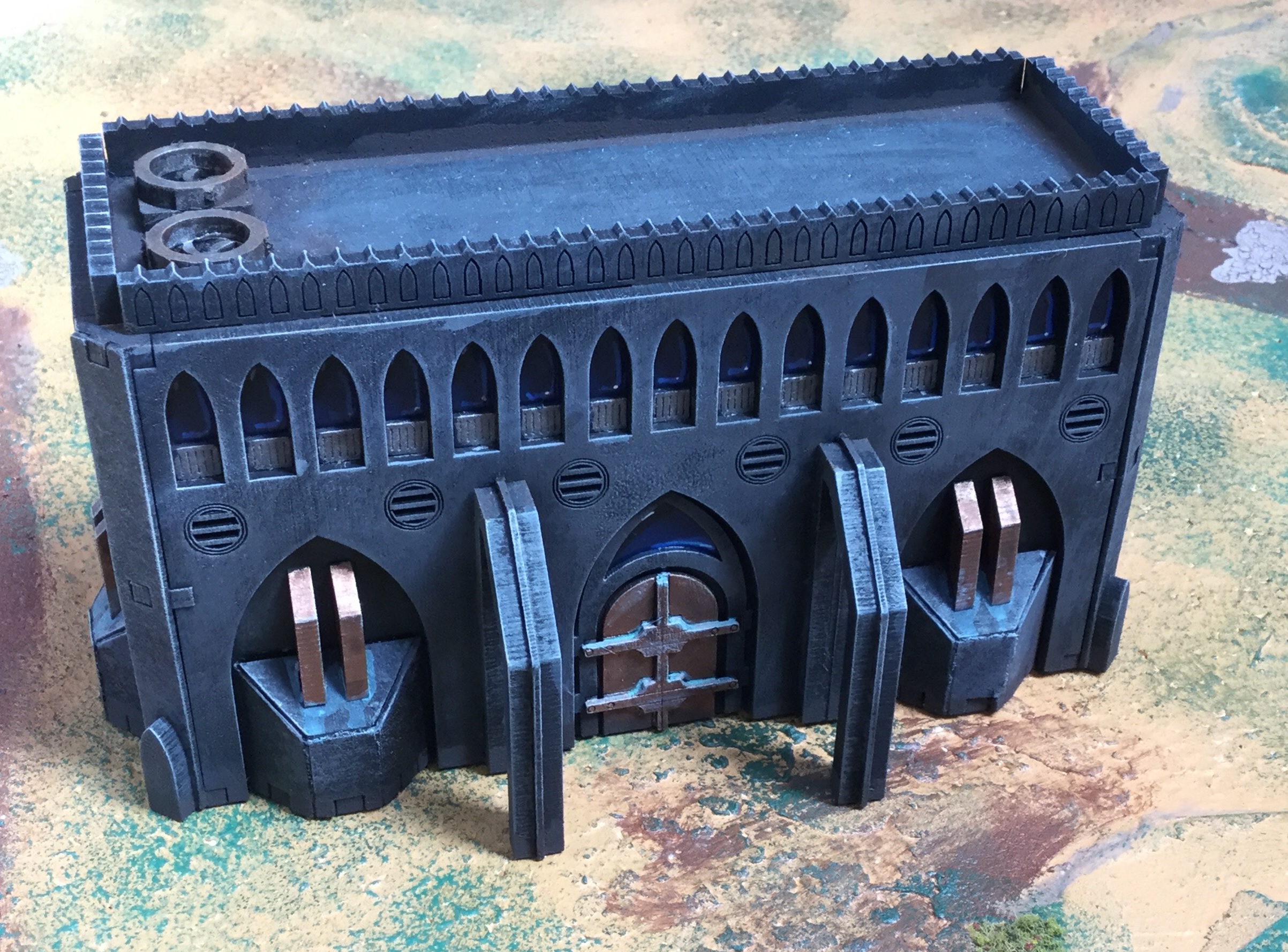 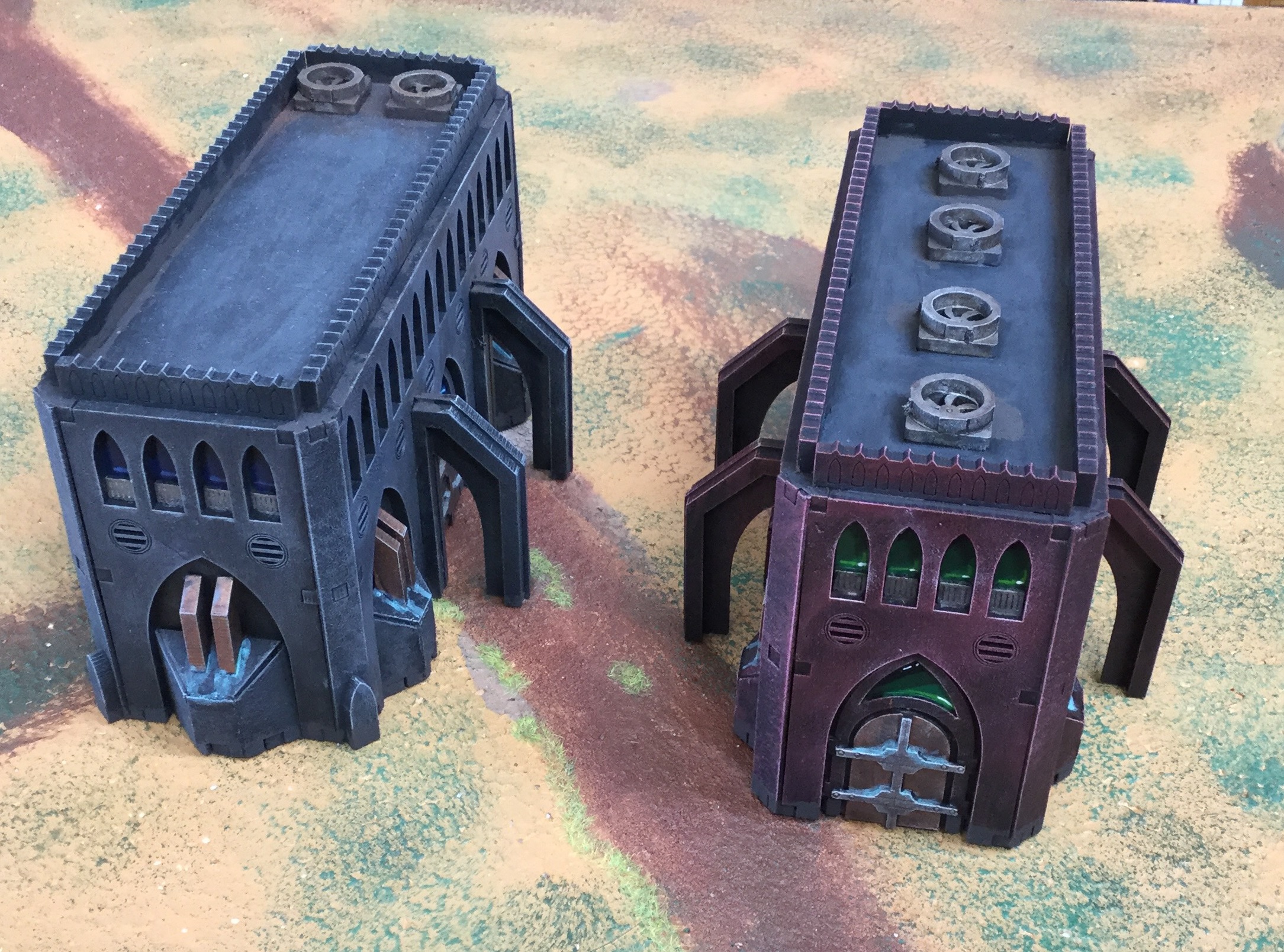 And for size comparison with a Warhound titan and a Cerastus Knight-Lancer: 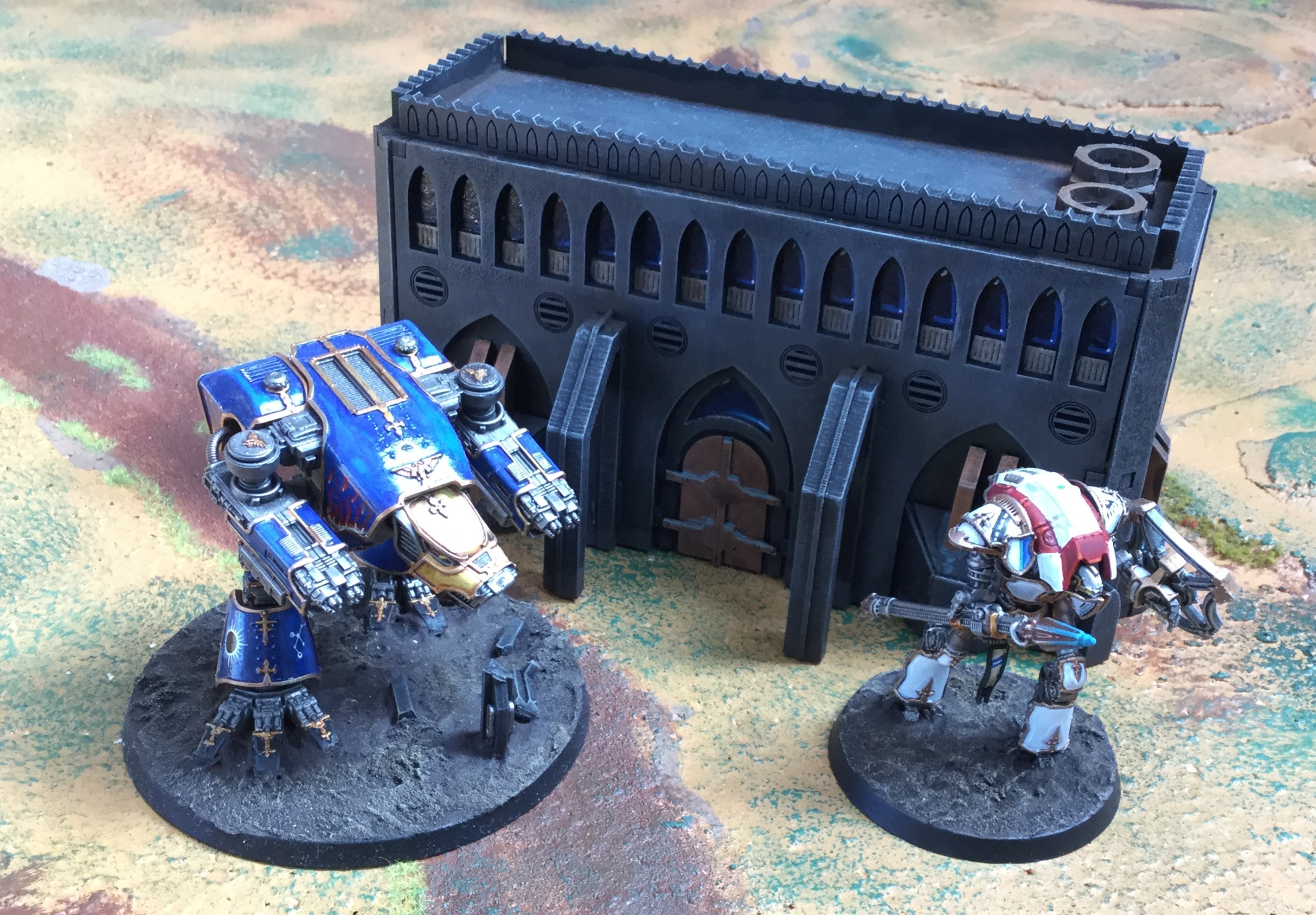 They are looking good, and massive as well!

And thank you both! They are indeed massive! I managed to finish the last of the three - which is even larger than the two others: 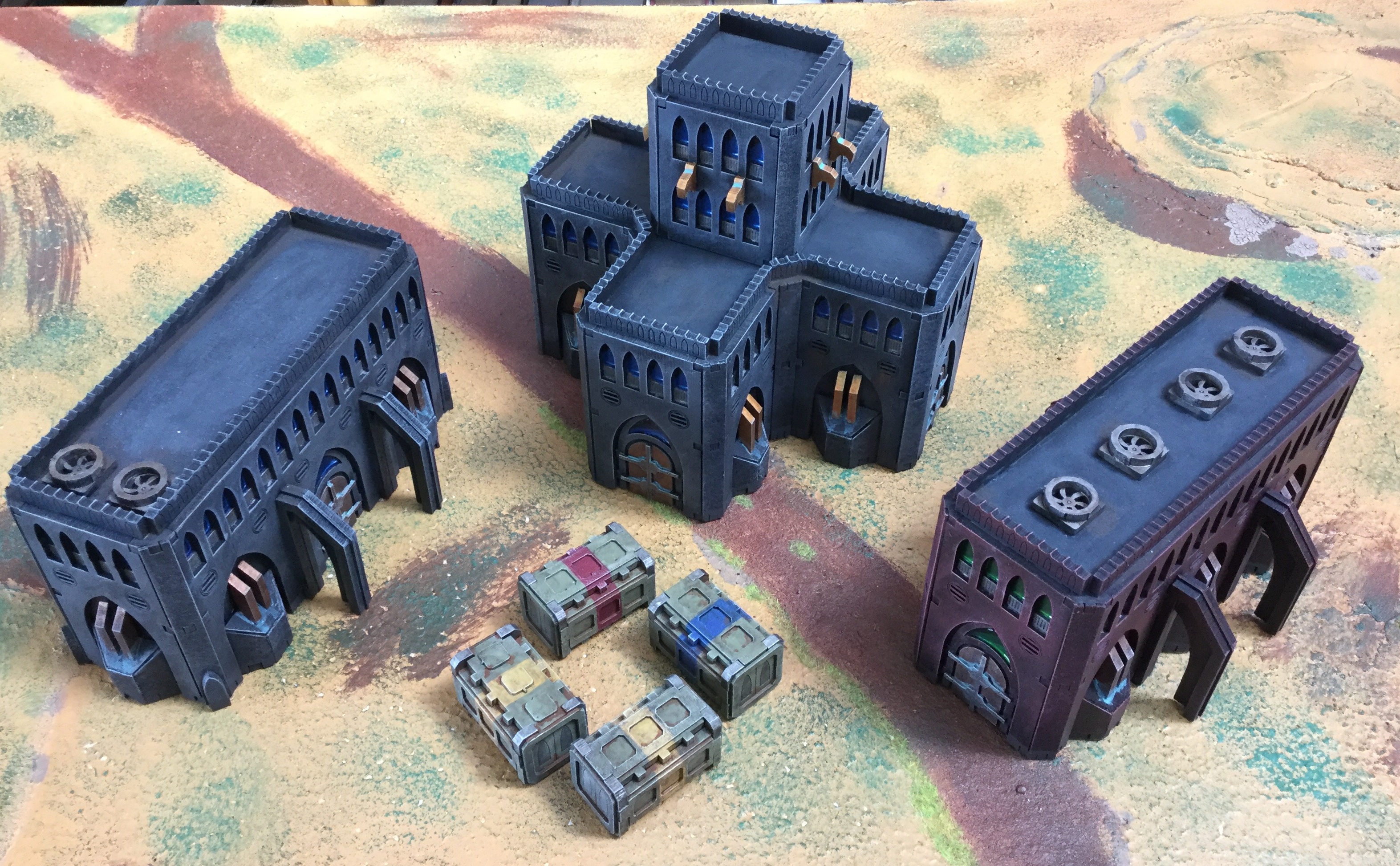 They are all now most certainly table top ready - though I have made a tiny flag to mount on one of the corners, and I am contemplating making a few banners to hang down the walls, sort of to "frame" the doors. But that is even more work to put into terrain - instead of painting my last six Questoris Knights, one Reaver and two Warlords....

Next though, I will be finishing off the objective marker-thingy and the six stratagems.

Work put into terrain is always relevant, that tends to linger in your view even while armies wax and wane