857 replies to this topic

Trawlingcleaner - those chaos marines are gorgeous, they from shadowspear?  What colour scheme are you going to give em?

Trawlingcleaner - those chaos marines are gorgeous, they from shadowspear? What colour scheme are you going to give em?


Thanks man! They're just normal the new normal chaos marines that I've bashed with a forgeworld Rocket Launcher and chainaxe and a loyalist combi-plasma. They'll be Black legion too

The Rusted Harvest (AKA my bright orange DG)

Starting back up Dark Eldar

Is the armour going to be mostly blue like on the original character?

TrawlingCleaner: Aye, those Chaos Space Marines look terrific! Which chainaxe is that though? From what I can remember, the chainaxes from FW are all left-handed ones.

TrawlingCleaner: Aye, those Chaos Space Marines look terrific! Which chainaxe is that though? From what I can remember, the chainaxes from FW are all left-handed ones.


Thanks man, that one is left handed and the box I bought (a good few years ago) has both hands

The Rusted Harvest (AKA my bright orange DG)

Starting back up Dark Eldar

Is the armour going to be mostly blue like on the original character?

Gonna paint him exactly like the original model. So the bone-white robes (with green inside), blue armour and red tubing.

However, I'll be going a darker blue (Kantor Blue with a pinch of black added in) for his armour to make him 'blend in' more with my all black-armoured Dark Angels.

An update, base coat is pretty much done, I need to re-spray a few wall sections and figure out how I want to paint the guns.

As per the divine fortelling of the Emperor's Tarot (also known as the Grot Randomiser) I, Brother Argent, vow to complete by months end: one piece of terrain in the form of the ruins of Hab Block A5-Gamma of Hive Dominus on the planet Kalx.

I'm hoping for a speed demon award with this one.  On my way out to undercoat with Mechanicus Standard Grey.  Then just gotta to bash out the paint scheme over half a day till I disappear out for the rest of the day.  Wish me luck... 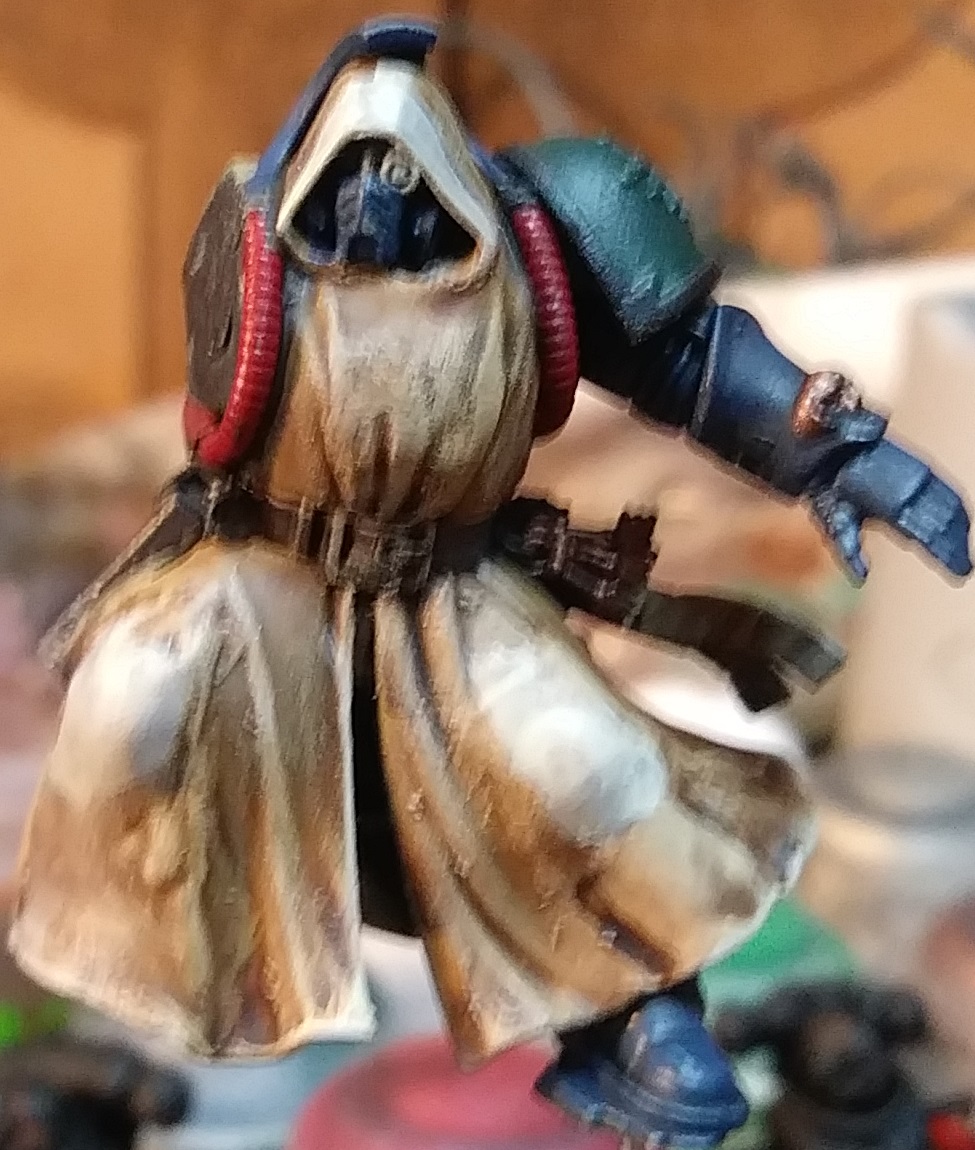 Hopefully will have him done this weekend.

So no where near when I wanted to finish it but here is the finished building:

So... not the neatest painting job ever but its terrain so...  That and my brushes are stuffed so I cant paint neatly to save my life.  Need a trip to the hobby shop, but its nearly 100km away.  Oh well, works for for me for now.  Flash has kinda washed the pictures out too.  That weird white/great stuff on the copper areas is actually Nihlus Oxide and looks alot better in RL.

So Grot, hit me up with another Random Roll if you would kindly...

I Brother Callidan vow to paint 1 Chaos Marine for April. 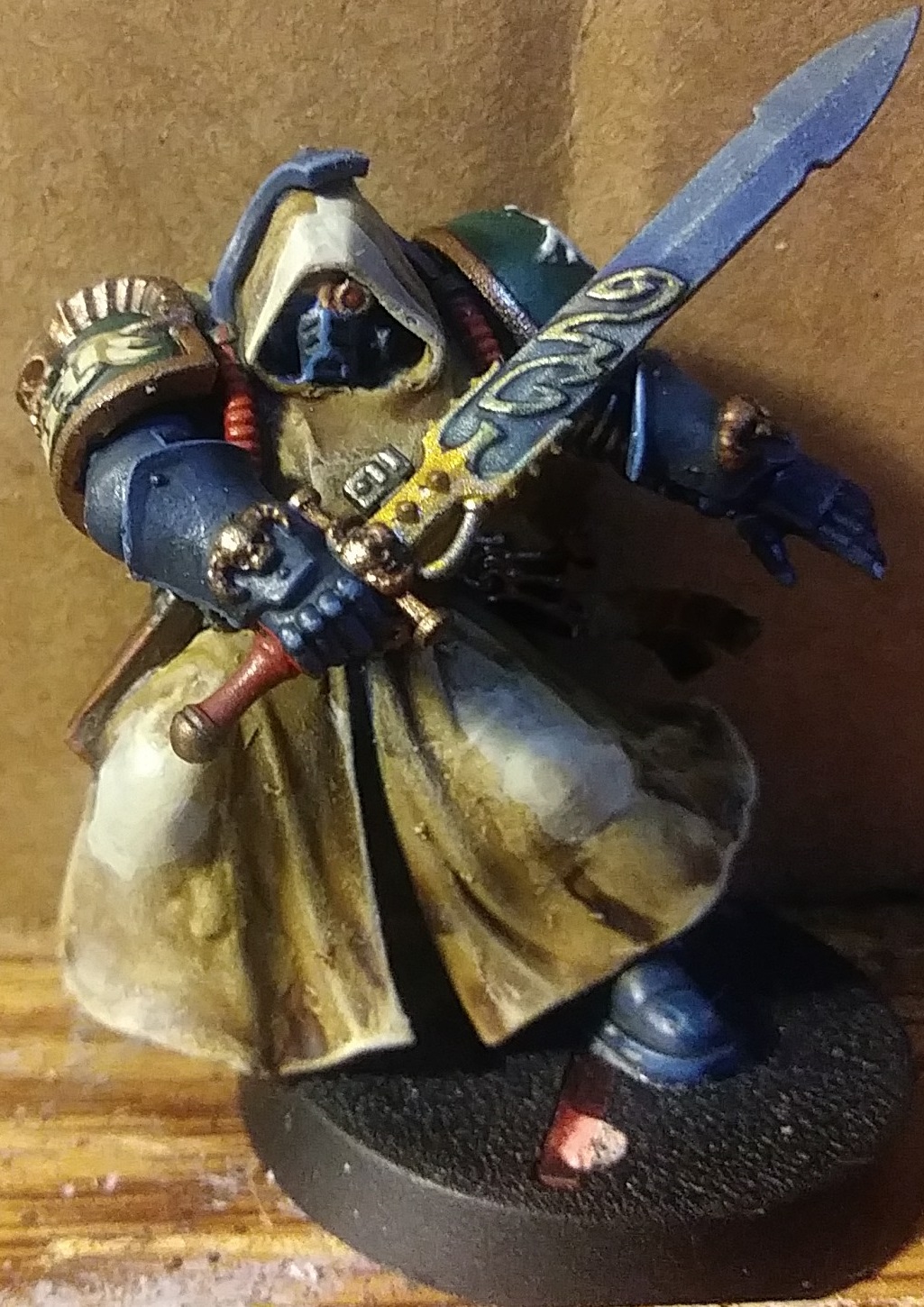 Needs some highlights on his body, but aside from those, he's done. Then I just need to do the ACTUAL hard part, the frigging banner

Part of my vow complete 5 Reivers. I did a quicker method of painting but I like how the heads turned out.

Red Unforgiven???!!! What is this Heresy

I didn't even get around to pledging anything in March.

But here's my April pledge: a set of Necromunda Underhive terrain.

It wasn't a pledge, but I've just finished basing another 44 marines - two full assault squads, some devastor squaddies and a lot of heavy weapon options. Which takes me up to 100 marines based, and around half way to completion.

Quick update. I still havent decided what I am doing with the Poxwalkers so I completed Horty and a Gnarlmaw. I am also just basing away from another 20 Plaguebearers done. Pics soon.

Now I've finished staring at all the new chaos loveliness and planning on what kits to buy to add to my DG and Corsairs army, I thought I'd best make my April pledge.
I, Dwango , embark on the 12 Months of Hobby Challenge, and for the month of April pledge to complete one squad of Heresy era DA assault marines (10) and 2 x scorpius' by month's end. Well actually by the 15th as these are also part of my loyalty and treachery vow!! 3 days is enough time to get these done......right?

I have finally finished my Loyalty & Treachery IV obligations, so time to catch up with everybody else’s progress.

Grotsmasha, that Traitor Guardsman turned out nice, that yellow on the base is really disconcerting, what is he walking trough?

Sabadin, That looks suspiciously like the new Abaddon, hope to see some colour on him soon.


I, Trokair, embark on the 12 Months of Hobby Challenge, and for the month of April pledge to complete one Deathwatch Chaplain by month's end.

This is as he was when I built him last Autumn, at the time I was considering several different heads. In the end I settled on a Reiver head instead of any those. I’ll try to have a work in progress shot soon.

Hey everyone. Real life rather caught up with me in mid-feb, and I've only just started to get some free time again - the joys of having twin threenagers and long hours at the office! So my February pledge of GSC neophytes is only half done. I'll probably pick those up again later, but I've decided to get back on the horse with something simple. Going to try and do some speed painting and see how that comes out! Wish me luck...

I, Arkhanist, embark on the 12 Months of Hobby Challenge, and for the month of April pledge to complete 4 Ur-Ghuls by month's end. And... done. Considering I've only had a couple of hours to myself today, i'm really happy with these. May see what else I can squeeze in later from BSF! Wow, lovely work on those Ur-Ghuls.

Did you use Warhammer TV's method to paint them (white undercoat and then washes)?
BSF really is great in that regard: in just a few hours you can complete anywhere between one and a small handful of models and feel like you've completed a mini-project.

Thanks! Combination of warhammer TV and midwinter minis. Grey stynylrez primer, then airbrushed zenithal highlight with white. Glazed with coelia greenshade thinned around 2:3 with instar water+. Drybrush ulthuan grey. Wash of druchii on the hands and face - I bluetacked the pot down, then got startled while closing the lid so still ended up with half a pot all over the desk, d'oh.

A little bloodletter round the nostrils. Neat coelia on the feet to bring back the toes, then final light drybrush of white on the face, arms (to blend in the druchii), knees and shoulders. Oh, and little dots of seraphim sepia on the shoulders and back of head, lastly screaming skull for the teeth.

Not entirely convinced about the thousand son glaze step - it definitely came out a bit blotchy with glaze medium, will have to work on that some. Just need to varnish for protection, but will batch em when I next can during daylight.

Think I'm going to try some colourshift paint on the spindle drones next. The ur-ghuls are the first minis I've finished that I like all year so far, so on a roll now!


I, Reclusiarch Jolemai, embark on the 12 Months of Hobby Challenge, and for the month of April pledge to complete one Lemartes by month's end.

Today has been fairly successful so quick update: