50 replies to this topic

Utterly incredible, the modelling, the concept work, everything.Your work on simplifying and establishing the silhouette of the legion emblem in particular is excellent, though I feel that the wings could perhaps do with a very narrow outline to ensure they 'pop' from the red background.

Inspiring! Not many would go as far as to build crew for their tiny engines, you absolute madman.

Do you mind letting me know how you achieve that red and the yellow?

any updates from OP? I am also doing Fire Wasps

would love to use your banners !

Damn warpstorms... It seems I have been lost for quite some time, but I lost the mojo for the project, up until the new decal sheet got released,and immediately sold out before I could get one. I was hesitant if I liked it, and the two days it took me to decide I should probably get one just in case, ended in me not getting one... So I decided to draw the new logo myself as a vector, while searching for a second hand decal sheet. I had just about given up and then out of the blue I was offered one and I must say that really reignited the reactors for me.

So, here I am, back at it and I have a few updates, because even though I had burned out a bit, occasionally small progress happened

First off, that vector logo I did, some progress of the tracing and the finished one. It was a great exercise in using colour with vectors. 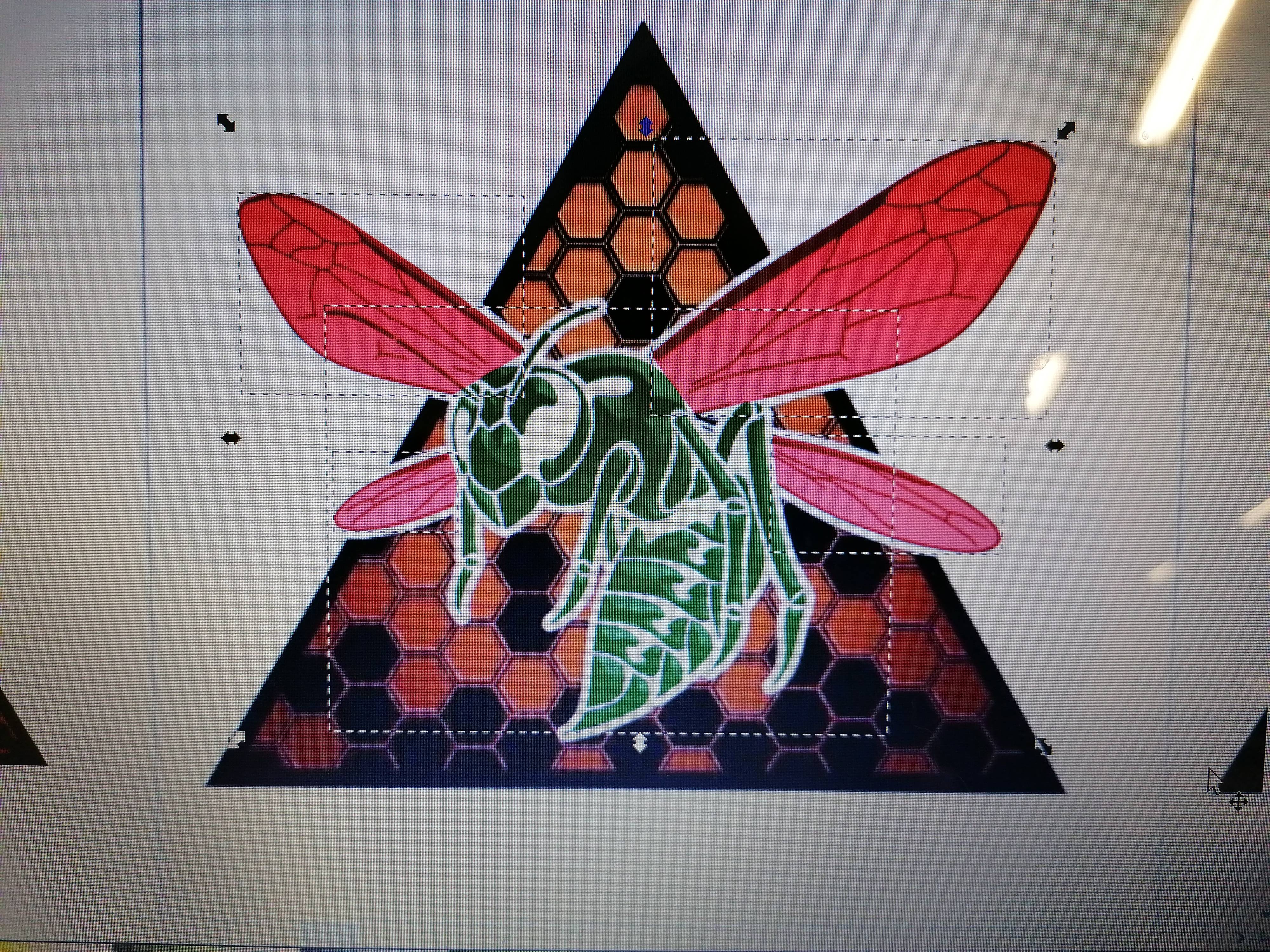 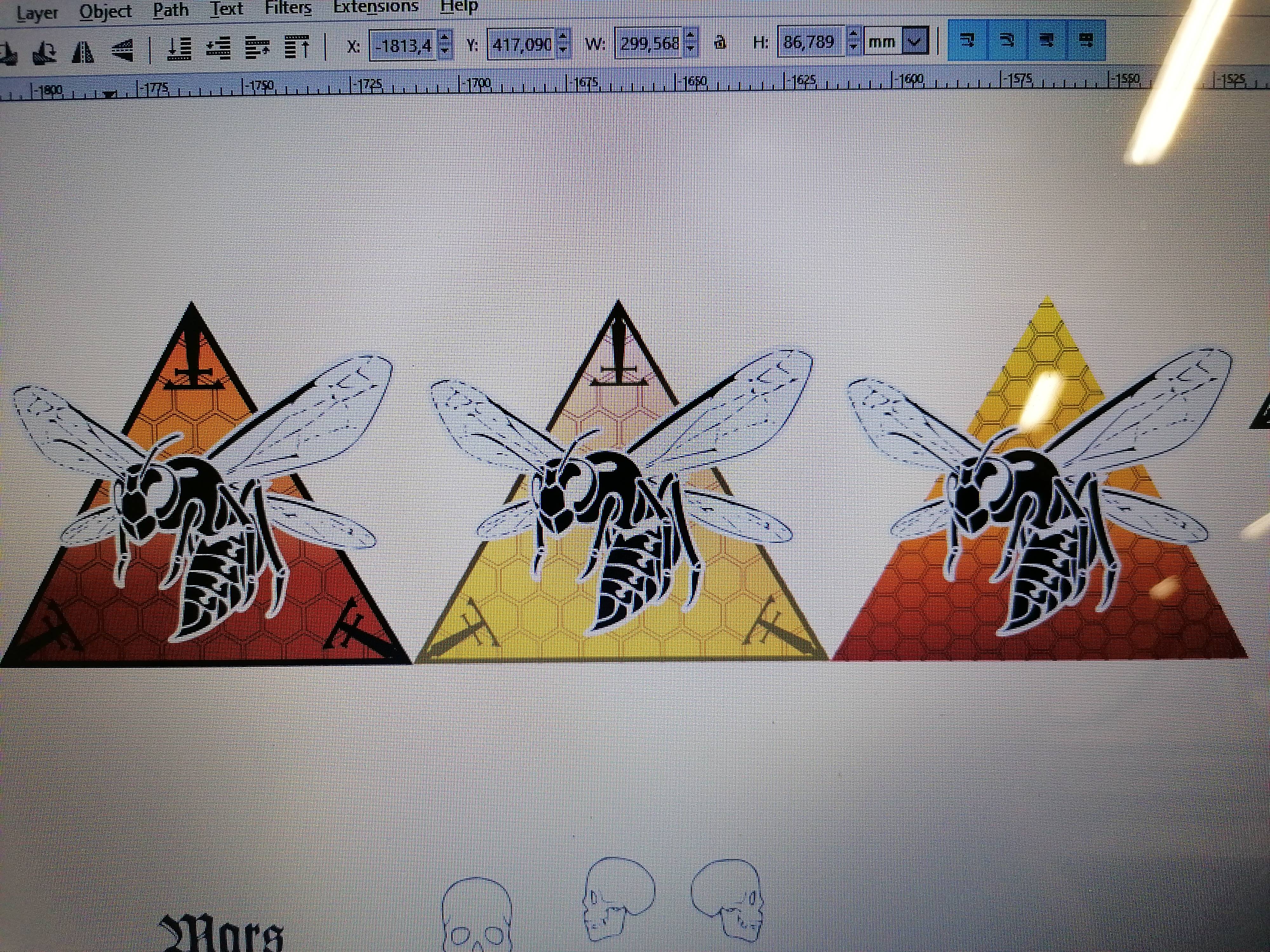 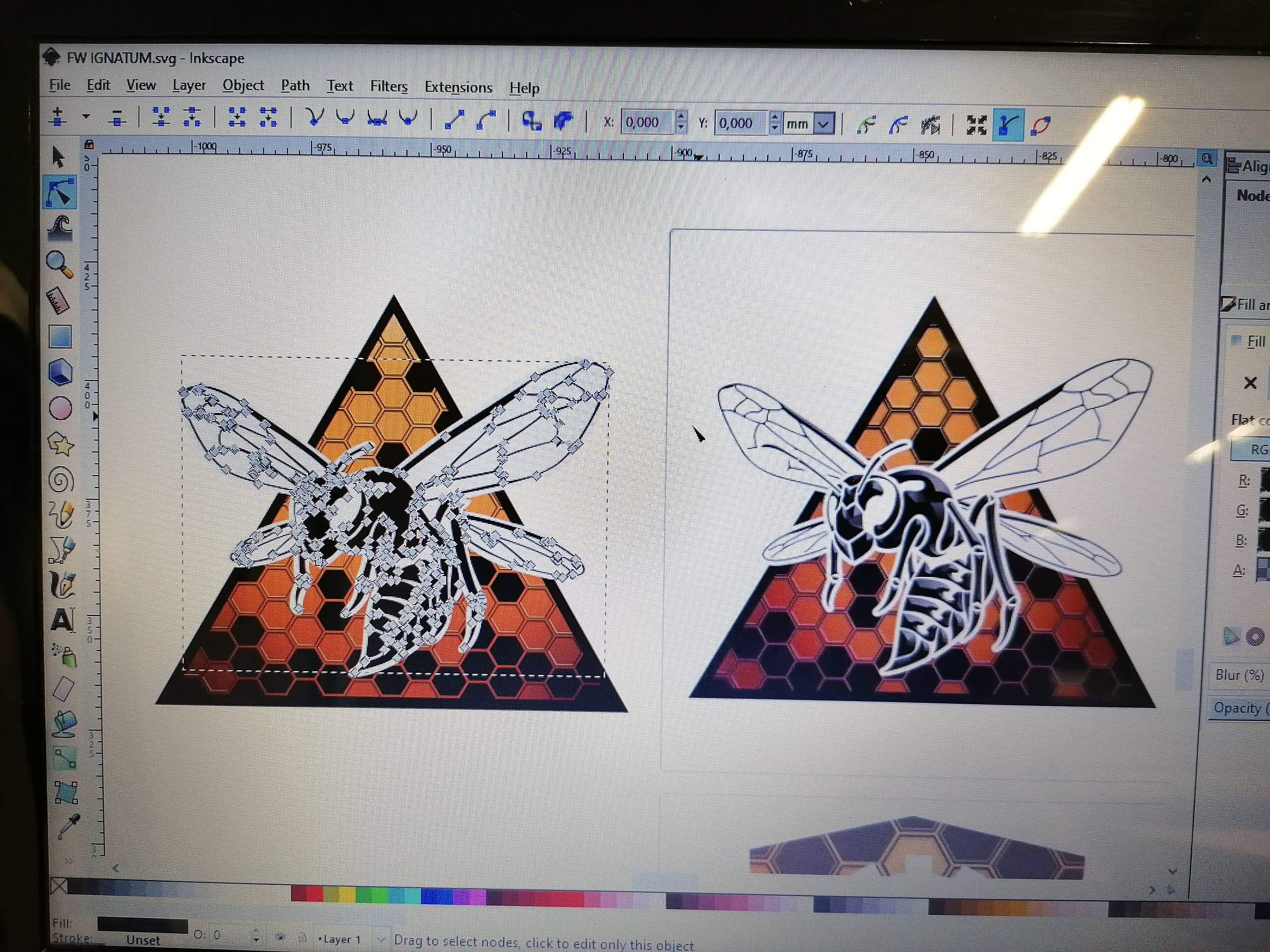 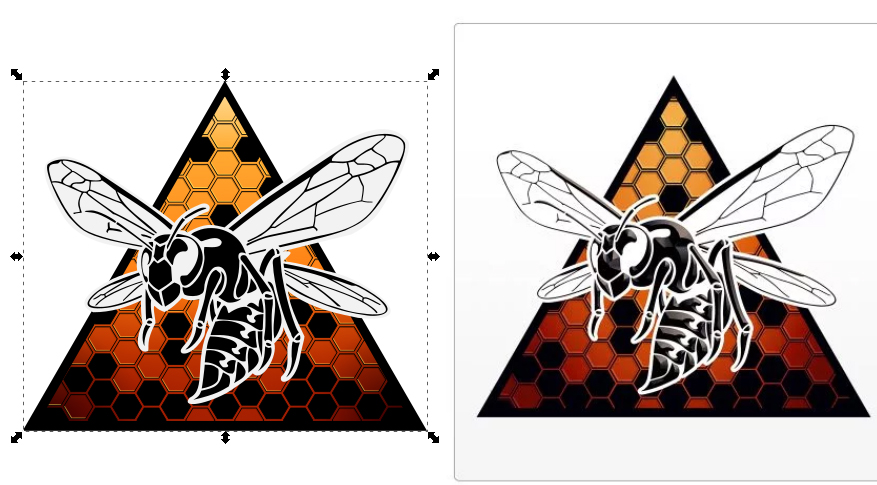 The reaver had some more work done to it as well, hex pattern on some of the red armour plates, and also the min carapace. This has been done with a custom stencil I have designed and lasercut. The knee logo is done with a custom vinyl stencil I drew and cut at work, where I also cut the hex stencil for the yellow black hex pattern.

He also got a base. 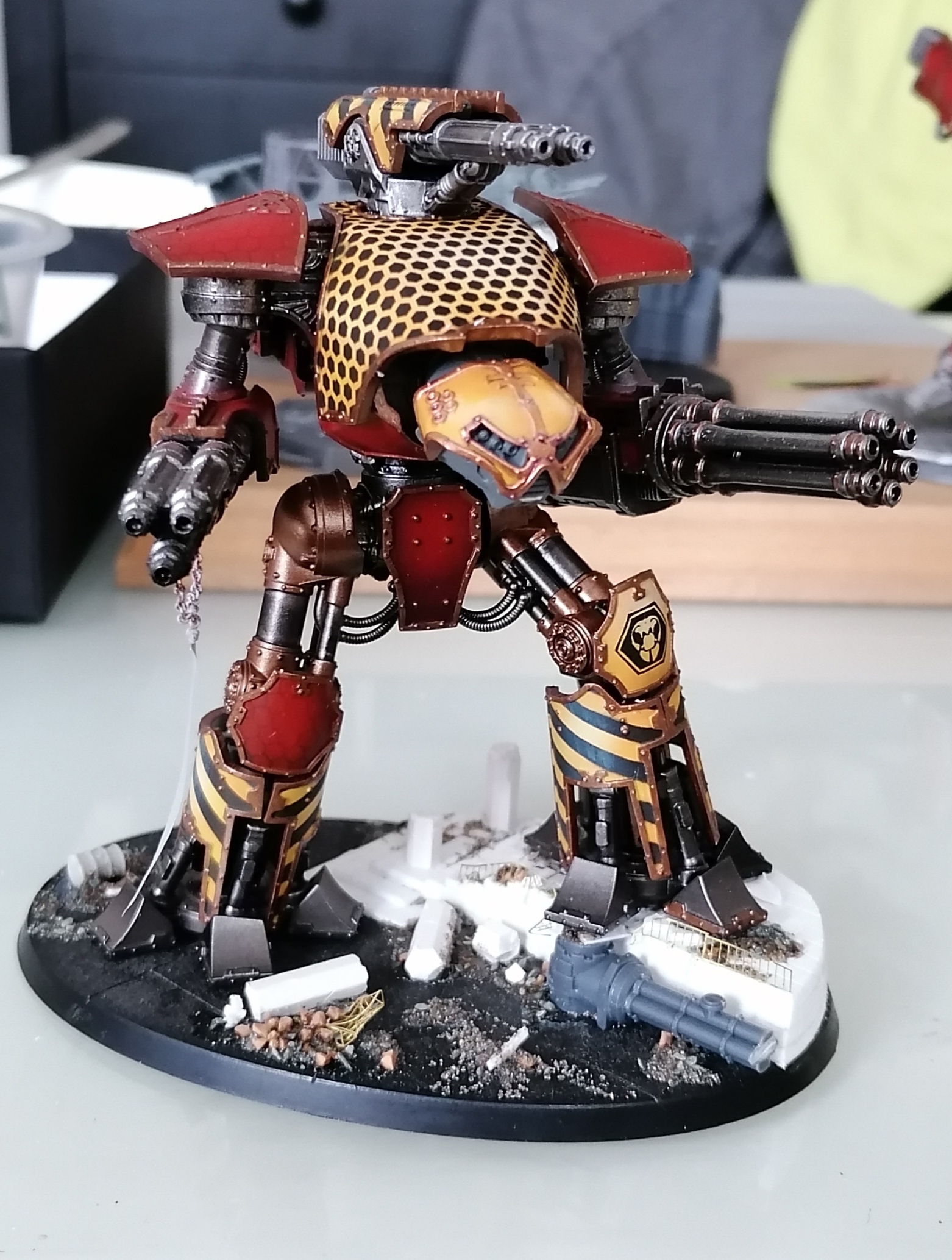 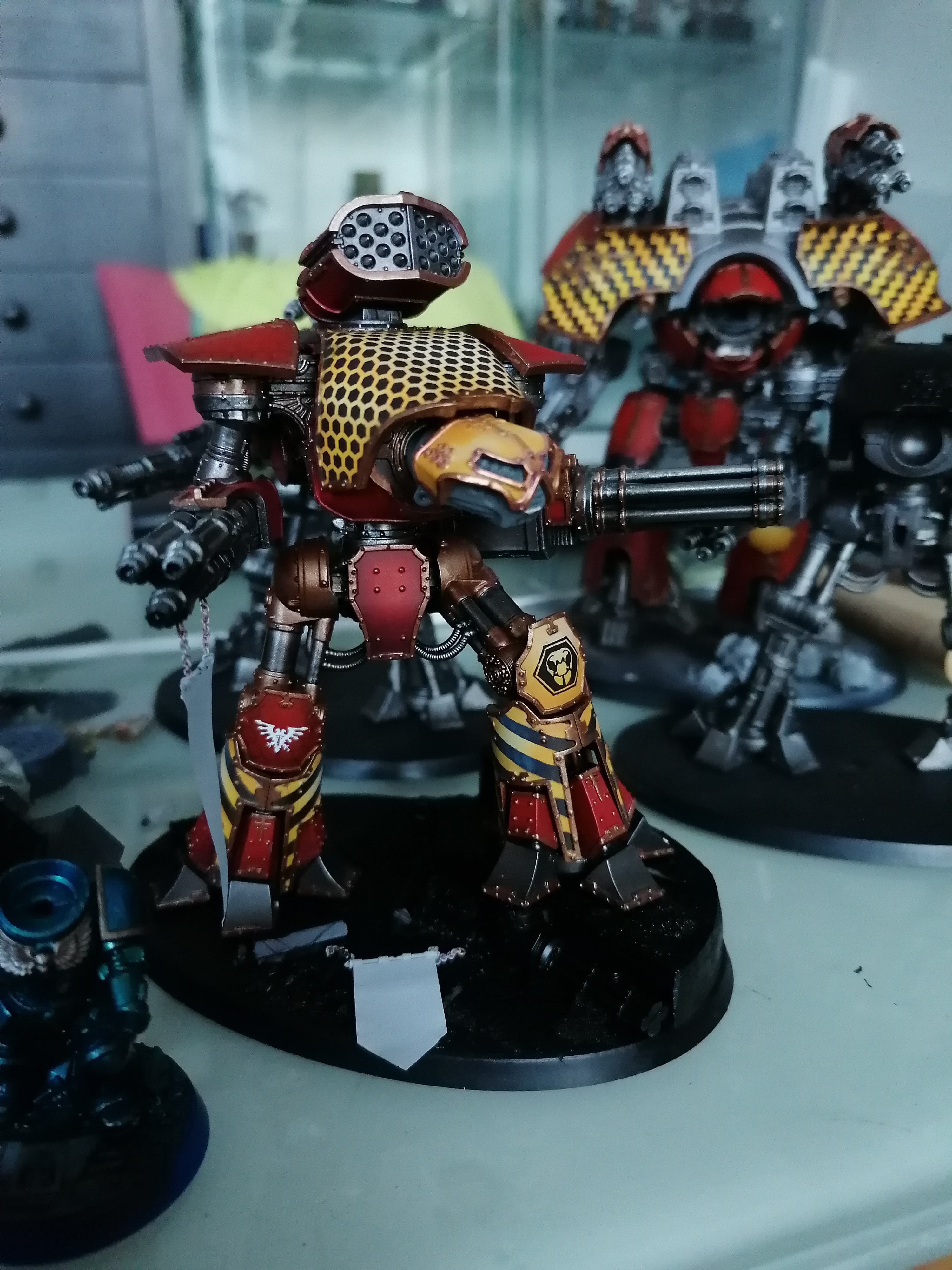 The warlord also had a makeover, or it just got a new pair of legs (I have a few unbuild ones

) I went to town on the hex pattern and curvy stripes on this one, and also applied my first decal, and man I am in love!! 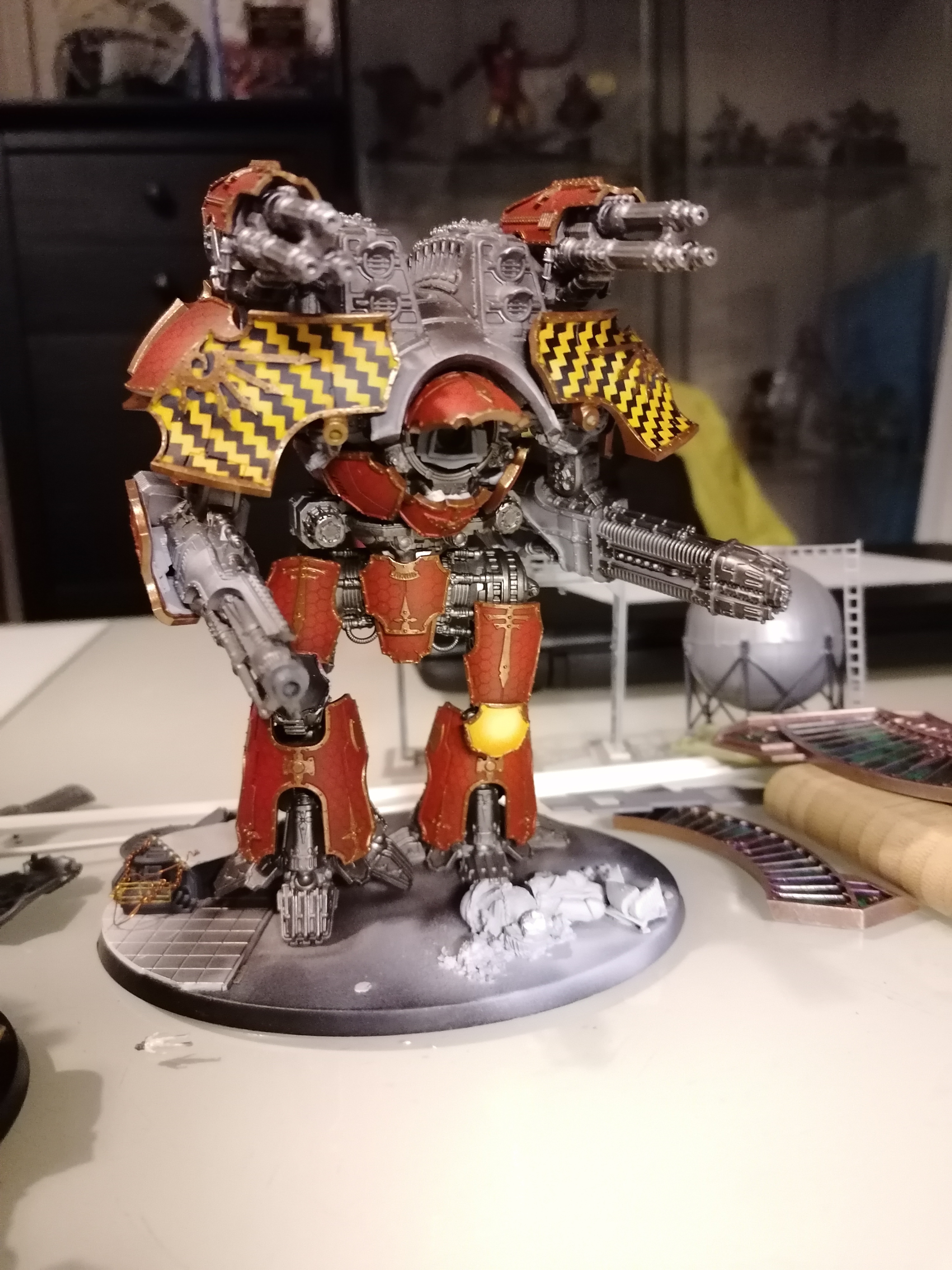 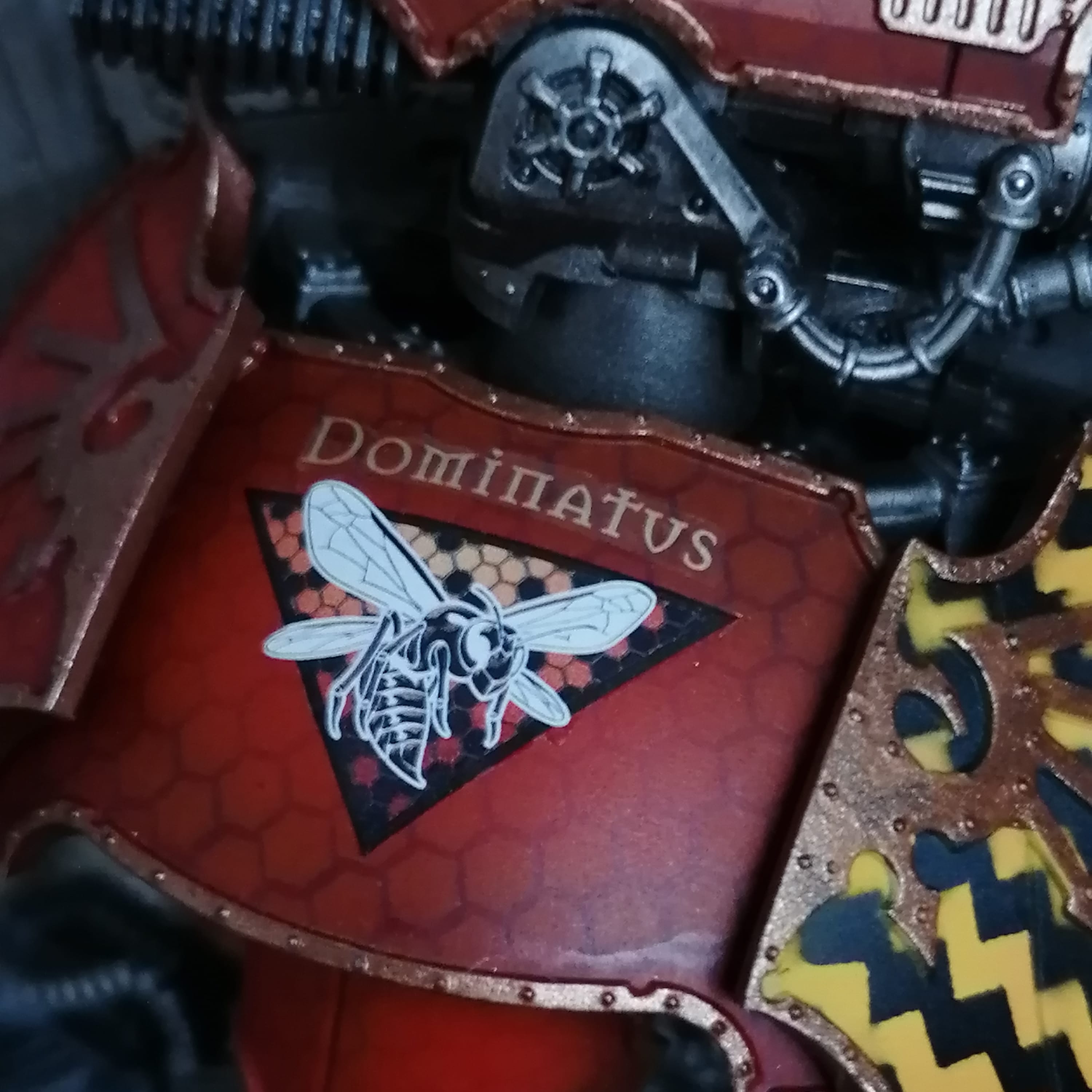 That is it for now, i will update again soon, and this time I promise I actually will

Not gonna lie, I've been waiting quite some time for you to update this. I almost lost hope.

they are epic brother!

Well damn, amazing work. The titans look brilliant, as does the reconstructed decal.

That carapace is still so awesome.

Amazing effort on the home-made decals - that's a lot of work!

The Reaver is excellent!

Well these are on another level!

Any chance of you sharing the Ignatum logo vectors? I'm doing a 28mm Ignatum warhound and FW never made decals 😭

My Red Scorpions project log and the glorious nipplewing!  Now with added Primaris.

I don't care about what GW has in mind in further releases regarding Legio Ignatum. THIS is the official heraldry and art for the Fire Wasps on my mind from now on. My congratulations for hiving such a distinct and idiosyncratic colour scheme for this legendary legion. There are a lot of Loyalist legions baed on red (Ignatum, Invicta, Honorum, Metallica), but you really have set Ignatum appart from the rest. Amazing job.

Where are the little photo-etched railings from?

Fantastic stuff, truly amazing work. I also really like what you've done with the metal work to make the body more interesting.

Thank you all for your replies, I am really glad yo all like my work!

So a lot have happened since the last update, and here is a taste of it:

First off I started designing banners, and have testprinted some of them on decal paper already: 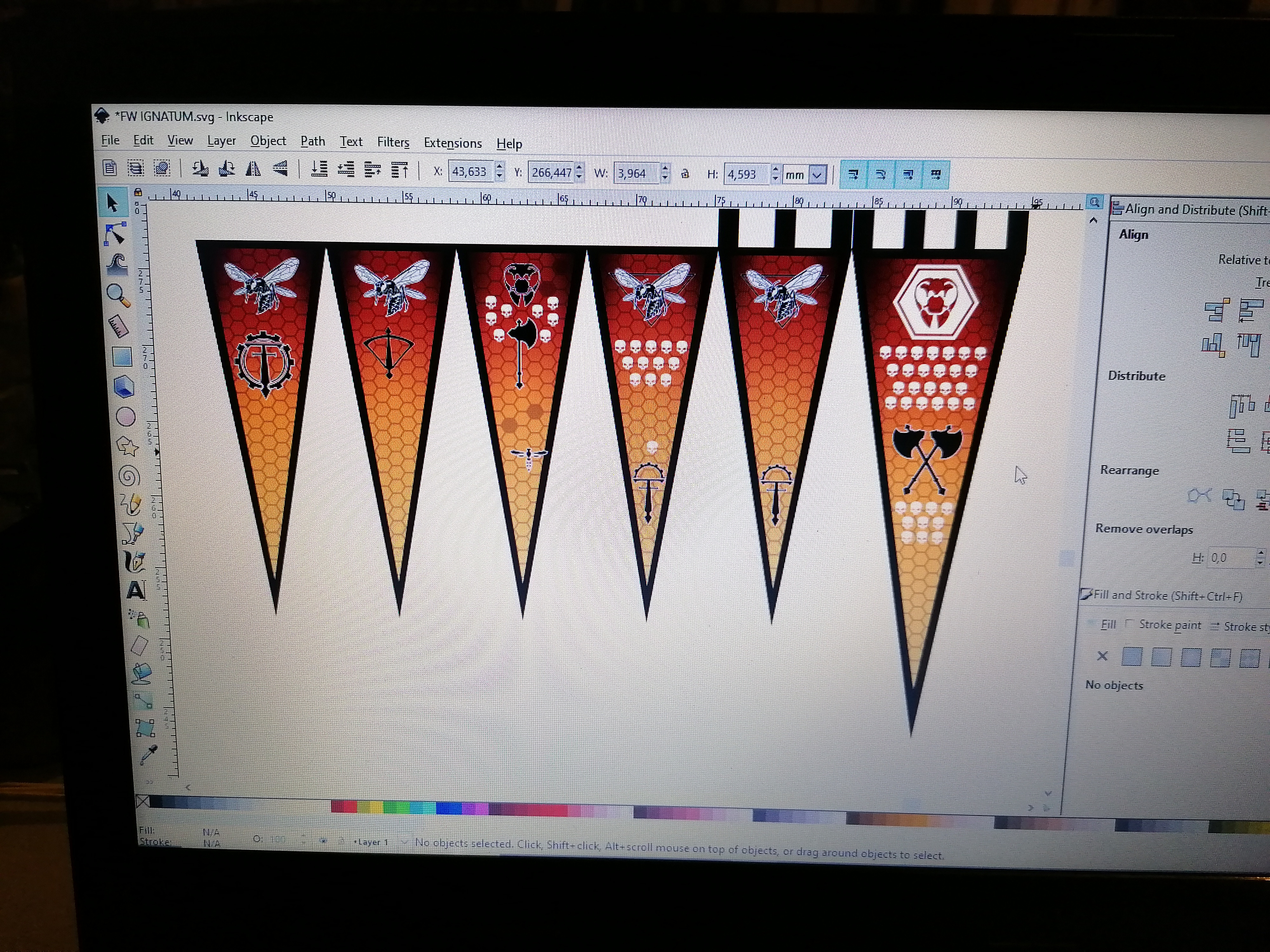 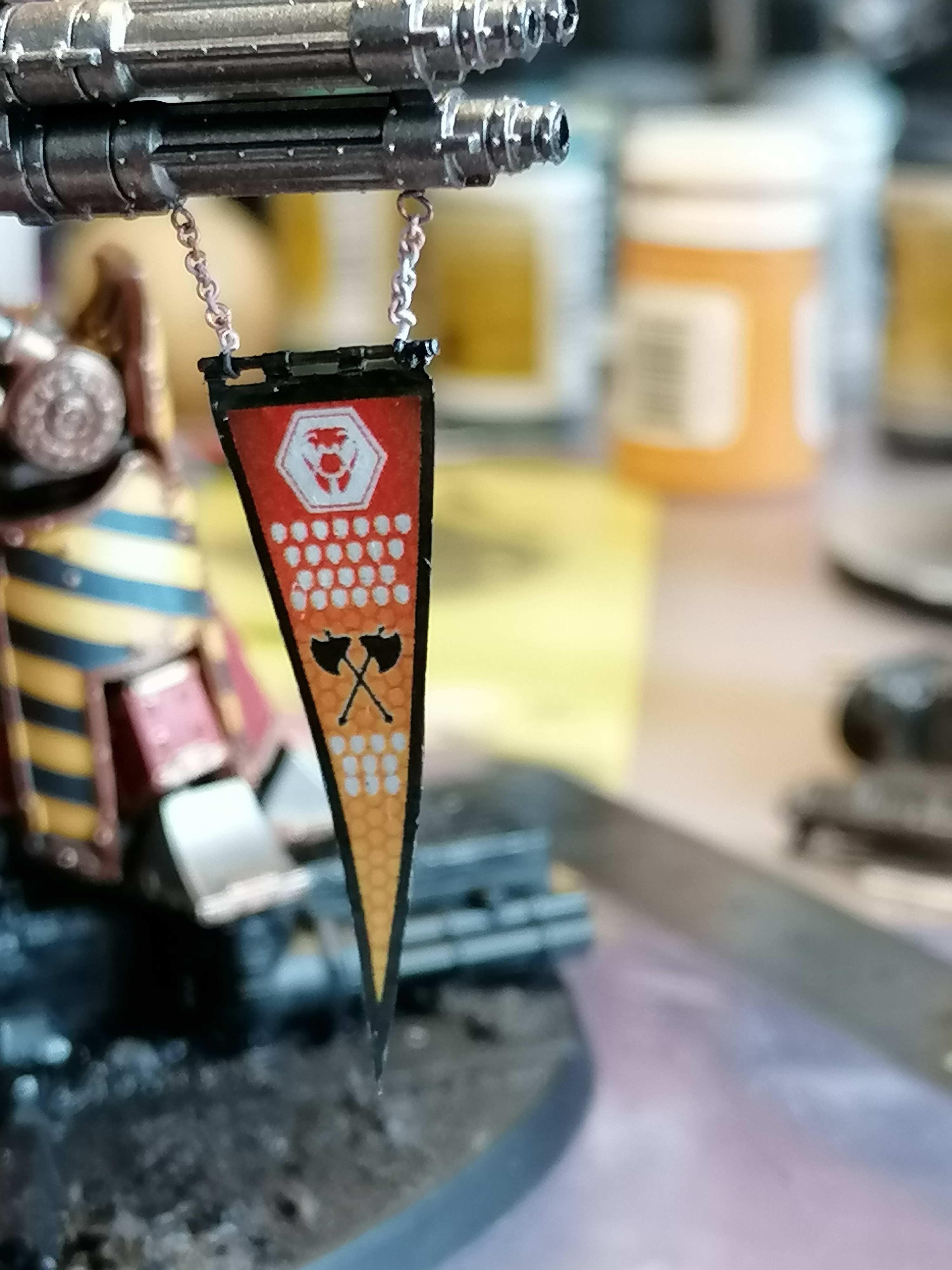 Also working on decals for 28mm versions, mostly for fun atm as I don't have any engines that scale. 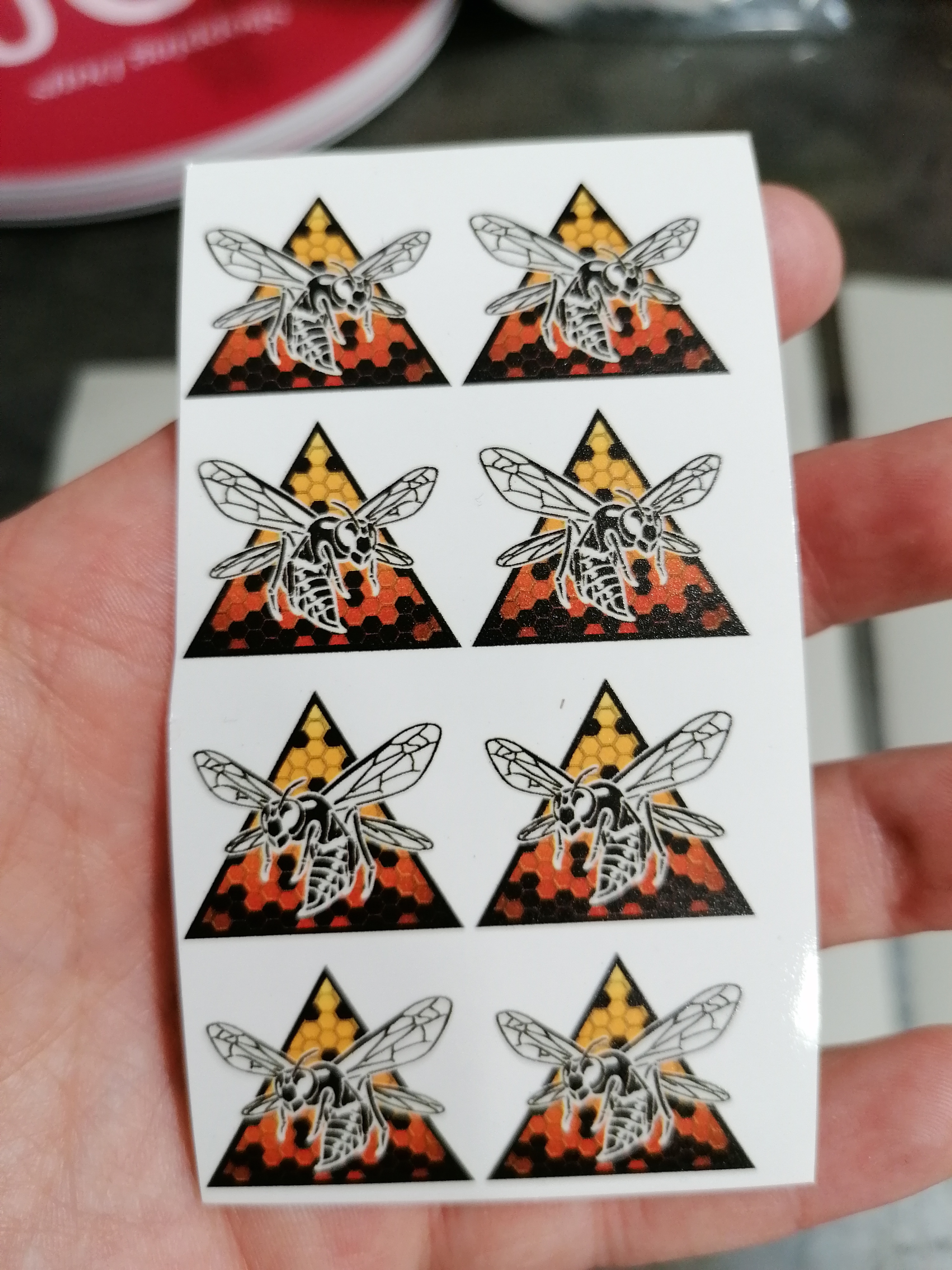 The decal paper is a bit weird and I have ordered some from a new supplier. as soon as it arrives I will do more testprints.

I also did some stencils for hexagon stripes matching the ones on the ignatum decal sheet, as they look awesome. If anyone is interested in some just PM me. 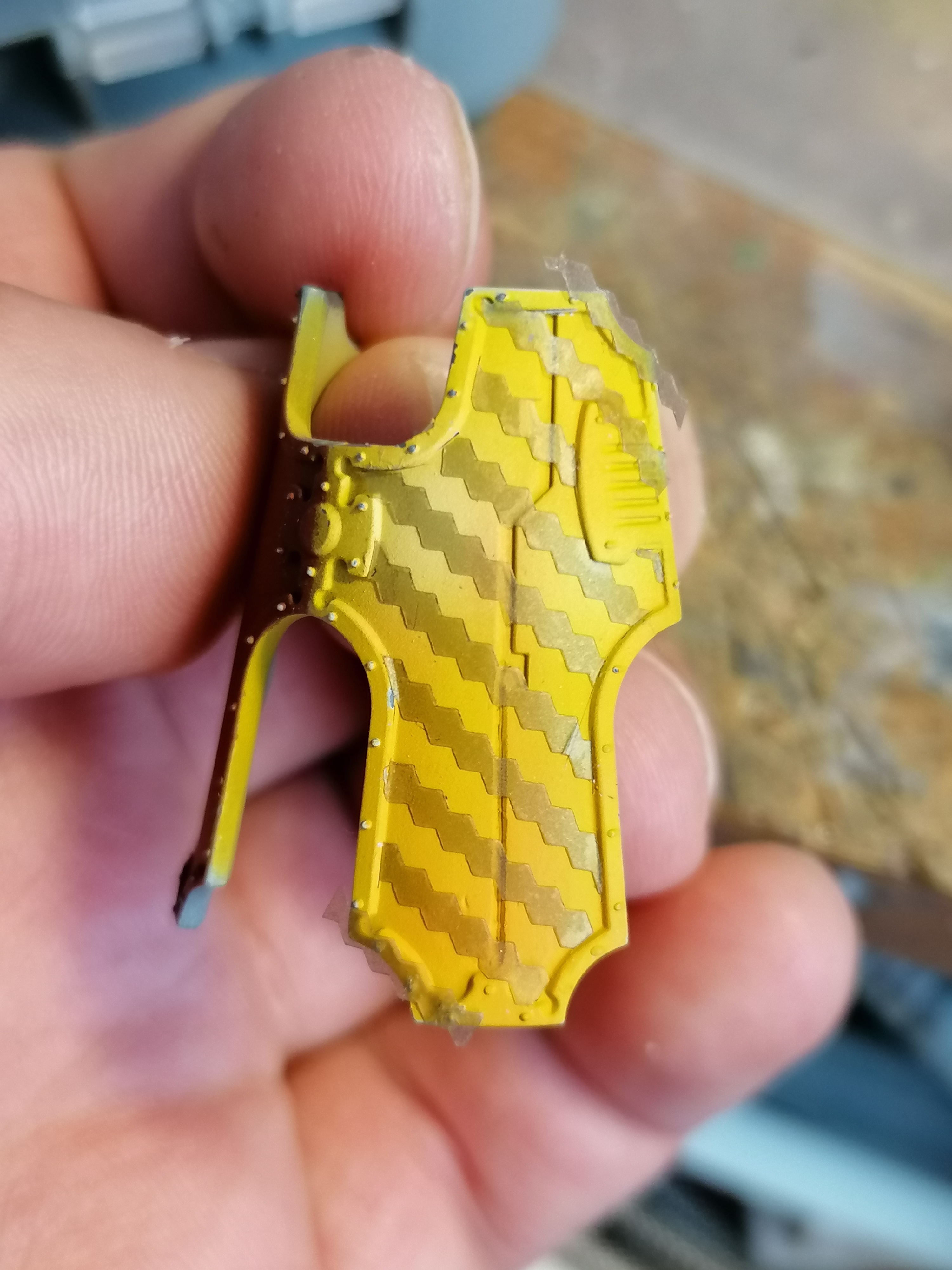 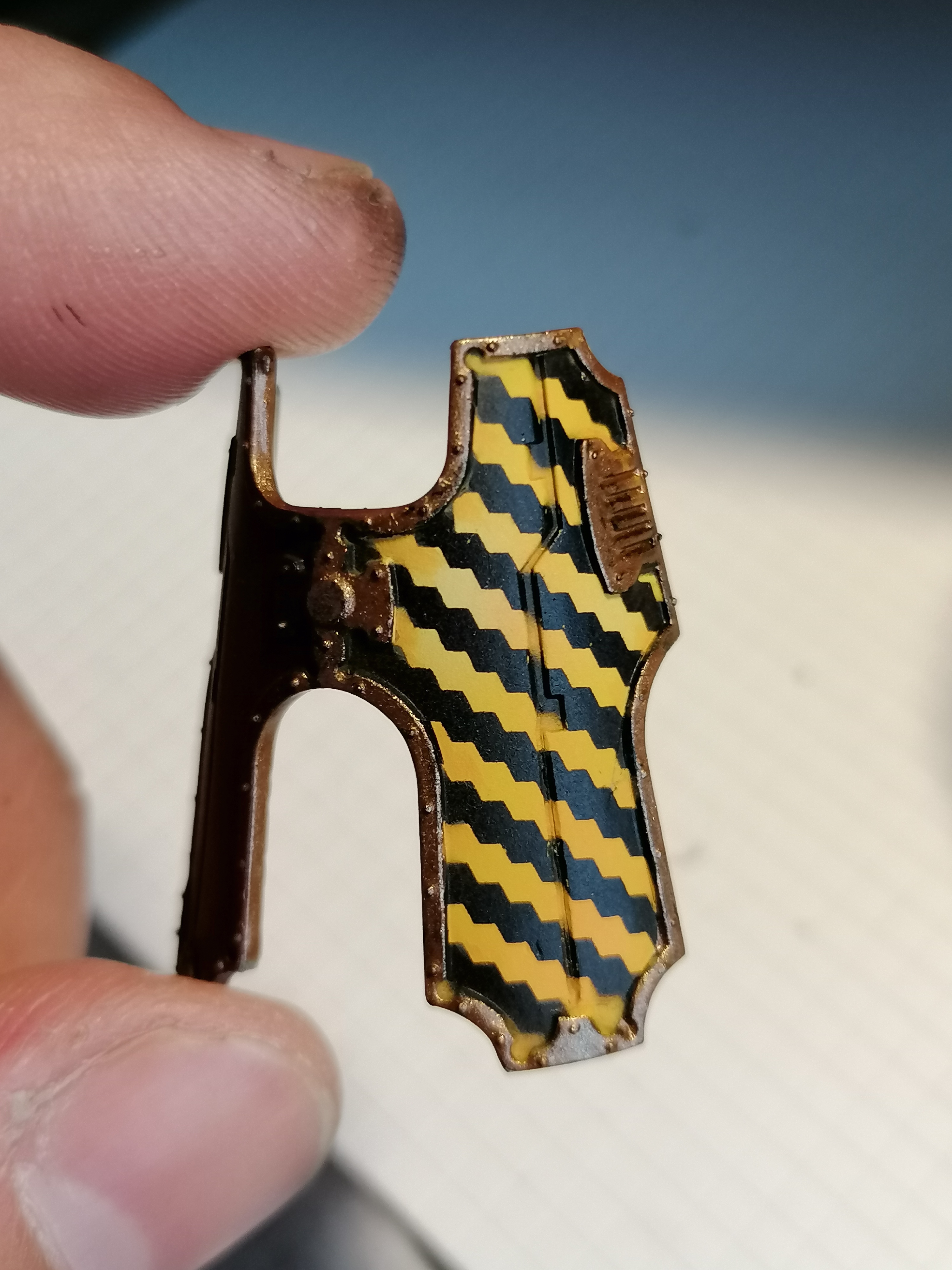 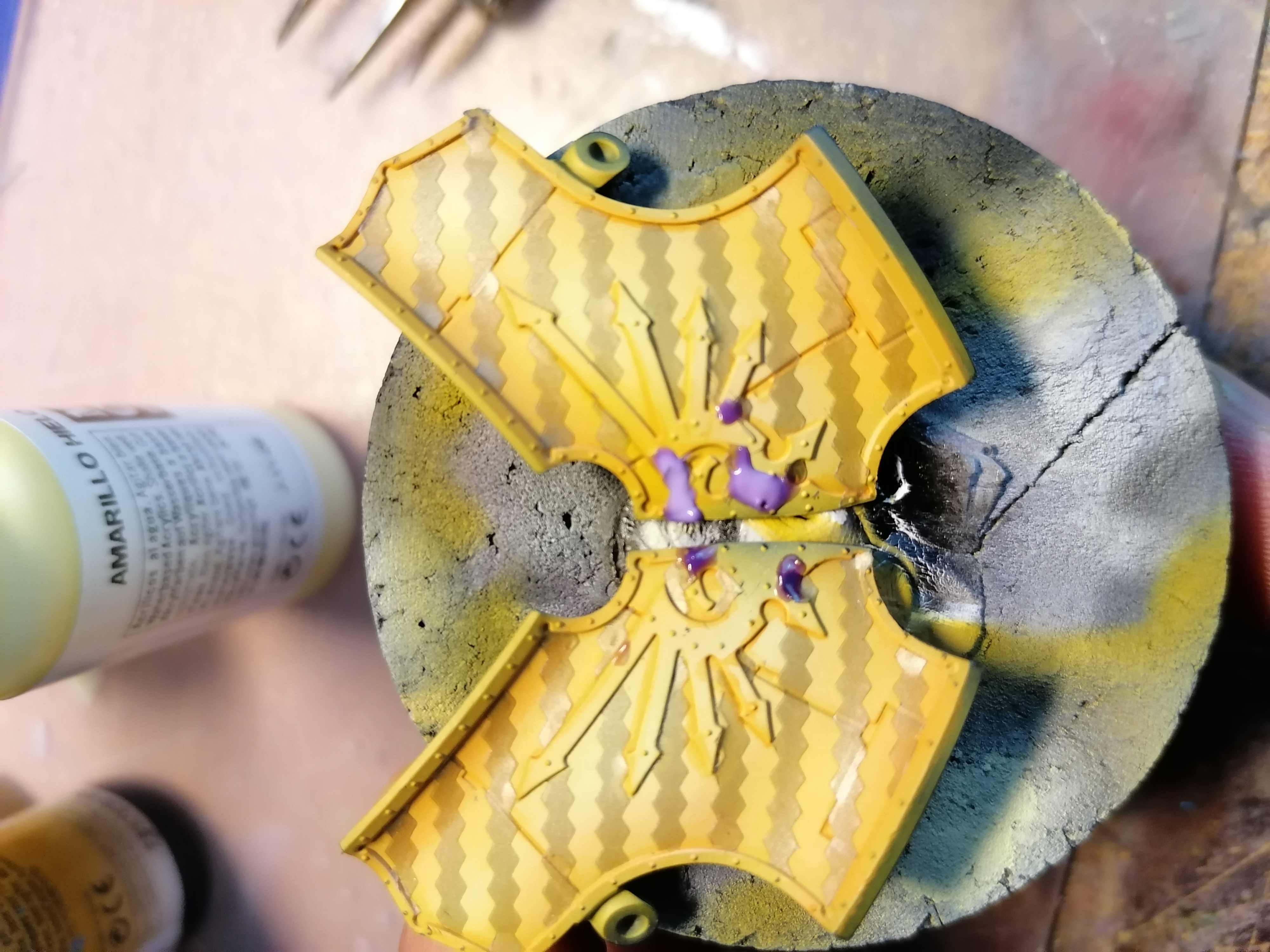 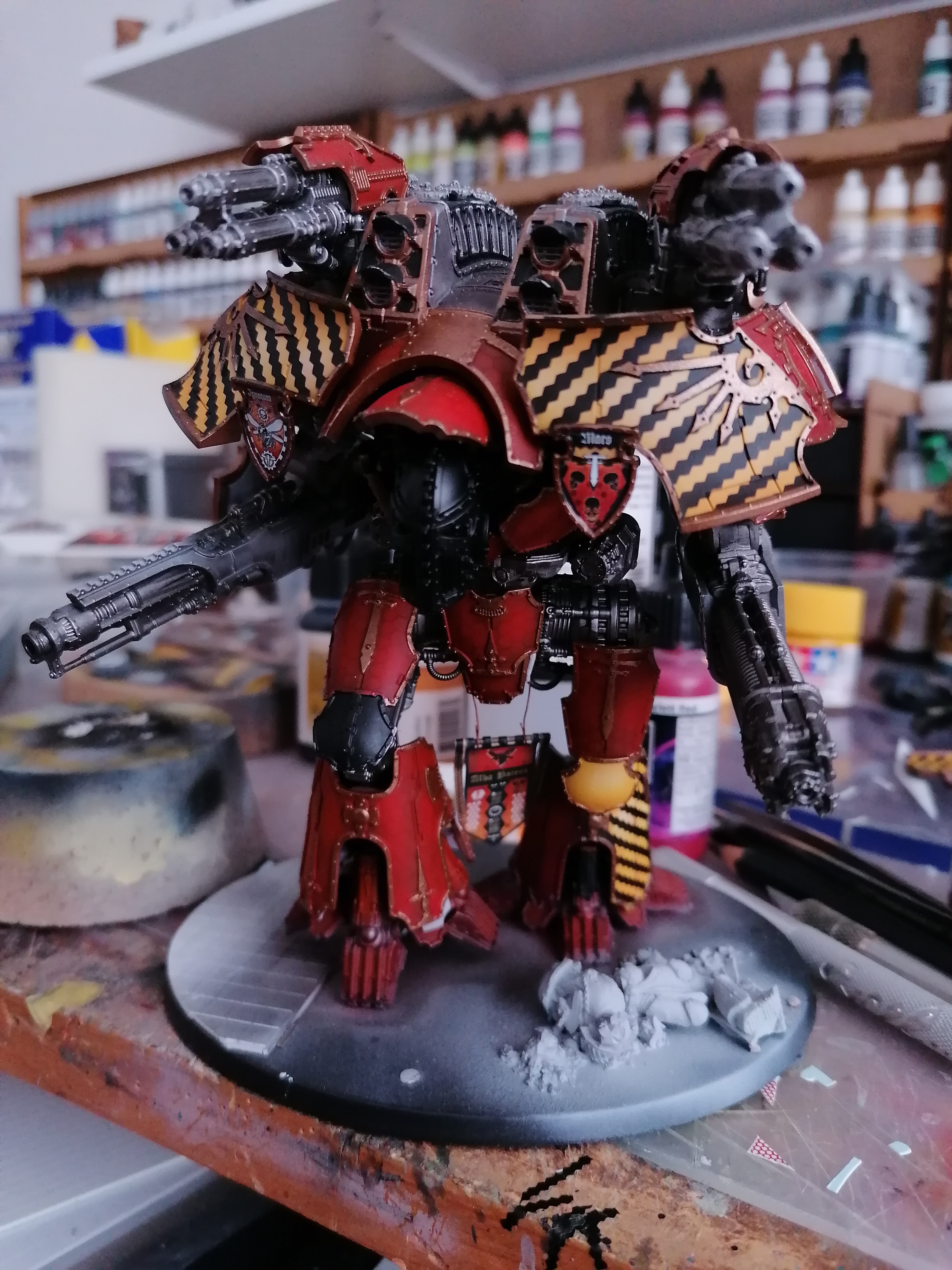 I also bought a Warbringer and did some crew for it: 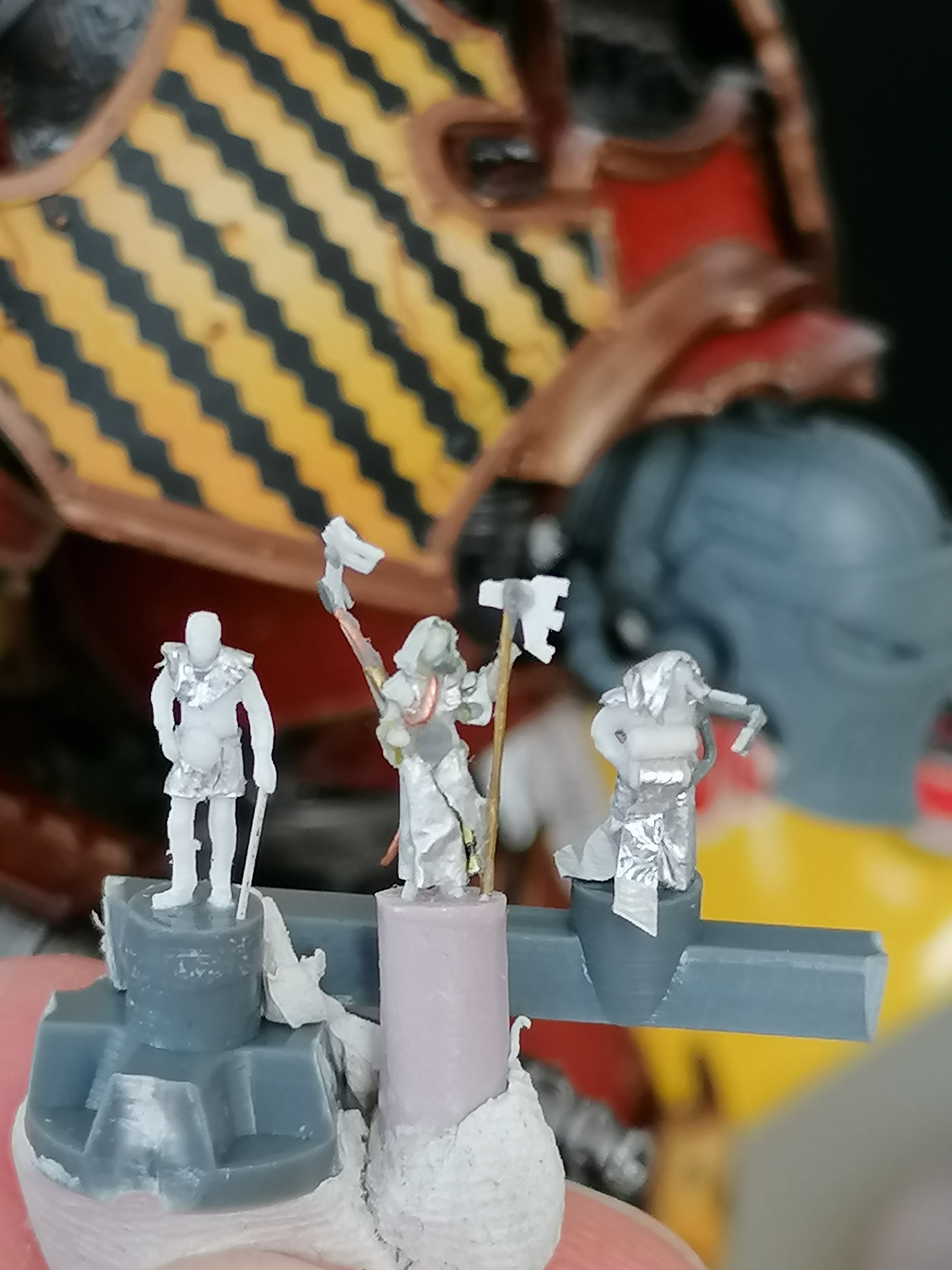 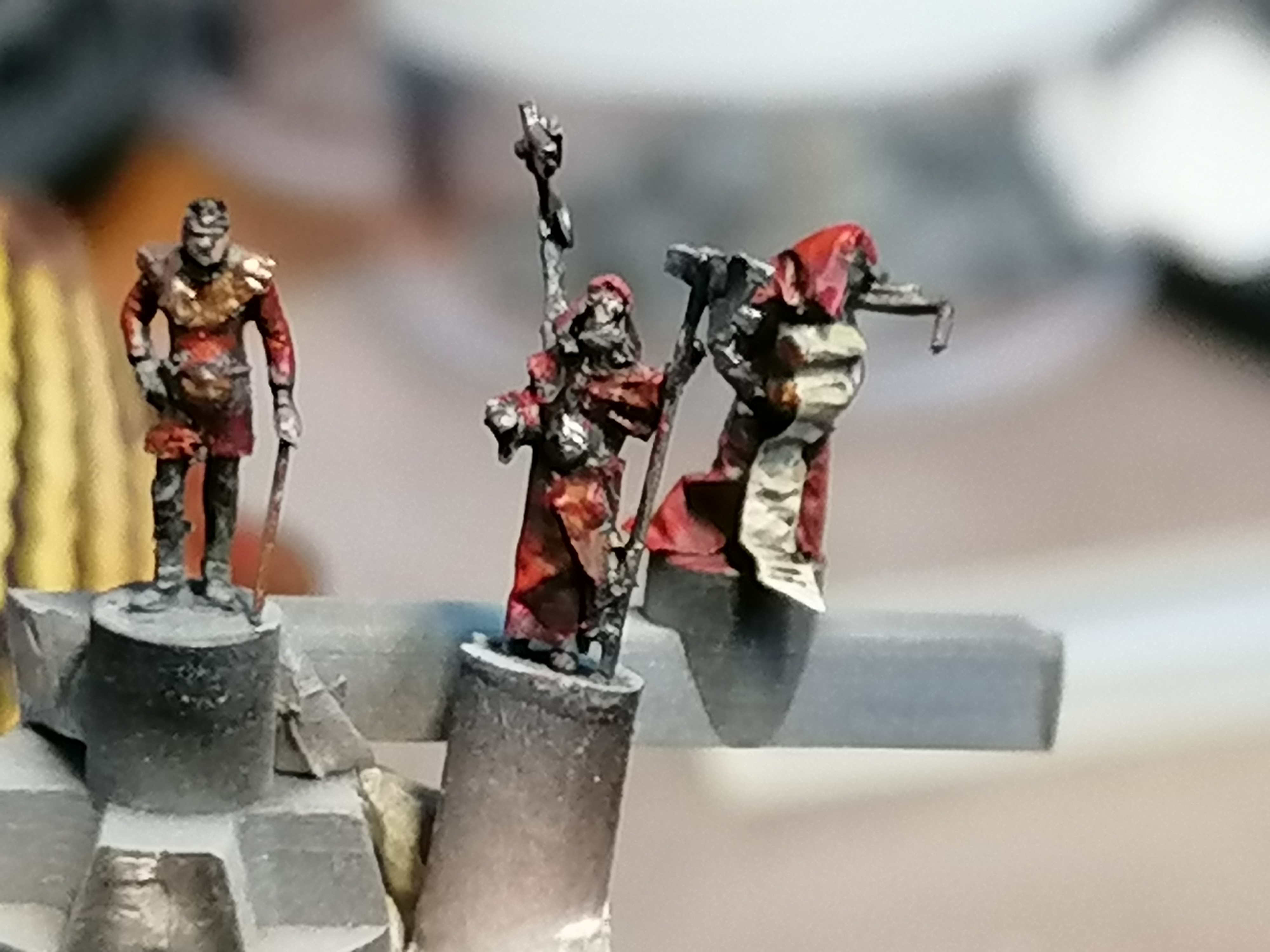 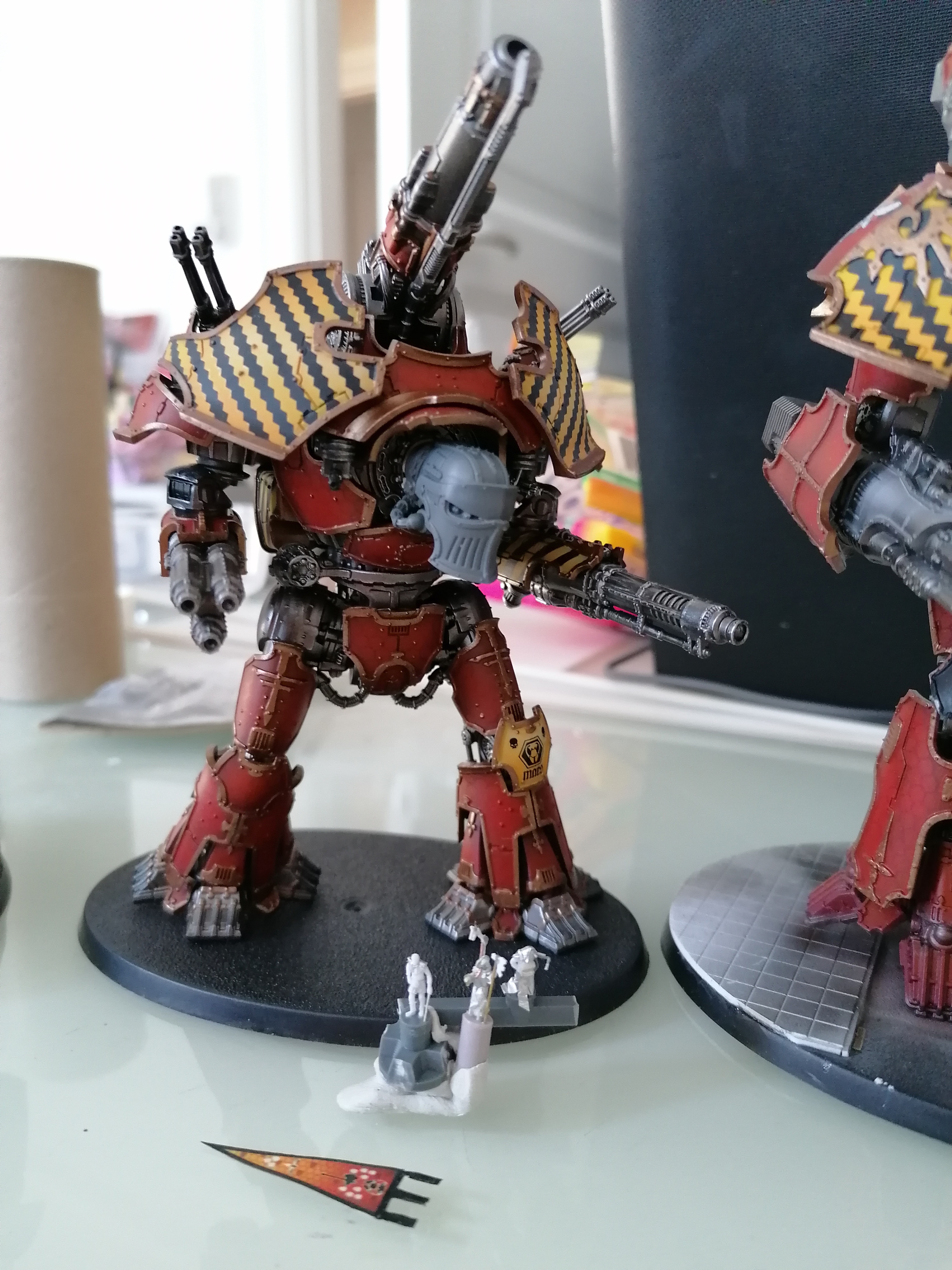 But that is not all, something even cooler happened!! I had my first game, and man I am hooked! I am not particularly good, but I am having fun and are currently 4 games in. 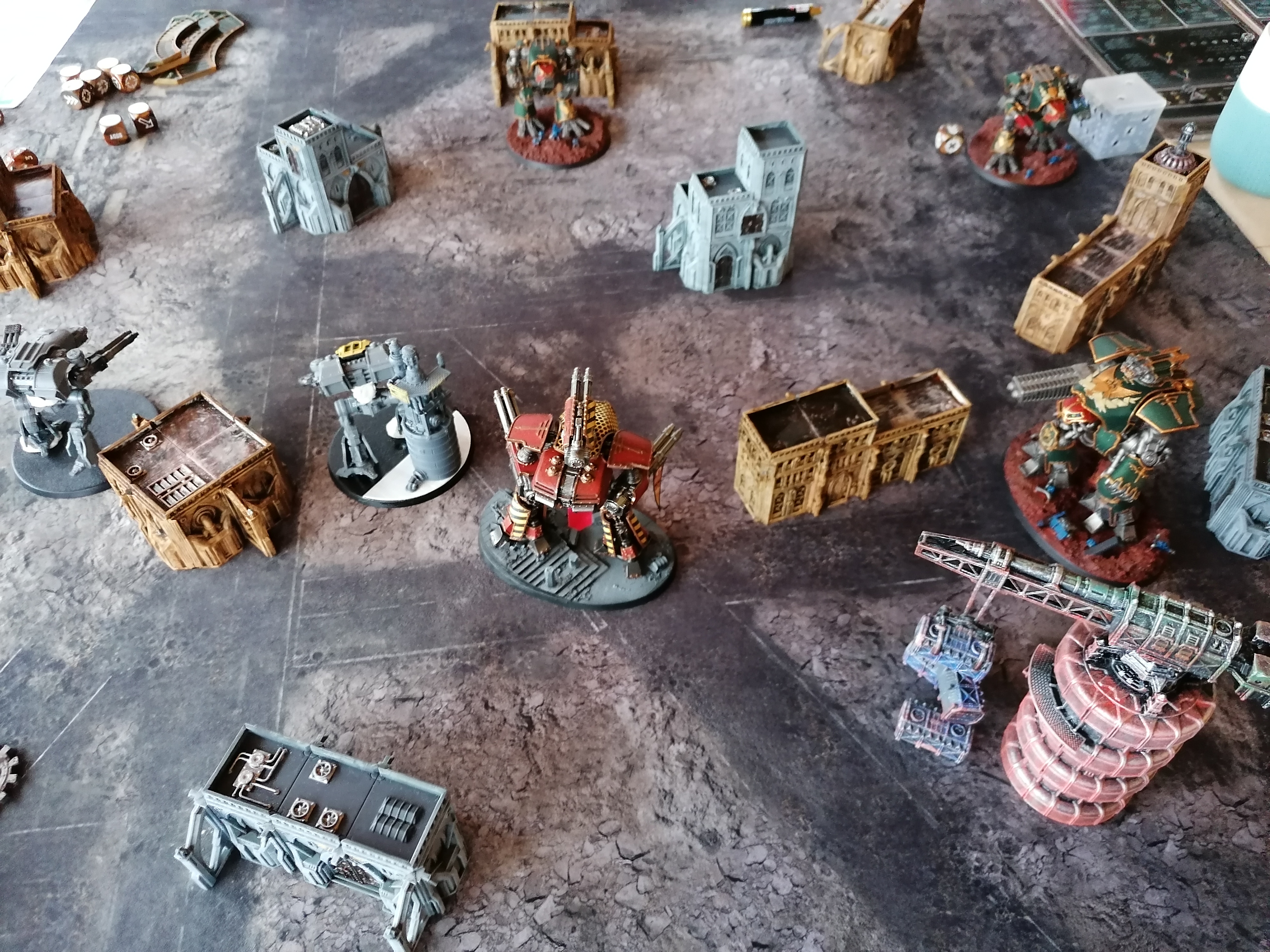 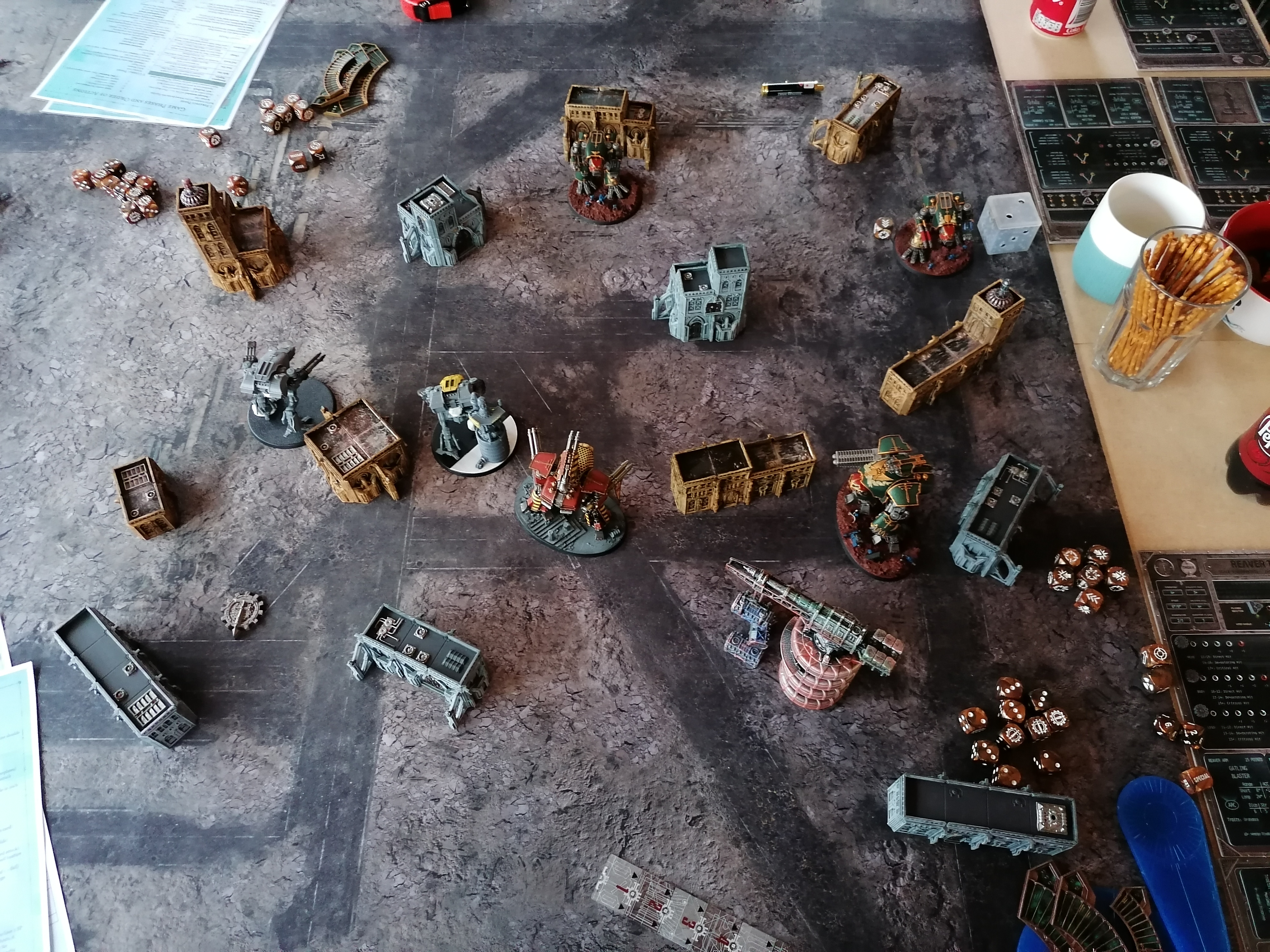 One like is not enough for all this fantastic progress.
Thanks for sharing

That crew is amazing.

Did you 3D print some bodies and then equip them with foil, brass, and putty?

Very cool stuff. Probably the best use of stencils that I've seen.

I don't know if this will be helpful but the Tau stuff for AI has some hexagonal transfers. It's not in huge amounts and it's a lot of individual hexes rather than a hex grid. They come in black and white.

Awesome work. Those titans are amazing.

Your stencils made me do somd research onto whether I can mod my 3d printer into a cutter. Just don't know if I can be bothered putting thd effort into it yet lol.

Thanks a lot guys, I really need to update more often

That crew is amazing.

Did you 3D print some bodies and then equip them with foil, brass, and putty?

Thanks, and no 3Dprinter was involved, they are basedon 1/200 scale figures of civilians used by architects.

Very cool stuff. Probably the best use of stencils that I've seen.

I don't know if this will be helpful but the Tau stuff for AI has some hexagonal transfers. It's not in huge amounts and it's a lot of individual hexes rather than a hex grid. They come in black and white.

Thanks! I just gave thedecals a look, and they are pretty cool

Awesome work. Those titans are amazing.

Your stencils made me do somd research onto whether I can mod my 3d printer into a cutter. Just don't know if I can be bothered putting thd effort into it yet lol.

Do yourself a favour and look into a desktop plotter, they are really great and not that expensive anymore