I really love the game Inquisitor and the Inq28 community that has developed around it.  For a long time, I've wanted to convert up a large number of mutants in the style, partially to use as mooks and partially just to do it.  This is one of my first big conversion projects: I plan on converting every single model to be a unique or semi-unique mutants (there will be a squad of beastmen in the final project).  In here, there are a mix of Genestealer Cult, Gor, Cawdor, Escher, Goliath, Orlock, Ghoul, Daemonette and Poxwalker parts combined with a bunch of random bits.  In game terms, I plan on using Genestealer Cult rules for them since it seems to represent a rebellion so well, and the idea of a group of mutants emerging from the shadows to strike at Imperial hypocrisy looks perfect.

I'll be expanding on the fluff later, but right now I imagine a planet that is largely agricultural in the southern hemisphere and heavily industrial in the north.  Mutants, as on many Imperial worlds, live either segregated in ghettoes where they toil as slaves within the manufactora or scattered and lost in the vast expanses of industrial wasteland or the hidden corners of the fields of the south.  In the vast mountain ranges, hidden in valleys and caves, a rebel group of mutants strikes against the local PDF in an attempt to throw off the shackles of Imperial rule.

So, here's the first wave of the Mutant Liberation Front.

A group of the Mutant Vanguard 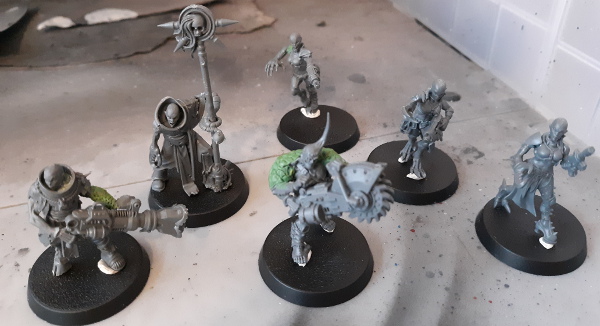 A squad of Mutant Scum with Autoguns and a Missile Launcher 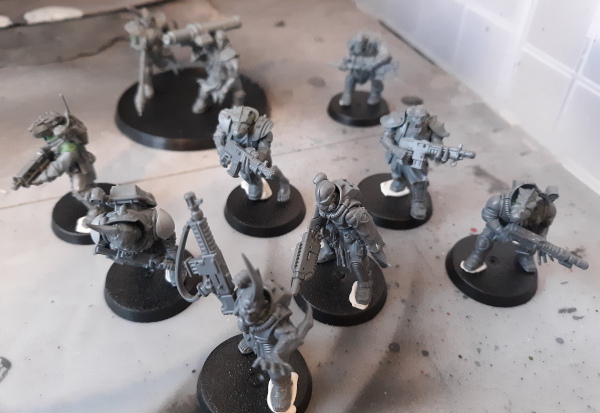 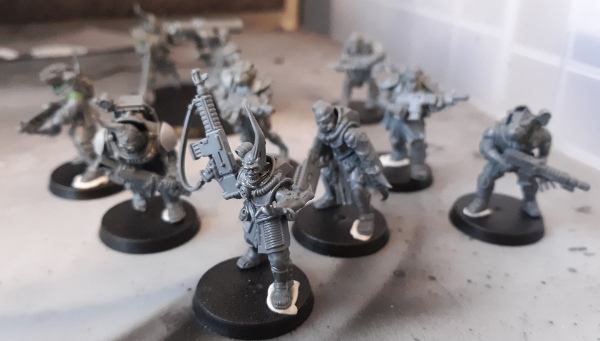 A squad of Mutant Scum with shotguns, flamers, and a heavy stubber 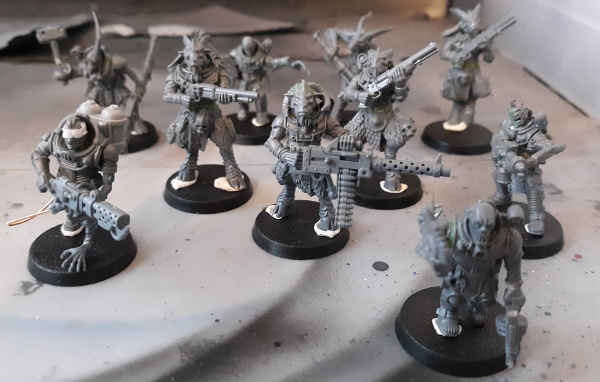 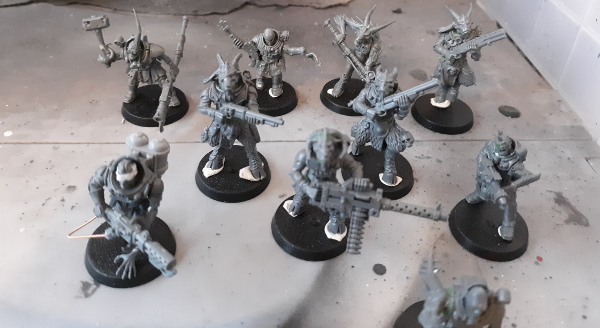 A squad of big ol' mutants 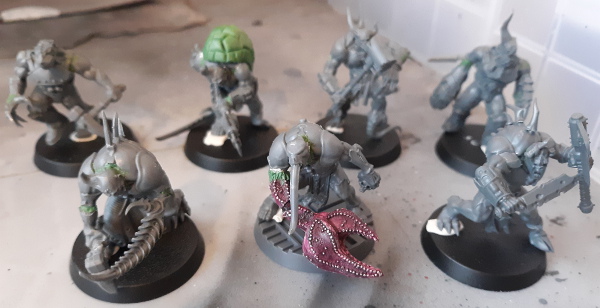 And a beastman sergeant waiting for a squad of backup 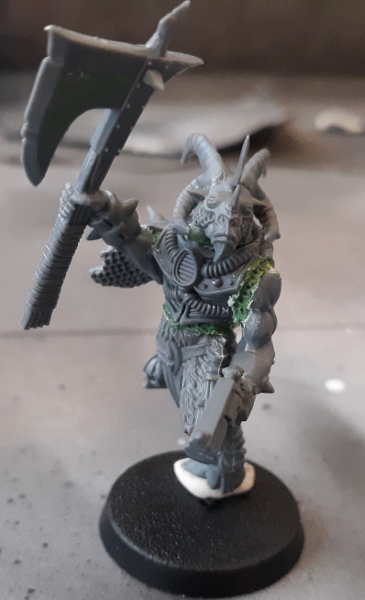 Those are some very cool conversions, and a great start towards your mutant uprising

The battlefields of the 41st millennium can always use more misshapen freaks! Good work; I am looking forward to seeing these muties get paint...

Superb conversions! I especially like the beastman with heavy stubber. He looks like he has a derisive sneer on his face.

Nice assortment of mutants, lots of good kit bashing here - ditto looking forward to the paint on them.

Gorgeous models. I love mutants! The kitbashing is awesome.

Thanks for all the kind words, folks!  My mutants aren't on up for painting right now, I have a few things that I need to get done for Adepticon before I start on this project.  That said, because I enjoy assembling/converting models more than painting, I have been putting together a few more mutants. 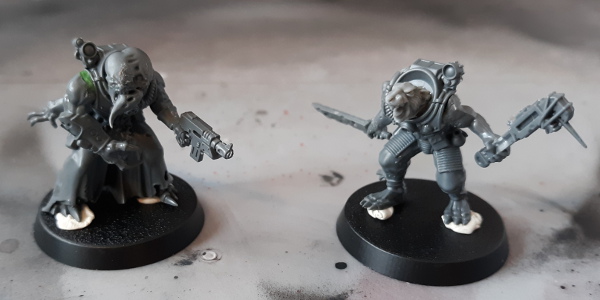 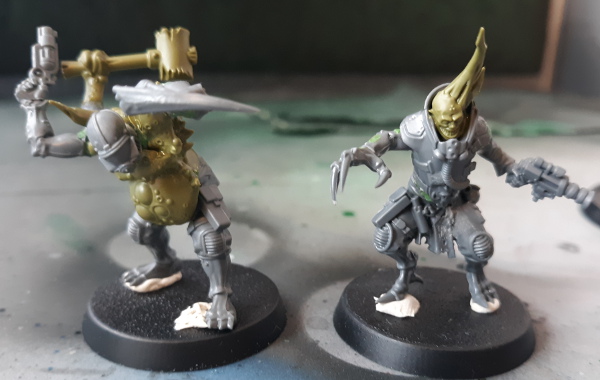 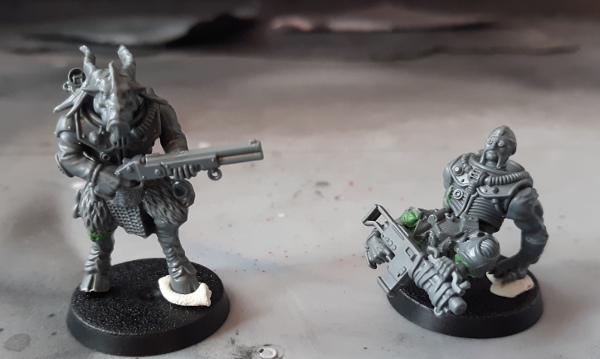 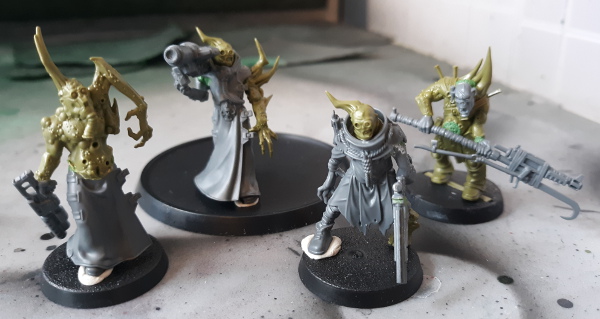 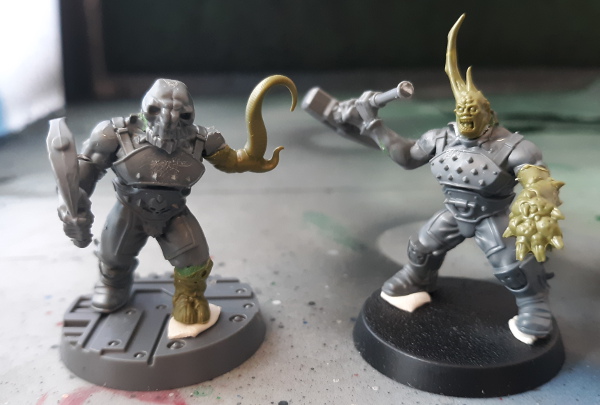 And a Mutant Sniper, born with no feet and only one hand (that hand being at the end of his tail) 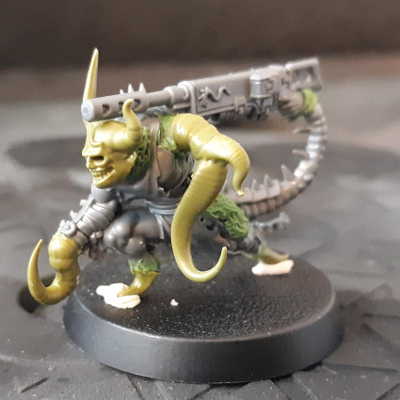 These are miliput copied mutations right? How did you manage to copy them so smoothly? I might be mistaken, but they look really bright to me and not this greenish colour they normally have.

The green mutations are just from green poxwalkers. The easy to build ones and some of the regular ones are on green sprues and that's the color they have (maybe the lighting is weird to make them seem off to you). I wish I could sculpt that smoothly.

Guess I was wrong

Makes them even more expensive to build that way. My favourite is the guy with the sniper rifle. Very unique way of shooting it and really standing out.

Is the mutant who is sitting down a casualty or a "handi-capable" mutant who cannot walk? Either way he is brilliant. I'll have to try a similar conversion with one of my R&H troopers.

Neither!  He's a mutant with legs for arms and hands for feet, so he can "walk," just with his arms.  This angle might make things a bit clearer: 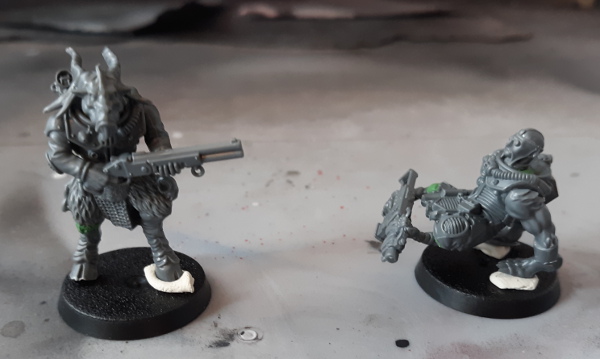 Adepticon put a serious dent in my ability to work on this project as I finished up a few other things I had going on.  Now that I have about a thousand points done, I'll probably start painting.  Nevertheless, I've made some more mutants, I finished my squad of beastmen with shotguns, grenade launchers, and heavy stubbers as well as a few heavy weapons for other squads.  In addition, I've made a few characters, stand-ins for a primus, an abominant, and a magus. 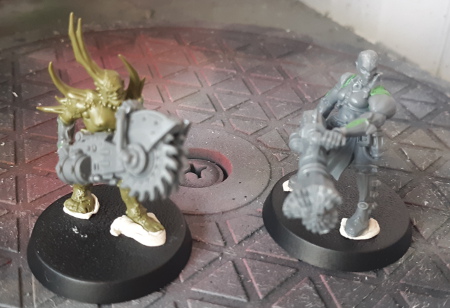 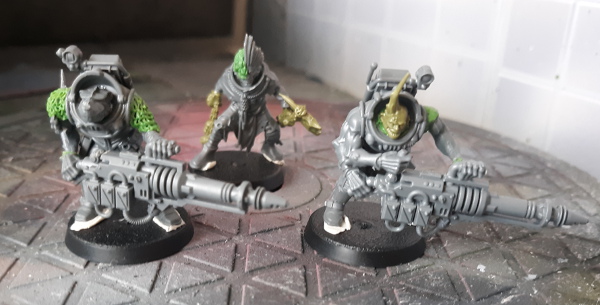 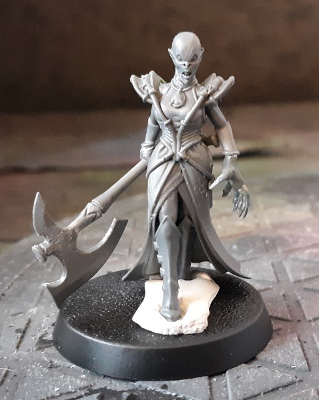 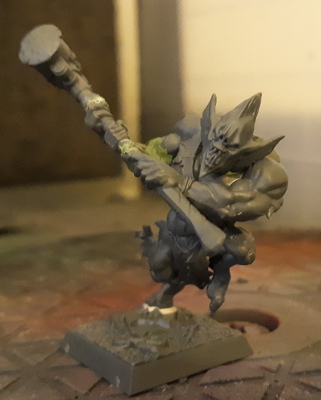 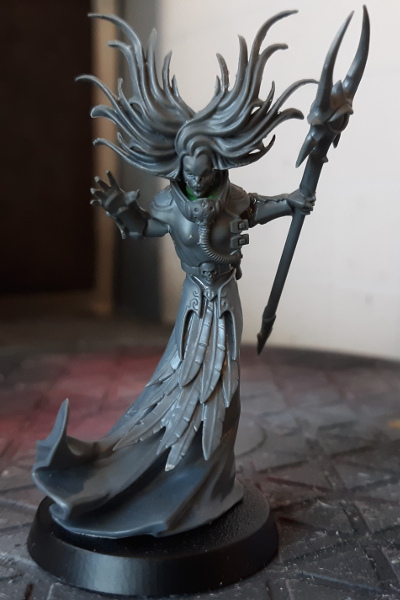 Summer put another huge dent in m progress on all these mutants, as did a few other projects.  But, here is the first finished squad, a squad of Beastmen with shotguns, stubbers, and grenade launchers. 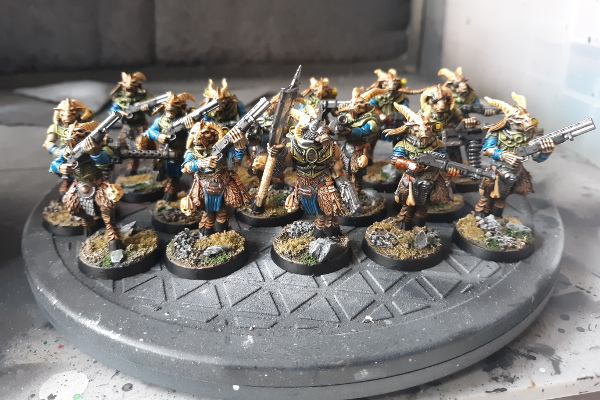 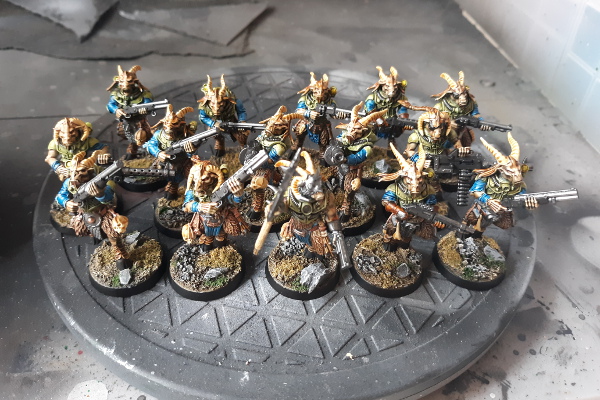 You've done a wonderful job with your mutants. I especially like how you have painted the fur. Congrats!

Yeah, they look great - the blue makes for a really nice spot colour.

Thanks you all. I'm currently working on another unit of non-beastmen mutants. Hopefully I can have them done in a somewhat timely fashion.

Looking seriously good I must say

I need to start posting my R&H soon

I've finished up a ten mutant squad.  There's a dude missing a head because I decided to switch up some things, but he'll get one eventually.  I'll also end up moving the Orlock bodied dudes into a separate unit later, but for now, it works well enough.  So, more mutants! 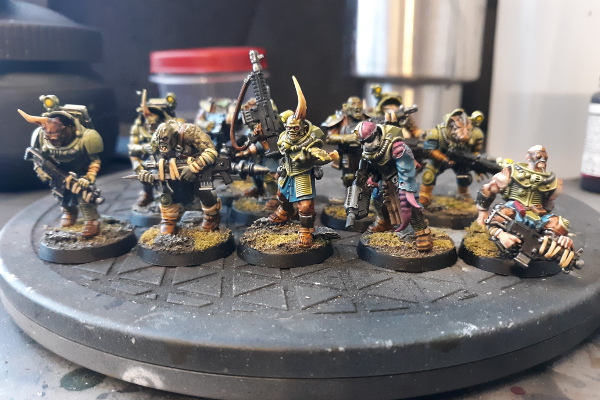 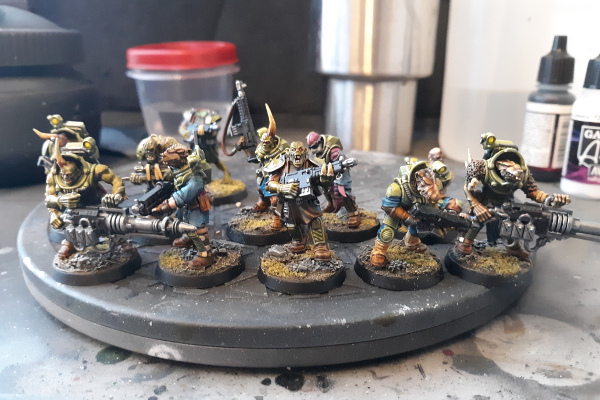 I've finished a few more mutants, another squad of ten with assorted weapons and a couple flamers.  Again, the Orlock based autogun guy will probably leave this squad for another, but for now he's in here.  There are also a couple of missile launchers, initially for a heavy weapons squad or whatever. 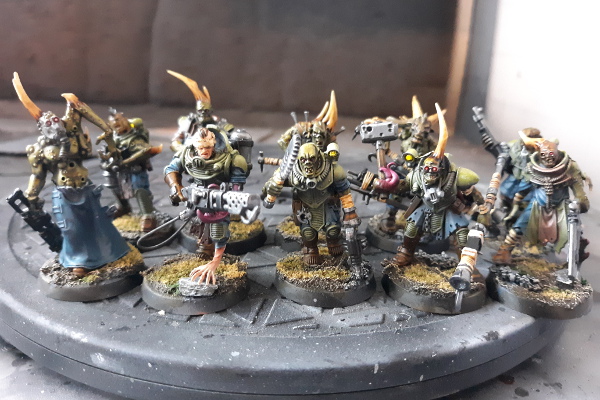 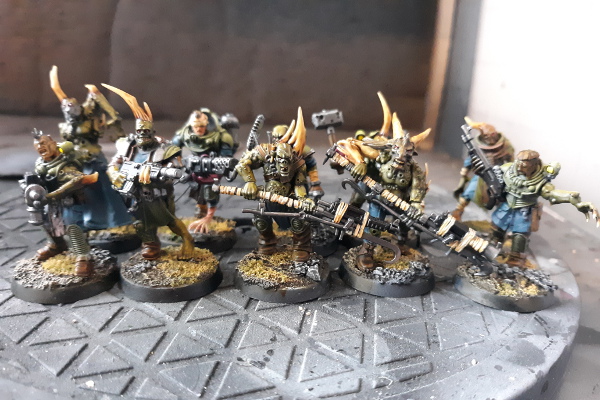 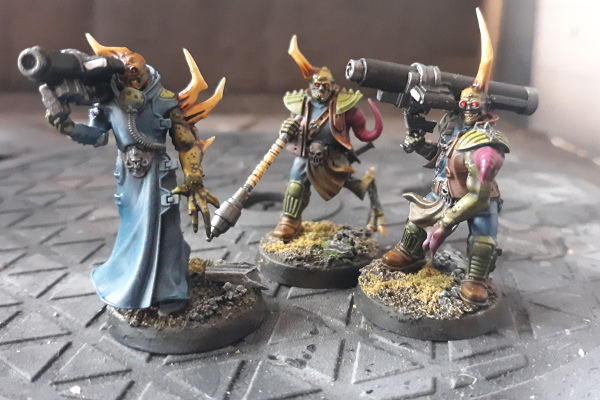 Excellent conversions and painting, I really dig the sniper conversion!