318 replies to this topic

Sevatar is still in space prison on the lions flagship. It's a stretch at this point him escaping and making it to terra and somehow getting a chin wag with malcador or someone similar or someone in a position to put him with/in the grey knights.

Hopefully he will be executed

Hopefully he will be executed

Genuinely wouldn't be surprised at this point.
Feel like the space wolf swan diving into the plasma reactor with a melta bomb at the end of abyss has been the best death so far

Have a butchers at this;

Just waiting for the first pic of the Dramatis Personae.

Just waiting for the first pic of the Dramatis Personae.

But I think it might be this that you're looking for:

Ahhh so Ison is a Blood Angel. Wonder why he hates them.

The nine names, well holy :cuss balls. It better reveal who they are though and not just leave us hanging forever! Quite a few living Knights Errant missing from there, Severian being the most prominent.

Interestingly, his name is spelt incorrectly - it is Durak Rask in the FW HH books. Kalgaro is also his replacement as the Siegemaster/Master of Ordinance and yet is not given the title here.

I’m still surprised to see the Knights Errant - Grey Knights plot line potentially ending here. I get the feeling it will continue into the Siege of Terra series, as there’s surely far too much to tell than for this novel as well as the main story of the Death Guard.

Epimetheus is still a big headache for me. From what we know of him, he’s surely one of the Dark Angels on Caliban or at least involved there. But there’s no way that can be tied into this novel, I don’t know how it can be tied in at all tbh.

Interestingly, his name is spelt incorrectly - it is Durak Rask in the FW HH books. Kalgaro is also his replacement as the Siegemaster/Master of Ordinance and yet is not given the title here.

And Epimetheus is spelled as Epithemius....

No direct answers to the nine them. Is the kneeling pic from epilogue perhaps? That way identities could intentionally still be kept in the dark..

Interestingly, we do *have* a Crius in the series already: An Iron Hand of the Crusader Host, who ends up a little... strange after The Keys of Hel. I wonder if there's any connection at all, or just coincidence / lack of oversight.

I think I'd gamble on Yotun being a former Space Wolf, going by the name only.

No direct answers to the nine them. Is the kneeling pic from epilogue perhaps? That way identities could intentionally still be kept in the dark..


Or maybe we will know some of them...

Khyron/Sevatar theory can be put to rest now it seems

Can we be really sure about that, though? I mean, I was never really fond of the theory myself, but when was the last time we've seen him, and his last known location? I believe he was last incarcerated on Macragge or somesuch?

While he hasn't been mentioned since, there is a bit of a gap in the narrative between the end of Angels of Caliban and Ruinstorm in particular. When we see the triumvirate of Imperium Secundus, they're already traversing the void, and warp, with their fleets all mustered. There is a case to be made that, with the muster, they might not have wanted to leave their prisoners on Guilliman's homeworld, for example, and took them with their fleets instead. They took Curze, after all.

If we want to go fully convoluted and contrived, it could be written in that Sanguinius took Sevatar with him aboard the Red Tear to meet the Sigillite, maybe even related to Sevatar's unstable, surpressed psychic powers. I wouldn't like it, seeing how blunt a solution it is, but it would get Sev to Terra, into contact with Malcador, and there's a reasonable amount of time between Sanguinius' arrival, his departure for Beta-Garmon, his return, and the intervening councils that even involved Russ before he left for Trisolian, before the Sons of Horus make for Beta-Garmon in force.

That might also add to the whole belief that "Sevatar died on Terra" - which he in a sense would have, if he ends up as Khyron after reaching the Throneworld and meeting up with Malcador - while the Night Lords might well believe further that he was executed rather than dying heroically during the Siege.

I'm fully aware I'm perpetuating a fan theory here, but I can't just flat out dismiss it just because we haven't been told a necessary bit of story, not before the book is out, or another appearance of Sevatar set after it, which denies it clearly. Right now, there's narrative wiggle room, and with his psychic stuff going on, he may actually make for a pretty nifty grand master if they end up writing him up as one.

i feel the same...not fond of the theory but also seen nothing to completely disqualify it

Wasn't that confirmed in the story The Last Son of Prospero? I haven't read it yet don't have the anthology book with it but I thought I read somewhere that he ended up becoming Janus.

The flesh is weak but Twinkies are forever...
Burn the Heretic, the witch, the mutant in the name of oooo cake!

Kriegsmacht, I can confirm that you are completely right.

Warhammer Community posted up an article about the cast now, too. Here's their Dramatis Personae: 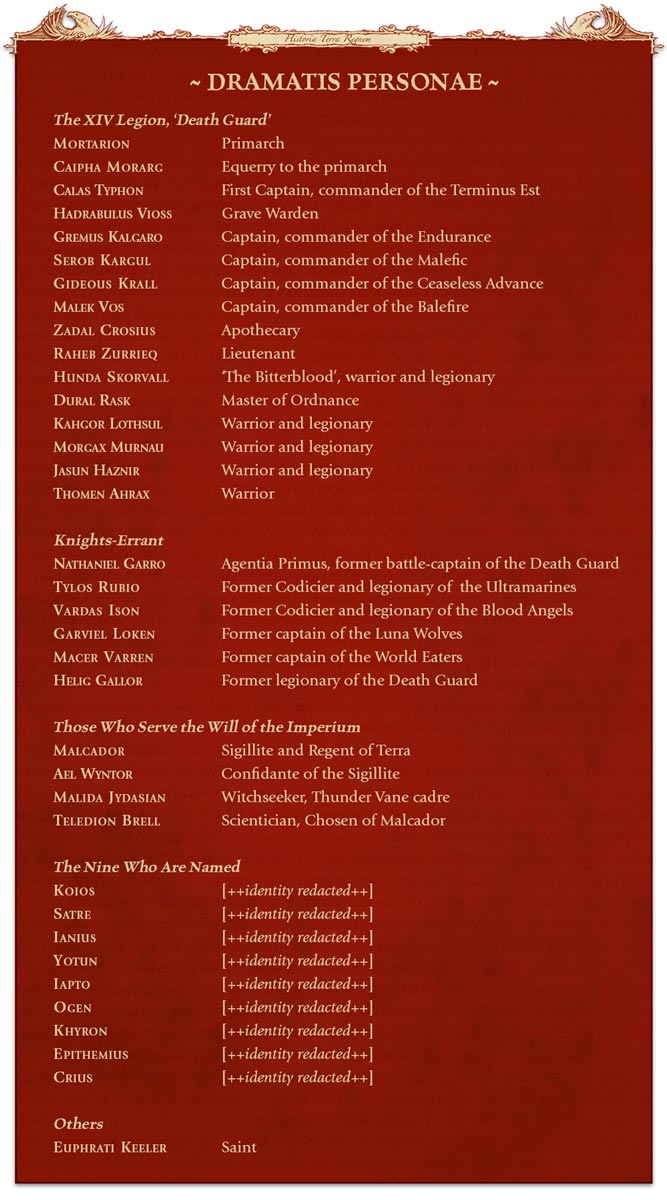 Regretfully, it just looks like Swallow has found a list of existing Death Guard names and has then decided himself what their positions should be, without thinking to check existing information.