Those are glorious. If new Berzerker models come out and they're only half as good as the Blood Warriors kit, I'll still be happy.

Thanks! The champ on the far left and the Icon-bearer are a bit janky pose-wise, as they were done before I realized to leave the Blood Warriors' knees ON the legs when adding the Mark III legs to the mini, but they still look good.

Gederas ... they look great, any chance of a tutorial or a close up of the way you have got the mkIII legs to fit the AOS models as i am going to be attempting this soon

I was inspired by several people, such as betrayer41 and Krautscientist's conversions. This is how I make Age of Sigmar Khorne Bloodbound/Blades of Khorne Blood Warriors into the swole Berzerkers I'm going to be running.

This is what you need to start with:

Start off by sawing the leather boots from the Blood Warrior's shins. The kneepads on the armour actually give a good guide for this: 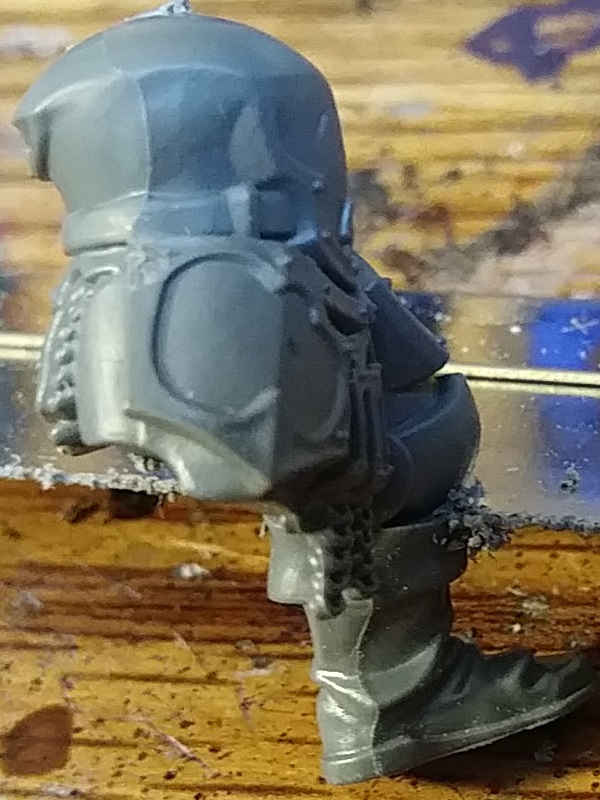 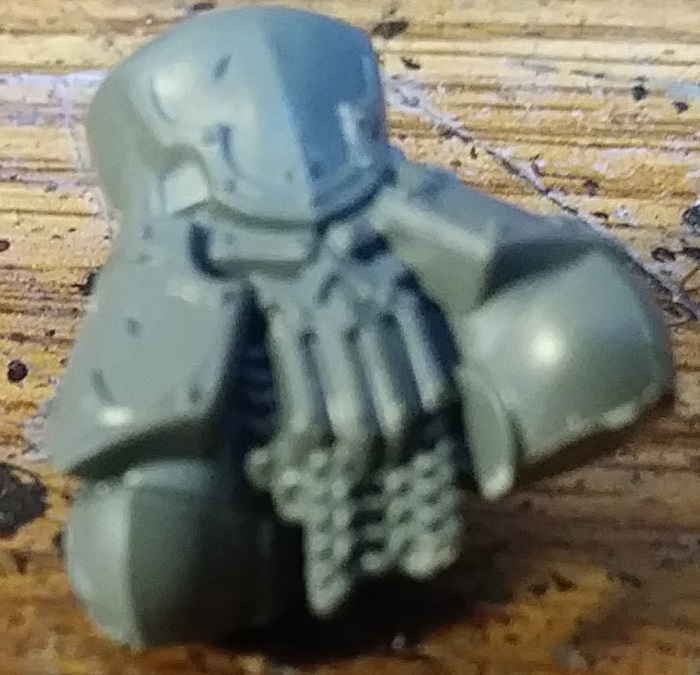 Next, start cutting the Mark III leg. I usually start from the back, and go through the knee that way. Thankfully, Mark III legs also have a marker of WHERE the knee is on the back. 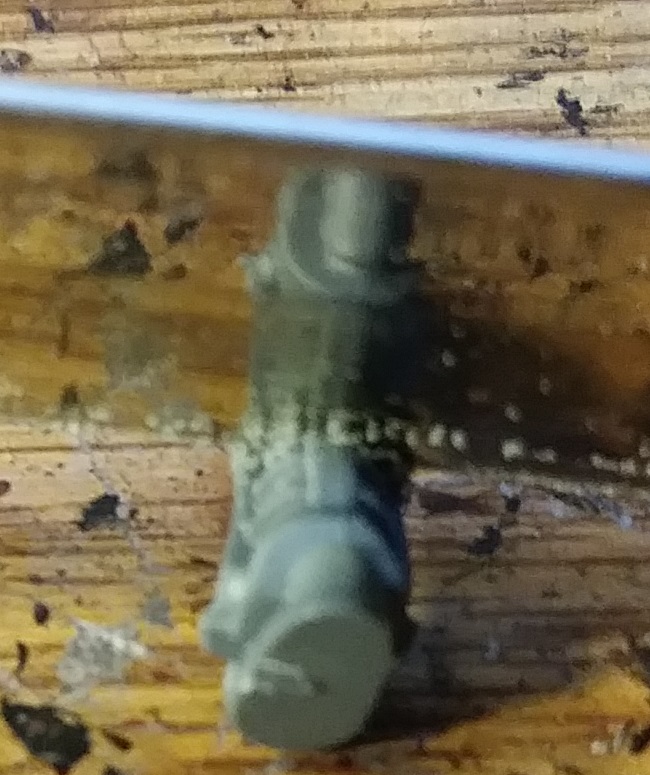 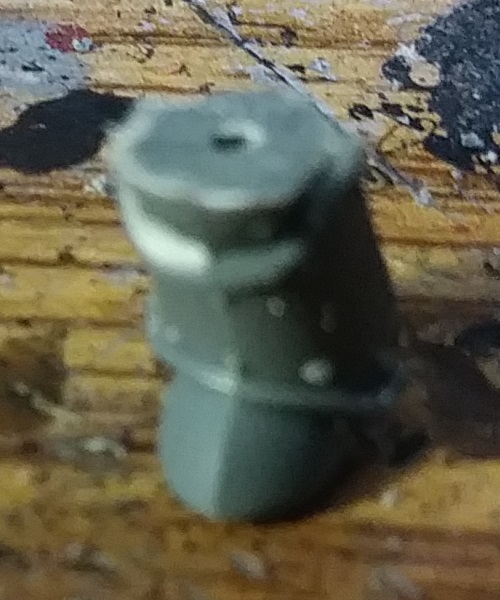 After that, clean up the remaining kneepad on the Mark III leg. 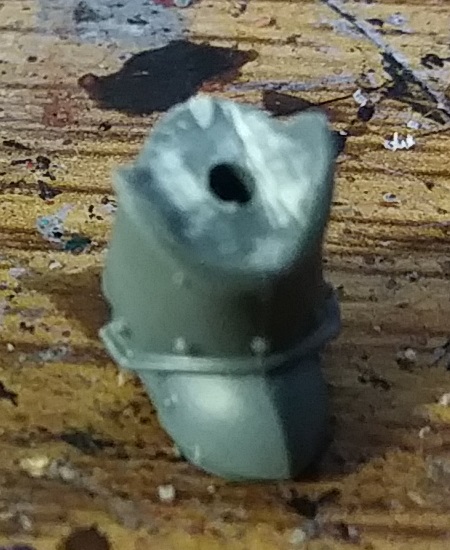 Speaking of pins, drill into the Blood Warrior's legs and glue a pair of pins in, like so: 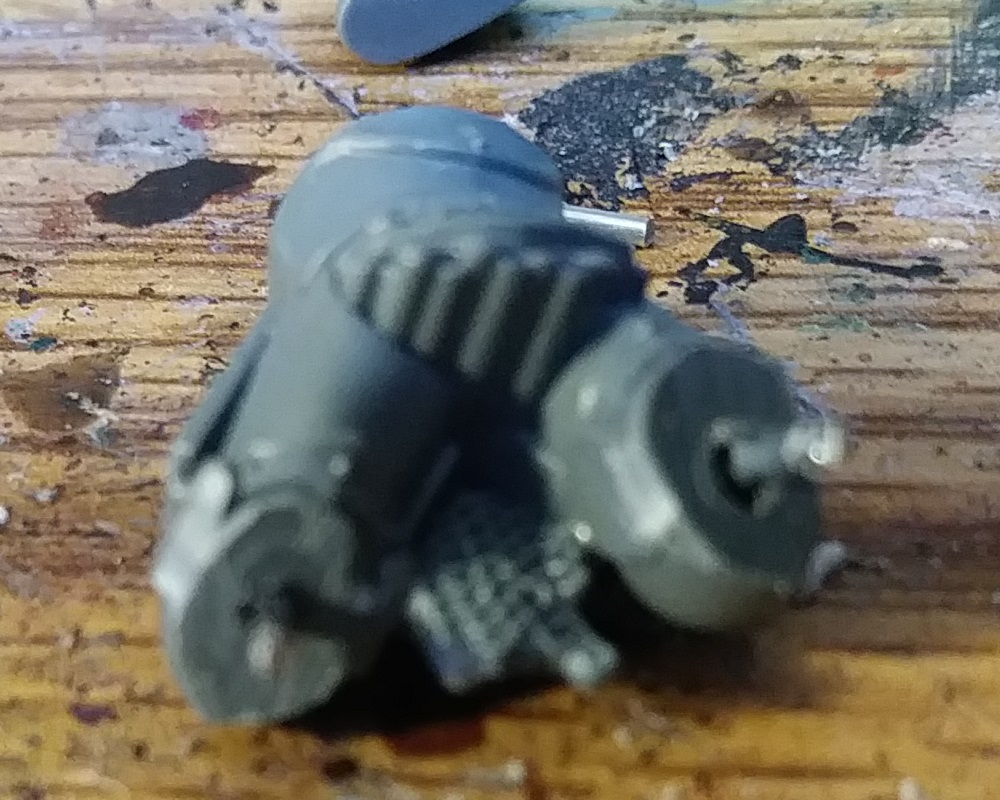 Also, I cannot stress this enough: WAIT UNTIL THE GLUE IS DRY BEFORE DRILLING THE KNEES OF THE BLOOD WARRIOR!

If using plastic glue, if you try to drill into the knee that has to be glued in, the drill will cause the knee to detach if the glue hasn't fully cured.

Next, grab the base: 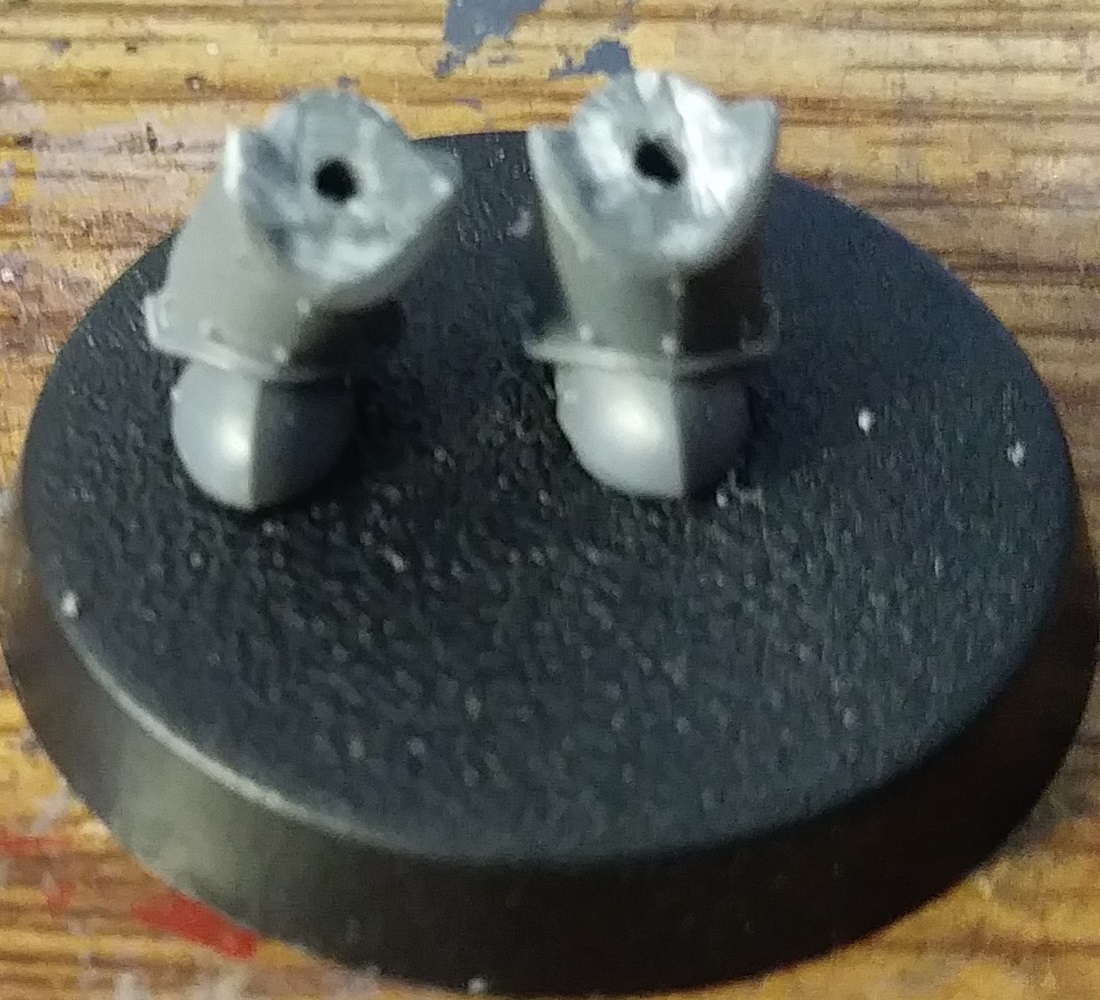 Then, I apply plastic glue the Mark III legs where it attaches at the knee, and use Super Glue on the pin: 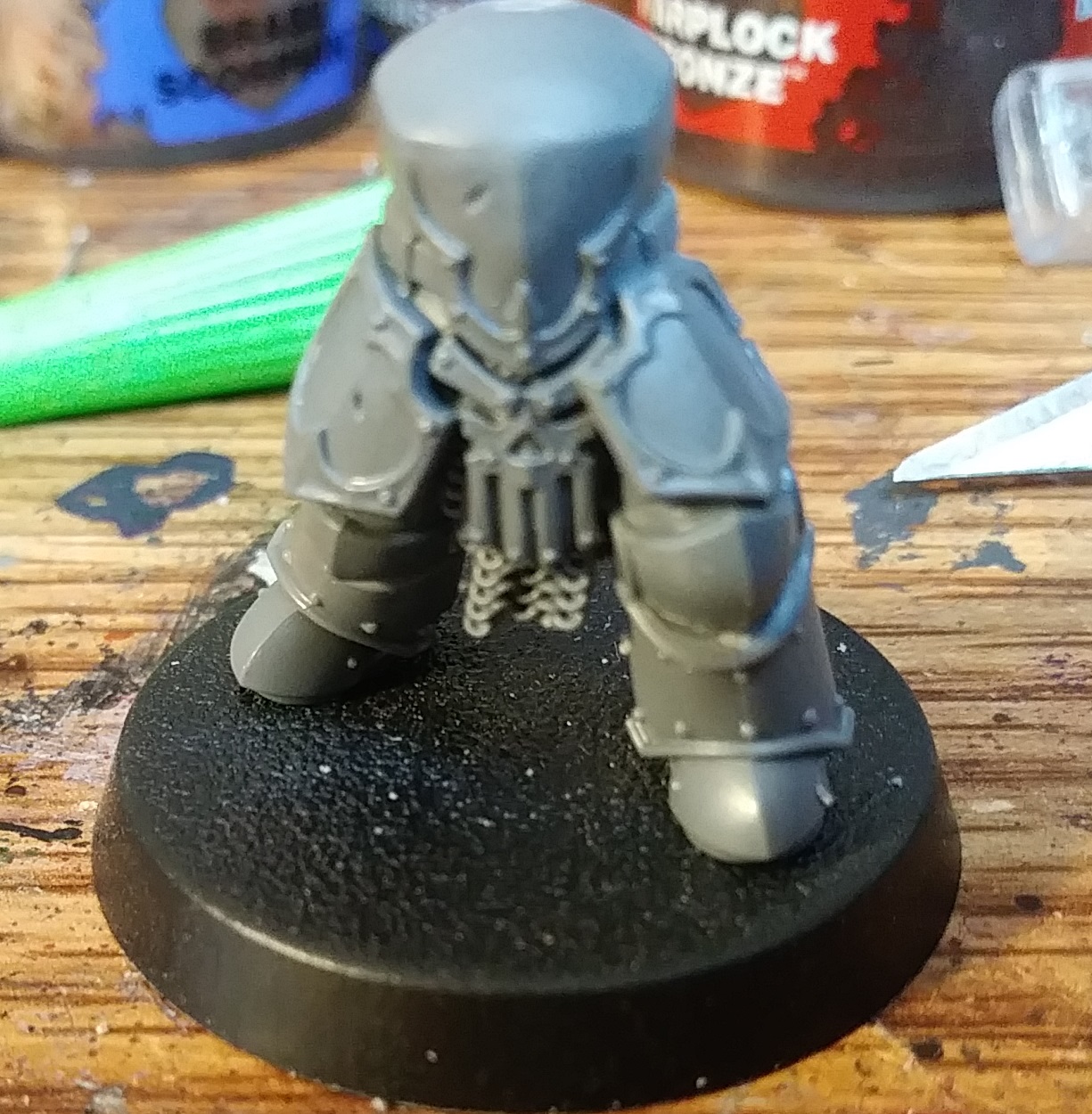 Then, while both glues are curing, I put plastic glue on the bottom of the Mark III's feet, which allows me to manipulate them to make a realistic pose: 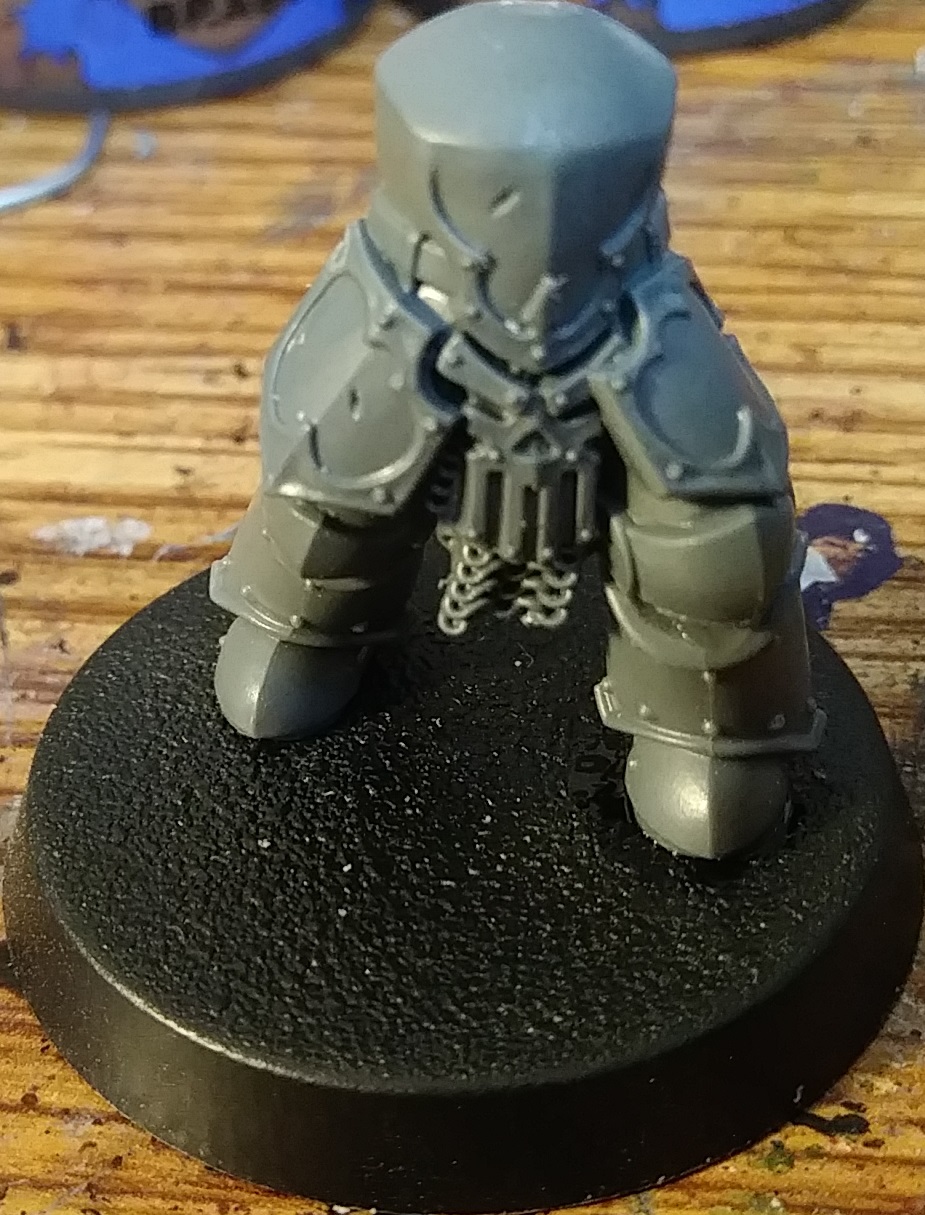 After that, you glue on the Blood Warrior's torso (which I forgot to take a picture of). Now, let me also show the weapon conversion.

For the chainaxe, take one of the Blood Warrior's axe arms, cut the axehead off. Then find a chainaxe, I used a Berzerker axe for this one. Cut the haft of the axe off the chainaxe, leaving just the head. 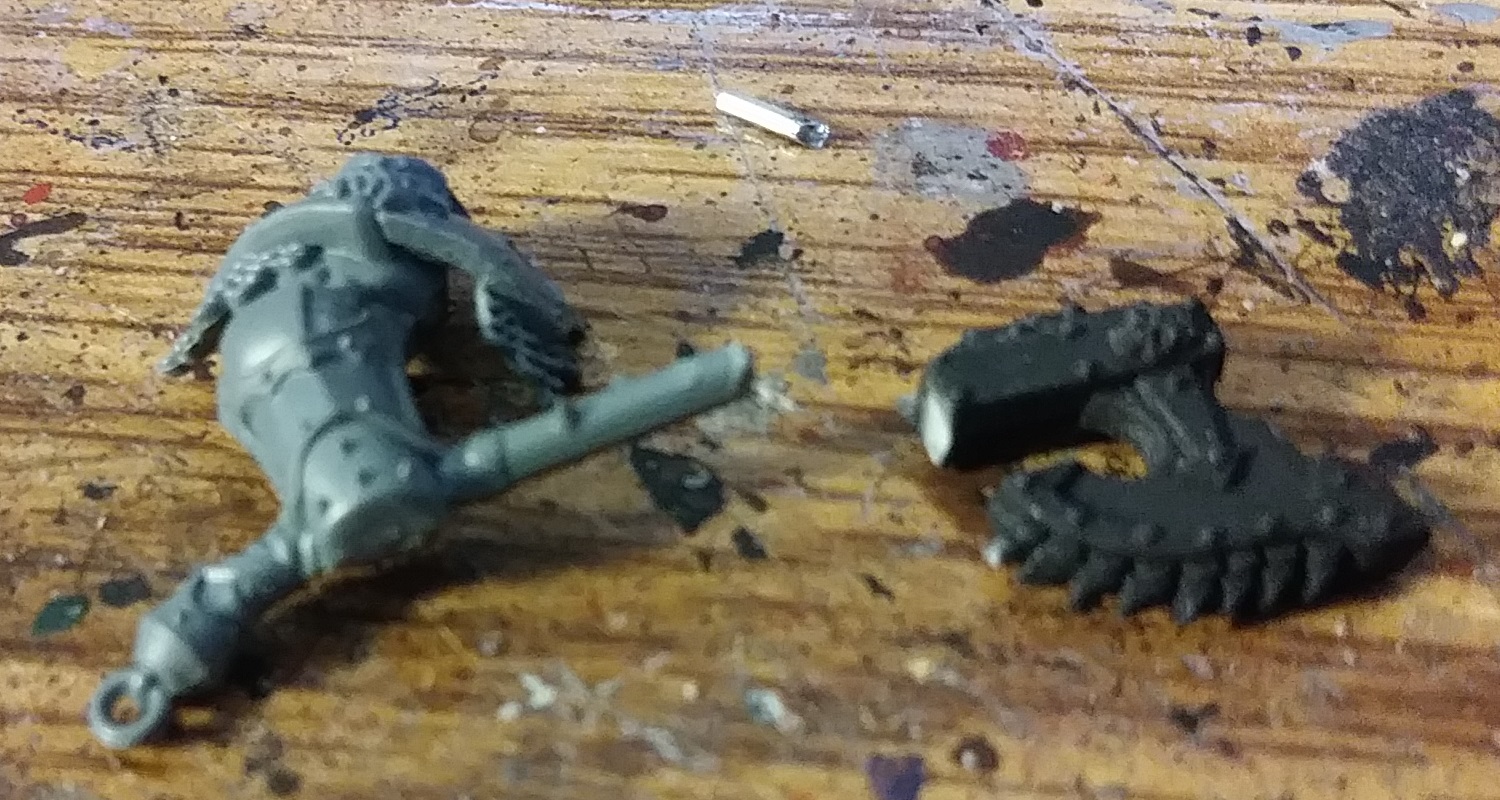 Then I drill into the Chainaxe's head to make a hole for the haft. That's right, no pins required because the haft IS the pin. 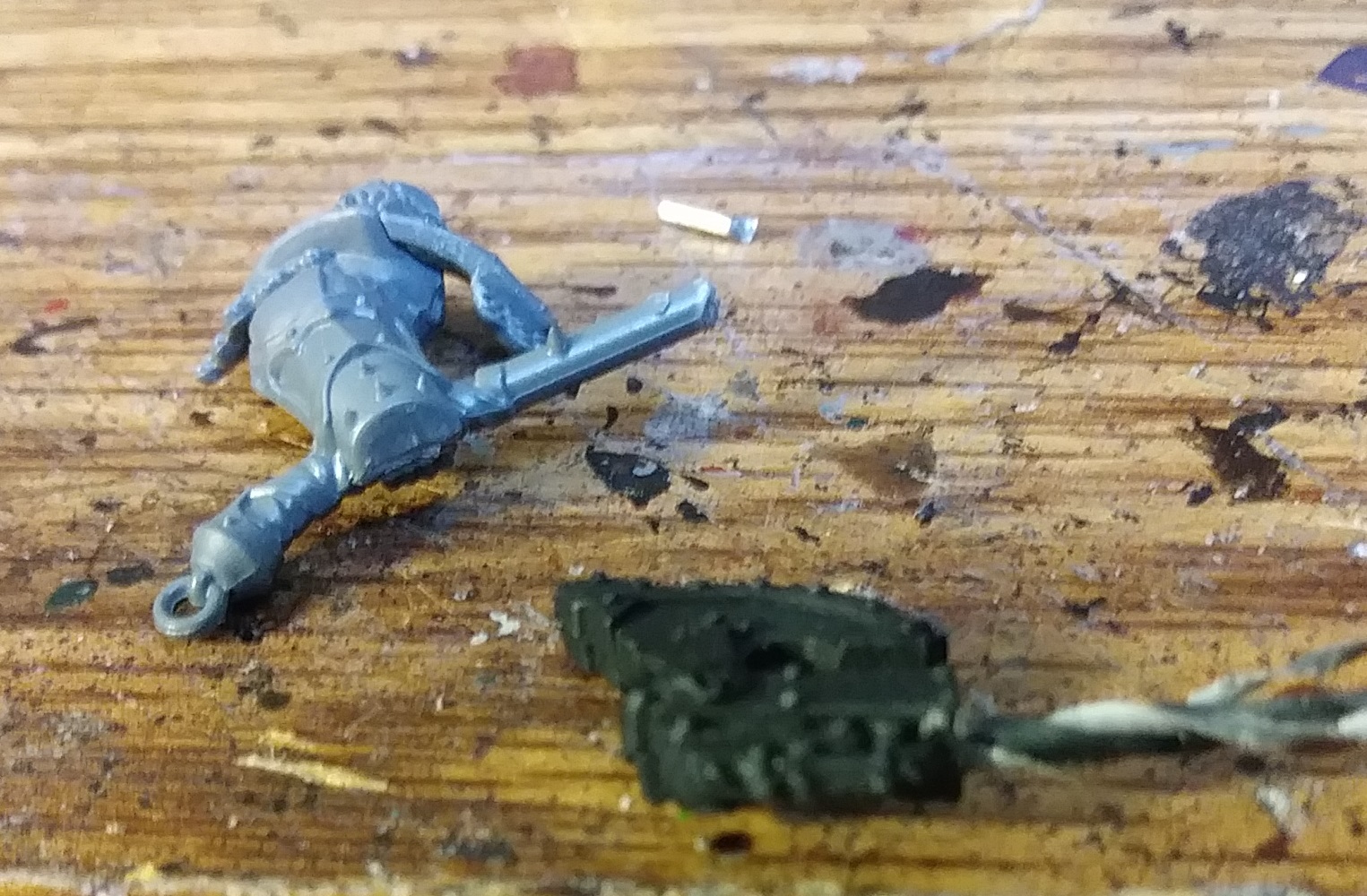 The attach the arms: 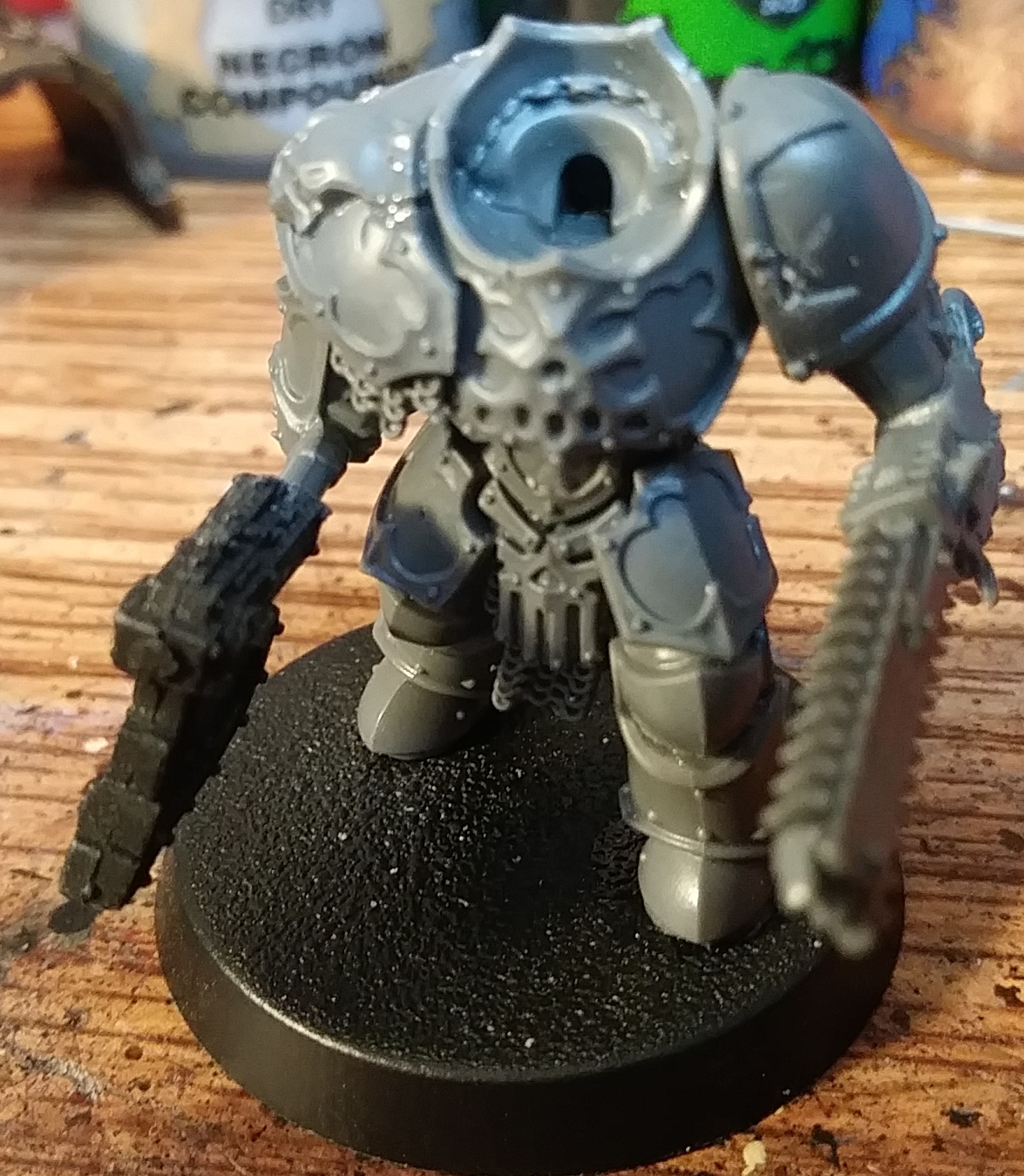 Remember to put the head on in a way that matches the pose. 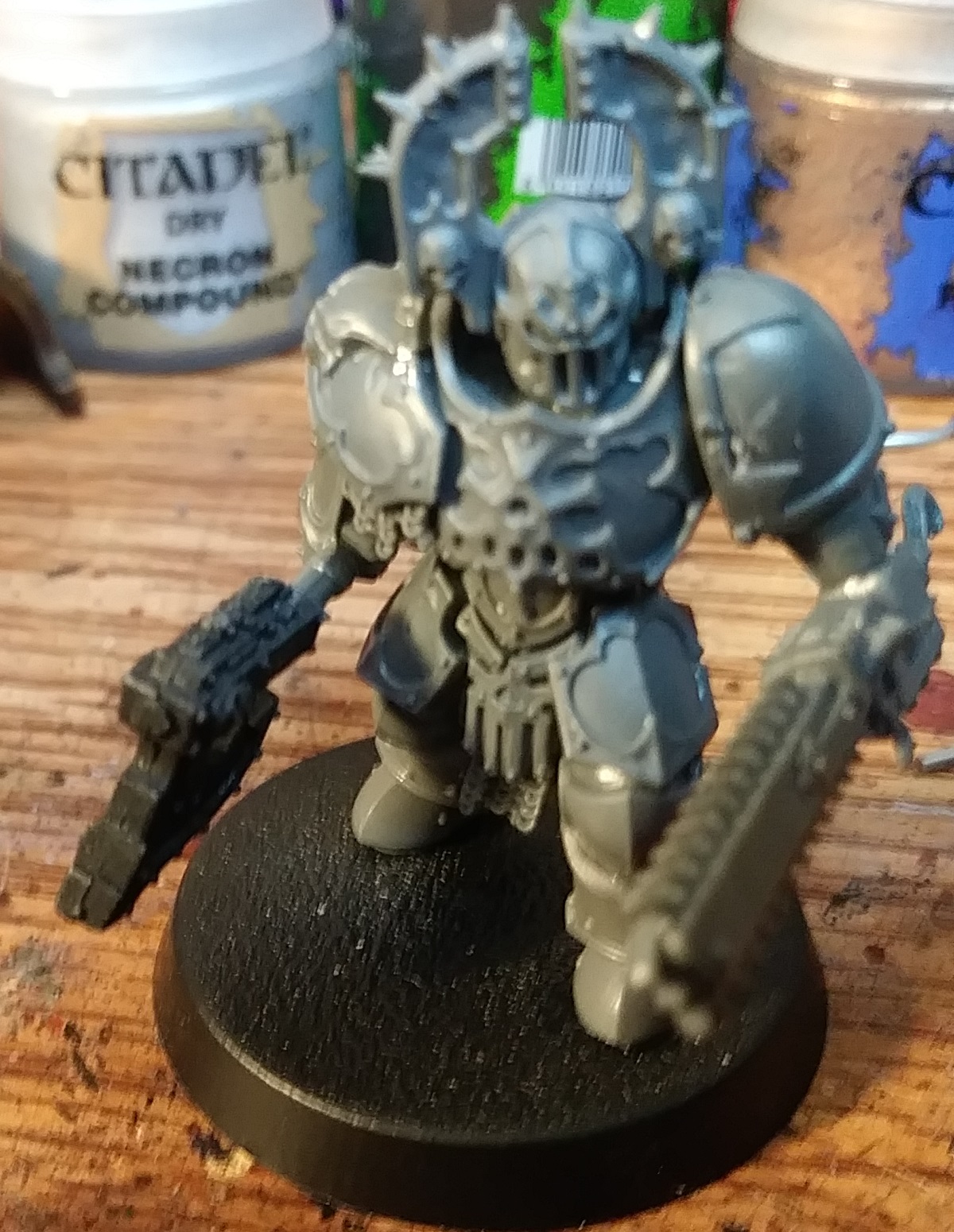 And finally, slap that backpack on: 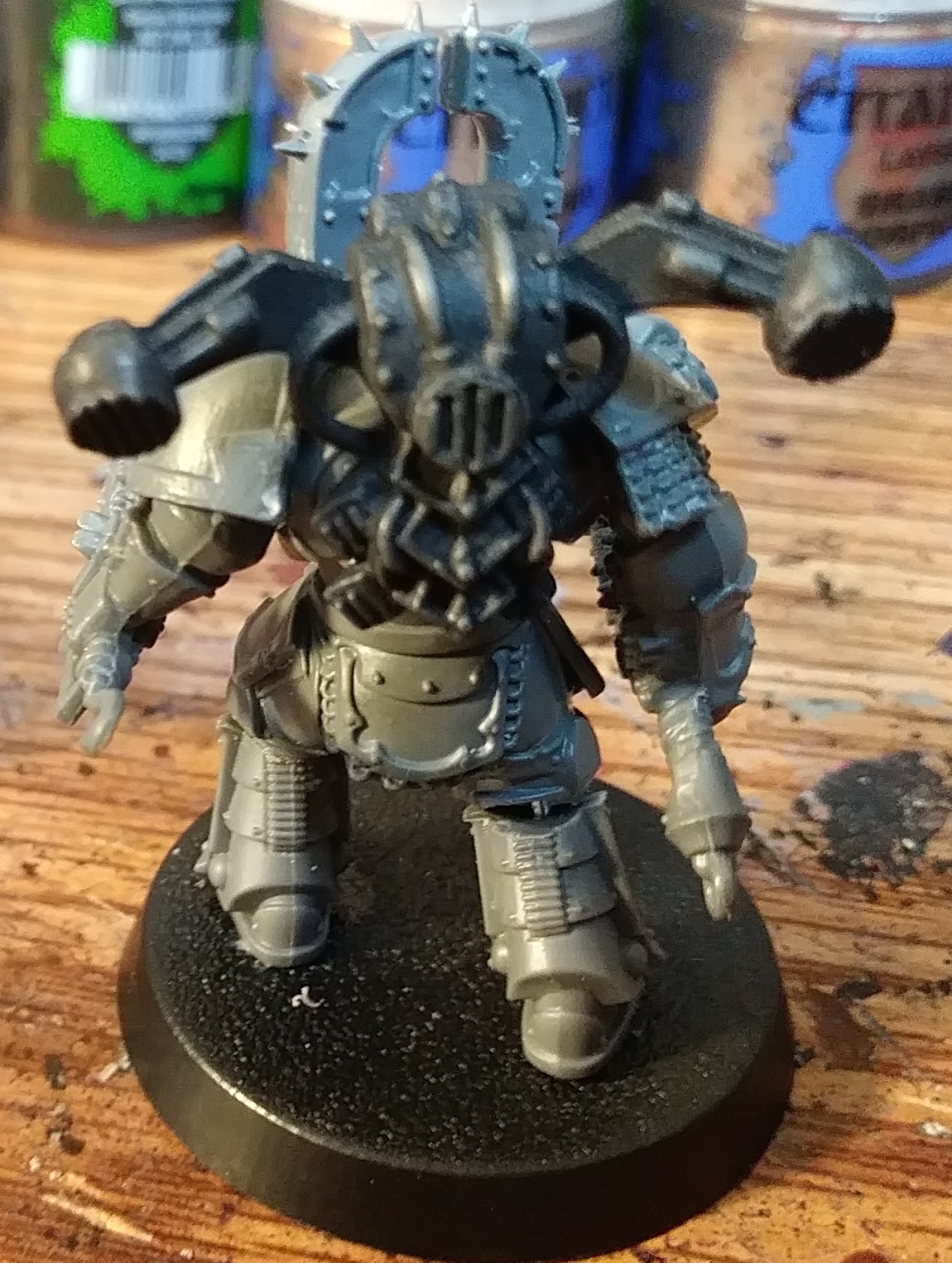 All that needs to be done is some greenstuff gap-filling, but I think most people here can figure out how to stick greenstuff into a gap and smooth it out

And some of the results: 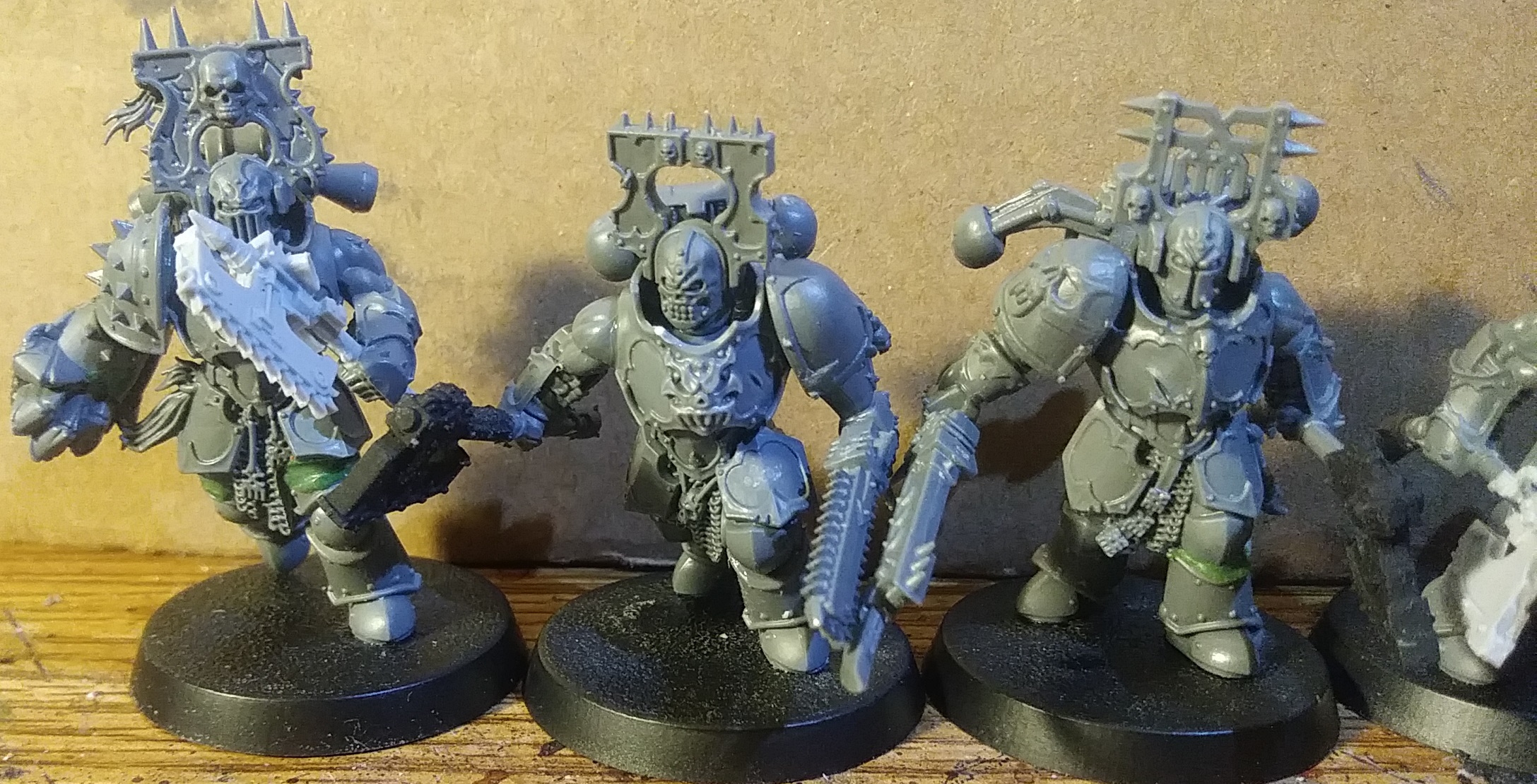 It makes them quite tall and broad, perfect for a bunch of dudes who are Strength 5

Thank you for the tutorial on this! I will defo be forllowing these steps when i am building mine, then adding my personal twist to it

Thank you for the tutorial on this! I will defo be forllowing these steps when i am building mine, then adding my personal twist to it

No problem mate, happy to help!

Hopefully this tutorial will help more people, but the main issue is the price. The conversions are expensive because Blood Warriors are 62 for 10 and Mark III marines are 50 for 10. Hopefully a new Berzerkers kit comes out soon, because this is not something I want to make an entire army off of

Even with my FLGS' 20% off it's still ridiculously expensive.

Also tagged with one or more of these keywords: World Eaters, Berzerkers, Blood Warriors, Age of Sigmar is Amazing for Khornate Bits, Conversion Tutorial