35 replies to this topic

Thanks ranulf, I based it off of early WW2 germans, as I really liked the two-tone field-gray and gray schemes they used.

qualifiers, the academy, and graduation. That doesn’t even count the time to complete

two tours on orbital, which are fugging useless if you ask me.

damn ready to put those skills to use killing whatever the fug decides to get in our way.

Instead, they stick us in frakking soft-cover trucks outside this Emperor-damned city so

that the Generals can march around inside and look cool.

Throne above, it never ends.’

Seen here is Squad 2-1, Aegis Company, 9th Salient Voltigeurs, known informally as the Headsmen*, during the opening of campaign operations on Icarus. The presence of grav-chutes amongst some of the squad members indicates these picts were captured some time prior to the Tolmaghtan Sprawl Counteroffensive, the only time period in which the Voltigeurs operated in numbers above platoon strength.

Like most other Voltigeur squads, it is organized and operates following established Voltigeur doctrine, with an emphasis on prolonged operations without supply or refit as light infantry. As such, like its sister units, it counts a munitions specialist, vox-operator, and weapons specialist amongst its ranks. 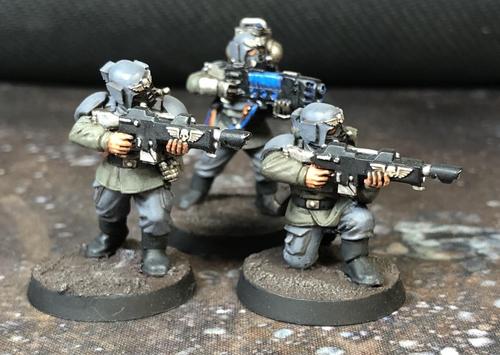 Such tactics have served the Voltigeurs well in their many millennia of service, allowing them unparalleled mobility in-theater, a valuable asset for airmobile troops used to acting both as a reactive force and as a spearhead for Imperial operations. 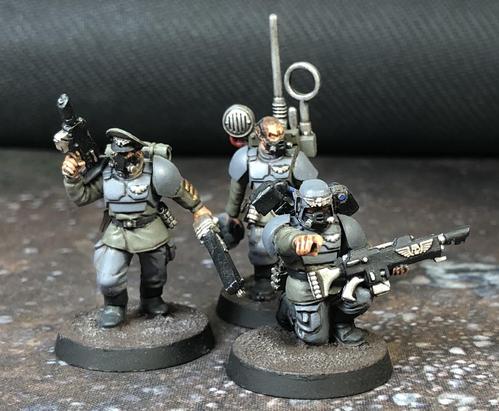 However, during the Tolmaghtan Counteroffensive, this innate flexibility would serve 2nd Platoon especially well, as they found themselves caught up in a bitter running battle with the insurrectionists. Both sides engaged in brutal assaults that lasted two days before 2nd Platoon was finally able to make their way to an Imperial Strongpoint outside the Akaashic Straits. 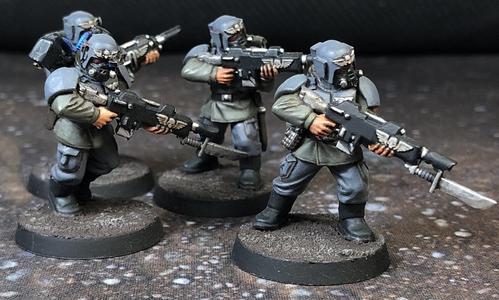 Despite this, Squad 2-1 would quickly find itself pressed back into rescue operations, and are credited with later assisting Damage Company, 73rd Salient (Armored) in consolidating Imperial Control of Complex Gamma-28-05a.

*Editor's Note: Such epithets are relatively uncommon amongst the uncharacteristically taciturn Voltigeurs, who consider such publicity as an honor reserved for specific events or deeds of great renown. The 'Headsmen', as they are now known, are the 9th's claim to fame, and earned their title during operations on Samarghast some sixty years prior, where they reportedly '...engaged and destroyed an archenemy [commander] in the Segardax Sub-sprawl during the Iron Warriors' push on Korelia Hive, which disrupted the Iron Warriors' offensive, and bought enough time for Imperial reinforcements to arrive and repulse the archenemy attack'. Independent investigation by both Ordos personnel and myself can verify the authenticity of these claims, which is truly remarkable, considering that Squad 2-1 emerged from that maelstrom with less than 40% casualties, going on to serve heroically throughout the remainder of the campaign.

Their legend, cemented through rumors and an exceptional service record during the Korelian Reconquest, would grow until they were caught out by indiscriminate shellfire in the Korelian Sub-Hive Sprawl during the close of operations, which virtually wiped the squad from existence. Indeed, only two Voltigeurs are known to have survived, and are almost certainly not counted amongst the ranks of the 9th today. For their actions, the squad was posthumously awarded the Honorifica Imperialis, and counted a number of Astartes from the Raptors Chapter as part of their funeral procession, a singular honor that no other Voltigeur unit can claim.

I don't know what you're talking about...

It’s been a very enjoyable read so far, man. Really impressive background and models, and I particularly dig the color scheme on the Voltigeurs.

I was a little unsure of the color scheme at first, but it quickly grew on me, and translated much better than I thought it would on the vehicles.

'The Headsmen' look great, big fan of the respirator heads, they give a much more sinister feeling than the regular heads.

I totally agree, and have been a fan of these heads since I first saw them. They remind me a lot of Stormtrooper/ODST helmets, and that vibe was very much what I was going for with the Voltigeurs.