Some beginner questions & my Munda stuff

132 replies to this topic

Did some more playing around with lists and have a few versions.

The first is the best I could do to fit in the heavy stubber, but with the change to Bulging Biceps I just recently discovered and not immediately having access to a suspensor, I really wonder if the cost is worth it (it costs more than 2 gangers).

Swapping the heavy stubber for a second grenade launcher frees up enough points for a telescopic sight on the leader's bolter to keep him accurate at long distance (and hopefully out of harm's way as much as possible) while giving everyone else a back-up stub gun for those close encounters.

#3 trades all those stub guns for a juve with 2 of his own to get the full 10 man size to start.

I'd love to hear some opinions on how awesome the heavy stubber would be even without a suspensor, but barring that I'll probably go with #2 because it seems more reliable and flexible than 3.

I ended up taking a Heavy Stubber with my Cawdor and in two games it’s killed an Escher Ganger and wounded an Escher Leader. Positioning is really important. I was able to set it up with reasonable LoS and a bit of cover so it didn’t need to move all game. The Escher Heavy Stubber didn’t get to fire a single shot due to poor initial positioning.

So far, I think they’re alright, but not the be all and end all. I wouldn’t stress too much about not including one.

Orlocks can get Nerves of Steel which is dead handy for guys with Heavy Weapons, I haven't got the newer rulebook yet so forgive me if I'm wrong but Nerves of Steel lets you make a cool check and stand back up without using an action. I like your first and third lists better since your dudes don't all need a sidearm with autoguns being easy enough to reload. The performance of the Heavy Stubber will also vary hugely if you play Zone Mortalis games or 3d games - the heavy weapons will really struggle in ZM without Suspensors but should be fine in 3d if you deploy them well.

With regards to the comment about heavy weapons not doing well in ZM, I think it depends on placement. They act as good area denial and if you can get a decent LoS, they’re pretty handy. In my last game, my Heavy Crossbow held back four Van Saar gangers on one flank as I was able to keep them pinned (and occasionally on fire, thanks to a tactics card). The other advantage of the blast was that you could clip people who were just out of sight by aiming at a point you could see. Perhaps this is more relevant to blast weapons in ZM, but I still wouldn’t underestimate heavy weapons in ZM.

my last attempt at using a heavy weapon in ZM was a disaster the guy missed a load of shots early on then got taken out haha!

I prefer more mobile weapons in ZM. If I have the choice, I go for a chem-thrower over a heavy stubber. Special weapons work well too, especially flamer or plasma.

I prefer more mobile weapons in ZM. If I have the choice, I go for a chem-thrower over a heavy stubber. Special weapons work well too, especially flamer or plasma.

Combat shotguns are also amazingly fun in ZM - my Escher got wrecked in one of my early games as they all failed to hit a Goliath with combat shotgun who went on to take half of them out. When the credits start to roll in BCK you might want to grab a couple

Seconded - I use combat shotguns on my Goliath's and they're fantastic in ZM. Expensive though, so I only run one. 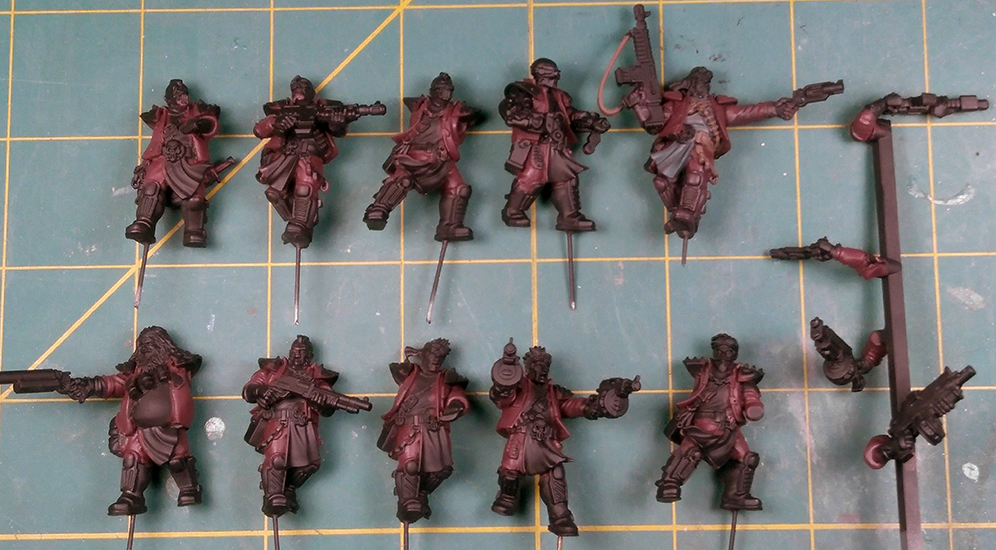 All the shirts are done in grey and I swapped from doing the shoulder pads in the darker red color of the boots and gloves to the same grey as the shirts. 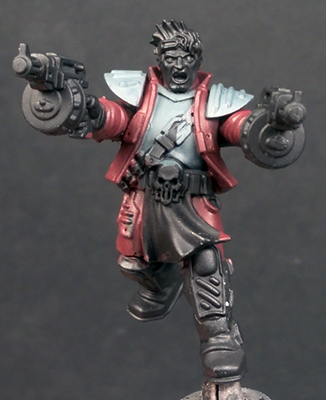 Loving the progress so far, keep it coming!

Nice to see some progress Kage. I’ve been working on some MDF terrain today. Looking forward to seeing these guys when they’re finished.

A quick update on my guys along with a mini-tutorial on my main thread about using color theory and color harmony to help me with the paint scheme for these guys by finding a good accent color for the loincloths: 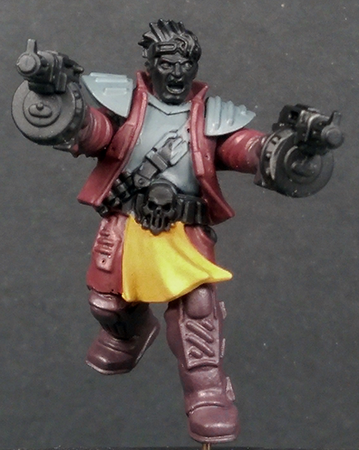 The color is VMC Ochre Brown and is both darker and more brown in person. All ten have their loincloths based, and mad did it take some time! After trying to put the ochre over a black base and realizing how many coats it was to take, I repainted them all with the same grey of the shirts and even then it took about 5 layers to get a good amount of coverage. I love the cheap hair dryer I bought last week to speed up this very thing.

Also, RANULF! My brother bought a box of Van Saar and I'd like to get some tips on playing them for him, and beating them for me!

Nice progress, and good luck against the upcoming Van Saars. I hope we get some battle reports of those games with your brother!

I noticed you entered your gangers in ETL. That would make you eligible for this event as well, have you considered joining it? I will include my second batch of the Walking Pox in my second vow, and write something about the Battle for Sludge City... hopefully in time before it ends. Would be cool to see your take on this too.

If I can come up with an idea in time, maybe.

Started working on the bases after spending way too much time deciding on how I wanted to paint them.

Bottom row is with a few washes and the top is the sponge paint chips effect in progress.

The lower row would already look cool for games like "Infinity", for a clean industrial appearance. The top row is so much better though, and just perfect for "Necromunda" - just awesome!

Thanks! I wanted to go even heavier on the chipping based on some of the restaurants I worked at earlier in my life where they'd painted the concrete floors in the back of the house they were chipped to hell. I made myself to take a break from it at this point and evaluate it tomorrow to see what I think - though I'll probably leave the chipping as is and just do a little more with washes.

I think it looks great as it is. If at all, the heavier chipping should only be applied on a few spots, and maybe not on every single base. Just try it on one and see if you like the result.

For the duplicate bases I decided to focus some heavy weathering in different spots on each so they wouldn't look identical and the final weathering washes and effects will go a step further in setting them apart.

Since my airbrush is out of commission and I've never done much of the sponge chipping until now, I was having some problems with finding a good consistency for the paint last night. At first, I was using some black straight out of the pot but it dried really quickly and after the time spent dabbing off the excess, I'd barely get any work done before I had to load it up all over again. I then tried some of my Vallejo Air black paint which is already pre-thinned, but it wasn't thick enough and left very faint and small chips.

Today, I tried some of the cheap acrylic paint you get from the craft stores in the 2oz bottles and it's a bit too thick right out of the container, but thinning it just a tiny bit got me a very sweet spot for paint chips.

They look great - now get some finished models on them!

I decided on how I wanted to paint the weapons so hopefully I can get these guys finished in the next few days. I'd intended to get make some progress today, but I was doing yard work and the heat just drained me. I will make the deadline!

C+P from my main thread:

I recently discovered that a Hobbytown USA near me now stocks the Vallejo Mecha paint line and I grabbed a few of the weathering washes to try out on my 'Munda bases: Light Rust, Dark Rust, and Rust Texture. I wanted some stronger color contrasts with rust tones to tie into the warm colors of the gang's paint scheme and also the look of the board tiles that came with the boxed set and damn are these washes nice. Even being as careful as I can be with the GW washes, there's still plenty of tide marks or splotches, but these Mecha washes can still be moved around after a short time without leaving tide marks (I was using one brush to apply the wash and a second damp brush to move them around, same as the GW washes in the above pics).

Here's a before and after comparing duplicate bases. 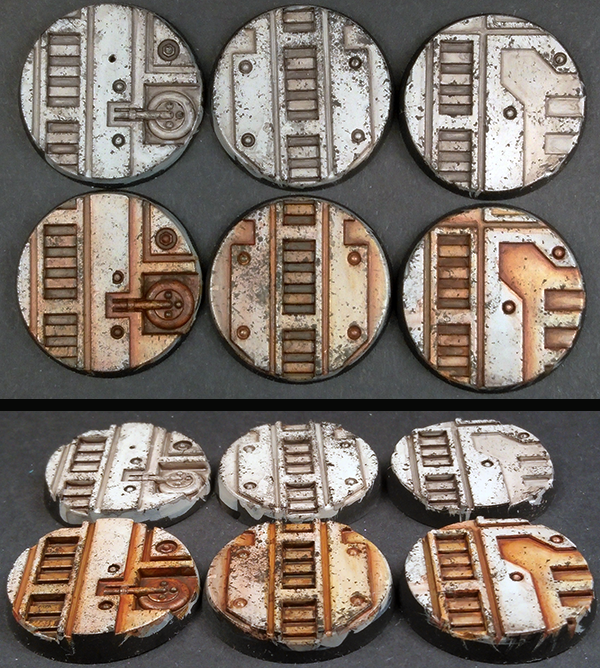 To get the effect I have on these, I very lightly thinned Light Rust and lined the crevices where moisture might accumulate and then used the damp brush to blend it out into the surrounding area so it wouldn't have a sharp transition. I did the same with Dark Rust, but since it's quite a bit darker, I blended it out less and kept it closer in on the crevices. The Rust Texture I used sparingly in specific spots like corners, on the left base I stippled some of it onto the round plumbing looking thing with the pipe leading away from it, and more heavily in the lowest spots of the the areas that look something like a stepped grate because water would sit in those areas the longest.

I plan on trying out some more of their washes, but give high marks to the rust colors.

Damn, I just ran out of Likes to give. I thought your bases could not be improved - I was wrong!

Thanks! I'm trying to break some of my old painting habits and that includes trying something different from my old style of desaturated, realistic paint schemes and subtle contrast. Looking at the bases over the past week or two as I moved past my desk, they looked plain and boring from even a few feet away and I wanted to change that; I'd planned on adding some subtle rust here and there but I turned up to 11 (for me).

If I don't finish the figures in time for the Turf War, at least the bases are done. 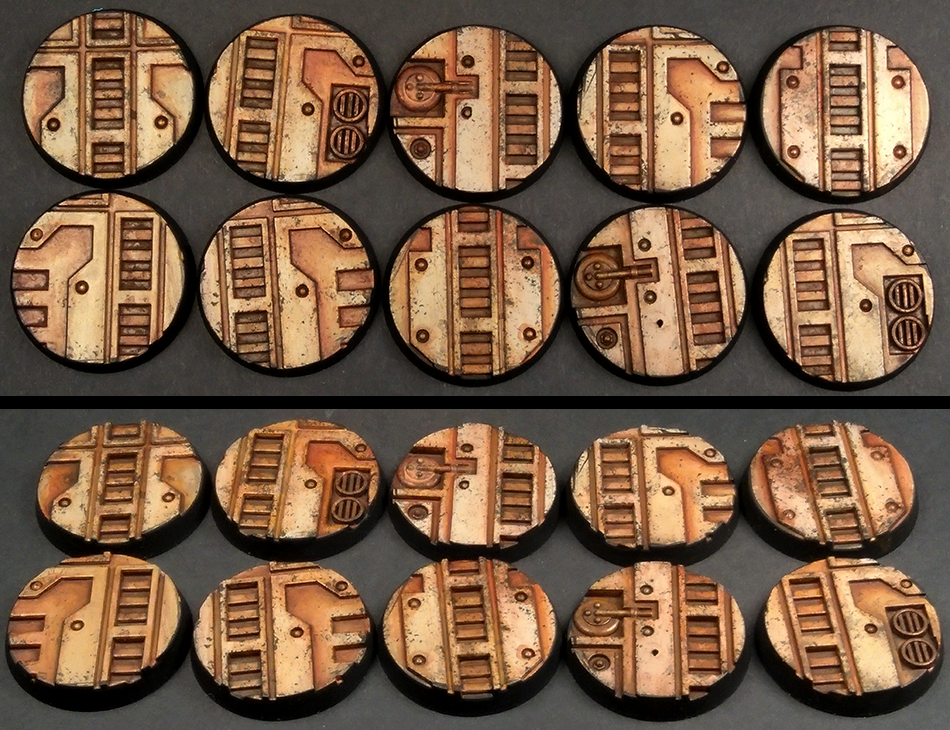