After taking quite a deep dive into Necromunda recently, I have decided to make this thread my "Necromunda home base".

You will find both my Nurgle Chaos Cult "The Walking Pox" as well as the more classic and "normal" Chaos Cult "The Order Of The Bronze Star" in here. There will be more though! I have an assembled box of Cawdors, plus 20 each of unbuilt Goliath and Escher, plus some older metal models, plus conversions from the depths of my collection - and all of it will see the light of this Plog sooner or later. And neither of my two Chaos Cults is close to being finished...

Spoiler
Greetings, denizens of the Underhive. You like shambling undead, tentacles and the stink of rot and decay? Good news - you have come to the right place!

In this Plog I will document the progress of yet another project of mine: a Chaos Cult gang for Necromunda based around the Poxwalker models. This all started with some musings here, but I blame Lord Ranulf and his Turf War II for kicking me down inspiration road! What began with a random thought has now tempted me to go all in. Let's see how deep this rabbit hole goes...

There is also a thread about a campaign from July 2019 onwards, dealing specifically with the models used and events during that campaign, done over here. 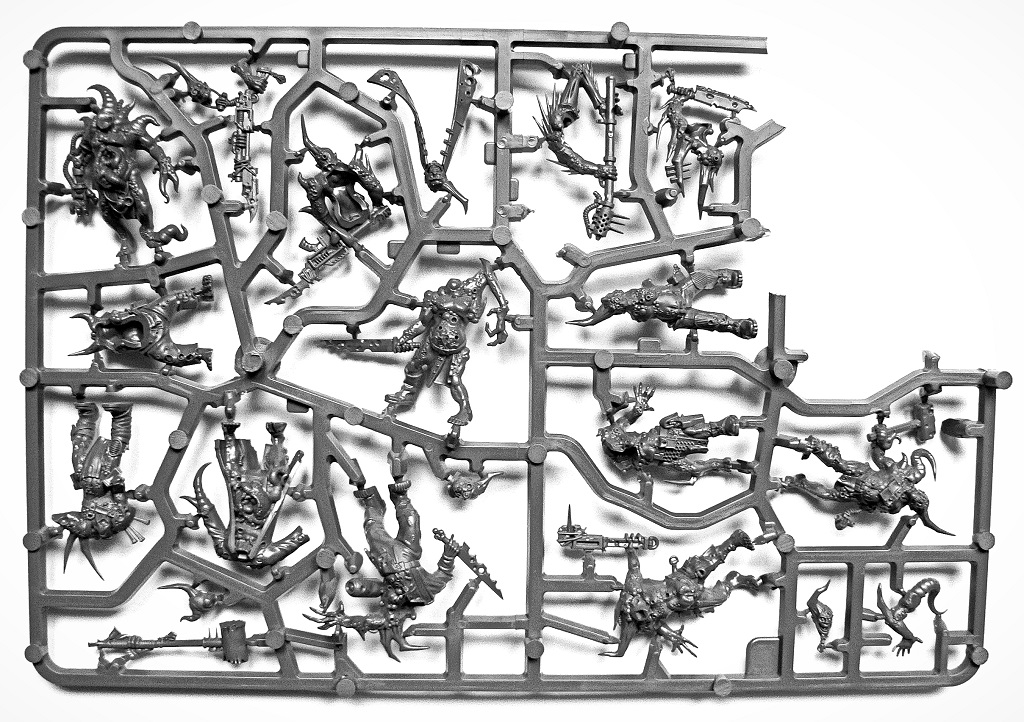 The first wave of bullet magnets is ready for priming!

While I’m sad you’re not joining my massive Cawdor assault*, I’m looking forward to seeing some more activity on the Necromunda thread.

Keep up the momentum.

I have a Cawdor gang in build-up mode, and I will send them into the madness that is Sludge City - just not today. One shambling step after another...

The latest Apocrypha: Necromunda got me thinking again about Karloth Valois: 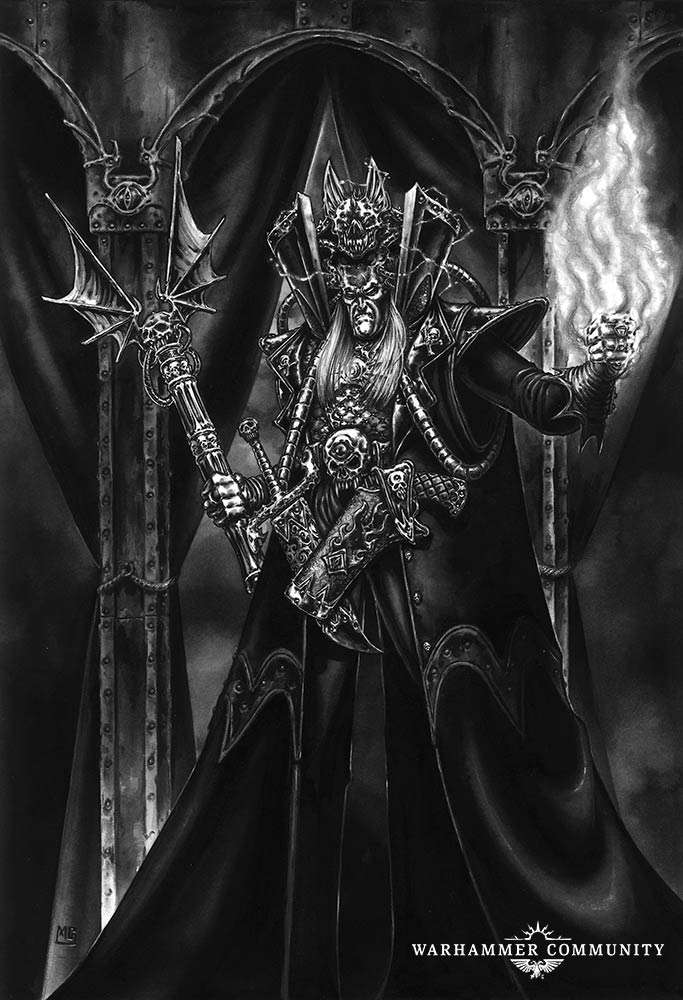 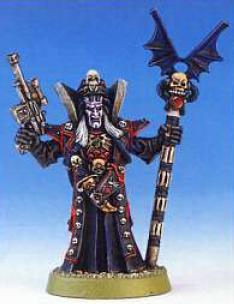 While the model was excellent for its time, I think it did not age too well. And I have little to no idea where to start for a modern inspiration - with the fear of a new FW model making it obsolete fife minutes after I have finished mine. 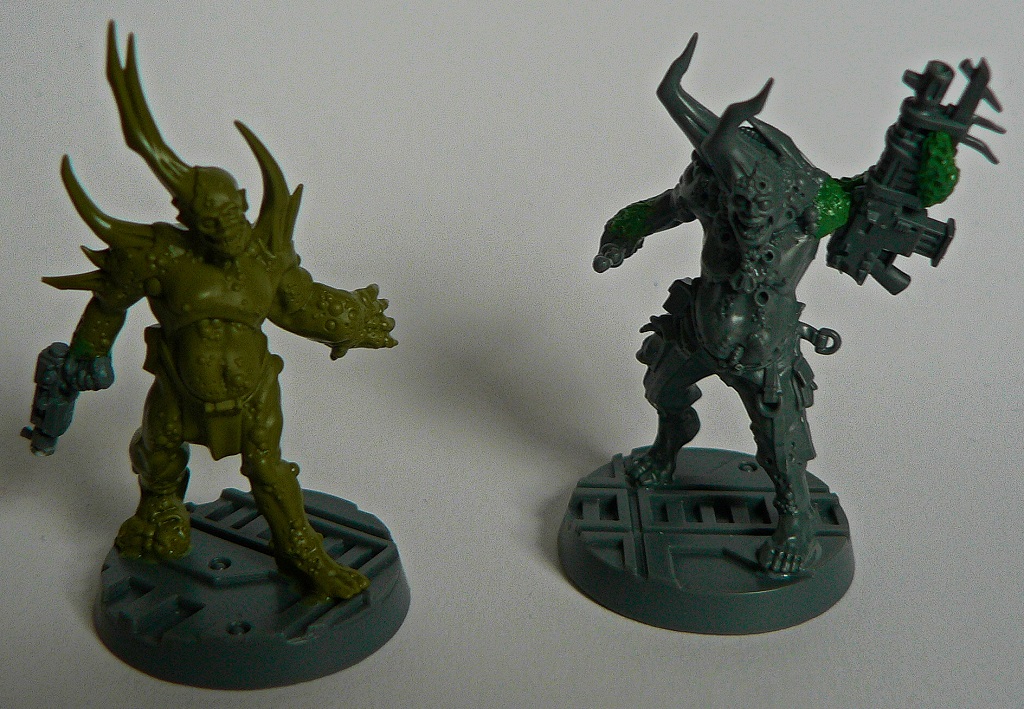 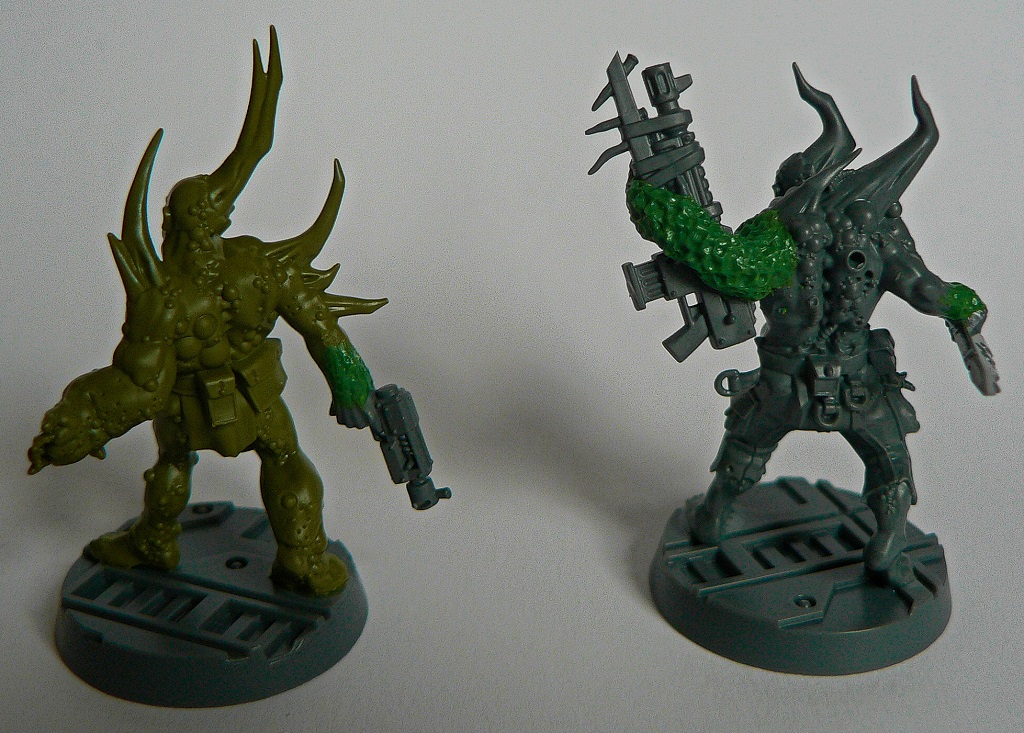 The Magus is a great start. It has one huge downside though: only being available in a 50€ set!

I had not thought about these two actually, interesting. Both would need a lot more work than the Magus, but they are much more affordable.

Thanks guys, I have some thinking to do now!

eBay is your friend. There are a few up at the minute around £15, which is about what you’d pay for a clampack character. If you’re in any trading groups, you can probably get one a bit cheaper.

Nothing spectacular for now...

... just some stock Poxwalkers and their buddies. The two conversions already shown got some company: 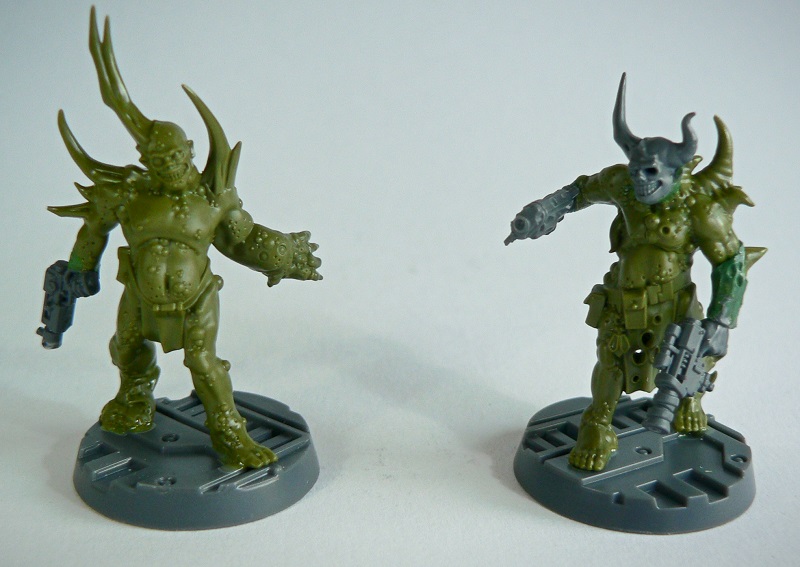 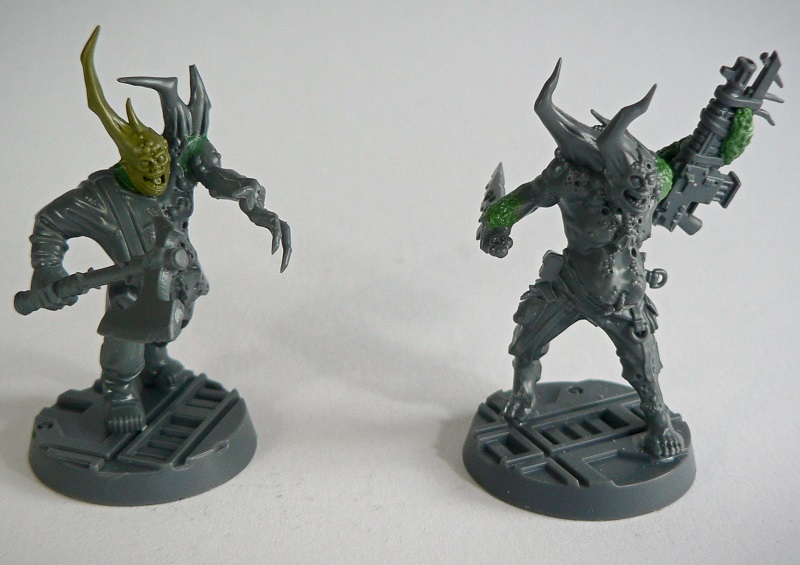 Then there is my favourite build so far, a former Goliath, now poxwalking: 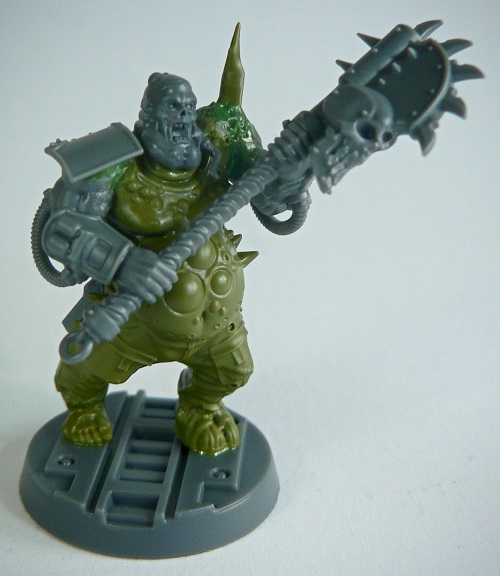 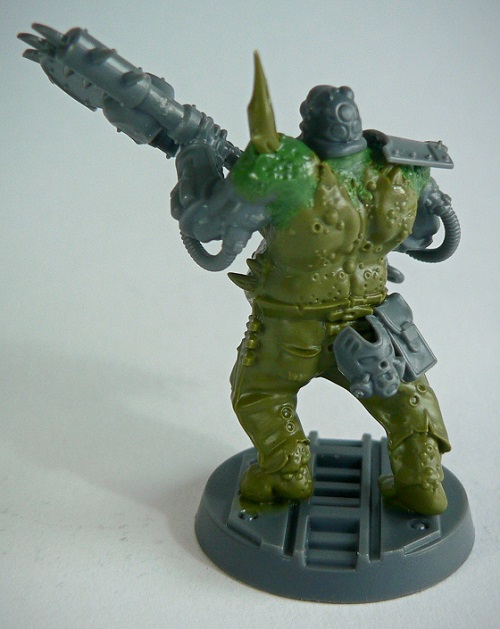 I really enjoyed doing this one. Keen observers will note the third "Nurgle-eye" on the weapon. The head is from the Glottkin kit, everything else is a Poxwalker with Goliath bits - plus some sculpting.

I’ve been working on some Nurgle cultists for when our current campaign draws to a close. I threw together a starting list with everyone getting a unique weapon, which will need a good few conversions. It’s probably not overly competitive as I’ve got a leader with a two handed hammer, but it should be good fun.

I played with some Contrast paints last week at my local GW and was able to bash out a reasonable looking Poxwalker in about fifteen minutes over lunch, so I see a few of those pots in my future. Shame they’re so expensive.

Looking forward to seeing what else you’ve been working on.

Thanks. Chaos Cults have access to Chain Glaives, so that it will be - despite being a huge waste of points on him. He is not supposed to be the leader (at least WS3+, S3 and A2), but a champion (only WS4+, S3, A1). Doesn't matter, looks cool.

Concerning Contrast paints and Poxwalkers: aye, you can get good results with them. You need about half a dozen different paints though, so it is getting expensive fast...

I had never thought of that model before, but this is a good suggestion. Building Karloth is no high priority for me right now, but I will keep this idea in mind - thanks for sharing!

The first wave of the Walking Pox is painted!

These ten were pledged for the Battle for Sludge City in May. I also got an eleventh model painted. Originally built as a Witch for a band of "normal" Chaos Cultists - hence the pose as if he (she? it?) wa casting some spell - it will now see duty as another regular Pox-Cultist: 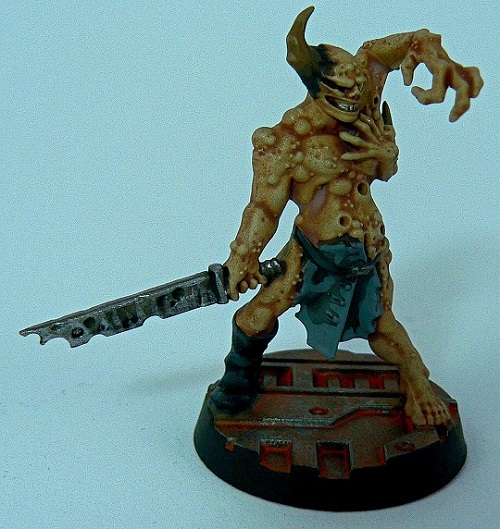 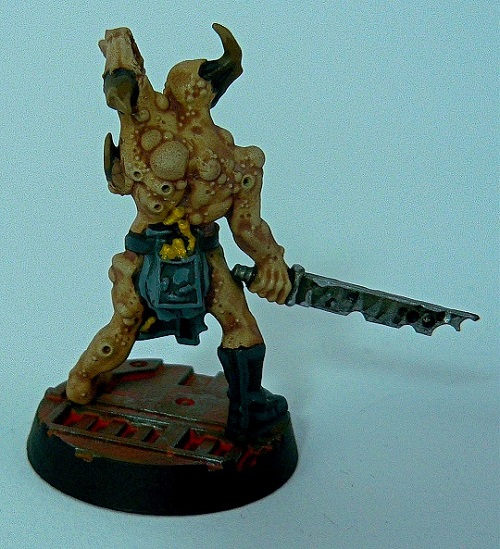 As you can see, the painting is nothing fancy, but they look really good from an armlength away. After some protective varnish they will also get gloss on their tentacles and gore bits.

Now on to the next wave!

Something a bit different. When Brother Dallo immortalised me by including a friendly Poxwalker by my nickname in his Cawdor gang, he sort of forced my hand. I will of cours return the favour, so meet Cawdor Chmpion Brother Dallo: 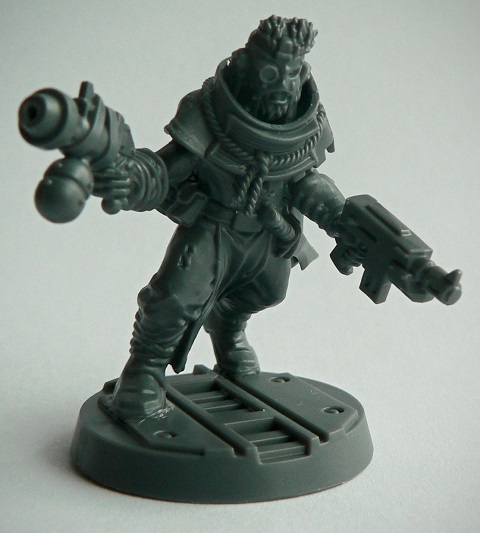 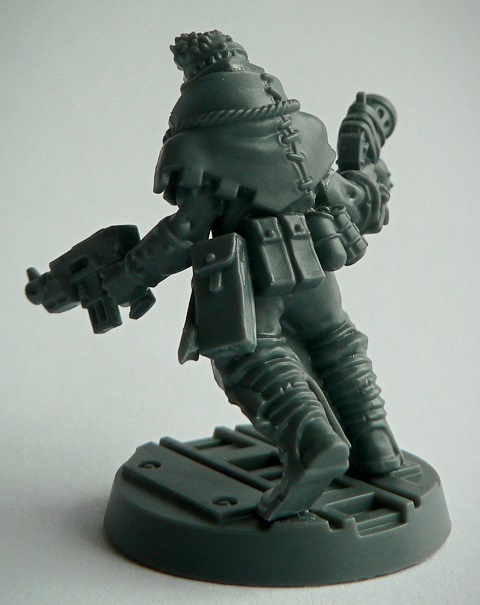 A Chaos Cultists was the base for the conversion (see the lower right here), with a surplus cowl and the handflamer from the Cawdor kit, plus a bag and some grenades from the Space Marines range. Pretty easy, and looks great next to regular Cawdors.

I also finally put the last bits of Green Stuff on my Sheenbird:

The thing that did cost me the most time and nerves - building the mechanical legs and feet from plastic rod and AT Knight feet - can be almost not seen on the final build. Other than that I am pretty happy with how it turned out, even if it is basically only an Ogre Kingdoms vulture on an Imperial Sector lamppost. Some papersigns (GW forest and Green Stuff) will get zealous scribblings on it, while the Sheenbird watches over a cultists head that was previously cut off.

Now back to Chaos!

What a handsome looking fellow!

Did you take any WIP shots of getting the hood to fit? I’d be curious how you managed it and kept the arms. Whenever I’ve reused hoods, I’ve never kept the arms as Cawdor tend to have noodle thin arms, so the reasonably thick Cultist arms are hard to fit into the hood.

That Sheen bird is really cool too.

You should be proud of those conversions.

The conversion was not overly complicated, due to the base model coming in two parts on the sprue: body with right arm, head and left arm. Check it on the sprue, lower right: 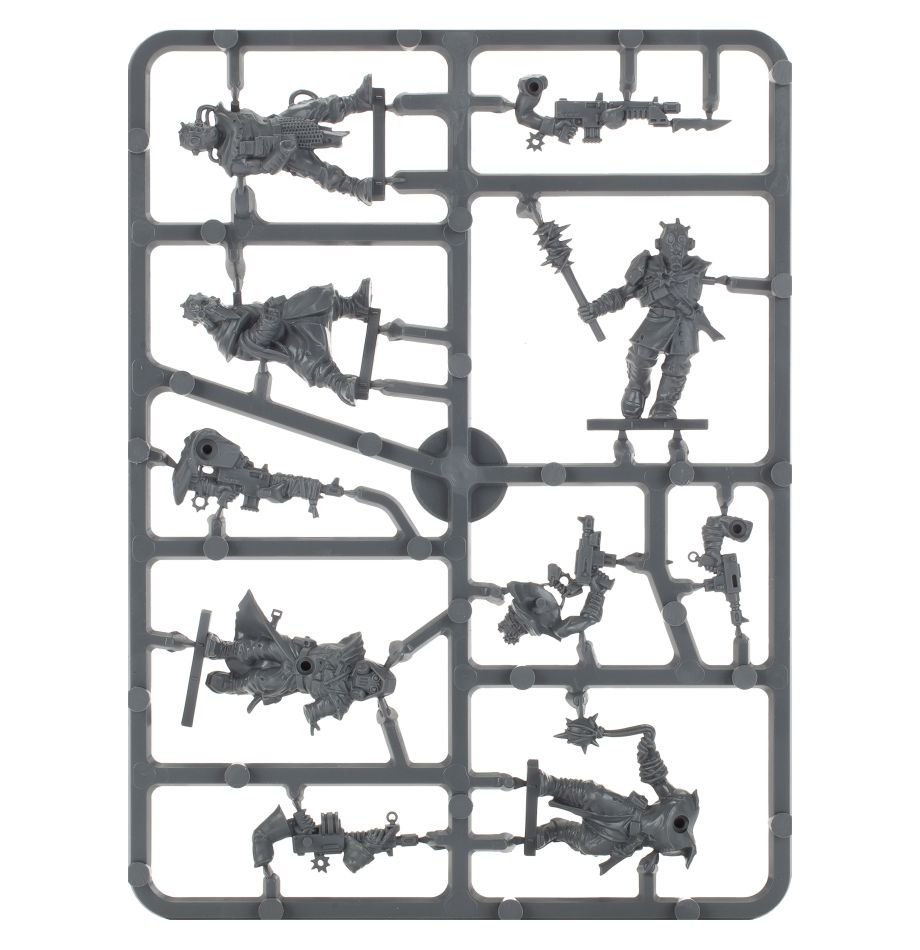 I clipped the right arm off the body and then cut it down until it fit the cowl piece. Both arms were then cut into shape to fit into the "arm holes". It took a bit of work to get it right, but nothing extraordinary. The head was again cut down to fit with the cowl, and that's basically it. The right hand was replaced for the handflamer, and some other bits were added to the belt - done.

Nothing new in terms of models, but I have decided to make this my "general Necromunda Plog". So expect more than just Chaos in here. Or even more Chaos? Time will tell!