129 replies to this topic

This is really amazing... quite envious of our brother legion. Almost tempting me to start a little DA Sideproject.

Good thing they were not cursed by the "we need to get this done quick"-malady.

Those are beautiful and I'm quite jealous

Happy tears. So excited for these, they look absolutely phenomenal. Exactly the style I'd hoped for turned up to ELEVEN BABY!

However can't wait for the special terminator unit in Tartaros to mismatch the preator, of course

however if they break that cycle....

Imagine if the Deathwing models get BOTH Tartaros and Cataphractii :drooll:


Honestly I wouldn't count on there being Deathwing terminator models. FW tend to not do units that have been done by GW (see: People upset about Sanguinary Guard).

That contemptor is a beauty
And that termie praetor is also great, who doesn't love archeotech pistols?

I know I'm biased but HOLY EMPEROR !!!! these praetors and dreads look ace ! will surely get the Terminator one and the contemptor

I recon we may get special flavored termies but probably not deathwing specific. Probably going the route they took regarding the ravenwing (with special gear and rite to represent wings)

Alex's job description lists him as being a Specialist Brands Trainee Plastic Designer; some of the stuff he's designed in his free time can be seen on his ArtStation.

That said, the only other thing I can find with his name attached to it is Roxanna Darknail for Blood Bowl.

Alright, I'm usually not much into either camp of 'It's FW thus it's good' and I'm also not a big fan of the Dark Angels in general...

But this is what I needed for a loyalist release option.  I know some of me mates will be ecstatic, but even I'm blown away by how much I liked these 1st legion boys on first impression.  It feels aesthetically unique without going ridiculously overought: some touches of real trim and different vaulted-armour plating on the levvy, the Connery praetor looks terrific for being surprisingly under-stated but identifiable, and the chain trim and backing on the Catii praetor definitely does it for me.

The complaint I have is petty: I really don't like the melted candles and slightly too big chest armorium on the contemptor.  Those elements feel too 40K (though I love the banded split mail shoulder and hip plating).  There's a line for me where the 40K aesthetic seems to exist as a parody of its own inspiration that rankles me a bit and the melted candles on a crusade era behemoth just happens to be my arbitrary line. I'm also not huge into the rope belt on the sword and board praetor but it blends enough that it doesn't bother me unduly.

I was immensely let down by the FW Blood Angels, but between the White Scars and Dark Angels I'm on board with the direction of the Ist and Vth.

Gonna have to grab that bearded head

mk4 or MK3 from GW and DA heads+ shoulders from FW. Pretty basic, but it would do the job pretty well

"Every world is under Emperors might, then why i feel empty..."

These are absolutely perfect. I haven’t looked at anything 40K for over a year now and nothing 30K for about two years but these few models will bring me right back in. They are exactly what I was hoping. Love them!

Do I spy a DA transfer on that Terminator Praetor’s cloak?! Does that mean FW are going to finally release the long awaited sheets for the Dark Angels and White Scars at some point soon??!!


He has done the Custodes Venetari, the Legion Praevian and Vigilator, Crimson Paladins, Blood Angels contemptor, White Scars terminator praetor, SW Deathsworn. I think a couple of the newer necromunda hanger on models as well. He posts lots about it on facebook.

mk4 or MK3 from GW and DA heads+ shoulders from FW. Pretty basic, but it would do the job pretty well

I mean units besides basic bolter Marines, sense those are no brainer/mandatory to take anyway.

Deathwing termis then. Use the body of the knights and gear them like standard Terminators (if you feel fancy, use the arms of the cataphractii). plasma outriders can be used as black knights (just stick some wings here and there. Maybe a cloak on the sarge ?). Build your Nephilim jetfighter with TL lascannon, and count him as a 30k lightning (that's what I'm doing

). Stick FW doors on the Land raider (you could use the MKII variant from FW, but I've never seen anyone complaining if you play the 40k Land Raider in 30k).
Hope that helps.

Oh nooooo I said that I wasn't going to get anything from forgeworld unless they lowered their prices or if the Dark Angels models are especially spectacular and it looks like I'm going to have to start saving my money, these all look incredible. Excited to see what the other specialist units are and especially what the Lion looks like!

Hot damn,these are real good. And I don't like FW so it means something lol. If they follow up with reasonable rules I'll be quite happy.

I agree about the candles looks too 40k but it's a minor complaint. Very happy that the 40k Angel of Death motif is present in 30k.

Seeing another legion specific Legion levithan really makes me hope they will go back and do one for the other legions that don’t have them likewise with predators for legions like Word Bearers and Death Guard , those Dark angels are such an amazing models

Nice. I'm not really sure I like the direction they went being models for 30K and not 40K though. I see too much of a tie in to the 40K line.
Maybe it has to do with where they are from in the timeline though? I just think there is too much of a modern 40K ascetic. I prefer my First Legion to be less decorative.

Also, and maybe I just can't tell, does this model have a pistol grip or not? 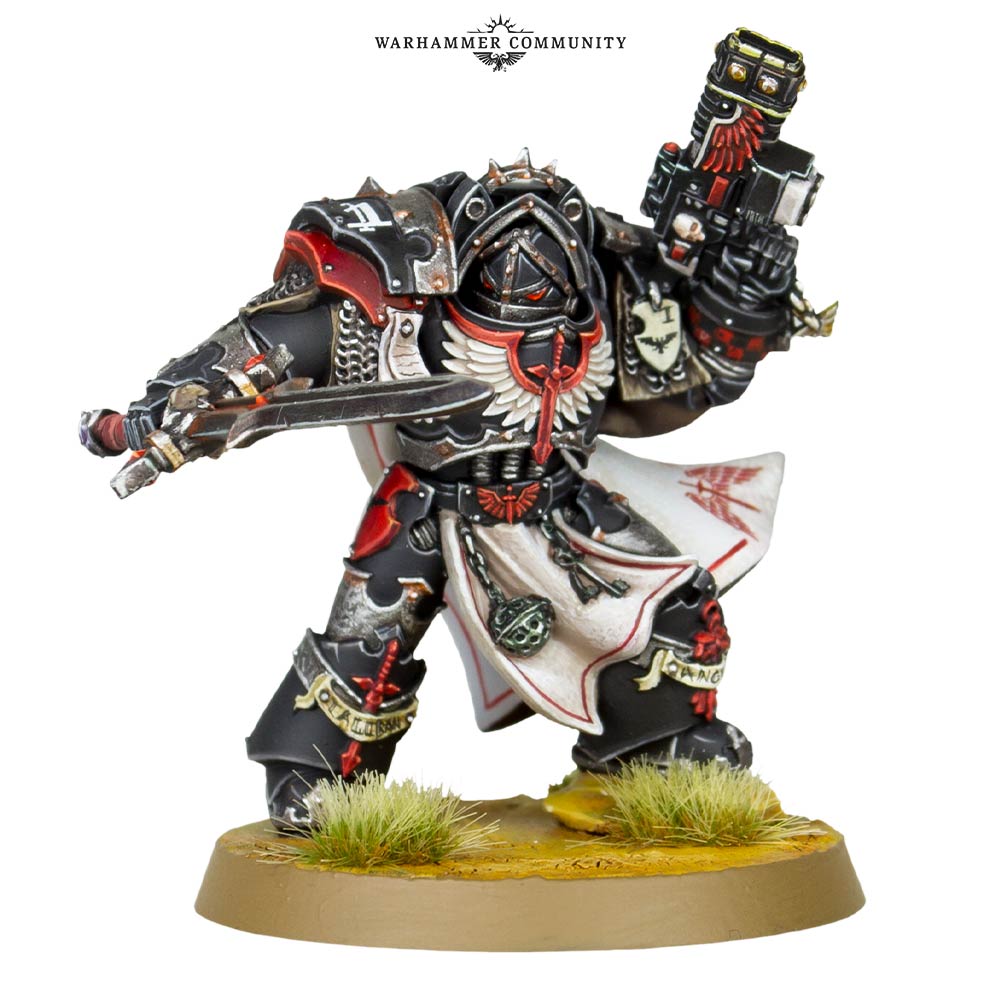 I think it’s partly the GW style paint job.
I strongly dislike the new FW painting schemes, leave the line highlights and all that for 40k.
I want my black with some contrast dammit, not like he has some raving grey and white highlights.
Was great in the 90s but personally hate that style.
Where’s the ‘contrast’?

Fantastic models. Makes the wait almost worth it. I had committed to a Ultramarine 30k army but now I’m happy I have built DA Mk3 and
Cataphractii lying around. Day one purchase for sure!

Anyone know if they gave an update on Book 9 release date?

Last update was they were quite far along. I know everyone is counting on a HH Weekender 2020 release, but maybe they actually gave some info?

Do I spy a DA transfer on that Terminator Praetor’s cloak?! Does that mean FW are going to finally release the long awaited sheets for the Dark Angels and White Scars at some point soon??!!

Also some symbols on the dreads. I'm just dying to get DA decals - and since they show some of the stuff on the models, I presume transfer sheet is ready.