Only The Fallen Can Rise In Truth

Life is a series of struggles – if you fall, you get up again.

Accept your flaws – only then you can overcome them.

Only The Fallen Can Rise In Truth

In this project log I want to document a force of Fallen I will do over the coming weeks and months. Maybe years? It is meant as a side project to my many other Chaos forces, and is not focussed on gameplay effectiveness, but variety in modelling. Each model will get a name and its personal backstory – so expect some depth when it comes to their background.

This Plog will contain WIP pictures as well as completed models, and I appreciate any and all comments and questions. The second post will contain links to different parts of the project for easy reference.

The main goal is: getting models painted and on the tabletop in a reasonable time. To me this means that I will go for „tabletop ready“, instead of spending hours and hours on every single model. I am a perfectionist at heart, but this has lead to little results in the past. More often than not I got demotivated over the process of painting something, and never finished it. This time I want to purposely shoot for „mediocre painting“, to actually get stuff done.

The first intermediate results should stand at the end of this years ETL. I want to have a Vanguard Detachment of Fallen ready to game at the end of August. It will consist of Cypher, a Sorcerer and about 30 Fallen, plus a couple of Rhino transport tanks. If you are not familiar with the details of Codex: CSM, this means using a special detachment from „Vigilus Ablaze“. Being a Vanguard Detachment also means that this will hardly be an „army“ yet, but a starting point.

This first detachment should give me something to either field on its own for smaller games, as part of a larger Chaos force of my own, or as something I can bring to larger games in stores or hobby clubs – Apocalypse says hello!

Afterwards I will expand the concept into a full CSM army. There are some ideas for this already around, but the details will get worked out later down the road.

What I will do – and what not

As mentioned already, I want to keep the painting at a level that could be called „tabletop ready“. I will not aim for high-level results on anything other than (maybe) the characters.

This approach does not include the building side of things though, so I will spend some time making each model an individual in some way or another. The first part of the force is supposed to represent Fallen in an early stage of corruption. So there will be no Chaosstars, no overly spikyness, no open mutations and the like. There will be no imperial eagles either though. The general idea is: they should look like loyal Dark Angels at first sight, but with clues to their true allegiance obvious for anybody who knows where to look for them...

While I am aiming for a gameplay legal force, I have no interest in „competetive gaming“. So effectiveness on the battlefield will never be a major concern. I am fully aware that almost everthing that can be done with Fallen can be done better with Chosen – but for this project I simply do not care.

Concerning the background there are some gaps in my knowledge I hope to close soon. I know the general Dark Angels background since the 2nd edition „Angels of Death“ codex, and not a lot has changed regarding the Fallen. There are some bits I missed out on in „Gathering Storm“ though, and I have to read through stuff like „Fallen Angels“ and „Black Legion“ for more – both novels are ordered already, so... soon™.

However, I will not follow any of the official background slavishly. If there are things I deem fit to ignore to better represent my own ideas - I will happily do so.

This post will contain a reference to noteworthy posts later on. For now it is a placeholder.

This whole affair started about a week ago, when this topic got me inspired in regards to doing some Fallen of my own. Long story short, now I want a whole army of them, and ETL is the perfect opportunity to get it kickstarted!

I have been building like crazy over the last few days, and the first results can be seen below. As I mentioned in the outline above, each model will get a name and a backstory - just not now. Some ideas you can read about already, but details will only follow once they are done.

There is a first character, one squad of ten Fallen and their ride, and another unit champion built so far: 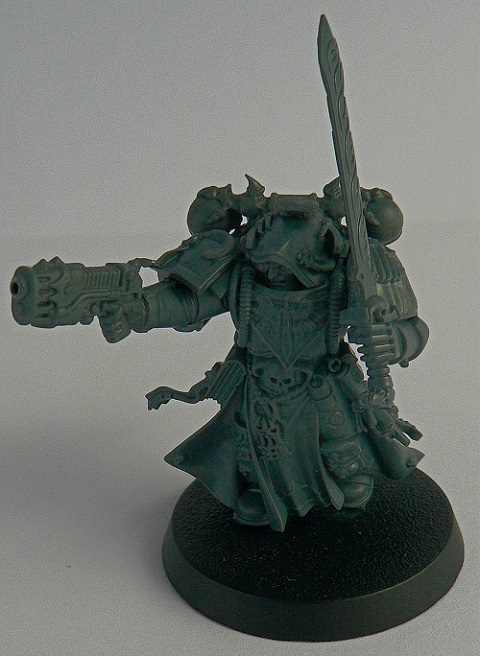 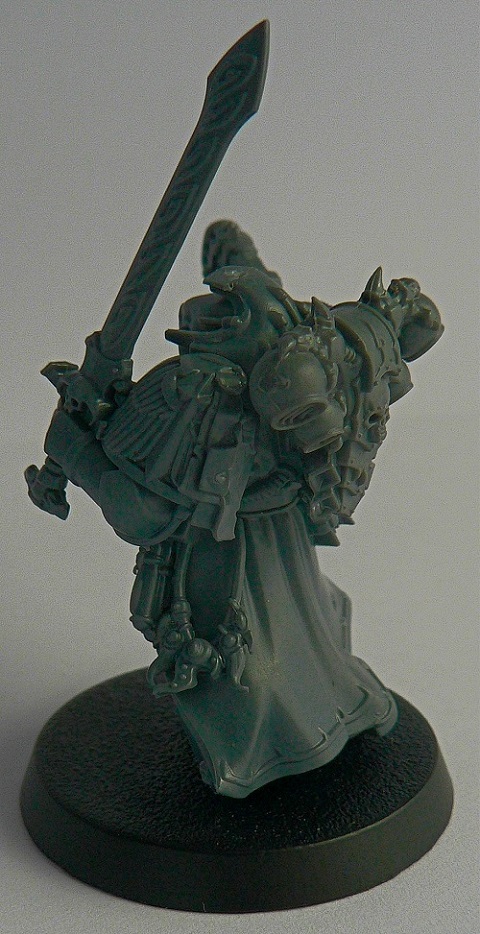 The basic model coming from the "Dark Vengeance" box, this one is an easy conversion. It follows my approach of "looks like a loyal Imperial dude at first sight" - but note the oddly shaped backpack and the rather non-imperial trinkets on his belt. I am not perfectly happy with him, but he will be the de-facto leader of this warband for the time being.

From left to right: melta gunner, unit champion, the "second in command".

Again, nothing major. The bitz come from all over the place though, with Mk.IV Marines, the DA Veteran Squad, old and new basic CSM kits and even the Chaos Terminator Lord gifting parts. Some very minor sculpting on the champions legs and some damage repair on Mr. Pointyfinger - he had a thunderhammer at first, but I did not like the look in the end, but removing the arm put a sizable hole into his torso...

Three squad members with a pair of lightning claws each. The claws come from the SM Vanguard Veterans, the left shoulderpads (and one head) are from Khorne Berserkers, one head is from the Chaos Terminator Lord, the last one from the new CSM kit, each has some DA Veteran part, and the rest is basic Mk.IV Marines.

The rest of the squad, armed with bolt pistols and chainswords (from the old basic CSM kit). Identical DA shoulder pads are supposed to mark them as a group with some sort of bound, and the second-in-command is meant to be their leader. I know that Fallen can not "combat squad" like their loyal brethren, but in terms of background they still would. And by just using two units of five - which I can easily do with this build of ten - I have that option anyway. 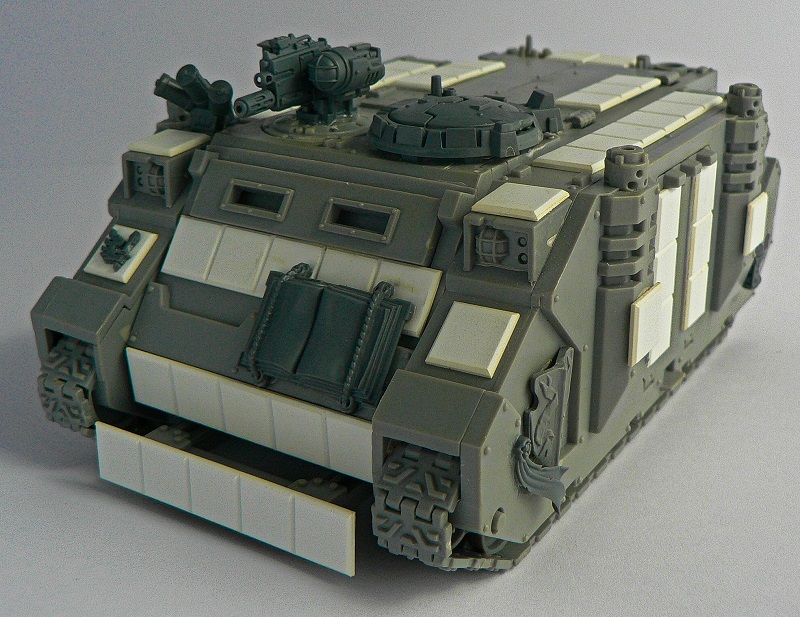 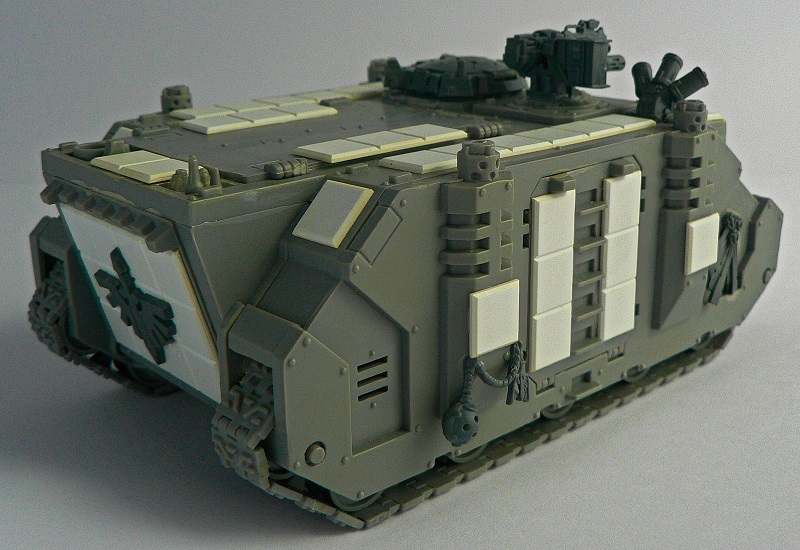 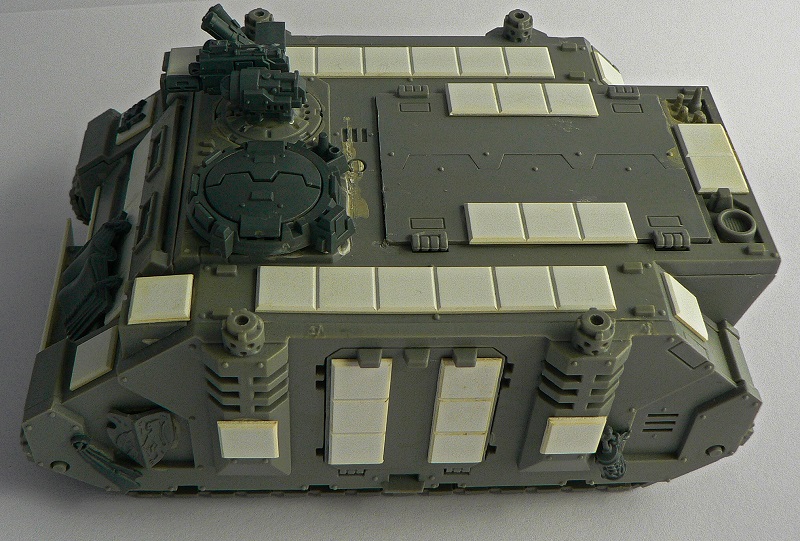 The units ride, and the one model of this army with the longest story. This one started as a Vindicator for a "counts-as Space Marines" Squat army some time in the early 2000s. With an old metal Dwarf steam cannon as the main gun on top of it! Back then vehicles could get additional armour plating, which is what the white plasticard is supposed to be. Some heavy cutting and re-decorating made it into the model you can see now - with some of the damage in the process still visible.

I have yet to decide on names for all other models, but this one already has its: "Old Faithful".

Nice start for the Fallen here. I might steal that idea on the Rhino though. The extra armour made from plasticard could be an easy way to do the checkerboard pattern on vehicles, which is good for my First Legion Dark Angels.....

Some progress has been made, the first half of the second squad is built:

There has also been a delivery of scripture, plus some reinforcements! 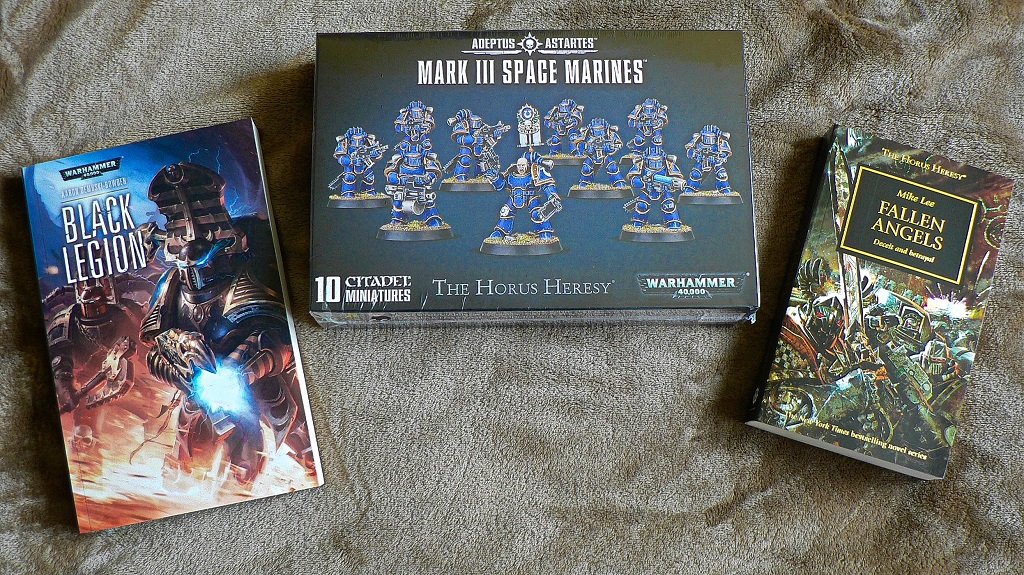 So ETL VII has started, and the Fallen are part of my first vow: 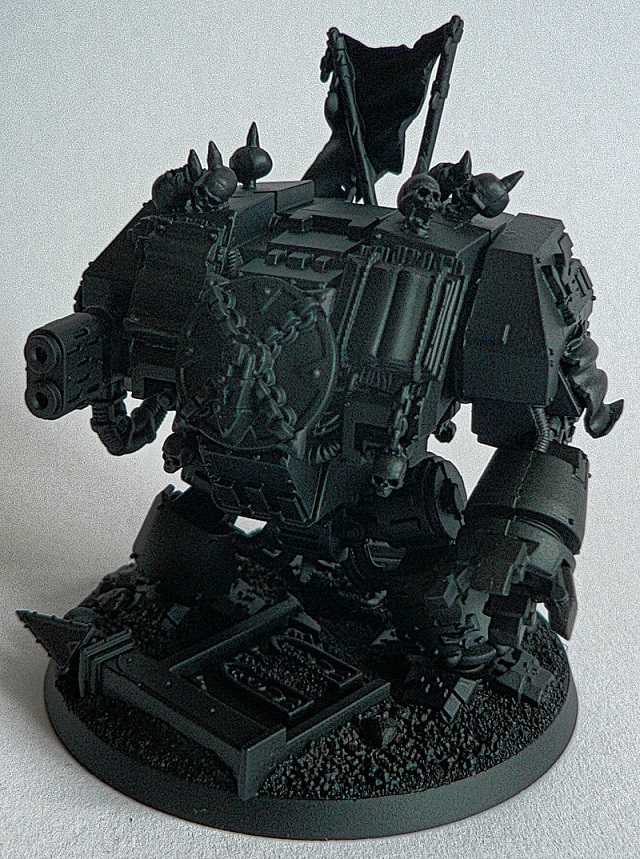 The "Helbrute" is an ooold covnersion based on the Dreadnought from the "Assault on Black Reach" starterset from yesteryear. Originally intended to be used for Waord Bearers, I think he would fit perfectly in a Fallen-themed CSM army. Only a single DA icon was added to the previous conversion.

I also got myself a Codex: DA last week, because... know your enemy and all that, right? 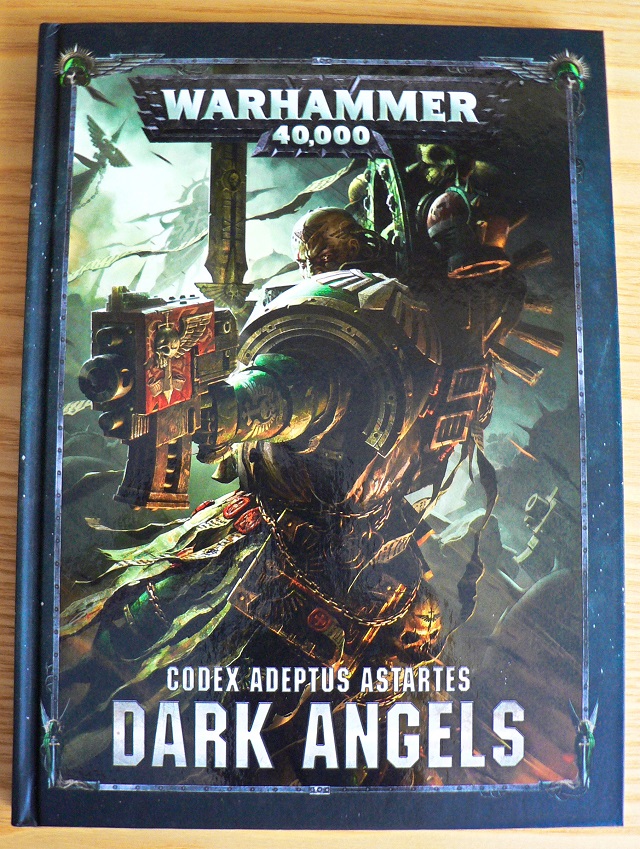 Progress after one week:

On the Fallen, the red parts are done: 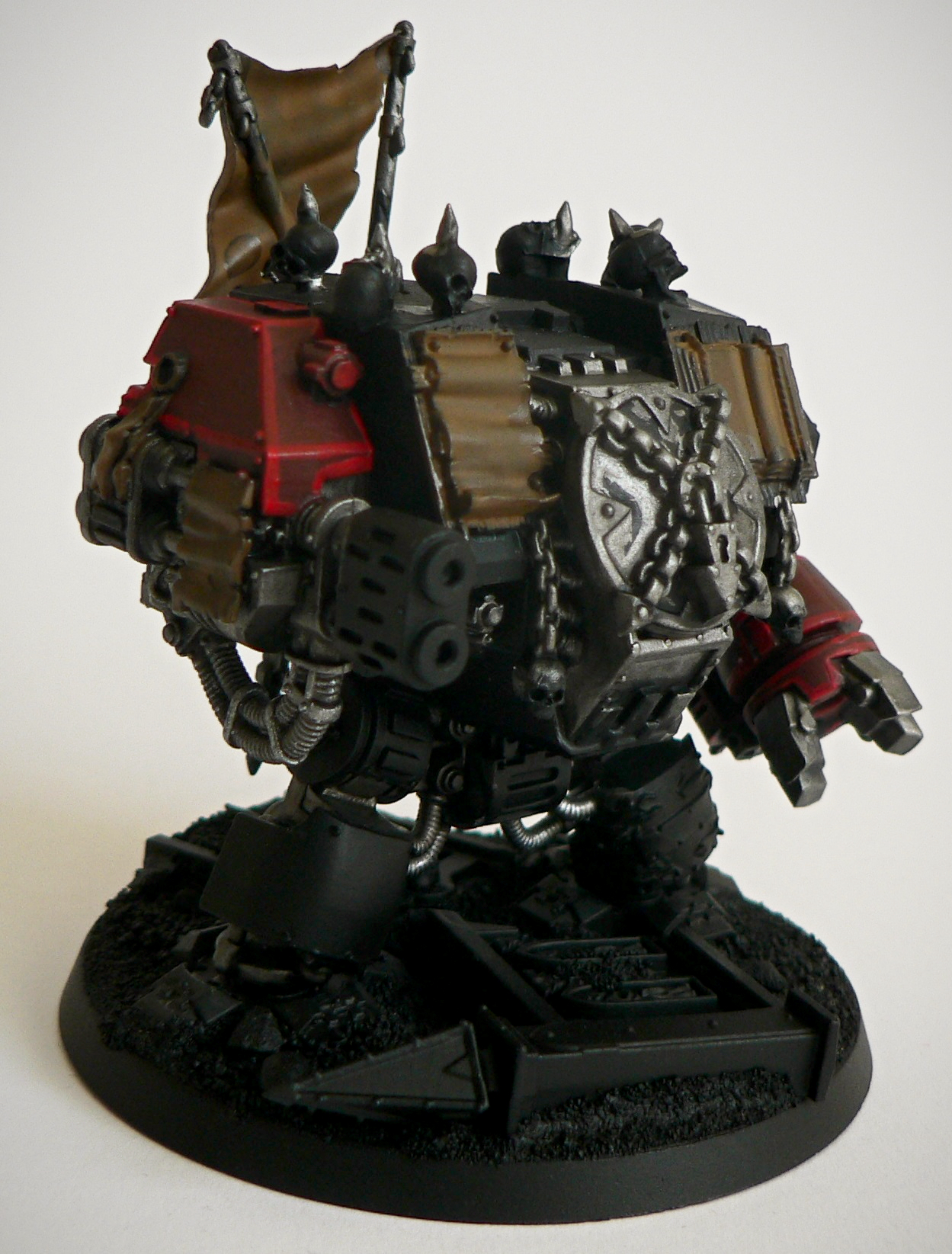 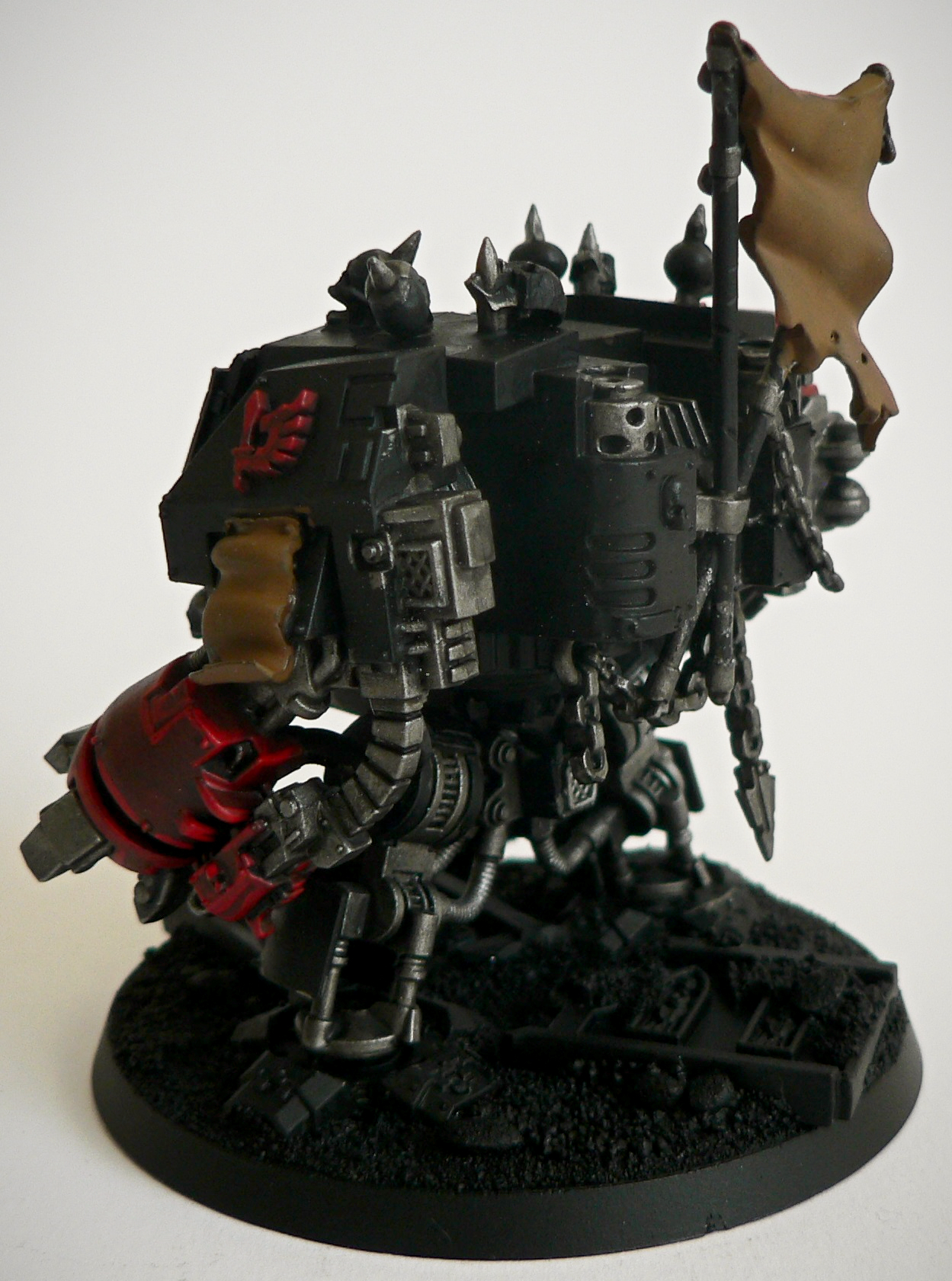 Building more Fallen has seen some progress as well... 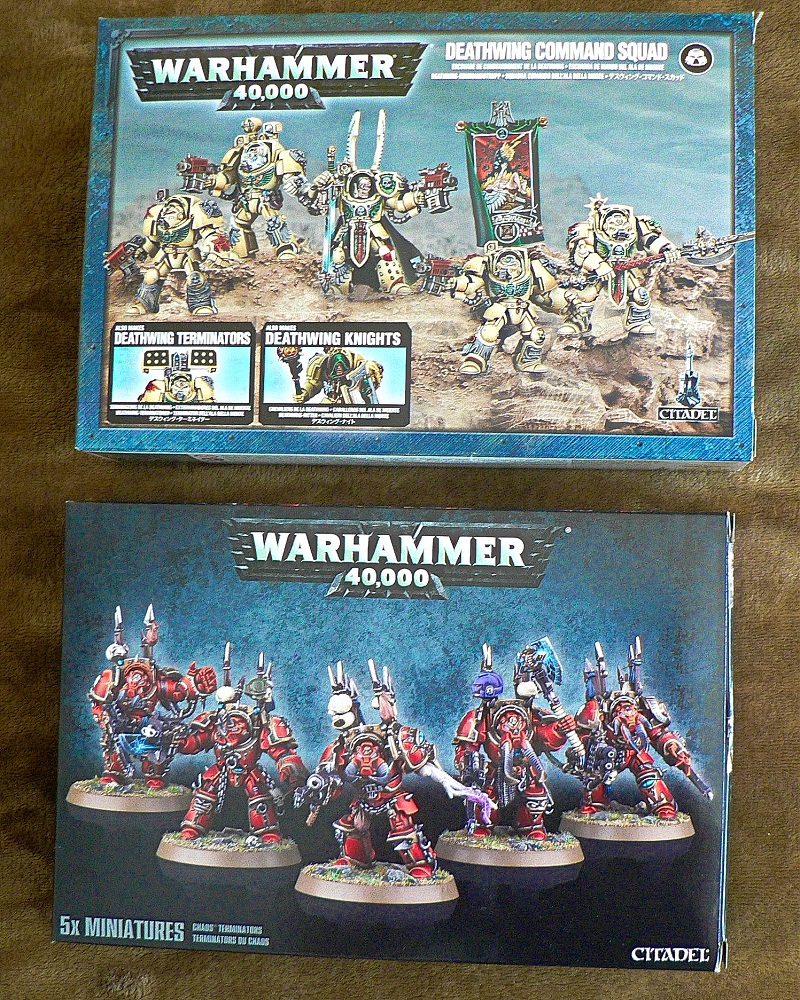 I have been thinking a lot about what units from the CSM list would be appropriate for an army of Fallen. Some obviously need more work than others. For example: what would be a fitting Chaos Spawn, other than an obviously mutated Dark Angel?

This is what I came up with: 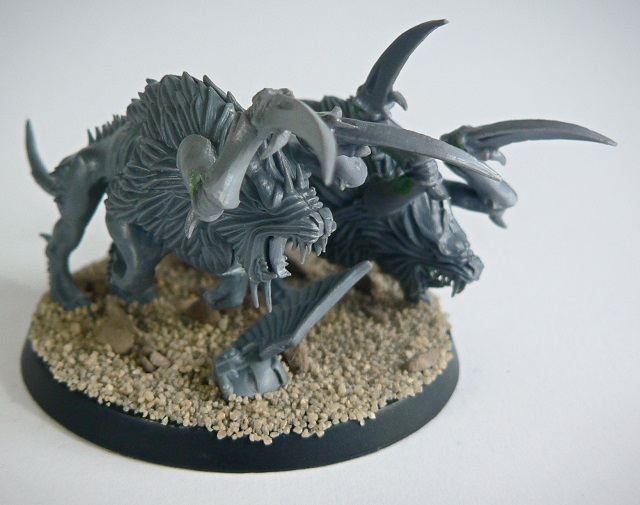 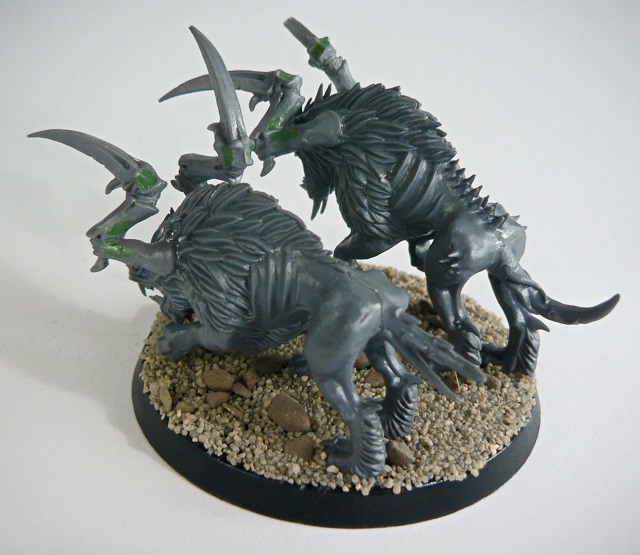 These will be painted in "ghostly" colours, and are meant to represent the spirits of teh Calibanite beasts, summoned by the Fallen to fight along their side - a memory of their lost world, spite and wrath manifest. I have the parts for another four of these - i.e. two per base, or ten converted Chaoshounds - and hope to get this first "one" painted inbetween ETL stuff... soon™.

I like the Calibanite beast spirits and the concept behind them, but how will you implement them in-game? As you have two models on one base, do they have 8th Edition Vehicle-like rules, by which their number of Attacks decrease along with their Wounds? (If one spirit is exorcised from the material plane, I doubt it'll launch any more attacks on a target still in this plane.)

I like the Calibanite beast spirits and the concept behind them, but how will you implement them in-game? As you have two models on one base, do they have 8th Edition Vehicle-like rules, by which their number of Attacks decrease along with their Wounds? (If one spirit is exorcised from the material plane, I doubt it'll launch any more attacks on a target still in this plane.)

It will be counted as a regular Chaos Spawn, nothing fancy.

The first model is done in terms of "pure painting": 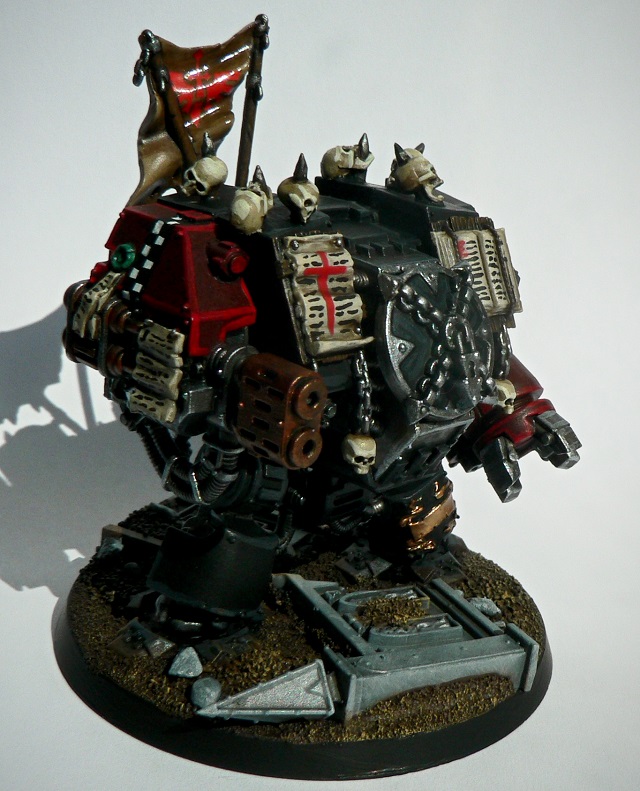 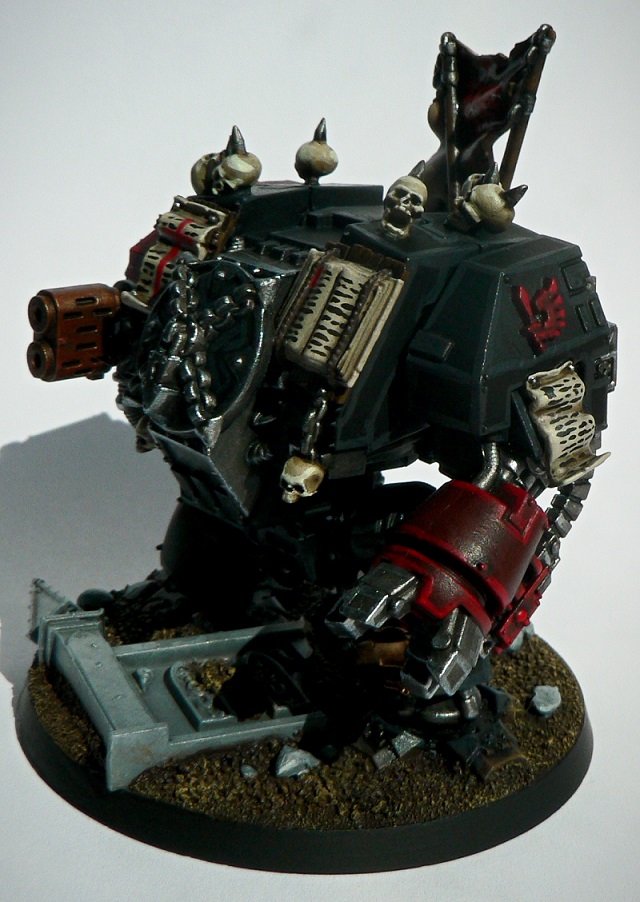 The shine on the banner comes from gloss varnish and a decal, after proper varnishing the whole model it won't be noticable. I will add a bit of static grass to the base, but other than that this "Helbrute" is done.

Using the Deathwing decal was a last-minute idea. The broken sword in the Dark Angels icon is quite fitting for Fallen in my opinion!

In other news I pre-ordered the Apocalypse CSM Batallion. With two sets of "Shadowspear" and another box of CSM already in my hands, this will double my body count of the new CSM sculpts to 60 - I won't need any more for a while I guess!

With my first ETL vow done, so are the Fallen Librarian (i.e. a "Sorcerer") and five Fallen:

Excellent work on the Fallen.

I love your Fallen army. Could you give me advice on how to start one?

Really nice work on the Fallen, I really dig the way you painted the claws.

Also tagged with one or more of these keywords: Fallen, ETL, Army Building