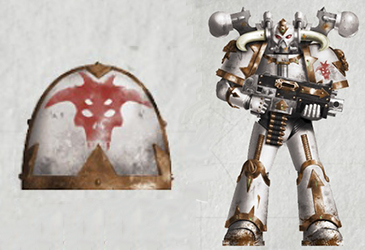 Fierce alien hunters prized by the Deathwatch and famed in song across the Imperium's outermost planets, the ivory-armoured Sentinels once roamed the borders of human space. The Chapter maintained no homeworld, but swept through space aboard a trio of Battle Barges, taking recruits from those savages stout enough to endure their victory feasts. Trophies taken from exotic alien species were prized among battle-brothers, and decorated the armour of elite warriors. When the Warp Storm Dionys engulfed dozens of star systems, only sheer bad luck saw the nomadic Chapter caught in its chaotic wake. At first, the Sentinels outright ignored the call to be judged for mutation – it took overt threats from the infamously purist and equally mobile Red Scorpions to bring the Chapter to heel. This insolence would reflect poorly on the Sentinels when gene-seed inspection revealed a hyperactive omophagea – leaving them no choice but to accept a doomed, penitent invasion of the Eye of Terror.

Masters of the spaceborne hunt, the Sentinels easily evaded the heretic fleets that scattered the Abyssal Crusade to make planetfall on the daemon world of Oliensis. Initial auspex scans revealed the planet's organic crust, and soon they had fully mapped its true form – a morbidly obese humanoid, curled into a foetal ball. Undaunted and proud, the Sentinels elected to begin the hunt regardless. The goat-headed hedonists who inhabited Oliensis were no match for the Chapter's swift assault and deadly ambush. Nor were the gaudily-painted Noise Marines who came to their aid, adding the screech of sonic weaponry to the mad bleats of Slaaneshi revelry. The hunt raged between tree-trunk bristles, across rivers of drool, and into cave-like pores, and with each conquest the Sentinels feasted anew. As supplies ran low, these celebrations were supplemented by the meat of flesh-cultists and horned tumour-spawn, growing louder and fiercer and crueler without end.

By the time the Sentinels claimed victory over Oliensis, the horned pagans who had survived their hunt worshipped the Astartes as hungry gods. Chaplain Cuhullin, whose milk-white armour now twitched with thin red veins, welcomed all to the final feast. At his words, the planet itself stirred. The ground split and broke into a canyon maw beneath the Chapter, swallowing every warrior and vehicle whole. It took weeks for the survivors to gnaw their way free with chainsword and fang, but those who had tasted the daemon world's gory mantle found it an ambrosia beyond any victory they had ever known. Reborn and renamed, the Corpus Brethren retain their old aptitude for lightning assaults and desire for exotic trophies. What drives them now is hunger, an insatiable gluttony that has seen them butcher a Tyranid bio-titan, rampage across multiple systems in pursuit of a shipment of ajidamal spice, and round up the noble class of an entire Hive World into pens for slaughter. Accompanied by Chaos Spawn hunting hounds, horn-headed cultists, and trumpeting Noise Marines, the Corpus Brethren inspire primal dread in the very worlds they once kept safe.

Insatiable Hunters
The slavering brethren of Oliensis move in for the kill with frightening speed, surrounding those who thought themselves safe and butchering them piece by piece.

First to Feast
The leaders of the Corpus Brethren take pride in their palate, and dart through lines of fire with animal speed to sample the choicest cuts.

Stalk the Prey (2 CP)
The Sentinels once chased monstrous aliens from the borders of Imperial space, and hunger has only honed their skill at corralling prey.

Slight tweaks to the backstory of the Corpus Brethren – trying to give them a bit more agency in their fall, and emphasizing the hunger/consumption aspect to give them a unique Slaaneshi gimmick. In mechanical terms, I eschewed actually representing that consumption stuff for lack of space; Feeder Tendrils or Hyper-Evolution would have been fun, but I needed to get across the speed and savage hunting skill of the Corpus Brethren. I also wanted to actually encourage the Corpus Brethren to be Slaaneshi, without resorting to the "must be SLAANESH" stuff found in the errata for Vigilus Ablaze – pretty difficult when the primary benefit of being Slaaneshi is a boost against Imperial armies (yay?) and extra Shooting (not really appropriate).

The Renegade Trait is more-or-less a clone of the Evil Sunz, but with a Slaanesh restriction on falling-back-and-charging. You get a boost to pile in/consolidate, but your +2 Movement boost applies only to Possessed, not "basically every vehicle" like it does for Evil Sunz.

The Warlord Trait is a straightforward Raven Guard-style no-Overwatch, allowing you to rush your Chaos Lord or Daemon Prince into combat and have your hungry hordes follow behind unimpeded.

The Stratagem is the inverse of a Harlequins Stratagem (Cegorach's Jest), allowing you to punish enemies who attempt to fall back. Honestly, I feel like this ought to be a standard rule for Falling Back, albeit with an Overwatch-style "hit on 6s" limit. In the meantime, this means that when you get into close combat, it's painful for the enemy to get out. Originally it just let you charge them again, but I feel like this lets your opponent actually get what they want (falling back) with a penalty, rather than just denying them the opportunity to flee. I was tempted to add something about applying Death to the False Emperor to that unit for the rest of the battle, to encourage Slaaneshi marks rather than brute-forcing it, but it's already complex enough and that feels like I'd be edging into a higher CP cost.

Finally, the Artefact of Chaos supports that lone wolf no-Overwatch charge your Warlord is good for, by letting him heal himself with kills. It's broadly balanced against the Parasite's Kiss (+1 attack, +2AP, +1D, vs 1 shot on the charge and D3 damage) and is also available to Dark Apostles (because why not).

I especially like the idea of Slaaneshi stuff that's NOT the usual "hookers and blow" as it usually ends up in the fandom. Gluttony is a PERFECT excess for Slaanesh, because it's such a simple and easy one to fall into.

I especially like the idea of Slaaneshi stuff that's NOT the usual "hookers and blow" as it usually ends up in the fandom. Gluttony is a PERFECT excess for Slaanesh, because it's such a simple and easy one to fall into.

As with Dragon Warriors and Grey Death, I wanted to show off a different angle to the "main" Cult Legions. With the exception of The Purge, the god-aligned Renegade Chapters in Vigilus Ablaze were uncomfortably similar to the god-aligned Cult Legions. The Flawless Host and The Scourged are fun, but while obsession with perfection, obsession with forbidden knowledge, and mindless screaming bloodlust might be the primary faces of Slaanesh, Tzeentch, and Khorne, they don't need to be every face.
Mechanically speaking, my main concern is the Renegade Trait. It's basically just the Evil Sunz Kultur, sure, but it's also a complete upgrade to the White Scars Chapter Tactic... which is a pretty bad tactic, but also directly comparable, and therefore likely to annoy people.