Deathwatch of the Kharaa System

I figured I would start this thread to track my work on my Deathwatch army.

Although my primary army is guard, the release of the veteran kit got me interested in starting a Deathwatch army.

Here is my army as it stands, a ton of models, though many are not finished.

Edit 9/11: changed the army picture since most of the models in the original have been torn apart the make way for the the new ones.

Here is my favorite model so far 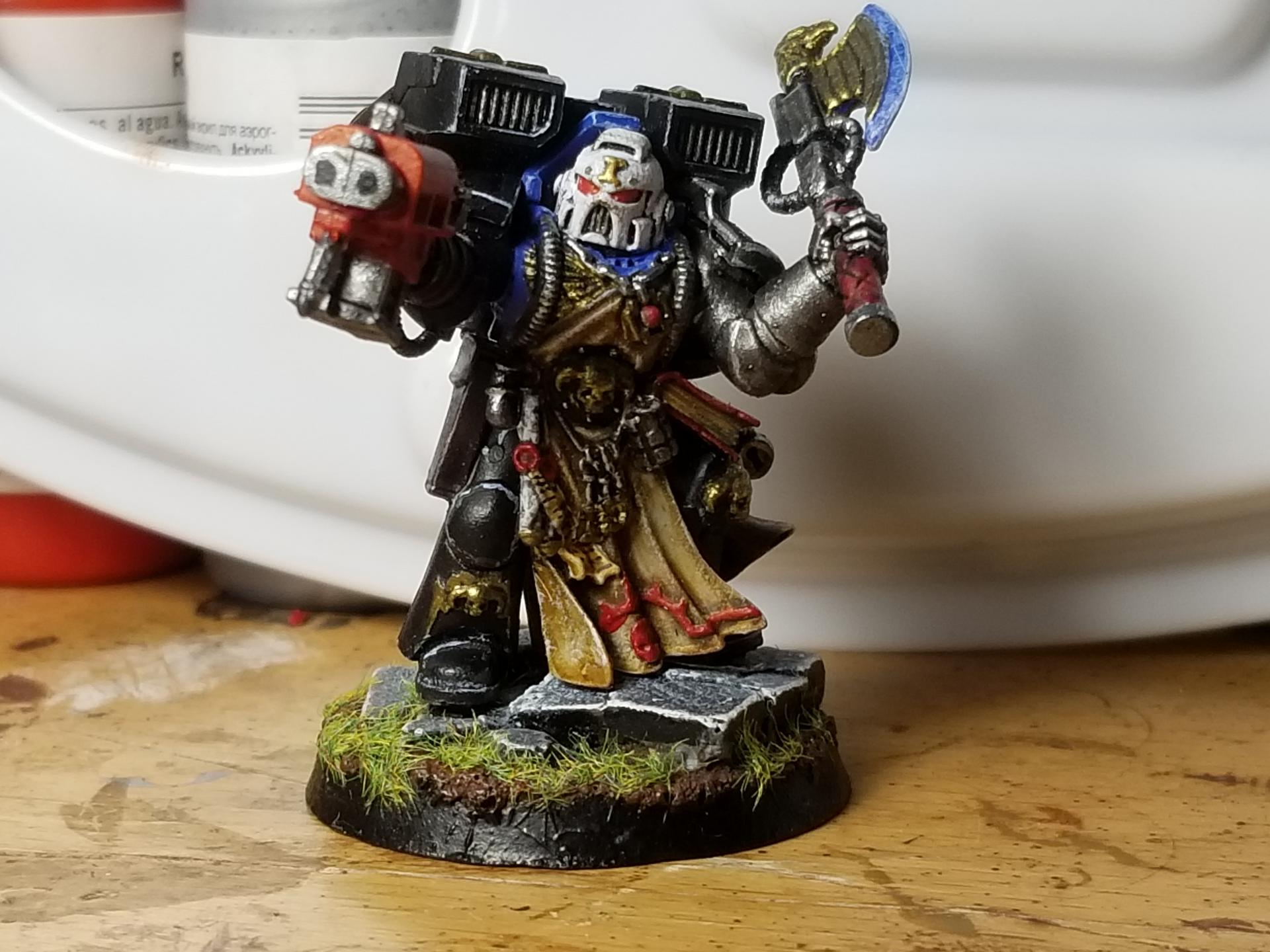 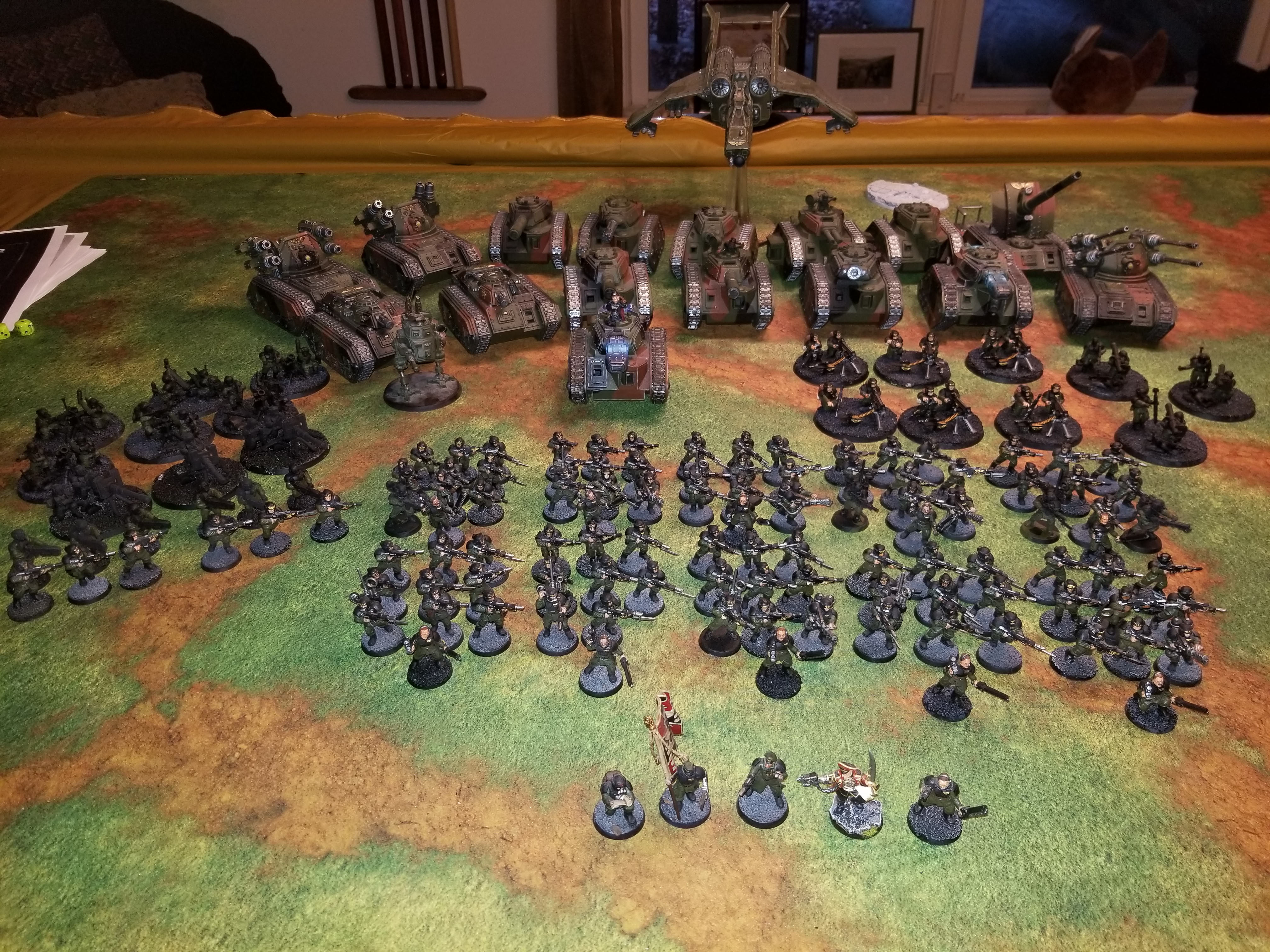 Next two pictures are not my work. These model were done by den of Imagination.  While most of what I post in this thread will be my work,  I do have outstanding orders with DOI, some of which will get posted in this thread.

This is a picture of the well painted guard army backing them up. 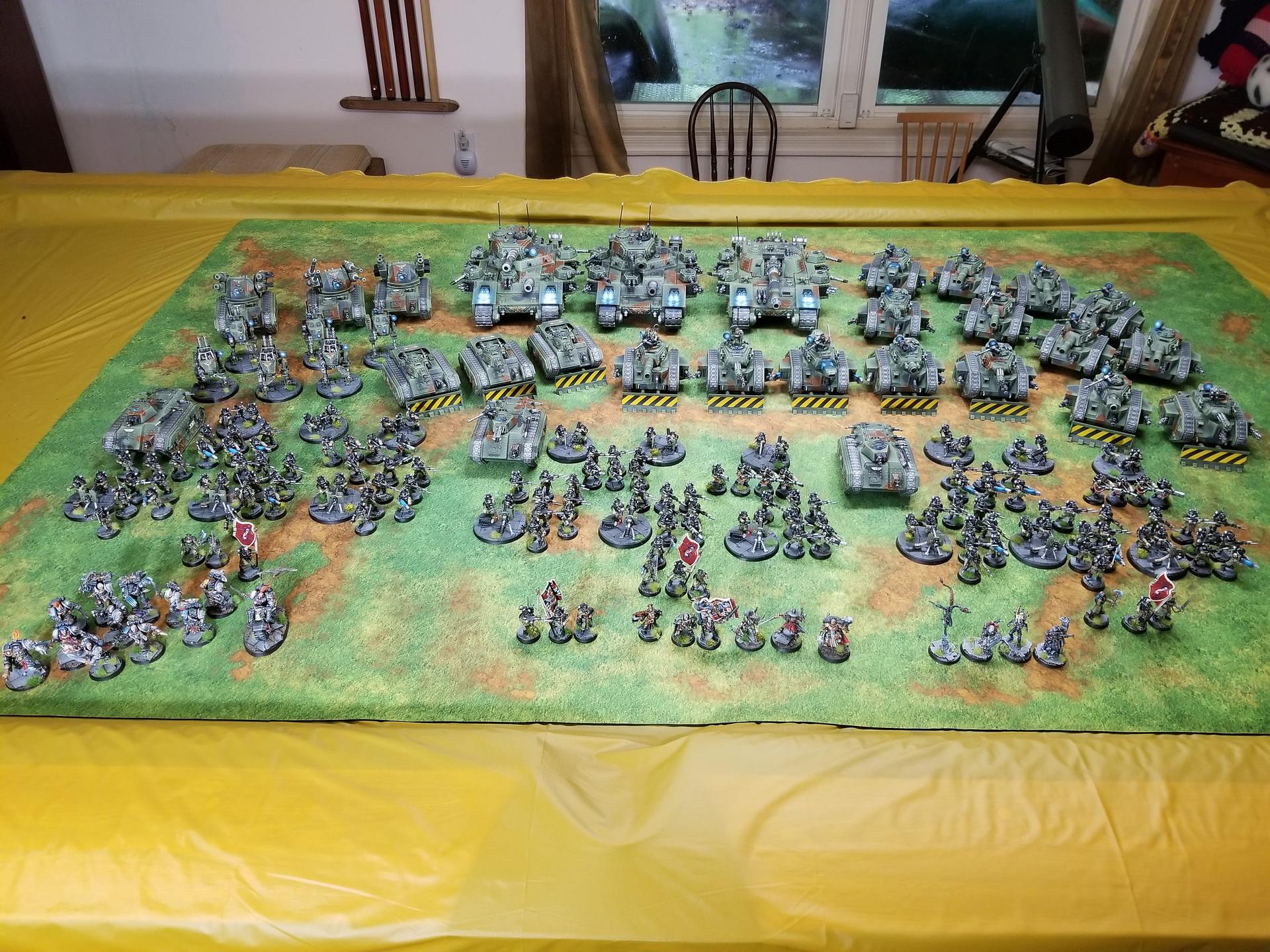 You can find more picture of my guard in my signature

And here is Kill team Cassius 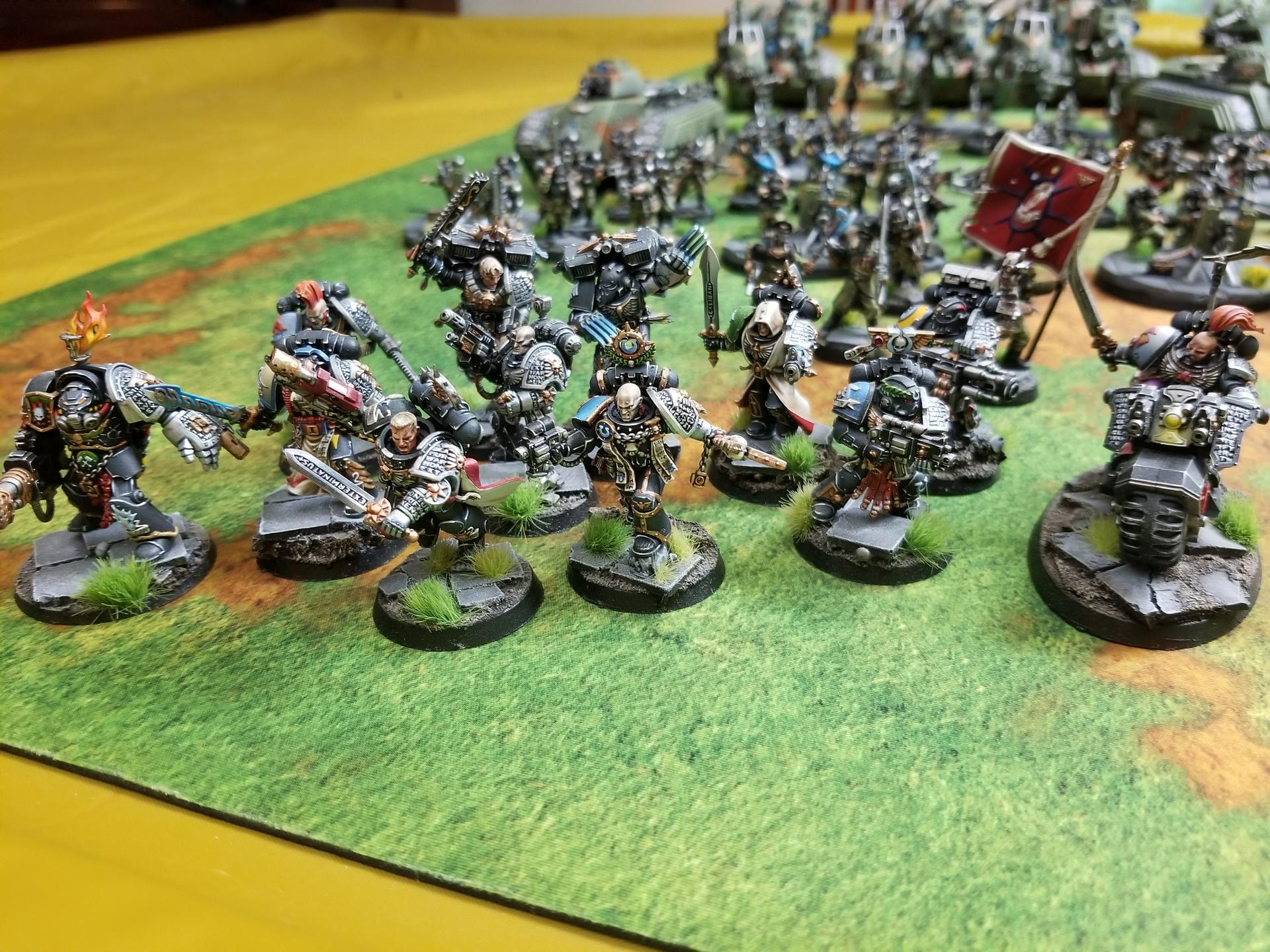 This next section is what I'm currently working on.

If you look closely at the army picture, there are no Primaris Marines.  The customization of the Veterans is what brought into the Deathwatch in the first place and I was not a fan with how GW handled the the introduction of Primaris units.  That being said, I think that Primaris will eventually replace normal marines and I've started the long process of preparing my Veterans for the future and if Primaris marine were to eventually get access to veteran weapons, all the better for me.

In this project I am combining the Reiver kit with the Veteran kit.  Rules wise, they are still Veterans.  For the first batch I have made some marine to be used more the kill team game which has more loadout restrictions.  So no storm bolters or breachers yet.  Pretty much every part went on really well. 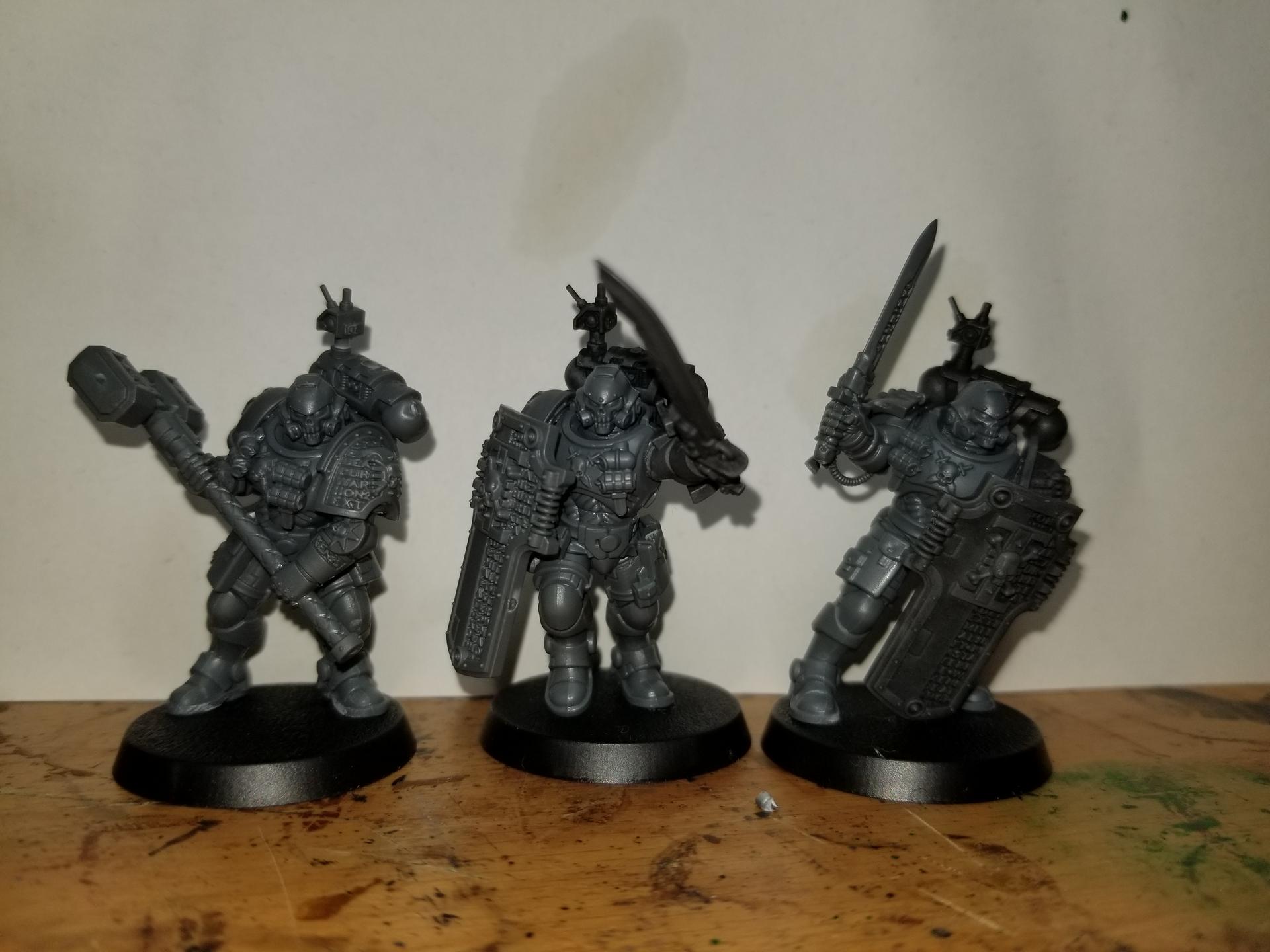 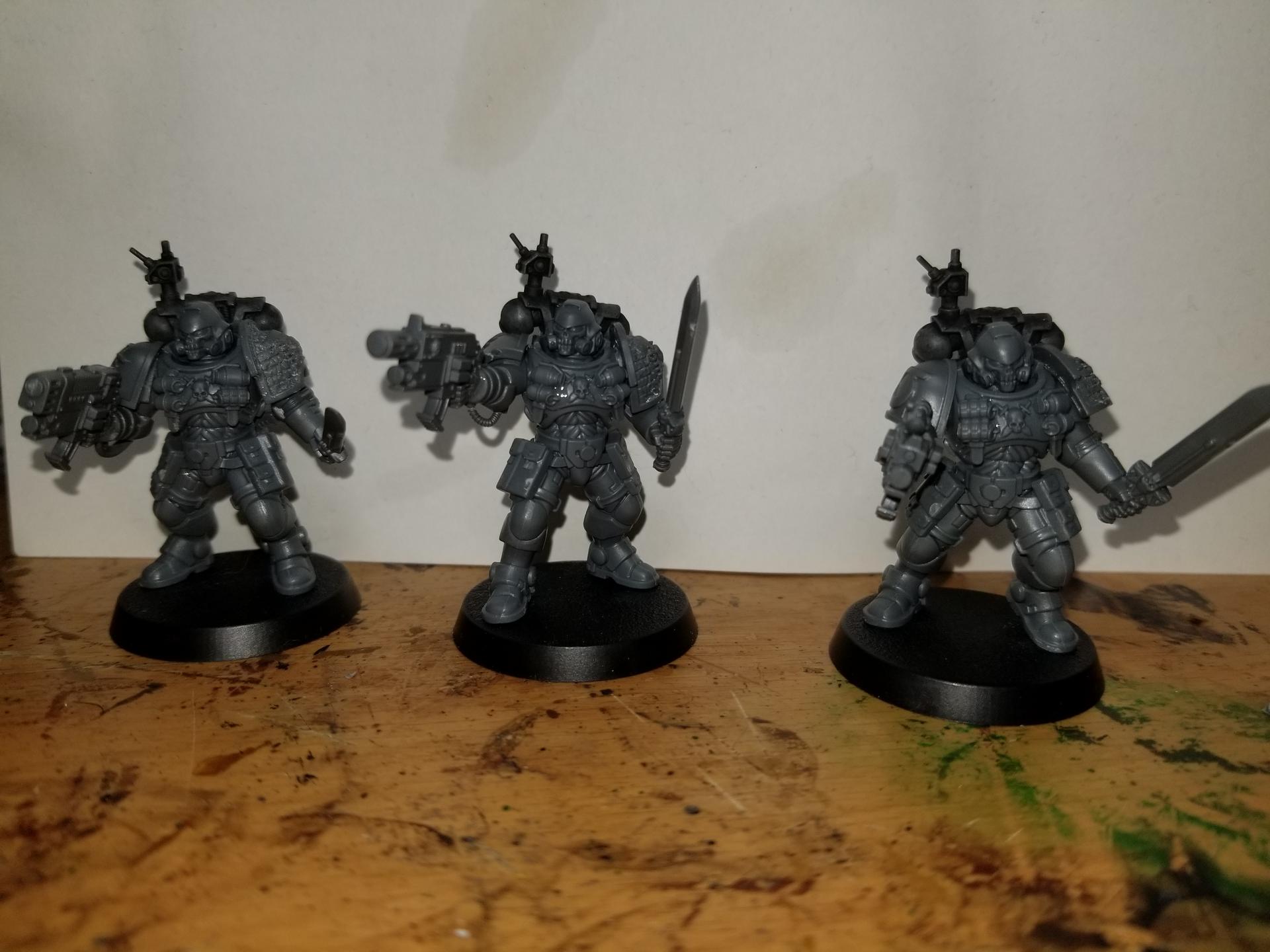 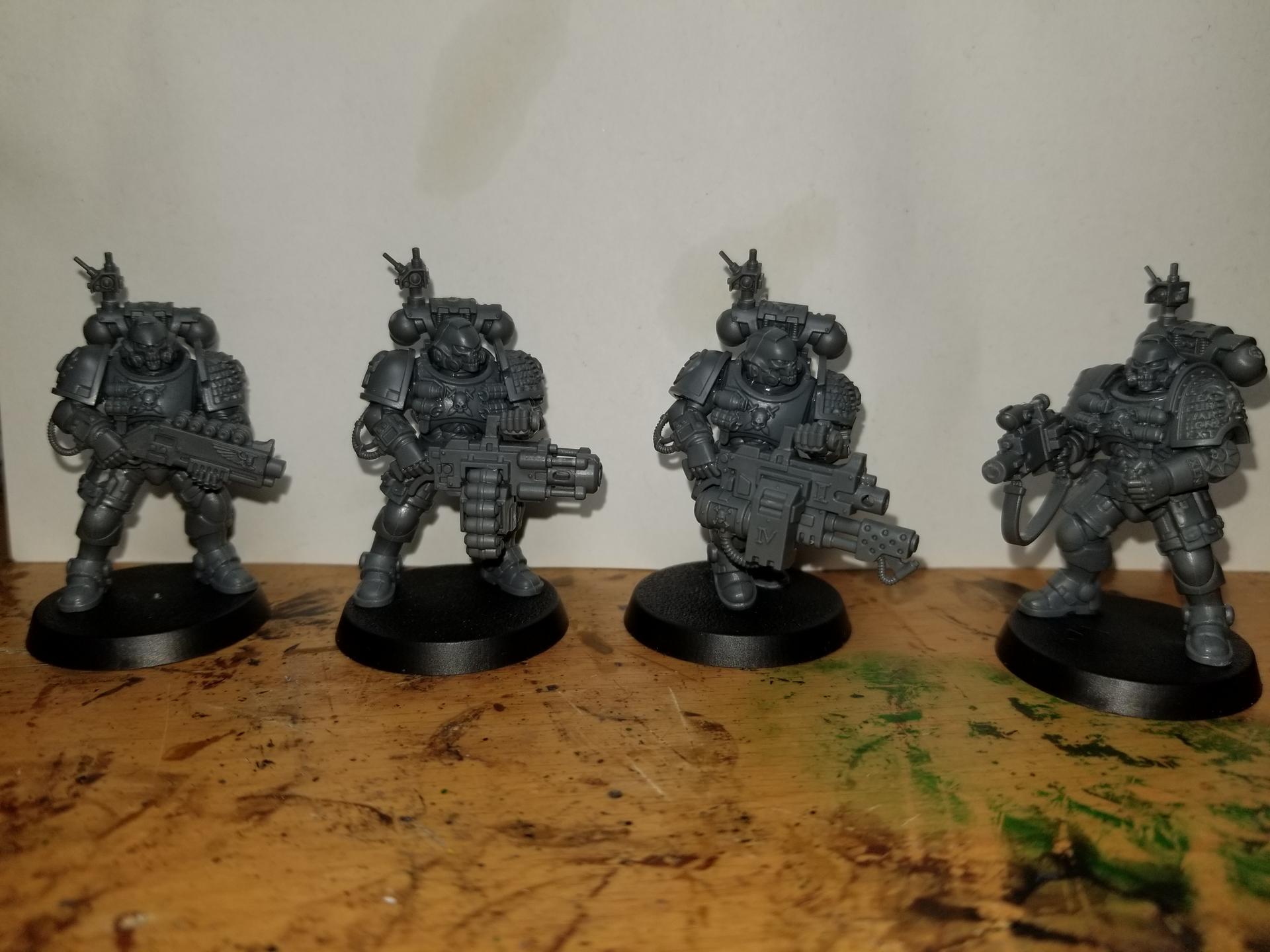 Here is a Vanguard Veteran conversion I made.  with the recent buff to hand flamers in the faq (d3 -> d6 shots) he should be a worthy inclusion to any veteran squad. 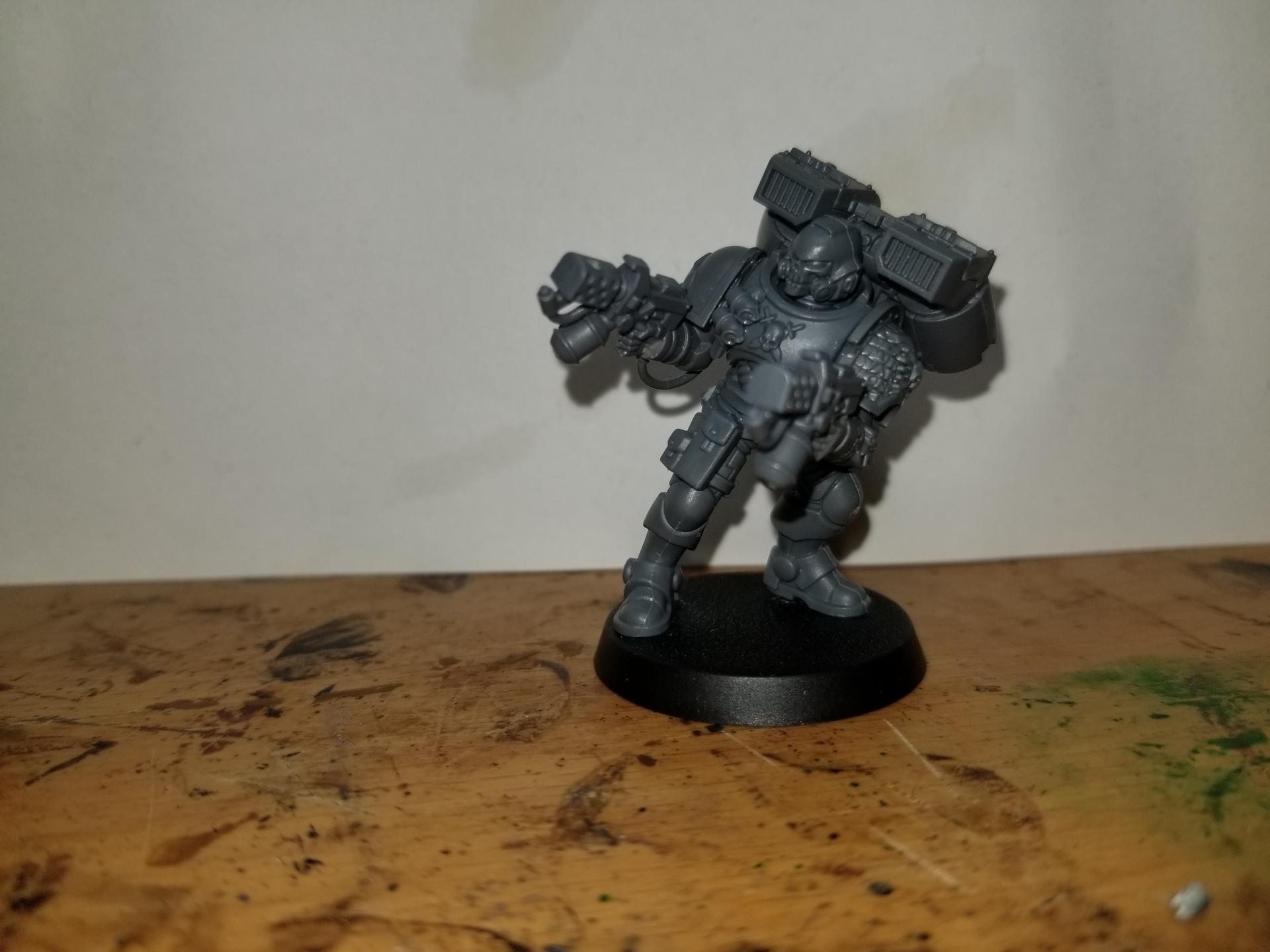 I'm currently holding off on painting.  I doubt the new contrast paints will be very good for Deathwatch marines, but I might as well wait to find out for sure.

That's a glorious collection! Can't wait to see the progress!

I really like those Reaver conversions - did you use the standard marine arms that came with the veteran kits for the arms? (I'm especially curious about the Thunder Hammer)

That's a glorious collection! Can't wait to see the progress!

I really like those Reaver conversions - did you use the standard marine arms that came with the veteran kits for the arms? (I'm especially curious about the Thunder Hammer)

Yes, all of the backpacks, arms, and most of that weapons are from the veterans kit.  I really didn't have any trouble putting anything on the Reivers, even the two handed weapons.

So I finally got my hand on the contrast paints and did my first model.  I tried to prime with a zenithal highlight, though I don't I really got much of an effect out of that, but I did dry brush on some metal before the Black Templar contrast, and I was very please with how it came out.  It is a nice black with a mild metallic shine. 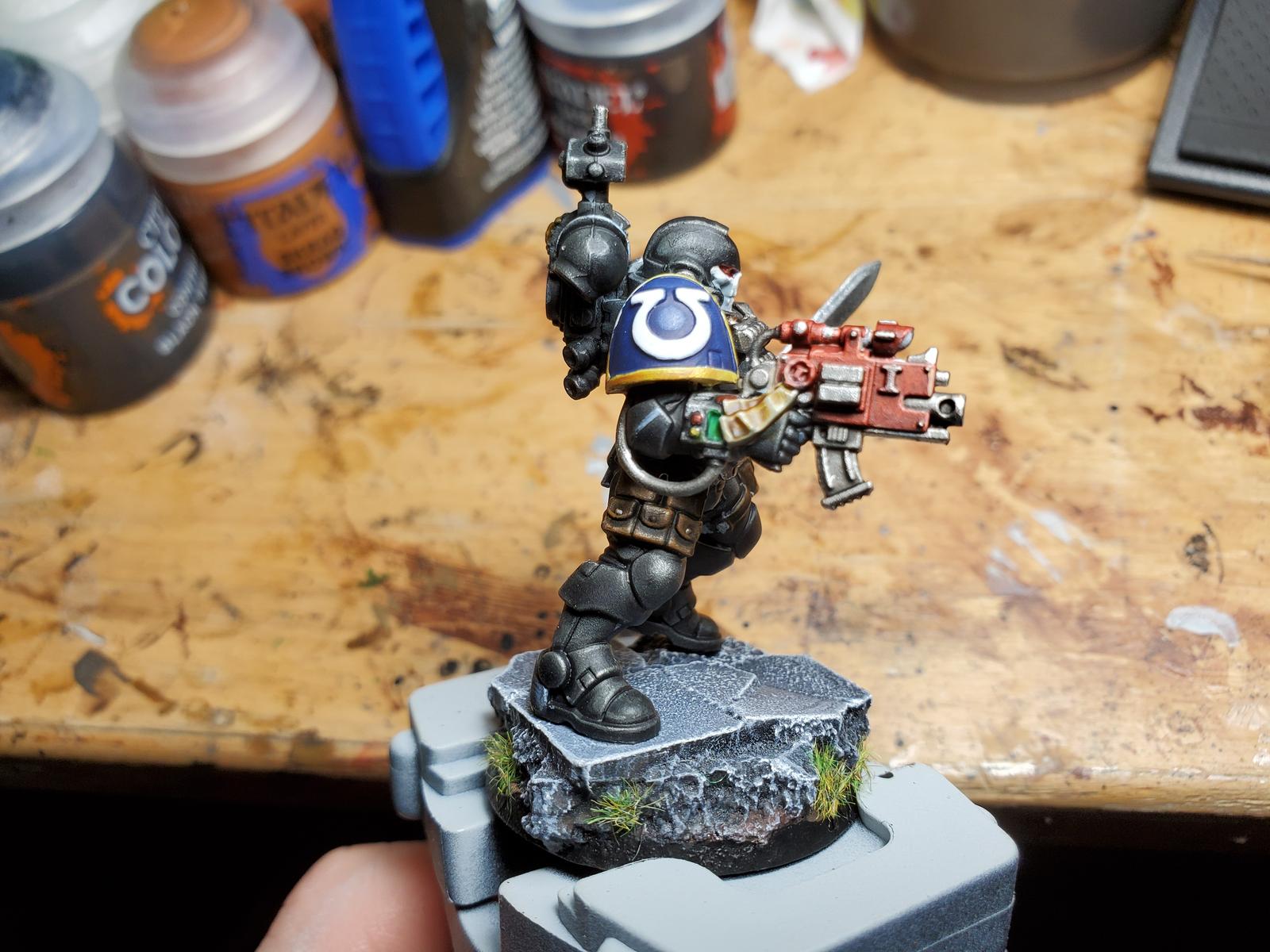 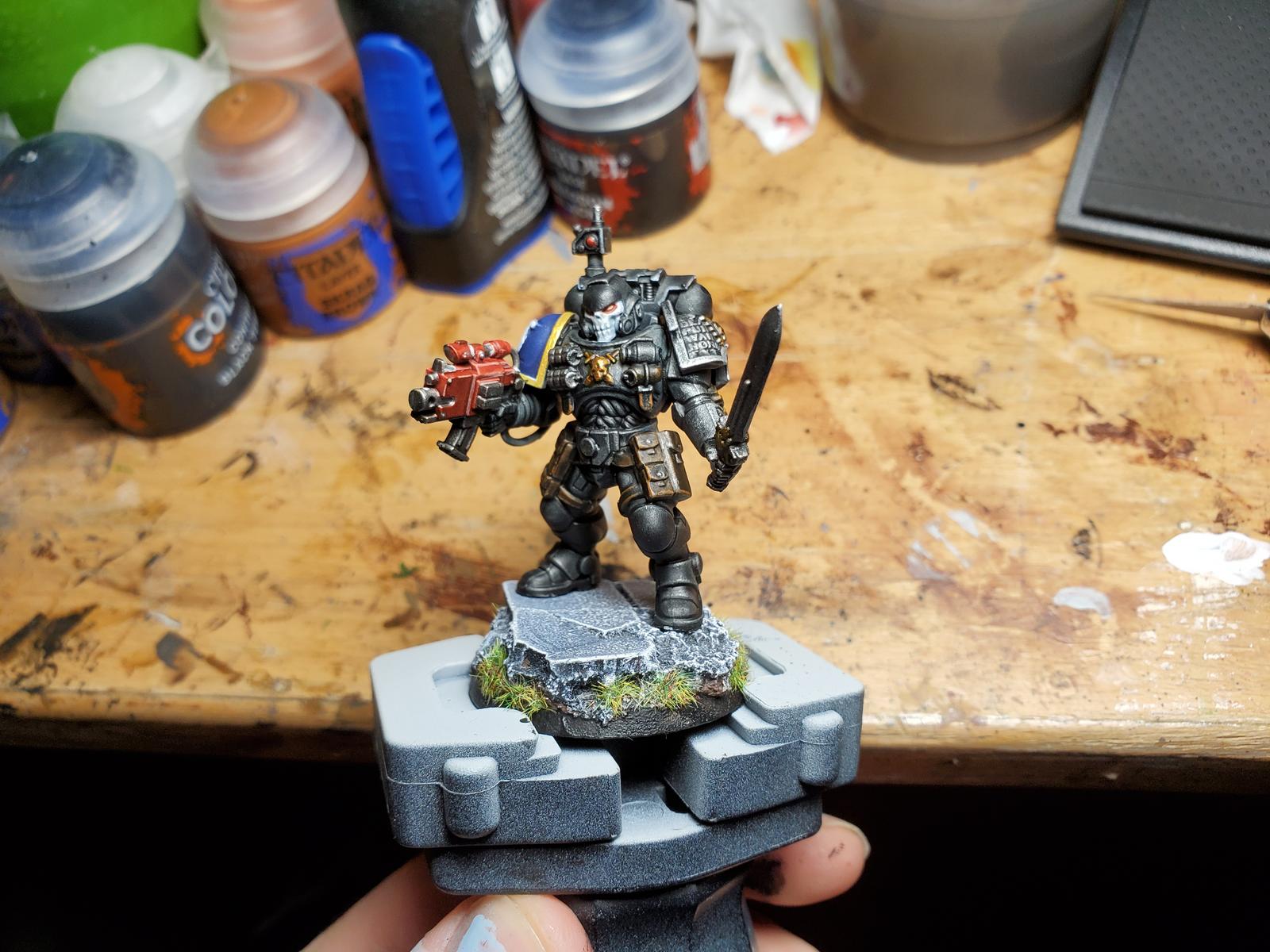 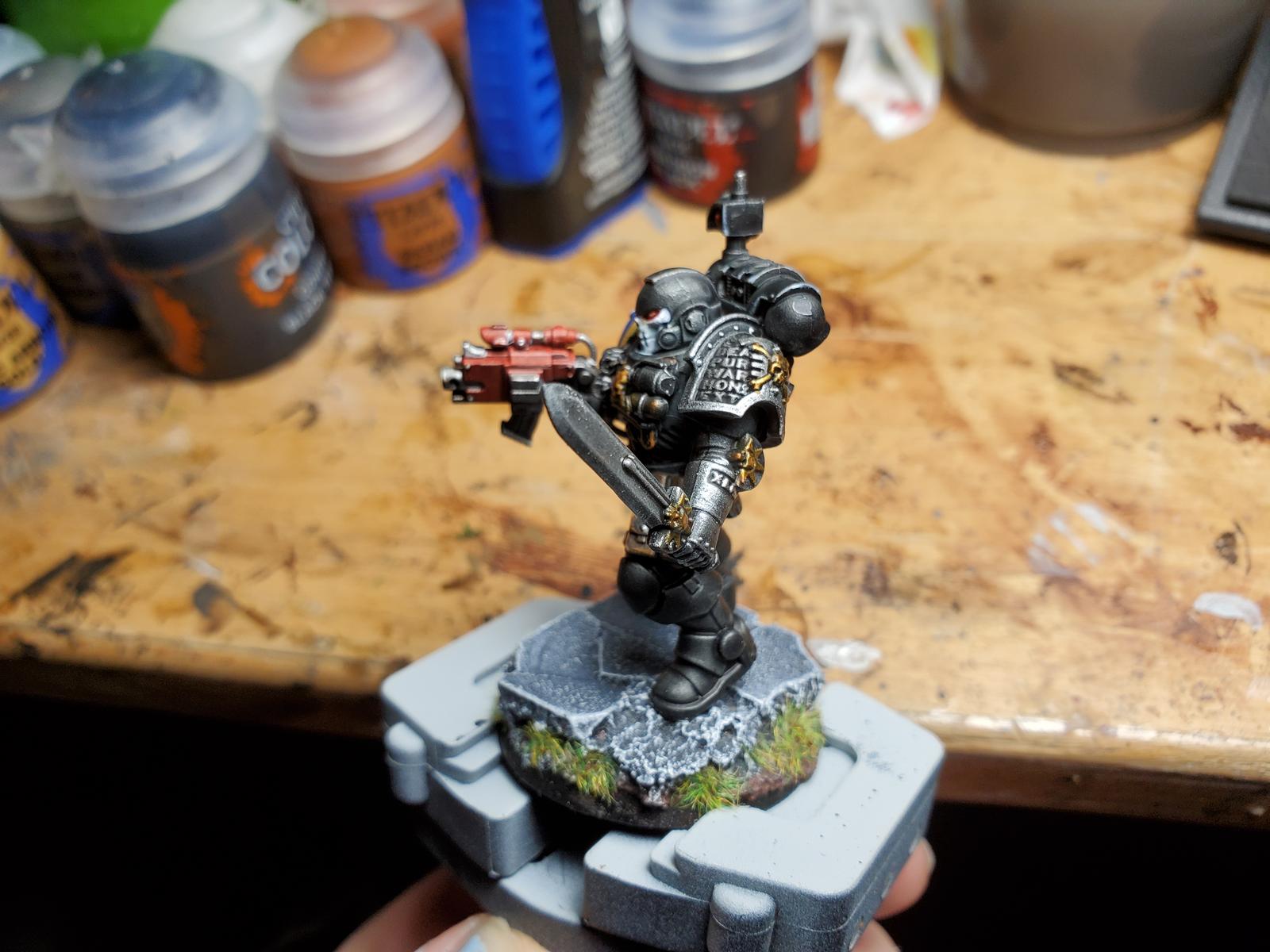 That looks great! When you say you tried to Zenith highlight, was that a black primer with a gray/white zenith spray before the metallic dry brush? And did you do any highlighting after the Black Templar contrast paint or are those highlights from the dry brush on the base & contrast?

For the zenithal Highlight, I put the on the black primer from below, mechanicus grey at the side, and grey seer from above.  I think I when a little to heavy with the grey seer so only the darkest bits would really be able to have that effect.

Then I went over with necron compound.  I actually grabbed a picture of that stage 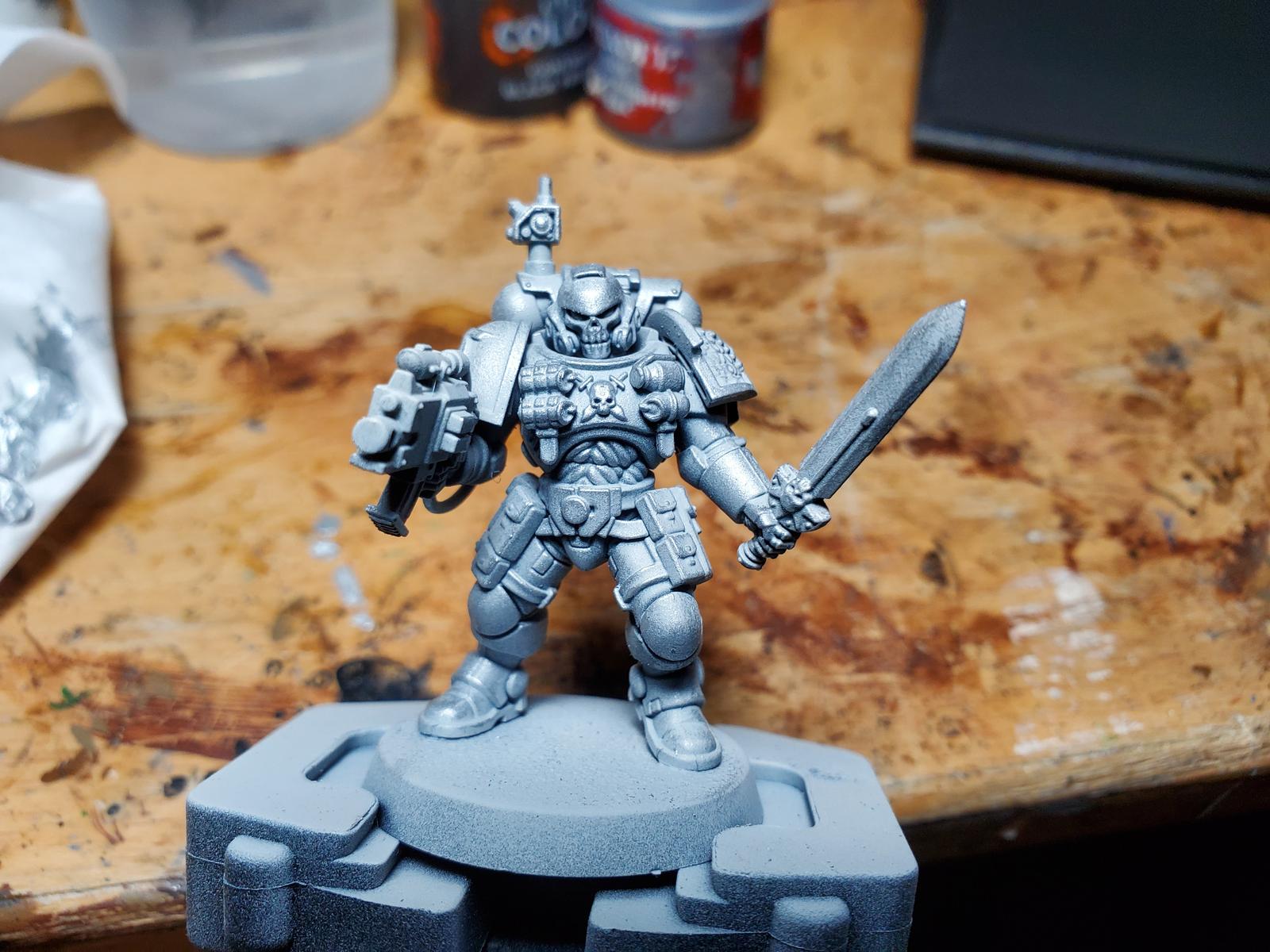 So basically a very light metallic color with a handful of shadows.

I did a few highlights on some for the sharp black edges.  Blue Horror for the black sections and silver for the metallic ( most notably the belt buckle and some of the backpack).

Interestingly I didn't have to highlight his under coat at his waist.  The contrast flowed off that texture nicely.  The legs also have very few highlights.

The gun is Blood angels red contrast with a Lugganath orange highlight, same with the eyes.

The face is Grey Seer with Apothecary White Contrast.

The shoulder pad is Grey seer with Ultramarine Contrast, Iyandan with a light layer of gold, and Ceramite white.

The little details on the right arm also included the red and yellow contrasts, as well as Warp Lightning and skeleton horde.

The pouches are Wyldwood with a skrag brown highlight

While the metallic arm did have the Black Templar on it, there are enough layers on it (including nuln oil) that it doesn't come across. The brass and gold bits do have some snakebite leather Contrast on them.  That one is fantastic on metal.

So except for the pure metallic bits.  The entire model is contrast with some edge highlighting.

I think my facorite thing about the contrast is how smooth it looks.  It's not as detail as my Librarian up the page, but it came out cleaner.

I went ahead and base coated the rest of the squad and grabbed a picture before doing anything else. 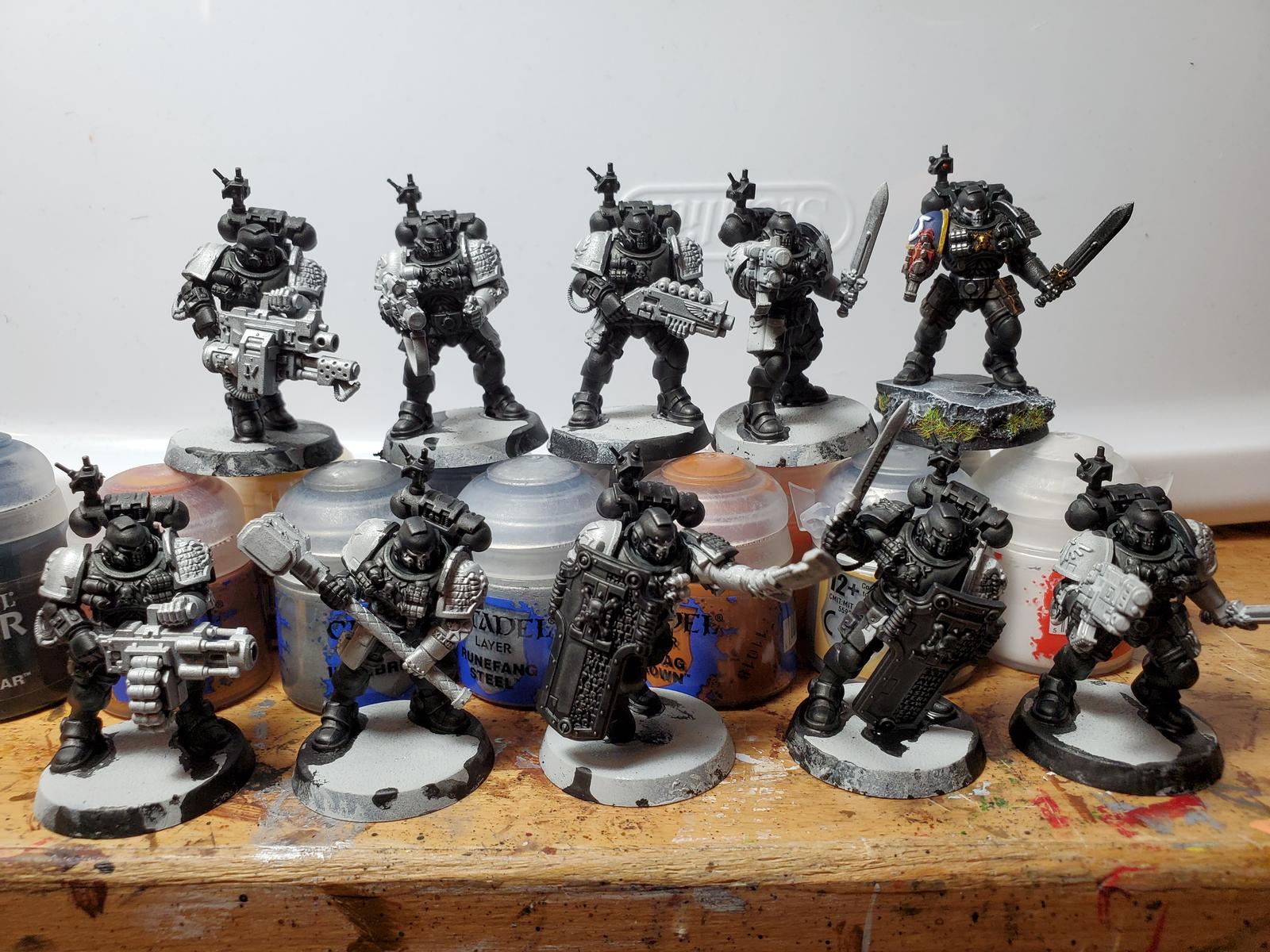 I've found that the easiest way to avoid unwanted pooling is to put a lot on the model and let the capillary action do it's thing.  Once it's down I don't move it except to use an empty brush to suck some up.

Finished up the kill team 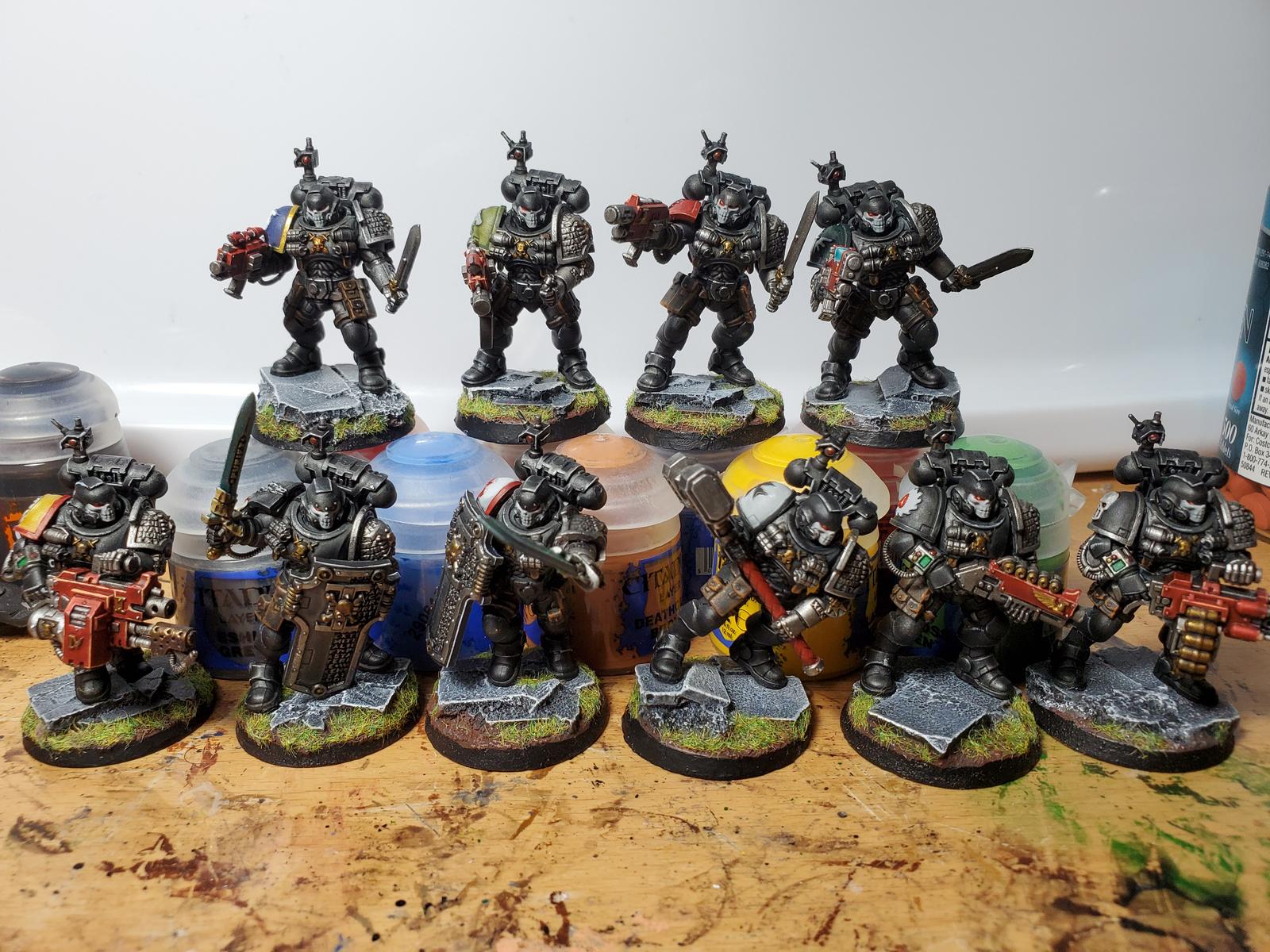 Excellent work on the Reivers.

Finished converting my HQ's still working on converting about 50 veterans to Phobos armor. 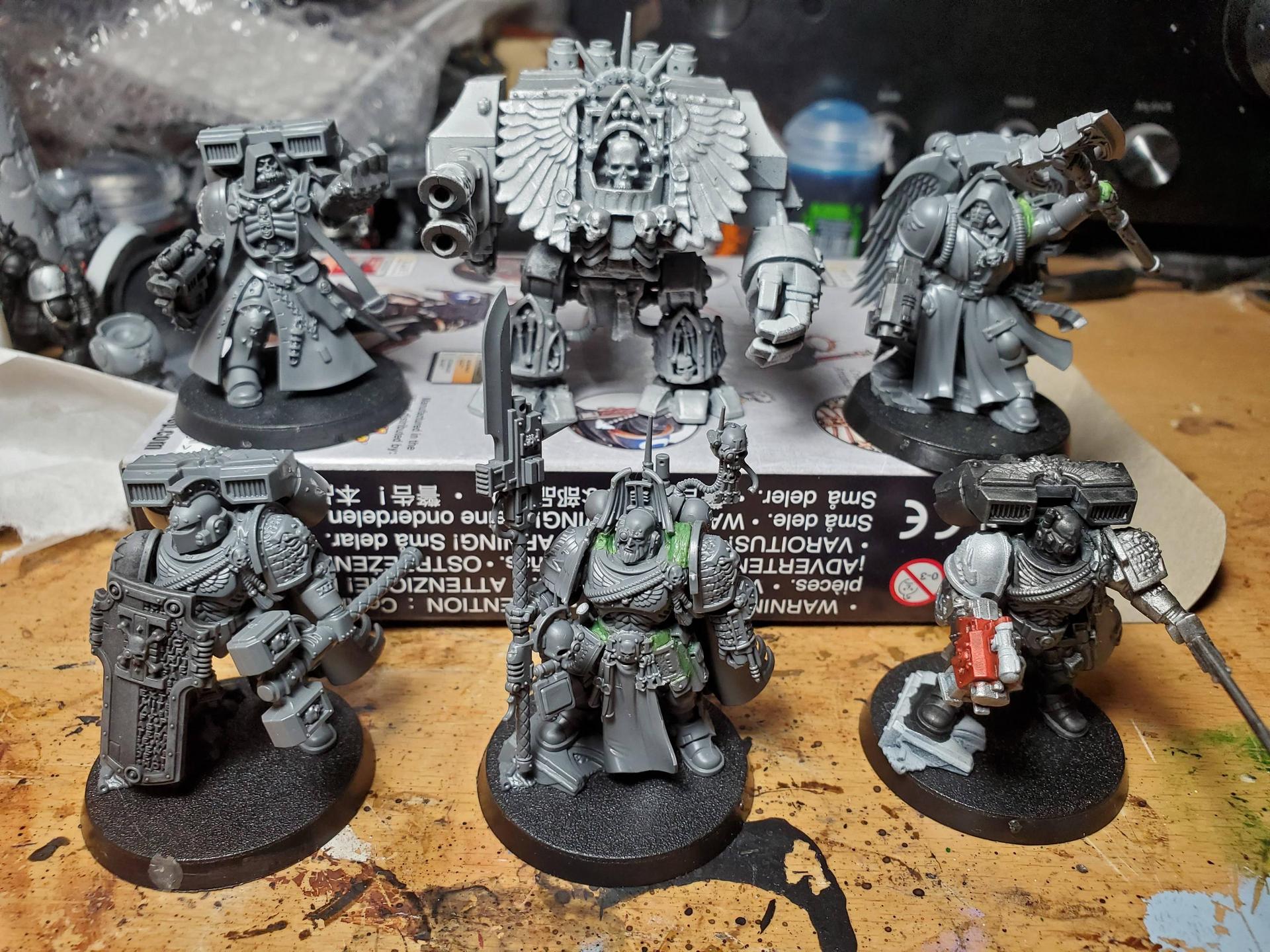 After stripping tons of paint (that's why most of the plastic is dark) and a lot of of converting, I have finished assembling my Phobos Veterans.

I haven't put it all into Battlescibe, but I've easily got 5000 points assembled here

On the left are the deep strikers with a pretty standard loadout : Sarge. blackshield, Vanguard, two terminators, and SB/SS Vets

Above them are two breacher squads, one with combi-plasma and one with stalkers.

In the middle are my razorbacks each with a six man squad with two frag cannons.

Next are my dreadnoughts.  1 Chaplain, 3 Mortis Contemptor, 1 Leviathan, 2 Venerable, and one Relic Contemptor.

Finally, the guys on the right are the one that are meant for kill team, so mostly guys with the type of weapon loadouts that GW had in mind when they made the veteran kit as well as some kitted out Vanguards (also Phobos Armor) and terminators.  Leading them is my Terminator Captain who got hit hard in the FAQ, but still works well as a kill team commander.

I have a handful of FW models that are not assembled.  These include:

There is one other thing that I'm months away from showing off.  I've Commissioned Den of Imagination (They did/ are doing a lot of my Guard) to make some Deathwatch themed Imperial knights.

Now that I've finished building these guys, I can hopefully get moving on finishing my ETL vow.

Got the Librarian painted up 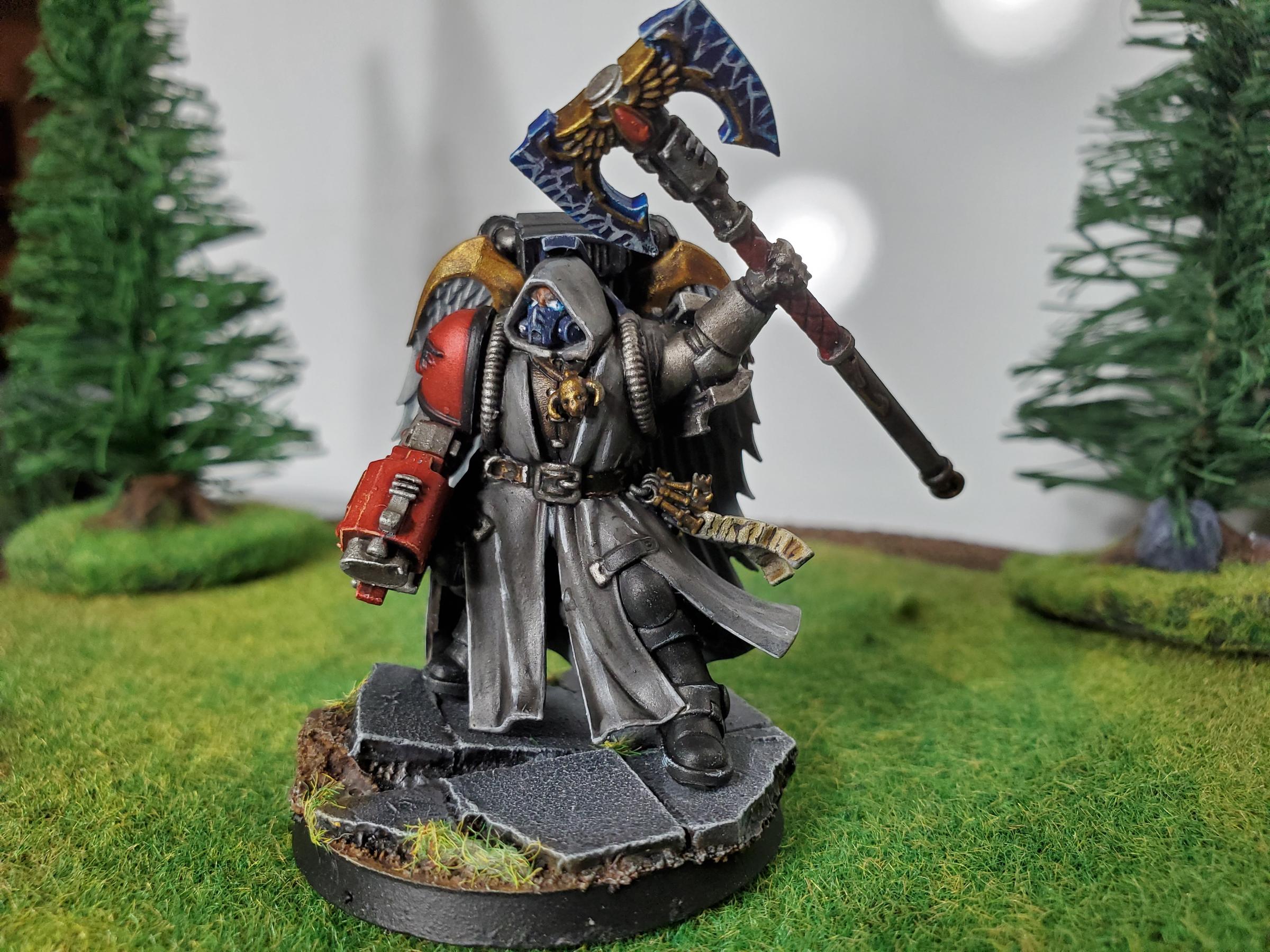 Good job on the Librarian.

Great work on the Force Axe and lightning eyes effect!  Was it much trouble trimming back the model for this conversion?

I got my Chaplain Dread painted.  He is a recast, so some of the details may look off. 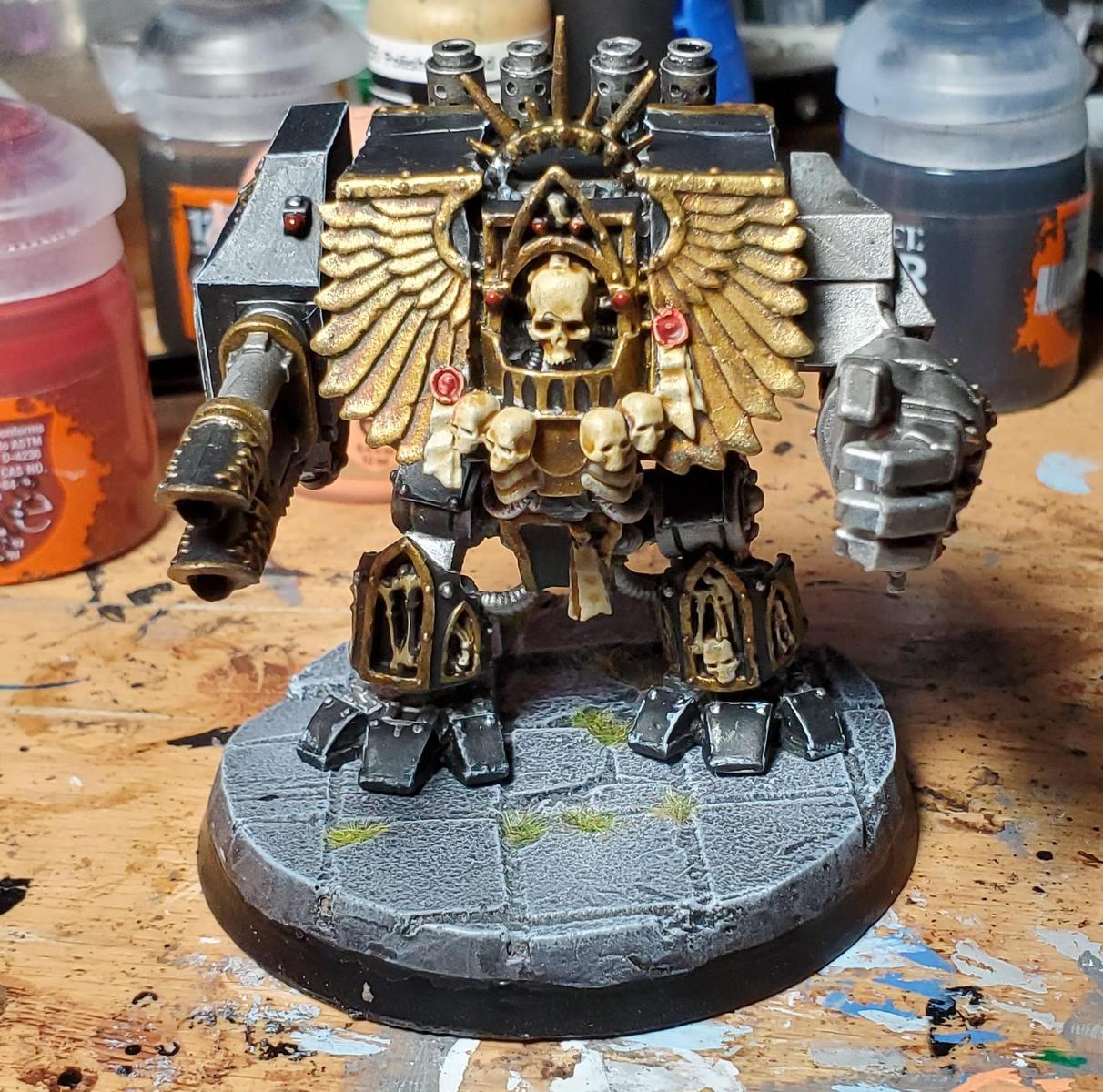 Also, I get to submit a picture for the ETL Artificer poll so here is my janky photo booth I'm using to get the best picture I can 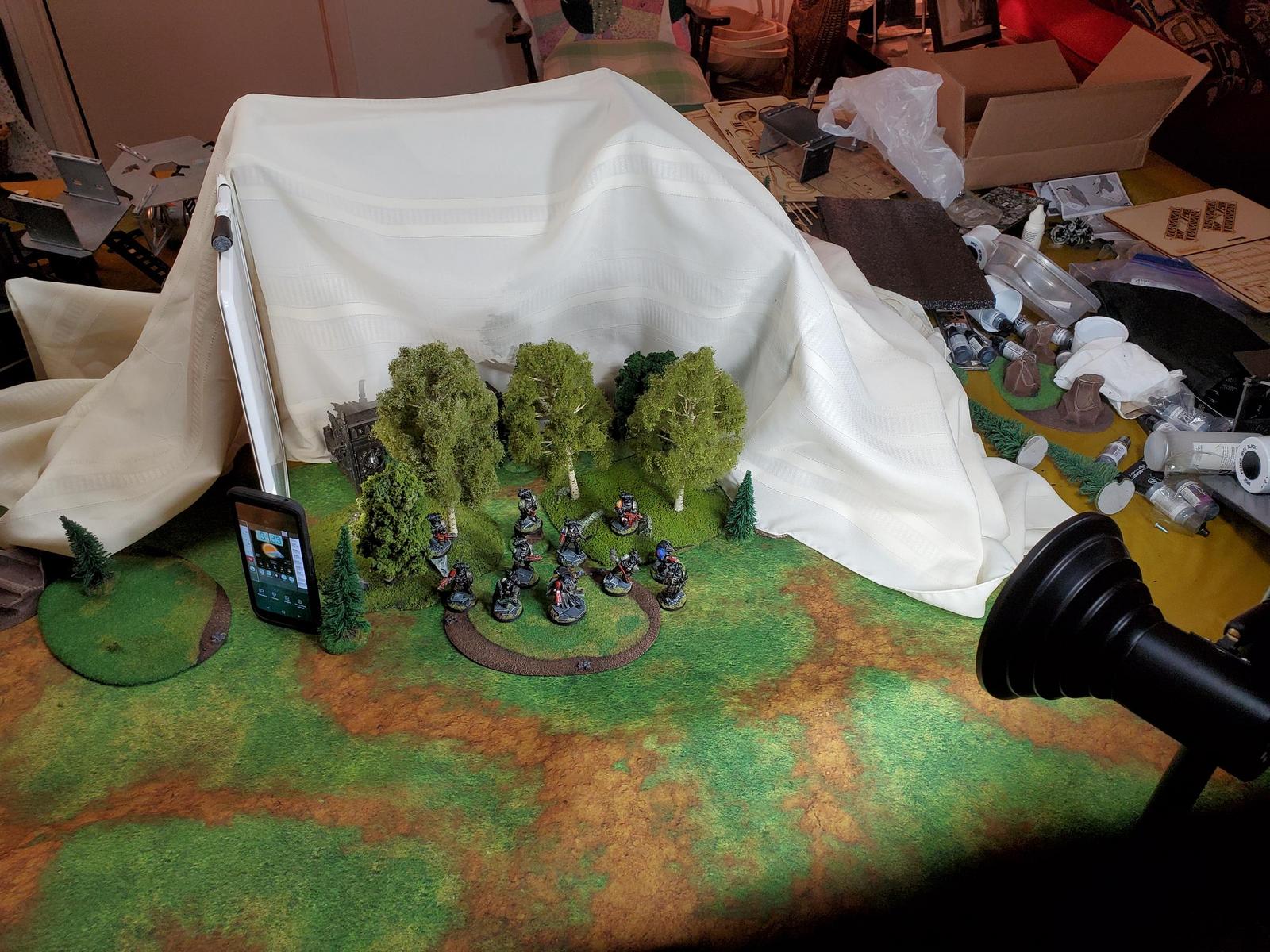 And here is the picture I chose.

It may be painful to convert so many foot troop but it really pays off.
Your power armoured troop look much more high tech and special forces due to their armour pattern, also a great choice to keep the errant armour backpacks.

"In all my years of Study and Contemplation on the Imperial Truth, as close as I can figure out, it has something to do with Being on Fire."

Direct Quote from Chief Scribe Sweideger Steiger, Shortly before being burned to death by Sister Superior Larisa for Crimes of Heresy

I've spent much of my recent 40k time prepping things for painting, but I did decide to paint this guy up. 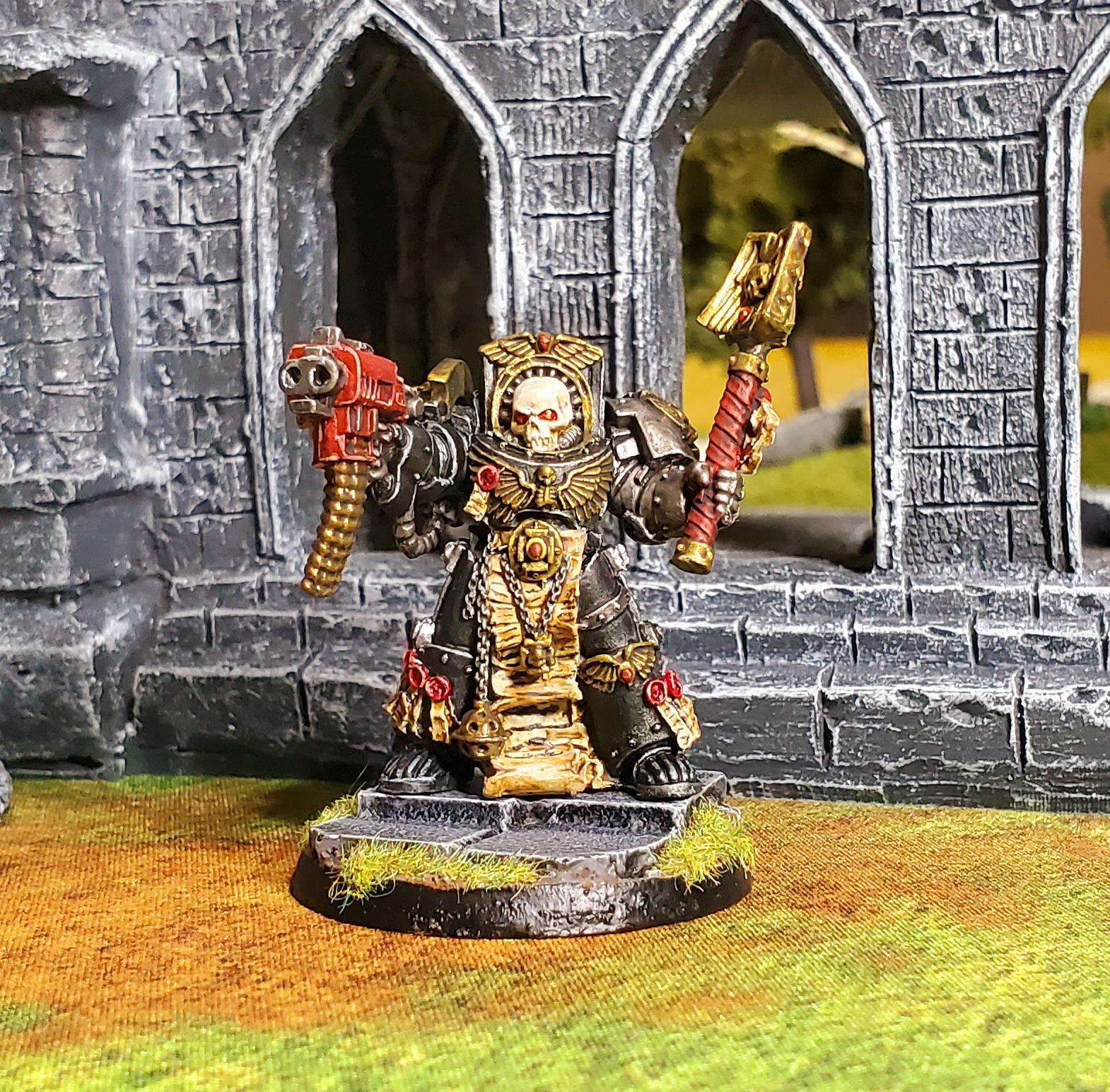 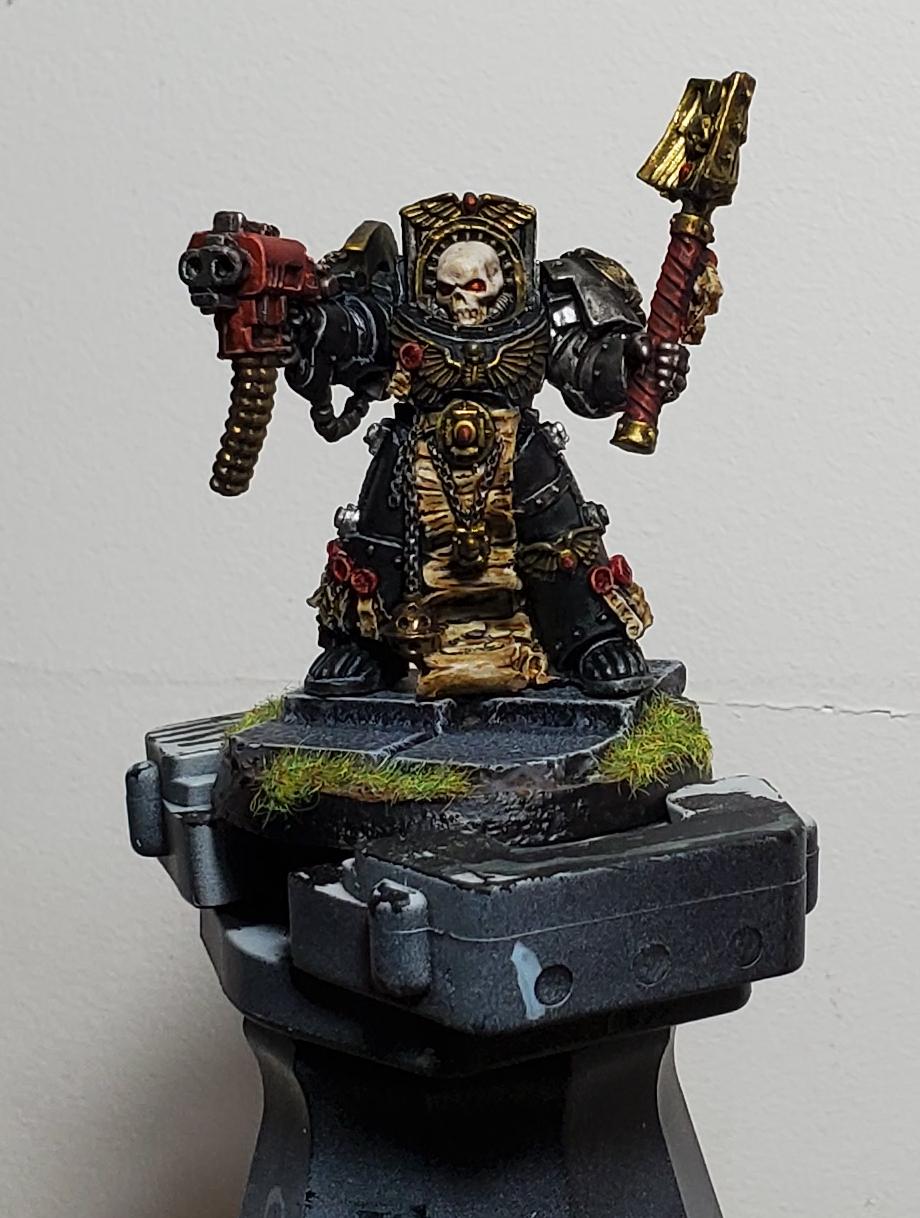 I haven't had much time to work on this stuff this year, between a new job and a new place. After kit bashing this guy over a year ago, I finally painted up my Watch Master in Phobos Armor. 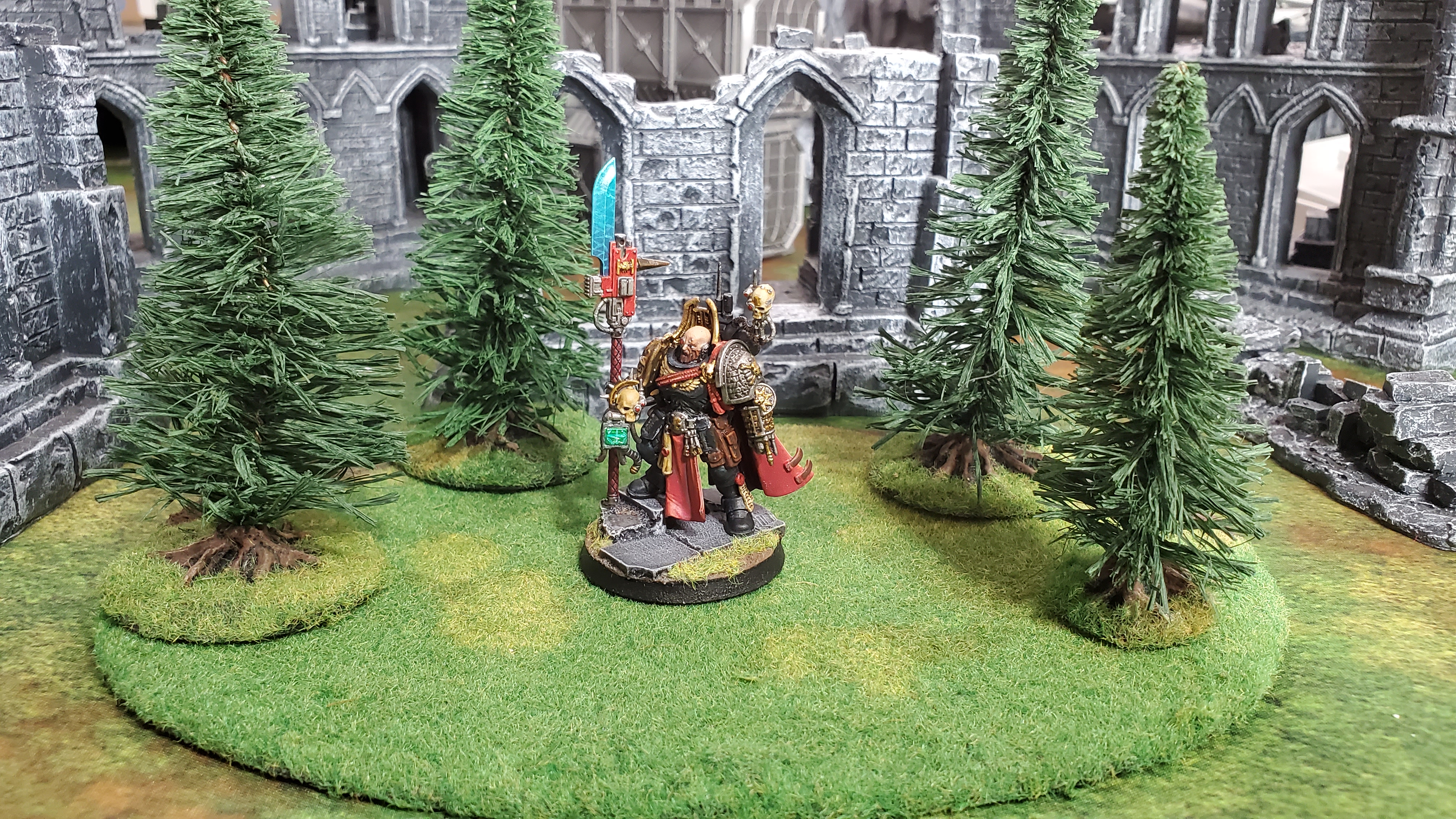 I've been focusing on getting some more of my Deathwatch completed and today I have two new Fortis kill teams.  They are both made for solid mid range fire power.  From a painting perspective I've been adding a handful of guys without helmets and I'm pretty happy with how the faces on the sergeants turned out. I've also finally been adding those squad markings and their knees.

I'll also note that when ever I upload pictures they always look so much worse than in person, however this time I I'm not really seeing that effect. I've been focusing on much smoother coats of paint, so while there are mistakes in the details, the close ups are less gritty and chunky. 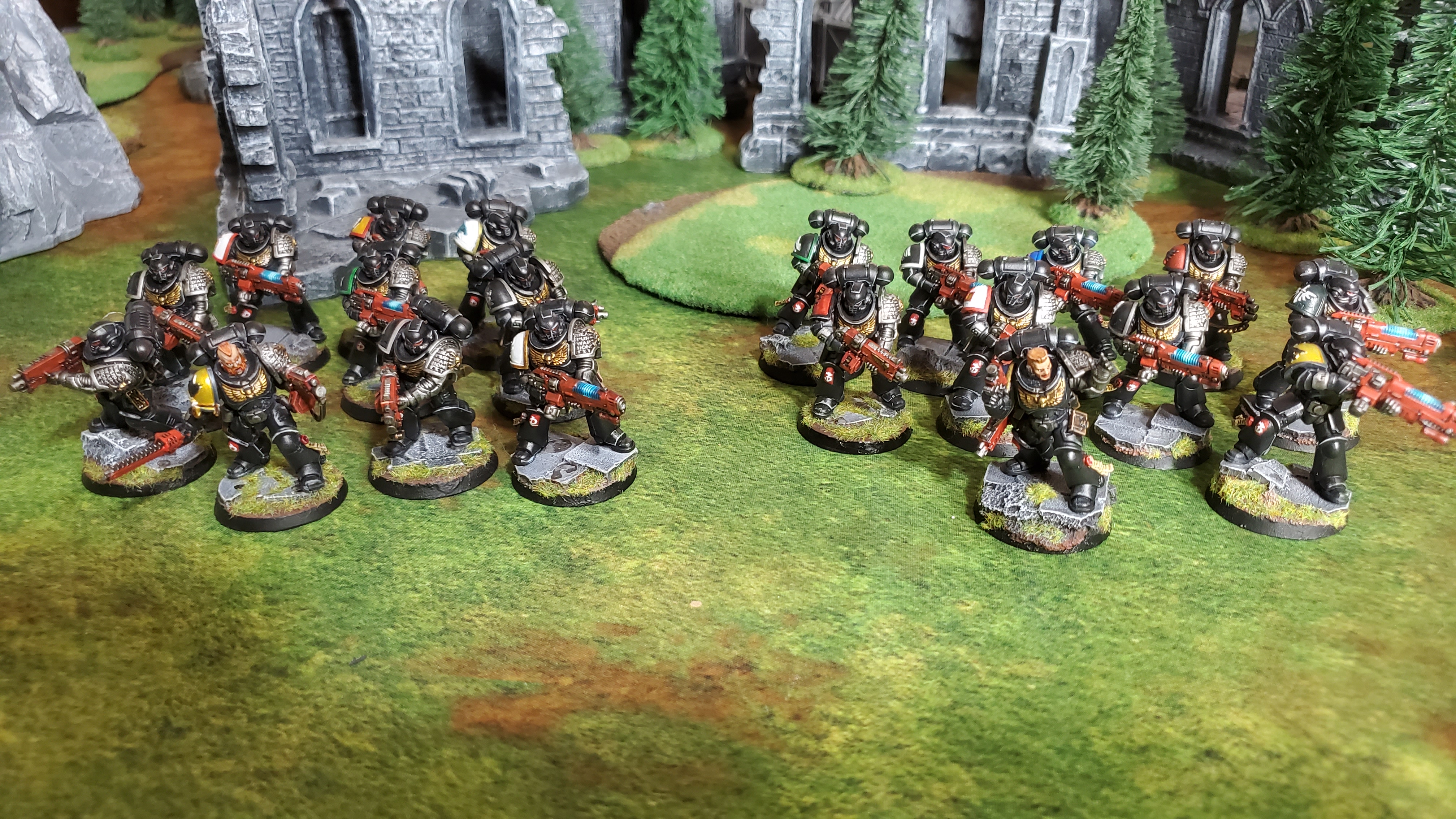 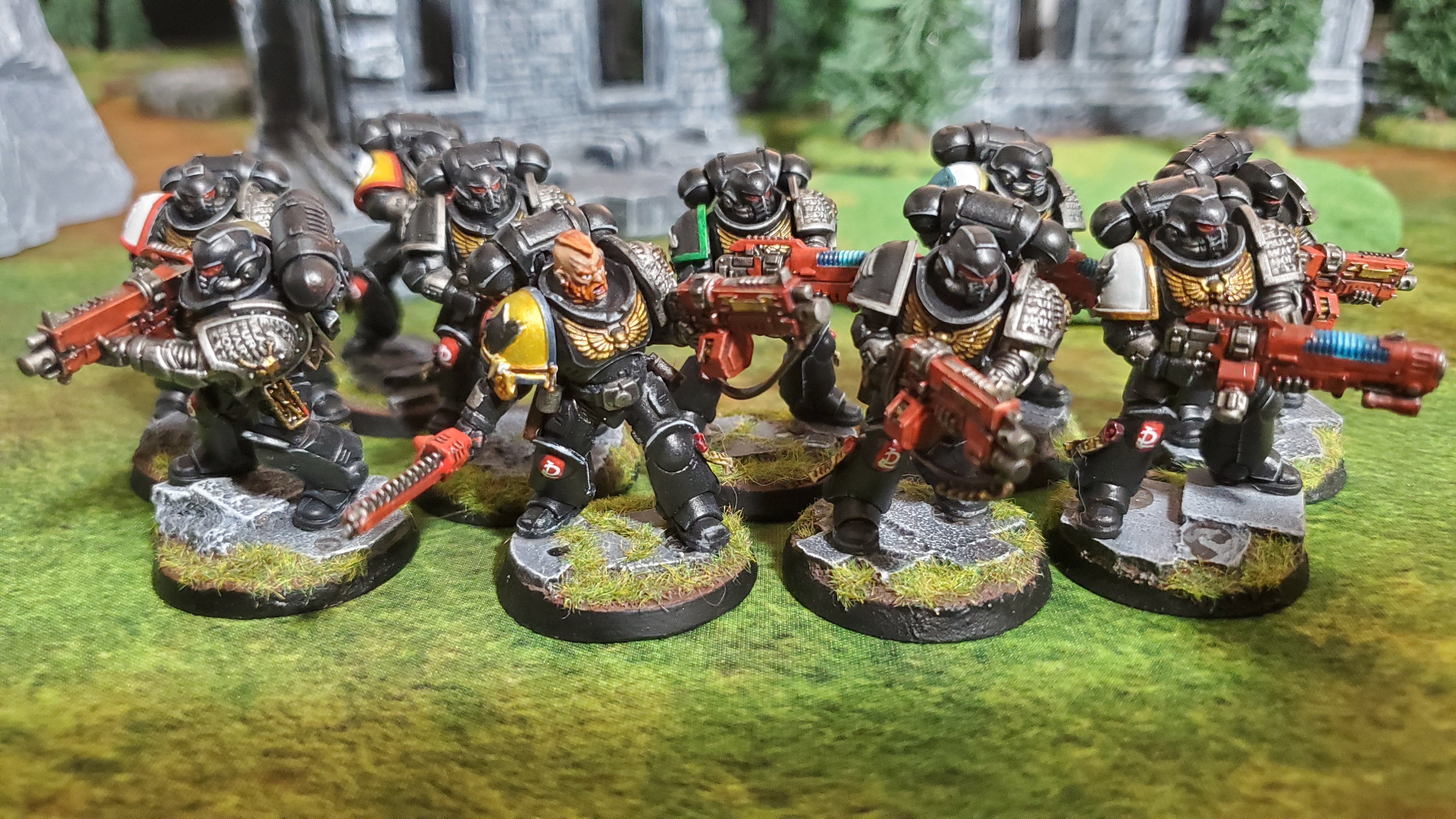 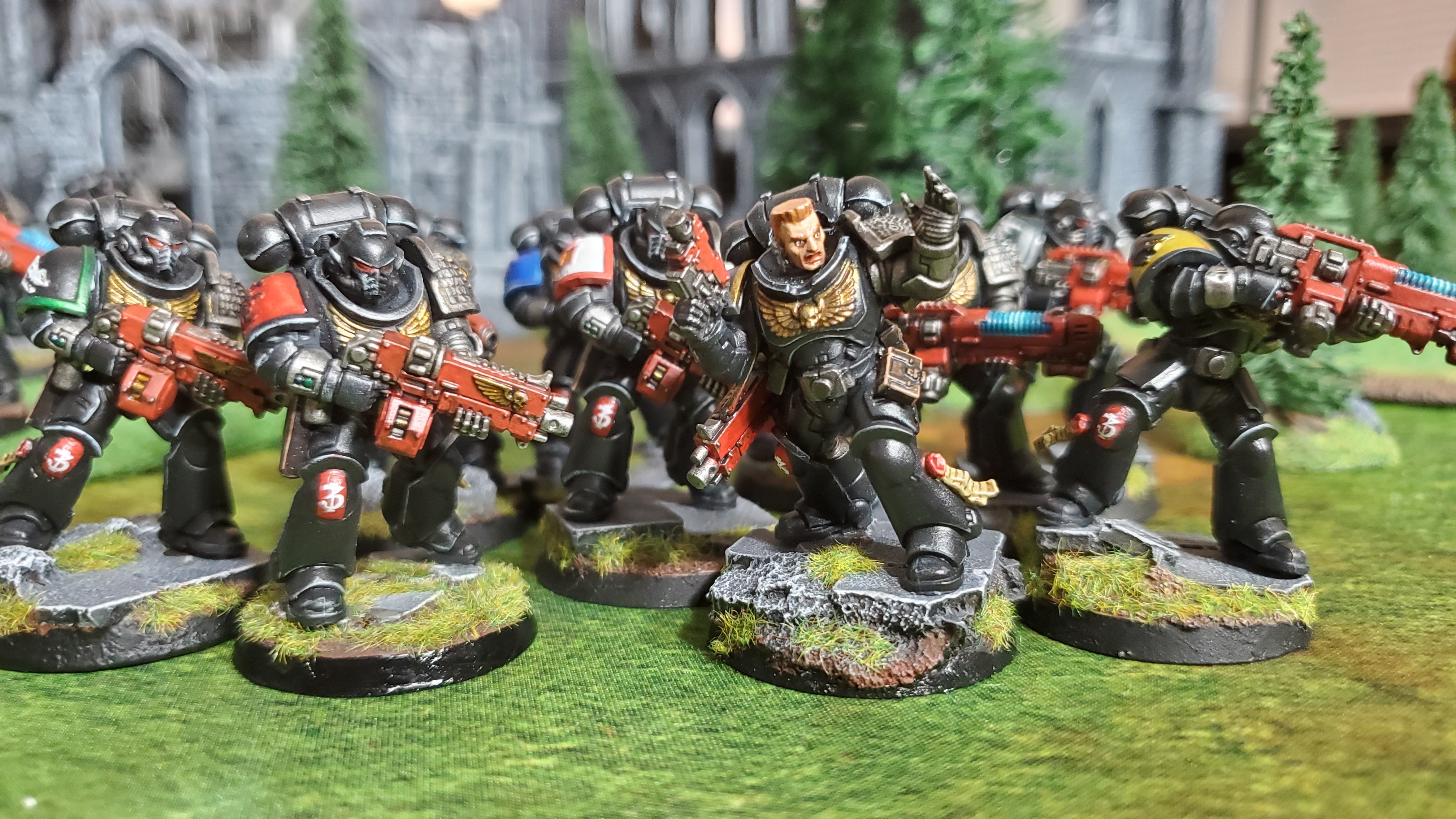 Good job on the models.

Reasons to use the Steel Crusaders ('Codex: Space Marines' supplement) or the Iron-hearted Angels ('Codex: Blood Angels' supplement): Because you think giving Sternguard Veterans a heavy bolter wtih special issue HEAVY BOLTER ammunition is ALMOST as much fun as shoehorning an Earthshaker cannon into a Land Raider.
Back to + DEATHWATCH +