I, TiguriusX, declare my 5th and final vow of E TENEBRAE LUX on the side of the Space Wolves COMPLETE!!!!!

And an extra shot of all 3 venerable chaplains I run in my list.  With 1 acting as the warlord

Captain Semper I want to thank you for holding this event.  It is a great inspiration and the only time I have pushed myself to paint.

I have a 5-man unit of terminators remaining before I have my first ever 2k point army fully painted.

I am struggeling with RL. This year is not my year compared to last ETL. But i am still running. My Terminators and the Wolflord are in the making, nearing the stage which i feel good enough, but the tank still wants to be asslembeld...

Well done indeed - a spectacular force you have there. Now, time to do something about those bases?

Kinsmen, I am happy to declare my vow complete and a mighty new weapon joining the ranks of the vlka fenryka 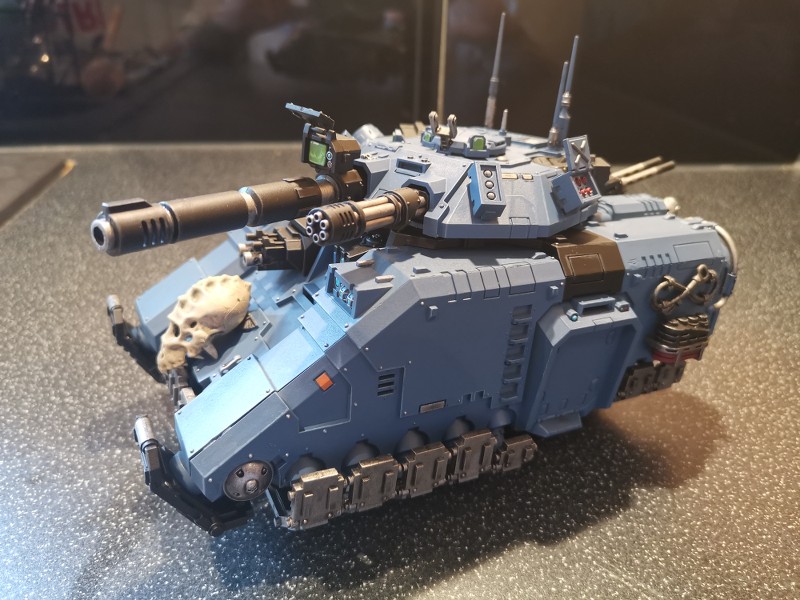 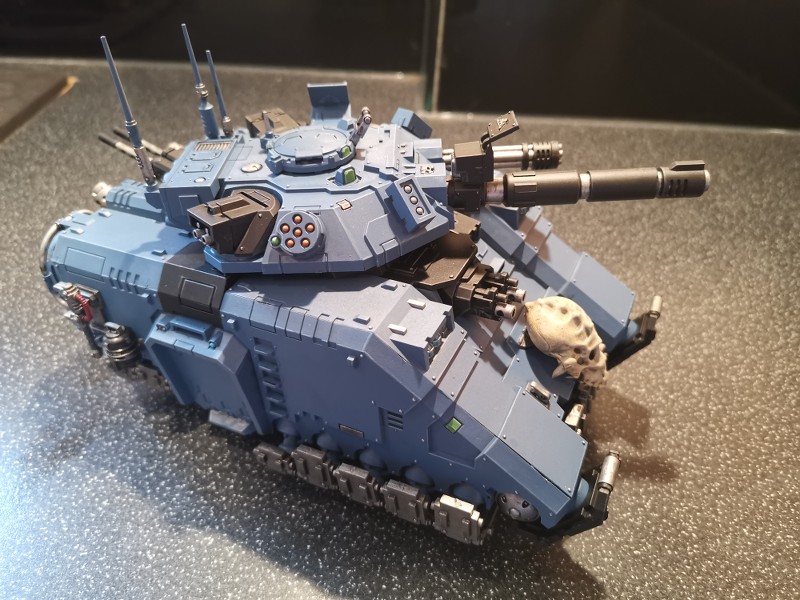 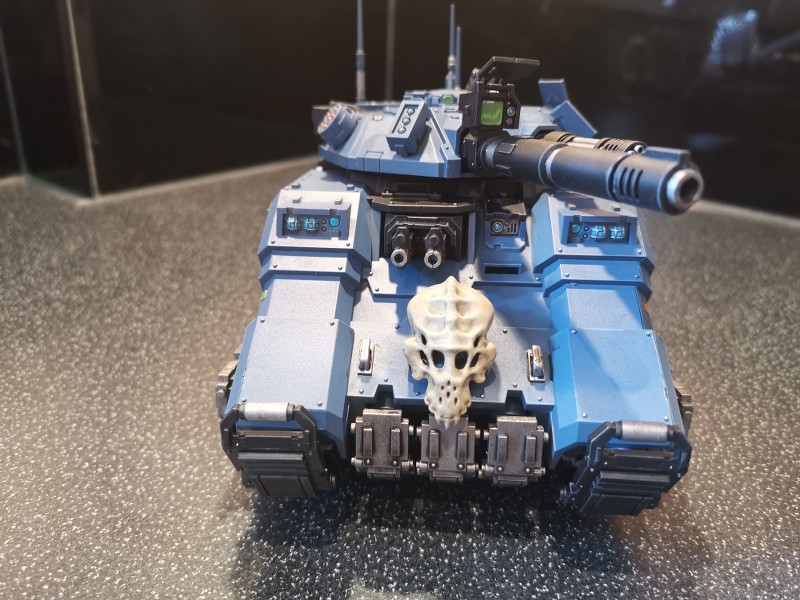 I have a game against death guard lined up for the end of the month where I will see how she performs and if Russ wills it she may even earn a name !

nice clean work there. love it. i need to find some giant xenos skulls they look so nice on our vehicles and dreads

So, any more SWs ready to report completions? 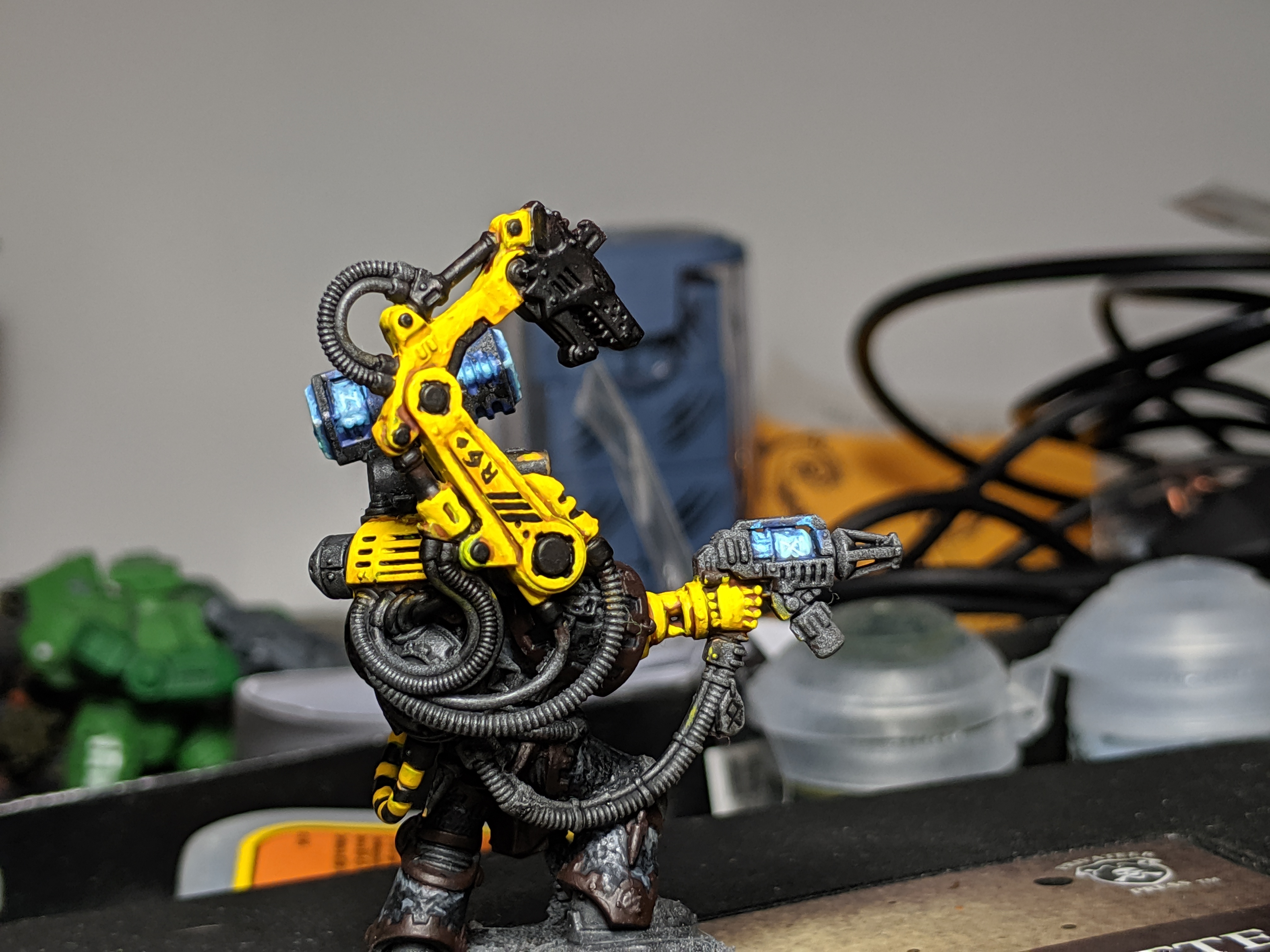 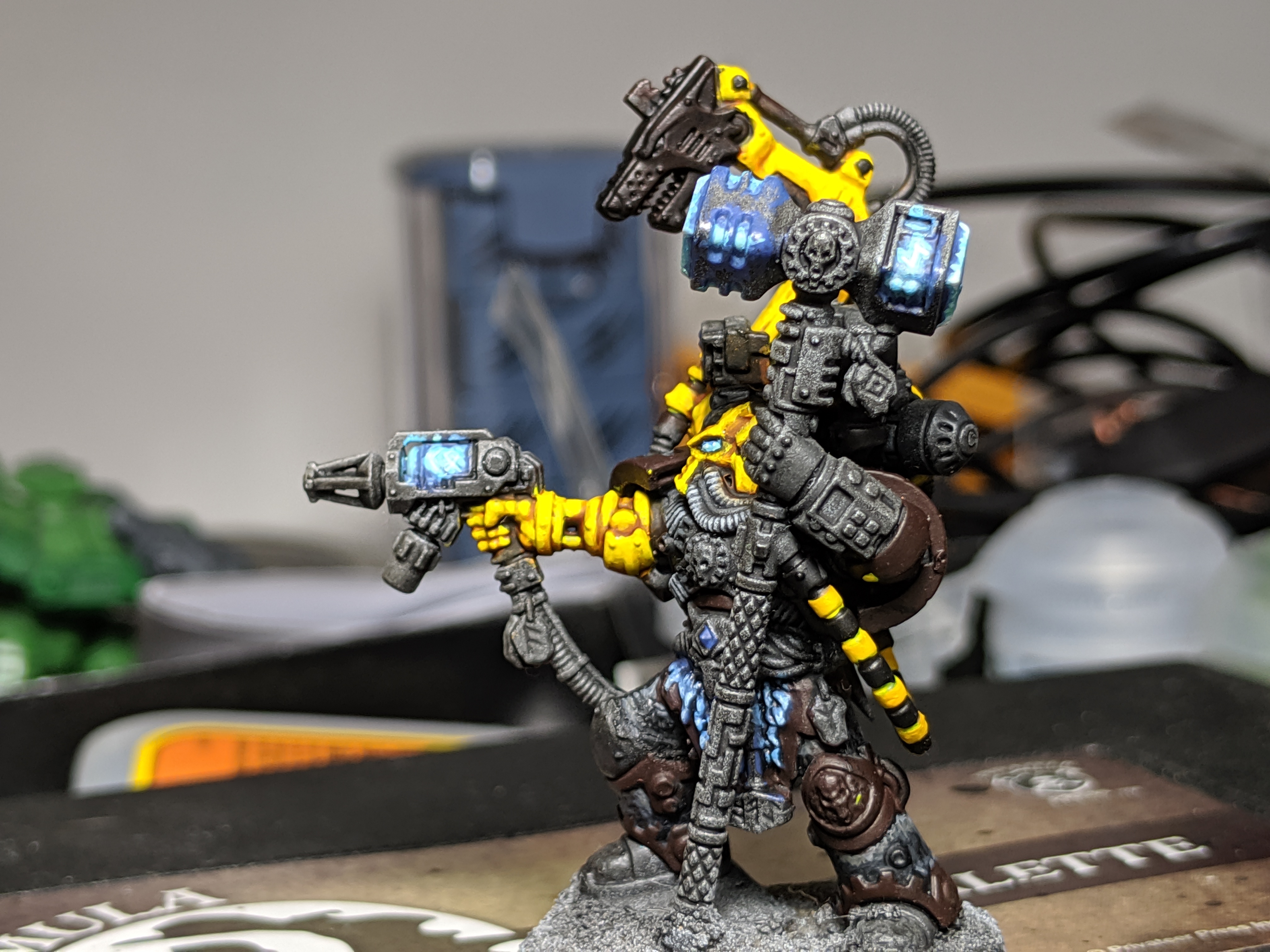 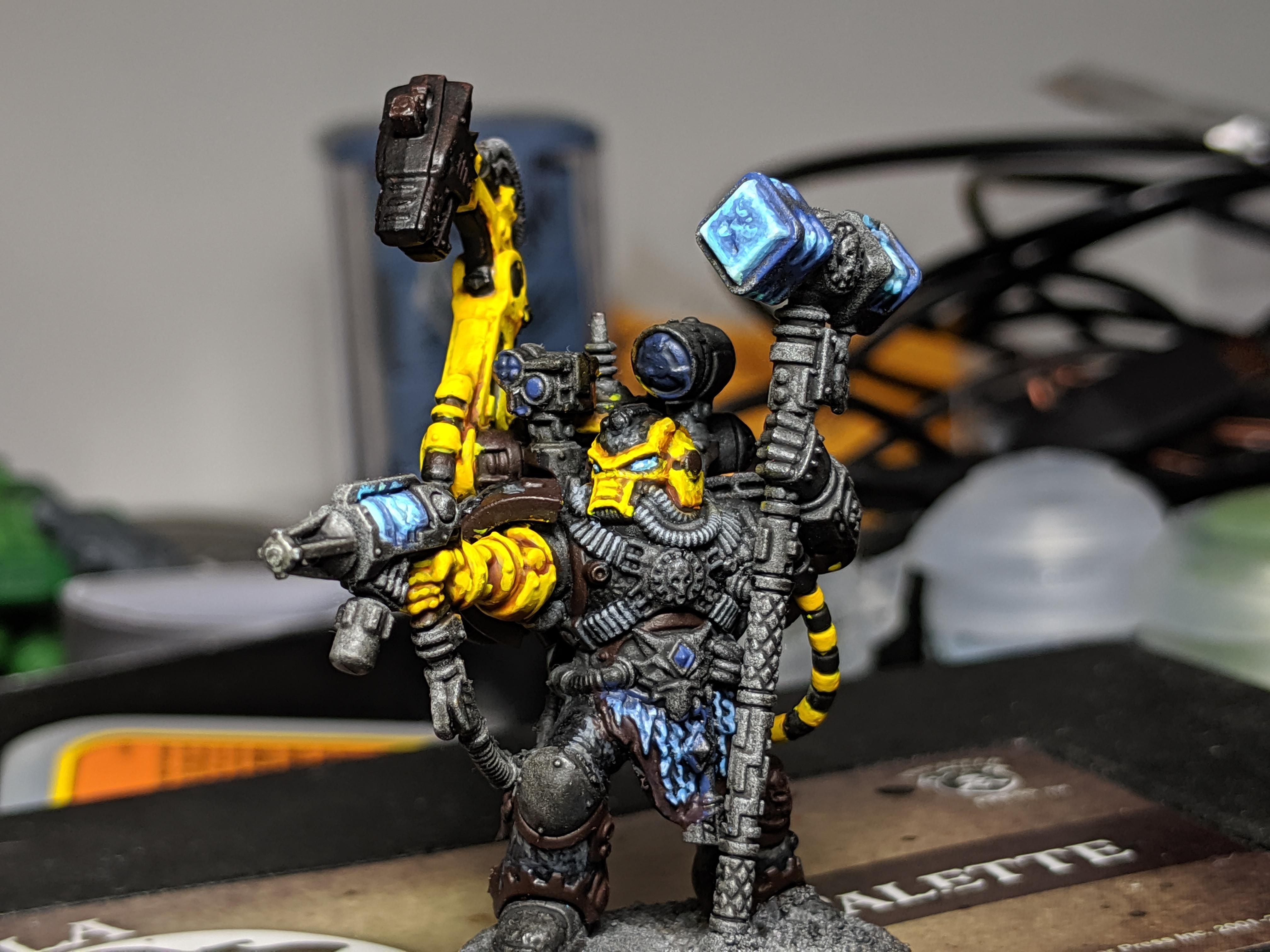 He is looking great, nice work.

I declare my second pledge for the rout complete: 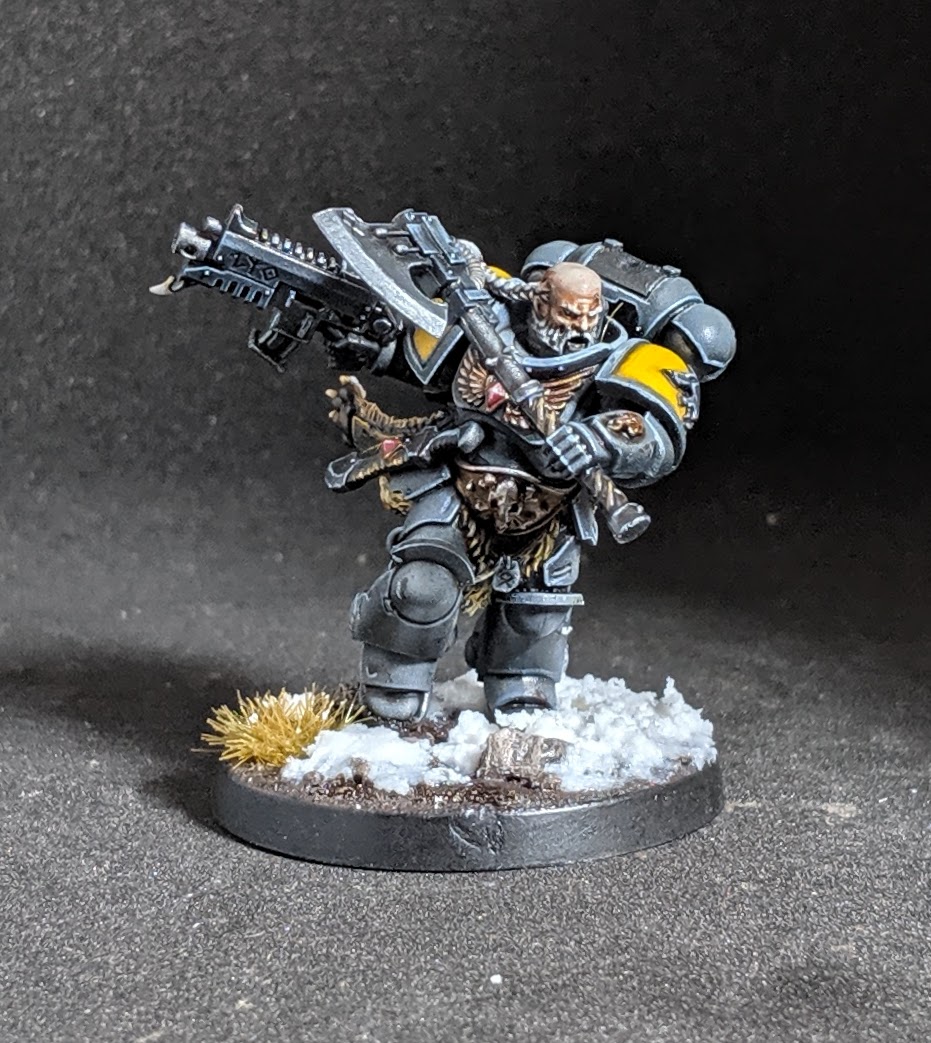 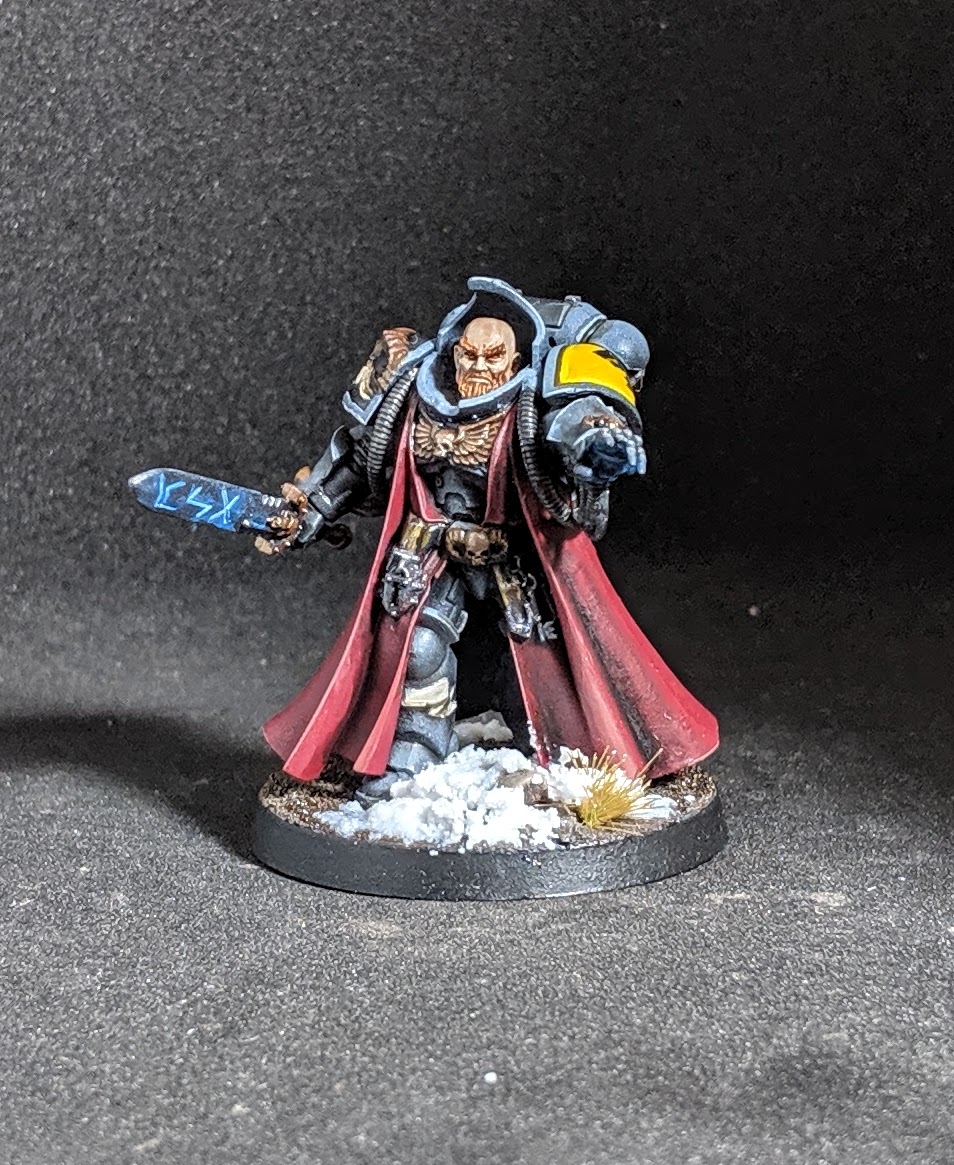 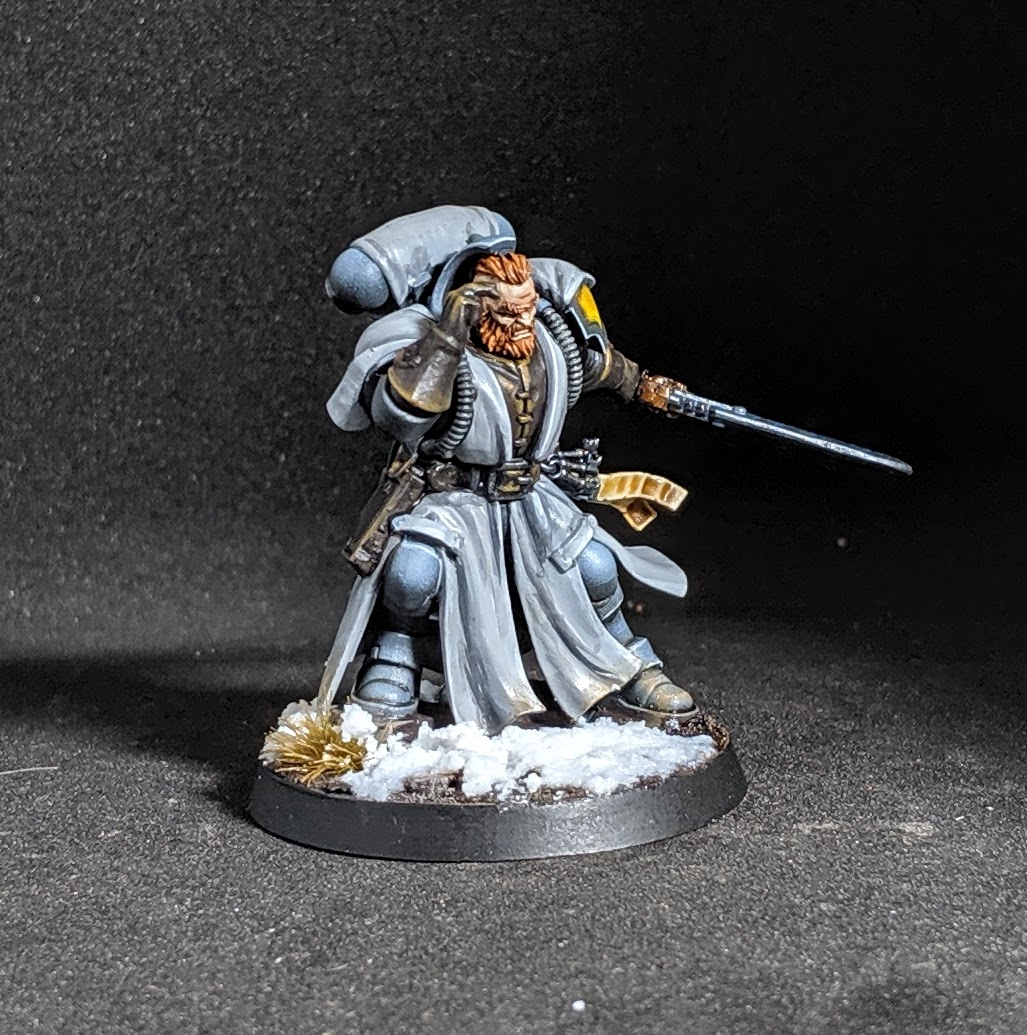 Ven Dread with Shield and Axe: 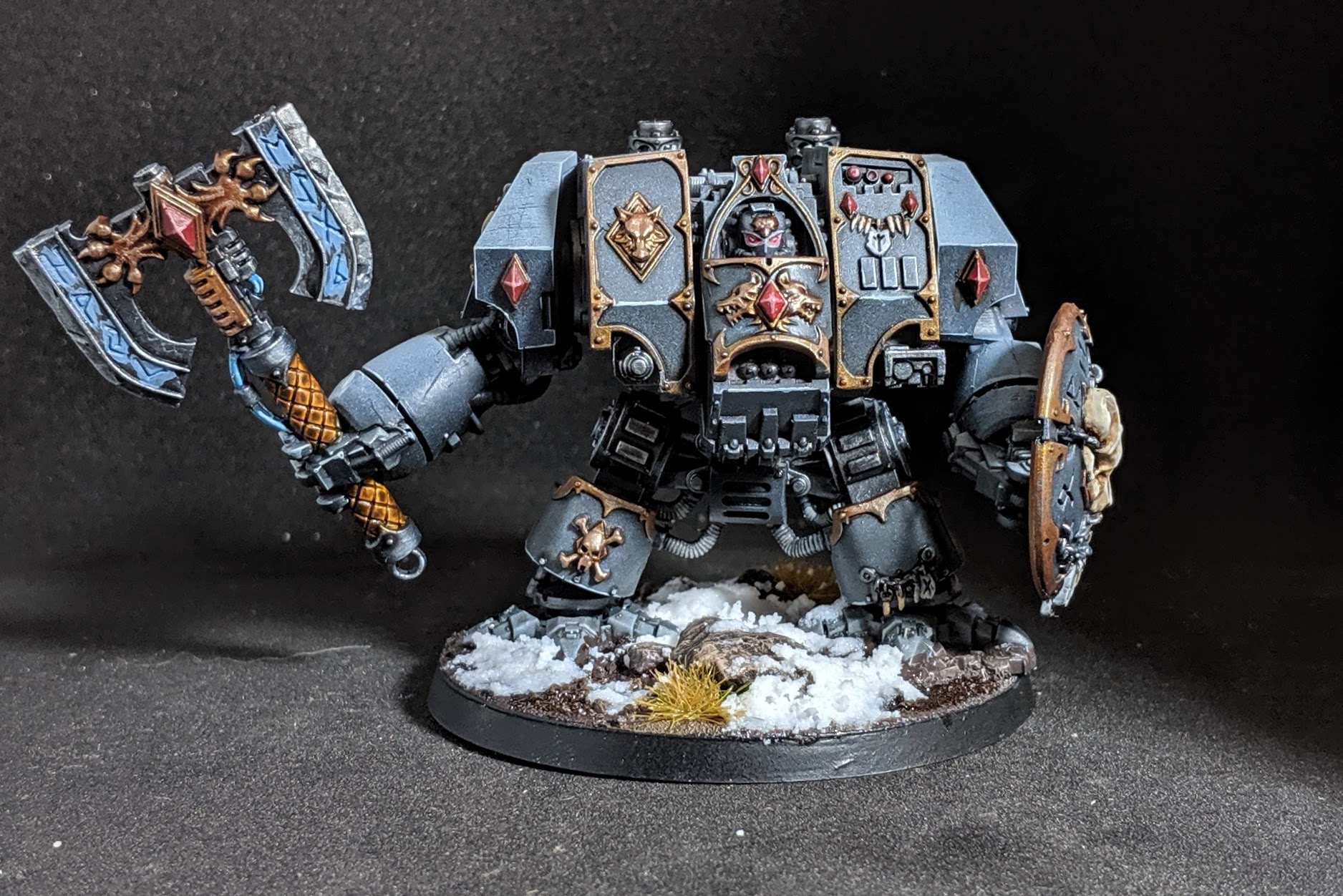 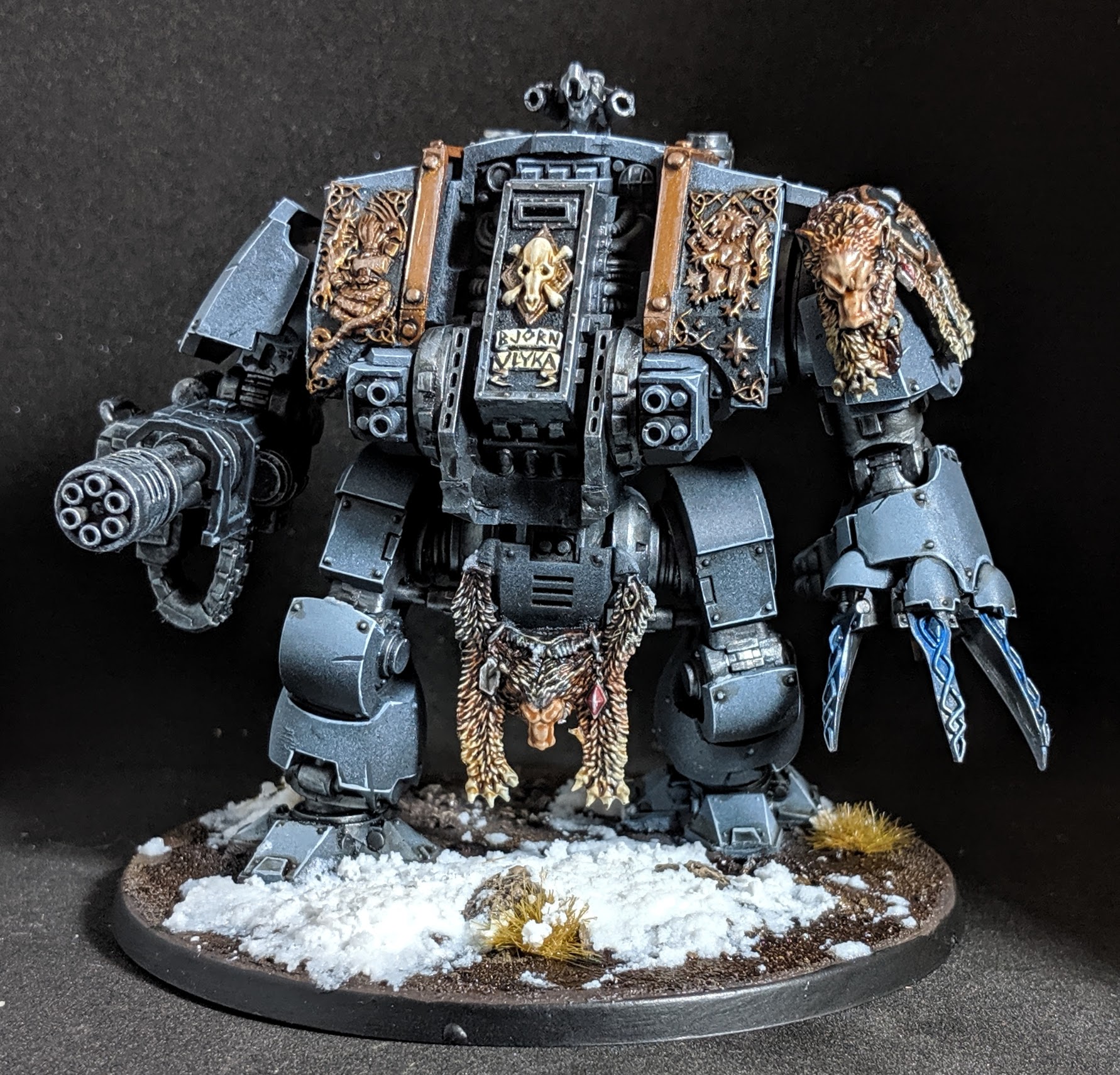 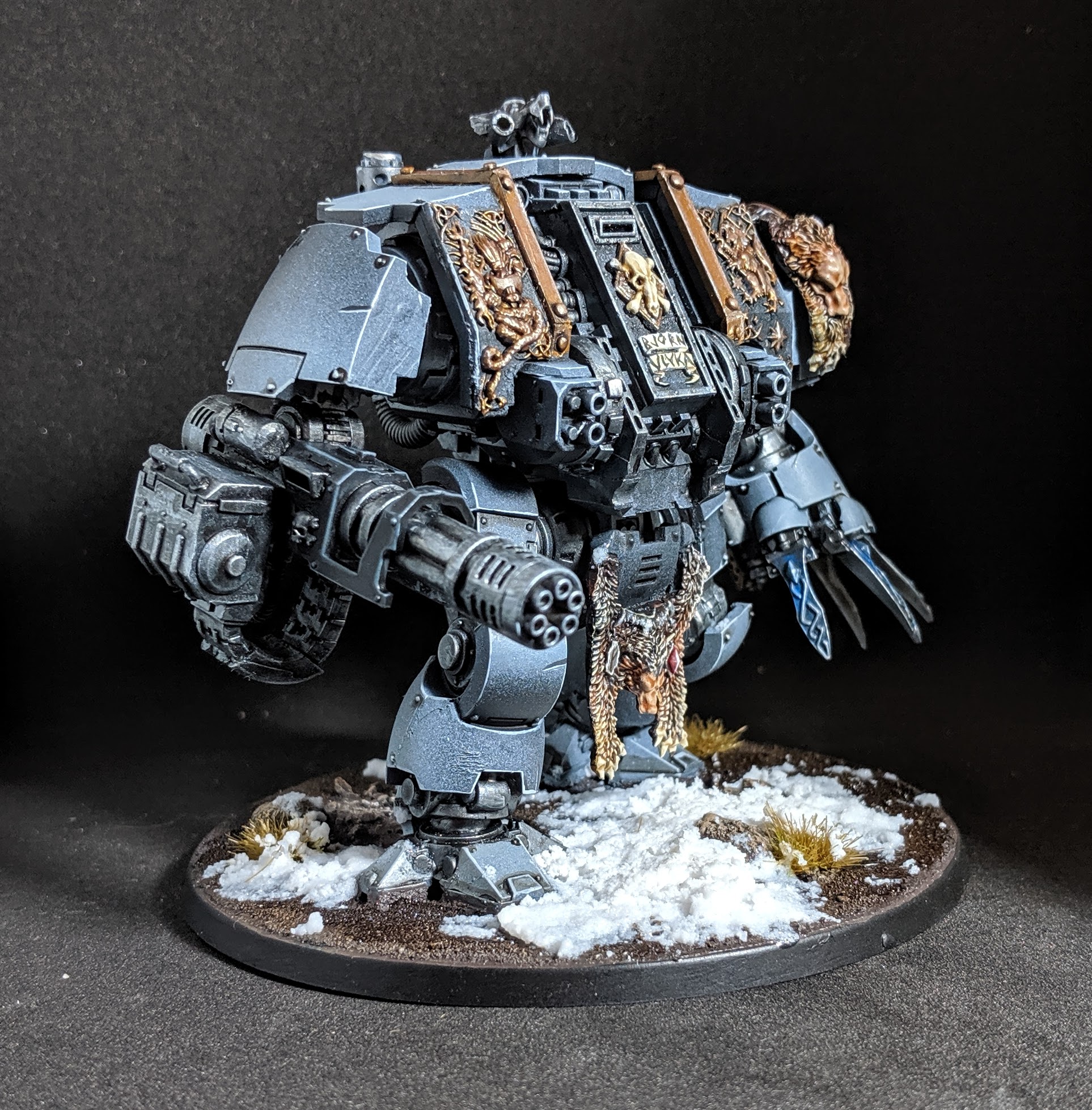 I'm not sure I've got the time or energy for a third vow!

Excellent Chazzmos! Not only you added 655pts to the SWs cause but you also secured your previous vow! Congratulations man!

I am bored of edge highlights, someone want to finish this spartan for me? 😂

Right calling the Spartan done! I'm most of the way there, Intercessors, Agressors, Dreadnought and Spartan are finished.

All that is left to go is the Landspeeder, a little bit of building to do, but nothing I cant get done in a week.


Thanks, I felt like he was a bit of a rushed job, think he is missing something, but I can't put my finger on it...
Hes done enough though so on with the landspeeder! 😂

That's what I have done. The issue seems to be while it's uploading into my gallery, some of the pics uploaded as huge images that don't fit on the screen, and some upload as normal.
I thought it might have been something I did before uploading, but all these images went through the same process on my computer, and at the same time. I duno.

It only seems to affect the website, the pics are a normal size on the mobile site.

And with this... I declare my second vow done! 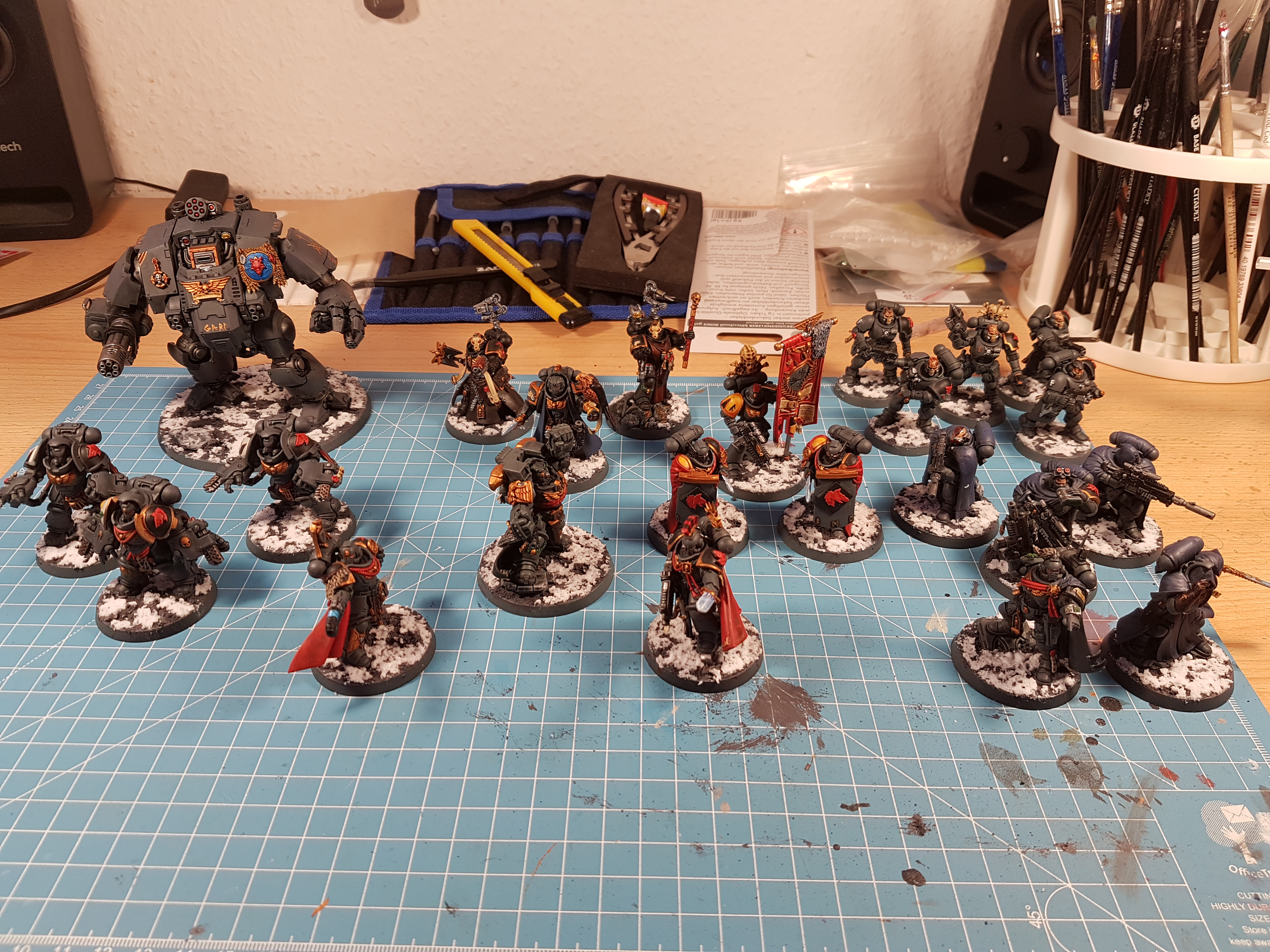 Close-up pictures following later this week.
Maybe a quick 3rd Vow too. Depends on the weather tho. Due to the new heatwave I was seriously slowed down, only able to paint a step or two on the Redemptor each morning.

Lol, so thats what the space marine action figures will look like, good job Yoyo, btw did I see your Spartan on Facebook?

Your models are looking great 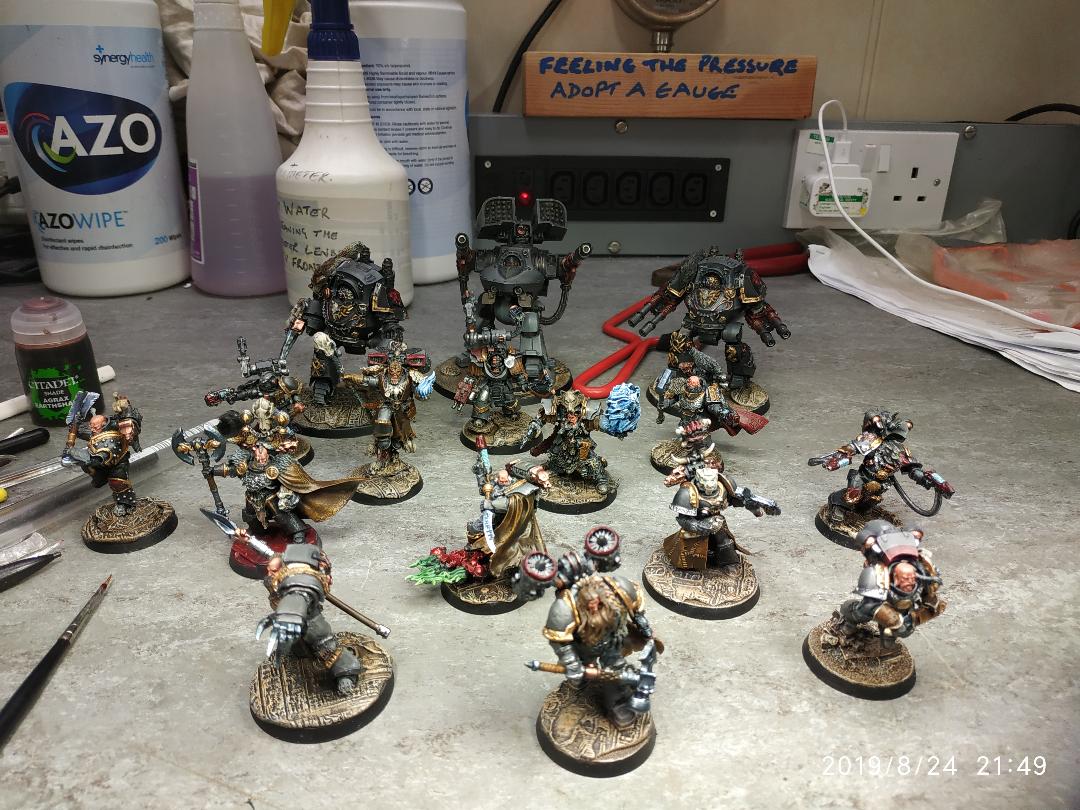 A nice groupshot of the gang. 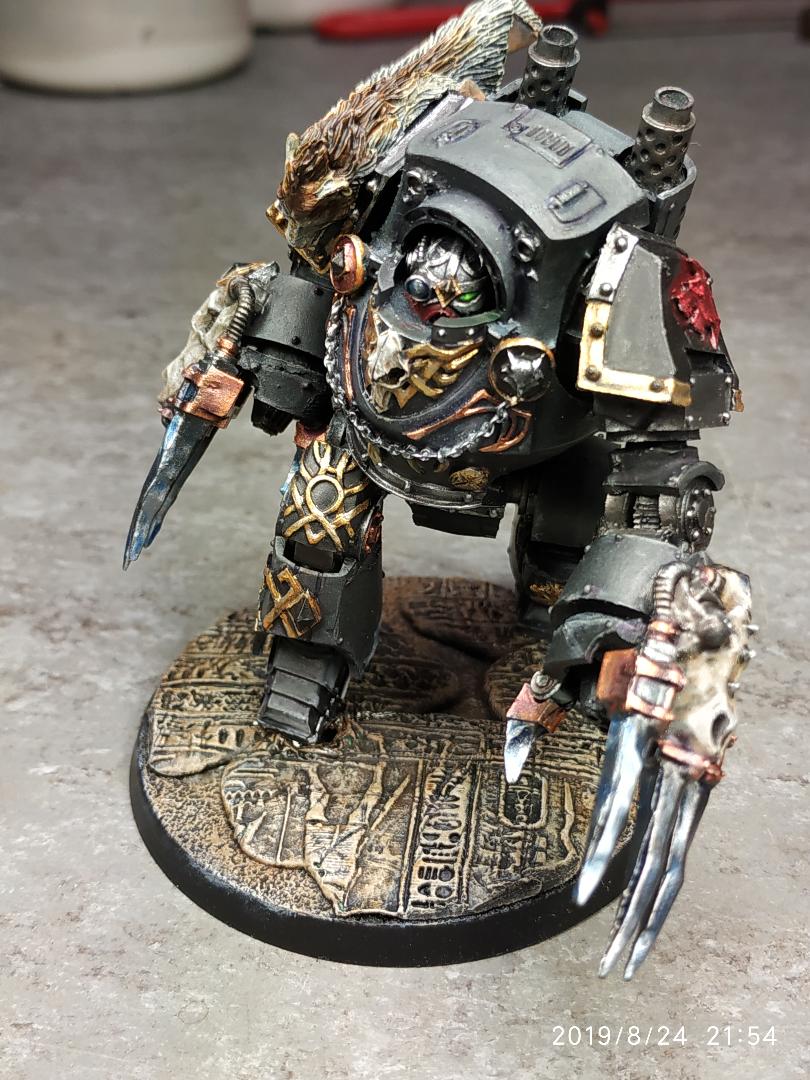 One of my favourite dreadnoughts so far... Got some work to do on the bronze, lenses and gems, plus exhaust stacks, then I can feel happier with him 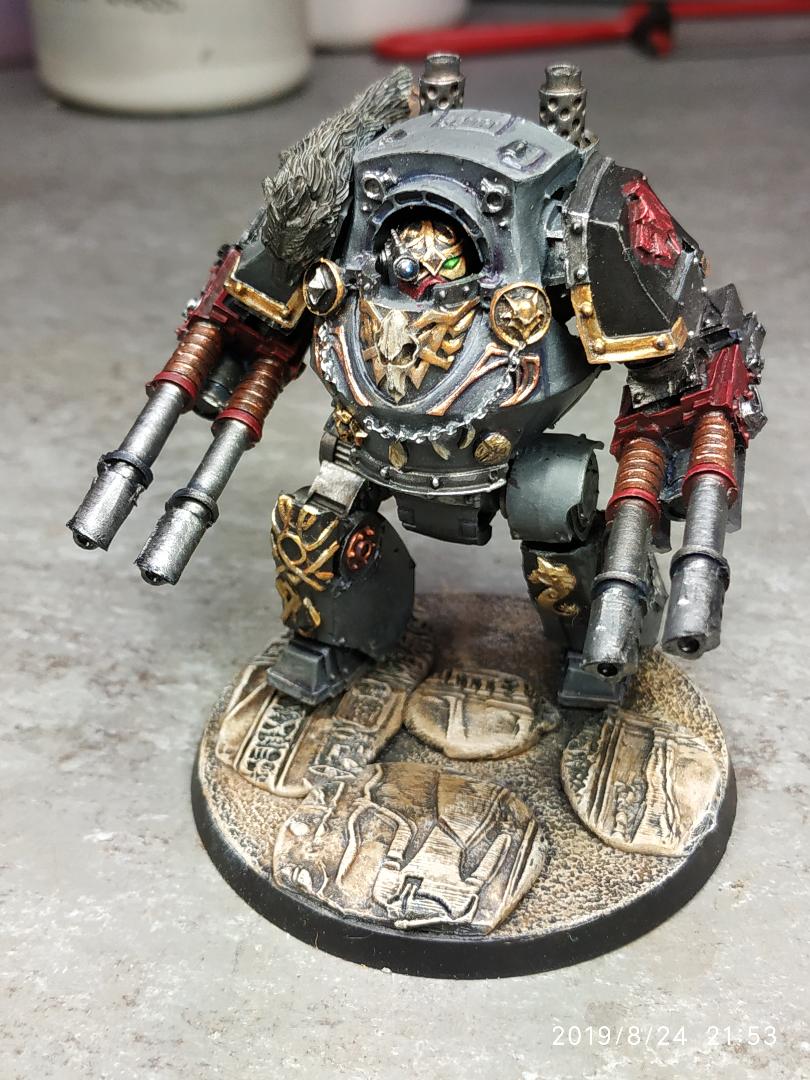 His shooty brother, same as slice n dice, then I can class him as close to being done. 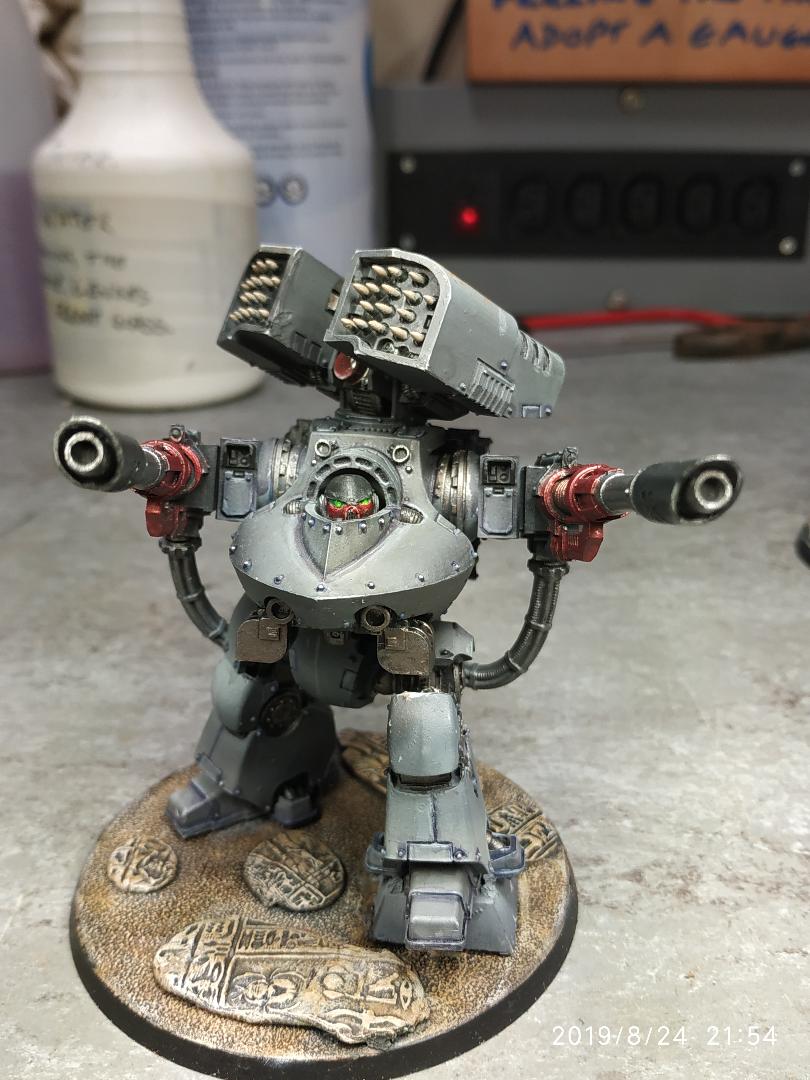 Still a long way from being done, but I have a few ideas I might be able to pull off 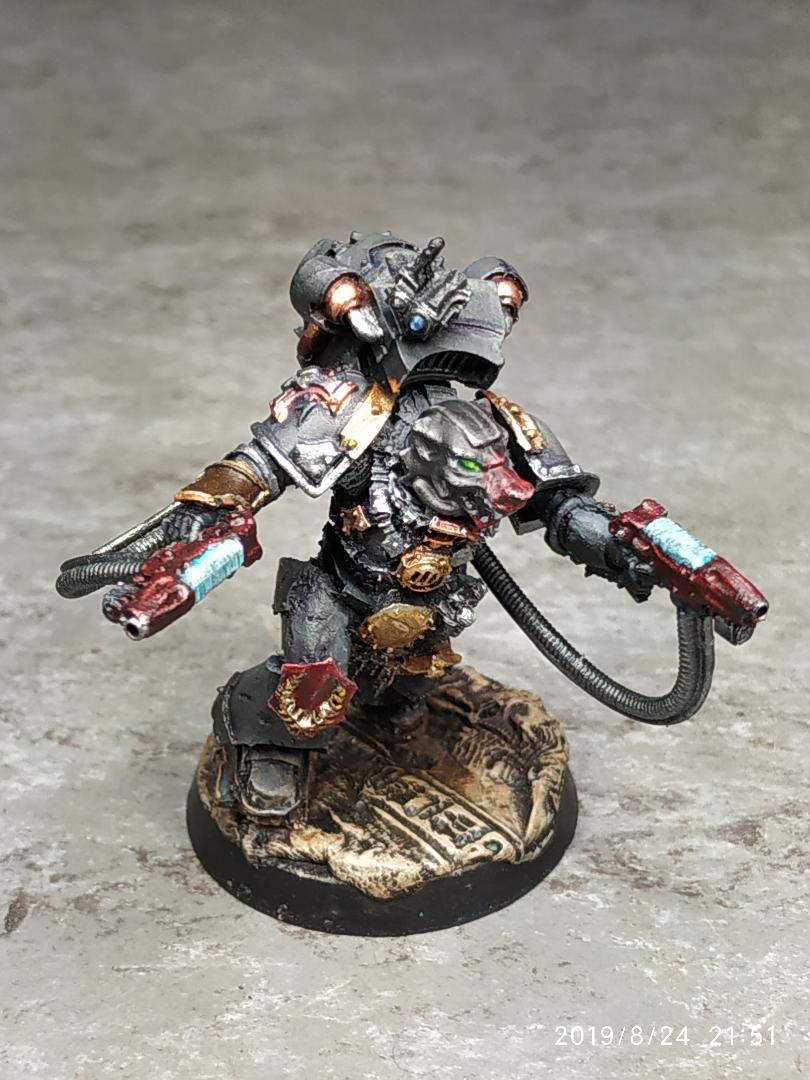 30K moritat, which I am painting for fun is almost there... Not sure you can have a gun-slinging wolf with jump pack in 40K 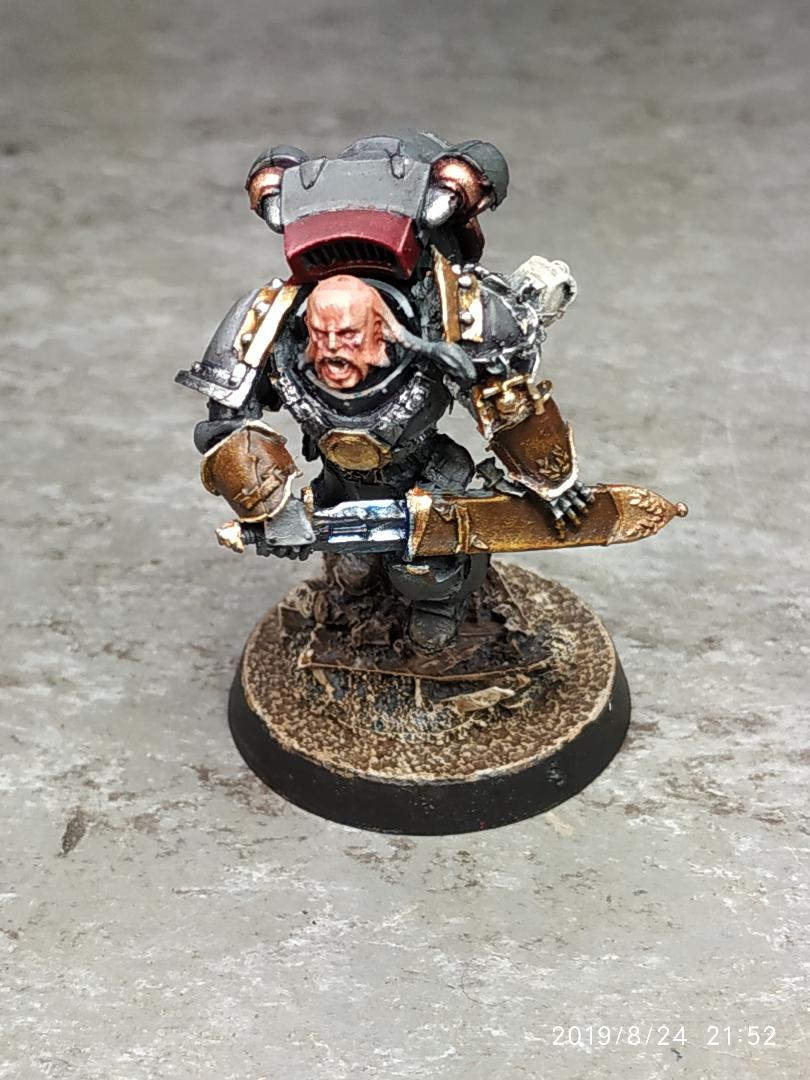 Hair, markings and tidy-up for this guy... 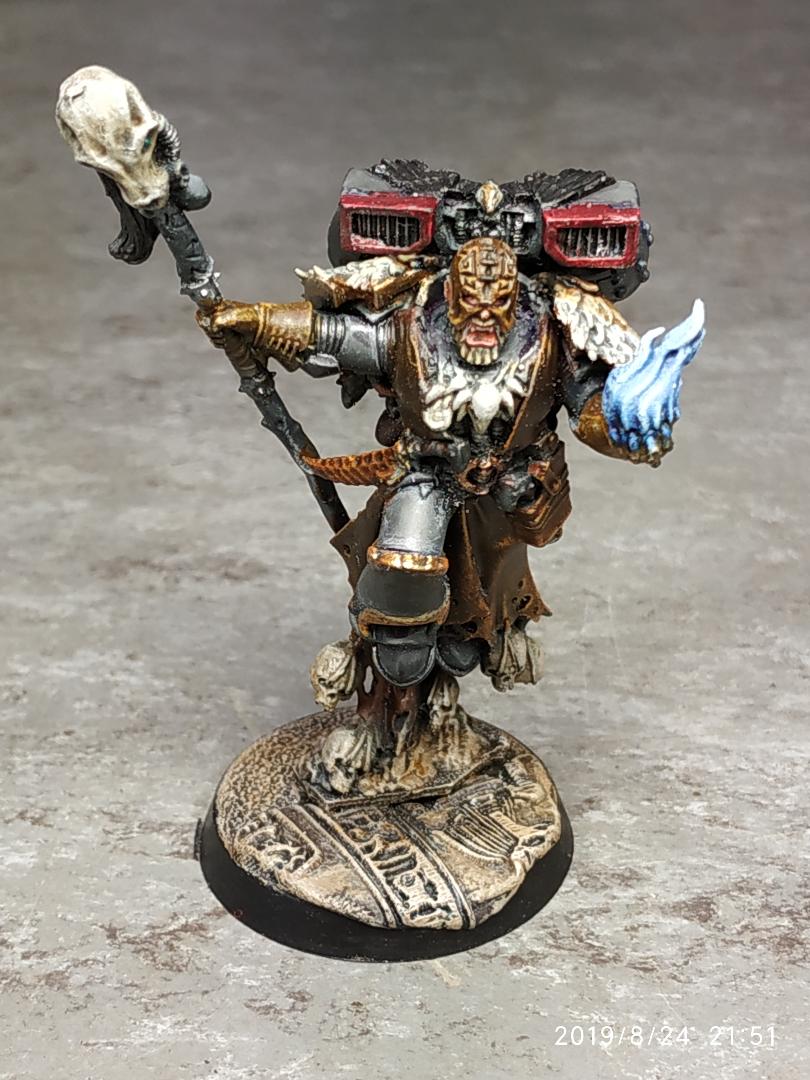 Staff, knick-knacks and tidy up for the acrobatic Rune Priest 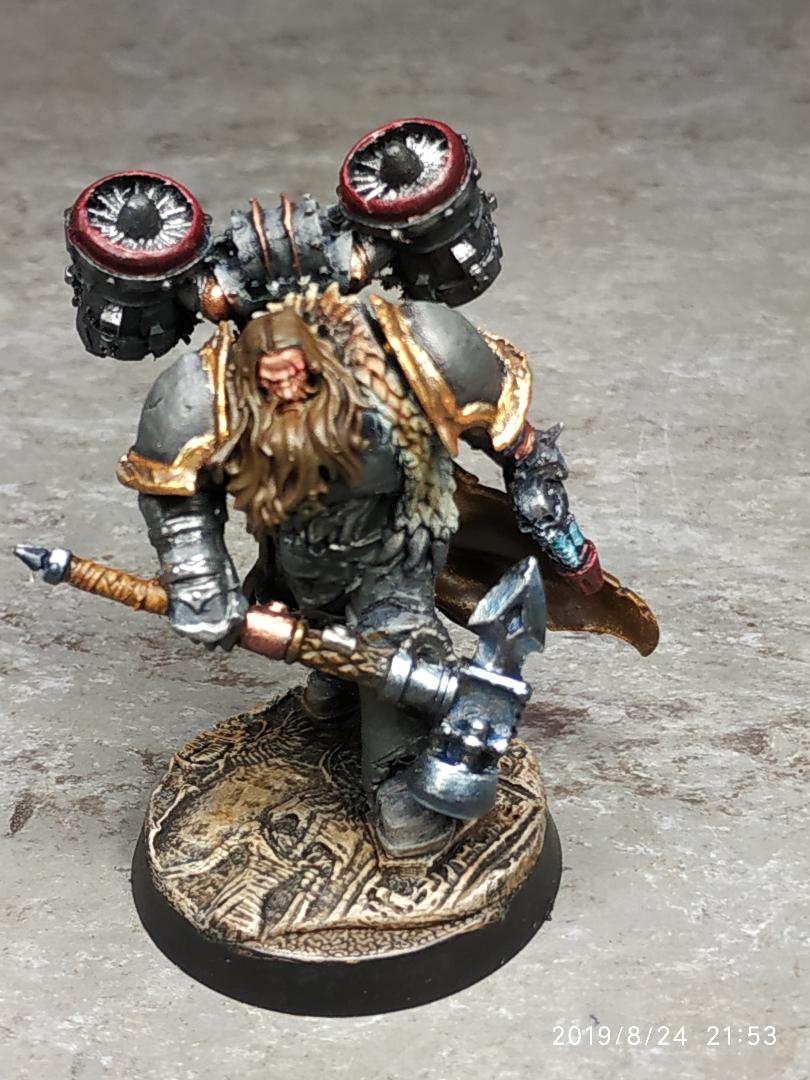 Hair, tidy-up, trying to work out what to do with the gut-plate... Also markings, what to do? Varagyr and command elements in 30K have red left pads with gold legion symbols, but this does not follow through to 40K. Also concerned the red would dominate too much.... Thoughts? 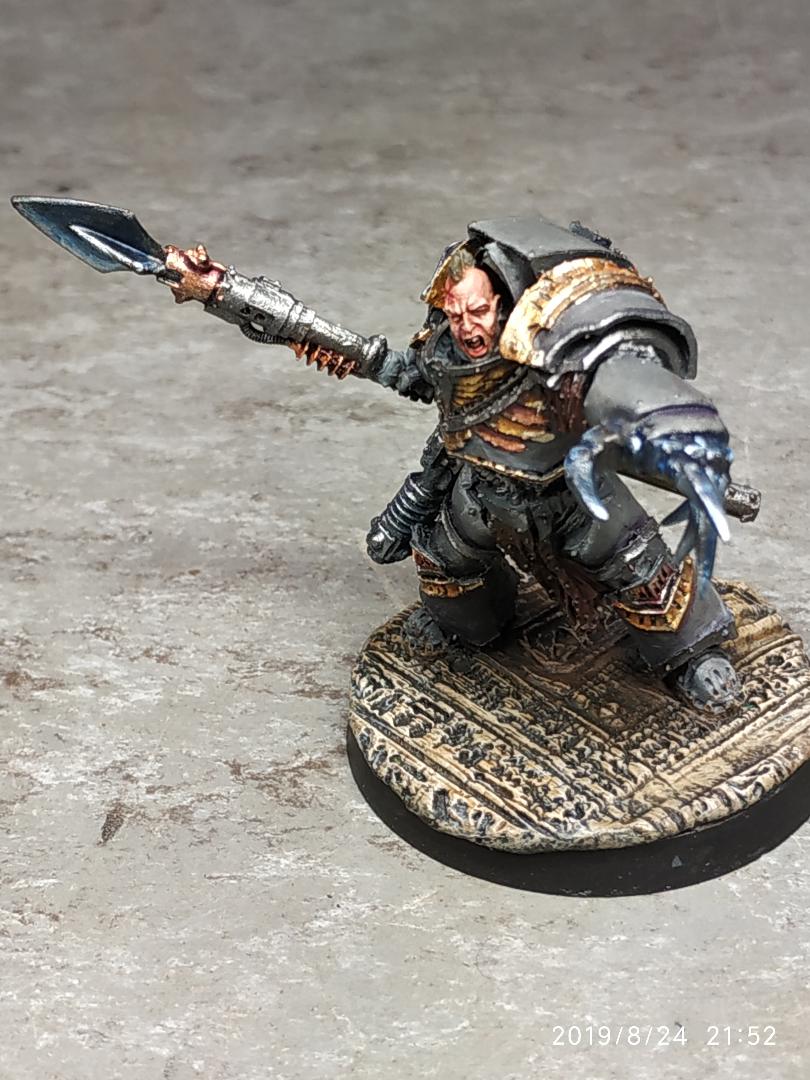 Same issue for the pads with this guy, need to do knotwork of the fist and re-touch up the silvers on the weapons

Markings, hair, doo-dahs... You get the idea. 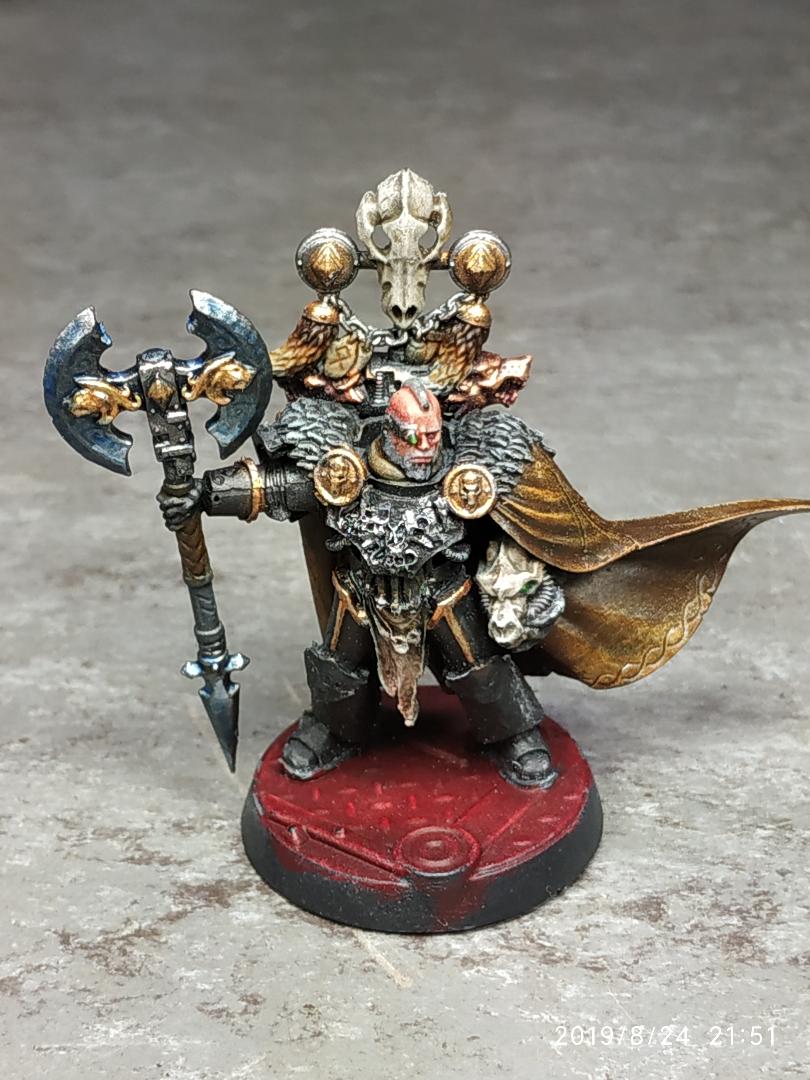 Hair to do and a few bits, neaten up the blades. 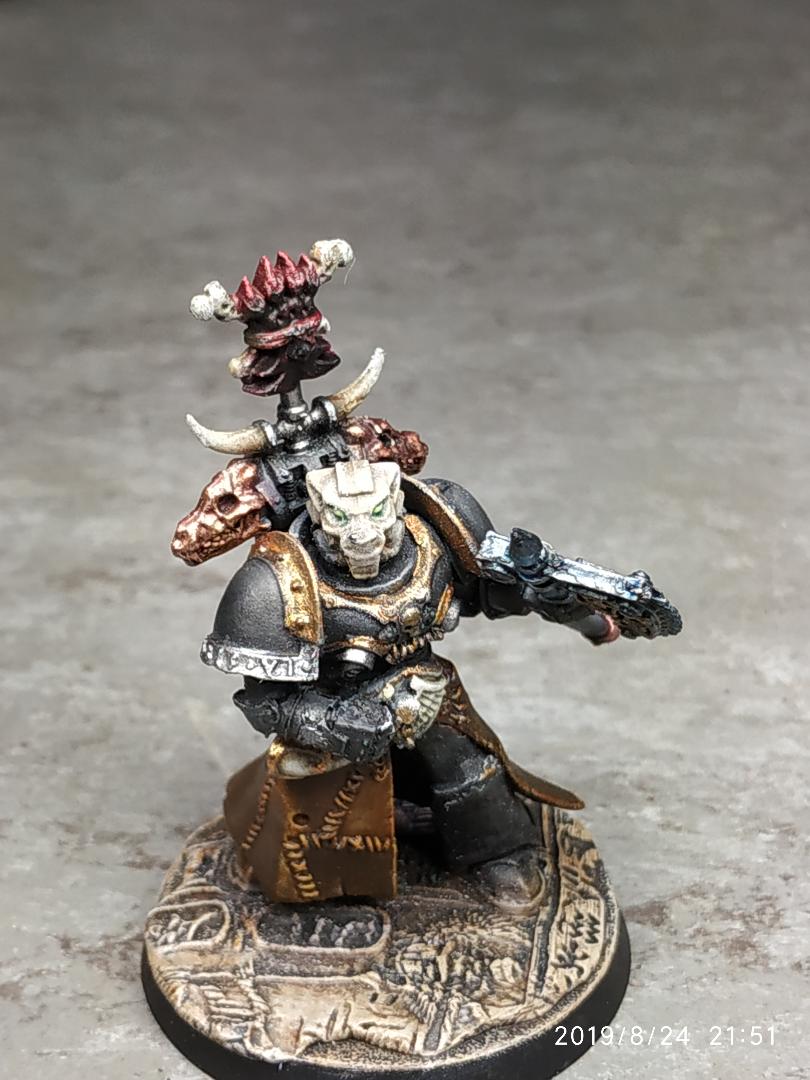 Run some sepia over the helmet for more definition... Should I do the red on the snout like the moriitat?? 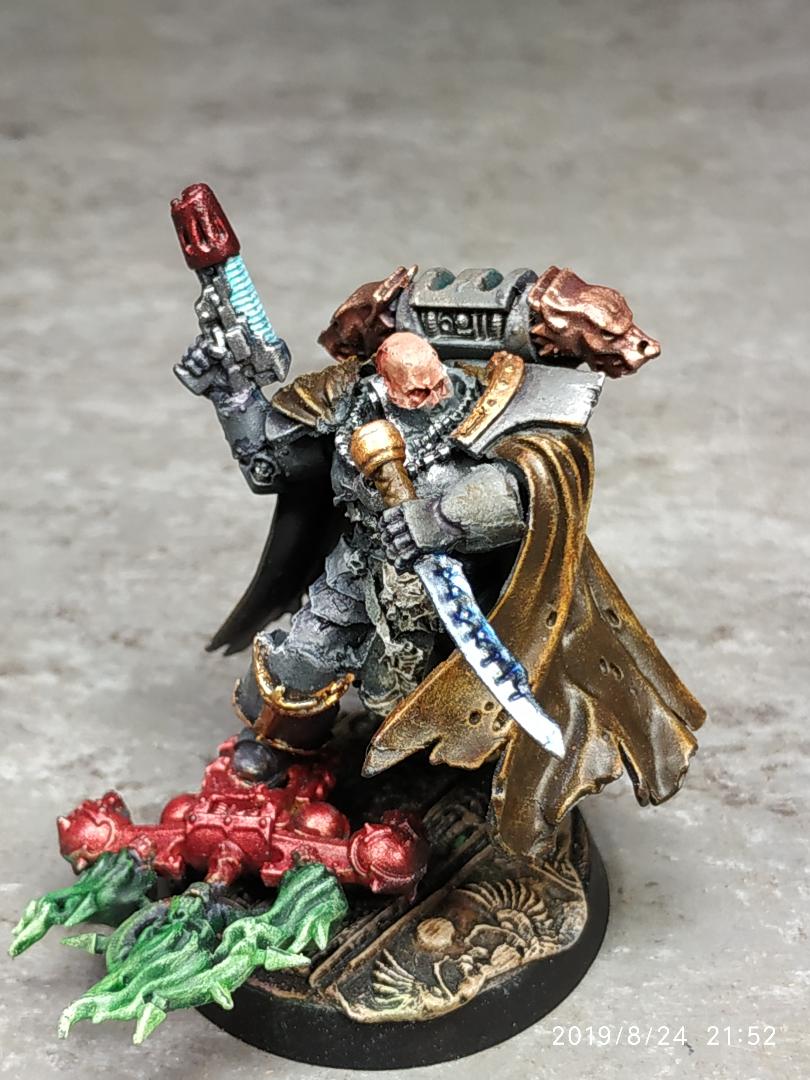 Some tidy-up on highlights and blade, markings face mask..... Something norse and in black to look sneaky. Finish backpack, but its not top priority 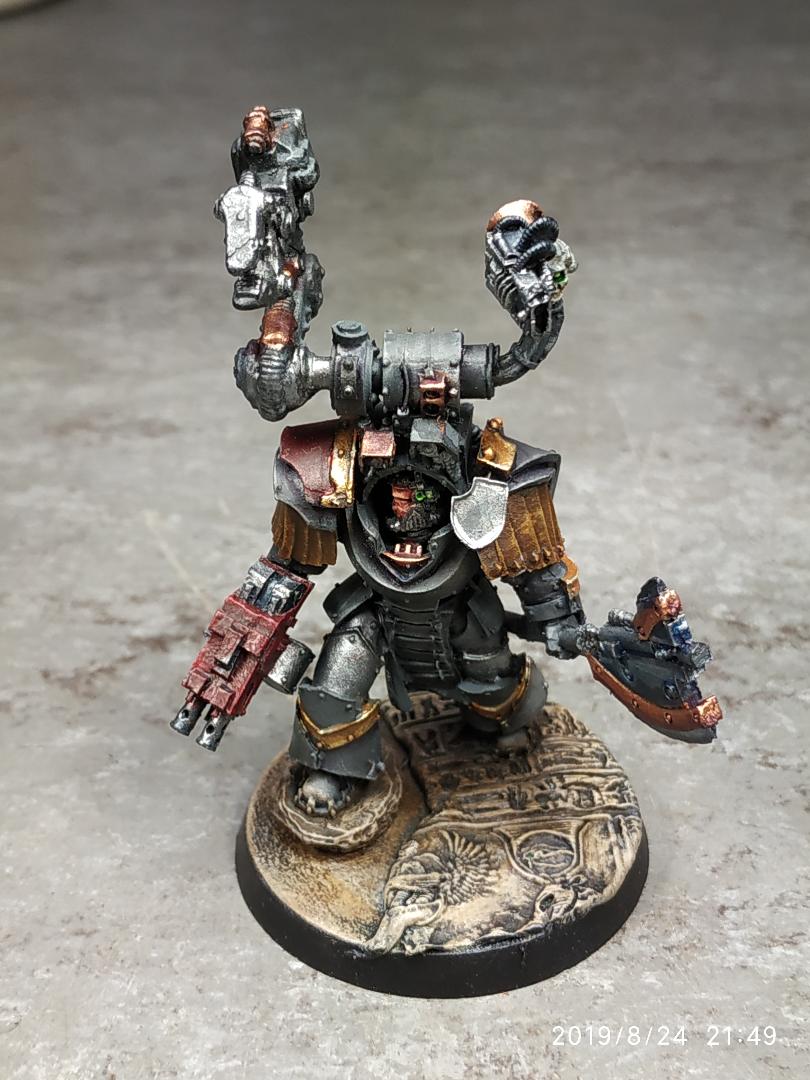 Tidy-up, makings, something for the wee shield, add some colour to the servo arm 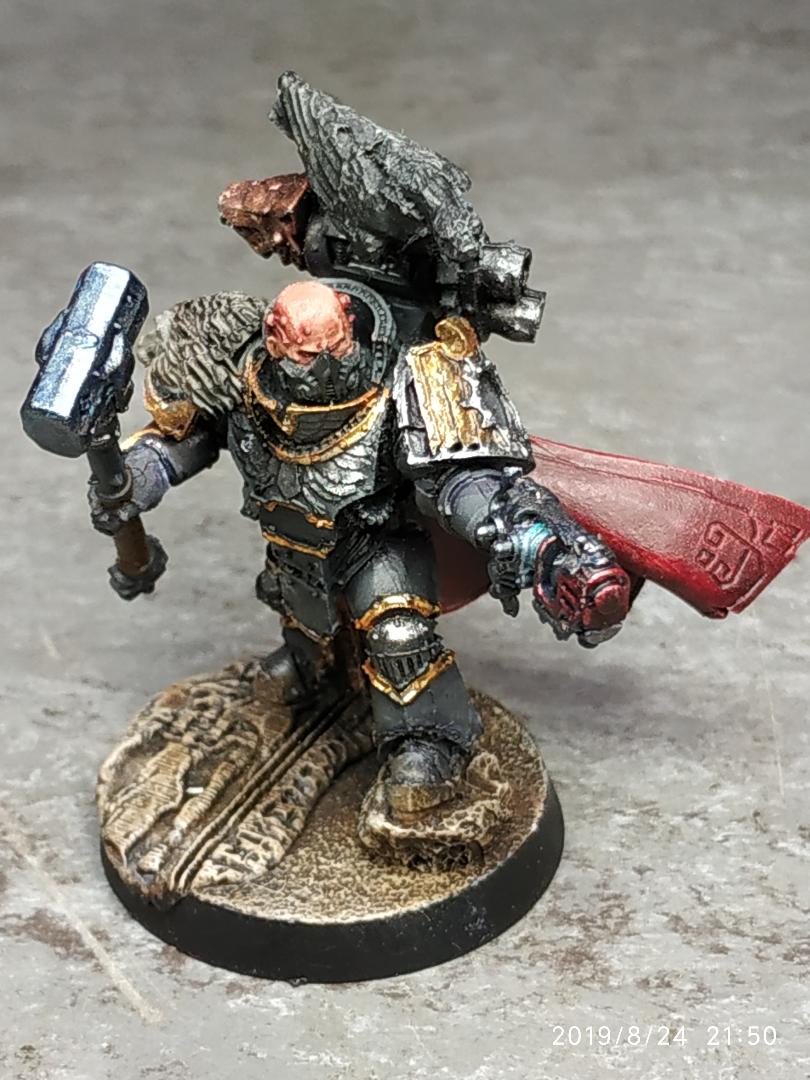 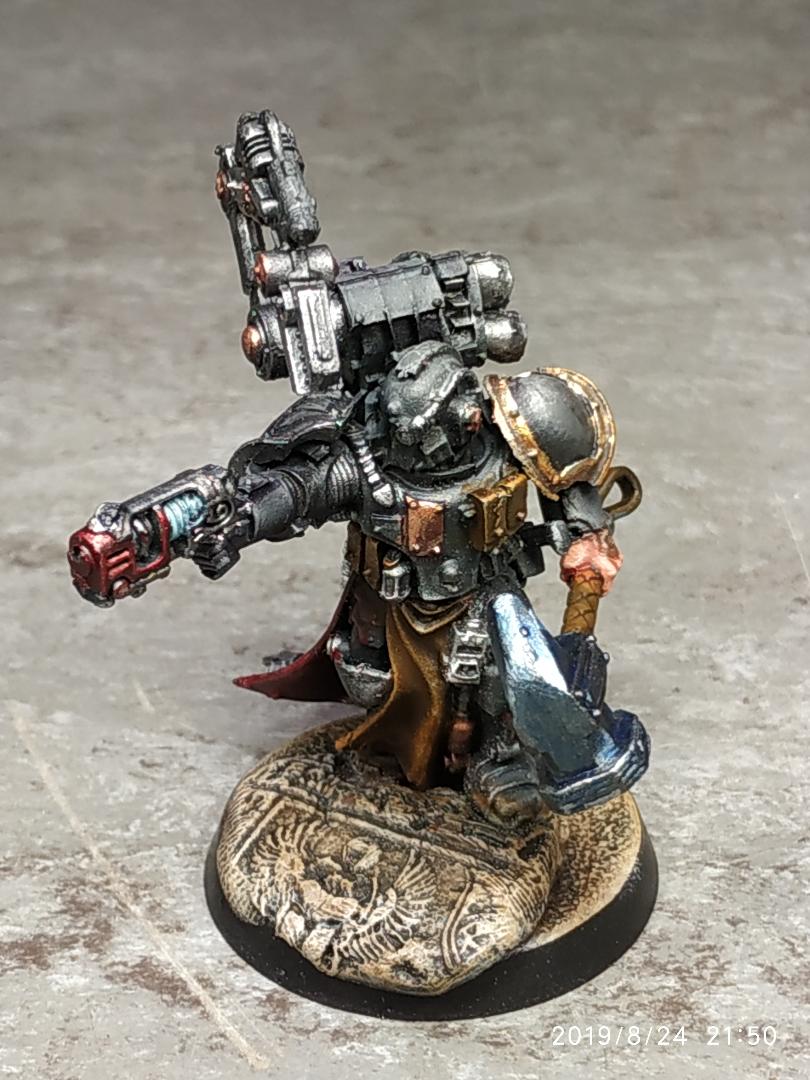 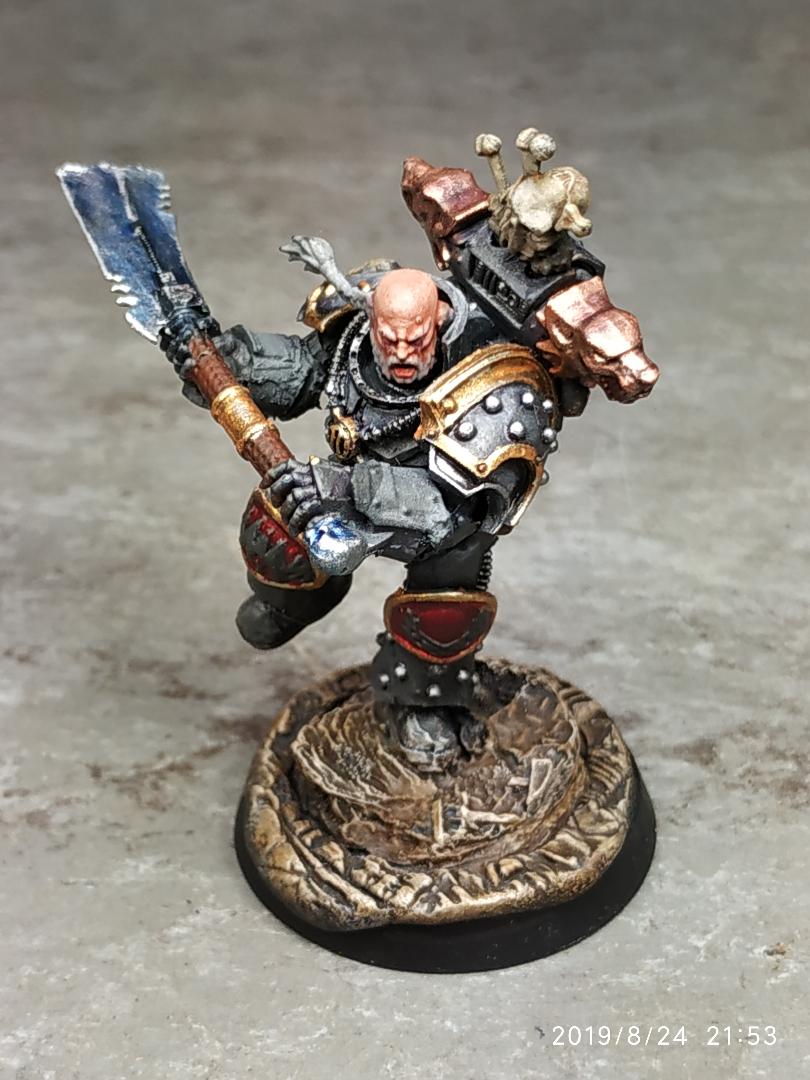 Hair, markings and re-do blade, really not happy with that.

6 user(s) are reading this topic