Yea, that's what I'm doing. I have a squad of intercessors done and I'm half way through my aggressors. Got a landspeeder, a ven dread and a spartan to go! 😂 I'm away this weekend, but I'm off Monday, so I think I'll finish the aggressors and air brush the vehicles, should see me back on track, I hope! 😂
I will not be an oath breaker!


That's good to hear! Keep up the good work!

Kinsmen, I am proud to declare my vow complete ! 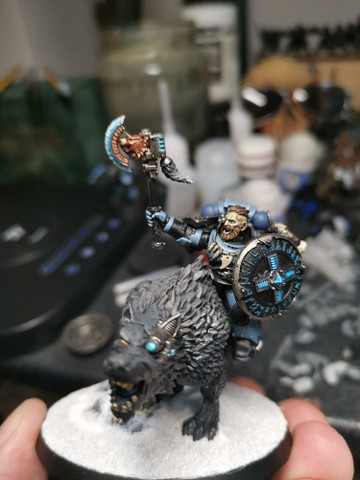 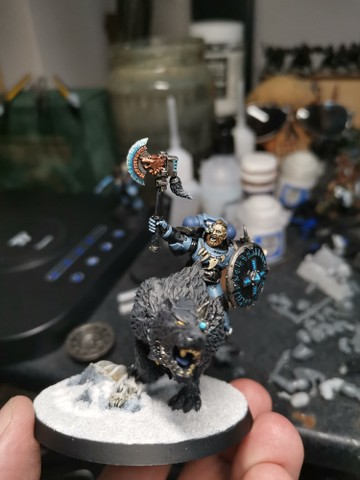 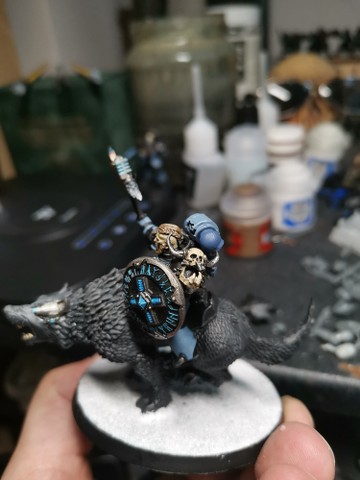 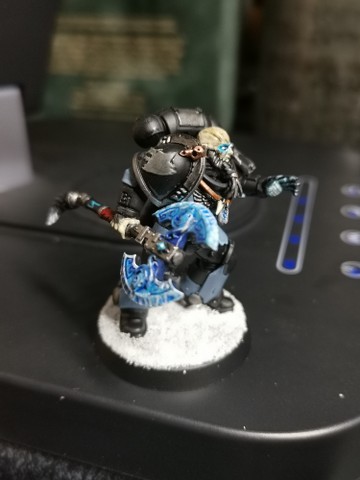 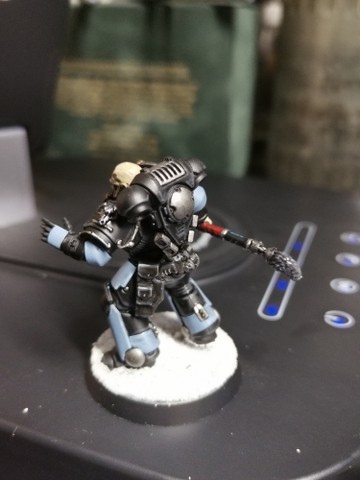 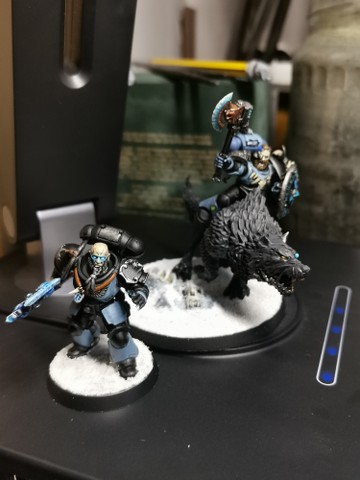 I raise a toast to you all brothers, may your vows remain steady and your glasses full. In a day or two Russ willing I shall return to these hallowed halls to vow again... Hjolda !

Reinforcements are due brothers and sisters! I UniWolf declare my 3rd vow!

This vow totals 549pts. May the doors of Valhalla be closed to me should I fail to complete my vow.

Excellent work Konnovaer - I think the Ice effect on the weapons is especially cool!

+++THIS IS THE CUT-OFF POINT FOR THE SEVENTH WEEKLY UPDATE+++

I like them both a lot. The black/blue-grey is quite interesting.

Thank you brother, I wanted to try out a new scheme for the primaris marines and liked the combination, appreciate the comment kinsman


Had a tourney weekend but I’m aiming to finish my vow this week and pledge again!

Well progress has been slow so far, and I am going off the rig tomorrow, so I expect not much to get done at home, although I do have something in the worls if I do get this vow finished

So this is where I am at/ 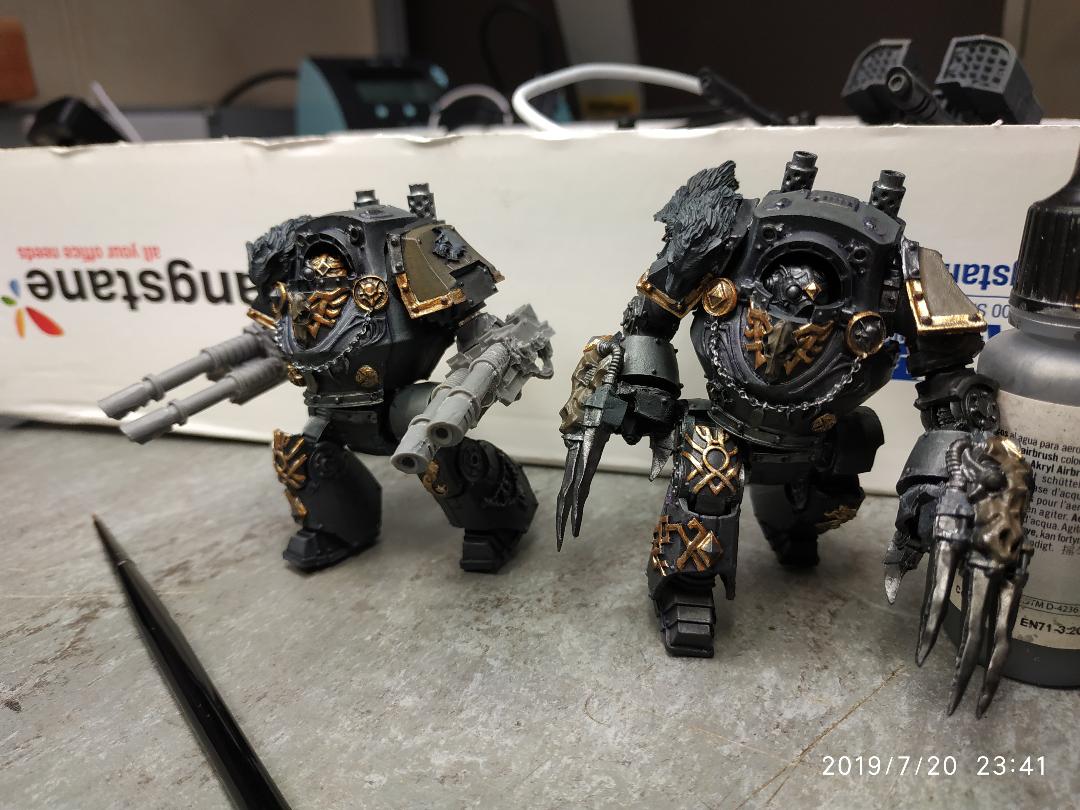 Getting there, trying wo work out if I want to do the shoulder plate black to match the artwork in Inferno, or off-white, as my leviathan has... Thoughts??

Still a lot to do on these, like the others, the steel and bronze needs worked on, then on to reds etc,lenses and skull/ bone details done. 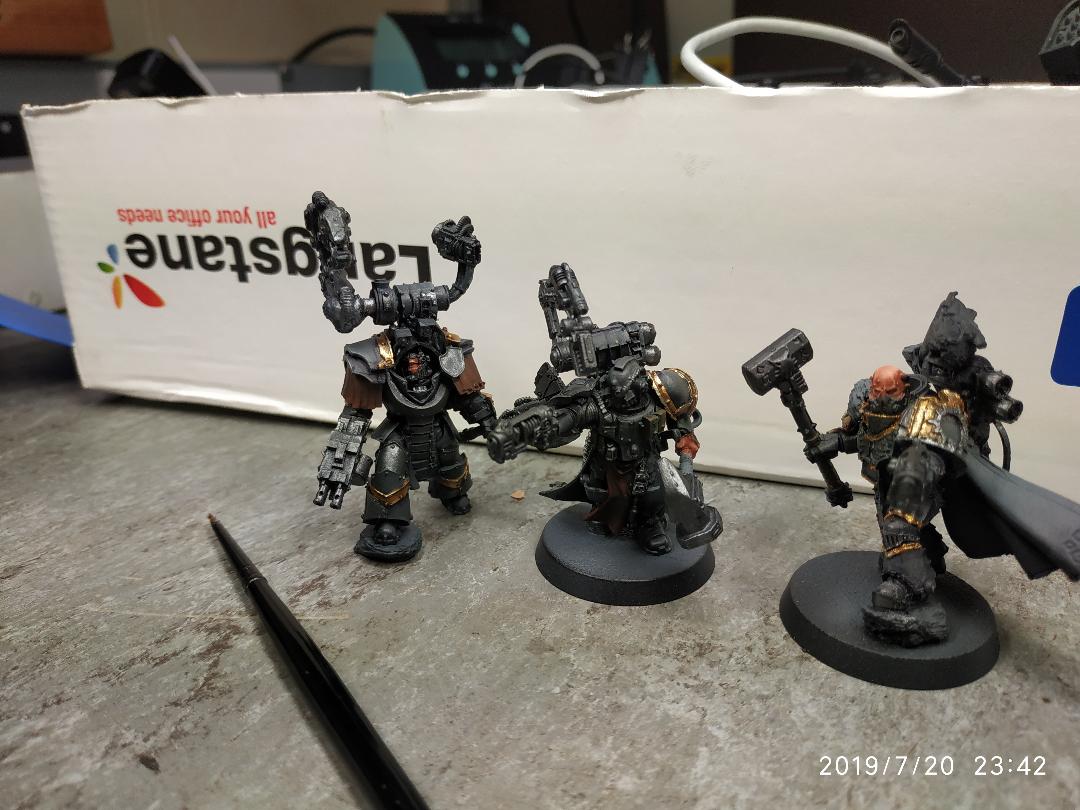 This is ano lder photo, so he is a little further along. 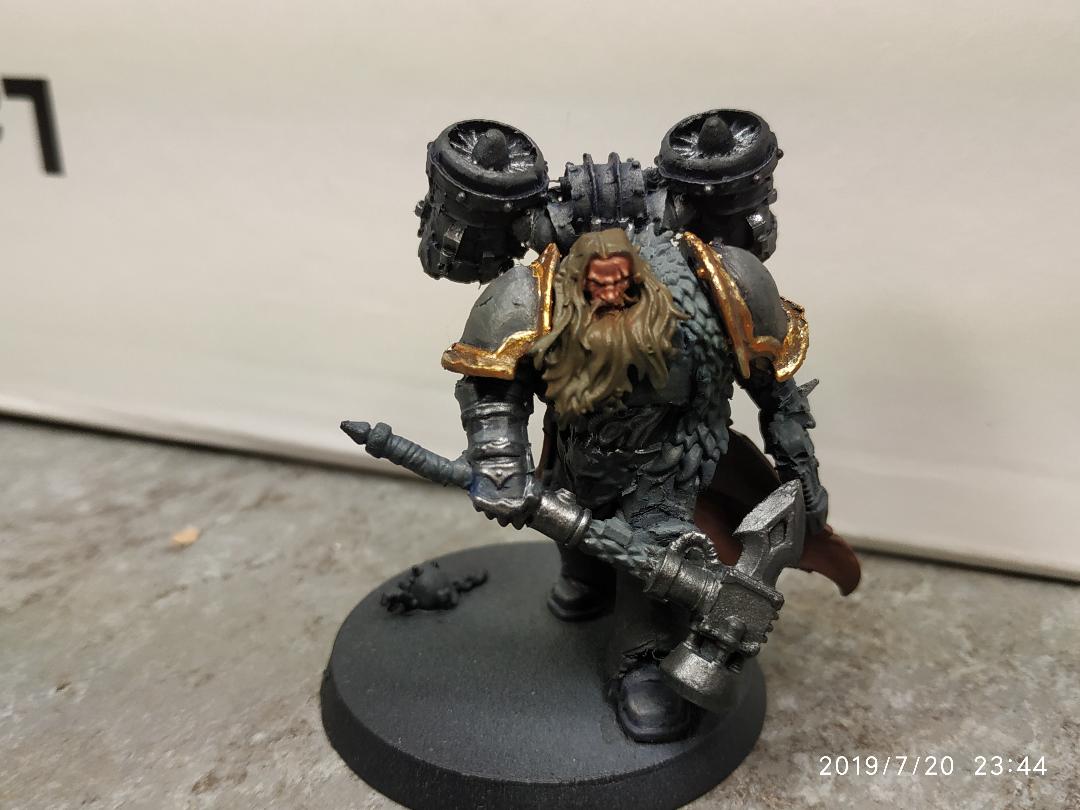 Ben asking on facebook if anyone has a wulfen shield going spare...so far no takers on that yet :(May end up sacrificing a grey slayer shield to get the vow over the line. 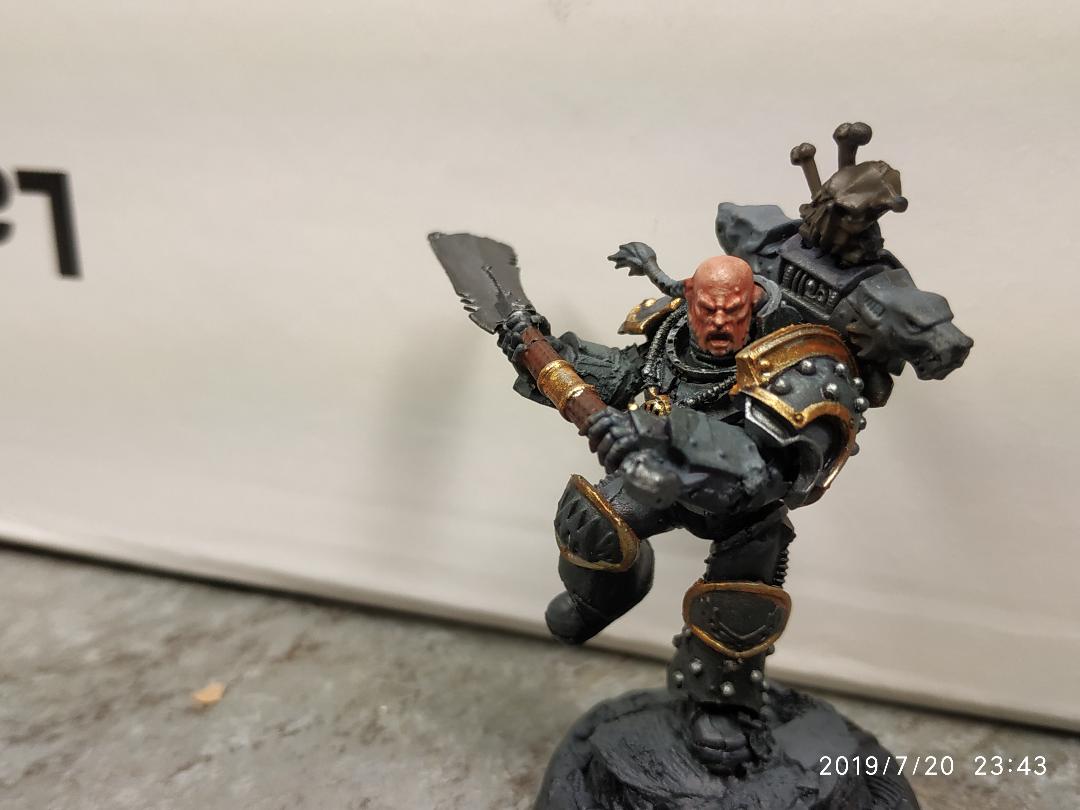 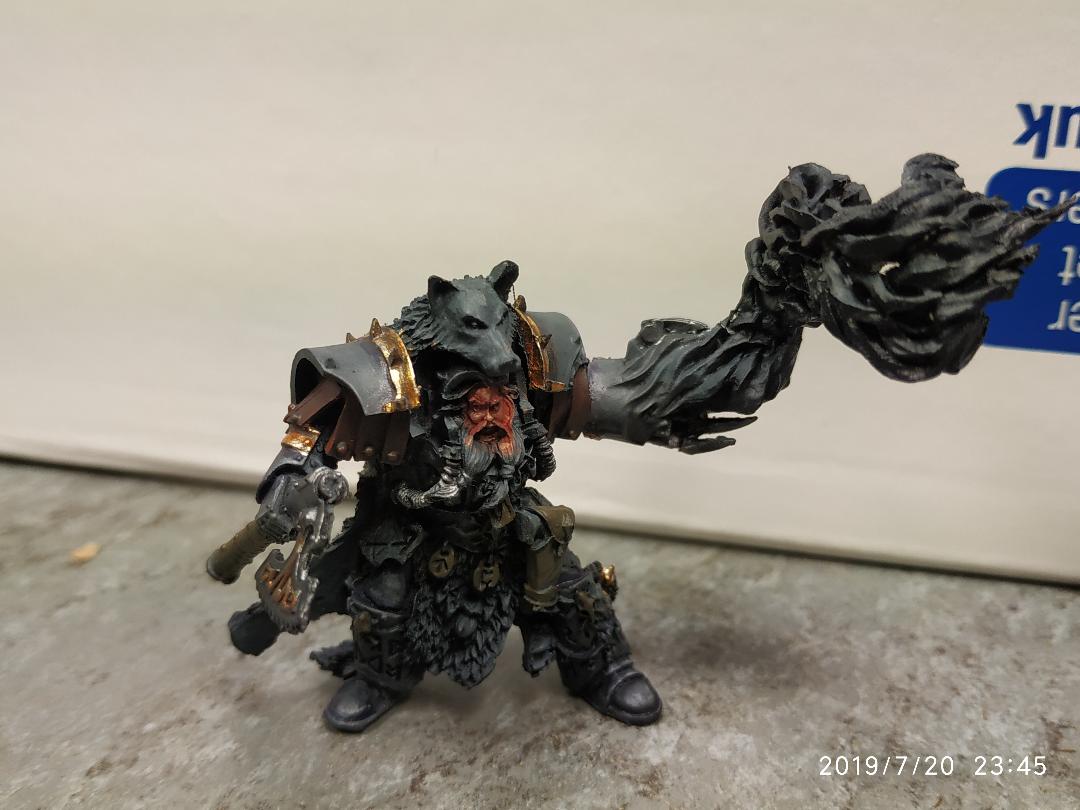 What colour to do the flames?Blue and white like a snow storm or traditional fiery death??

Really liking this guy the more I work on him... Hav definite plans to really do some reworking on him after ETL to give him more of a wolf flavour 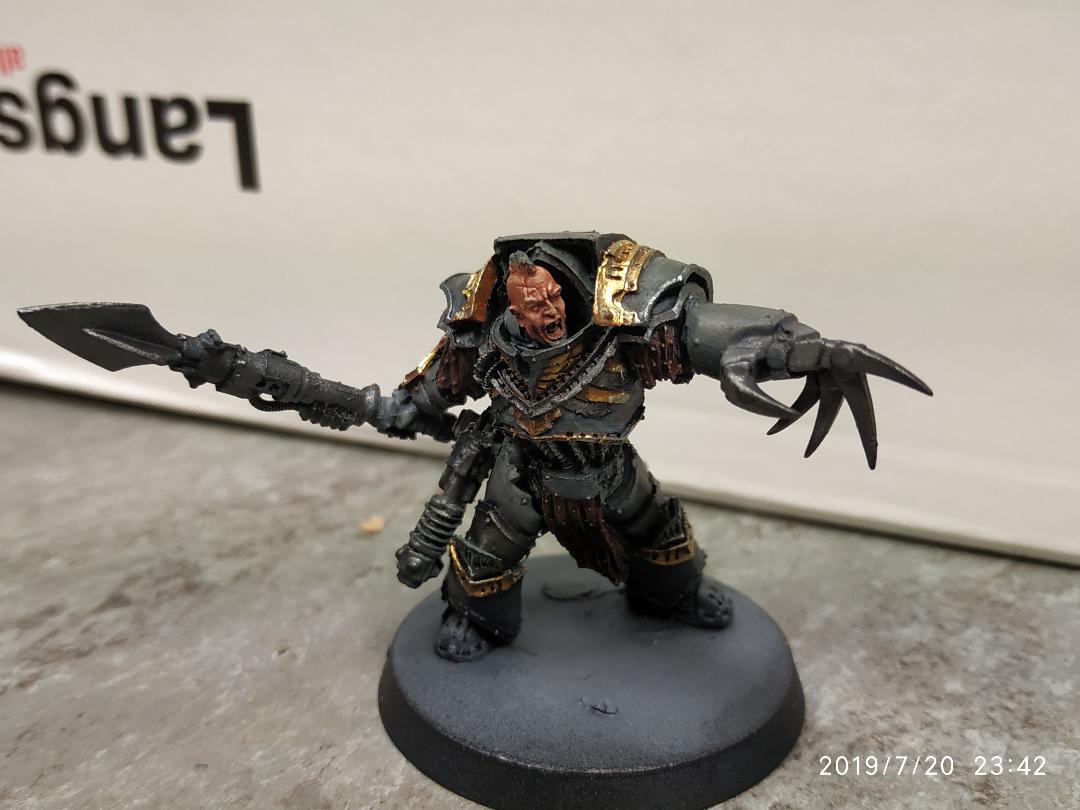 Trying to think f design ideas for the wolf claw, any ideas??

He is quite a bit further along, my biggest doubt with him is whether to keep the trim on the shoulder pad gold, or make it steel, as the gold is a bit blingy, thoughts?? 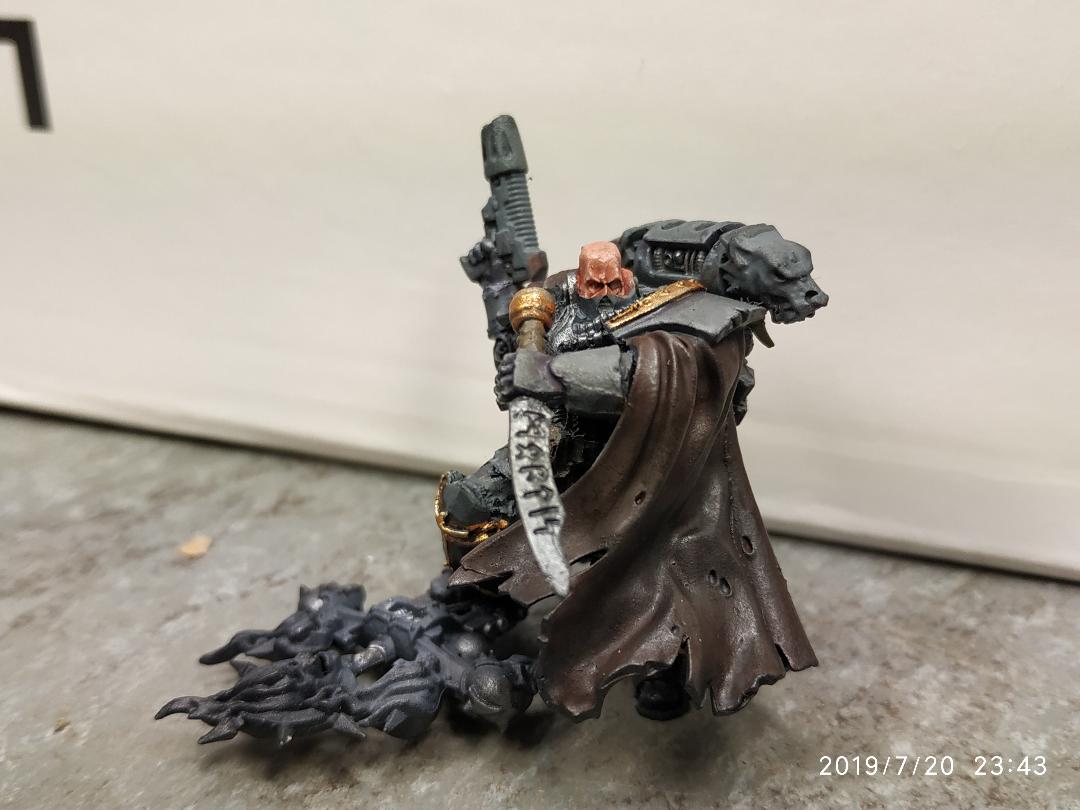 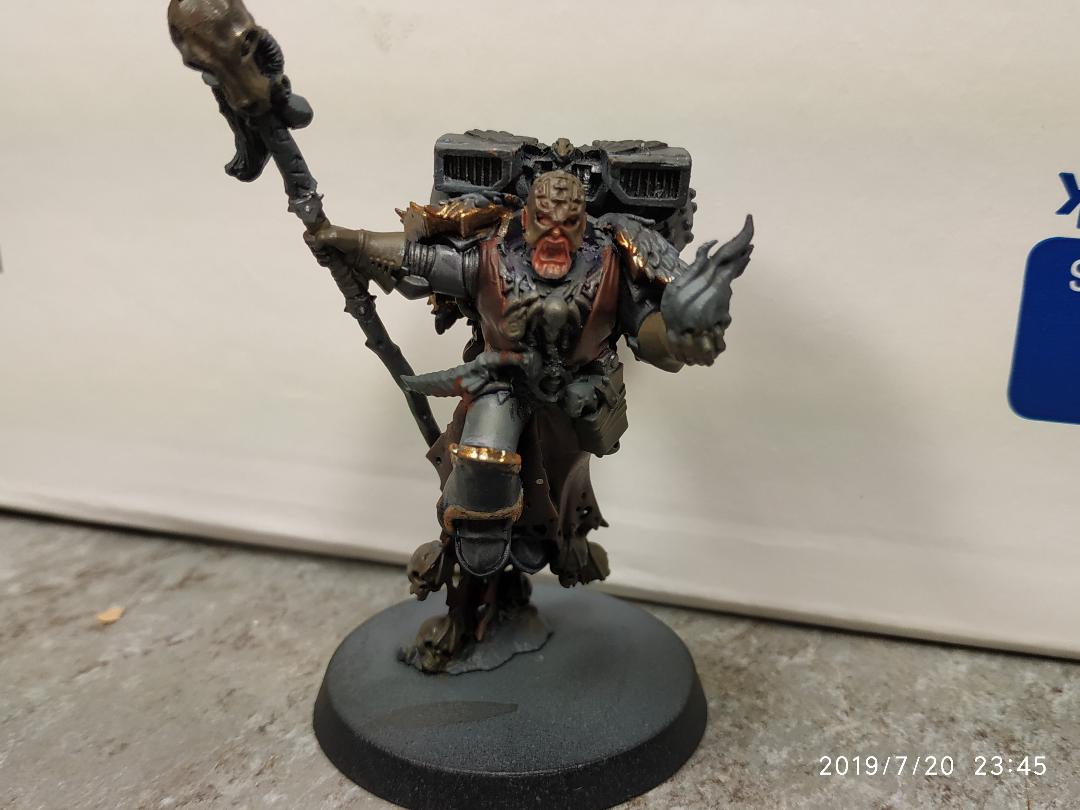 Gave him a raven guard jump pack and plan to giv him black hair, llight wolf pelt, and the feathers can be done in black to push the ravn theme, the only ting I am unsure of, s whether th skulls all over the place are a bit too chas-y?

New priest on the block

Not too much work here 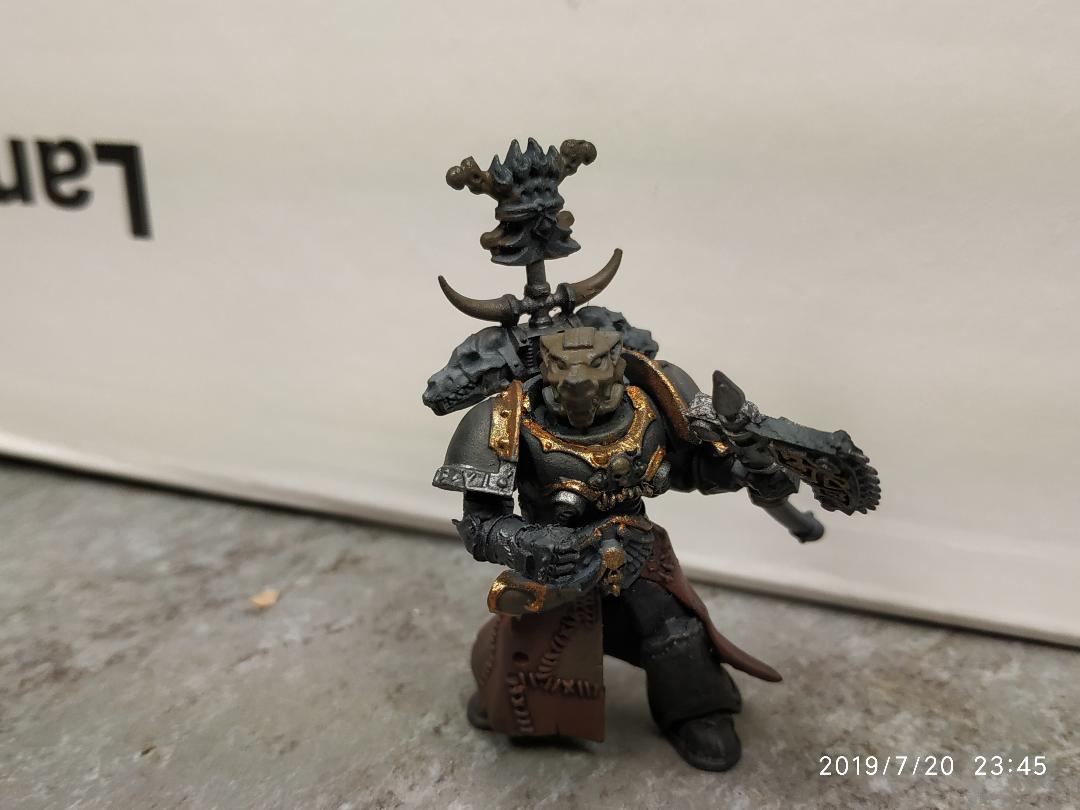 Got rid of almost all the bones etc, as I thught it was too OTT and have dcided to paint the wolf helm as bone instead. May switch it for a KF studio helm, still undecided. Thought hte varagyr axe would mahe a decent crozius counts as

This model is giving me a severe painters block, and not sure what the heck to do with him 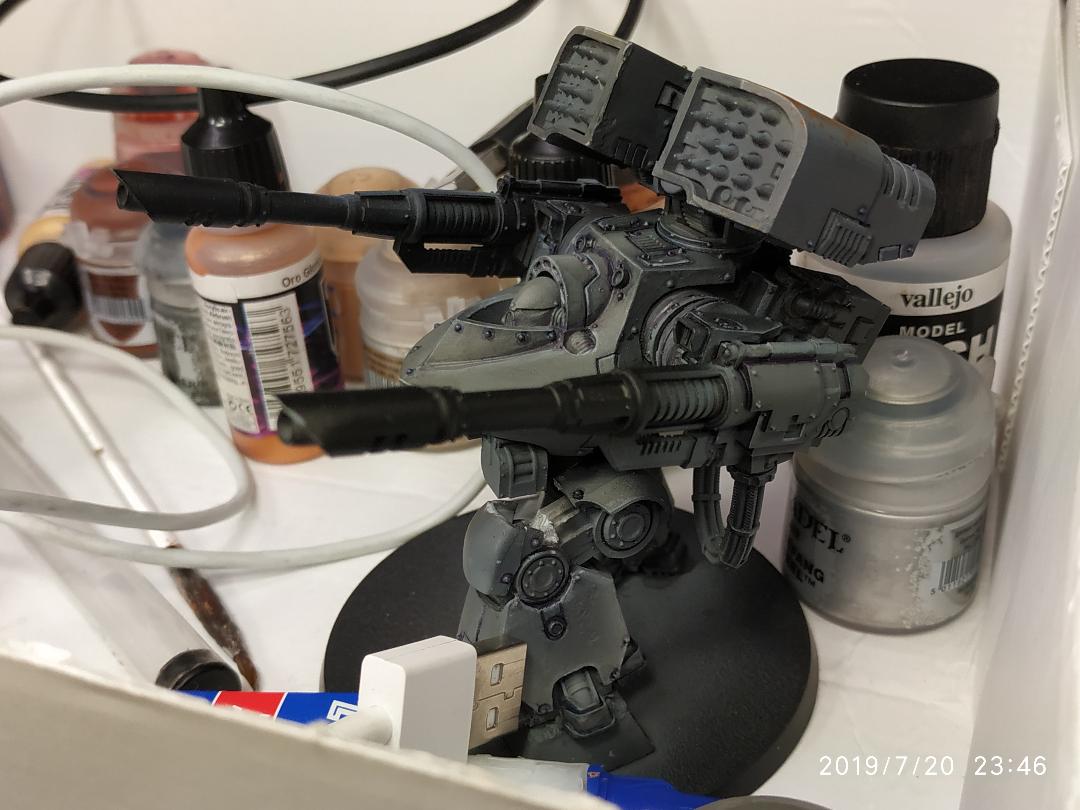 I am thinking knot work, just struggling for ideas or themes for him... Quite like keeping him in muted colours, almost like a mammoth sniper... Ideas apprciated for this one.

Not codex compatible, but a  fun side project... 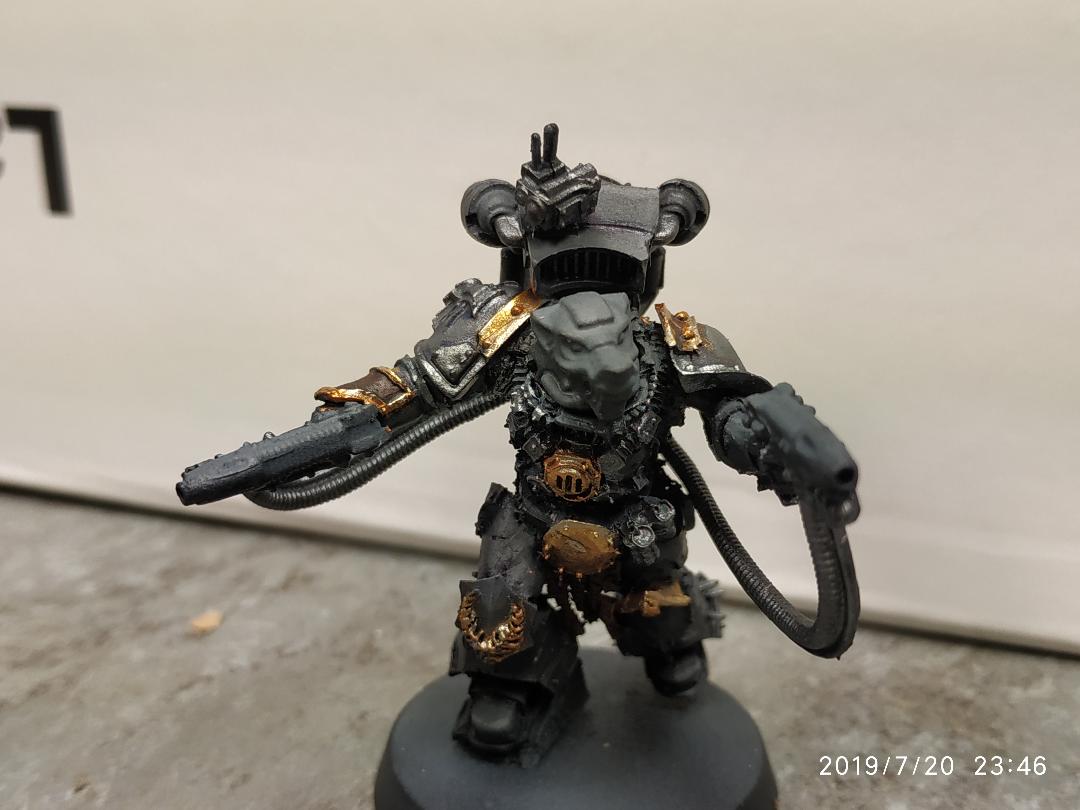 Ah shoot, have another wolf pries, but forgot his snaps.. Will dd in from home.

I'll be doing a mad dash shortly. once I finish up my studyingm might pull an al nighter or two to get everything done.

Wow, Dantay, these are some impressive minis there! Love the grey - instead of the blue-grey - and it seems you have a uniform progress (more or less) across all your models. That means that at some point there will be a big boost in the SWs Forum!

Yes. It looks slow because I will try to batch paint the same colour across all models before moving on.

So 3 hours painting in 1 evening is really just 15 minutes per model per night.

Loving the JumpPack Priest Dantay. Thats a fantasic use of the model, don't worry about the skulls it looks in no way Chaosy. Hmmm now you've got me thinking.

Ok vow completed, One IronPriest completed for the glory of the Rout. On holidays for the next week or so, not sure if I'll get to revow. Best of luck to my fellow Pack keep up the good work.

Guys, you really need to speed up - your completion rate is only 16% vs. the ETL average of 30%. Given your situation, I'd expect an above average completion rate by this point. C'mon, you can do it - there are a lot of quick wins in your pool! I sure hope we'll some more completions before the weekly update!

@ mactire: Congats on your completion mate - a reliable Long Fang you are!

Sorry brothers and sisters, the real world has consumed my time of late.

My glacial progress is unworthy of the results shown so far.

The month of July is largely lost to me. I will do what I can to make my oath.


Space Wolves are badasses that operate just barely within the rules. 13th Co. didn't even know there were rules applying to how badass they could be. DepthCharge on the Space Wolves

I declare vow of one WG in Tartaros TDA pack completed.
Pics are clickable, but quality is poor unusually, even for me.

Sicaran is done, pics forthcoming! Unfortunately I totally forgot I pledged the wolves...

I’ll likely miss tomorrow’s cutoff because of those but I should have an early completion next week. Hoping the have the revow shortly after. Just need a few finishing touches on the land raider.

Excellent completion mercbat, great looking Tartaros there... Any chance for a bigger pic?

+++THIS IS THE CUT-OFF POINT FOR THE EIGHTH WEEKLY UPDATE+++

As I promised - individual pics of reasonable quality
Too lit, but I'll try to manage it later
Pack keader

Full squad of infiltrators including a helix adept

The CQB squad has drank from the water of life.

Their senses are extraordinary even for the sons of Russ

I was inspired after seeing Konnaver's awesome black/blue scheme and redid my guys.

The colors don't show up well in the picture but I based with mechanics grey spray then did alternating armor panels with abaddon black and eshin grey.

I also decided bright red was too much for what I consider a stealth unit so I swapped it to a black gun scheme.

The 1 thing I don't like is my wolf lord helmet.  I liked the pure white but it didn't match the painted model.  I tried a random color scheme on it and decided the dirty/muddy look is just "ok"