After a substantial hiatus, I've been inspired by the beautiful new Chaos minis to get back into the hobby! I'll be building and painting up a force of one of my renegade Chapters, the Black Hammers - http://www.bolterand...s/#entry5327341

I've recently picked up my first squad for the project, a box of the new Chaos TDA, which has tied in perfectly with the start of the ETL, leading to the following vow:

I, Lysimachus, rise to the challenge of E TENEBRAE LUX on the side of the Black Hammers Renegade Chapter and to the glory of Malal* and vow to complete a unit of 5 Chaos Terminators of total value 214pts on or before September 1st, 2019. Success will bring me eternal glory and failure will doom me to wear the Badge of the Oathbreaker until the year-end.

(Maybe my completed vows should count against the Forum total???

The squad is built to be fluffy/semi-competitive, with 4 combi-plasmas plus a reaper AC (should complement the plas reasonably well, but more for rule-of-cool!). CC weapons are also meant to be a mix of effective/cool, with 2 chain axes, a chain fist and power fist and a LC on the unit Champ.

As a side point, I managed to get one extra combi-plasma bit but had to make two more from my bits box, using the plas attachment from the Tac squad combi-weapon for one and a cut down Sternguard combi-plasma for the other, plus some GS to tie them in. I'm quite happy with how they look next to the original!

I also needed a second chain axe, which again I managed to get the bit, but I wanted to make the two axes a touch more individual. So I trimmed off the rear blade and pommel icon and replaced them with some bits from the power axe from the TDA box, again I'm fairly happy with the look: 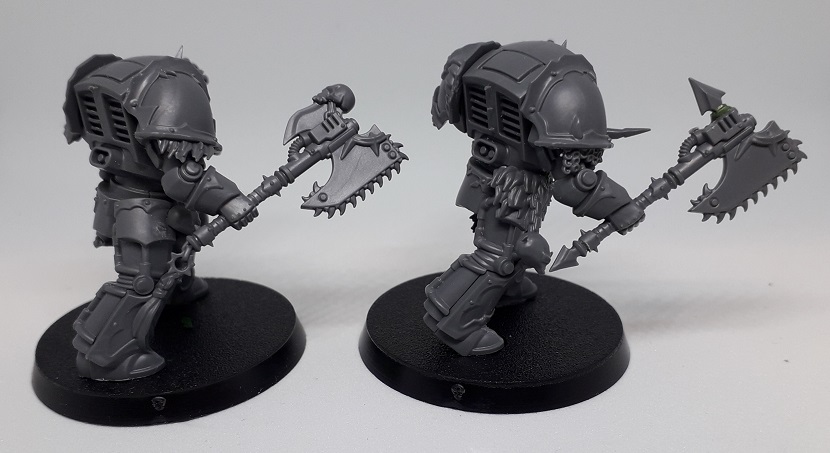 Anyway, that's it for now, here's hoping I get on ok with the painting!!! Any and all C+C is always welcome, and thanks for reading!

Edit: Noticed it had been posted in Chaos Space Marines Outpost.

The combi-plasma conversions definitely work, as does the chainaxe. I like that you put additional effort in by sculpting some details on the connections, it pays off! Is the head of the champion from the SW terminator kit?

I am *very* looking forward to seeing some paint on these guys.

It's good to see the Black Hammers again!

Gods above, this is a blast from the past. I remember lurking over your Iron Gods since I started 40k all those years ago. I'm looking forward to what you bring forward with these guys.

Thanks very much guys, I'm really looking forward to working on this project too!

@Darnok: Thanks, and yep it's a SW head, though your guess is as good as mine as to which kit? The BH will have a clannish, grimy, barbarian feel so SW and Chaos Marauder heads are part of the plan!

@Ace: Cheers mate, now you've got a Queen song that I can't quite remember how it goes running around and around in my head....

@Dredgen: Blimey, that is going back a few years! I still love the Iron Gods, something about them just caught my imagination and still does! I'm sure there are more stories of Talek Varn and his motley crew out there... but in the meantime I'll be doing my usual and writing up some bits and pieces for the Black Hammers!

Anyway, a progress shot for my first ETL vow:

Base coats on, so doing ok. Eagle eyed (not especially to be fair, he's right there!) viewers will also notice the beginnings of some kitbash work for what might be my second vow...

Update for the ETL, Vow 1 complete!

and some slightly closer shots: 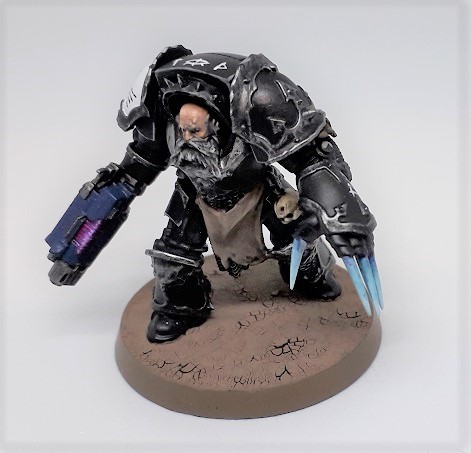 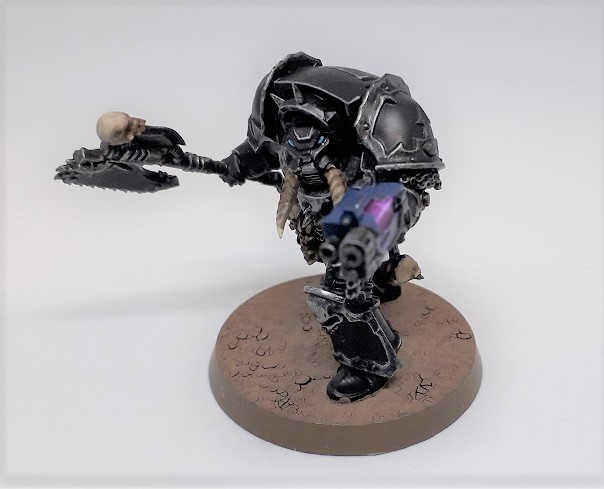 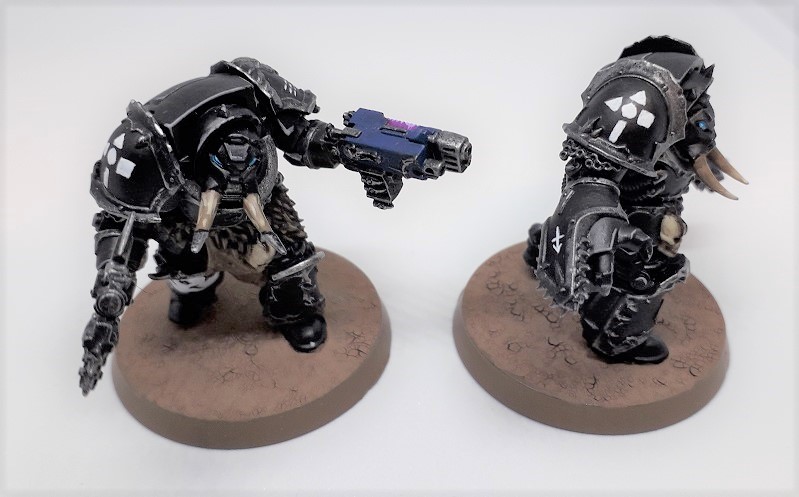 Oh yeah, those are awesome.

It's the battered and beaten look on the silver that really makes these work.

The lack of trophy racks is a nice touch - it subtly shows that the Hammer's aren't quite as Chaos-Devoted as they might look.

@Ace: Yep, that's exactly what I was thinking re the trophy racks, glad it comes across! The trims are so easy to do, you just undercoat black, dry brush the whole model leadbelcher, and then repaint the inner panels. Very top edges get a highlight of lighter silver, but that's it! Makes doing Chaos so much quicker. (Think it's a technique I've pinched from someone here, but I can't remember where I saw it, but kudos to whoever it was anyway!) 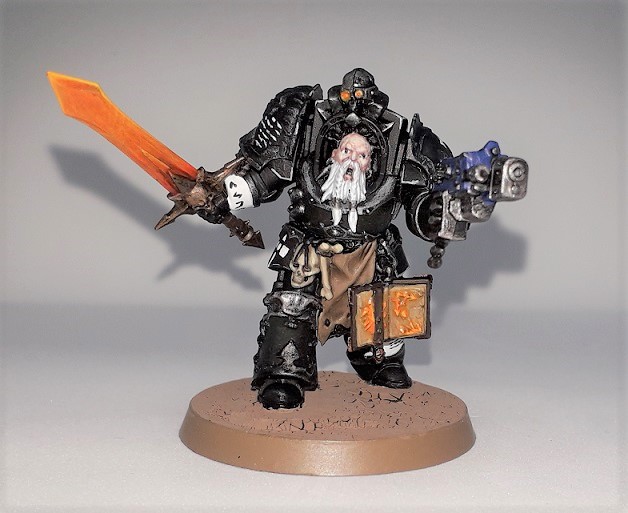 The pic has come out a touch bright, but I wanted to show off the full colour of the blade and writing on the book, which I'm quite happy with, it should make him really pop against the rest of the army? 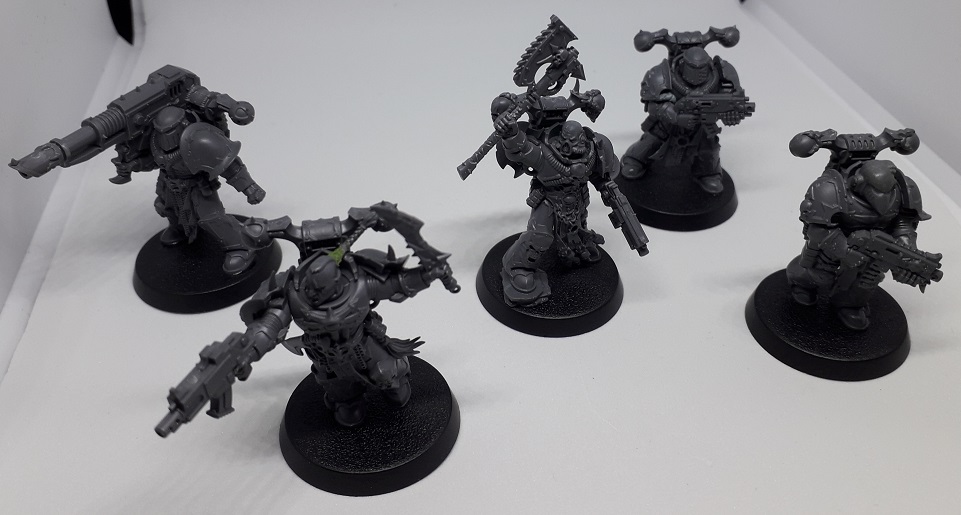 As you can tell, they're Shadowspear CSM with a few extra bits, head and gun swaps mostly to give them a slightly less Chaos-y feel.

Quite pleased with the weapon swaps and Sternguard head with added ponytail on the running guy: 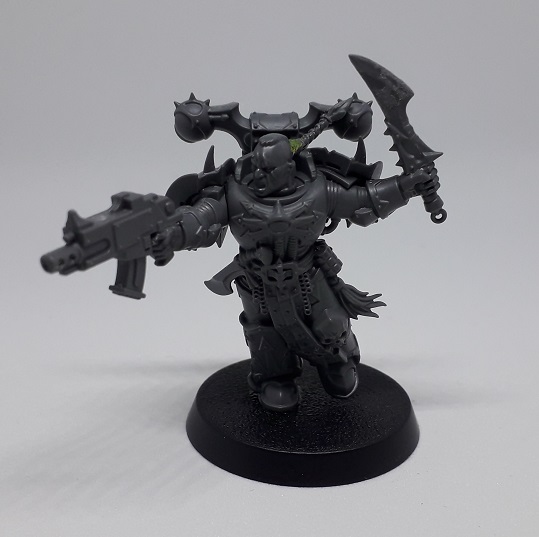 and the Havoc Lascannon arms added to another BP/CCW body. I didn't try to use the Las backpack, just trimmed off the power cables at the rear of the gun and used the regular backpack with one of the vent arms removed: 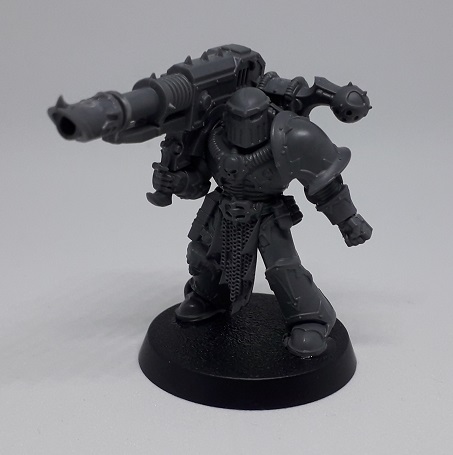 Thanks for looking, C+C is always appreciated!

Ever since the Kaleb Daark Comics from Fantasy I have had a soft Spot for Malal I like where this is going and those new Chaos Terminators are such a great kit (Apart from the misgivings about the Contents).

@Oshikai: Yep, me too, I must admit I was thinking if I do the leader of the Hammers in mini form it will be a plastic Abaddon converted to carry a big (Dread)axe!

These fellas look great, I'm loving the random mix of bits in there.

Took me a while to get signed up as I've been getting squads built, but they're ready now so no more hanging back!!!

I Lysimachus answer the Call of Chaos and vow to complete the following units before December 15th 2019. If I do this successfully I will receive the Mark of Dark Glory and continue on the path to ruin. If I fail I'll wear the Mark of the Lost and I expect no mercy on my soul! 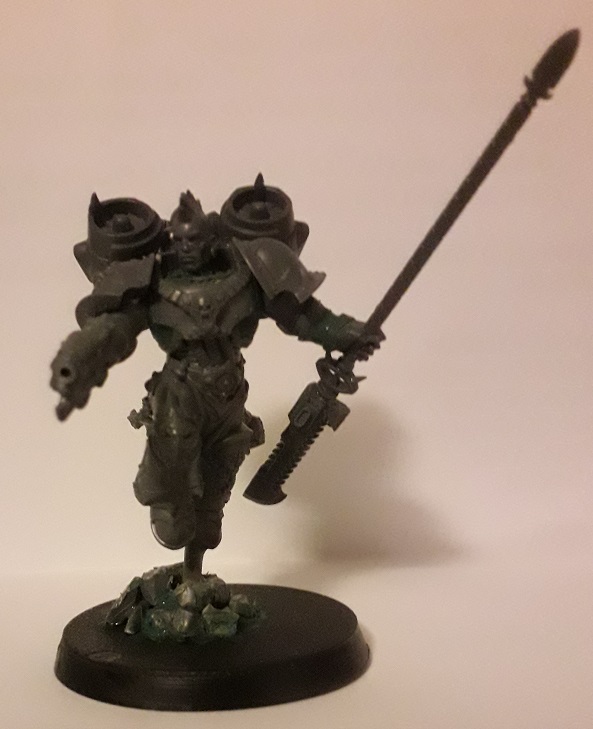 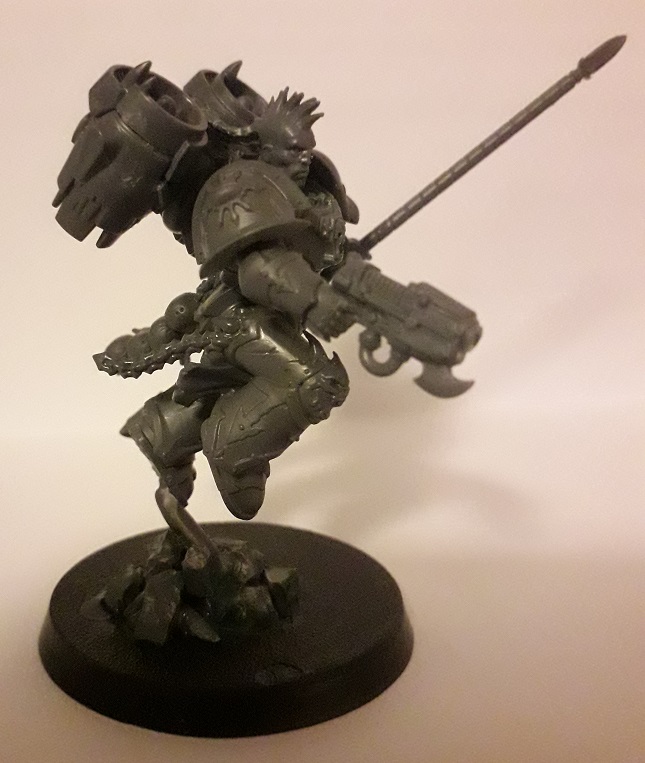 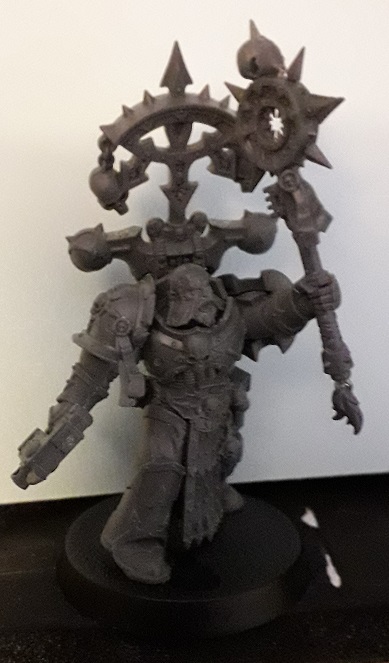 Now, get some paint on them

Also tagged with one or more of these keywords: Chaos, Malal, Call of Chaos