24 replies to this topic

I've tried contrast paint on my local GW stores. Those paints are :cuss for larges flat surfaces (like SM armor) but are huge for small surface and/or those with relief.

So who is hype to experiment daemon paint with those paints ? If we could post pictures of those brave mens creation here to see what it's look like.

I looked down the sights of my rifle, my target looked back. It's eyes were all the eyes I'd ever loved. They promised everything I could ever want. Love, comfort, safety. An end to this nightmare. I felt my will draining out of me, entranced by those eyes.

Well, my current projects are DG and CSM in general, but I want to include some Plaguebearers in my upcoming ETL vows. So there will be experiments coming up.

Overall I am looking forward to trying them on a variety of other daemons! I agree with the notions that the daemon models are made for the Contrast paints, so I expect great results.

One of the paints I have ordered I plan to use on my Pink Horrors for an AoS army, that kind of unit would normally take me a few weeks, hopefully this is a game changer in speed painting.

I don't see them affecting my slaaneshi demons, as I don't really do highlights for them.  I could see them being a huge help, depending on how one paints their daemons, but I don't think I'll be using any for mine.

I do have several Tzeentch flamers and screamers that need a paint so I might try the new paints on them, especially if blending is easly enough. The rest of my daemons are mostly done so too late to change the scheme now unfortunately. And like DreamIsCollapsing mentioned, they don't seem too good on large flat surfaces so I will be sticking with the traditional paints when I start my marines which is a pity as the reds over a leadbelcher base looks the business.

I tried the Contrast paints on my Plaguebearers today:

I tried "Plaguebearer Flesh at first, but was not impressed - it is very light, trying it on another model with white primer gave an almost yellow result. What you see here is "Militarum Green", and I am very happy with the result. So happy in fact that I will buy a pot early Saturday morning! I have found the skin colour for my 30 Plaguebearers!

The Plaguebearer Flesh looks to be almost the same colour as the Death Guard easy builds - which means, while not being the right colour for you, that they got the colour right for what they intended.

This is what I expected, but good to have it confirmed at least. I reckon they'll be a great help to many, but for those of us with less contours on our models and/or too far in our painting perhaps less so! I like my Daemons scheme too so I wouldn't want to change it, plus it's not too difficult to paint

I'll be looking forward to seeing what people can do with them, so if you slap some contrast on some daemons don't forget to post the results up here

I’m curious about them but I’ve already purchased a ton of washes just to paint white and yellow based daemons, I think it would still save time but they go really fast like this anyway...

I’m curious about them but I’ve already purchased a ton of washes just to paint white and yellow based daemons, I think it would still save time but they go really fast like this anyway...

Assuming your location is stated correctly: check out one of our four GW stores, they have the Contrast paints and plenty of primed models to test them out. The one at Hackescher Markt has some Poxwalkers to test as well (only a few though), and I found them to be a good tester for daemonic units.

P.S.: Where are you playing, and would you mind another lost sould joining your group?

I'm gonna be trying them out when I get them- having scrapped the "icy/white" scheme my Khorne contingent (currently consisting of a very lonely metal Skulltaker) was originally going to be painted in, I'm planning on experimenting a bit with the Contrast to get some smooth but fast blending effects- I'm thinking of doing them a bit like this: And Contrast should be absolutely ideal for that sort of effect.

The yellow skin on my Nurgle stuff is probably going to stay the same as it's very easy to do anyway, largely consisting of Averland Sunset, a tonne of washes and a drybrush, but I'll most likely be using Contrast for the horrible details, and I've primed my Rot Flies grey with some preshading in preparation for Contrast as I want them to be visually distinct from the Plaguebearers riding them.

My Slaaneshi stuff is going to benefit massively from Contrast, as the organic shapes and veritable rainbow of colours I have in mind are going to be much easier and quicker to paint this way than the old-fashioned method. Yay!

Lastly my Tzeentch stuff probably won't use much Contrast- my Blue Horrors are basically black with inky blue highlights, the Pink Horrors will be mostly white but with reddish shading (White undercoat, Carroburg Crimson wash, re-highlight etc) and my Brimstones are currently done with Nighthaunt Gloom over preshading. That said the more detailed models will probably love it and I can see it having a lot of use for getting really surreal patterns on a Lord of Change.

Tempted to paint my 1000 points of grey Khorne Daemons with contrast.
But I also have an airbrush I want to get better with :-/

Airbrush and contrast are not mutually exclusive.

Apologies that I do not have pictures but had my first test of Contrast paints today, used Volupus Pink to paint the skin of a few Pink Horrors, looks a decent table top standard and took me about 10 minutes to paint all three test minis which for my normal painting speed is pure magic.

Just wish I had ordered a yellow in my initial batch so I could try painting it over silver to create a gold for the jewellery.

I'd recommend a brown rather than a yellow for gold, that's how it works with ink over silver.

I'd recommend a brown rather than a yellow for gold, that's how it works with ink over silver.

Thanks for that, I knew I had read people creating gold using contrast over silver but could not remember exactly how as cannot find where I read it.

Nabbed 3 Contrast paints today (most were sold out already!) and I'm working on my Plague Drones with them. For the record, this was done with pre-shading for the primer (which incidentally was just Mr. Surfacer 1200 grey and 1500 black) and at this moment the only non-Contrast paint on the models is the Turbodork Dark Net, which I used for the wings. The flesh is Fyreslayer Flesh, the carapace is Skeleton Horde and the red bits are Flesh Tearers Red.

It looks really good - I think those paints are a go for going forward. 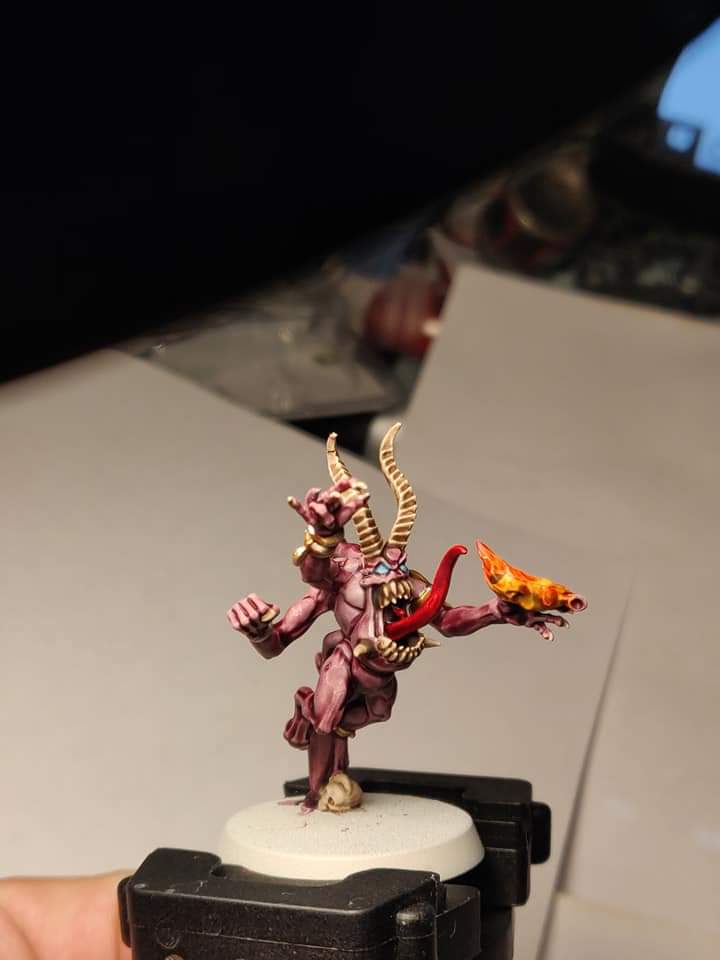 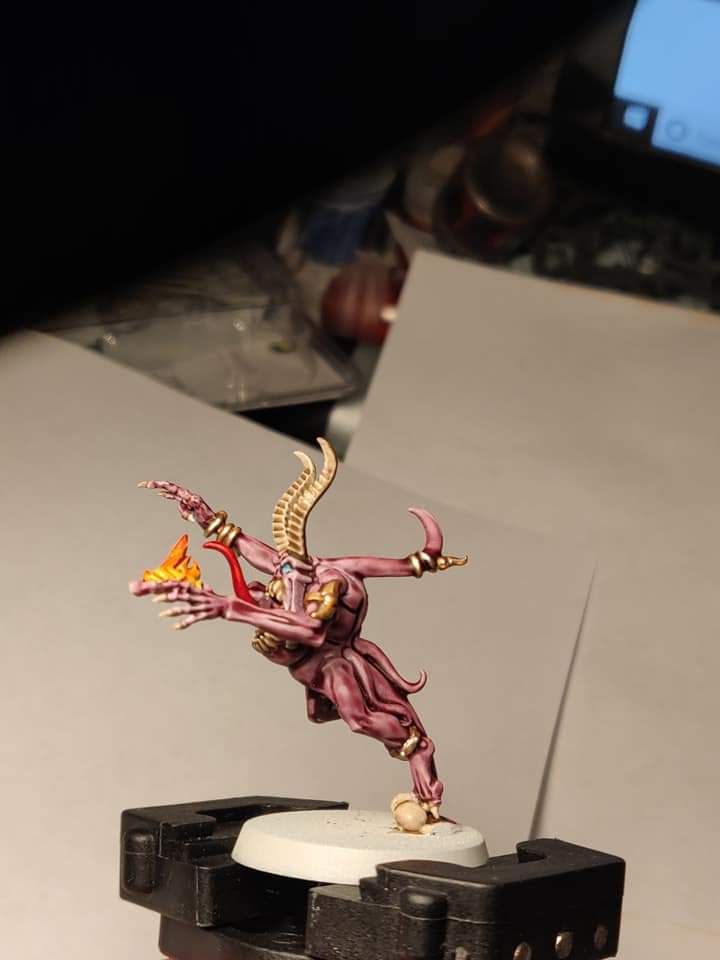 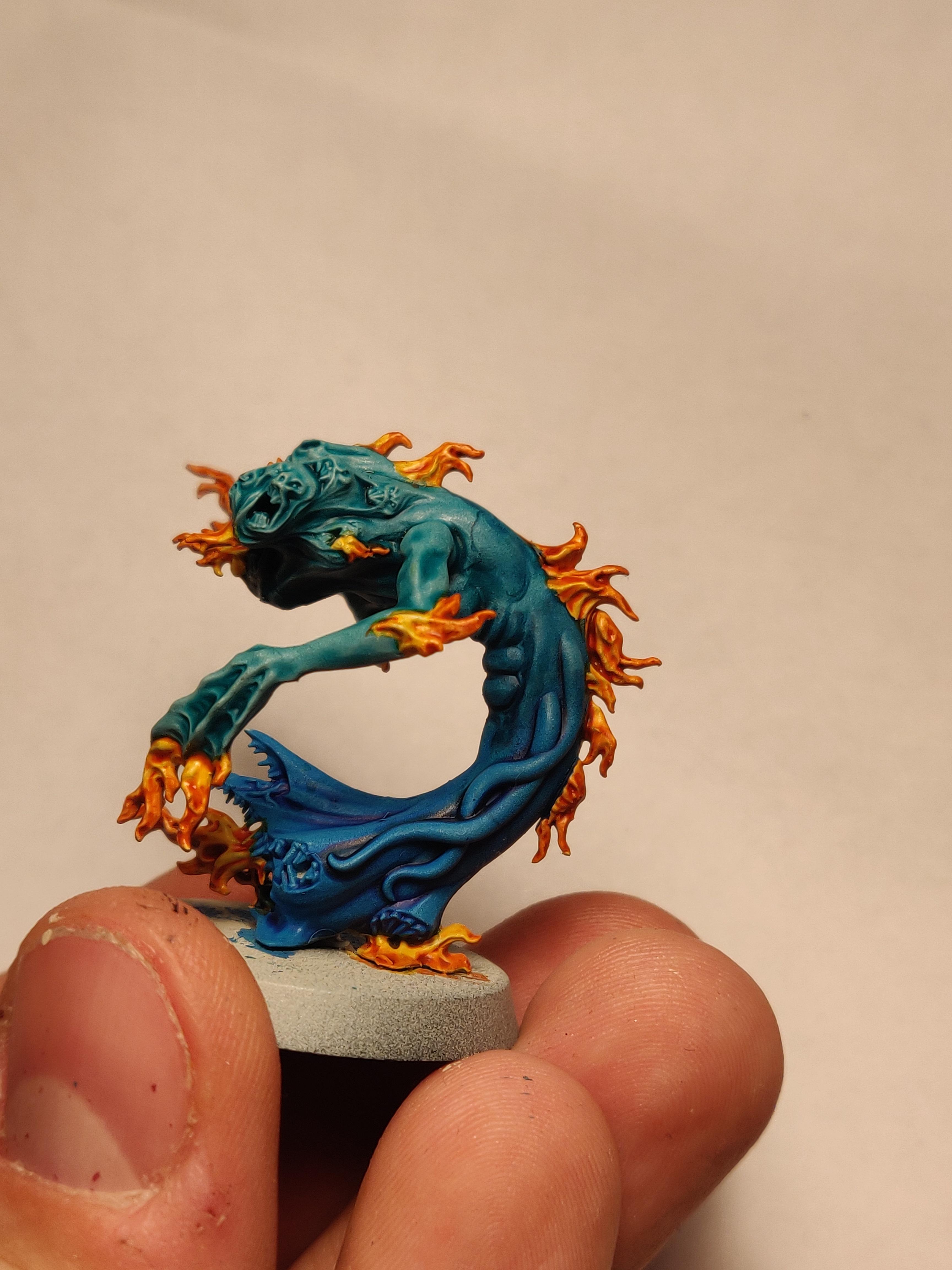 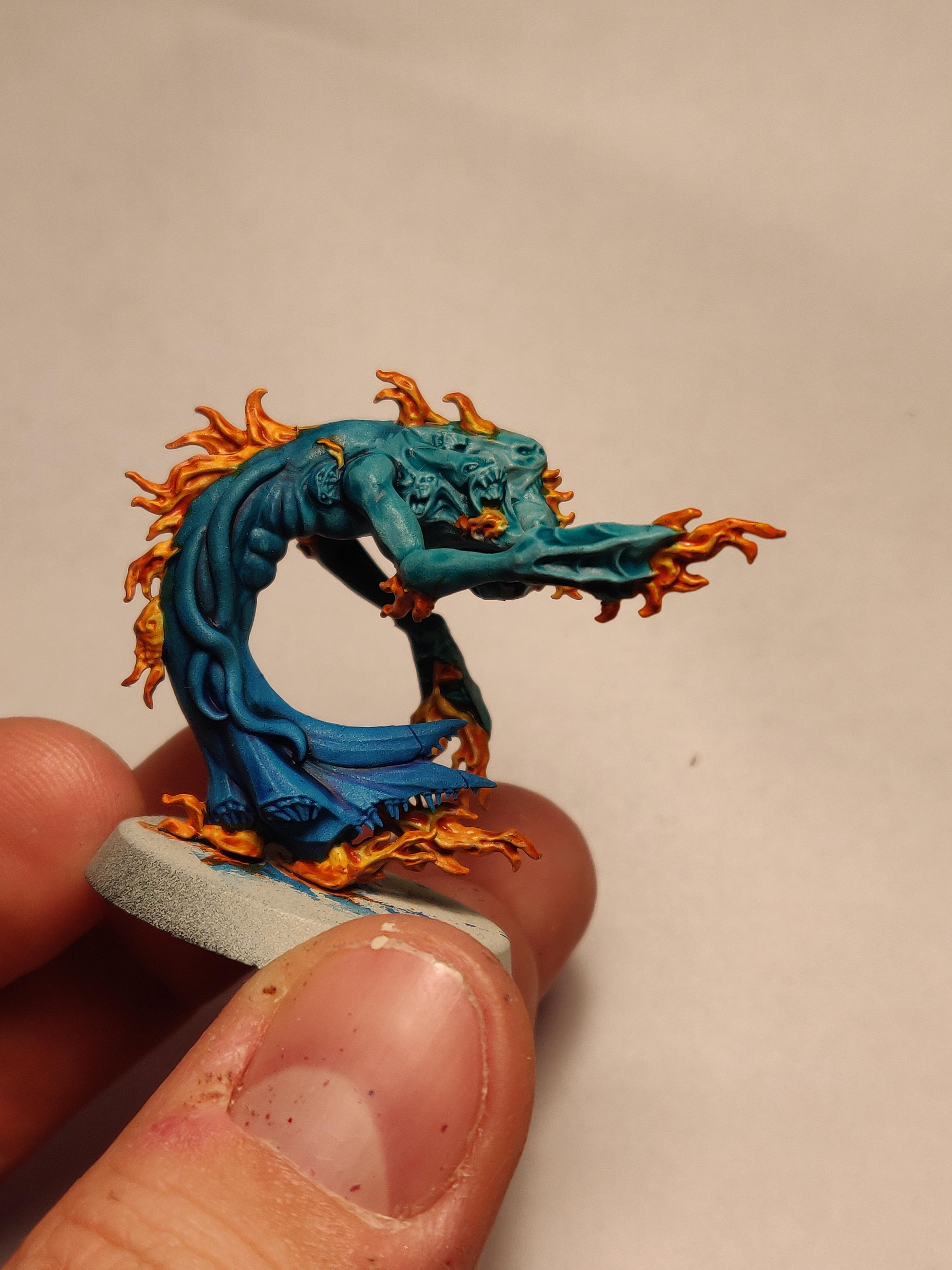 That looks good! What'd you use for the flames? Is that one contrast or two?

Thanks! Flames are just Iyanden Yellow & Gryph-Hound Orange, I tried 2-5 colour blending and I think just the 2 colours gives the best effort/appearance ratio. 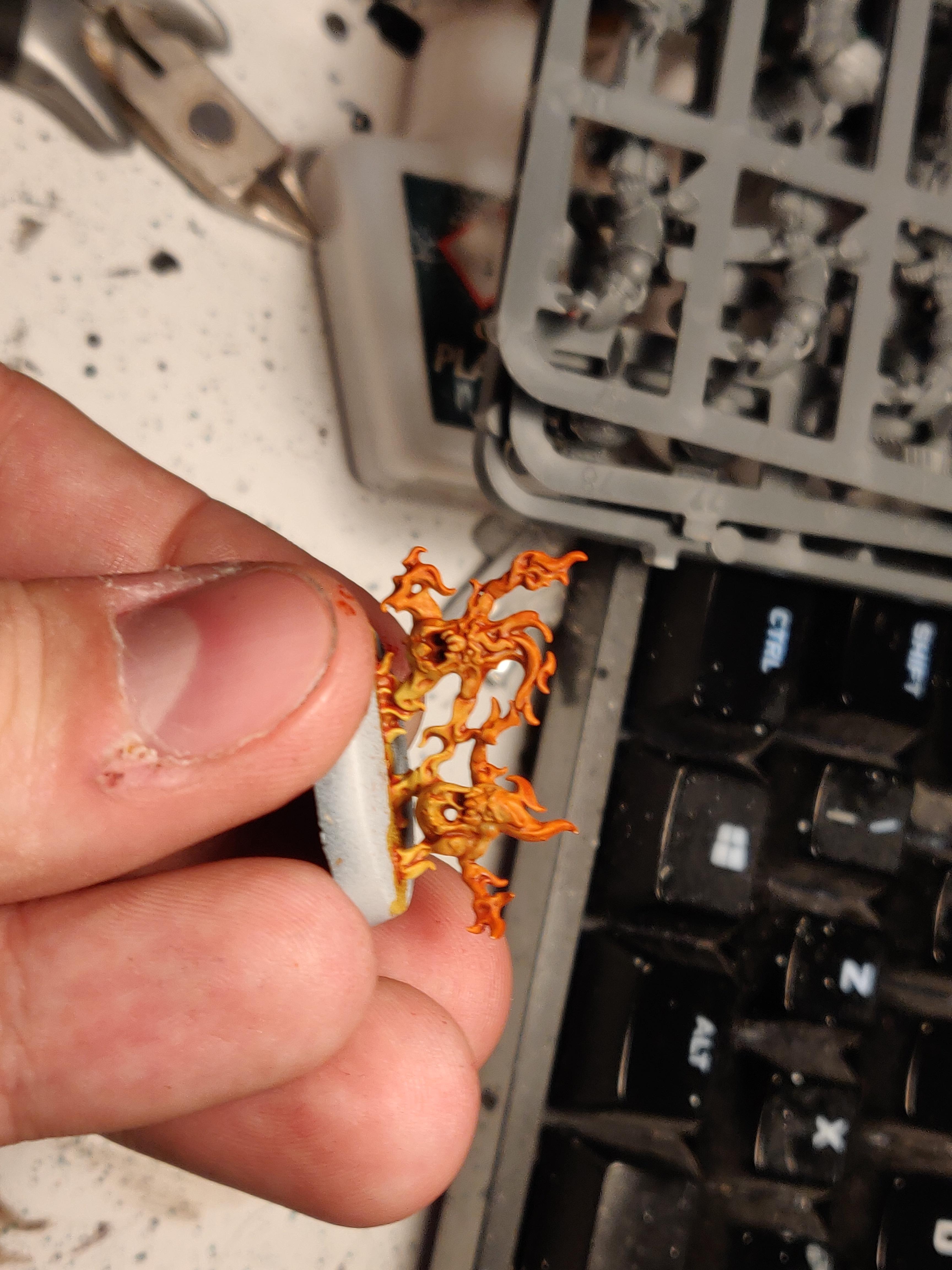 Anyone tried contrast on Bloodletters and Fleshhounds yet?

And how about bigger models in generel? Anyone brave enough to throw contrast on a greater Daemon already?

@dreadmad did you thin the contrast paints? One layer or several? Your examples give me some hope to paint some boxes of undercoated daemons...

@dreadmad did you thin the contrast paints? One layer or several? Your examples give me some hope to paint some boxes of undercoated daemons...


Nope, straight from the pot - and I kind of just used them in the way you'd use an all over wash, a reasonable amount on your brush without obscuring details.

2 layers of Magos Purple for the Horrors.

1 layer of Tallasar Blue, 1 layer of Terradon Turquoise and 2 layers of Aethermatic Blue for the Flamer (wet blended, I'd recommend a thin layer of medium on the model to slow the drying time to make wet blending easier - I did without as I didn't have any at the time though).

I think the real key with contrast is to pick out the details with non-contrast paints, all my detailing is done with base/layer/shades as normal

Back to x CHAOS DAEMONS x