WIP - The Wings of Dawn, a Dark Angels Successor Chapter

87 replies to this topic

Yeah, it would be nice. I do expect GW to only primarise the Chapter Masters of each chapter for now, but given that Tigurius got primarised as well in the Ultramarines, maybe we will get more than only Azrael in the new size. In any case, this project currently only pertains to older models.

Once I have finished my project army (and I have actually updated the ARMY GALLERY post with a diagram on what that project contains, in case anyone wants to check it out), I'll see about making a new company into the chapter, which includes the Primaris Marines. Or start a new army. Or change factions. Or even go to Age of Sigmar. I don't know yet. I'll cross that bridge when I get to it. But I am holding out from going full into primaris marines for as long as I can, so as to wait until the models are all there and available.

The first half of the first assault squad of the second company. In bikes, carrying melta weaponry all around.

Great palette for the Bikes Berzul.

And the Libbys look very nice too

Thanks, Lt. Arkley! I really do think the color looks really good on these bikes. The librarians are also coming in nicely. 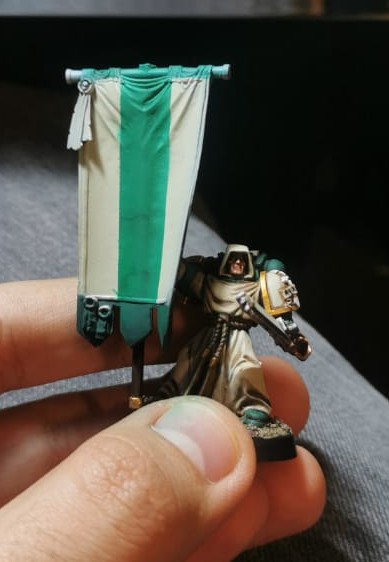 Really enjoying all of these- color scheme is great, makes the army look really distinct. Level of painting is great too- really like the robe on your ancient.

Here is the Ancient, pretty much done.

Company Champion and Company Apothecary will be next, to finish up the command squad.

Any suggestions? I'm struggling with should be written an inscription that will go under the heraldry.

Do you want a phrase or just a word?

Do you want a phrase or just a word?

I was thinking of a word, so as to not have issues with room and legibility?

Wow, I had NOT thought of that! That just might work! I could put the homeworld's name (Alcides), or the name of the System (Orientis Lux)

The ideas I have so far

Ex nobis fortuna (kinda means "Our fate comes from us), or Fortuna nobis est (which means "our fate is our own")

Orientis Lux (the system name for the chapter)

Thats is what I have so far

I think if you create a little more story to the banner, creating the wording will come easier.

Well, that is a very good approach.

I always envisioned this banner being the Chapter Banner, carried by the Ancient of the Second Company, as this is the first Battle Company of the army; often commanded personally by the Chapter Master (while the First Company carries a company banner, representative of their ranks as veterans, and their more specialized focus as a formation that stands apart from the rest in the overall chapter structure).

This is why the banner has no company number, and features the heraldry of the chapter as a whole, and so prominently, over any other more pictoral representation of simbol (such as those that could be found on the banners of the "deathwing" and "ravenwing" chapter equivalents).

It should represent the chapter as a whole. Not the hunt in particular

If there is a facet of the army that could or should be represented here, it should be the most central to it. Which is that this chapter survived its own fated and foretold destruction, and was refounded into a new name and purpose.

Which is why I thought a chapter motto , the chapter name, or the system/homeworld name, would be most appropriate.

In hunting for some good latin phrases, I thought to go biblical, with something like FIAT LUX. Which is latin for Let There Be Light.

Works as a motto, a battlecry, and a chapter philosophy.

Its not original, but fits rather well with the name, story, themes and purpose of the chapter as a whole, I think.

Fiat Lux sounds awesome! i really like your explanation for the banner.

Thank you! It simple, and I admit it is not original at all. It is lifted straight from another source (the christian bible, in this case), but the more I think about it, the more it fits. Like, perfectly. With the origin, story and themes of the chapter. Its heraldry, the name of the system they guard, and even the name of their original chapter designation. It was not something I planned, but wow. It really does fit really well!

I think I'll go with this. In fact, I have edited the first post of the thread to incorporate it as the chapters' battlecry.

Good job on the Ancient.

Good job on the Ancient.

Thanks. But, I do have to stress that I did NOT paint this model.

As I have mentioned before on the thread at various points, I am currently unable to paint much (if at all), due to the fact that I am currently extremely overburdened with work and other issues in my life. So, this work is based on my design for the army, but is not mine in the painting itself.

I have been doing other stuff, such as deciding the painting scheme overall and the colors and design of the models in particular, as well as building models, and most of all writting the lore of the chapter. The work that I can manage to fit in my daily schedule.

But the paint work itself has been done by two very close friends of mine. They, in trying to help me get my army done soon (hopefully before the new codex update arrives!), have been taking a lot of time and have been putting great efforts in painting these models.

I post these pictures because I LOVE the new successors I am playing, and I want to share them with everyone as I continue to develop them.

But, I would not want there to be any chance for their work to not go recognized, or wrongly attributed to me in any way.

Well, most librarians, and the ancient, are done... 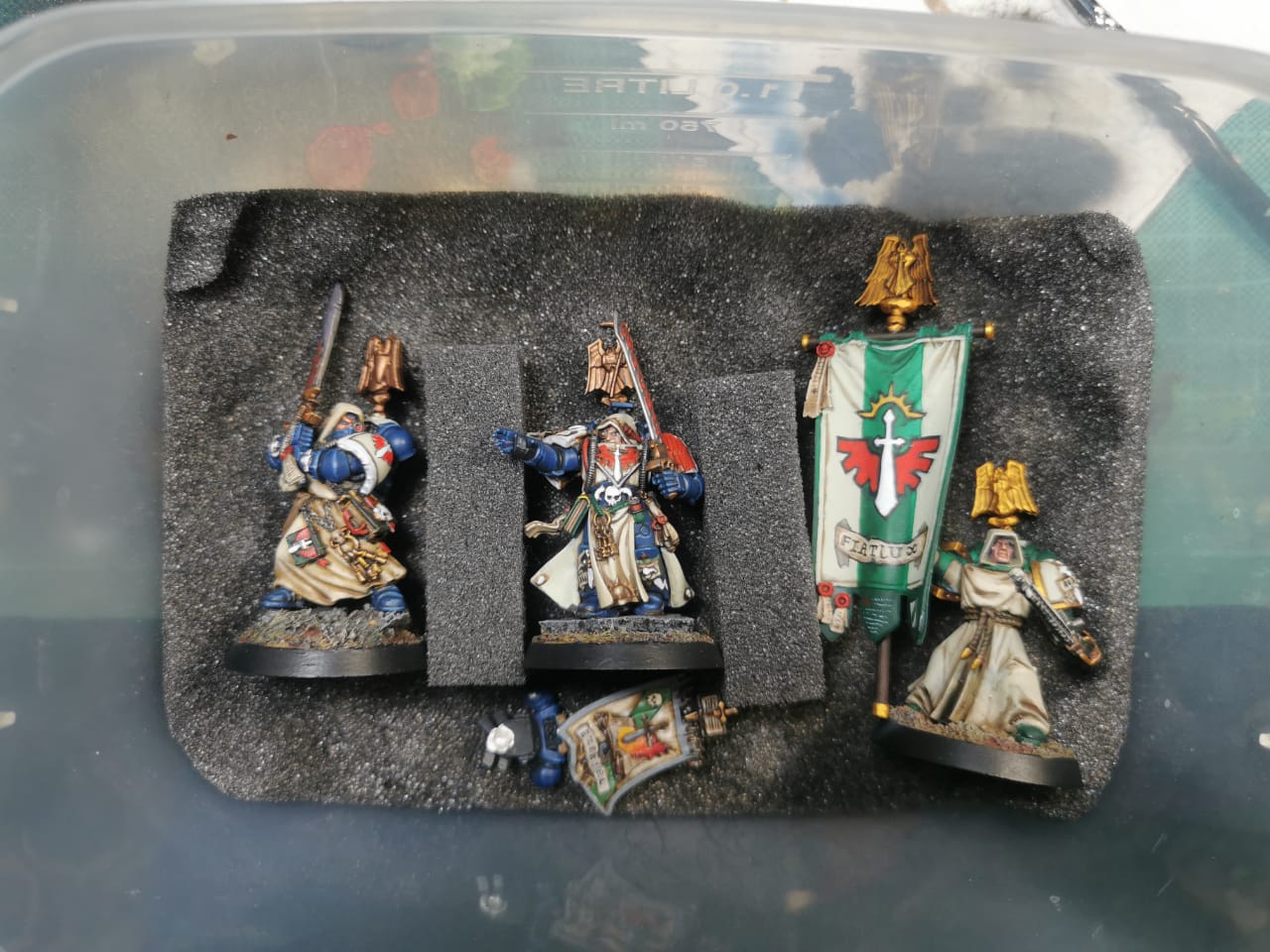 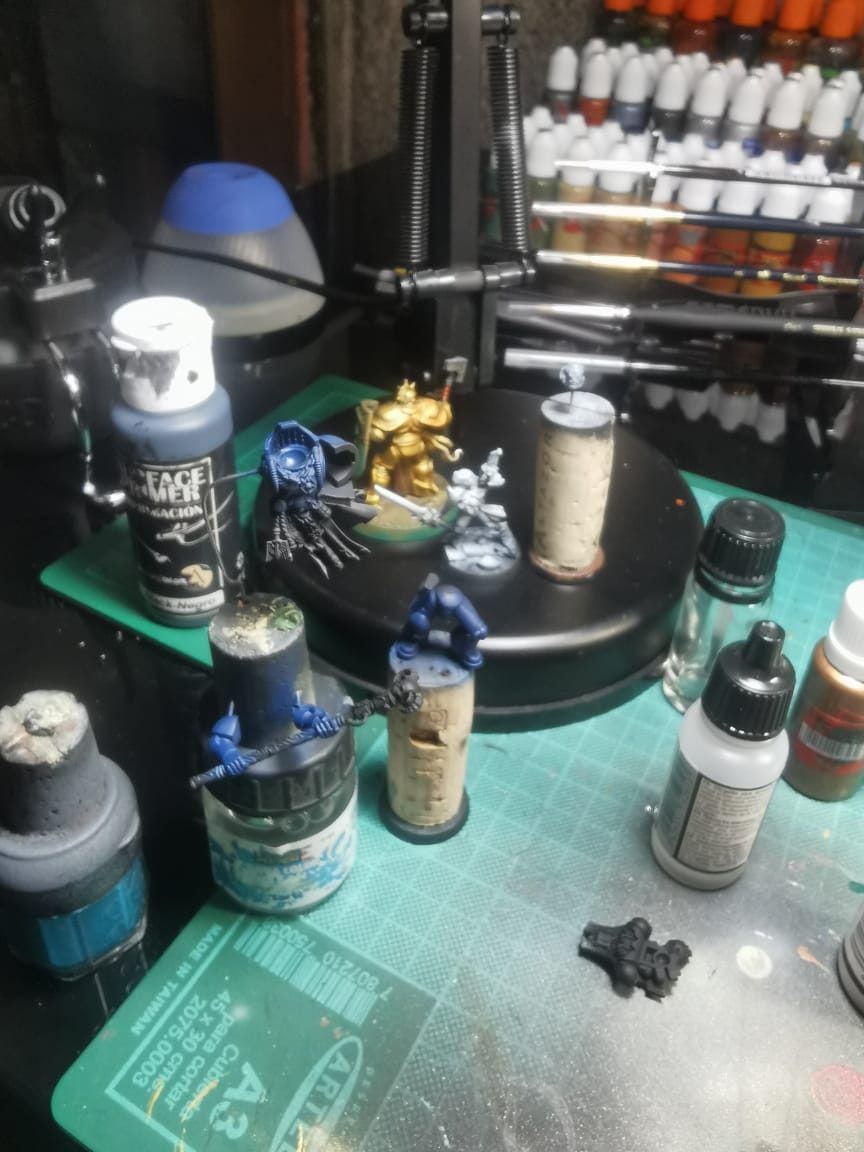 ... and, with a few bits left over from the kit, there was enough to makeshift an armorium cherub for the old Devastator Squad! 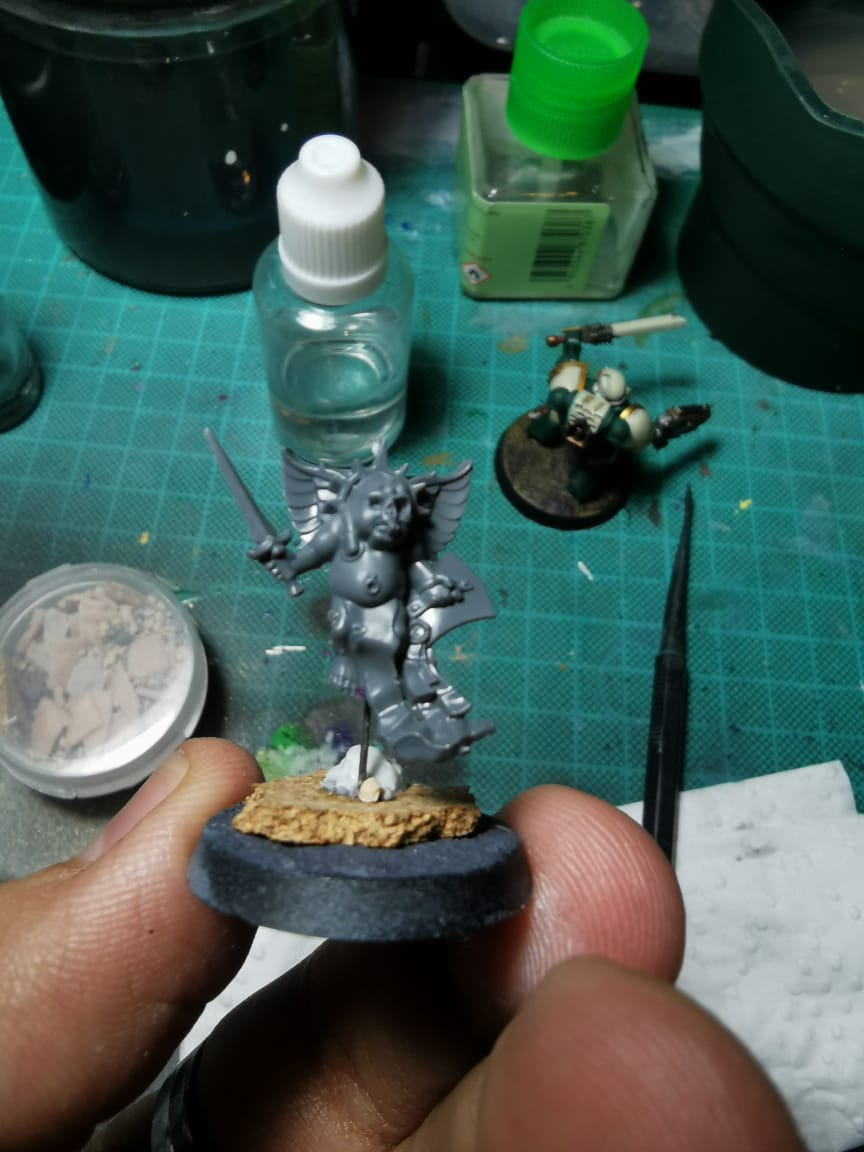 Wow they are excellent ! Both Ancient and librarians - great colours choice

Ok so, I've been NOT updating this thread for a while now.

Mostly because I've been re-writting and expanding A LOT of the lore, in another thread for the LASC19, back at the Liber Astartes subforum.

I am going to start copying the new updates of the text of the lore fo the chapter, into this thread soon. For now, I can update some pictures of WIP models, I guess: 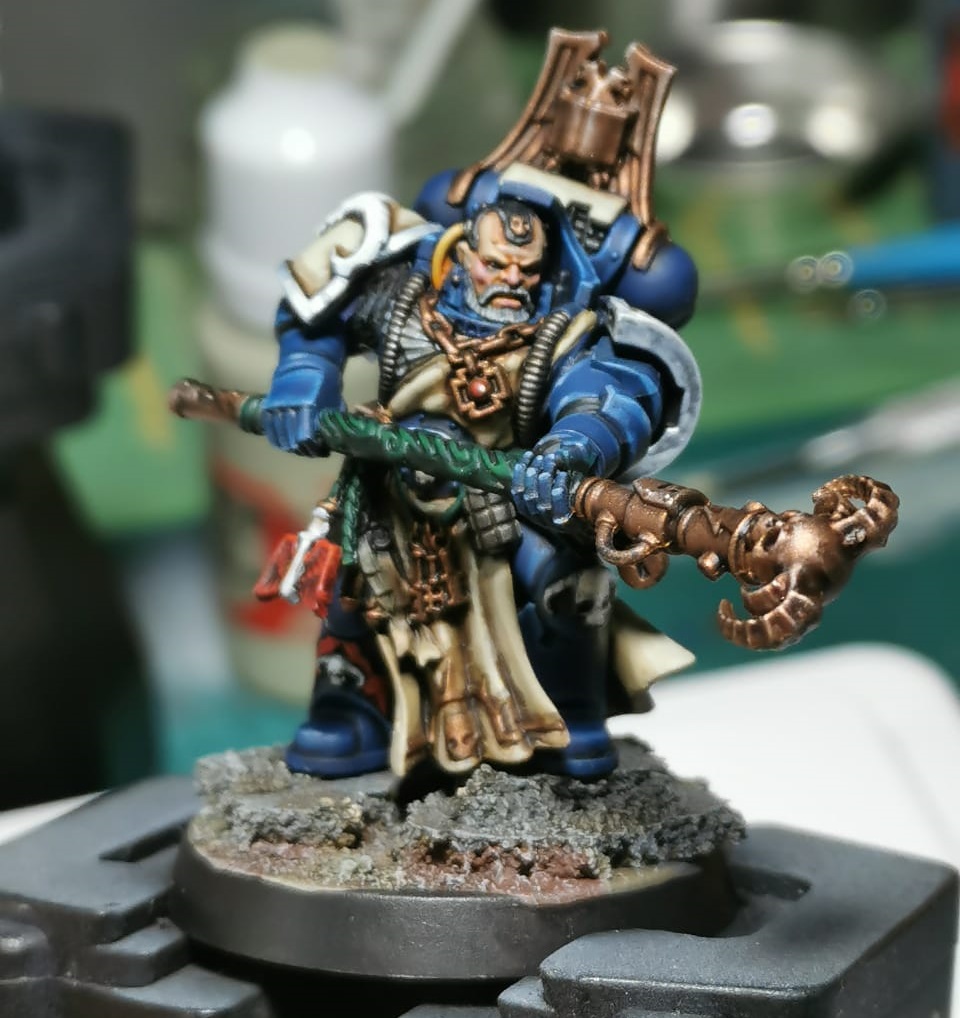 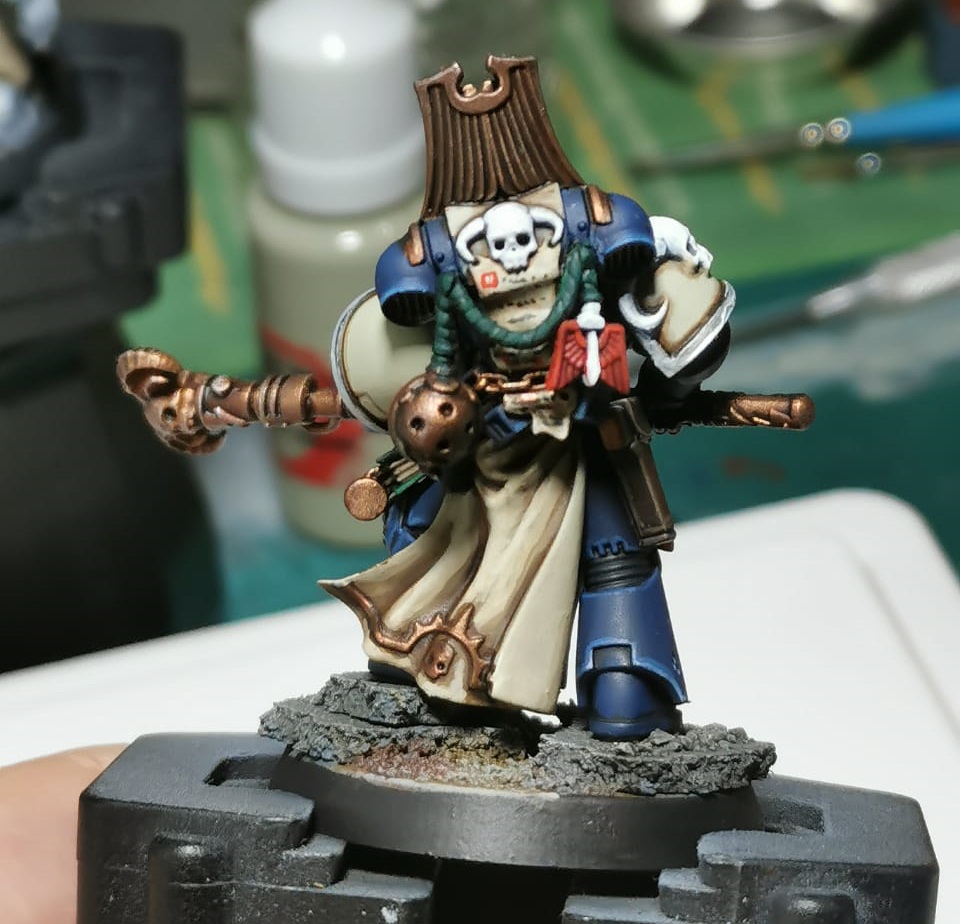 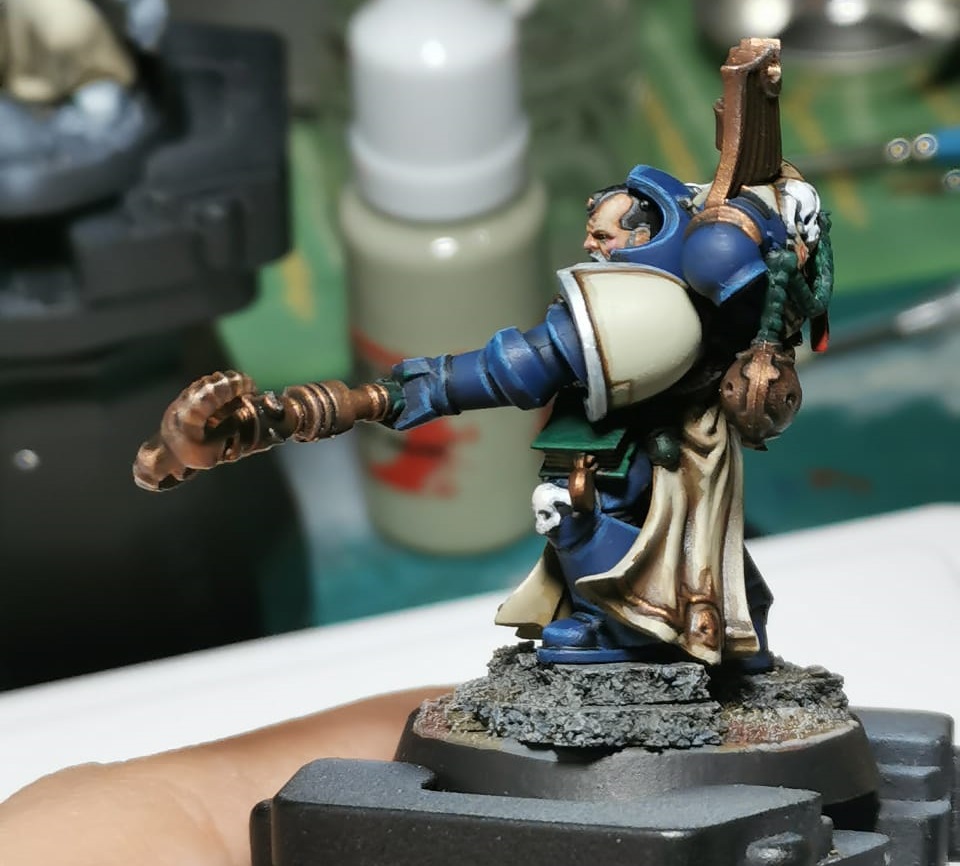 NEXT, I HAVE HIS CHERUB, WHICH I HAD ALREADY SHOWN WAS ON ITS OWN BASE TO ACT AS, I DON'T KNOW... A WATCHER EQUIVALENT? AN ARMORIUM CHERUB? SOMETHING ELSE? 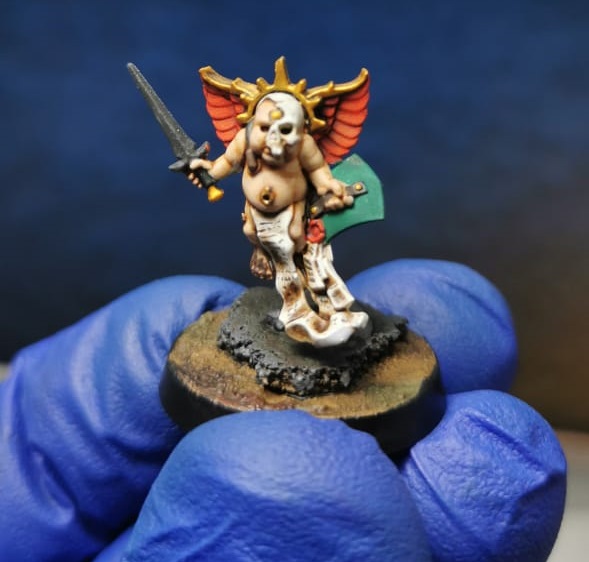 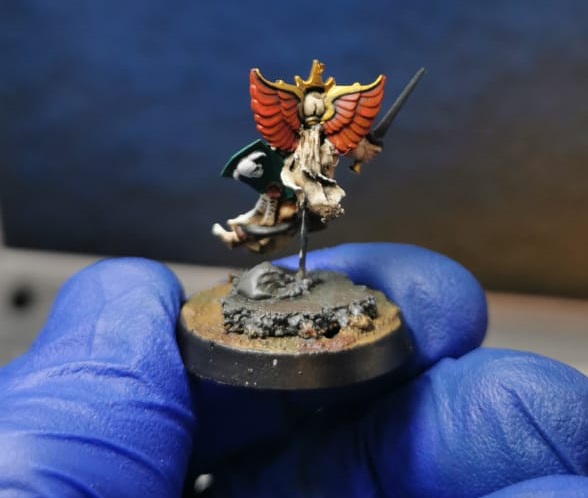 NEXT, THERE IS THE WIP OF THE LAST TWO MEMBERS OF THE SECOND COMPANY COMMAND SQUAD. THE APOTHECARY... 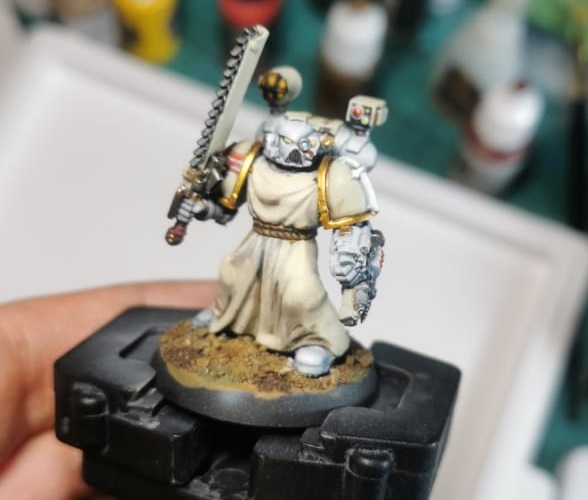 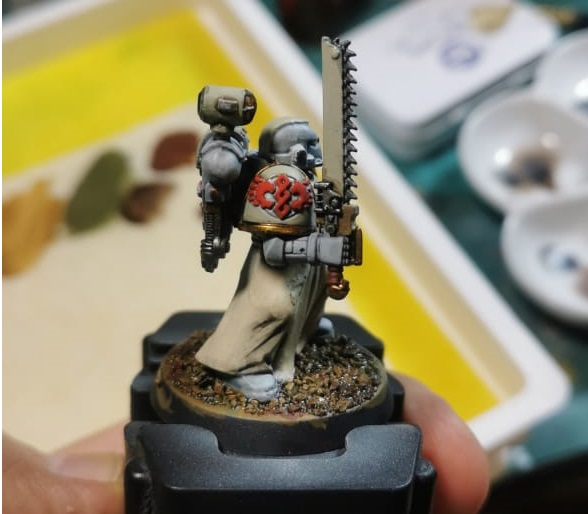 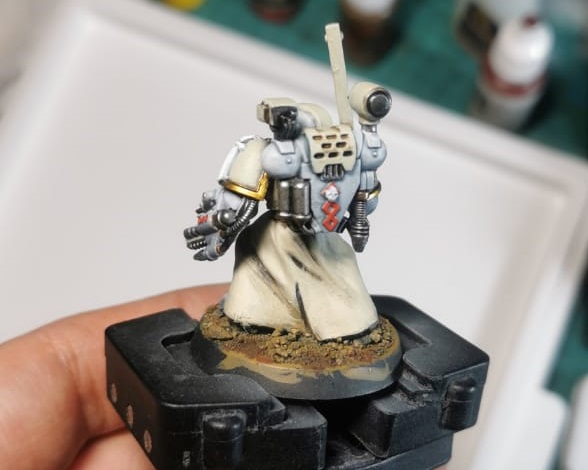 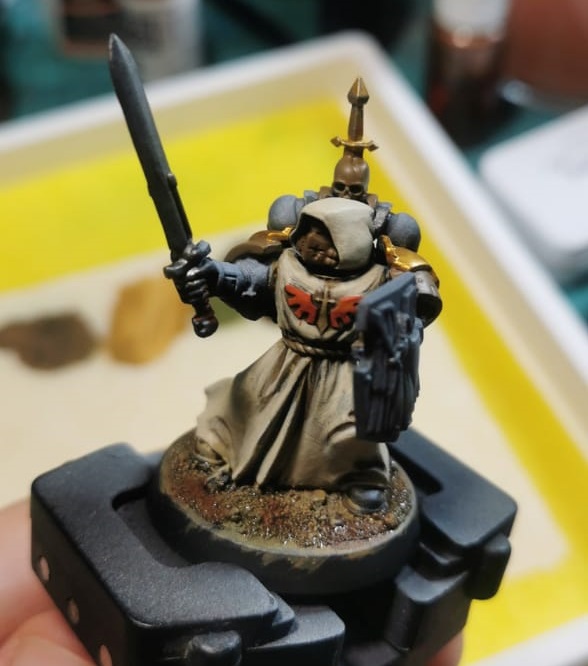 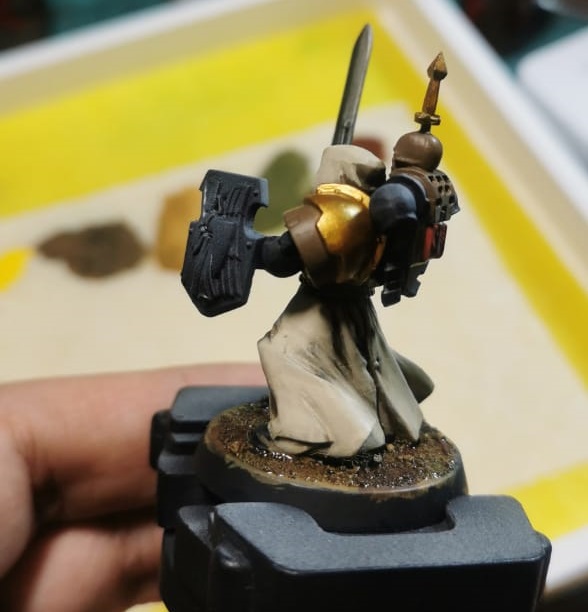