WIP - The Wings of Dawn, a Dark Angels Successor Chapter

87 replies to this topic

I've been going through the whole thread here, really great work all around. Can't wait to see more.

So, for the past few days a freelance illustrator and artist friend of mine started working on a piece, for the heraldry of the chapter.

Its not yet done, but almost. Despitw thia not being a models or lore update, I wanted to show his work here. 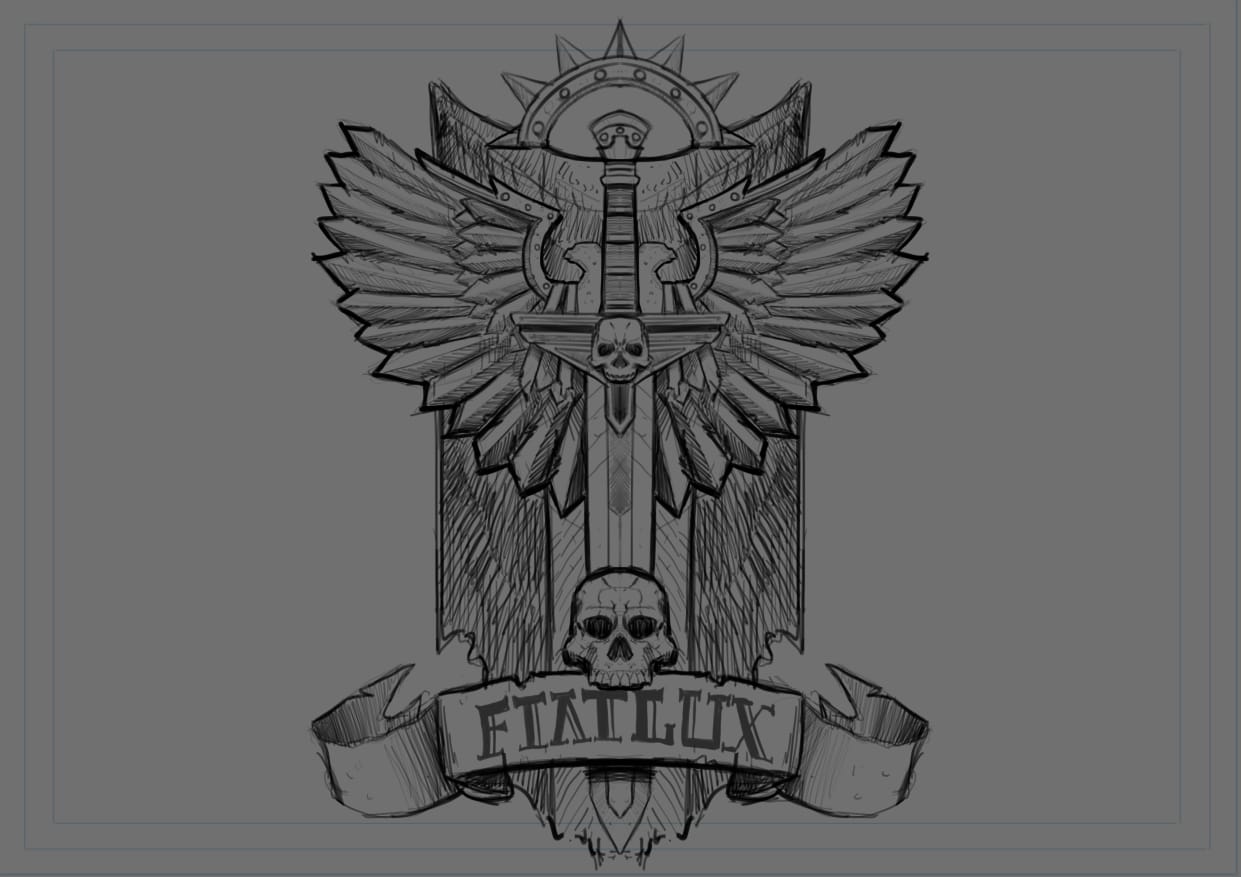 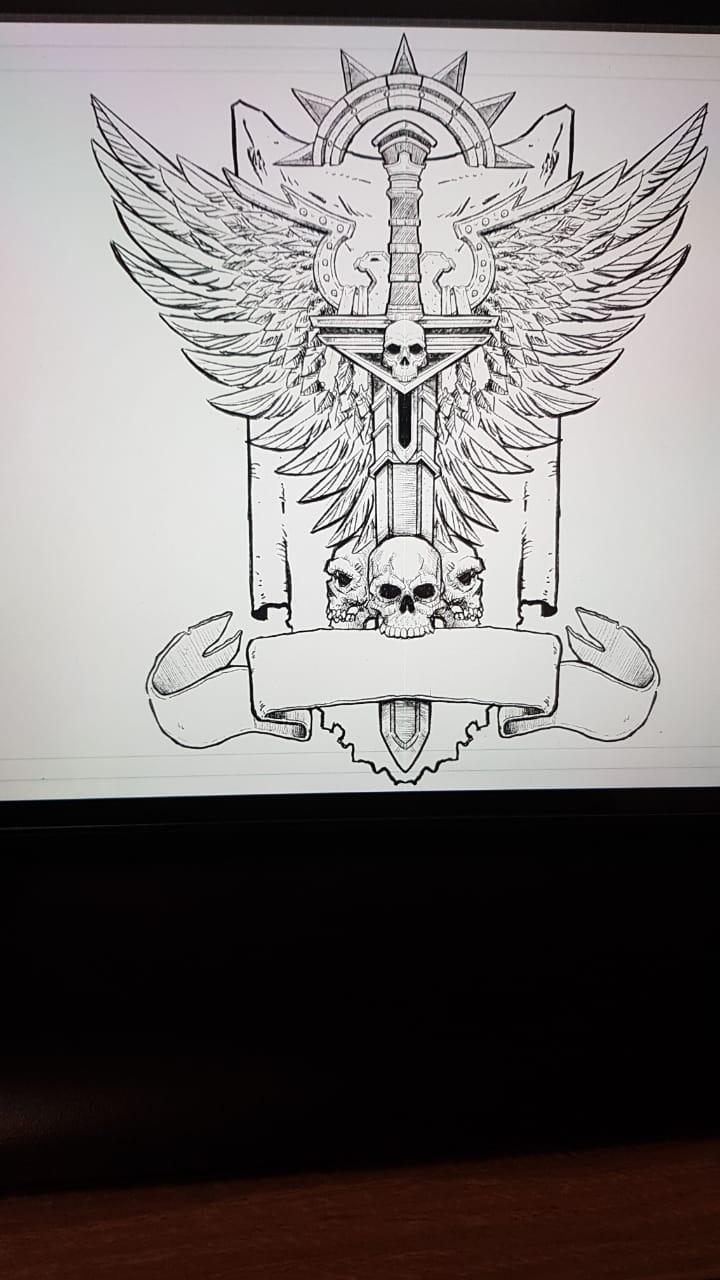 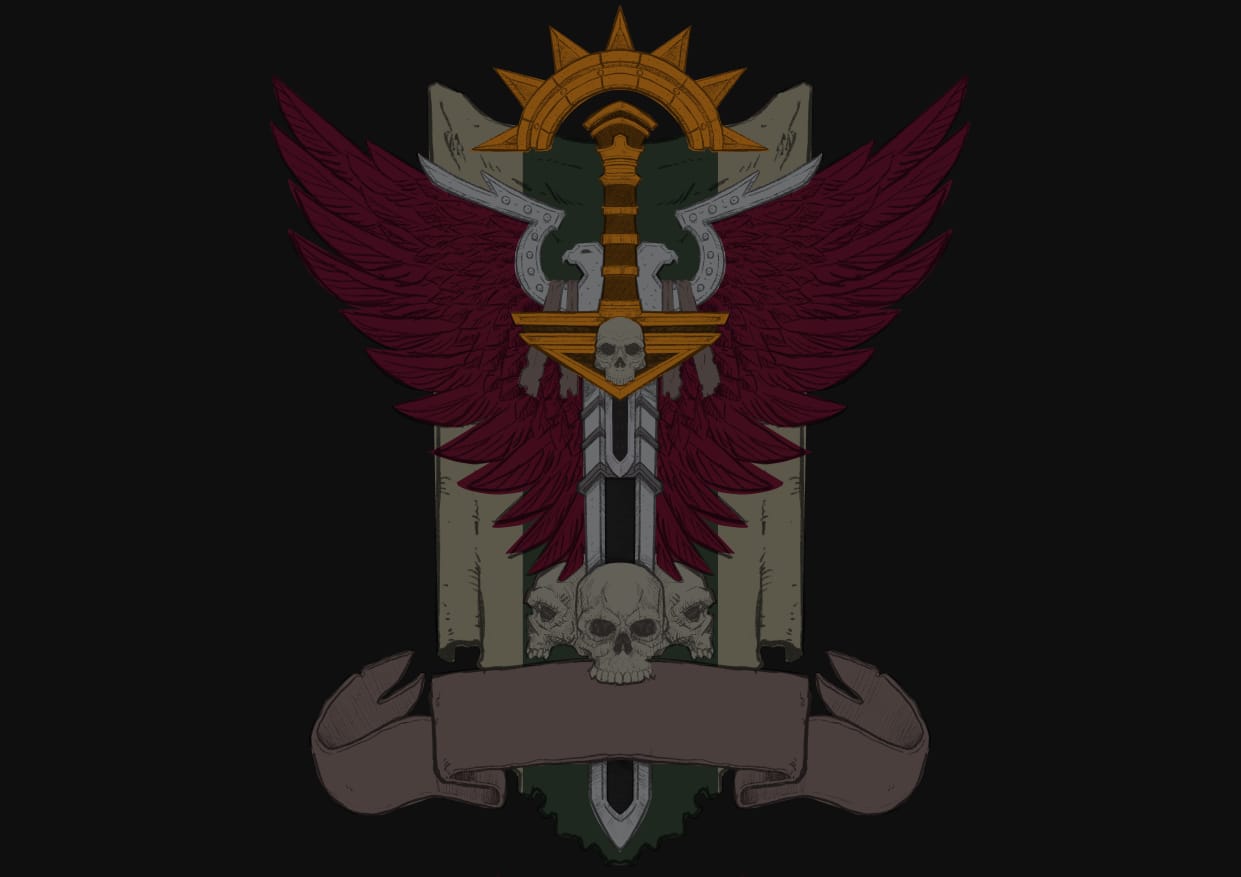 Ill add the finished one to the first post of the chapter.

Are you going to somehow be able to transfer this to a banner?

I don't plan on it, really. I like my banner, which is a simpler representation of this.

The piece is more for the joy of having it in the lore of the chapter.

Excellent work on the chapter, love the personal warhound that's a neat addition.


I might change my mind down the line... Not sure yet... Either way, thank you. Ill let my friend know his work is appretiated

But, the army keeps progressing.

The Master of the Second Company, and his last Lieutenant. A Jump Pack, close combat, Terminator leading, dynamic duo of characters. A master with a thunder hammer and a storm bolter that can be upgraded to a Foe Smiter, and a lieutenant with a plasma pistol and a power sword that can be upgraded into a heavenfall blade.

Both guys meant to take point, leading my bikers and terminators, and making sure they get into the fight and land each hit and shot, before coming in themselves to crush whatever big bad evil thing needs being crushed. 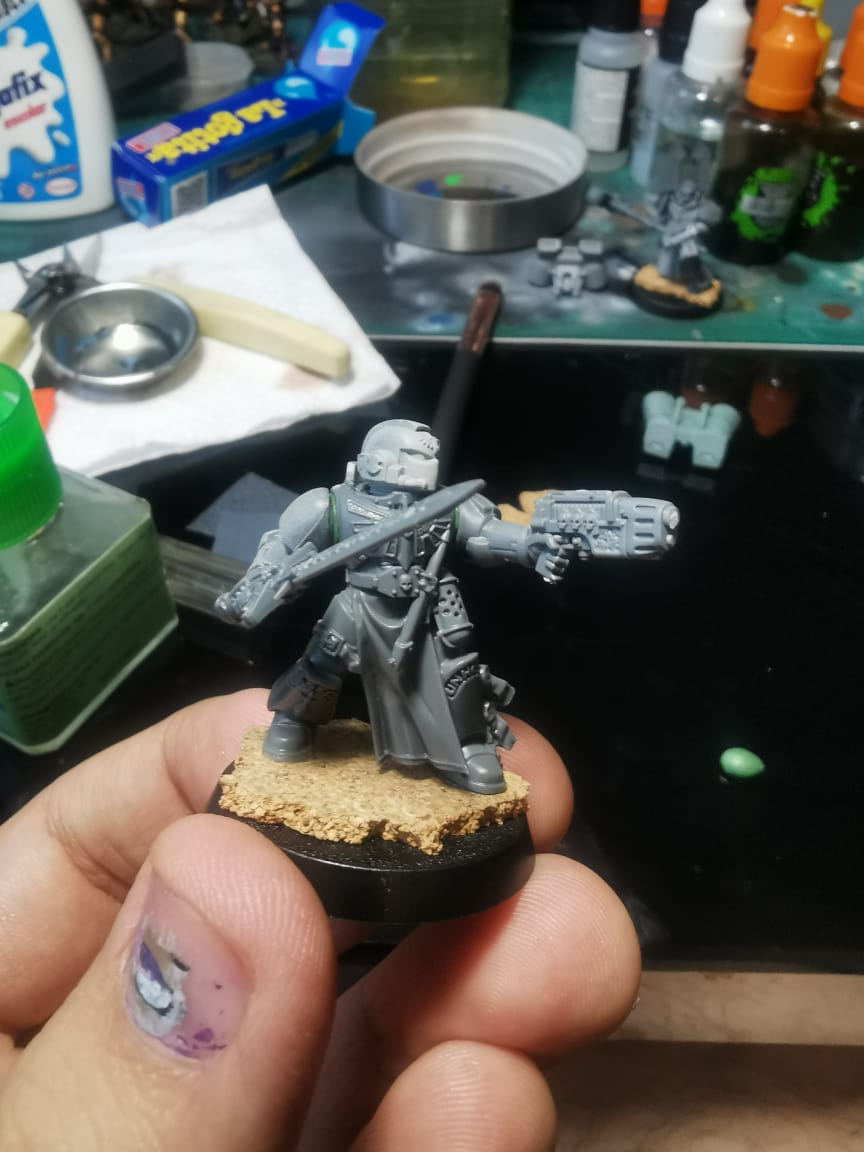 Oh, also, here is the finished artwork piece my friend made for me: 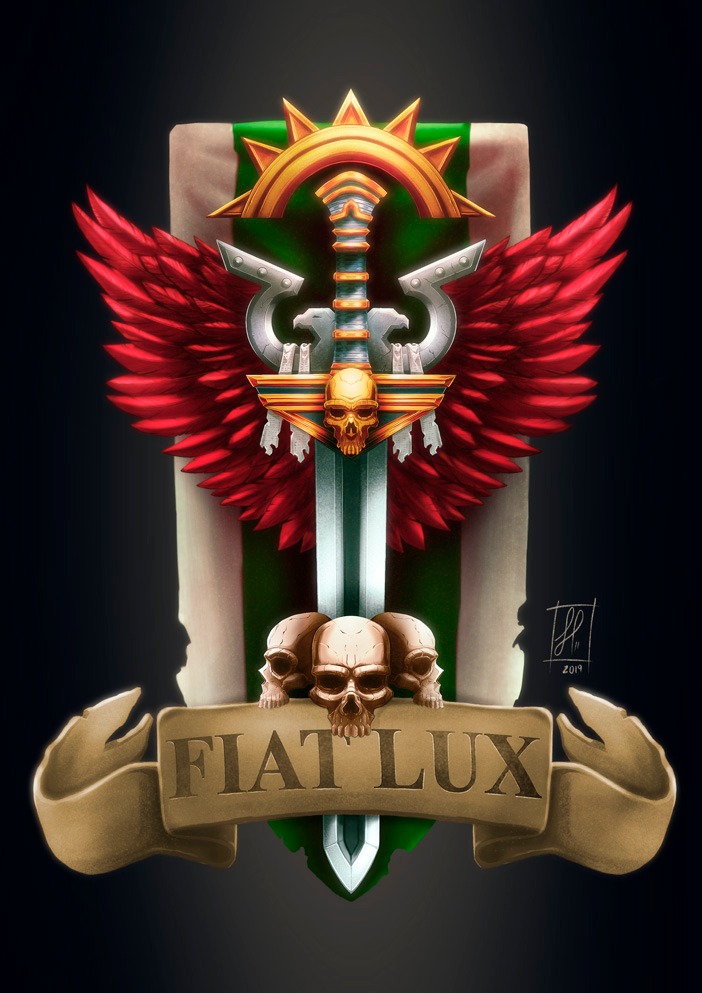 Oh, yes. It's all coming together. 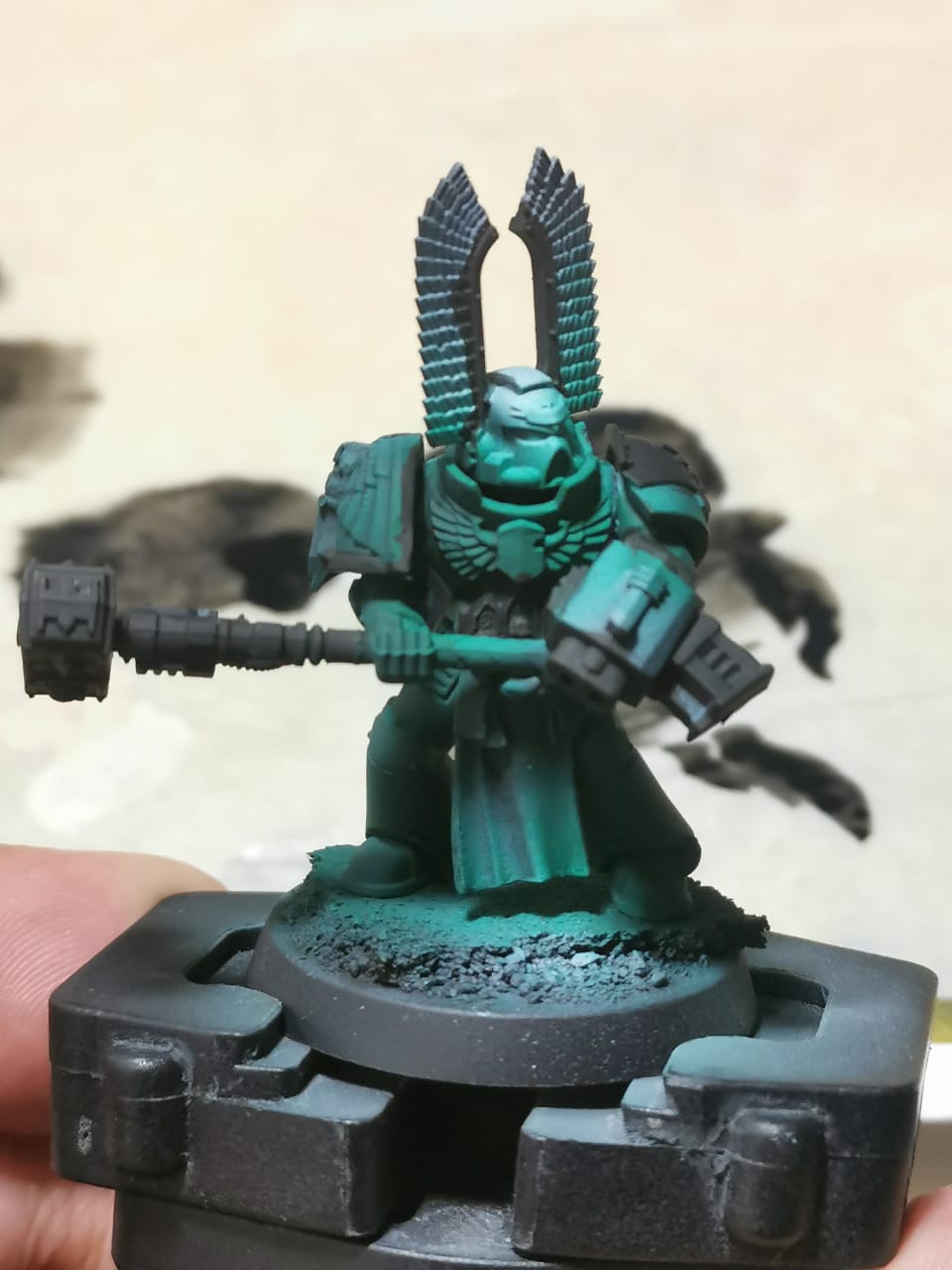 Slow and steady wins the battle...

More pictures, as progress is made

And there they go 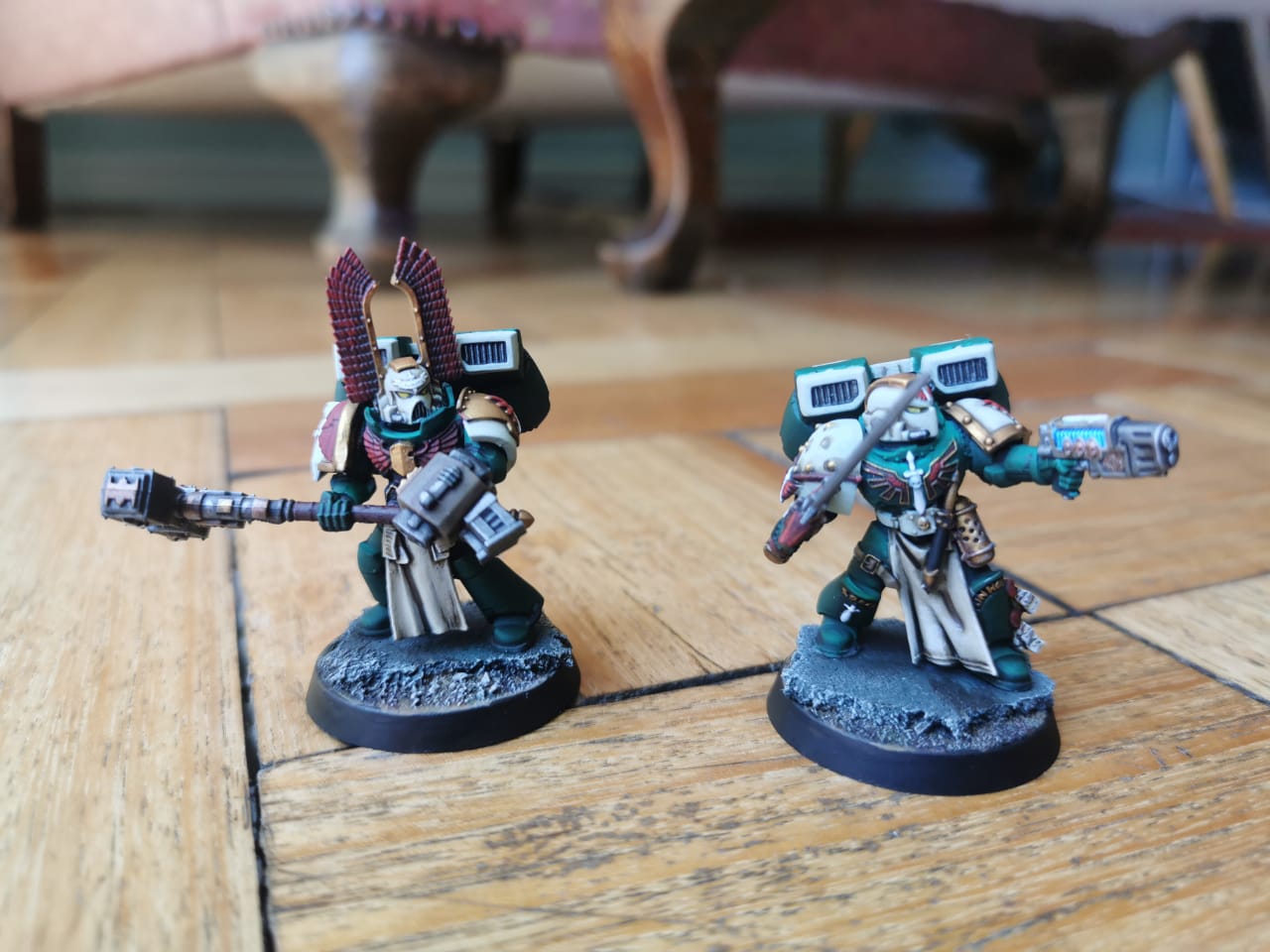 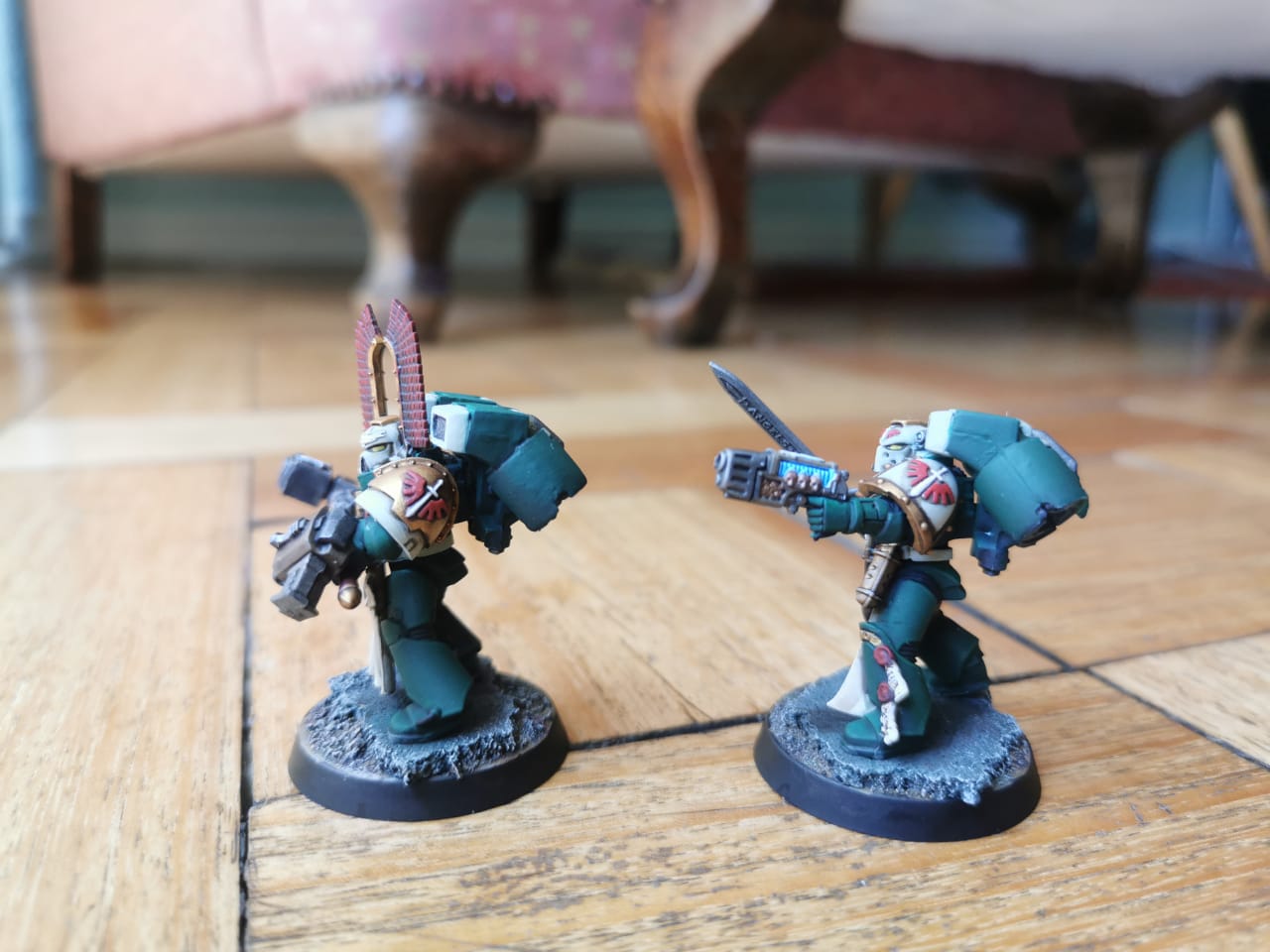 Ok so, here they are, finished. 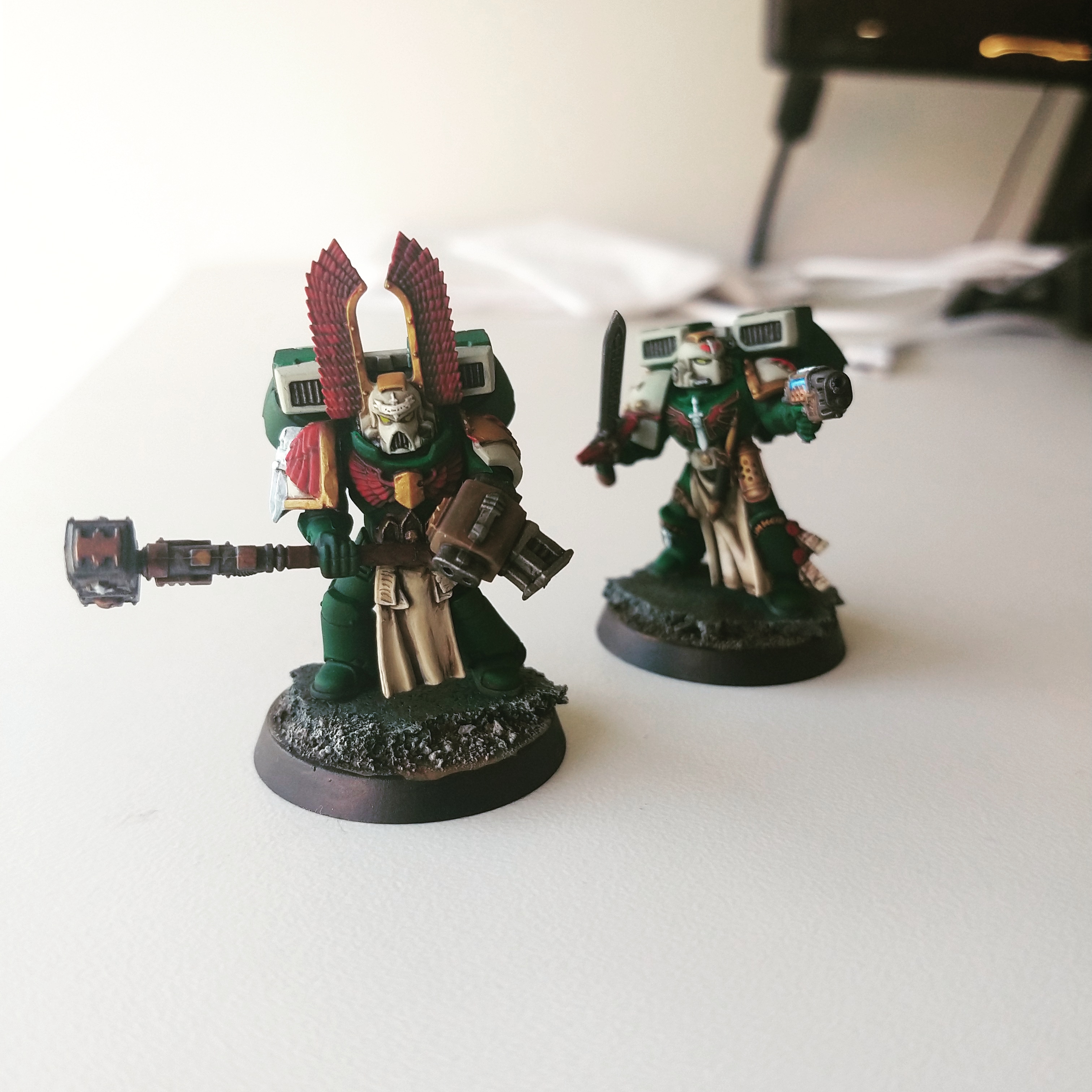 I like how the master managed to end up looking like the hammer has weight. Like, it pulls him to his side a bit? As if he is either winding up for a hit or finishing one, or even just raising the hammer.

The shape of the helmet forced the position of the face as full forward, when I had originally intended to have it tilted also a bit to face the side. To add more movement to the model. But that made the position of the jump pack impossible. Ir had to be placed in a very awkward angle.

Thisq position looks worse from the front, but waaaaaay better from up top. Which is how he will be mostly seen, once on the table.

Saddens me a bit that he could not end up posed exactly as intended, but I am happy he still manages to show the weight of the weapon in his posture.

Last stage of finishing up the First Demi Company, of the Second Company of the chapter.

The second half of the Assault Squad (2 bikers and 3 guys manning a darkshroud), and the demi company dreadnought.

With that, plus the 3 tactical squads, the devastator squad, the veterans, the command squad, the lieutenants and the master of the company, this part of the army will be "finished". 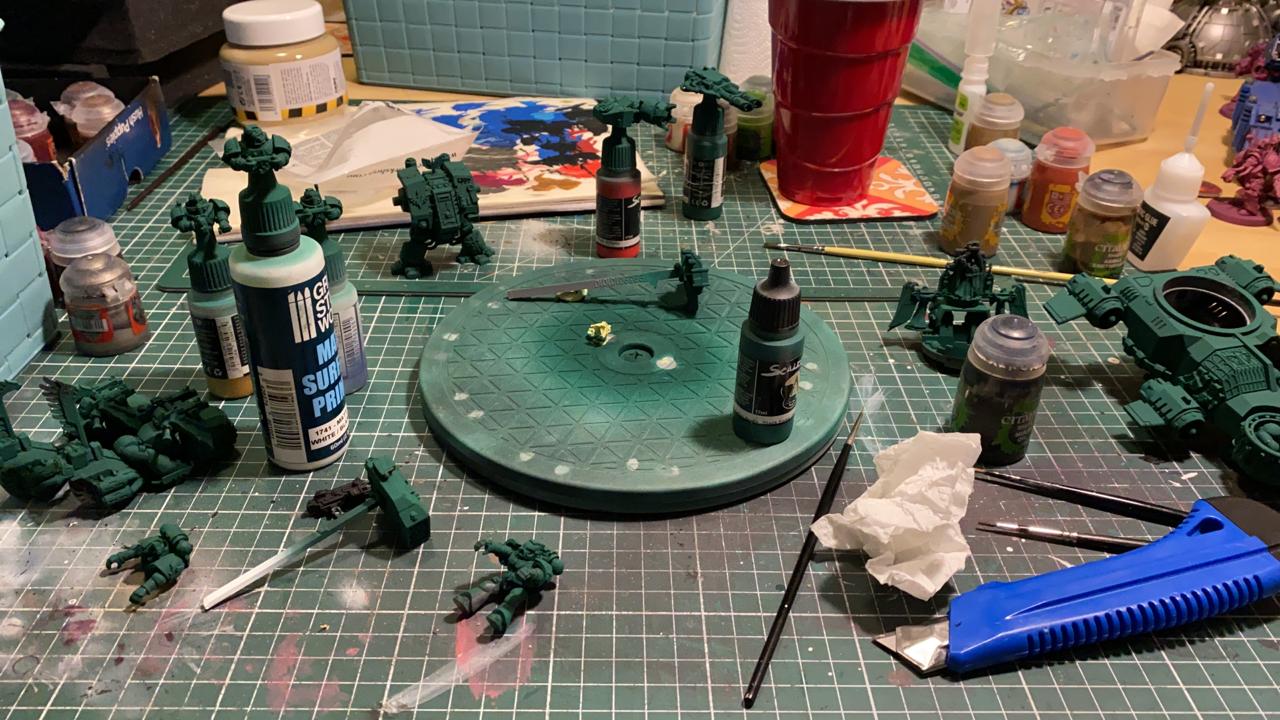 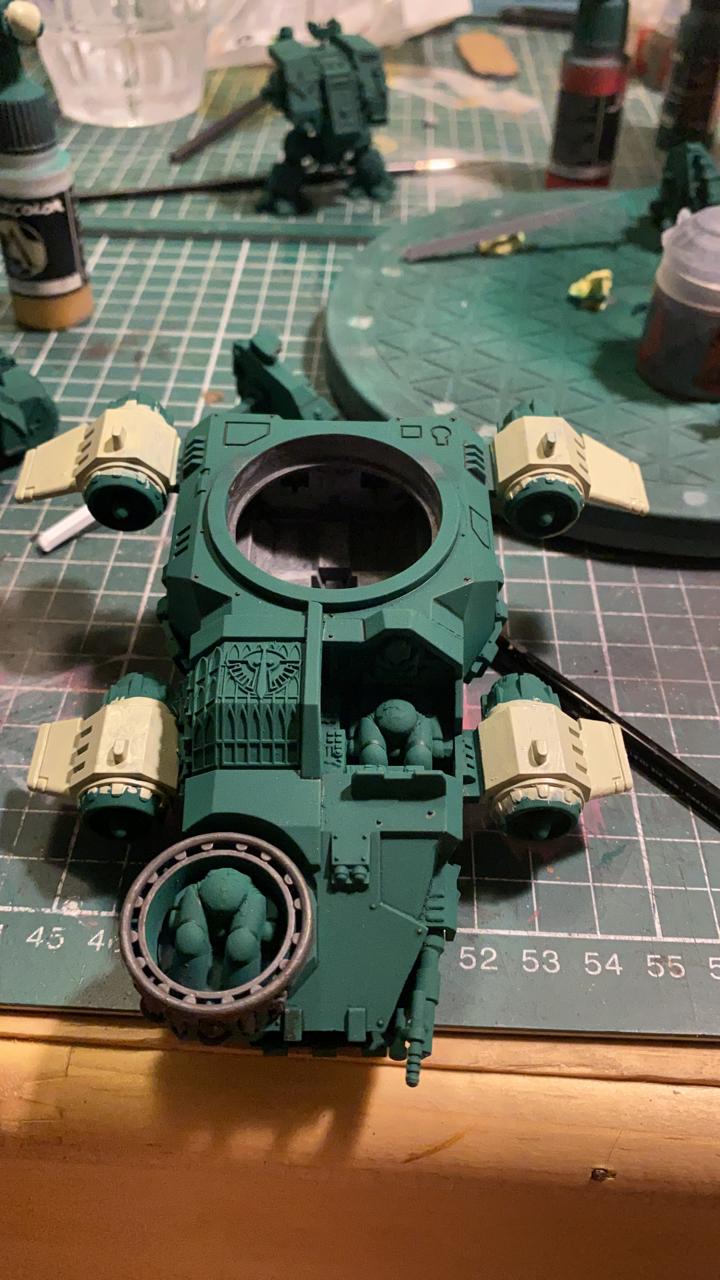 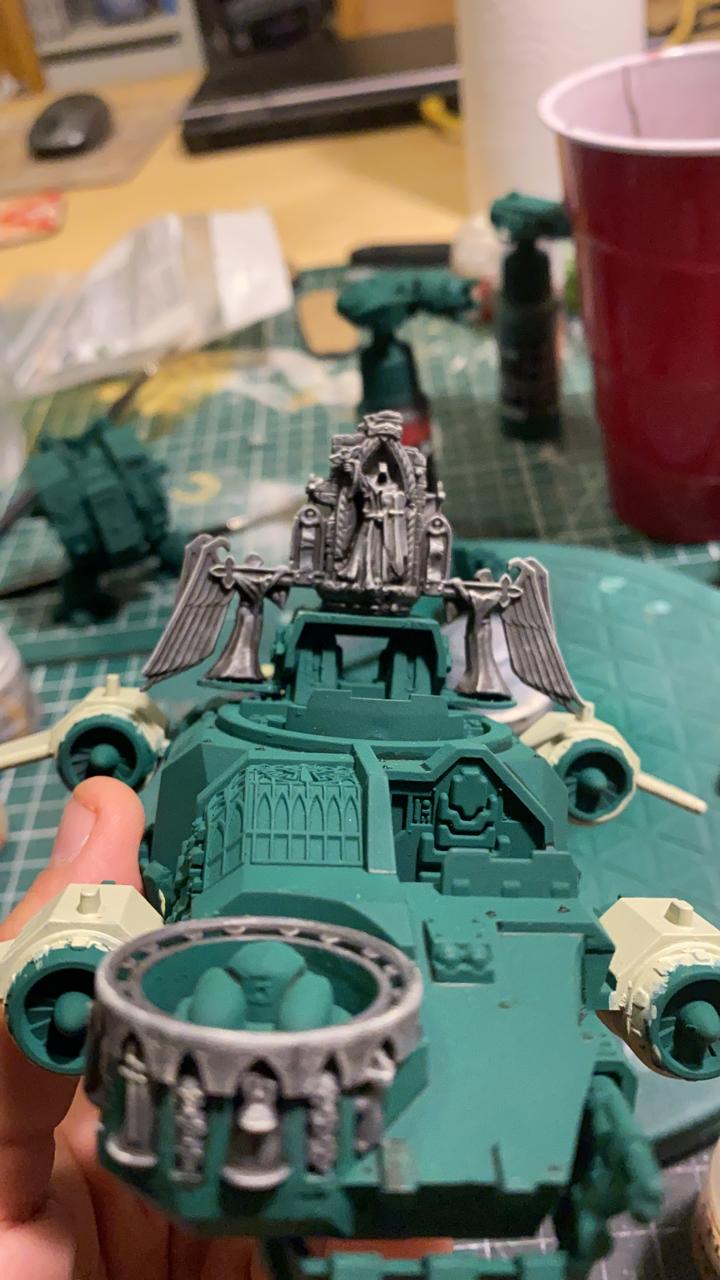 and after that, three whirlwinds.

Only the dreadnought is left, and the First Demi Company of the Second Company of my Successors, the Wings of Dawn, will finally be complete...

Here is the full First Assault Squad of the company, in their respective forms of transportation <3 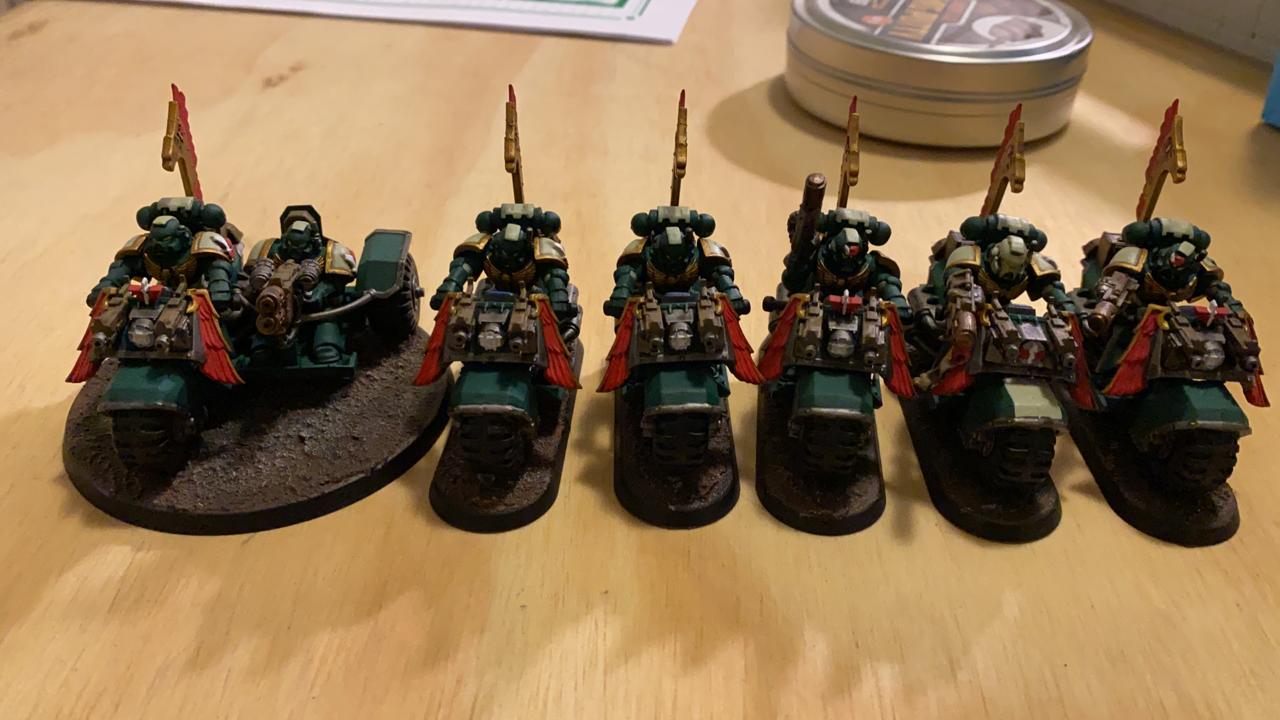 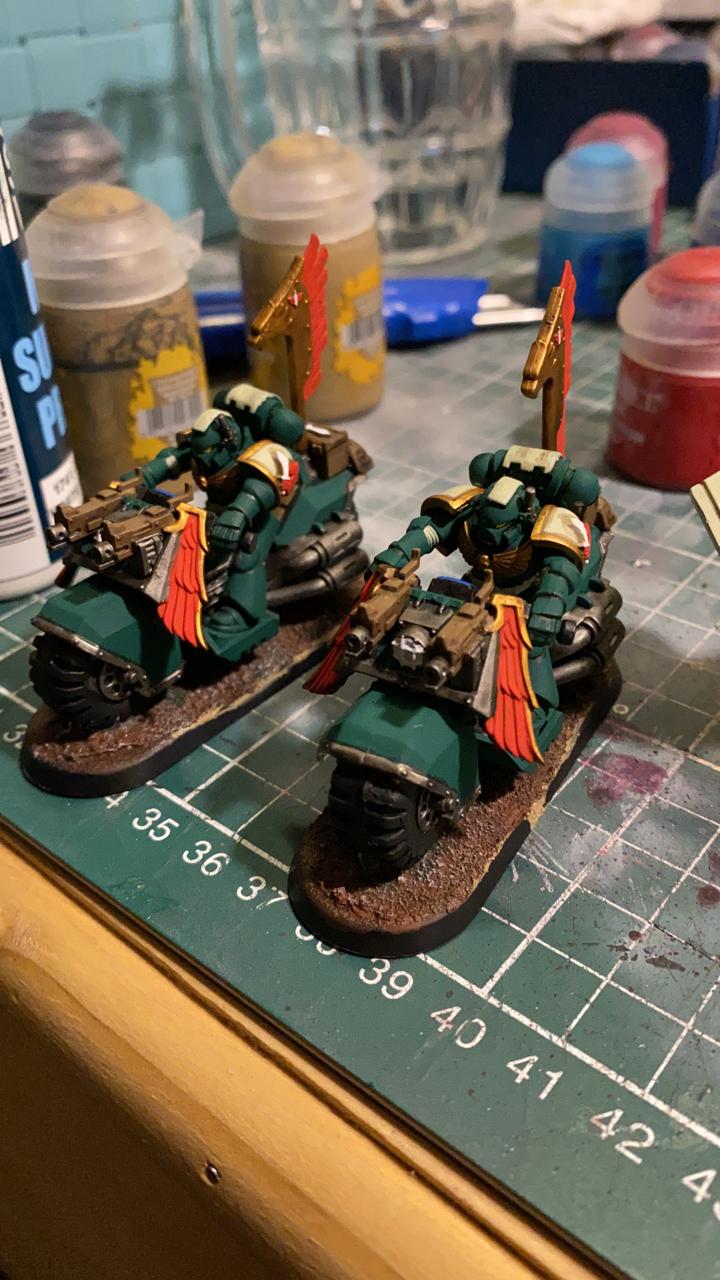 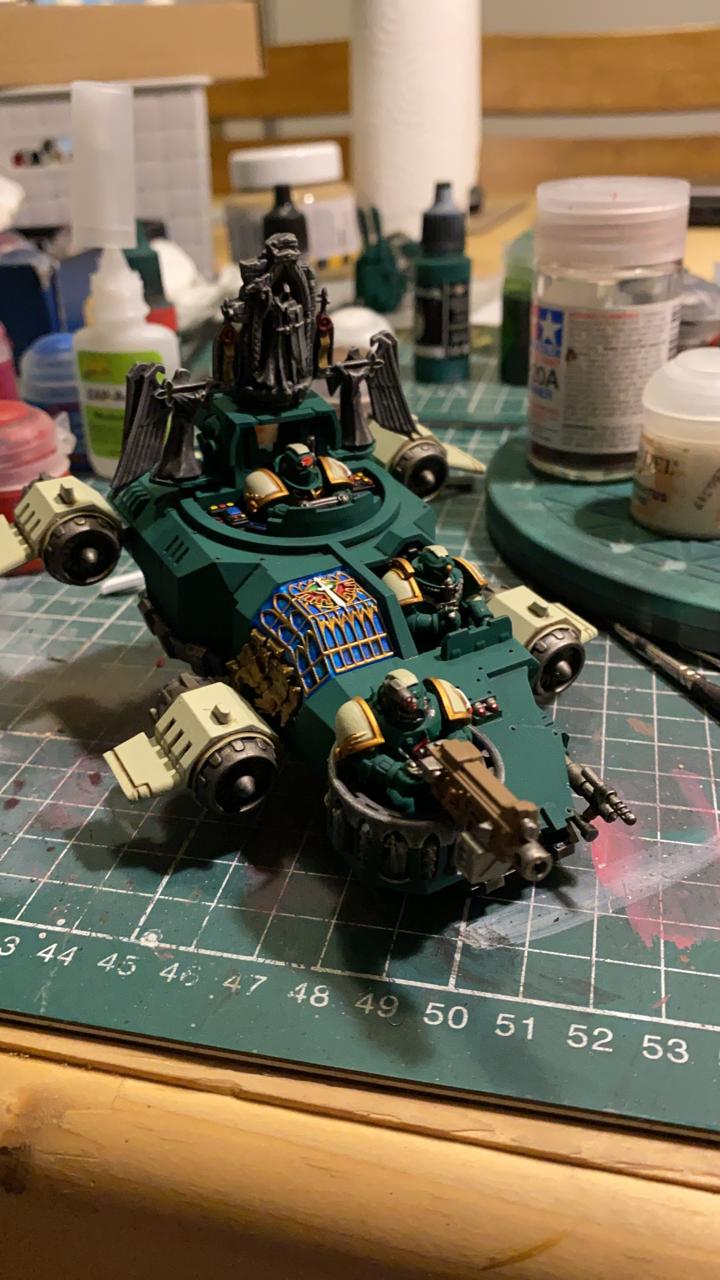 Into the final stretch to form up both the Chapter Command, and the 2nd Company of the army.

After these, all that is missing for the Chapter Command, is my techmarine, which will act as master of the armory. But, I never do play techmarines in 8th, so I might just get him done for a sense of completion, more than any practial purpose. At the same time, I am in the process of getting 2 rhino chasis tanks stripped down, to build them as Whirlwinds (got the turrets for it), so as to finish my 3 heavy support choices for the 2nd company.

This will mark a landmark in the army as a whole. I will have a full 2000 points brigade, as well as the chapter command in full.

Master of the Librarians, with 2 librarians in power armor for the Conclave, and a TDA librarian to lead the DW when in a combined arms army

Master of the Reclusiam, with an additional Interrogator in TDA

Master of the Armory

2nd Company First Tactical, Second Tactical, and Third Tactical (30 marines, deployed as 6 squads of 5 for the purposes of the Brigade)

Two Whirlwinds as support vehicles, assigned from the chapter armory to the 2nd Company

Along with that, I have 10 deathwing knights on the queue, with a deathwing ancient, and the Master of the 1st Company (a Belial Equivalent), and then 7 Black Knights and a Landspeeer Vengeance as a possible final project for the army.

Progress on the chaplains?

Well, here is the head of the interrogators of the chapter. My "Asmodai Equivalent". Despite the difference in gear, of course. He is just the most beautiful model I have in my army, for this purpose, so he is getting the title.

His crozius is painted in the color scheme of the chapter heraldry. His tunic bears the chapter colors. His chapter badge is crowned in gold, and the pauldron is of silver-white, as this is the color of the designation for Chapter Command units (i.e.: any model that does not belong to a specific company).

Your "counts as Asmodai" looks great! It's obvious you put a lot of effort in the model.

Ill pass the praise along. As I have stated across this thread (and it is never a bad time to reiterate it), I am not currently painting this army alone.

This mini has been painted by a very good friend of mine, who is quite a skilled artist.

Not a progress picture.

Rather, just wanted to share something fun that happened to me right now.

On whatsapp, a friend of mine was sharing a picture of his Night Lords Chaos Lord. A winged helm warlord, with a jump pack and a thunder hammer. We were discussing things, and I suddenly realized... 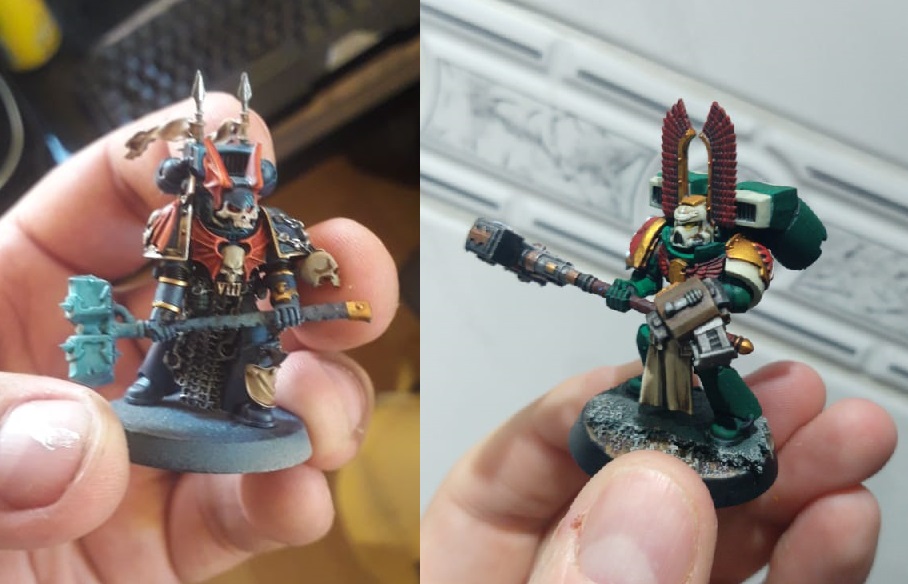 It's the Night Lords parallel to my own 2nd Company Master!!

... We have decreed that these two MUST fight it out, as soon as the pandemic allows us to meet on the battlefield.

Brother Dragomir, Master of the 2nd Company of the Wings of Dawn, wielding his master crafted thunder hammer "Felbane", versus Lord Skarrix, of the 8th Claw of the Night Lords. Both in jump packs, soaring over the battlefield as they duel each other with their thunder hammers.

I expect it to be quite epic, once it can happen.