Do you think Arch-Contaminator is the best WL trait for this army? I know it will help with the drones, but beyond that it seems kind of pointless. Would I be better off with +T or +1 DR, or something else?

Played a game against Custodes/Guard today, mission 5 (where you each have a priority obj to defend). I tabled him in the bottom of turn 5, but it was over by the end of turn 3. He made 2 big mistakes with his Shield Capt's and that may have slowed me, but not stopped me.
I will be changing my WL trait because after turn 1 the drones where to far away until turn 5 when he met back up with 1 of them. I'm thinking the +1 to DR is the best option for this list.
All I lost was my Hellbrute who died turn 1 to a Shield Capt that charged it, right after that my DP and a Greater Possessed erased him. The other SC charged a drone and should have piled in to my Leviathan, that cost him that Capt.
I maxed out Old School and Recon, then got 3 points for King of the Hill. Not sure I should have chosen that one, but I misread that one. I'm not the best when it comes to picking secondaries, so that's on me.
He later dropped in 2 smash capt's. The first failed his charge towards the leviathan, I shot him off the table the next round. The second charged a drone, failed to kill. The next turn I charged him with my DP and GP, he disappeared also.
Up the left I ran Possessed, mower drone, my other GP, both Poxbringers, and my Sorcerer. They took out 3 bikes, 3 Custodes (w/2 halberd and 1 sword/shield), 5 sniper scouts, sniper assassin, Guard squad with mortar.
One drone took out 2 squads with mortar, his psycker, then tied up his lemun russ till my DP showed up to finish that and a Custodes walker out.
Fleshy Abundance was nice to bring back 2 Possessed and heal the middle drone for 3. Keeping my Possessed at -1 helped a lot, I only used Warp time once and strength twice. Smites went well also, missed 1 of 8 or so.

Thanks for sharing the batreps, congrats on the win.

So I changed my list up quite a bit, I dropped the everything from the CSM detachment and added a fortification network. Then I added some Blightlords and traded in some drones for PBC's.
I took the list up against Tau yesterday and it was a fun match. His list was something like this...

I believe that was the majority of his army, I may be missing somethings. We were playing the scenario 3: Nexus Control, with 4 objectives and you get a bonus point for holding all 4.
Again the map was Hammer and Anvil, so he got to sit back - way back and shoot. I did spend a CP to deep strike my Gnarlmaw, this was the first time I've used one and it sounded like a good idea.
I chose Old School, Engineers, and Big Game Hunter.
He chose Old School, Big Game Hunter, and Gang Busters.

He built a nice castle way back on the left with the exception of 2 units of fire warriors and spotters way back on the right in some ruins.
I on the other hand put most of my stuff on the right to charge up the board (hopefully keeping out of LoS). I did put both Nurgling units on the left objective halfway up the board and spread my plaguebearers out across my back field. Looking back I should have screened my army with them, but after turn 2 they were holding 3 objectives and were engineer's. So at least they scored me 4 points, but I could have done that with my Nurglings.
I did get first turn, moved most of my stuff up the right as planned. Psychic phase was dismal, only got Blades off onto a DP and failed Miasma. Shot at 2 of the fire warrior units, killing some, but not enough, so no First Strike for me.
His first turn he shifted everything to the center of his deployment with the exception of Y'Vahra, who moved up to take out the Nurglings. After a lot of shooting, he managed to kill 1 unit of Nurglings and do 3 damage to 1 of my PBC's.

My turn 2, I moved more up the right with the bulk of my army. I positioned the Leviathan to shoot Y'Vahra and 1 of my DP's that direction. Dropped my tree between the objective on the right and his deployment zone and the Blightlords in ruins near the objective in his deployment. Psychic phase, healed 2 wounds on the PBC, failed Miasma. I was able to shoot and kill 1 o the fire warriors units from earlier and get Y'Vahra down to 5 wounds. I charged my drone and other DP into the other fire warriors and a marker light drone, killing both. His turn he really only moved Y'Vahra back and did more shooting. He failed to kill anything on his turn, just wounded a PBC and a few Blightlords.

My turn 3, I used the trees ability to allow my daemons to advance and shoot/charge getting my BPC's, other DP, and both Poxbringers in his face. I did heal 3 wounds on the PBC with the stratagem Revolting Regeneration. Psychic phase, healed the PBC more so it was only down 2 wounds and failed everything else. I finished off Y'Vahra with my Leviathan, shot the drone into the last fire warrior unit, then spent the rest of the turn shooting at his Riptides (aka killing drones). Some did get through, they were sitting at 9, 7, and 7 wounds left. Charged the last of his warrior unit, Fireblade, and Darkstrider with the DP and drone. The drone and a failed morale test took out the warriors, while the DP killed off his warlard Fireblade. And I had pinned in Darkstrider so those two couldn't be shot at. His turn he measured and decided he couldn't move his Riptides with drones, so he stood still with them. He re-positioned another unit of drones and Shadowsun. He was able to get 3 more Blightlords (leaving me 3), he finished off my Nurglings, and took the PBC and a DP down to 2 wounds each. At this point I held all 4 objectives and started scoring the bonus.

My turn 4, moved the drone from combat towards the 3 Riptides, moved my Blightlords and other DP into charge range, and the Plaguebearer horde just sat there guarding the other 3 objectives. Psychic phase I cast Fleshy Abundance and chose to heal the BPC instead of the DP, so it was sitting at 4 now. Then I got 3 smites off, Darkstrider took 3, a Riptide took 4 after his Feel No Pain. The PBC's and Drone ended up killing more drones with some damage to Riptides getting through. The Leviathan finished off one Riptide and I charged the last two with PBC's, DP, Blightlords, and a Poxbringer. Failed to kill Darkstrider in combat and managed to get 1 of the Riptides down to 1 wound, the other had 4 left. His turn he moved everything out of combat and then shot at my BPC with 4 wounds left, hoping he would kill that off so he could shoot Shadowsun at my DP. He only managed 2 wounds, I sure was glad I healed that instead of my DP. So he had to shoot Shadwosun at the PBC also, managed to kill it with no explosion. His other Riptide shot my Blightlords away.

My turn 5, moved my characters and drone while leaving the PBC's and Leviathan alone. Got off a smite to kill Darkstrider and another killing off a Riptide. Shot and shot and shot the last Riptide... killed off the last of his drones and only wounding it 3 more times. I also managed to kill off his last spotter drones. So the Riptide was down to 1 and nonchargeable because of the terrain it was on. So his final turn, he moved and shot. Shadowsun killed off my WL DP and the Riptide shot at the other PBC failing to kill it.

After all was said and done, Nurgle defeated Tau 31-15. Fun game and we are to have a rematch this weekend.

Really unsure about the blob of possessed. If you wanna do a deathball you could take better units imo.

Really unsure about the blob of possessed. If you wanna do a deathball you could take better units imo.


So which units could I take that are better in your opinion?

Just another iteration of my army as I prepare for an upcoming tournament. I had ran some Haulers with the Gnarlmaw against Tau that I had won 31-21. My opponent is a good Death Guard player and he advised me to take Morty. So I dropped the tree, haulers, and some Blightlords to add Morty and a sorcerer (for warp time) and came up with this. I know Morty will either win me the game or lose it for me, but I do like the model and hope it's more on win side. I plan on keeping the Lord near the PBC's for the re-rolls, if I need to move them cast Prescience on one and using the strat on the other so they are still hitting on 4's. Try to use the Daemons to hold objectives while they focus on Morty and let my heavies do damage. If Morty makes it into combat that's a bonus, but he's more or less just there supporting my plan(s). 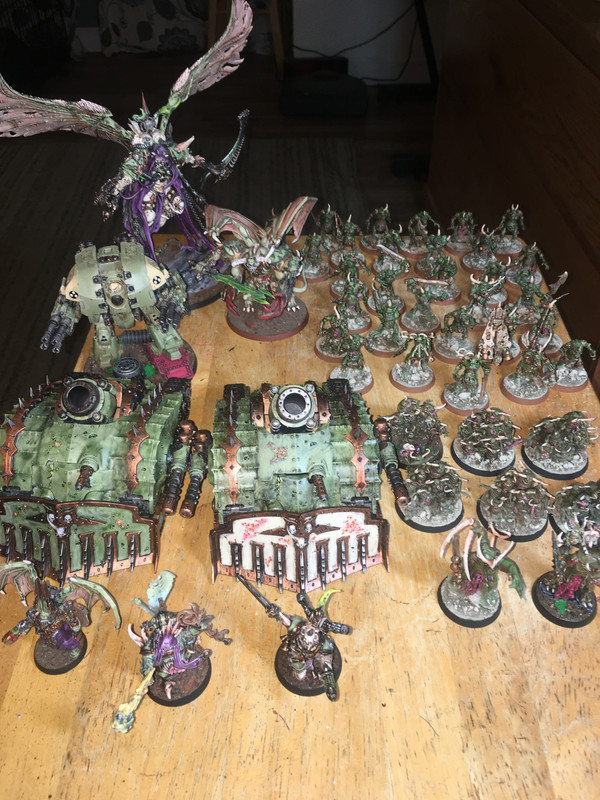 With morty I see better some renegade knights/lord discordant. Also I would make the supreme command of thousand sons, ahriman, DP, sorcerer in termy: easy warptime, death ex, etc...
Deathshroud would help him a lot if you go second also. Have you tried the list yet?

Yes, went 3-2 at a tournament. Lost the 2 games I went second and both to knights/guard. Beat a Nurgle Daemon, Death Watch, and Tau. They were all close games with the exception of the last knight game, I got tables rather quickly.
Having some Deathshroud would have helped. I agree with the 1Ksons, but I try to stay DG/Nurgle.

Back to Death Guard Army Lists