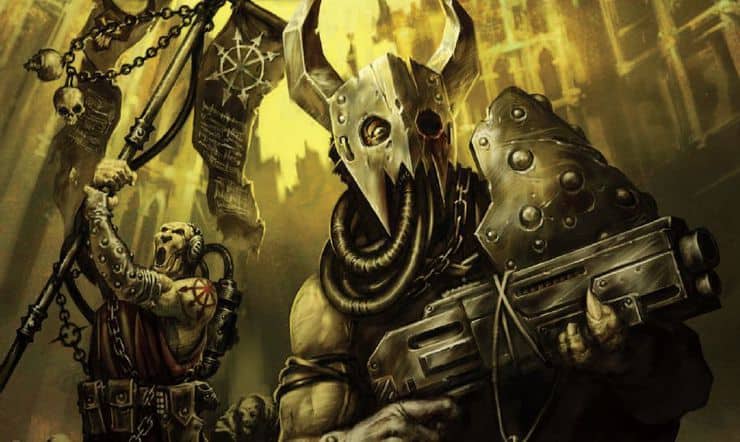 GLORY TO THE DARK GODS!

I am taking part in a Necromunda campaign that has started just last week, and want to document my progress in this thread. When I first heard about this campaign, I wanted to use my Walking Pox. All models for the campaign had to be painted, but unfortunately I could not get enough models painted in time to make a reasonable gang (getting the conversions needed done in time was the biggest problem). Luckily I was also painting another Chaos Cult at the same time, for Turf War II - and those got done in time!

Me being me, I could not make up my mind about the final list until the last minute. This also meant that I was short a painted model after all - but the flamer could count for a grenade launcher for the first week, so it was not a real problem.

Since every model had a chaos star somewhere - which I had always painted bronze - I thought that "The Order Of The Bronze Star" was an appropriate name for my gang: a zealous cult, pretending to worship the different aspects of the Emperor, while secretly being a Chaos cult. Their background story will be developed over time.

This is using the models I have painted - with the exception of a grenade launcher - eleven bodies and 985 Credits in total:

That's it for a start. There will be a review of my first game tomorrow!

We play a Dominion Campaign, in the "Into The Unknown" version. This means that territories are not known in advance, and one is drawn at random for each fight. For my first game we drew a Corpse Farm - in theory this was great for me, since Chaos Cults are treated as Cawdors when it comes to territory boons, and a Corpse Farm grants Cawdors an enhanced boon. In theory...

This was my first Necromunda game ever, so not only was I up against an opposing gang with all its tricks, but I was also playing sort of against the rules itself. I was up against a Van Saar gang composed as follows:

We played the scenario "Tunnel Skirmish", and during setup I made the first of many blunders. I allowed for a central open area, and set up my barricades pretty random, while my opponent set up his side with coherent cover. There were three smaller "rooms" on my side and a big one on his side, all closed off by doors.

In setup I split my gang into three groups, with my demagogue and disciples split between them. The Van Saars were spread out in their big room.

Turn One saw us both advancing towards the doors to the central area, with nothing else happening.

It was in Turn Two when things went south for me. By a combination of stupid activation order and bad placement, I got both my Disciples as well as a Helot taken out of action (by Rad Cannon fire) - so that was all my "heavy firepower" gone already! In the end I had most of my gang out in the open with nonideal cover, while the Van Saars had clear lines of fire set up, and hugging solid cover on their side.

Turn Three saw some stupid activations on my end again, resulting in no real problems for the Van Saars raining more radiated hellfire on my poor religious fanatics. Sister Khereas, while managing to make it into close combat, did nothing and got taken out of action in return by Gamma Sand. In return I managed to seriously injure Gamma White, by Brother Syrus and his Stub Gun. At the end of the turn, the Van Saar rolled badly, and had to bottle out. This, and the prospect of killing him off by a coup de grace in the following turn, let me to the really stupid decision of playing another turn. Why stupid? Because I had lost four models already, and of the remaining six only two were standing at the end of this turn. I should have legged it, but Khorne seemed to have blinded me with blood frenzy...

With only two models left on the field, Brother Sylas and Brother Syrus decide to fight for the glory of Chaos another day, and flee.

The post-battle sequence saw four of my gang going into recovery, with Brother Jâgo and Askelitar Azor suffering an eye injury (-1 BS) and Brother Ashkimander being humiliated (-1 LD and -1 CL). Notice that three of these got taken out only in turn four...

For yet another kick in the nether region, Brother Kalys got captured. I got the offer to have him back without his Heavy Stubber, and agreed. Buying my de-facto champion a new weapon was cheaper than buying a new champion - I was not looking forward to a rescue mission at all!

Fate smiled on me with four more only being "out cold", meaning they suffered no further injuries and were back for the next game. I also rolled well for the Trading Post, resulting in Rare (13) items being available - enough for eye bionics!

A tried to perform a Dark Ritual, but needing a 9 I rolled a 8. Quite fitting for a game with downright horrible luck on my end so far. On the other hand: why would the Chaosgods favour my gang after such an aweful performance?

My income ended up as not horrible, so with my initial stash I had 100 Credits to spend. A bionic eye for Askelitar Azor, a Long Rifle for Brother Kalys and the recruitment of a Slopper left me with 5 Credits in the stash.

The gang after the first game on Yaktribe.

I had a Slopper built already, and with four models in recovery he could prove his worth as early as next game already! Now I only had to paint him, convert and paint a model for Kalys with a Long Rifle, all in time for the next game...

So while this battle went really bad for me, the most important thing was: I still had fun. It was engaging from start to finish, and I had an excellent opponent guiding me on any rules question I had. Many mistakes were made (mostly by me), but the game was what it was. The next one could only go better for me!

So yeah, that was that. I am looking forward to the next game already, hoping for a different outcome though.

That sounds proper rough for you what was the gang rating of that Van Saar gang? Two Rad Cannons?!

It was a normal starting gang for 1000 Credits - the campaign has just started. It sure was a brutal game for me.

Hope you enjoy your campaign Darnok. I've just wrapped up the campaign I was arbitrating. It was good fun, but it essentially acted as an extended tutorial for Necromunda as none of us had played the newest edition.

Looking forward to seeing how your campaign progresses.

Well, at least for me it is a similar situation. I have never actually played Necromunda before, and to quote Yoda: much to learn I still have. One other player has also just played his first game ever, so at least I am not alone in that regard. Two others are much more experienced though, and I have no idea about the other two. We are in the first week of the campaign, so there is a lot of time left.

If you want to share some more details about your campaign: I would love to hear about it!

They're in my thread, so I'll not clog up yours. As I said, we've finished now, so I'm hoping to post some thoughts and pictures in the near future.

I normally don’t give my Helots Armor - and instead go numbers but I’ve seen it done both ways.

Don’t underestimate the Chaos Spawn as it can ignore Pinning, Flesh Wounds and Serious Injuries - and usually has T4. Even if it’s stats are abit random.

The thing with numbers is: when do they really matter? Most scenarios cap gangs at ten models at most (often less). I had four models more in my very first game (not that it helped me at all), but the very same Van Saar gang had some more good games and is now ten strong as well. Now each of my crappy dudes is faced with one elite dude, no matter the numbers...

As for the Chaos Spawn: the only way to get one is roll 1/1 or a 2 after modifications during the ritual, isn't it? And only if a (random) cult member is the rituals focus. Plus losing it after a battle is a nontrivial possibility. So I could lose a champion to get the Spawn, only to see it leave after its first battle. Don't get me wrong, the Chaos Spawn is potent on paper, but it comes at quite a price, with lots of uncertainty attached.

Don't feel too bad about losing to Van Saar, they have the ability to be one of the most unfun gangs you can face. I've found that the Van Saar player has to really go out of their way to make them enjoyable to play against (the same can said of Venators as well).

Necromunda has always been about the narrative, so if your group can keep that in mind when designing their lists, they won't go far wrong.

If your group wants a more competitive aspect I'd look to tactics cards to help balance the gangs out. White Dwarf also released some game levelling rules for Necromunda if the gang disparity is too great (basically the difference in the gang's ratings are levelled by allowing the lower gang to make up the difference using scummers, bounty hunters & tactics card for that particular game).

As for Chaos Spawn being a bit risky to get.....you're playing the wrong gang if you're not prepared to sacrifice your gangers for the glory of Chaos

As for Chaos Spawn being a bit risky to get.....you're playing the wrong gang if you're not prepared to sacrifice your gangers for the glory of Chaos

Nah, I'm fine with that. I'm actually looking forward to the next ritual attempt. Just saying that the cost and risk attached to a Spawn is considerable - not that I despise it.

One other thing to consider is the Dark Blessings Tactics card. If your Demo is Seriously Injured - he turns into a Spawn. Nasty surprise for your opponent. After the game, he’s back to a Demo but you have to roll for the outcome of Seriously Injured (which you’d have to do anyway).