400 replies to this topic

I think it would make sense to re-release the BRB every few years, with all the updates and FAQs included, as edition 8.5. That way they are still getting money from a new book release and there is less work going into making new rules set. That's what I'd like to see anyway.

i could see 8th spilling into an 8.5 sort of thing.

Didn't see I double posted, but I like some of our new options, eliminators look good but I don't know about the small squad sizes with Las fusils, doesn't seem like enough dice, but could be fun putting them wherever you want. What is everyone using for anti-tank these days?

Didn't see I double posted, but I like some of our new options, eliminators look good but I don't know about the small squad sizes with Las fusils, doesn't seem like enough dice, but could be fun putting them wherever you want. What is everyone using for anti-tank these days?

My Anti Tank i try to keep diverse. Competitively i run my leviathan which is good AT, Long fangs, Relic Contemptor with autos, and Wulfen in a stormwolf. Later this year im bringing a Venator which should be fun.

They could easily throw a "The Emperor's Rulebook" (like the General's Handbook for a certain other system) at us every 2-3 years to update the basic rules and weed out a few odd ends.

They could easily throw a "The Emperor's Rulebook" (like the General's Handbook for a certain other system) at us every 2-3 years to update the basic rules and weed out a few odd ends.

A telling Q in the big survey was how often points should be updated and looks like theyre going to 6 months. A download with the FAQ would be amazing

Probably gw will do as "little as possible" to update us judging by the pdf's.

Reference is police dogs holding prey down while the officer catches up.

A nice little rule that would help bring them back to the table.

Another one is to put them on biker bases instead of round bases, they can then fight shoulder to shoulder in cc and more wolves would be able to fight if it's a very large pack.

I think primary Marine dexs are getting 2.0's starting with da next month.

Then I expect blood angels 2 months after, and I don't expect wolves til March. (Me being hopeful)

Frost weapons do need a rework.

Universal Frost rule. On a to wound role of 6, add 1 mortal wound.

Or is this making them to good?

With the number of attacks we are getting now I don't think anything outside relics will get any more +1A unfortunately. For example (I'm replacing my GH with intercessors at present and have decided to make WG w JP out of the GH) a ten man WG squad, with 4 SS and everything else WC's, you're talking 37 S5 AP-2 attacks. With any of the possible extra attack sources (Arjac!!!! Wulfen Stone, unlocked Wolfkin...) this can become 47, 57 - and all three - 67 of those attacks. Rerolling wounds. If they DS in with a lord with a JP (which I have just base coated) these genuine angels of death are my anti-Mortarion strike force (if I'm wrong, at least it will be spectacular).

I would like to see relics get improved, the burning blade makes me very jealous. Frost weapons are iconic but IMHO WC's are incredibly powerful with only minor to hit buffs, on the same basis as massed bolter fire, just more powerful albeit harder to get in. While not frost weapons they are unique to us and while costly save a lieutenant having to be included, and are better than him anyway.

I'd like to see On The Hunt TWC as an absolute basic inclusion but other than some point drops I feel (having read the new SM codex) we are not that weak. Just stop taking big guns and focus on tearing up in CQC. Remember as well, as soon as you're in you're shutting down big guns even if you can't kill them. And I'm no mathhammer guru but 57 WC attacks is going to mess stuff up. Any stuff that isn't a titan. Like, really do work.

Our characters are strong and if chosen we'll can make a well designed force very good - not forgetting options with new units like eliminators who are really pretty darn good and compliment a foot slogging force very well indeed. A Primaris Arjac seems appropriate (I do have a wee crush atm I'll admit it) or Ragnar, and that will change everything. Who knows, if you want a legit wish how about a Primaris Ragnar in a new Primaris pod which only we have access to for a few months. Would potentially make us so powerful it would be rage-making for everyone else.

Frost: unmodified to-wound rolls of 6 cause a mortal wound

Helfrost: Frost + units wounded by this weapon have their advance and charge rolls halved until the shooting player’s next shooting phase. (I think preventing overwatch would be better, but too much overlap with suppressors)

Hoarfrost: Frost + models wounded by a weapon with this rule have -1 to hit until your next fight phase (for taking on monsters and characters)

Let the Wulfen squad leader be equipped the same way as his unit.

PsyberRaven upgrade - enemy units deploying at the start of the battle have +3” to their minimum distance. -1 CP needed to use the Chooser of the Slain stratagem

Frost: unmodified to-wound rolls of 6 cause a mortal wound

Let the Wulfen squad leader be equipped the same way as his unit.

For frost weapons I'd rather have them add +1 str and +1 damage and then cost more than a master crafted because of the +1 strength.

I'd like to see a stratagem like the vigilous detachment where a unit gets a bonus to charge rolls if another unit is engaged.

I really want the veteran Intercessor strats, and if successors are mentioned the chapter master one as well.

I would love this, except we haven't seen enough options for primaris yet. Would love to have our original index rule that allowed SS/Rifle/melee weapon..

If you want your army paint scheme made in Impcat just send me a message.

I would love this, except we haven't seen enough options for primaris yet. Would love to have our original index rule that allowed SS/Rifle/melee weapon..

Itd be a moneymaker for them too

Second the Alpha Predators USR for TWC, add to TWM.

WGPL needs to be sent the option of SS/BG/Melee, even if it costs points to do so. I think with how lackluster SM's are in general right now given all the sudden and needed buffs with the new 'Dex, 2 to 5 ppm SS's makes sense. I expect GW will try; what comes of it remains to be seen.

Hm... going into the reaching for inspiration category...

Maybe have PWGPL be some kinda mini Company Champion? Basically, the model we can build and some seem to favor is the CSw / CK / BR IC of some sort. Why not make that an official model? Maybe a single pack of IC's per three or all can take a LCC, Light Company Champion? Call him the Company Duelist, or something.

Load up 18 TDA WG into the Primaris Spartan.

I think my last wishlist item is this: Primaris can ride in the vehicles it makes sense to, such as, LR Hulls, Spartans, Storm Eagles, and any other model able to move TDA infantry. That way, even if the LR has either 8 TDA WG or 8 P-IC's, at least they can get a ride.

Oh, final addendum: Primaris need a Rhino equivalent, with 10 models, at least, and the option to make a Razorback version. This recent one with the turret on it that could reasonably be removed and used in much the same way would be spot on, to me.

I would add " alpha predators " rule to fenrisian wolves when their squad size is 10+.

( To encourage using them )


Fenrisian wolves added back as optional equipment, and given (protect the alpha ( only protects your warlord, basically drones protection protocols from Tau).

Any other ideas to make fenrisian wolves viable? I love the idea of actual large packs of wolves fighting with the astartes.

Stormrider's flurry of teeth and claws doesn't benefit from canis. It should.

Should Logan grimnar on stormrider actually be an open topped transport?

Would solve the big target problem. Logan could jump off to climb buildings etc.

I do think if storm rider was a separate model with Logan being able to get on and off it would be much more usable.

Frost weapons and Runic Armour are likely turning into relic-lite equipment akin to Special Issue Wargear in the supplements.

I have this feeling, this art piece reflects a wolves specific unit.

I dunno why, but my gut says, a unit of tacticus armor with those axes and heavy pistols 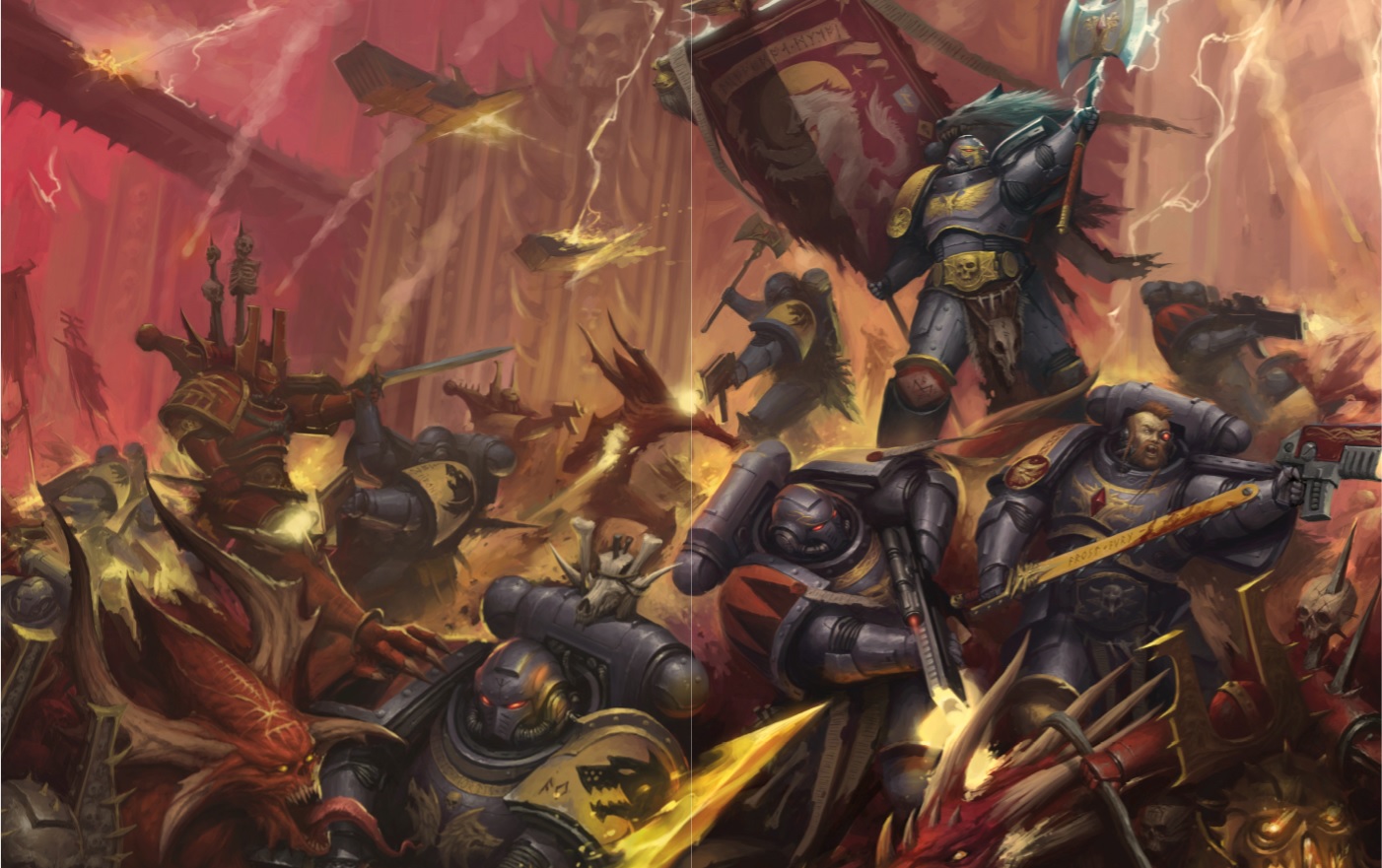 so this was on the psykic awakening page and we arent on it.

dunno what that means

and GW just removed this image from there site 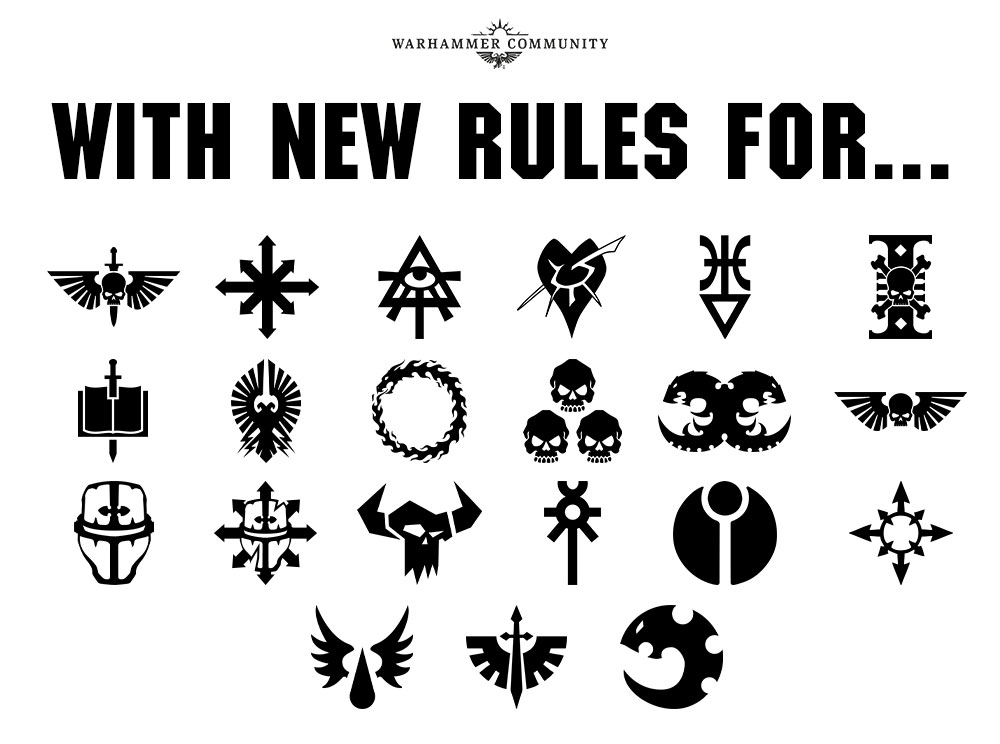