21 replies to this topic

As the title says, this is where we can brainstorm fresh and unique Enhanced Chapter Tactics for our Grey Knights. I already mentioned a unique one in the other thread, but this is where i'll probably continue to add anymore, and discuss with other members their own cool ideas for Grey Knights CTs.

I'll start off with the first one I presented: 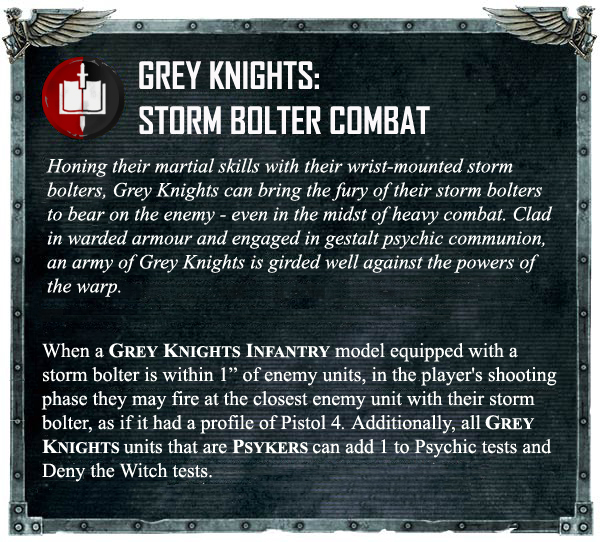 Another one I thought might be very GK fluffy: 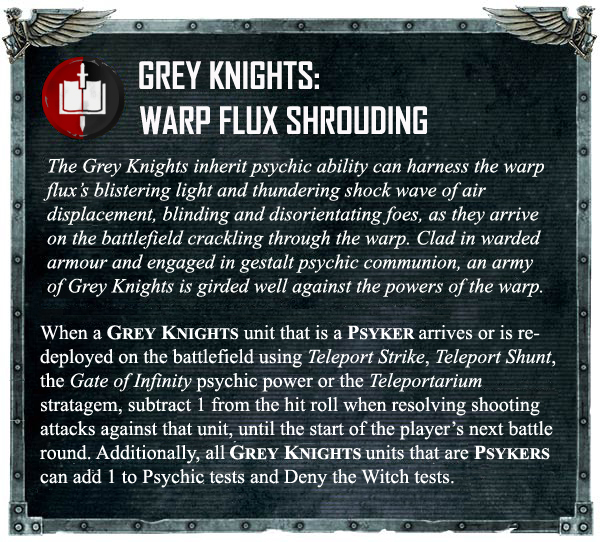 NOTE: The above ideas as shown in the images, adds onto our current "Chapter Tactic", Brotherhood of Psykers much like how they have been combined with the official Enhanced Chapter Tactics shown for Codex Space Marines.

You seriously made it look like something official? You just know that it will be all over BoLS, reddit and various facebook groups as "trustworthy leak from an insider" within a week.

How did you do that, looks like it came from the actual codex! Can't think of anything right now, I will share if I have any ideas.

I really like that warp shrouding idea, seem fluffy also!

Why not make Psybolt Ammo a Chapter Tactic rather than a Stratagem?

Hearkening back to 5th Edition, Pysbolt Ammo could provide +1 S to all projectile weapons fired by GK units. It would exclude incinerators, lascannons, missile weapons, and melta.

I really like that warp shrouding idea, seem fluffy also!

Yeah, I think it can help with GKs surviving that little bit longer, especially if we fail the charge after deep strike. It's also a nice little nod to their 3rd Edition Shrouding ability -  which had the chance of preventing enemy units shooting at them.

Why not make Psybolt Ammo a Chapter Tactic rather than a Stratagem?

Hearkening back to 5th Edition, Pysbolt Ammo could provide +1 S to all projectile weapons fired by GK units. It would exclude incinerators, lascannons, missile weapons, and melta.

Definitely a consideration. As a 2CP stratagem can only help out so much...and Codex SM are getting free AP buffs to weapons through their Battle Doctrines. Precedence has it that GW seems to be wanting to keep it as a Stratagem currently, still with potentially Codex 2.0 coming around (we need to see how different the SM Codex will be), things could change for Psybolt ammo options for GKs.

I do really like the warp flux thing. Definitely would help somewhat for survivability.

But I'd like more freedom with psychic powers. Id like multiple casts back. Now I understand certain powers would likely need to be limited (maybe only level 2 psykers and above?) as Casting purge soul/vortex 8 times a turn will of course be a tad too good. But the basics like hammerhand should be allowed.

The warp shroud ability would definitely help A LOT:

.You need to get as many units in close combat as you can,

.Why can't we get buffs?

*We are the hammer:

When a Grey Knight unit charges, is charged

or made a Heroic Intervention, this unit gains

+1 to their strength/, Wound rolls/ Attacks.*

(Not sure which one to pick, maybe strength and wound rolls)

My thoughts on Psybolt ammo.

"In the Psychic phase a Grey Knights unit may fire their bolter weapons with +1 S and -1 AP. They may not then fire again in the Shooting phase."

I think, first thing GW should fix is getting to combat. Actually, after bolter discipine and shock assault, we can make descent damage. But being elite army full of 1-2 wound models and extremely expensive, we just cannot get in time in combat. Matched play restrictions is the first thing that won't allow us to be good.

Genestealer Cults stratagem that allows movement after DS is the best I can think of. More assault transports would be great too.

And that is why people some people have dreadknights, but still I understand what you mean!

All gk units have psybolt and baby smite (or real smite?) Psychic powers. Unit can use one or the other but not both on top of their other power.

Grey Knights can cast the same psychic power twice in a turn (besides psybolt and smite) so if you wanted to Gate two units.

To be honest I am more interested in the progress of Grey knights fighting and tactics than psychic powers at the moment as this is where GK are quite vulnerable and require new rules and updates!

In the middle of getting my ETL VII vows done, but while I was waiting for the paint to dry I was able to put together a couple more unique Chapter Tactics (as some have suggested above). Potentially, the following seem pretty powerful as they are somewhat game-breaking with current matched play rules - but again very lore-fitting for Grey Knights imo. 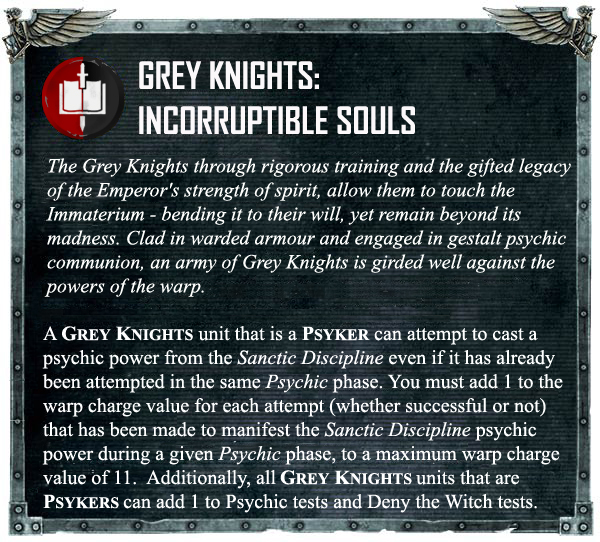 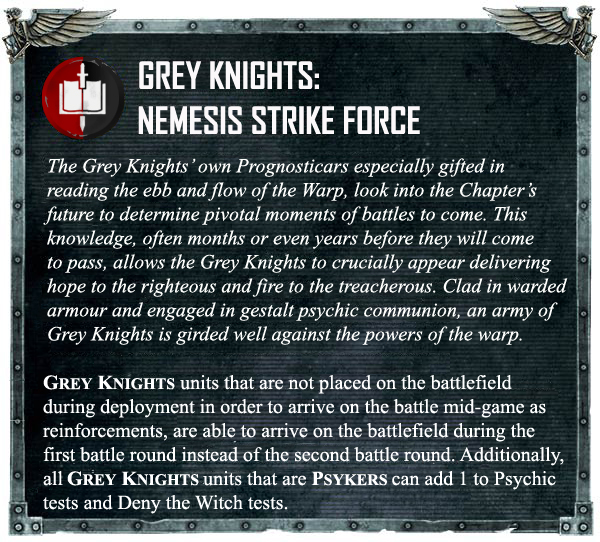 With the details of the Codex SM 2.0, UM / WS supplements being revealed what do fellow GK players think of the above, under-powered, overpowered, or on par to be able to stand toe-to-toe with the new SM buffs....?

Both very nice! Im definitely leaning towards the incorruptible souls, because we can then multicast gate to offset the lack of deepstrike, and we also get to multicast everything else which is great!


Still underpowered compared to the new marine stuff though. With combat doctrines they basically get 3.

Just to be fair.


And juuuust for the sake of it because its a wish thread.

3rd turn we get to call upon Mordraks ghosts and bring a terminator unit back to life haha.

Under what gameplay mechanic though? Just have them as 2 free extra rules?

Other army players would just question why would GKs be exempted while their armies aren't. When these rules were first introduced, and GK players criticised the restriction in these forums Open BETA Rules Board, our issues mostly fell on deaf ears.

Unhindered smite spam was allowed for us with the trade-off for having weaker smite, but how would the other two rule adjustments be justified? Here, at least I've presented each as a potential buff to complete the GKs equivalent Chapter Tactic, in line with other Codex SM improvements (an extra trait in conjunction with their current CT).

Other army players would just question why would GKs be exempted while their armies aren't.

This rules won't be implemented officially anyway, so why think about other players? Any reasonable player in club will agree with this rules though, as everybody know current situation of GK. Our psychic powers is not that strong, spamming them without handicaps won't break the game. We simply cannot field enough units to spam them.

I think the idea is to give GKs something that makes them truly unique from other Astartes, as well as buff them sufficiently so they can compete relatively evenly with all the other factions in the game.

Kind of like how Genestealer Cults have a totally unique mechanic in the gang that sets them apart not just from other Tyranid allies, but all other factions, it would be great if GKs had a set of rules that truly made them more than just "silver Marines with storm bolters and Psychic Powers on every unit."

Personally, adding nothing else, I think the following could bring GKs in line with these two criteria (i.e. unique among Astartes and competitive on the Tabletop):

1 - Chapter Tactics Equivalent (i.e. GKs get this no matter what) -- +1 to Deny/Cast (Brotherhood of Psykers), Deep Strike Turn 1 (Deadly Assault), Re-roll all to Wound rolls against Daemon units (Daemon Hunters), same rules as other Space Marines (Angels of Death)

2 - Combat Doctrines Equivalent (i.e. GKs get this if your entire army is made up of only Adeptus Astartes models) -- GKs have -1 to Hit them for unit shooting outside 12" (The Shrouding) and a 4+++ against Mortal Wounds (The Aegis)

3 - Unique Doctrine Equivalent (i.e. GKs get this if your entire army is made up of only Grey Knights models) -- Can use all Psychic Powers multiple times a turn, but each subsequent casting of the same power requires +1 to the casting roll to successfully manifest (Psychic Supremacy)

I just noticed the rule for the Invictor Tactical Warsuit's heavy bolter sidearm:

It's essentially the same rule we put forward for our wrist-mounted Stormbolters just over 3 months ago! If GW thinks its okay to shoot a Heavy bolter right in your opponent's face during combat...there would hardly be any issue for our Stormbolters to do the same.

This along with the C:SM's ability to deeptrike turn 1 again...these new rules are teetering around very GK applicable territory! Refining our rules here doesn't necessarily mean they'll be pure flights of fantasy - as GW is now showing precedence with these new upcoming rules....

Very true, especially with the fact that it is a "Heavy" bolter, Storm bolters were designed for this sort of stuff,close combat. Were Heavy bolters? No, they were designed for support. So they are going to have to update the Storm Bolters otherwise it's going to raise either a lot of complaints or difficulties in-game.