45 replies to this topic

Hello.
I’ve decided to start a Chaos force.
I really like the black and gold colour scheme for Black Legion so want to use them as the basis for an army (plus Abaddon is badass!)

I’ve bought a squad of Havocs and a unit of Chaos Space Marines to start with.

Now, I intend on running 2 units of Havocs. One with 4 Lascannons and one with 2 Reaper Chain Cannon and 2 Heavy bolters. Is that a good idea? Or would the heavy weapons be better included with the Marines squads?
Also how should I arm the Sergeants?

All help would be great as I’d like to crack on with building and painting them up!
Nothing like a new project.

most will probably say to run the Chaincannons in your CSM squads, leave the Havocs for the heavier weapons.

I'm planning to do a squad with Lascannons and another with 2 Autocannons and 2 Missile Launchers.

I'll probably either leave the Champion plain, or give him a Plasma Gun so he can have some range.

I like the 2 las, 1 ML and 1 AC for two havoc units and replaced my all HB unit with 4 AC as they are pretty decent. 2 chain cannons in CSM squads are a great place for them. You don't have wound soak for 4 LC for CSM anymore, better to split them up IMO if you are only taking 4 LC and multiple havoc units.

Are there any websites or anything where you can buy additional Chain cannons? On paper they seem pretty potent.

Another question, is it better to run Marine in squads in 5’s or 10’s?

I used assault cannon barrells and the tops of dreadnaught exhausts to convert my heavy bolters into chaincannons, but there are plenty of places out there where you can buy chaincannon bits or 3rd party substitues.

I used mk III tacticals with the FW rotor cannons as chain cannons. Actually works out cheaper than chasing the actual havoc ones. They are definitely too small for the new CSM sculpts though. Remember that new havocs are on 40 mm bases if you use older sculpts with the FW rotors as havocs.

Five Marine squads are decent, especially as BL as they'll be wiped before they run, but you'll still want the same sort of number of Marines i.e. more squads. I'll be going for the FW Rotor Cannons should I get round to them also (makes a lot of sense)

When do we get to see some pictures?

Thanks gents! That’s a great help.
I think I’ll run them in 6s with a heavy weapon from the Havocs set (they just look so chunky and cool!)

I think I’ll run them in 6s with a heavy weapon from the Havocs set (they just look so chunky and cool!)

I am planning on including elements from all the Gods!

I went with a darker brassy gold (I'm building my boy an Ultramarines force and didn't want them to look too alike!)

With that in mind I've included a green as a spot colour to mix up the colours a bit. Also a nod to the Sons of Horus.

My gaming board has a grey sheet over it so I've gone with a city fight basing scheme. 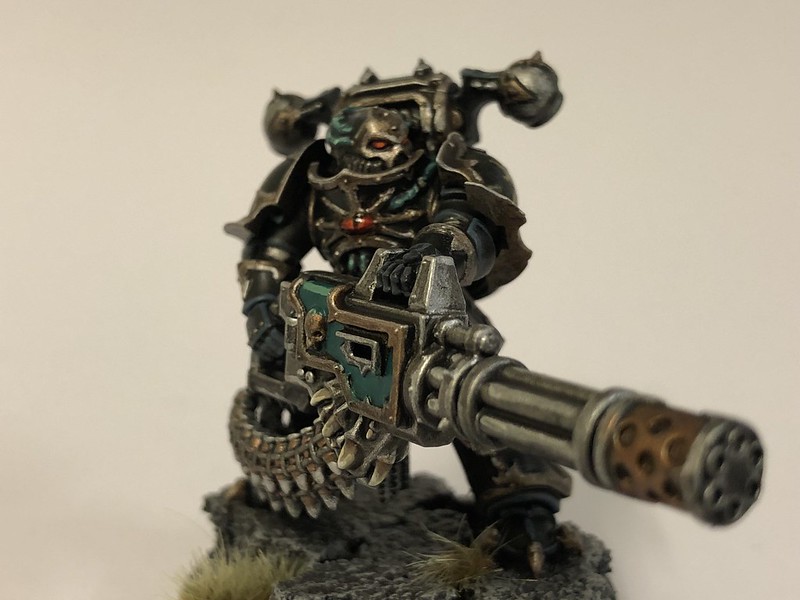 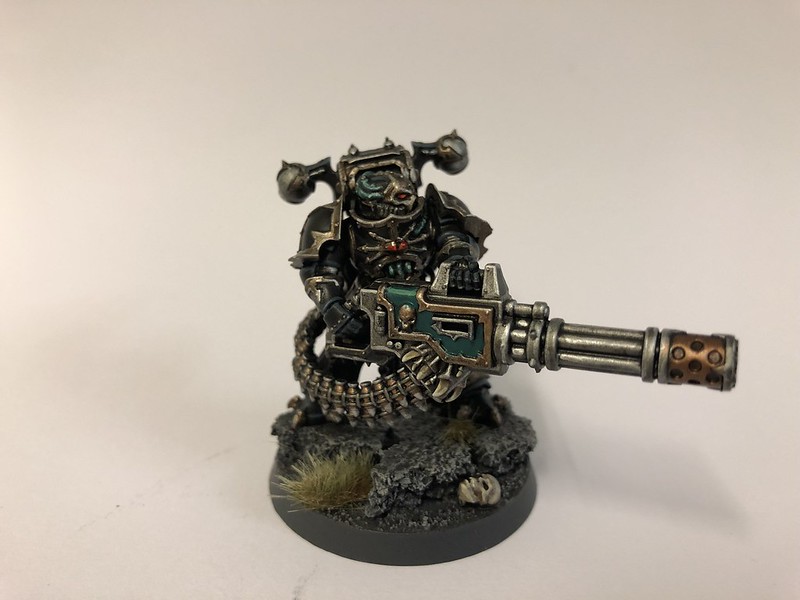 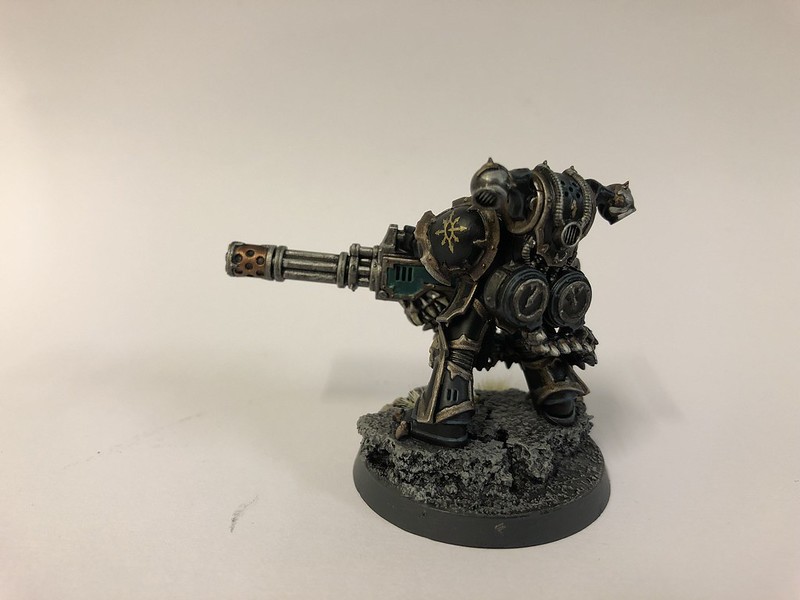 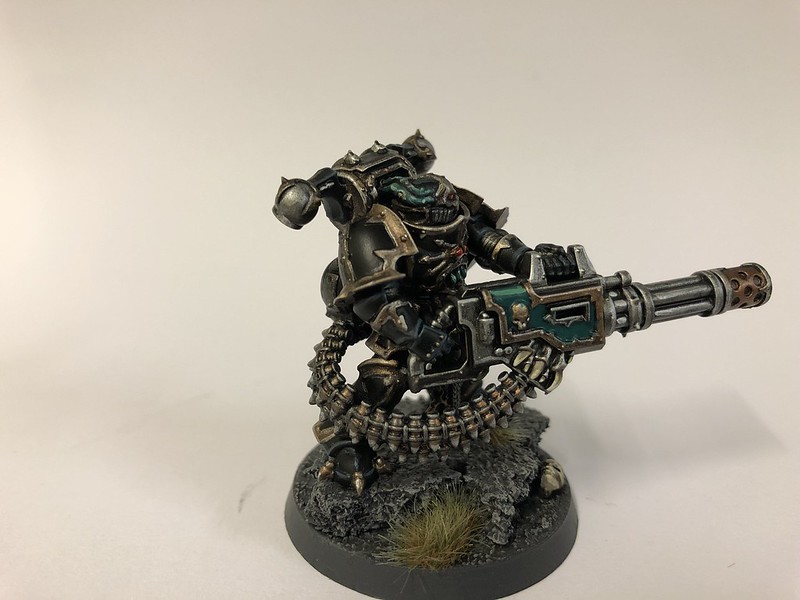 I had a lot of trouble with the ammo feed, hopefully it doesn't look too bad!

Looks fantastic! Yea those ammo feeds are incredibly finicky. I try not to glue the arms on prior to painting and it just makes it worse lining everything up afterwards.

The green looks really good on the weapon, however im not sure how pleased Abbadon would be with you paying homage to the legion he has put in such an effort to distance his followers from

Colours are great, I also like the green works very neatly and adds some colour

This is great, solid start. You could paint every third bullet tip a diffrent colour on the ammo belt to represent tracer rounds, would also add a bit more splash colour to the model.

This is great, solid start. You could paint every third bullet tip a diffrent colour on the ammo belt to represent tracer rounds, would also add a bit more splash colour to the model.

I paint all my bolter round tips red, which does add some nice spot colour but can, admittedly, come across as kind of cartoony.  Going every 3rd or 5th round might limit that cartoonyness, or adding more variation to the colour (I've been painting mine red without any shading or highlighting - adding a black wash or a colour blend might have worked better).

Anyway, certainly worth a try.

I would also do the circle at the end of the bullet casing the some brass as the rest of the casings, as it would almost certainly be part of the casing.

Thanks very much for the interest!

Prot, I can’t imagine building it after painting! I’m all thumbs at the best of times!

I am forsaken, lol! I hadn’t realised that was a thing!

WarriorFish, cheers, I tried it all black and red and felt it was too red. Glad you like.

MegaVolt87, great idea. I think every third round could work....

Dr_Ruminahui, you’re right, that would be more realistic.

Thanks everyone for the constructive feedback, I’ll use it moving forward!

Next up will be a Lascannon and Champion. (I paint one model at a time)

Do you guys think Plasmagun and powermaul for the Champion?

Even as a person who isn’t massively fond of the black legion, since they suffer from my general dislike of poster boys, I have to say the colour scheme you’ve gone for looks great. The sons of Horus style green on the weapon gives a nice element to it. Be interested to see how the rest of your force turns out.

From what I’ve heard around the place plasma gun seems to be generally favoured for it but in terms of melee choice I’m unsure.

Chaos in all its forms: http://www.bolterand...aos-collective/

You won't get much use from a melee weapon on a havoc champ as you will be shooting. Maybe a plasma gun, although combi bolter is a good choice. Nothing wrong with just a normal bolter to save points for elsewhere.

For a long range havoc squad, my opinion is that you are best not giving the champ anything more than a bolter or combibolter, as he's the only bullet catcher the squad has before you have to start removing heavy weapons.

This reasoning is weaker for a close ranged squad, as a close ranged squad is likely only to get one round of shooting in before being wiped out, so you might as well make it as powerful as possible.  Most 40K shooting is within 24", where the enemy will be in a much better position to shoot the squad until it is dead compared to a long range squad which is more likely to attract fire less fire and therefore could benefit from having a model to remove before the heavy weapons.

That said, the argument for the plain champion in a close ranged havoc squad is stronger if you intend to hide it in a vehicle in order to weather 1st turn shooting - when the vehicle is destroyed, statistically you are pretty likely to lose 1 model from that, which again makes it useful to kill a cheap champion rather than an expensive heavy weapon.

As with MegaVolt87, I wouldn't put a melee weapon on a havoc champion.

And they do pretty good mini guns too

Don’t know if it’s been said already but the Taurox kit has a dual Gatling bit. Makes a great chain cannon for two marines. A repulsor also has a pintle chain cannon barrel bit that’s even bigger.

Edit: spelling, because of course

Thanks very much gents.

I went with the Plasmagun and Chainsword in the end.

Made some progress over the weekend.
Got 2 more models done. 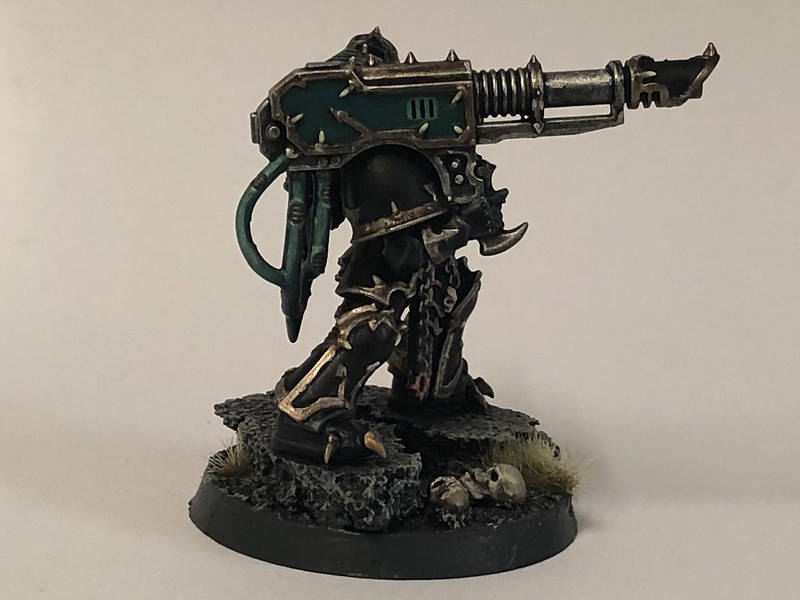 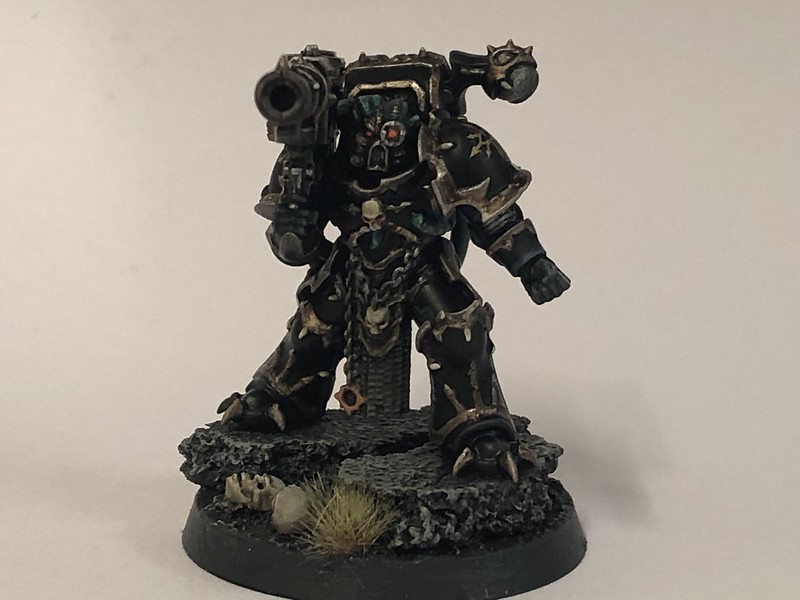 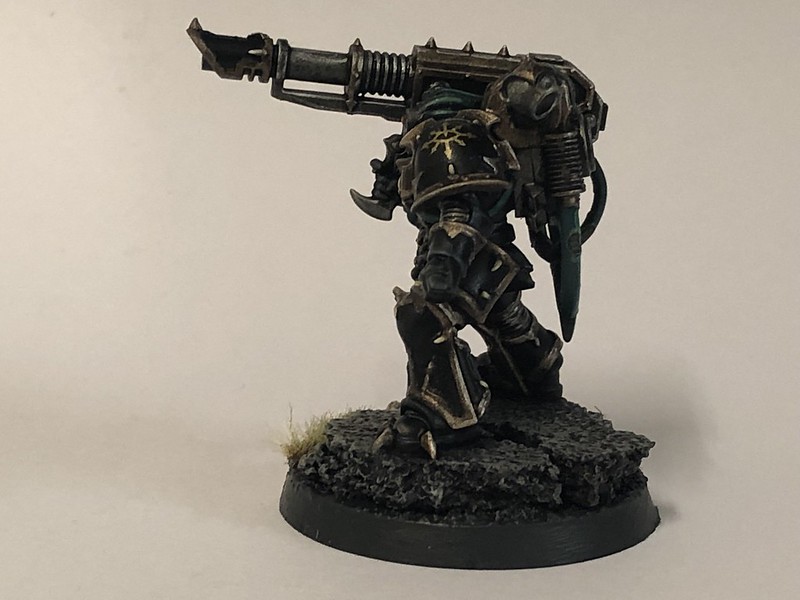 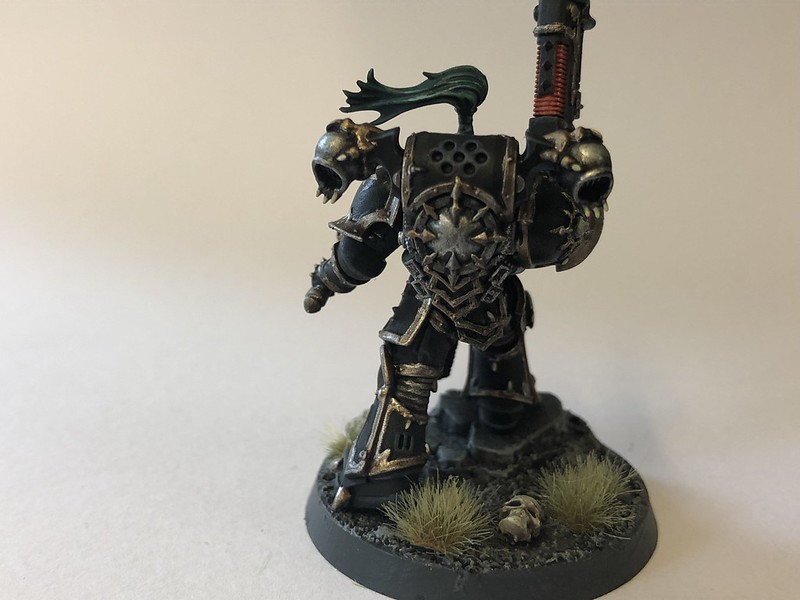 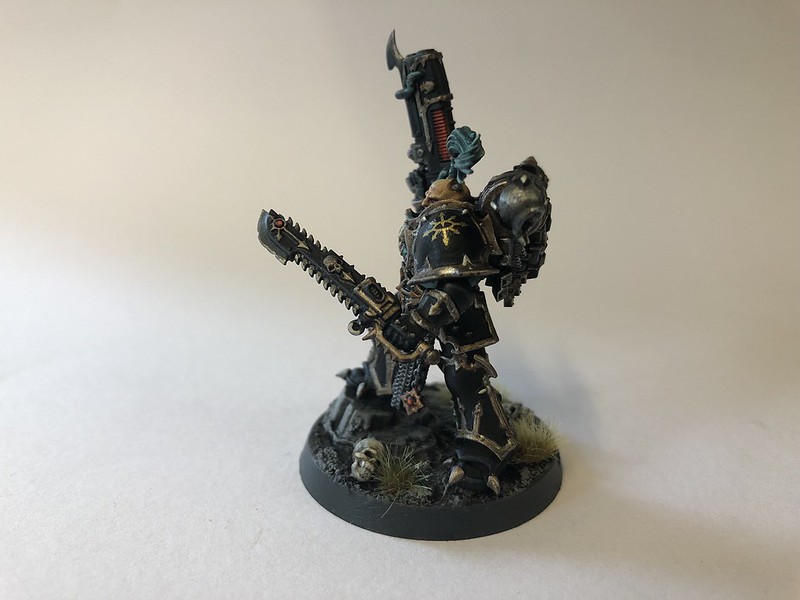 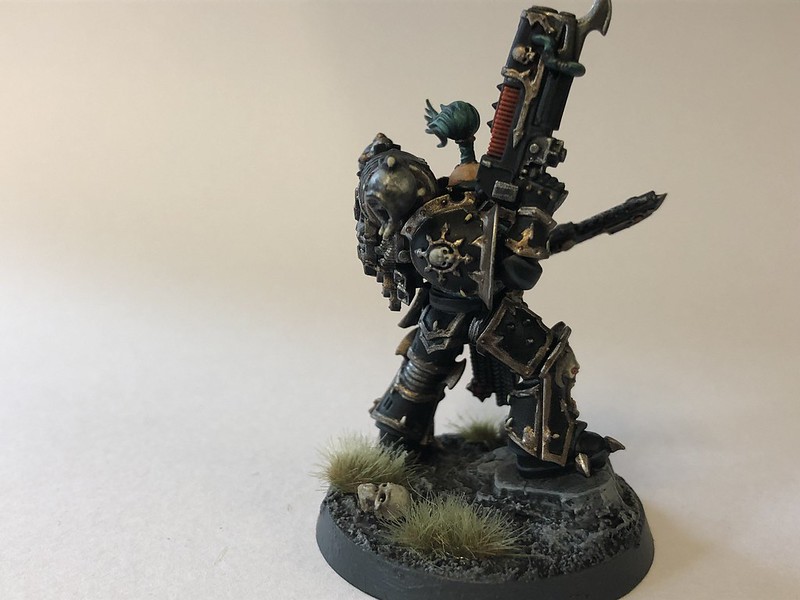 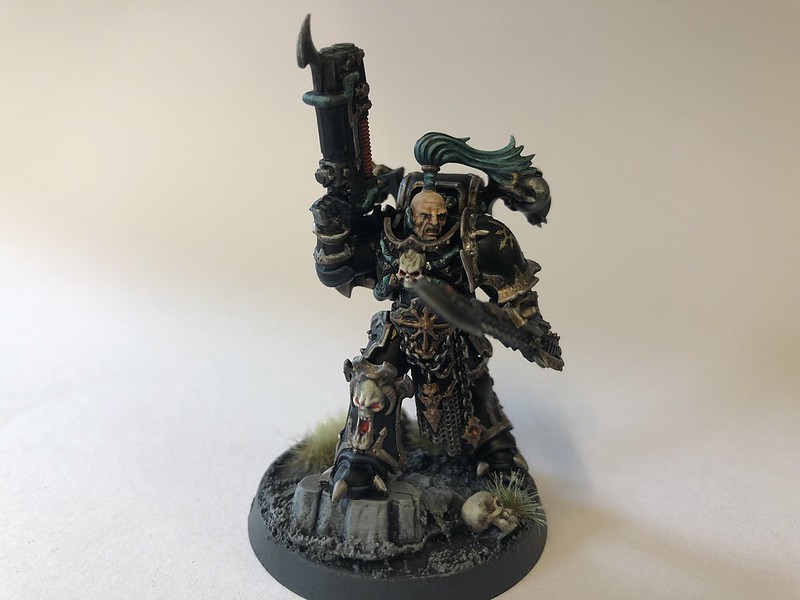 Next up will be another Lascannon, I'm thinking I'll be running 2 squads of Havocs. One with Lascannons and one with Missile Launchers.

What are your thoughts? Should I field them this way? Or should I split them into 2 Missile Launchers and 2 Lascannons per squad?

As far as fielding them the beauty of 8th ed is the ability to split fire. I started new havocs using all lascannons, and sometimes all Missiles. Eventually I broke them into pairs of each for added flexibility and you know at the beginning of a game which ones you get more use out of. So in those cases you take casualties on the ones you know you won't value as much.

Nice work, agreed on the bases they are nice and simple but bring out the model's details

Can't wait to see a squad together

Split fire means squad load outs isn't such a question any more, I'd also split them up. Gives you more reach with the weapon types and makes it less easy for your opponent to immediately focus fire on the lascannon squad - so pretty much all positives

Excellent work on the Black Legionnaires.

Reasons to use the Steel Crusaders ('Codex: Space Marines' supplement) or the Iron-hearted Angels ('Codex: Blood Angels' supplement): Because you think giving Sternguard Veterans a heavy bolter wtih special issue HEAVY BOLTER ammunition is ALMOST as much fun as shoehorning an Earthshaker cannon into a Land Raider.
Back to x BLACK LEGION x