Tutorial for my Necromunda Bases

Here's a little tutorial on how I did my Necromunda bases. The idea I had in my head for the bases was that the gang is exploring an industrial area that had previously been flooded and rust got everywhere. 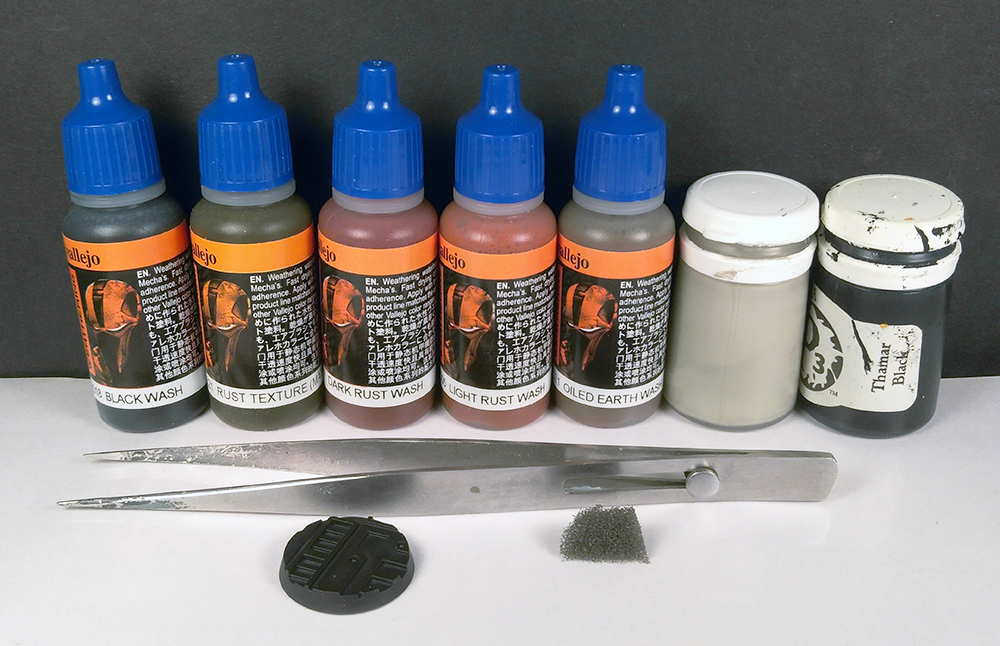 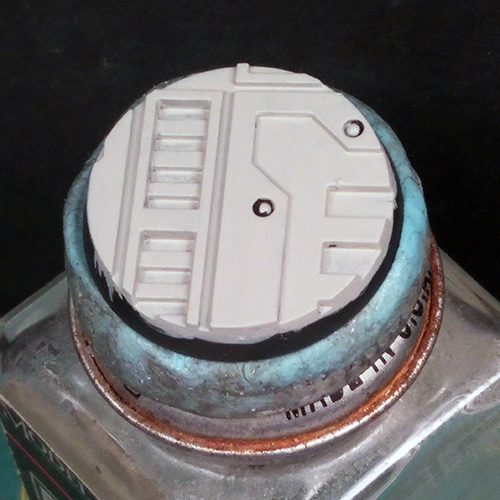 Since this will be heavily weathered the coverage doesn't have to be perfect, especially in the lower recesses.

Hold the sponge in the tweezers, dip it into some paint straight from the jar, and similar to drybrushing you will dab off most of it on a paper towel until it barely leaves any marks. I will usually test it on a fingernail at that point to see if it's good or if I need to add or remove more paint from the sponge. 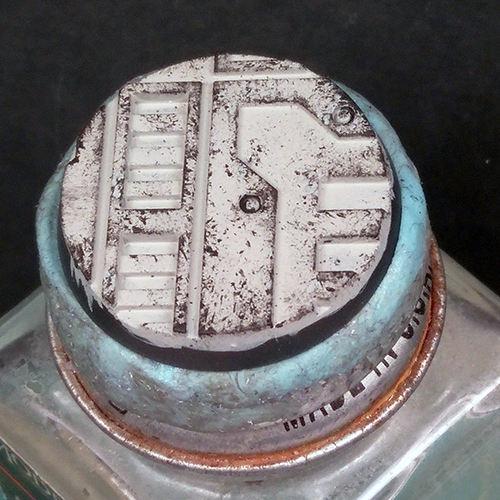 When it comes to any weathering, you need to think logically about where it would happen on the vehicle, figure base etc, but it's most important with paint chipping. I've see a lot of paint chipping out there on anything from scale tanks and other AFVs to sci-fi and fantasy models, and when there's a ton of chipping in a place that it wouldn't normally be it instantly breaks the illusion for me. On these bases specifically, the edges of the highest raised sections are where you want to focus, with corners being a prime target for a little heavier action with the sponge.

If you happen to overdo it in a particular area, you can use a fine tipped brush or another piece of sponge with the base color to take some of the chips away.

I mix Rust Texture and Oiled Earth about 2:1 to loosen up the Rust Texture a bit and get it to spread easier and then paint it into the lowest recesses where all the dirt and grime would accumulate the most. If you get a little outside the lines, don't worry about it too much. 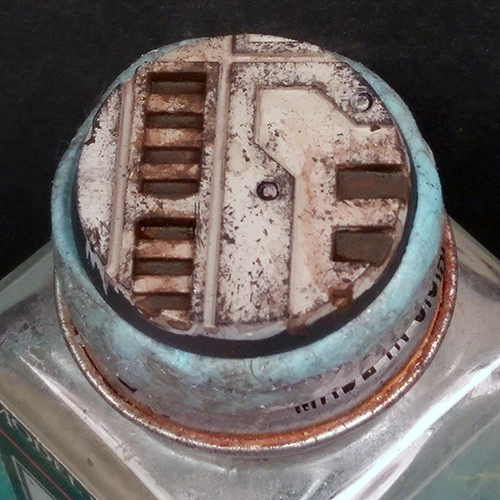 Now I take the Light Rust and thin it down a bit and begin to use my two-brush method with these washes; a smaller brush loaded with the wash and a larger brush that's clean and slightly damp. These Mecha washes are more forgiving than any other acrylic washes I've ever used, meaning you have a couple of seconds of working time after you lay down the wash with the first brush and then you quickly swap to the clean one to move it around where you want or to clean up any mistakes. 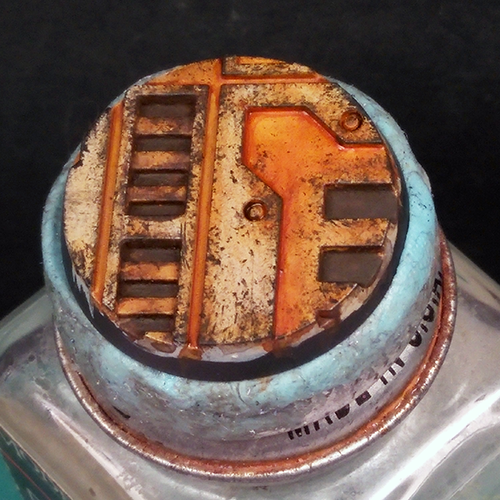 With these 'Munda bases, there's 3 layers of height to them and I mostly concentrate on the second layer, painting the wash into the corners and along edges where it would accumulate. For the top layer, I apply some wash across the area and then immediately wipe my thumb across it to remove most of the wash but leaving some streaks behind creating an effect that I haven't been able to duplicate with a brush. For the low spots that almost look like ladder rungs, I do the same thing but use the damp brush to remove small sections of the wash. Any depressions or holes, like these that appear to have bolts or something in them, get some love too.

Now I switch to the Dark Rust and mostly just repeat what I did in the previous step, again, concentrating on corners and along edges. 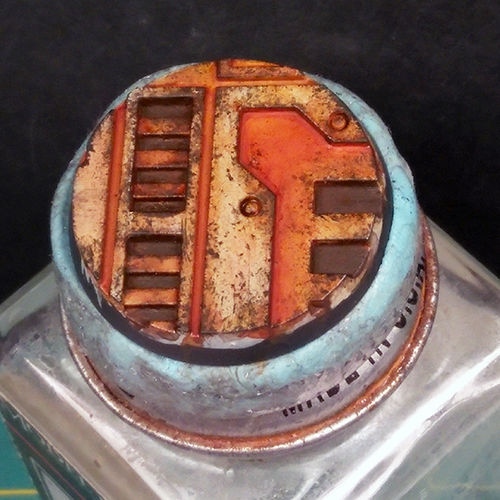 Now I mix Dark Rust and Oiled Earth 1:1 and add some matte varnish (or mixing medium - something to break the surface tension) so it doesn't stick to the walls and corners and begin using the tip of the brush to place little blotches of wash in various areas with the intention of creating darker spots and some harder edges almost like tide marks. 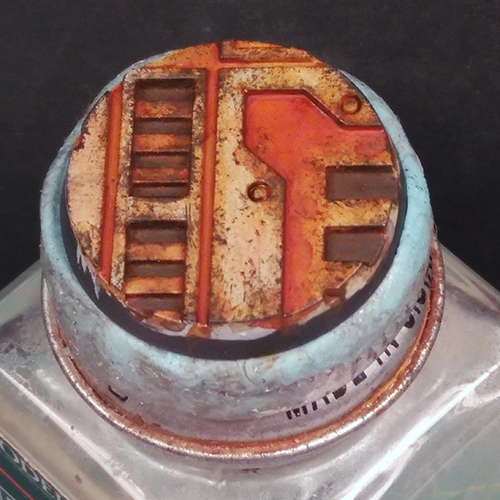 Now I mix Dark Rust with the Black Wash 3:1 and some matte varnish and repeat the previous step of using the tip of the brush to add little points of visual interest. 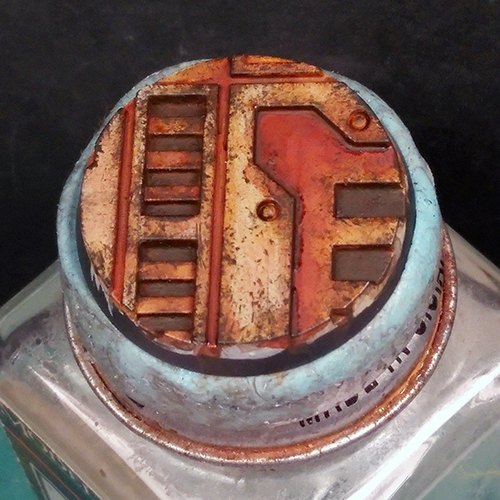 When I was done with that, I added a little more black to what was left of the wash mix and hit a few corners and edges harder than I had previously to add more contrast.

And you're done! Clean up the outside of the base with black or whatever color you might paint the base sides with and you're ready to mount a figure on top.

Thanks for taking the time to put this together.

Thanks. I wished I could have done a video tutorial, but I don't have access to the Adobe video editing software anymore. I tried using a free one, and it was nightmarish in comparison.

Also tagged with one or more of these keywords: Tutorial, Necromunda, Bases, Washes, Chipping