'The Sun Reveals Your Sins': Order of Solar Ascendant


+ Disposition +
Established during the Fourth Scallop Star Purges (M37.778–789), the Order venerates the Crone of Iocaste, an historical figure whose tale became conflated with a number of local folkloric sources. The Crone herself, Badam Kaur, was an eyeless and earless mutant; who nevertheless came to lead a minor Imperial Crusade against the forces of the Archenemy. Beatified in M39, the historical Crone – a divisive and thoroughly fascinating mass of contradictions – has become lost in the shifting sands of Imperial records; and is now venerated simply as Saint Iocanthe, a flawlessly beautiful and scrupulously virtuous being who was martyred during the end of the Hesiod Romantic Rebellion. 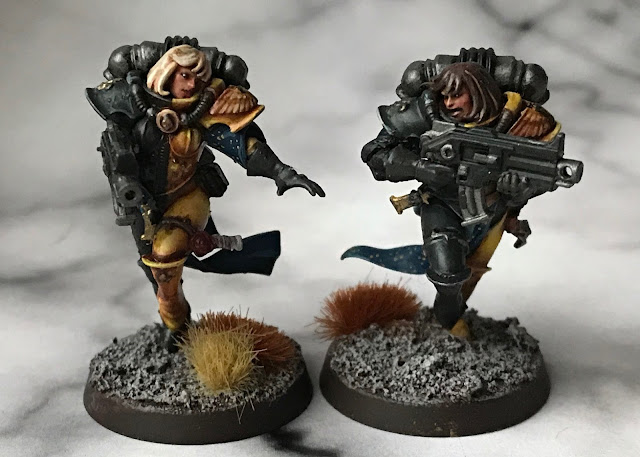 The Order maintains a number of Missions, both in Antona Australis itself and the neighbouring Prodigium Os Sector, but its largest grouping is the Commandery based in the Sarum system. 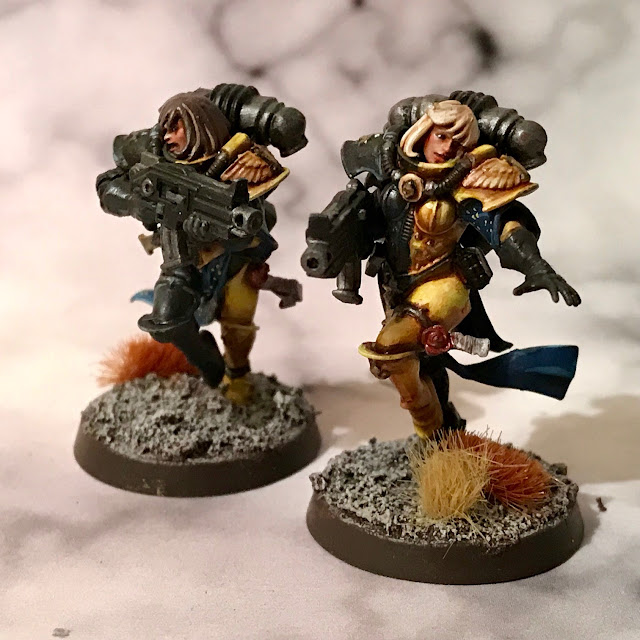 + Tinctures and Seals +
The Order of Solar Ascendant clad their followers in a split scheme; half their armour black as night; the other half bathed in the light of Sol, which the Order venerates as a symbol of the God-Emperor's beneficence. Their surplice-cloaks are the blue of the night sky, marked with symbolic star-markings that denote the Emperor's watchful eye over all of his worlds.

As is perhaps inevitable, given the sheer size and exhausting weight of Imperial records, the Order's heraldry bears similarities to many other uniforms in Imperial records. This is far from exceptional. Of particular note, however, is the fact that the scheme is not merely similar, but identical to that of the short-lived Frateris Constantium – a formation that last operated in M35, during the Alien Wars of the Nova Terra Interregnum.

'The principal military force of the Nova Terran branch of the Adeptus Ministorum, the Frateris Constantium formed a mirror to the Nova Terran Army. Both were precociously well armed and equipped by their Adeptus backers, but where the NTA attracted the more puritanical, the Frateris Templar were swelled by those who sought ritual and reliability in a world of swiftly-changing fortunes. '

What significance this has – and if indeed this is naught but coincidence –has been the subject of Inquisitorial investigation by the aforementioned Unfortunus Veck during the Sun King of Cepheus affair. Records are currently cloistered for Scarlet-level Inquisitorial staff and above. 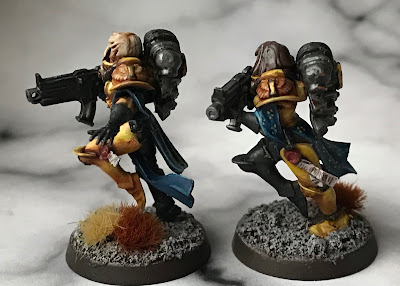 Sisters Callistus and Makemeet are typical Errant examples of the Order; trusted Battle Sisters that are deputised as bodyguards to important Ecclesiarchal representatives. They are tasked with ensuring the physical and spiritual safety of those under their aegis. Service as a Sororitas Errant-Solar is necessary to progress within the order; though outwardly seeking such promotion is regarded as sinful. An Ordinate of the Solar Ascendant must be nominated by her Superiors to such a task. 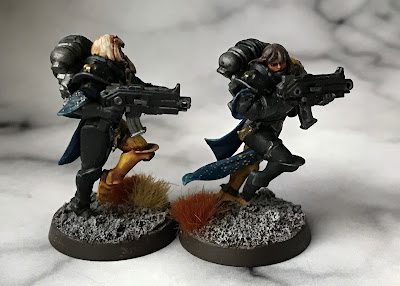 The symbol of the Order is a rising Solar disc, bathing the unworthy world in the light of the Emperor. This pict-capture shows the star-patterned cloaks well. 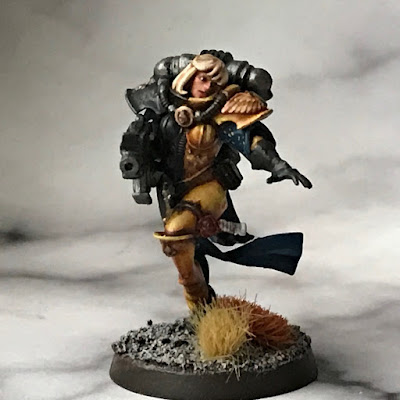 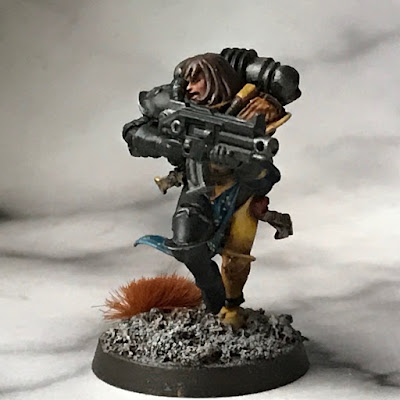 Ohhhhh this is gonna be good

I`ll be following this with interest good sir

Really liking the colour scheme, simultaneously striking and subdued, which help it feel right at home in the gritty setting.

You don't usually see Sisters in halved schemes but it looks great, black and yellow go very nicely together too

Then there's the conversion work put in, excellent stuff!

Also love the name and lore of the Order. The Errant concept is so cool- excellent setup for small scale stuff like BSF and Kill Team. Keep it coming!

I never seen a parted color scheme for sisters and it looks great! I also love your effort in writing their lore. And just to make you know: I'll copy your thread template!

Also tagged with one or more of these keywords: Sisters of Battle, Nova Terra Interregnum