Greetings Brothers, I thought I'd create a thread to keep my WIP and finished models in one place. I've been in the hobby for less then 2 years. I'm a slow painter so this is how my army looks like so far (not counting my Warcry Warband). The setting, novels and fluff is what I enjoy the most about the hobby, so it affects how much I paint/buy modelwise. Also my goal is not as much as to paint a lot of models, but to get better at painting.

I started with Kill Team beacause I don't enjoy playing with or against unpainted models. Kill Team was a good entry game because you need only a handfull of models. We played several very fun campaigns with my friend, and in those campaigns heroes were forged. More below.

I have my own 11's Company, because I wanted to create some of my own Characters, while also being able to play with named Blood Angels characters, who I love very much.

As of now I don't have a Captain for my 11's Company. I haven't found a suitable candidate yet, and I'm not really trying to create one on purpose. Time will show who deserves it.

Because of this I added Karlaen to my army. Since he is the Captain of the 1st Company, it wouldn't be weird for him to lead another Company. 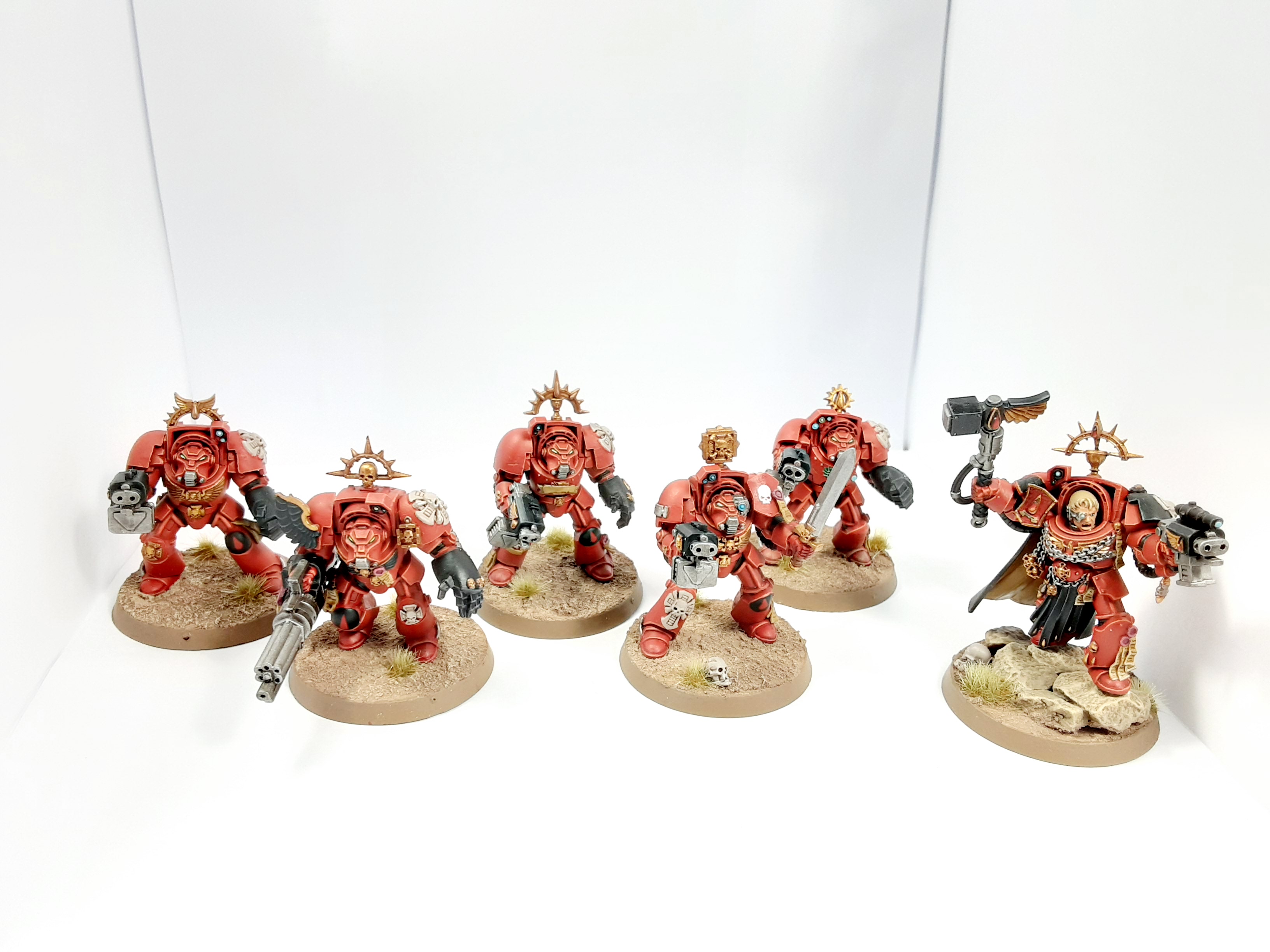 Sanguinary Priest Calisto took part in one of my Kill Team Campaigns. He kept many Brothers, including Brother Sergeant Gabriel, alive.

Chaplain Zaphen was assigned to a Kill Team. After Brother Sergeant fell to the Black Rage, Zaphen joined the squad to keep an eye on other Brothers and make sure that the mission is completed.

Lieutenant Emeric was part of a Kill Team sent by the Adeptus Mechanicus (as payment for repairs of Chapter vessel after it took a beating) to investigate a Vault found on a distant Planet near the Tau Empire border. Many foul xenos fell to his Encarmine Axe, which was granted to him by the Sanguinary Guard Order as a token of gratitude for his unshakeble will and combat prowess in a conflict that would have seen many Golden Brothers slain. 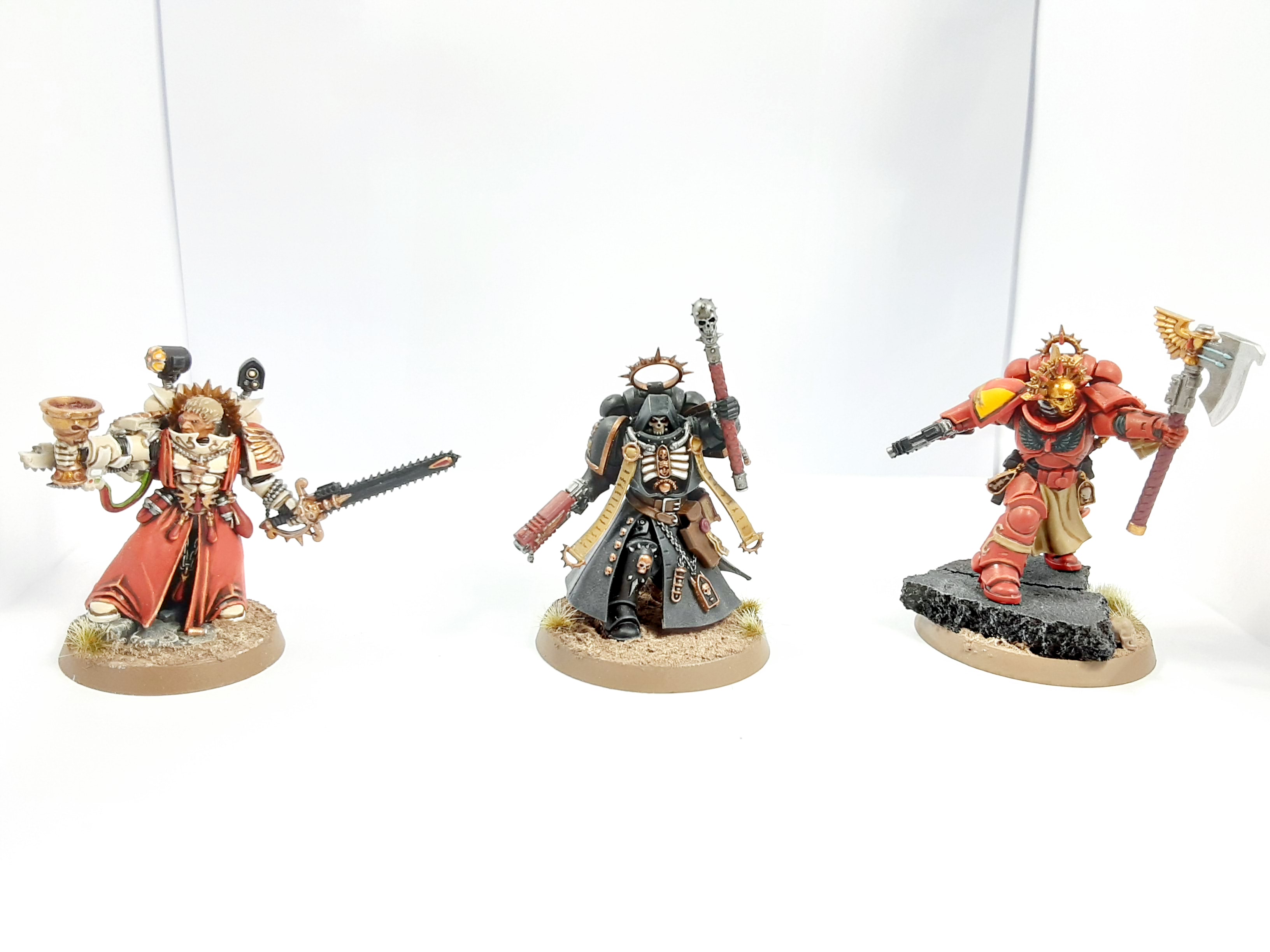 Brother Falkeon, whose name fits his falcon-like fighting style, took part in a Campaign against the Big Mek Zog Git. Swooping down into the heart of battle he delivered decisive kills taking key objectives from the enemy. 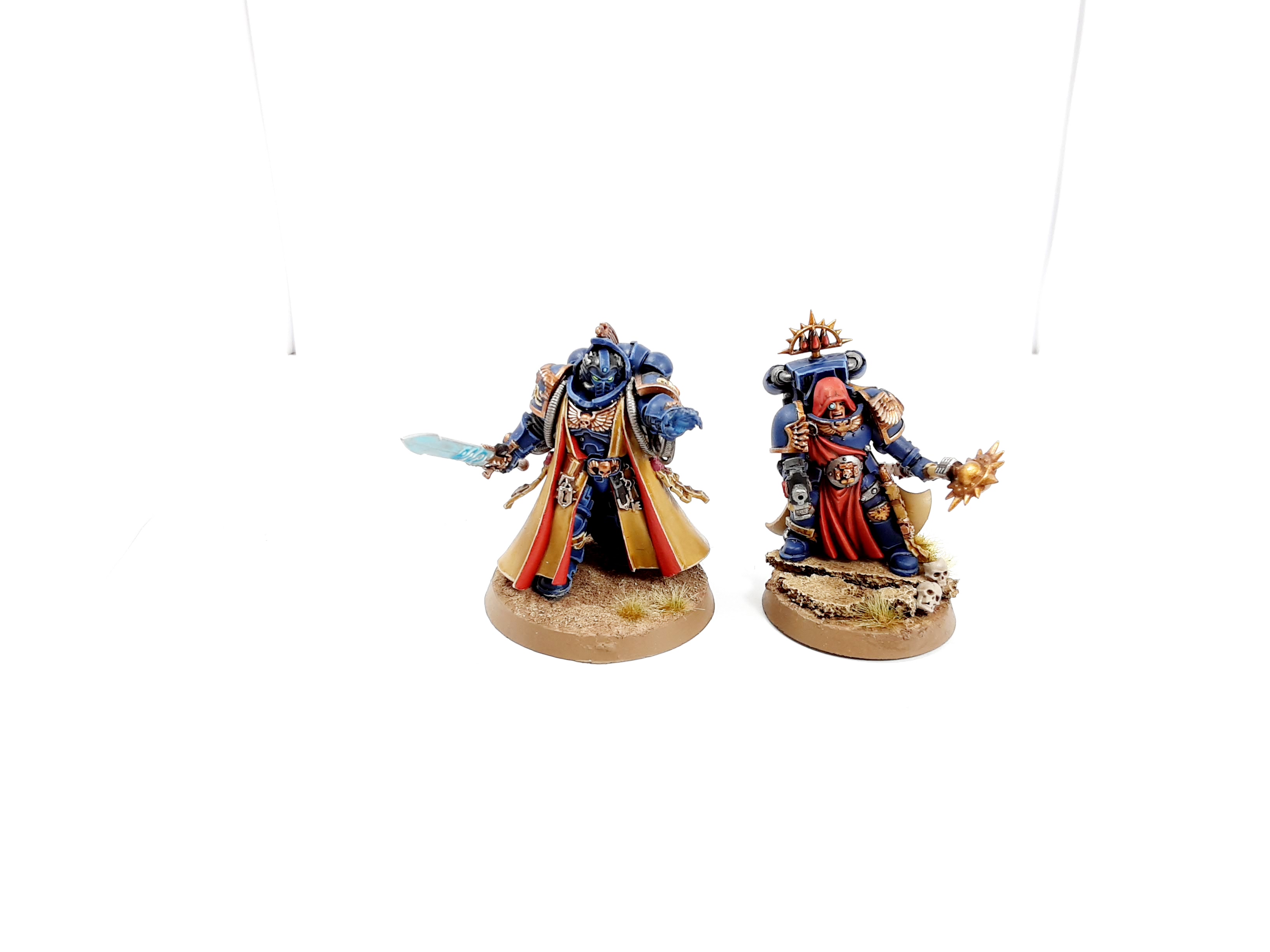 Some of the Sniper squad took part in the Campaign against the Tau. On'cleon and Vincent stood out amongst the others thanks to their true aim and clean kills. They are ready to cross the Rubicon Primaris and become Eliminators in the near future. 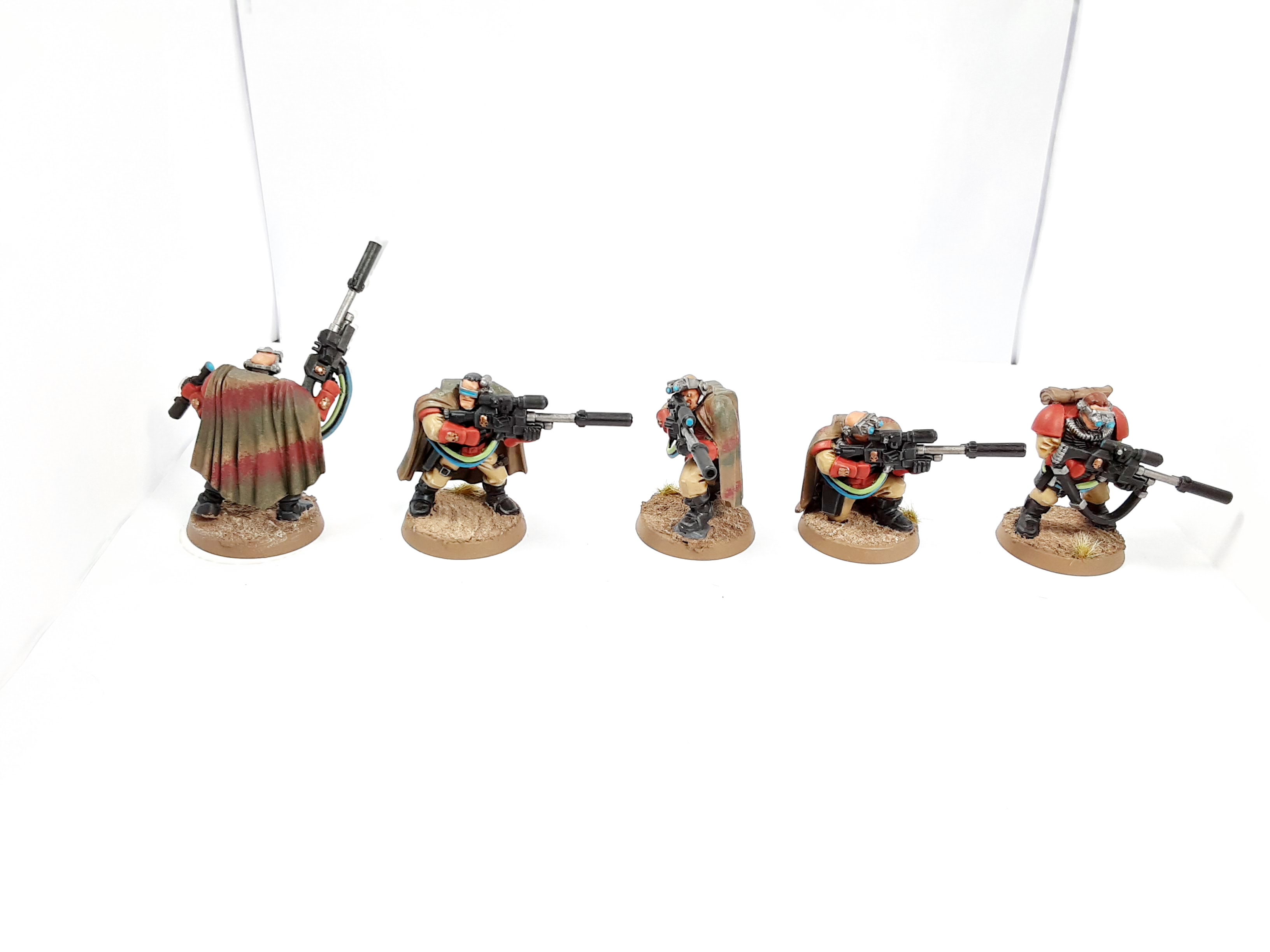 The Scout Squad were exceptional in several Campaigns and showed that they are not to be taken lightly. 'Maneater' Manfred, originaly a child from a tribe rumoured to be canibals, delivered death with his Heavy Bolter loaded with Hellfire Shells. 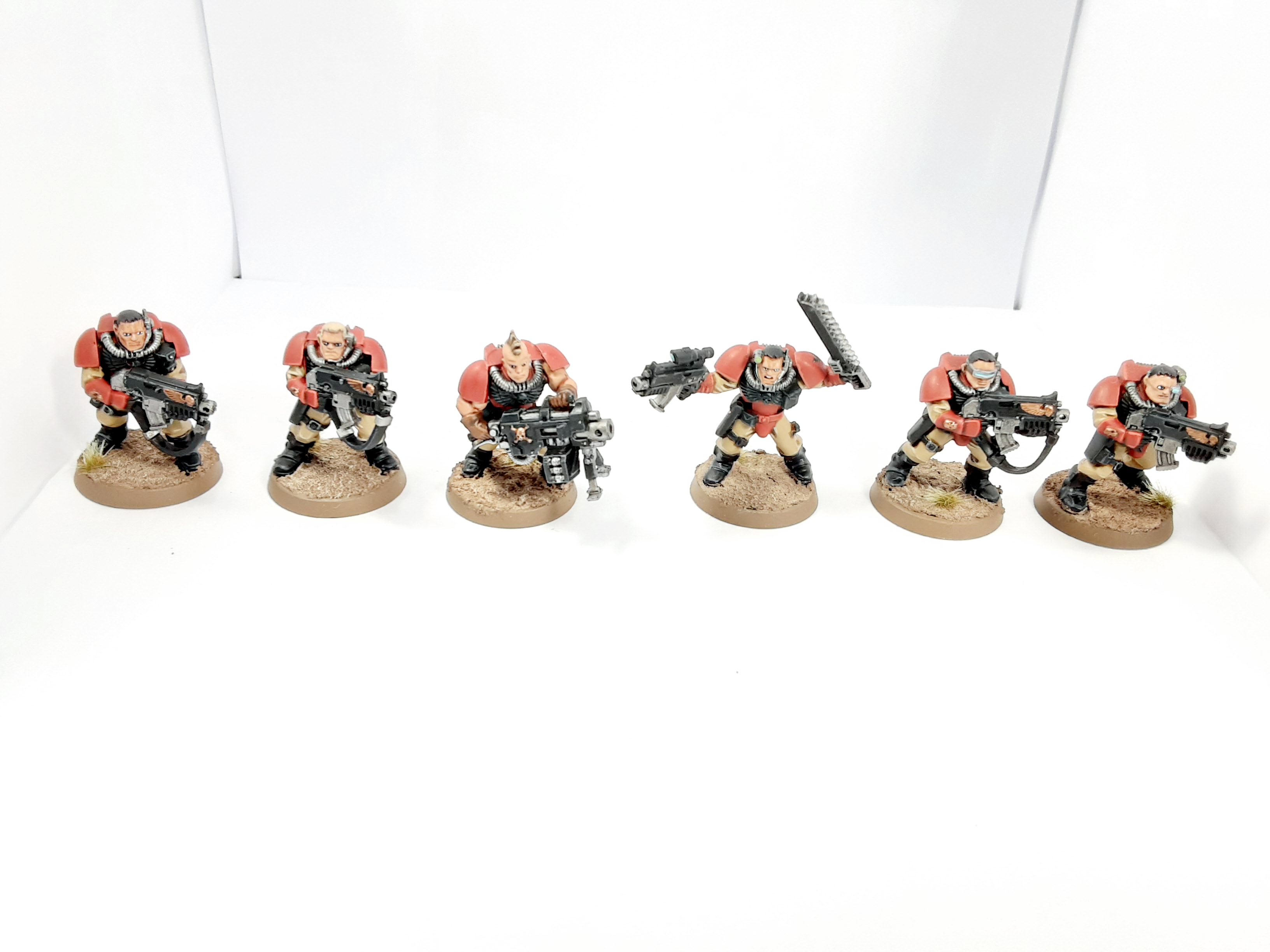 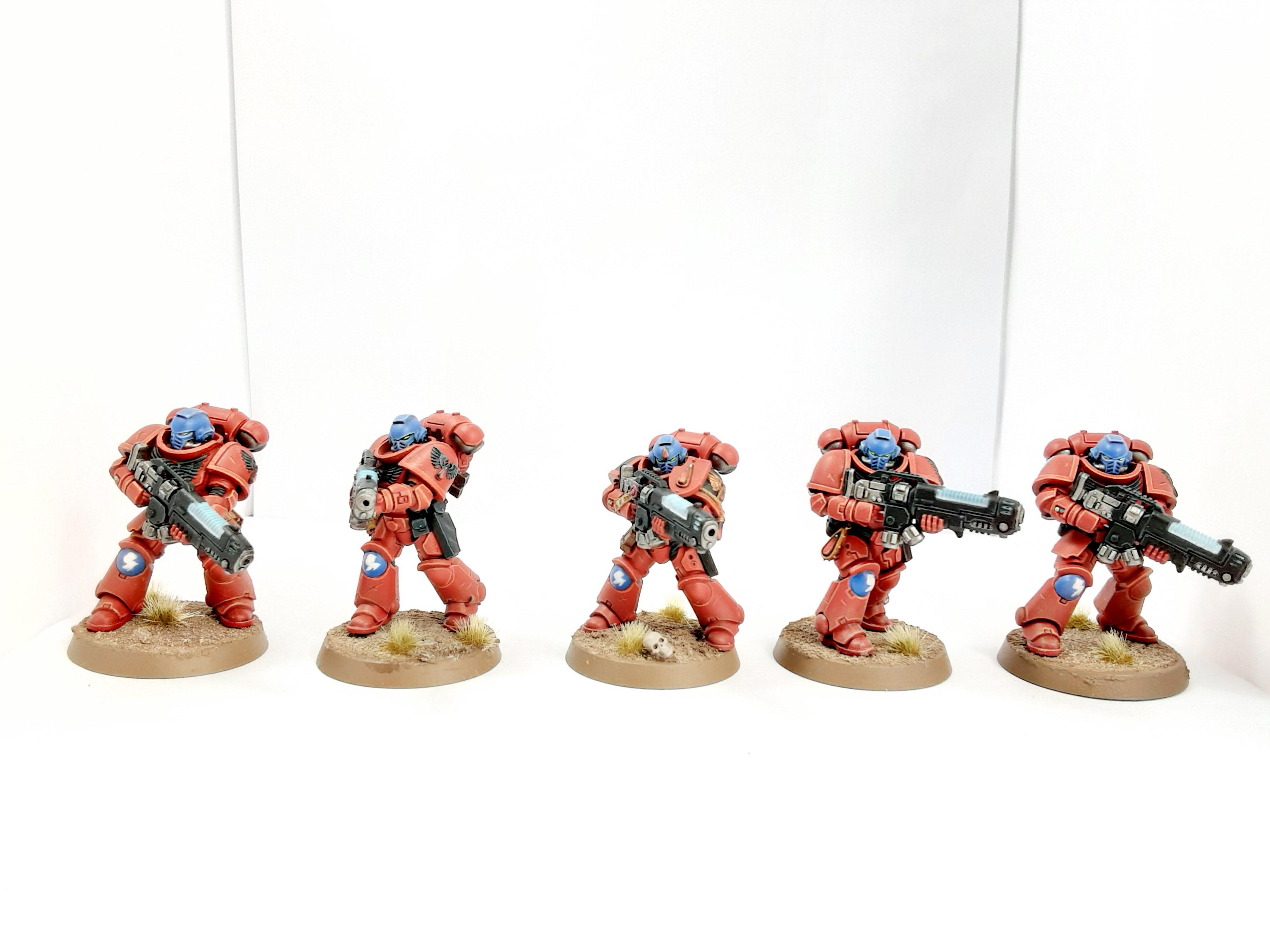 The heritage of Sanguinius 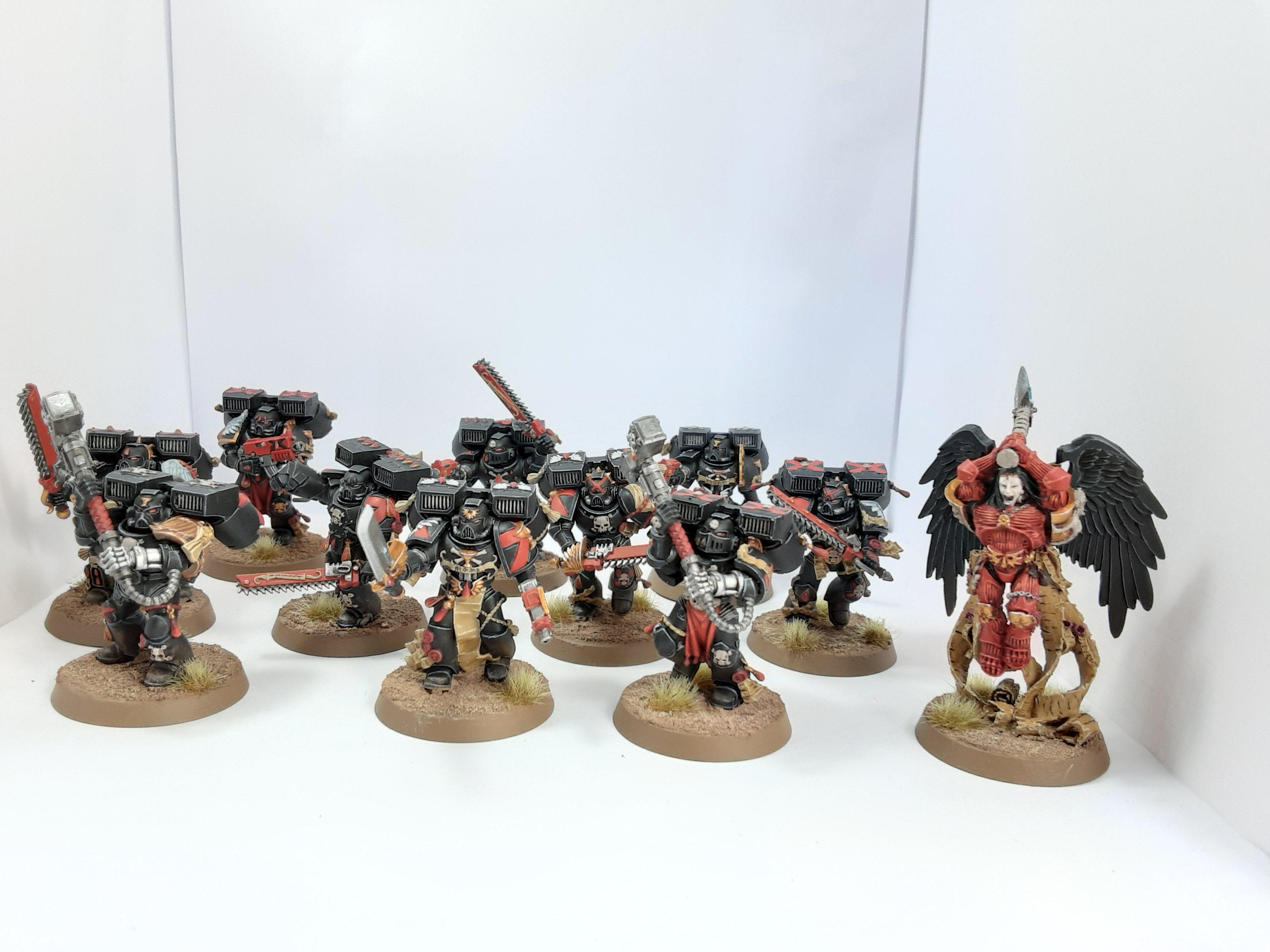 The most felixble of all units, the Tactical Squad took part in many Campaigns and were essential to all of them. Brother Sergeant Lucius, a skillful swordsman and stern Leader, shows great potential to become a Lieutenant or even Captain in the future.

Brother Sergeant Goro, whose tactical and flexible mind is just as dangerous to his enemies as his Power Fist, is a close second candidate for a promotion.

(This tactical Squad were my first ever bought and painted models. Some models have a darker red because I painted them differently back then. My current colour scheme is a bright red) 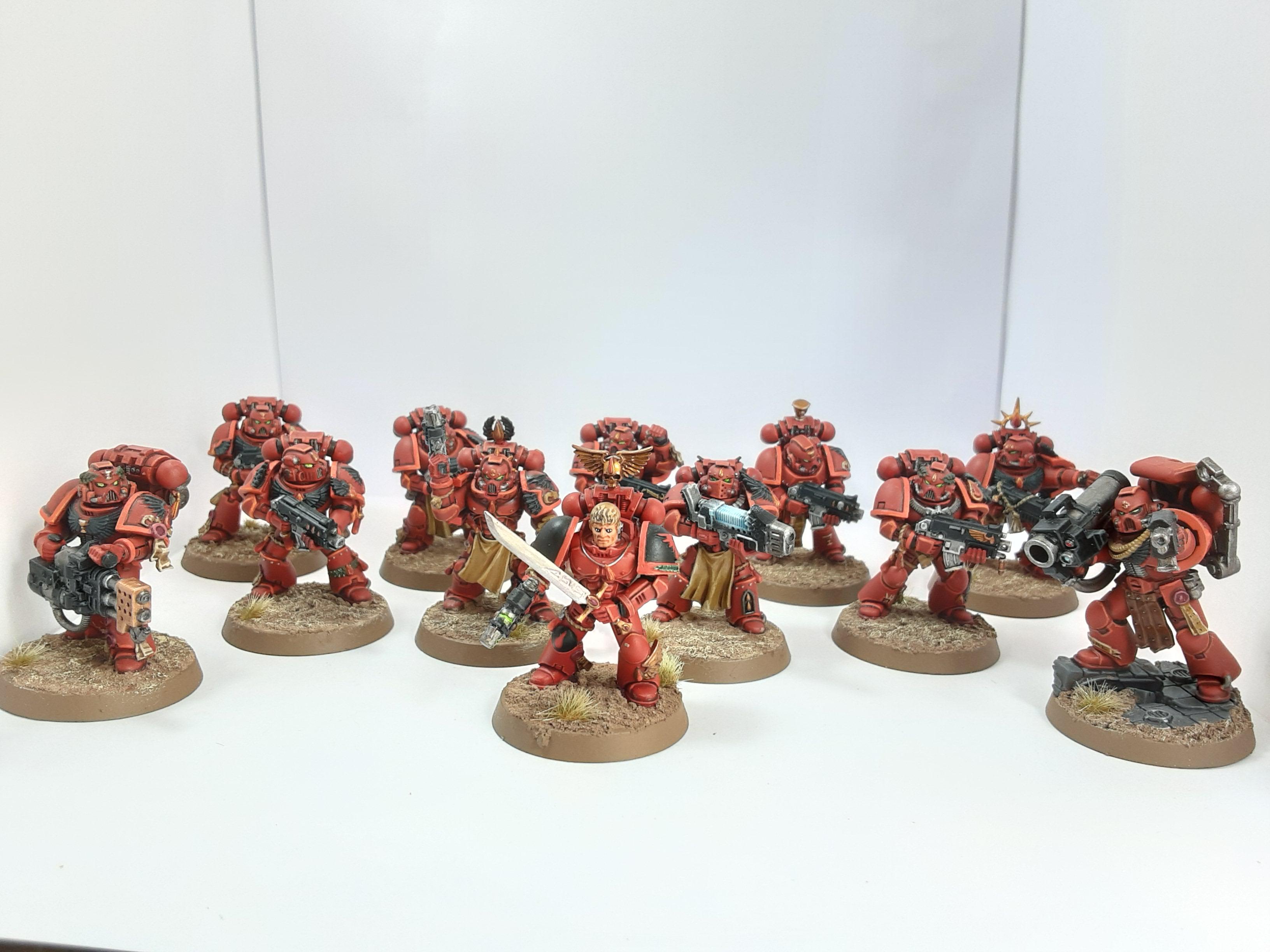 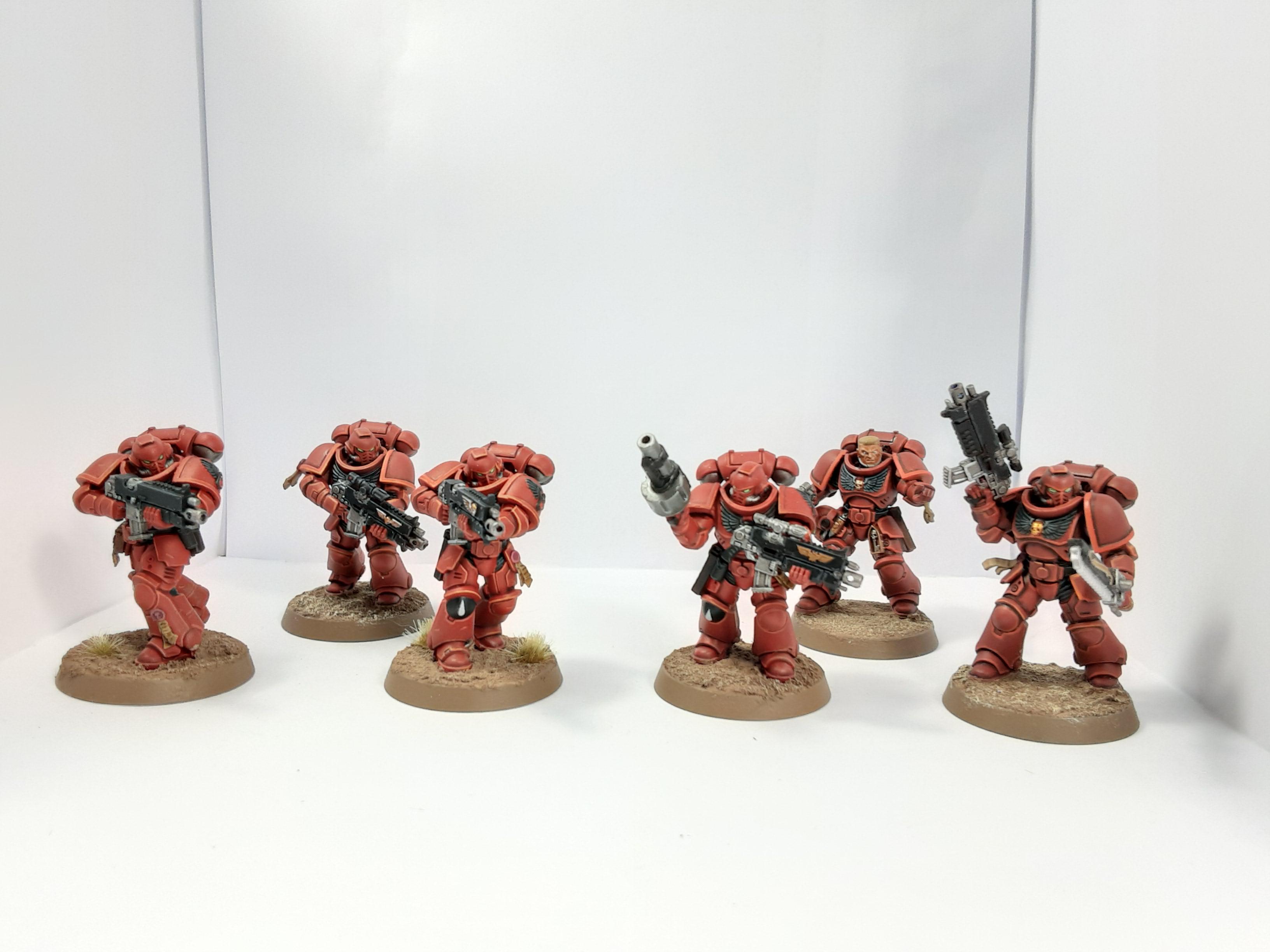 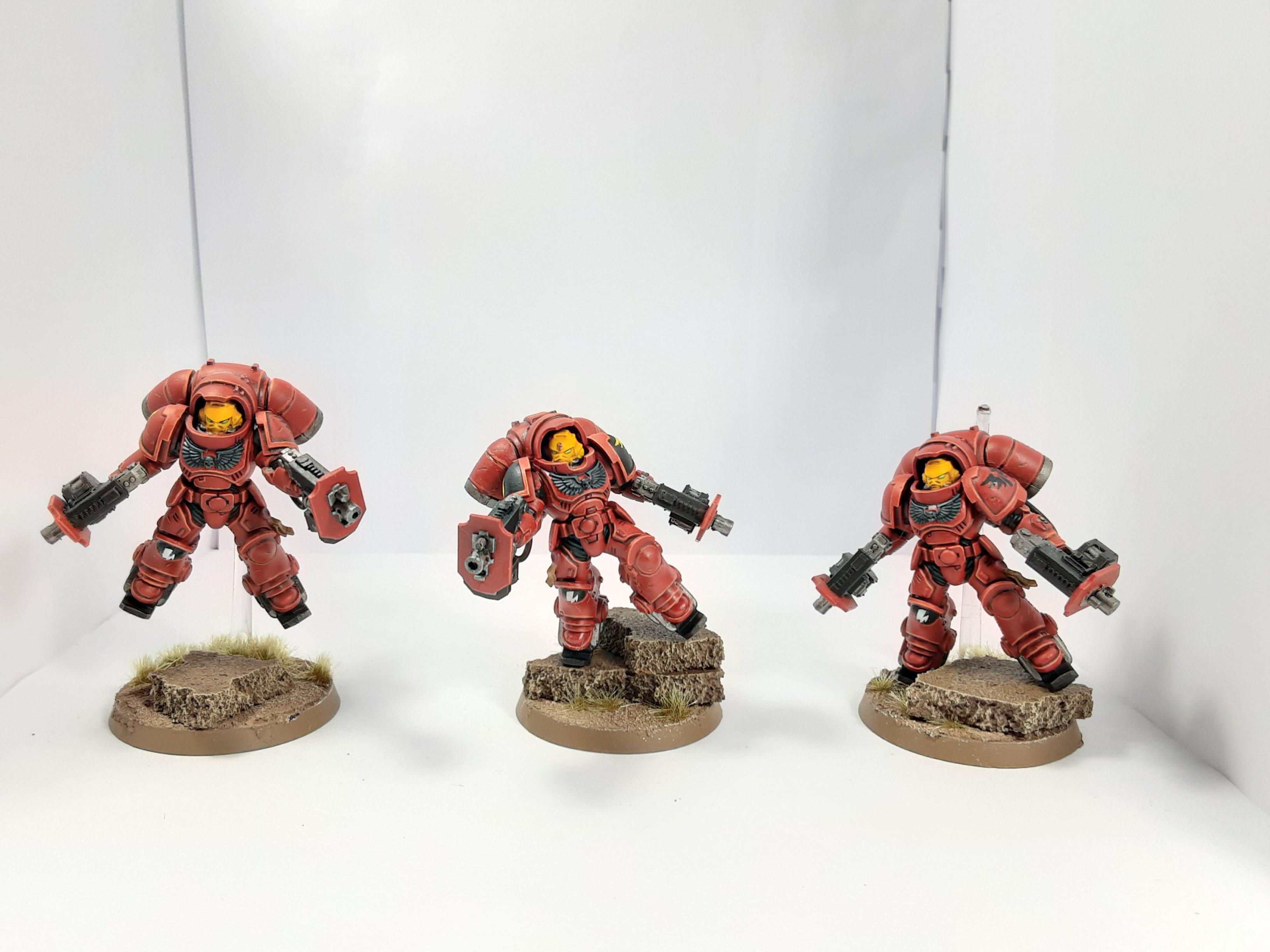 Brother Sergeant Gabriel was the Leader of our very first Kill Team Campaign. His Power Fist and Plasma Pistol delivered Emperor's Justice to the foul Death Guard, but most noticeably he JUST WOULDNT DIE. Alas in the second last mission he finally went down and suffered a horrible injury, meaning he couldn't take part in the very last mission. Though the last mission went very well under Lucius' command, Gabriel's wounds were to great for simple bionics. For his resilience, skill in combat and decades of flawless leadership, he wast granted the honour to keep fighting for The Emperor and Sanguinius, as a Redemptor Dreadnought. For Only In Death Does Duty End.

His chassis is equiped in accordance with his old weapons of choice: Plasma Pistol and Power Fist. 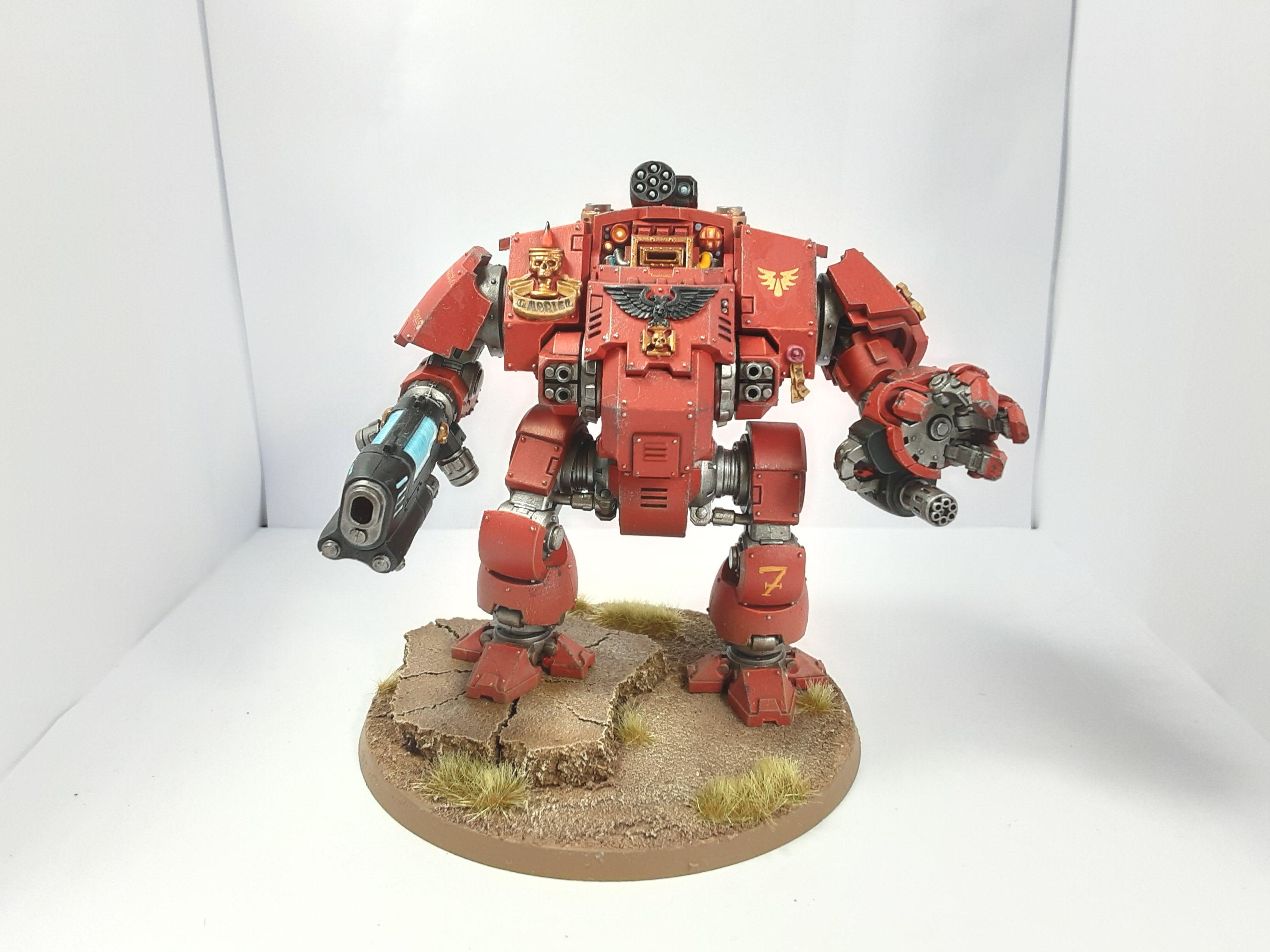 The Reiver Squad took part in the Campaign against Tau. Many Brothers fell during those fated missions. Although Brother Sergeant Aizek showed remarkable command and combat skills, he lost his blood brother to the xenos. Not a day passes without him grieving on that loss. 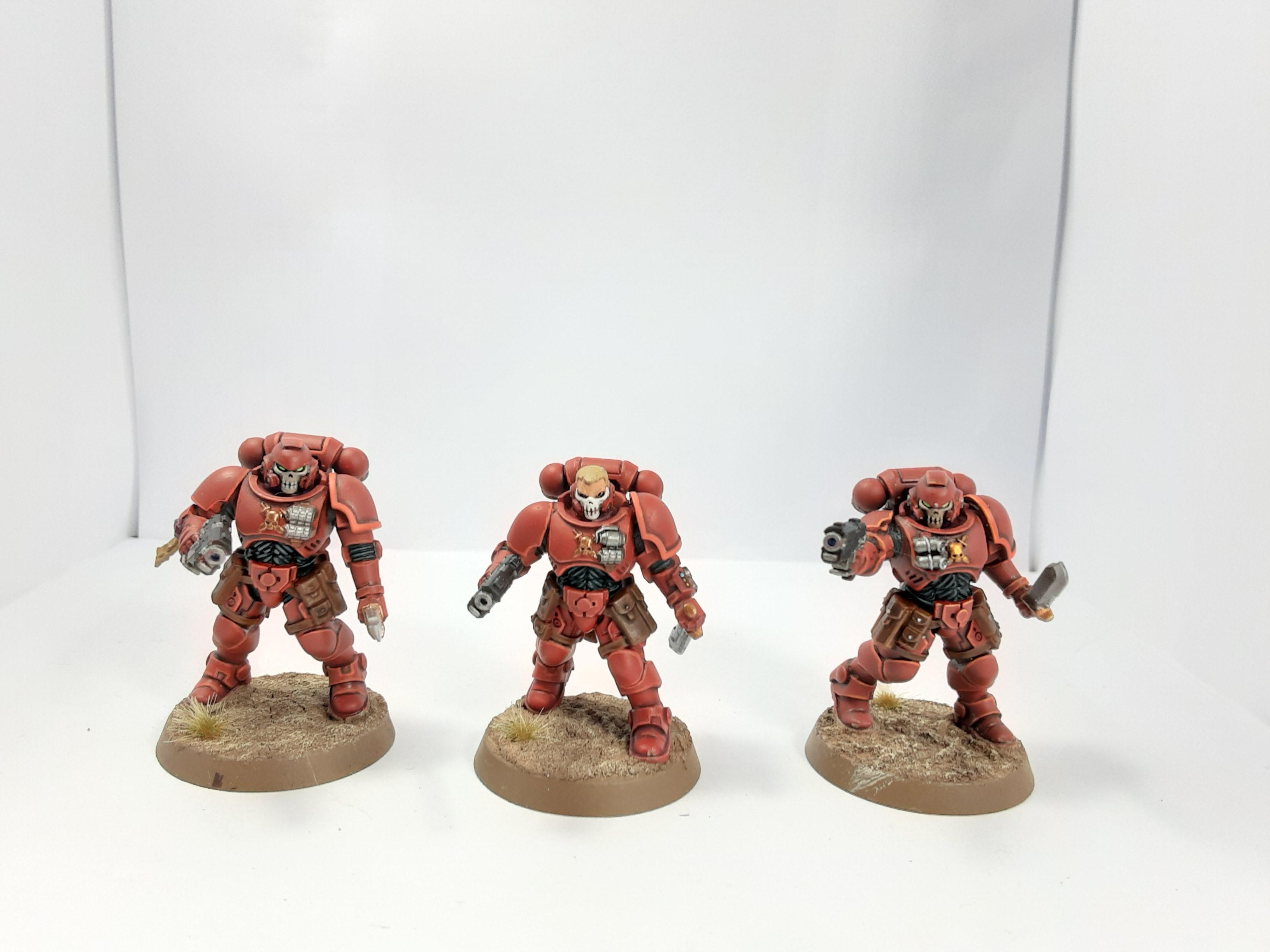 Honorable Brother Rex
Brother Rex took part in one of the KT Campaigns against the Orks. Jump Pack, Lightning Claws and butt-load of attacks meant he would always get in there, kill whatever needs to die, and the usually go out of action himself. His recklessness lead him to mortal injuries and eventual entombment into a Furioso Dreadnought, which did little to slake his hunger for blood and battle. Some time later Rex fell to the Black Rage, and his chassis was repainted and repurposed to a Death Company Dreadnought. 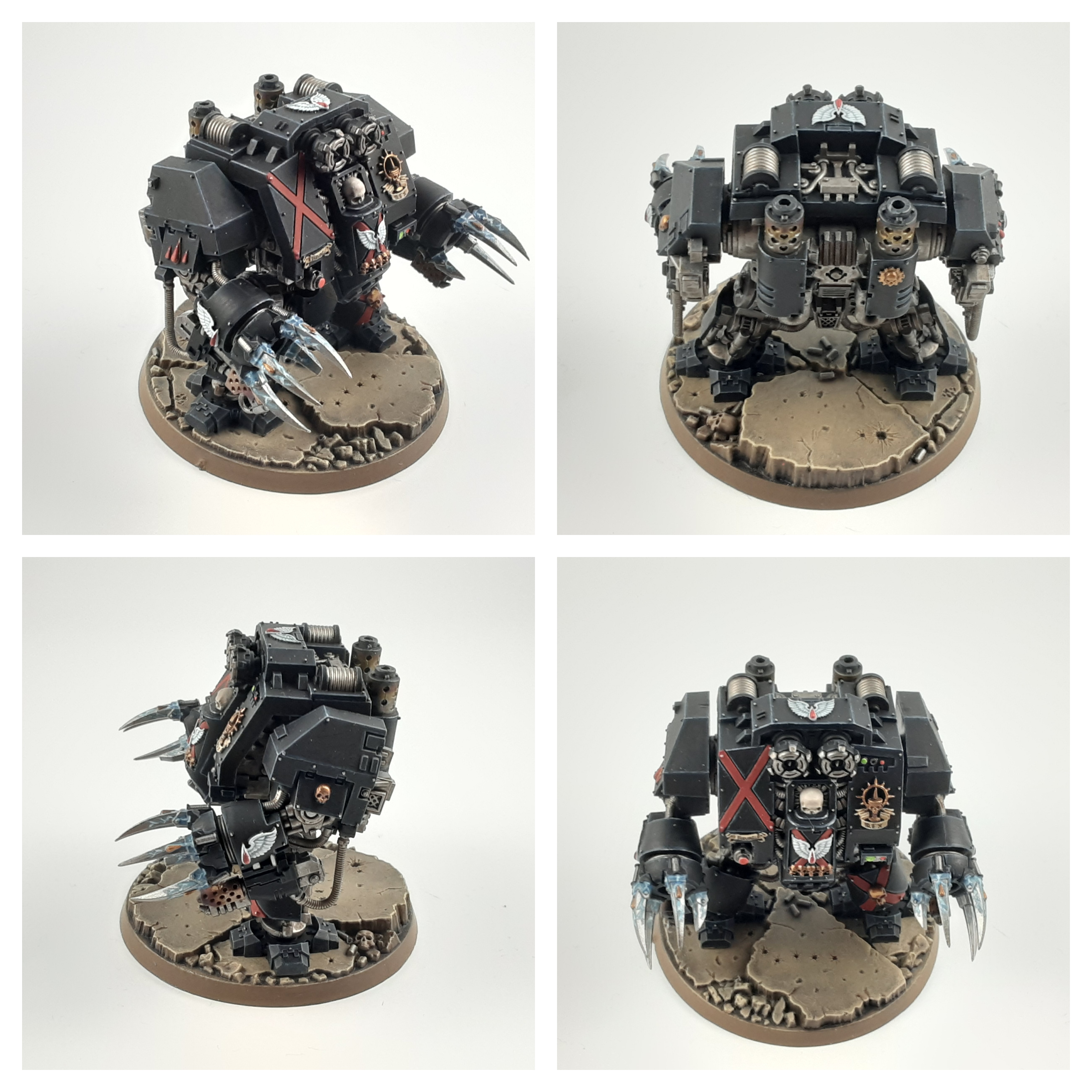 StarSmasha is a sneaky git who would appear randomly during our Campaigns and attack anything in sight. Unbeknownst to the Chapter, he lives on the vessel pretending to be a barrel. 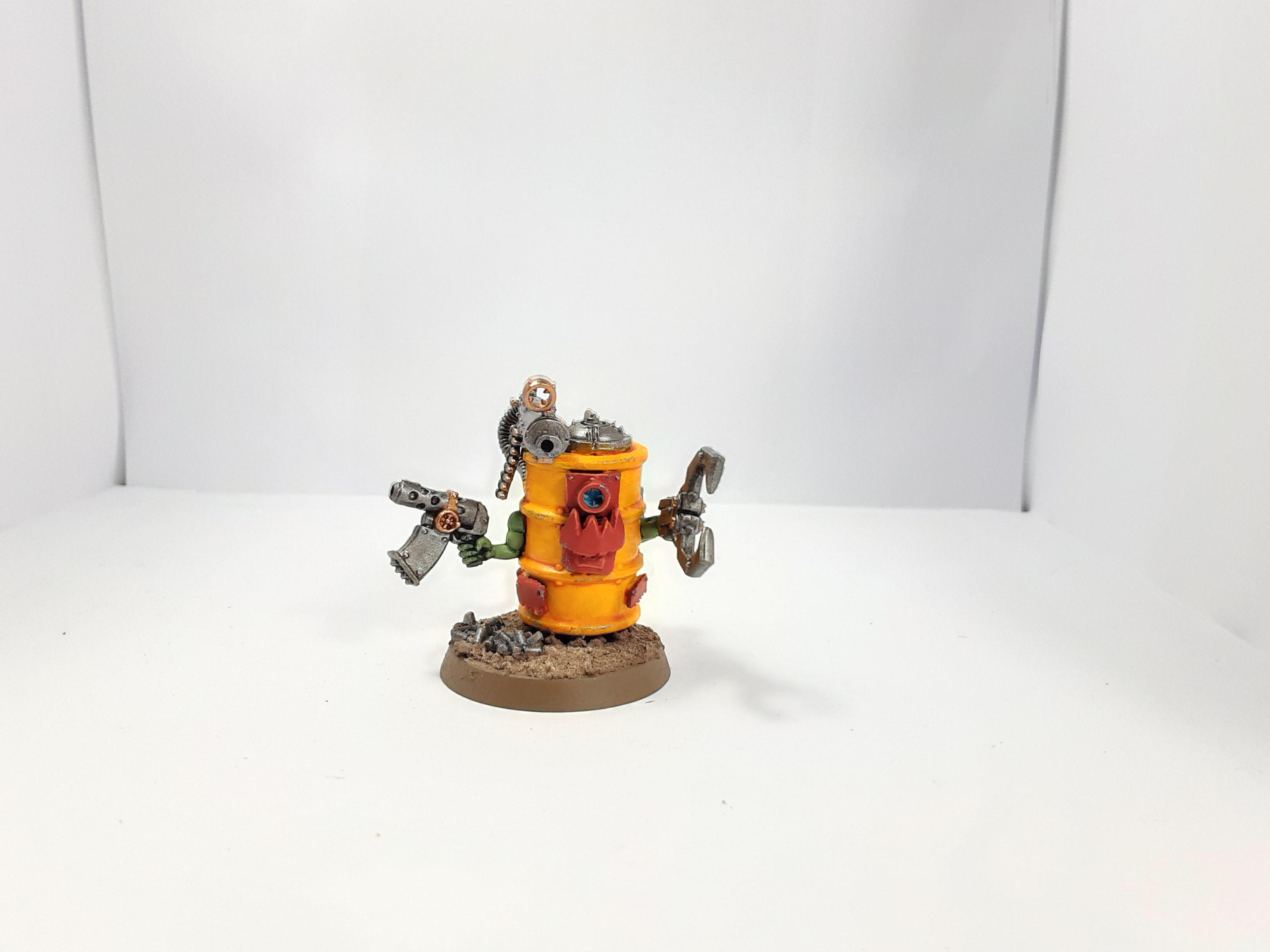 2 years only? Wow. Great amount of models paintet imho. And they look great!

Great collection!
I really like the battle damage on the Inceptors

Edit: as for their constant breaking-off - I would heartily recommend pinning them into some rocks and fogetting those sticks. I did so with mine and never once regretted it. They're in my WIP thread if your interested

Great work so far, love the background too. Those Hellblasters have me wobbling back to painting my Primaris as BA...

That's a really great looking force you've got! Really impressive that you've got to this standard having only been in the hobby less than 2 years as well.
What tufts do you use on the bases? They look a bit more realistic than GW ones.

That's a really great looking force you've got! Really impressive that you've got to this standard having only been in the hobby less than 2 years as well.
What tufts do you use on the bases? They look a bit more realistic than GW ones.

Those are standard GW Middenland Tufts.

Been enjoying Warcry and Blackstone Fortress so I haven't painted my Blood Angels for a long time now, but here is a little addition. Meet Brother Rex.

Honorable Brother Rex
Brother Rex took part in one of the KT Campaigns against the Orks. Jump Pack, Lightning Claws and butt-load of attacks meant he would always get in there, kill whatever needs to die, and then usually go out of action himself. His recklessness lead him to mortal injuries and eventual entombment into a Furioso Dreadnought, which did little to slake his hunger for blood and battle. Some time later Rex fell to the Black Rage, and his chassis was repainted and repurposed to a Death Company Dreadnought.

And this mad lad as a bonus: 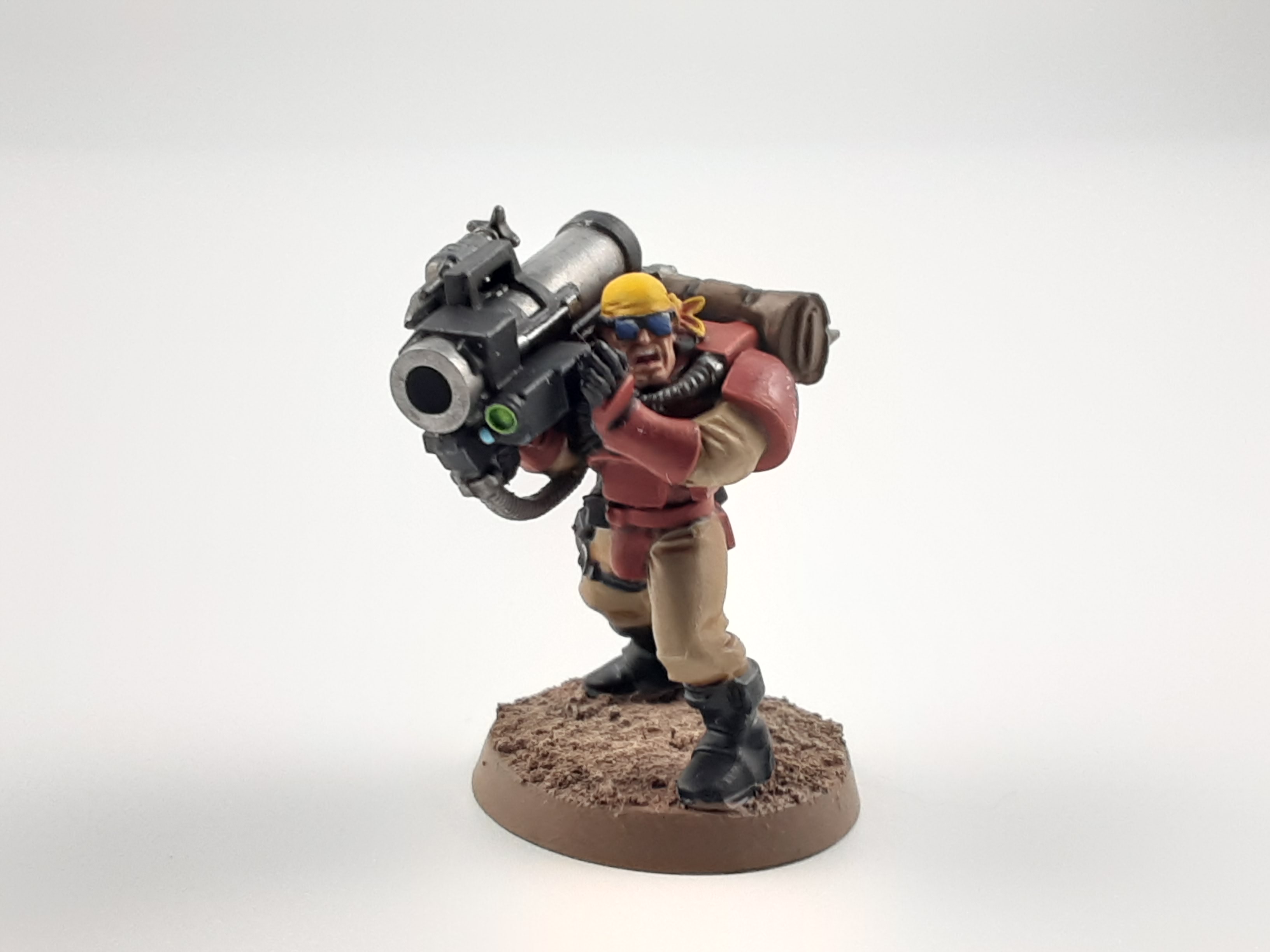 Also tagged with one or more of these keywords: Blood Angels, WIP