26 replies to this topic

So back in 7th edition I like many others have before me fell for the flavour of the month when the Khorne Daemonkin was released and decided that I would start a new army! I threw together a few boxes of Bloodletters, some Berzerkers and a few other bits and bobs and voila I had myself an army. The two old bloodthirsters certainly helped padding out the points. It was a rushed army back when I was a worse painter and I can't say I put a lot of work and effort into it and thusly it looked terrible and since the Khorne Daemonkin are no longer with us they've been stuffed out in a box somewhere so that I didn't need to look at them.

Behold some (admiteddly terrible) pictures of what they looked like. 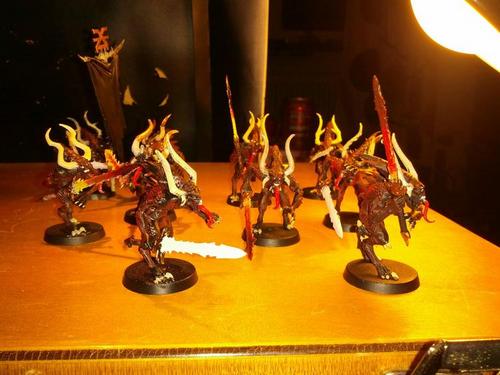 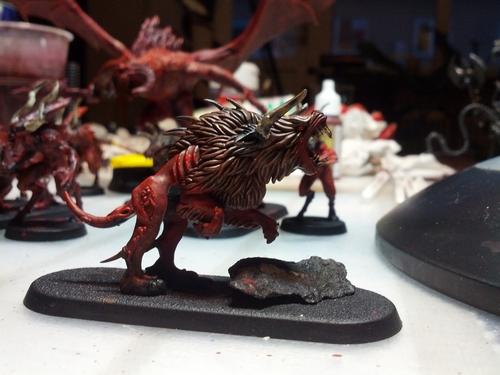 While I learned to paint the colour red reasonably well I cannot say I ever finished a single model, seeing as nothing was ever based. Recently I have been itching to play Warhammer 40.000 again however and since I am still in limbo regarding what to do with my Ultramarine force I wanted something else. At first I made longing looks at a few armies but I've no large sums to spend on lots of boxes beyond what I already have so in the end I dug out my old box of discarded daemons. With some quick maths I figured out what I could muster around a 1500 points in daemons if I put it all together.

All in all as things stand I rougly have.

A neat little army if I can get it all done. I decided I wanted to try and go a bit different from the usual red colours since I had already done that a lot. Recently much of my painting has been focused on the more grimy looking monsters part so figured I can try that for the bloodletters as well. It makes for a pretty quick paint job focused on washes and today I took a bloodletter, primed over the old paintjob and gave it a go.

Here is my first test miniature. 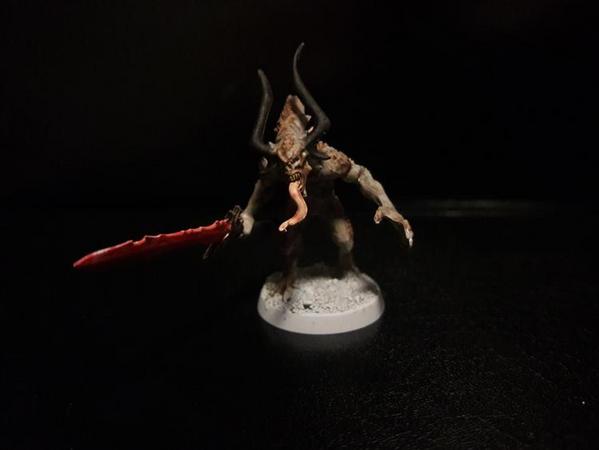 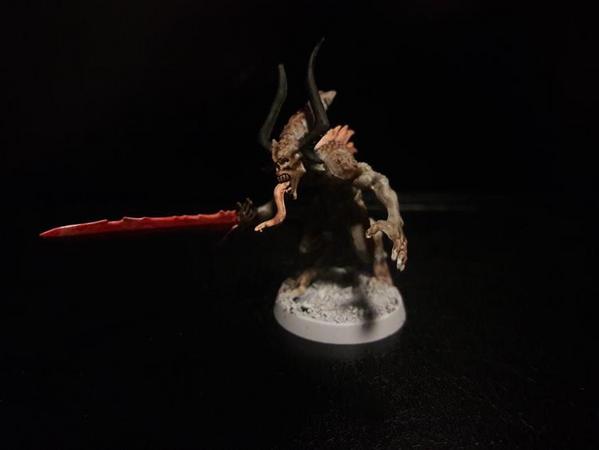 Not 100% done obviously but enough there to see what I'd be going for. Are a few details I am still on the fence on, the red sword for one which did not came out in a way I am overly thrilled about, I also need to decide for a way to paint the eyes to make them stand out and the biggest choice will be how to base them. The majority do have sand on the bases so I am stuck with that, my current idea is trying to go for some manner of dark grey landscape with snow, perhaps with blood and dead grass details.

I quite like the scheme and think it has a lot of potential. A talented artist on FB has done something similar that reminds me of yours, could look to do a base scheme that emulates him:

Glowing pink/purple/red eyes would be my pick

Those are some really striking horrors Loss, maybe I will try and do something similar if I get to adding non-Khorne forces to this. One of the charms with a more neutral scheme is (to me) being able to make different daemons tie together still.

I did some more work on the test miniature today, a few failures with the base trying to emulate what the more talented artist than me above had managed. Settled on a pretty basic stone/snow theme in the end. Here is how the bloodletters looks currently. 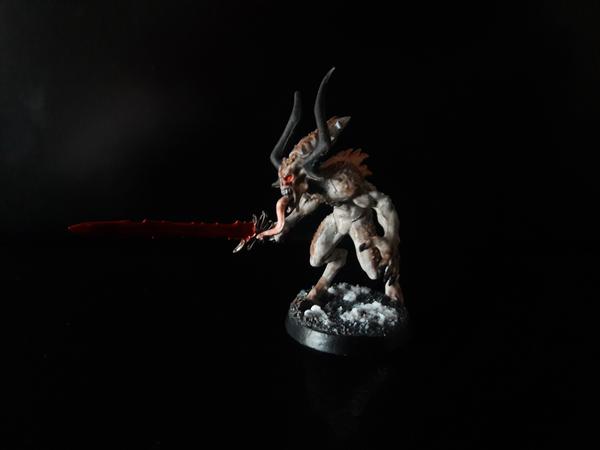 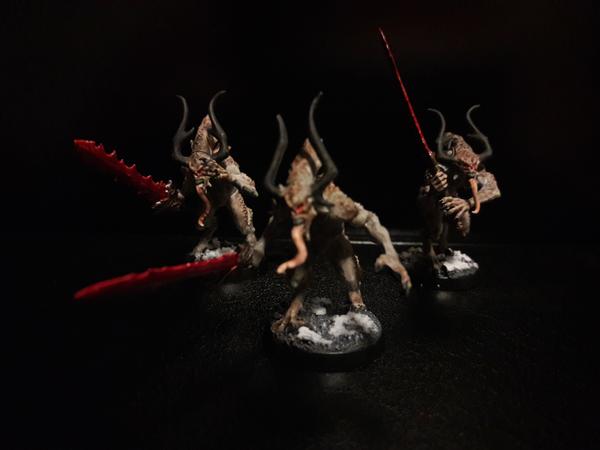 I've been fantasizing about this scheme on Bloodletters for years! Kudos!

Threw together another 5 today as I try to not go mad from painting assembly style, it is not something I have liked doing but with these it seems pretty alright. Another two and I am one third through the Bloodletters at the very least. Taking group photos is always difficult but this one is not too bad on the focus atleast. 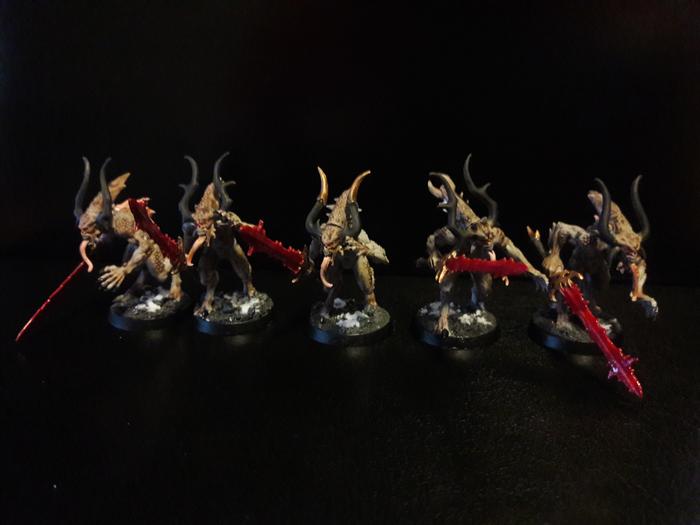 At some point I plan to reward myself with something different to paint albeit in a similar scheme. As I dug around some other bitz boxes I found this little guy I picked up at a convention some year ago. 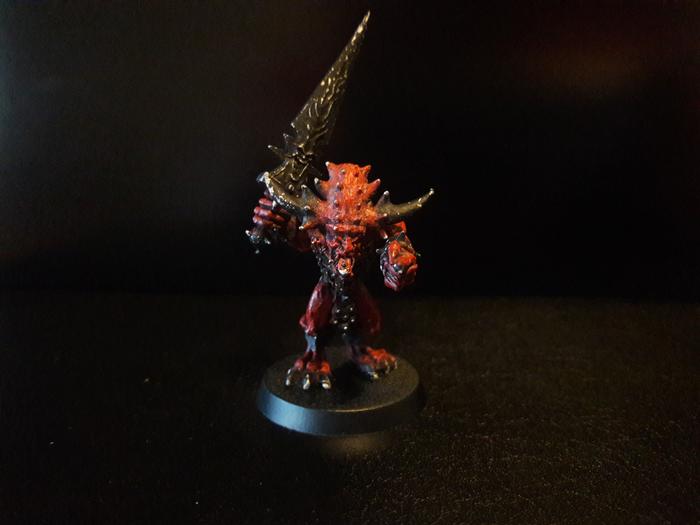 What's a better reprieve from bloodletters than older bloodletters afterall. I figure I will use him as a Herald, or Bloodmaster now I think it is? So suited him onto a 32mm base to stand out a bit beyond his aesthetic. I have not fully decided what colour the armour should be on the daemons with such things but my current thinking is dark to contrast the pale bloodletters.

They came out pretty good so far looking forward to seeing more!

Feeling motivated I set out to finish a squad of ten with instrument, icon and all. Sadly on the second priming disaster struck and I ran out of Corax White. Putting a damper on this little project for a few days atleast. But I got the icon done just before bed at the very least. I struggled for awhile with how to paint the banner but in the end I settled with a very literal view on Banner of Blood and just copied the swords, albeit with some heavier sections to give a dripping effect. 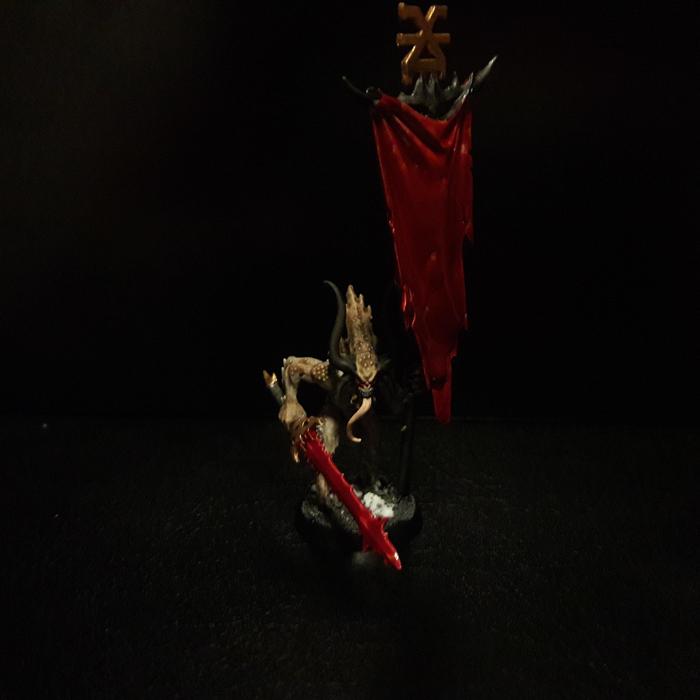 Finally got the primer delivered after a few troubles to today ended up being big primer day. 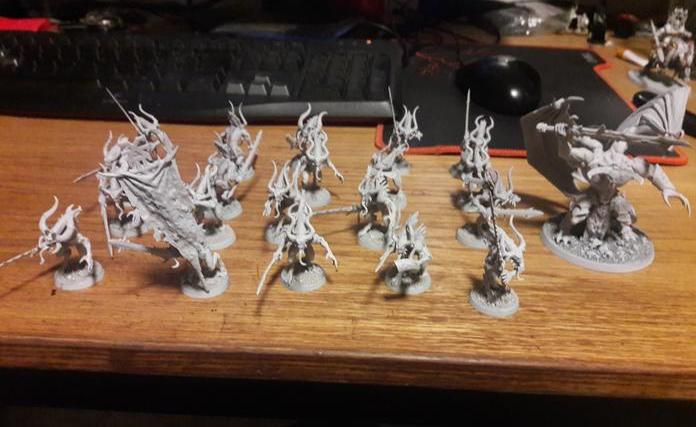 20 Bloodletters and a Daemon Prince ready for repainting.

These are great. It's always interesting to see Bloodletters that aren't red, and this scheme suits the minis very nicely.

It came with the nightfall

The dark that swallowed the stars
One by one, it painted them black
And brought horror to our hearts

Had a rather productive time and banged out the 20 Bloodletters, the Daemon Prince and near done on the Soul Grinder. 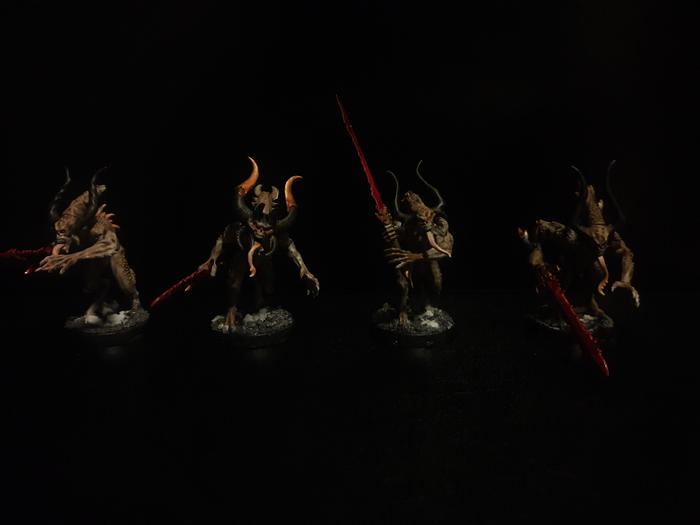 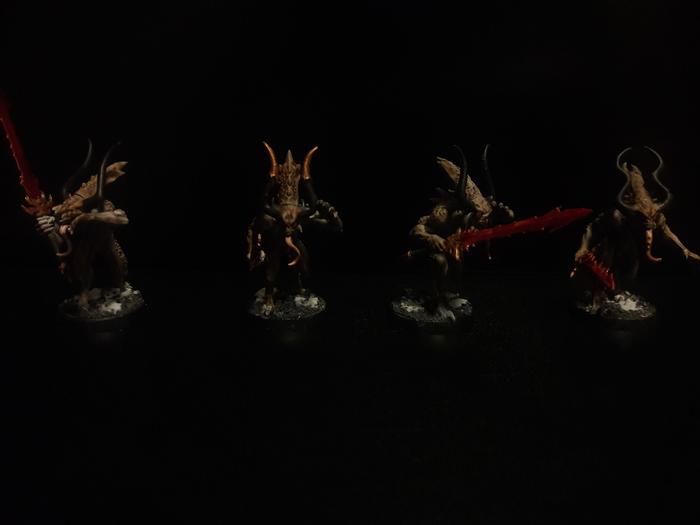 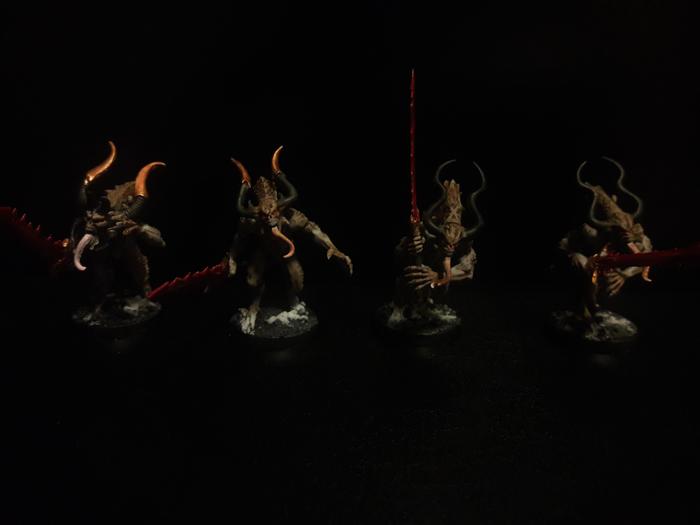 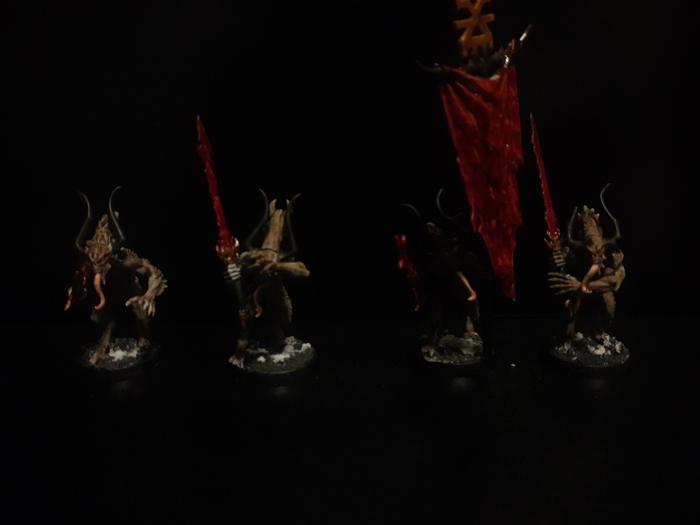 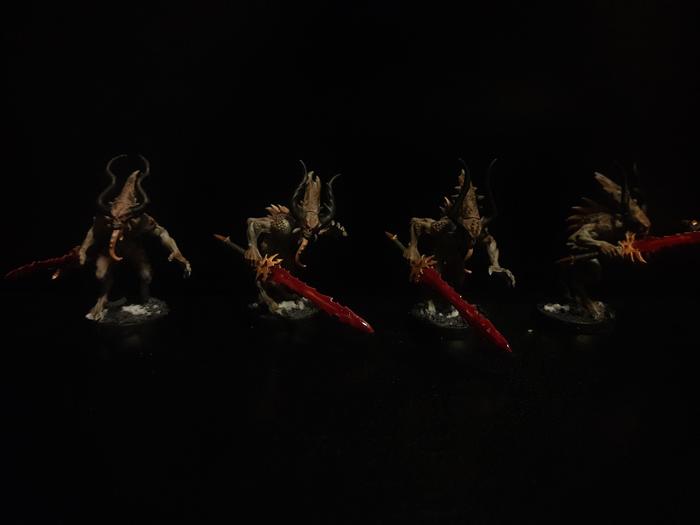 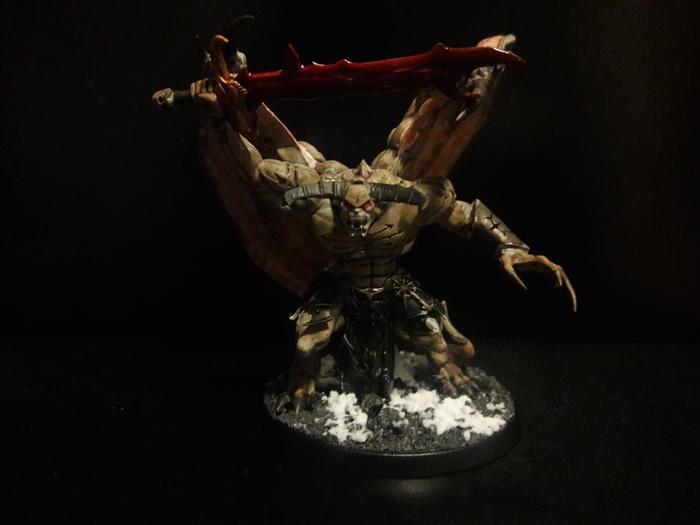 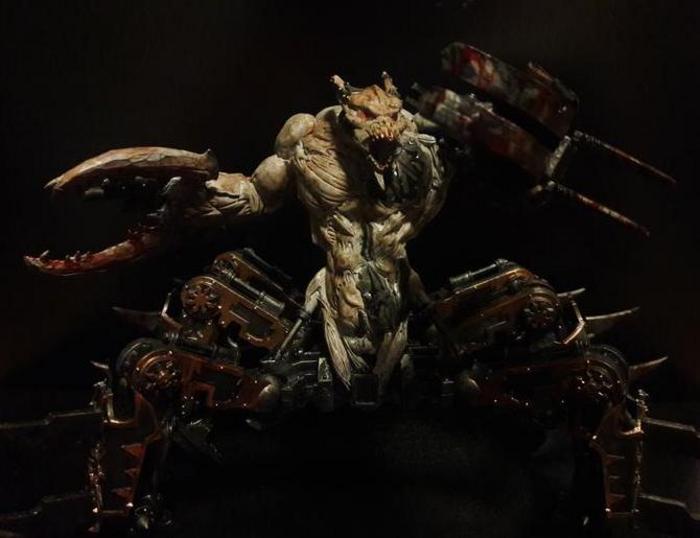 So as things stand currently.

So rather good progress, especially compared to my usual pace. I am uncertain what to do with the flesh-hounds though, in comparison to the current lovely miniatures I feel the fantasy warhounds a bit lacking, and they are all attached to old biker bases. Any opinions there?

I need your paint recipe, to get an idea of what I'm doing. I've seen pale Bloodletters done before and I want to do a set. I've got Bloodletters in the works for Christmas, and I wanna do them like this.

"All power demands sacrifice and pain. The universe rewards those willing to spill their life's blood for the promise of power." - Sindri Myr

"There is no meaning, no purpose. We murder, we kill. It is mindless savagery, this UNIVERSE is mindless!" - Azariah Kyras

I need your paint recipe, to get an idea of what I'm doing. I've seen pale Bloodletters done before and I want to do a set. I've got Bloodletters in the works for Christmas, and I wanna do them like this.

For the skin it is super simple. Just a Corax White primer, then a wash of Agrax and then Reikland Fleshshade on the pink bits, over warts and other texture points on the skin, hands/feet/face.

Today I worked on an old conversion I had lying around using the Herald pieces from the Blood Throne unit and the most Bloodletter-esque bitz of the Skullreaper box set. Not my best work but he will make do as a Bloodmaster. 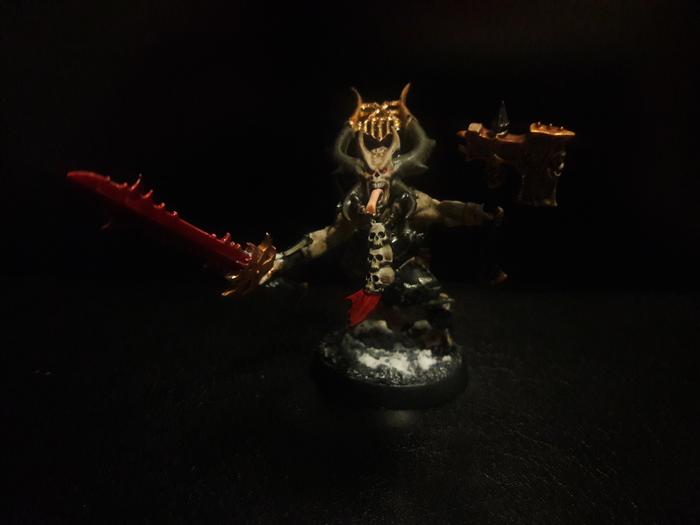 Looks good I really dig the khorne skull on the horns!

Started working on the Bloodcrushers, did a bit of thinking on the colour of the Juggernauts and figured they could use more contrast so I settled on very dark mounts and the same pale Bloodletters. Been making good time on going through my old heap of plastic which is nice, had a long stint of not painting much at all. It is encouraging to have a proper project oncemore. 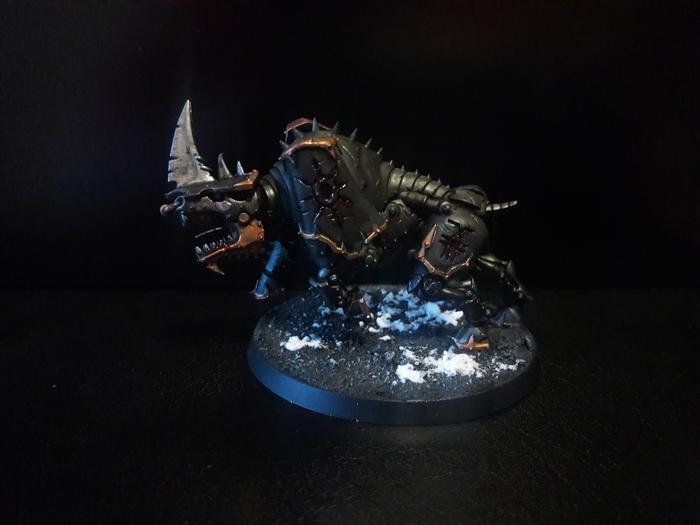 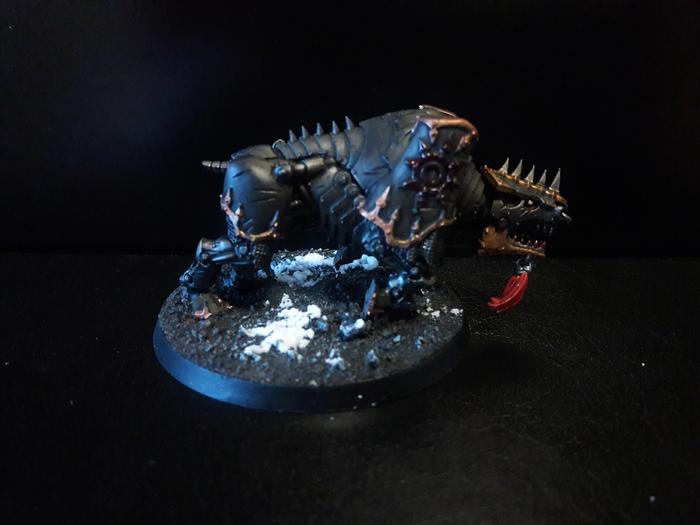 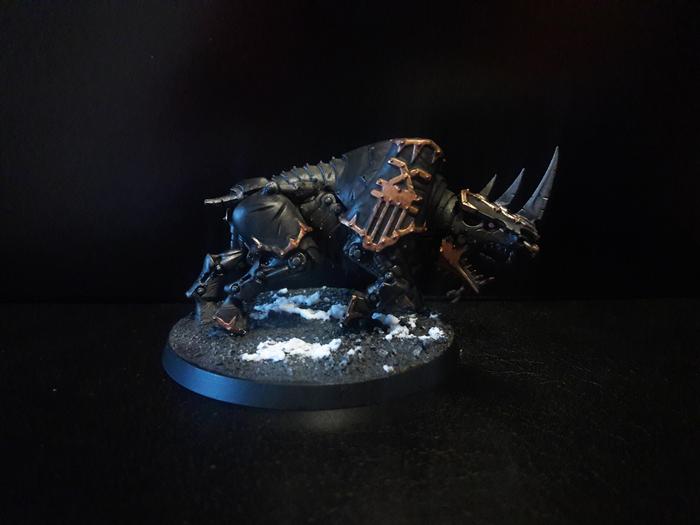 I like it think it looks good seeing the different ways people paint things, rather than just the cookie cutter ones.

Torbenos, you have really done a good job with those pale Bloodletters! I have never been very fond of Khorne models, and the Bloodletters always left me cold, but with this colour scheme I like them! I look forward to seeing the pale Bloodletters as riders for the juggernauts, that will make them look rather unique.

Glad folks are liking the look of them. 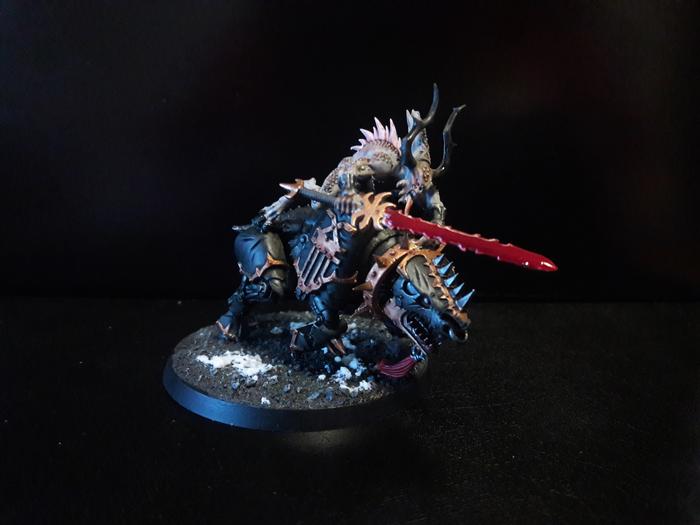 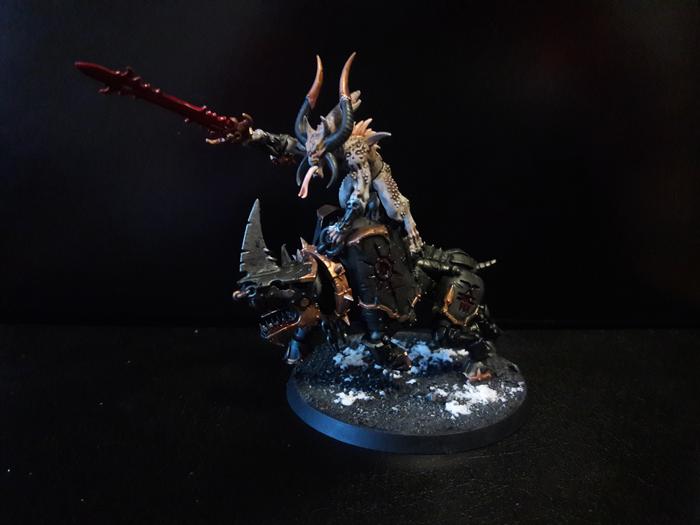 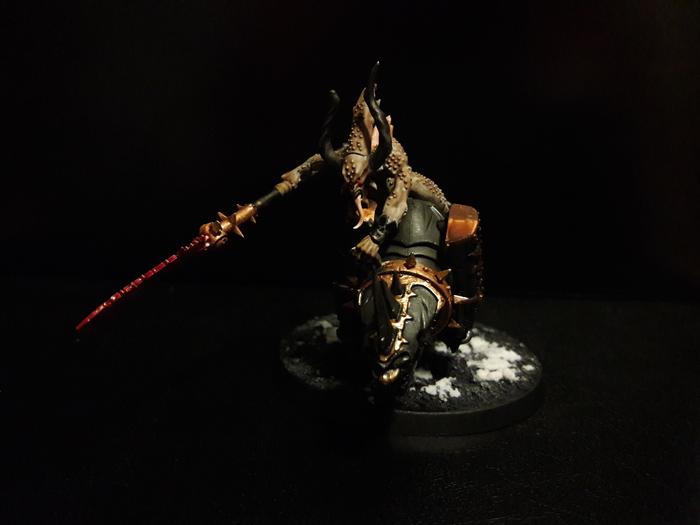 Started to experiment with the colour scheme outside of the Khorne realm for the first time as I struggled with the many details on the Skullcannon. Dug out some Plague Marines I had from one of the smaller 8th edition starting boxes and the lovely Syll'esske which the girlfriend gave me as a gift earlier this year. Not so sure if I got it working with the marine, I tried to use the "skin" colour on the armour with accents of red. 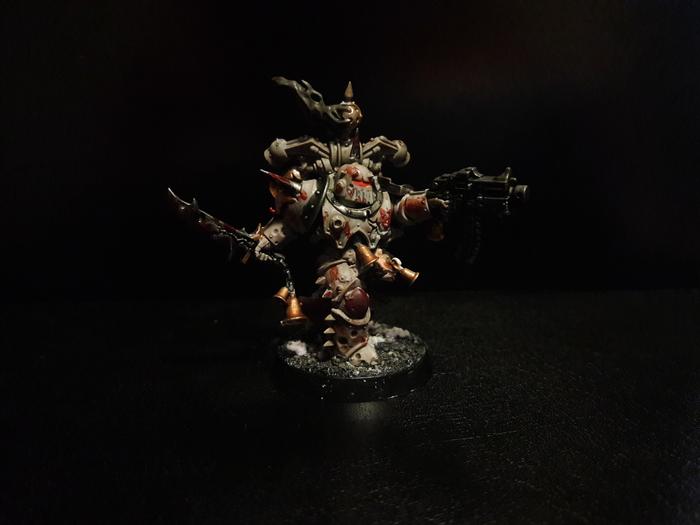 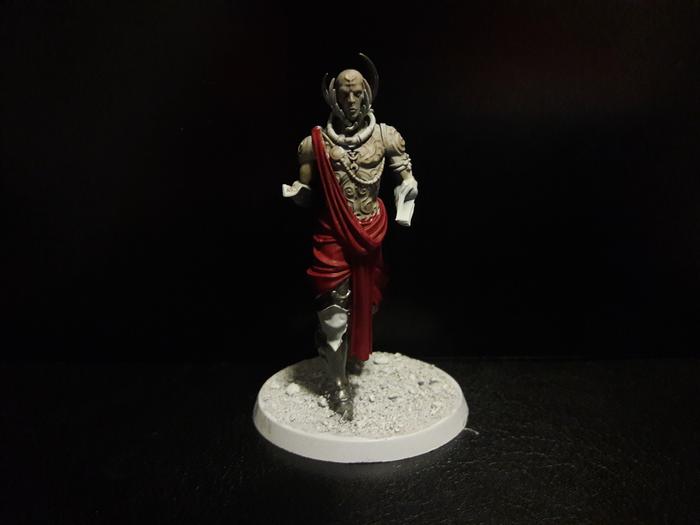 Suggestion: Photograph dark-colored models (like the Juggernauts) against a light-colored background, and vice versa. The contrast will make your models easier to see.

Will keep that in mind Bjorn, I am quite a lacking photographer sadly.

Thanks for the kind comments Kolgrim and AstralPanda.

Today I dug out an old Exalted Champion miniature I had once made out from a AoS kit. Back then I tried to paint it in a white and red colour scheme which I struggled with greatly. Decided to try this new scheme on it as well. Not entierly happy with how it turned out but it's workable, tried to give a bit of a biological/living aesthetic to the demonic aspects of the armour. 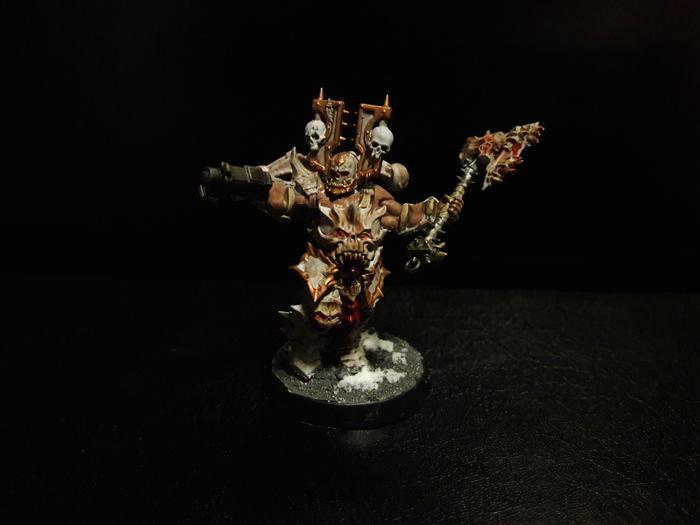 I also continued to work on the excellent Syll'esske. I was unsure how to handle the skin in general, I sadly lack the paints for the more usual violet Slaanesh aesthetic. I settled on trying for a blue/grey appearance with the blue wash. I am unsure if I like how it ended up or not. Any opinios/suggestions from folks? 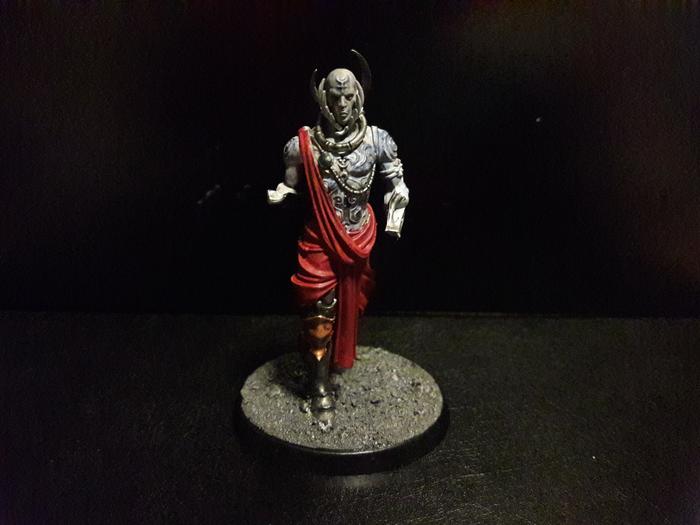 The work continues on the Daemon Prince, added on the axe after awhile and painted more of the details. Struggled a little bit with taking a good photo of this one. 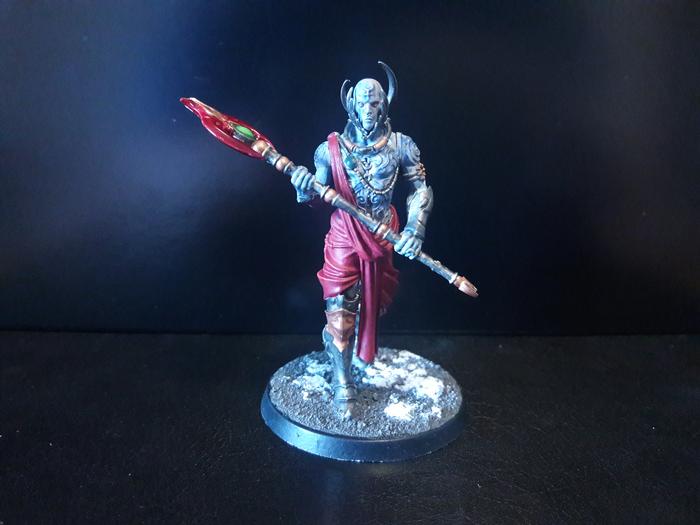 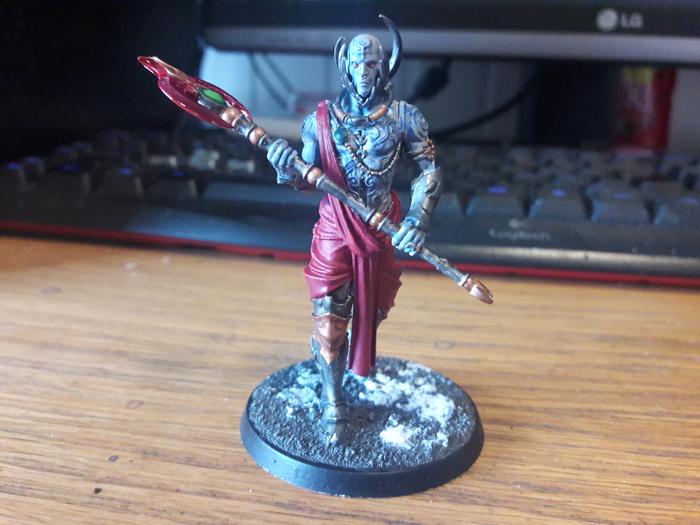 He looks most promising. I commend your painting skills.

Also tagged with one or more of these keywords: Warp, Daemon, Khorne