19 replies to this topic

Does anyone run one of these? What are people’s thoughts?

I’m considering one as a home for some wardens... maybe even terminators (I’m getting squads of allarus and aquilon together... but that makes three squads I’d like to deep strike and I only want to do that with one... because I’d like to use the vexilla strat and have them in turn 2! So that means that a transport for 6 would be perfect)

Also, I just got a couple of Pallas and I love the way they look, so kinda sold that way as well.

What is everyone’s thoughts?


Pallas pic because I like the gold pod racers! 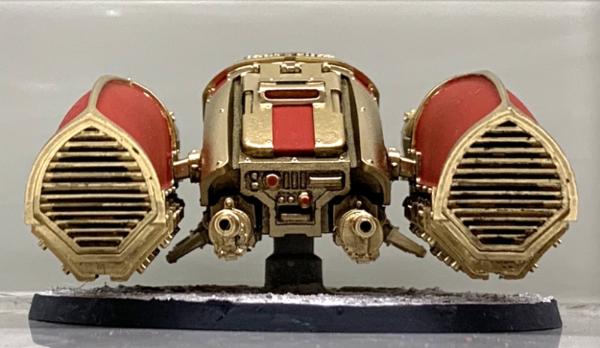 It’s something I’ve been toying with, i’m just not sure it’s worth the points cost. The decision I keep coming back to is do I want 9 Wardens and use FGLTC or 5 Wardens in a Coronus? Personally I don’t see the point of Terminators in it unless the build forces it (ie. Wardens/Telemons in deep strike already).

Also, the price cost puts me off. If it was £50-70 I’d be way more tempted. It’s a gorgeous model though and looks a blast to have as part of an army.

I prefer the smaller Pallas. They are an absolute bargain for the points. I think they are a good way to split your fire power across multiple units. For me, the Coronus needs to have a higher transport capacity for me to consider it.

For me the Coronus just isn’t worth it’s points in any list. It might be different if you could disembark after it moved but as it is, those points could be better spent on basically anything else.

I prefer the smaller Pallas. They are an absolute bargain for the points. I think they are a good way to split your fire power across multiple units. For me, the Coronus needs to have a higher transport capacity for me to consider it.


I was wondering about that but also thought that the coronus has double the firepower for only just over twice the cost, so it’s not too much of a levy for the transportation

I wouldn't say it has double the firepower as the Coronus has two different guns. For 45pts less you get two flat 3 damage weapons on a more mobile platform, split over two units. The Coronus would have to move forward to unload it's troops, it would likely be an easy target for charges and enemy weapons, where as the Pallas can keep itself at a distance and manoeuvre around the enemy. I think the main problem I have with the Coronus is that it's very expensive for something that does not really have a chance of earning it's points back. It's a shame because we really need a cheaper transport, and the model is gorgeous.

Yeah, you miss the anti vehicle mode, but it is slightly more than twice as good at anti-personal!

A jetbike captain, double pallas, fully loaded coronus bomb. With a couple of astra militarum characters to sit on objectives and not be targetable - as the coronus will unload 6 elite Custodes on top of them. Vexilla can just advance behind the coronus... he should be just about able to keep within 6 of it if they start adjacent.


(Really, just trying to brainstorm ways to get more elites into melee without being shot, or all using the vexilla stratagem - while using a cool transport model)

I’d already got wardens ready, now tonight I’ve almost finished up allarus... gotta figure out a way to get them on the table 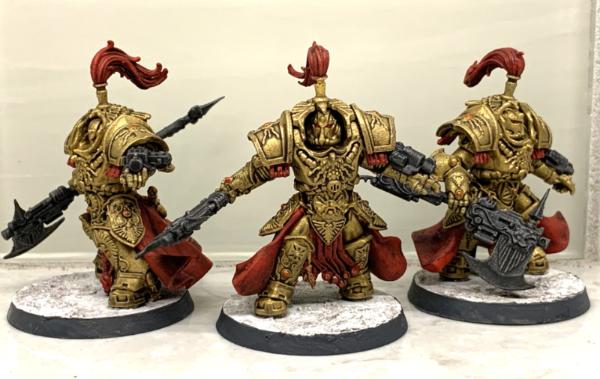 The Cronos is tough as nails but it doesn't have the same punch as a land raider.  I own one but I'm more likely to use a land raider than a cronos but our army is so expensive that I rarely use transports, its better to teleport your unit in with the stratagem.

The only time I saw a Cronus used effectively was because it had the fly rule, and the brokenness of ITC flying rules.  Basically the guy camped three of them on top of a ruin's edge, where it would be impossible to place another model, thus it was impossible to engage in melee.  It could still shoot, and drop it's guys on the 2nd level of the ruin.  It was gimmicky, and it lost him the round trying to pull it off, and very likely the respect of anyone watching.

Melee focused armies are dying in 8th, and transports sadly suffer the same fate unless they have 20ish wounds and IH gimmicks.  If they made the Chronus a assault vehicle, I'd buy it in a heart beat.

I don't really get the Transport rules for any army. Requiring units to disembark BEFORE the Transport has moved defeats the entire point of a Transport IMO.

The only Transport in Custodes that I've seen effectively used is the Orion Assault Dropship.

Right, because you can move and then disembark.  That and it has literally all the guns.  It's a flying Stormlord.  And the Attack ship whatever is a flying Shadowsword.

I don't really get the Transport rules for any army. Requiring units to disembark BEFORE the Transport has moved defeats the entire point of a Transport IMO.

The only Transport in Custodes that I've seen effectively used is the Orion Assault Dropship.

This^^, yeah one of the biggest downsides to transports is you have to waste one or two turns driving then another to disembark, forget about picking up other units after they have disembarked one.

Well, I’ve put my grav carrier together, so I may go back to trying pure Custodes in small LGS game nights. Thinking of a 1000 point vanguard: 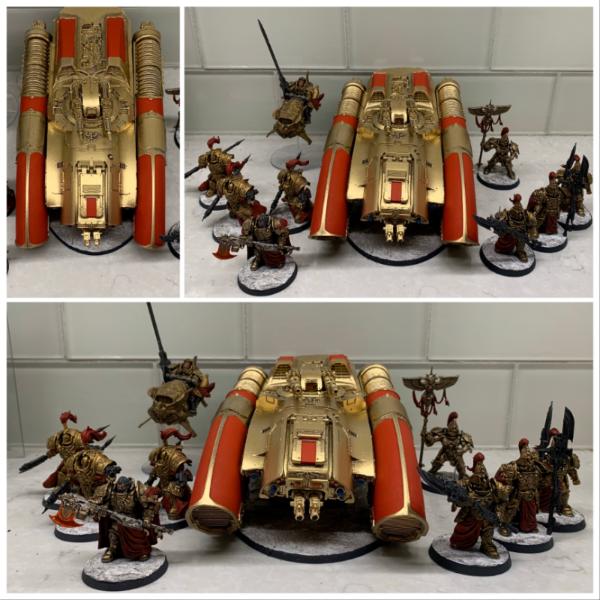 Wardens and Allarus in the carrier, chaperoned by a bike captain. Also a -1 to hit vexilla and a shield captain, who can hold backfield objectives if needed.

Using it as a party bus for a shield captain, squad of spear guards (or three allarus depending on board objective locations), and the vexilla (the latter starting outside it for the -1 before upfield move.

Turn 2 (or 3 if that's better tactically) 3" disembark for the banner, then move, then FGLTC a galatus in their face while also having the allarus waddle out to help, has been very good for me.

All the while, it's doing reliable chipping away at vehicles with the turret, and plinking away high value 1W infantry with the chin gun.

Working on getting an orion up and playable soon for 2k+ games because I love how sturdy the Custodes are in aggressive "waagh" tactics from a left or right flank along main advance of sloggers and bikes.

I’ve been thinking 6 rank and file (well, elite non-characters) in the coronus as characters can hide behind it and troops can take shields. It’s really wardens and allarus where I feel I need to compensate for the not having a great invulnerable save.

Although... I was also considering 3 allarus (all I have), a couple of captains and a +1 attack vexilla bearer (now he is cheap). 32 attacks (not counting misericordia), as opposed to 24 the other way.

I got given one for Christmas so am hoping to get use from it in the new year. How is it in HH?

I play both 40k and 30k so would be happy with tips for either.

Now choose, either die in the vacuum of space or....
Tell me how good you thought my poem was.

Used it in apocalypse and it tanked a lot of the firepower from a Warlord Titan. Make of that what you will!

Used in 40k against the wall of genestealers. They can be as fast as they like but slap the coronus in a choke point and laugh as they scratch the paint then you hop out with slaughter boys and fly over the stealers with the coronus. Absolutely awesome.