Since the release of the new Space Marine codex and the Raven Guard supplement, I feel like space marines have been given a new lease on life. Right before 8th Edition was announced I had decided to start a true-scale project for a new army, and had settled on the Raptors, as the rules they had from Forge World at the tail end of 7th edition were fun and fluffy; and I had always been drawn to the lore of the chapter as a fun contrast to some of the more outrageous concepts in the setting.

Once the images surfaced of the the scale of the Primaris Marines, I realized true-scaling was going to be a lot easier than I thought. I began slowly building the force, but didn't get much beyond putting the models together from Dark Imperium before becoming immensely discouraged with the rules of any Space Marine chapter other than Ultramarines. Fast forward to the Shadowspear box set and now this new codex, and I have purchased my tickets on the hype train.

My intention is to build, paint, and play a force of Raptors representing the 5th Battle Company. I'm going to have it hew as closely to the codex disposition of a standard Battle Company as much as is reasonable; six Battleline squads, two Fire Support squads, two Close Support squads, and a command staff of one captain and two lieutenants, along with support staff from the Librarius and the Apothecarion. This will be a very infantry heavy force, to represent the fighting style of the Raptors: long term forward infiltration of heavy equipment as well as crew and support sections that then can support heavy infantry shock assaults, focusing on decapitation strikes and the swift reduction of the command and control capabilities of the enemy forces.

The following images showcase the almost completed portions of the force, mostly the Battleline squads and the command section.

Also, apologies if this is not the place to be posting this, as I figured my fellow followers of Corax would get the biggest kick out of this progress log!

First up is the members of the command staff that I consider finished, except for a few minor touch-ups. Two lieutenants, each usually charged with leading a demi-company, and the Apothecary assigned to the company. I'm still deciding on whether or not he should have company markings to match the rest of the force. 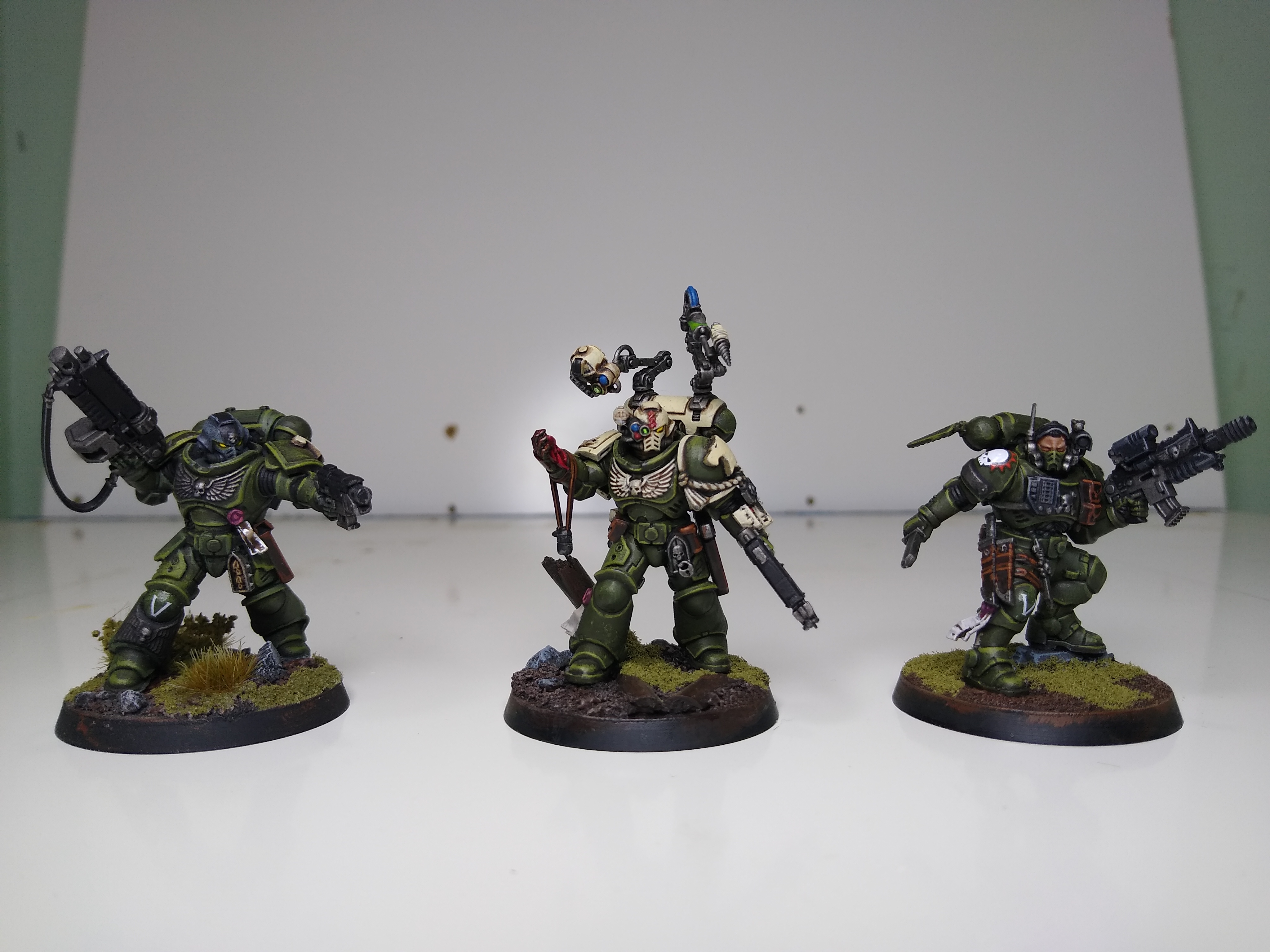 Next is the unfinished fellows from the command staff, the Captain and the Librarian. Both still need more paint as well as decals and to have thier bases finished. 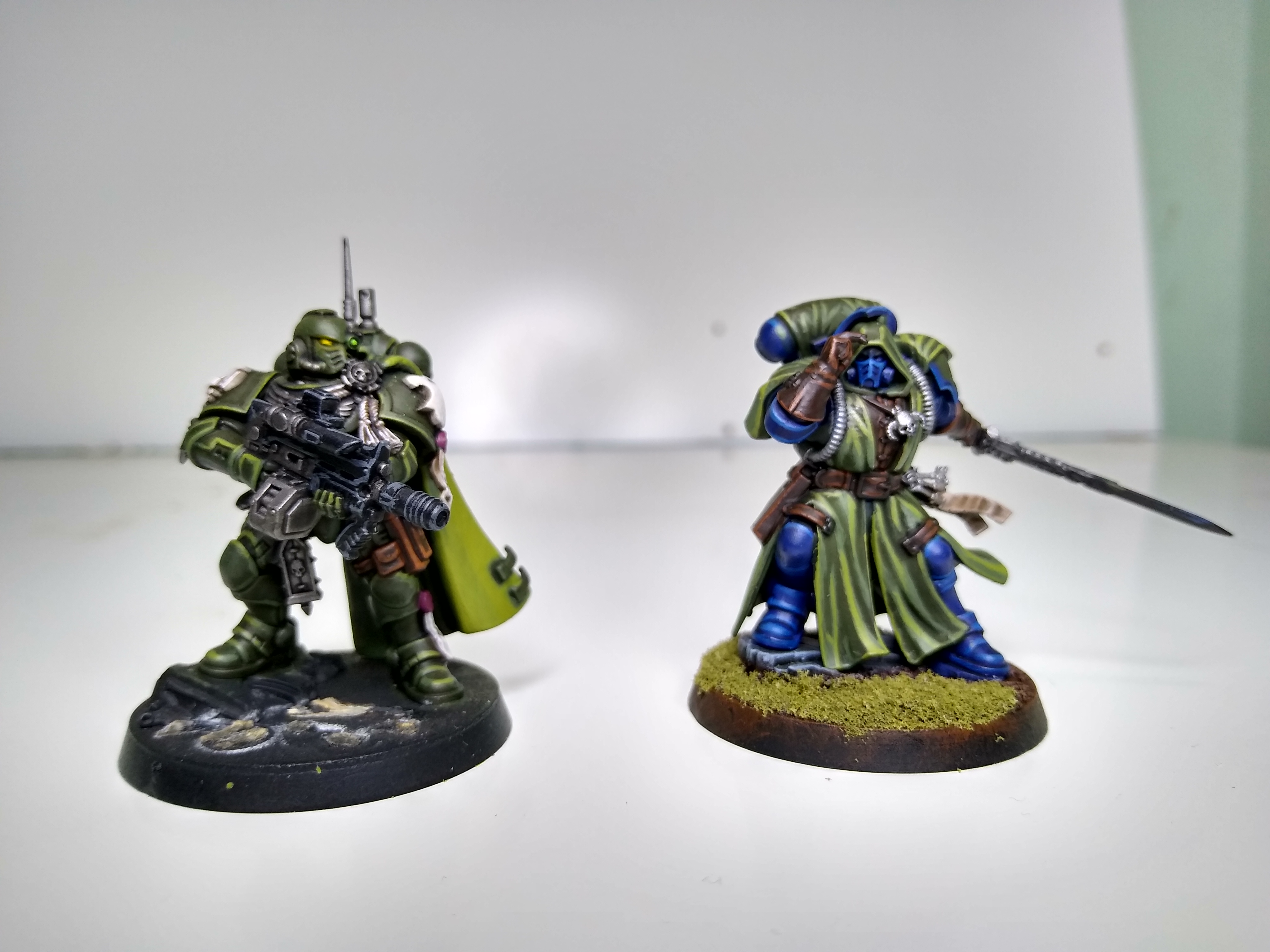 These three big boys are the first fire support squad, deployed in Centurion armor. They may not look like it, but a lot of conversion work went into these models, both in order to make them taller so that they would still scale well with primaris sized marines, and to have a sleeker, more exoskeleton feel than standard centurions. 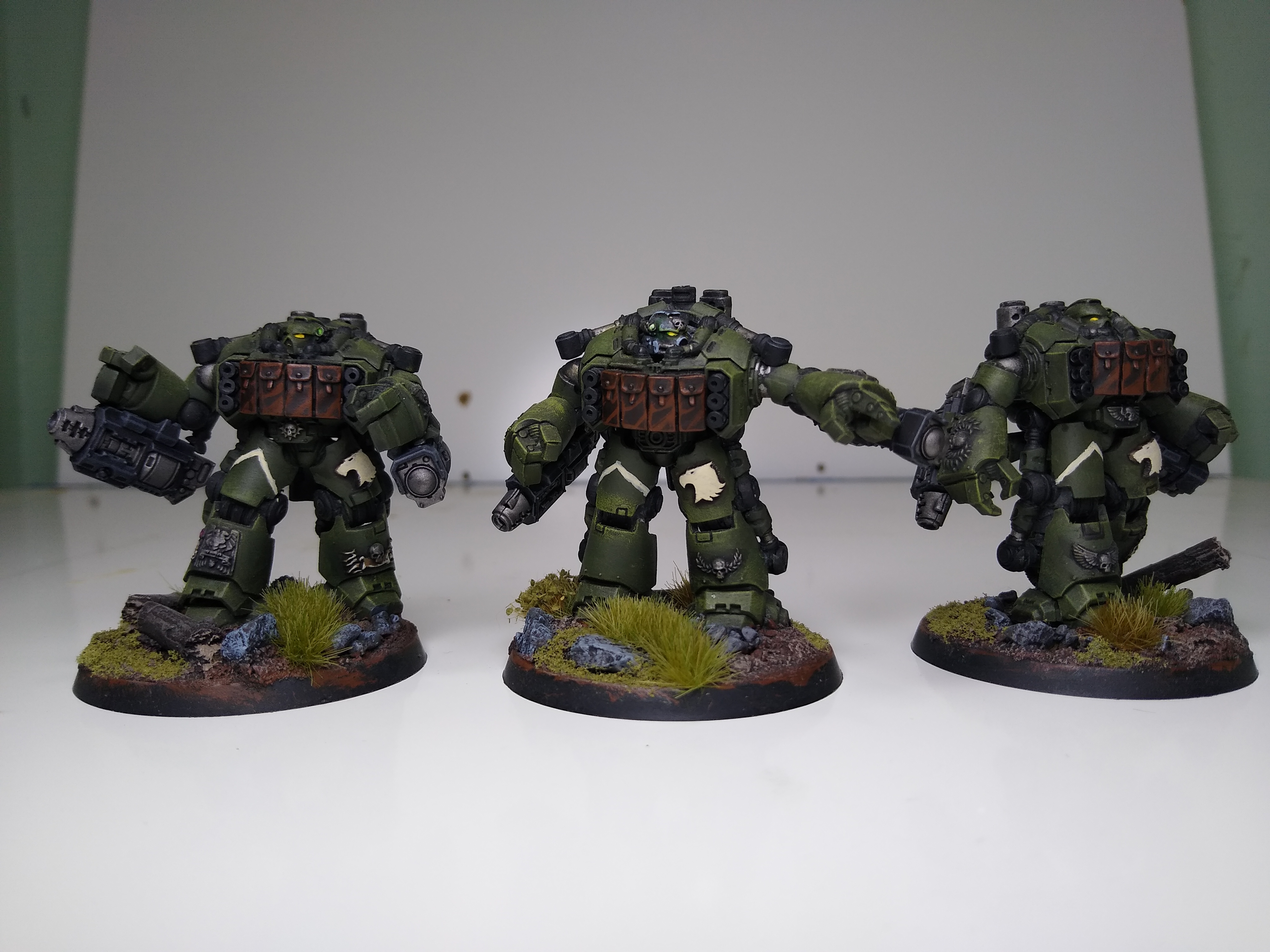 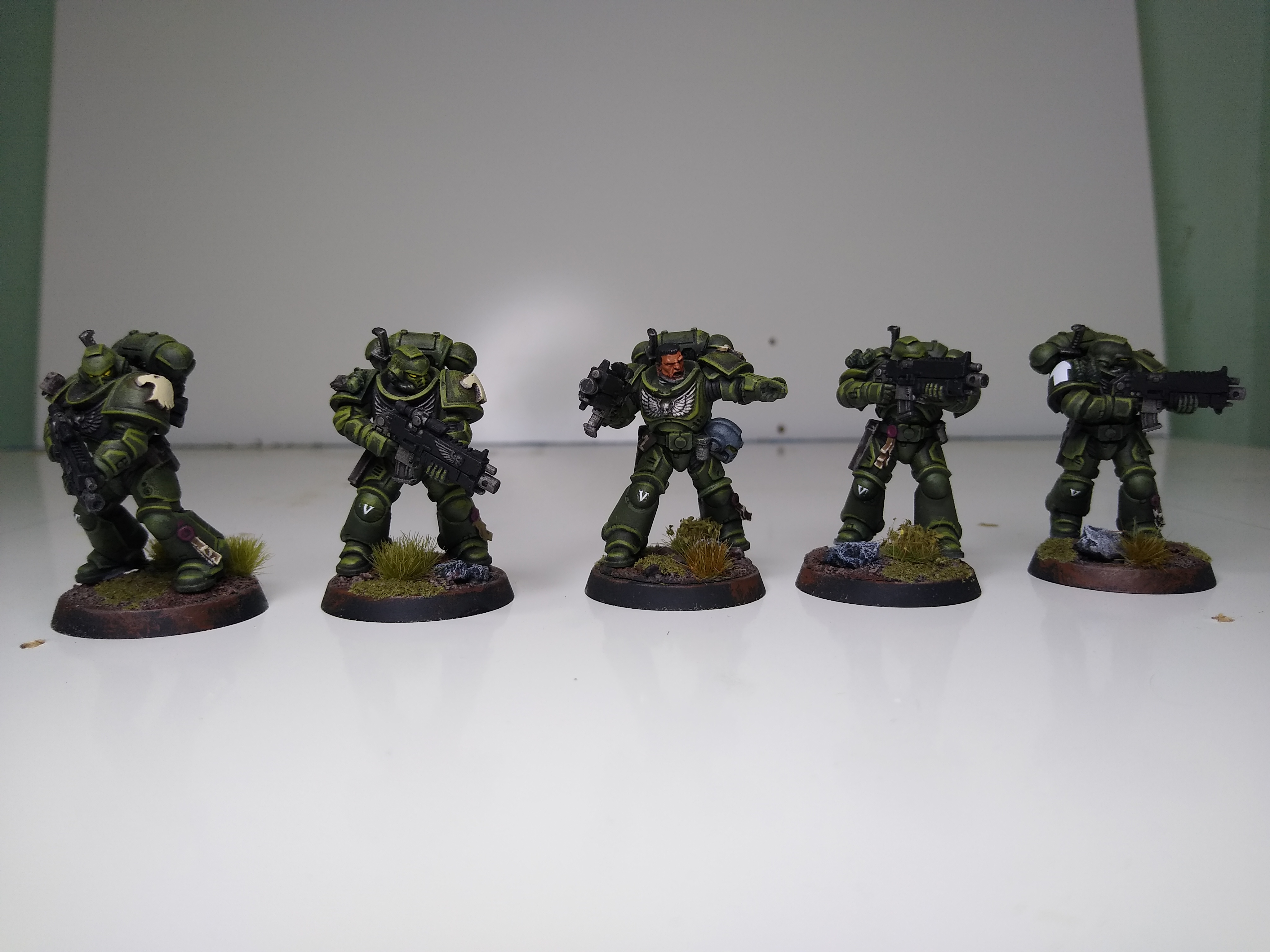 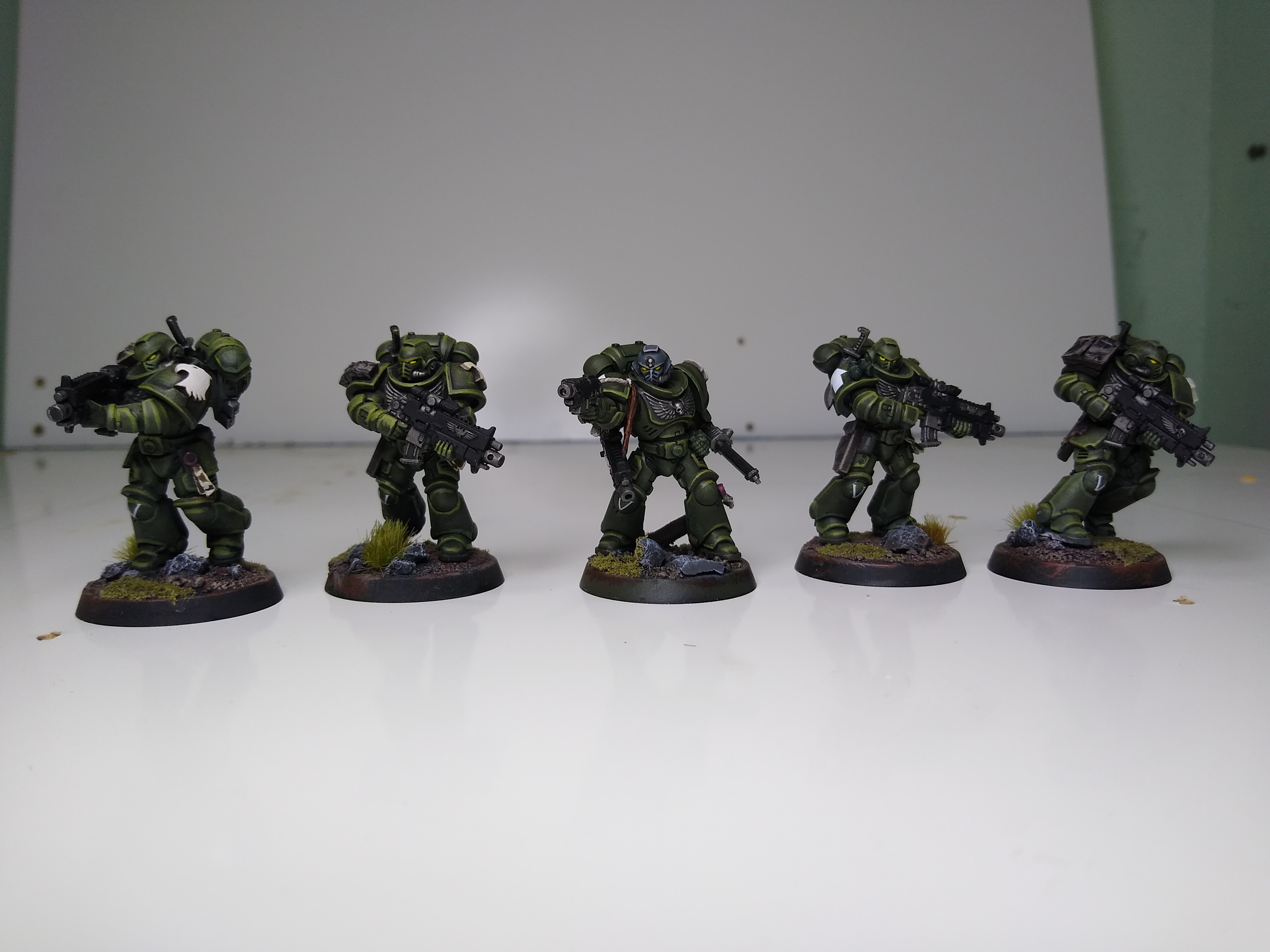 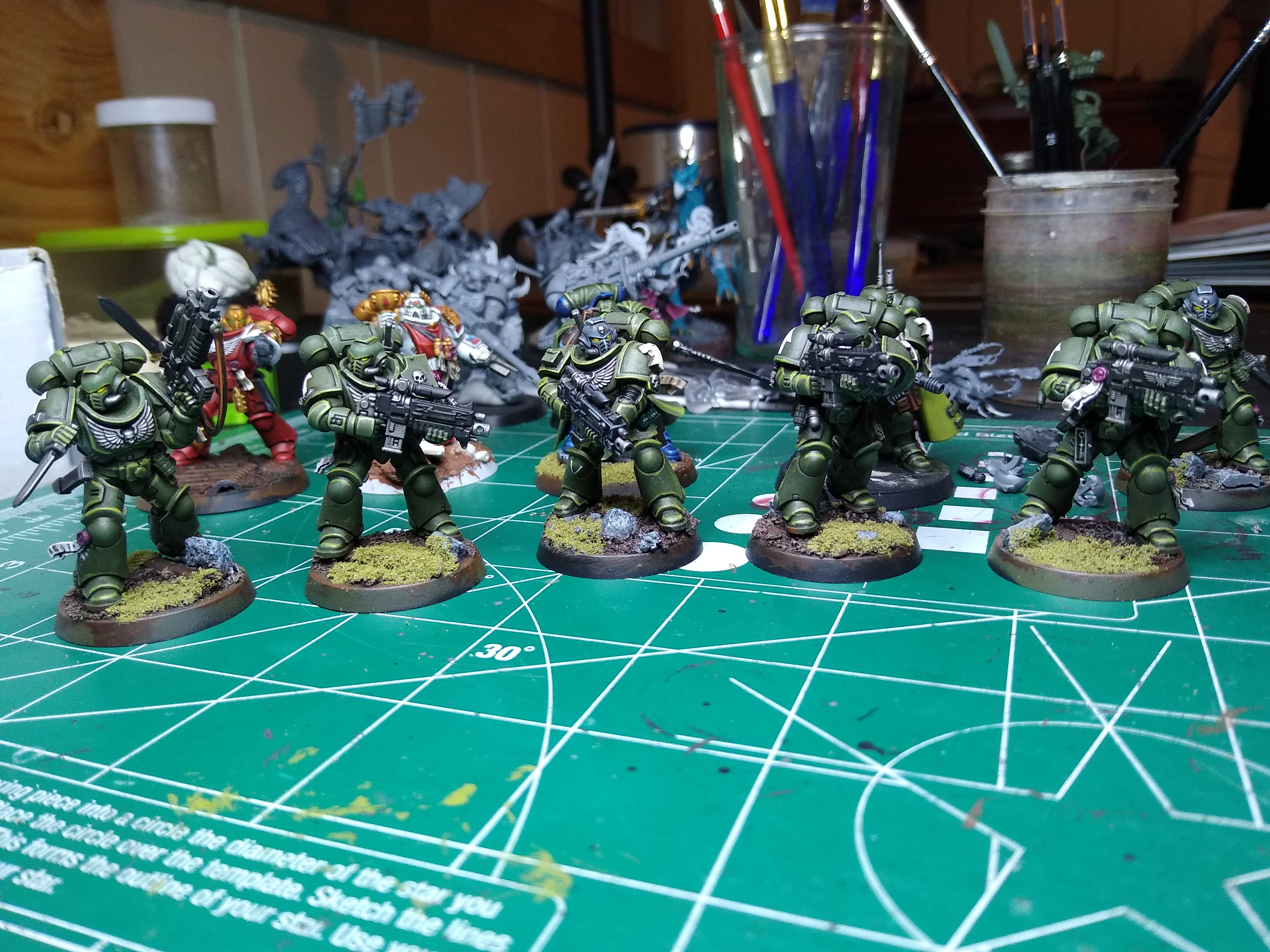 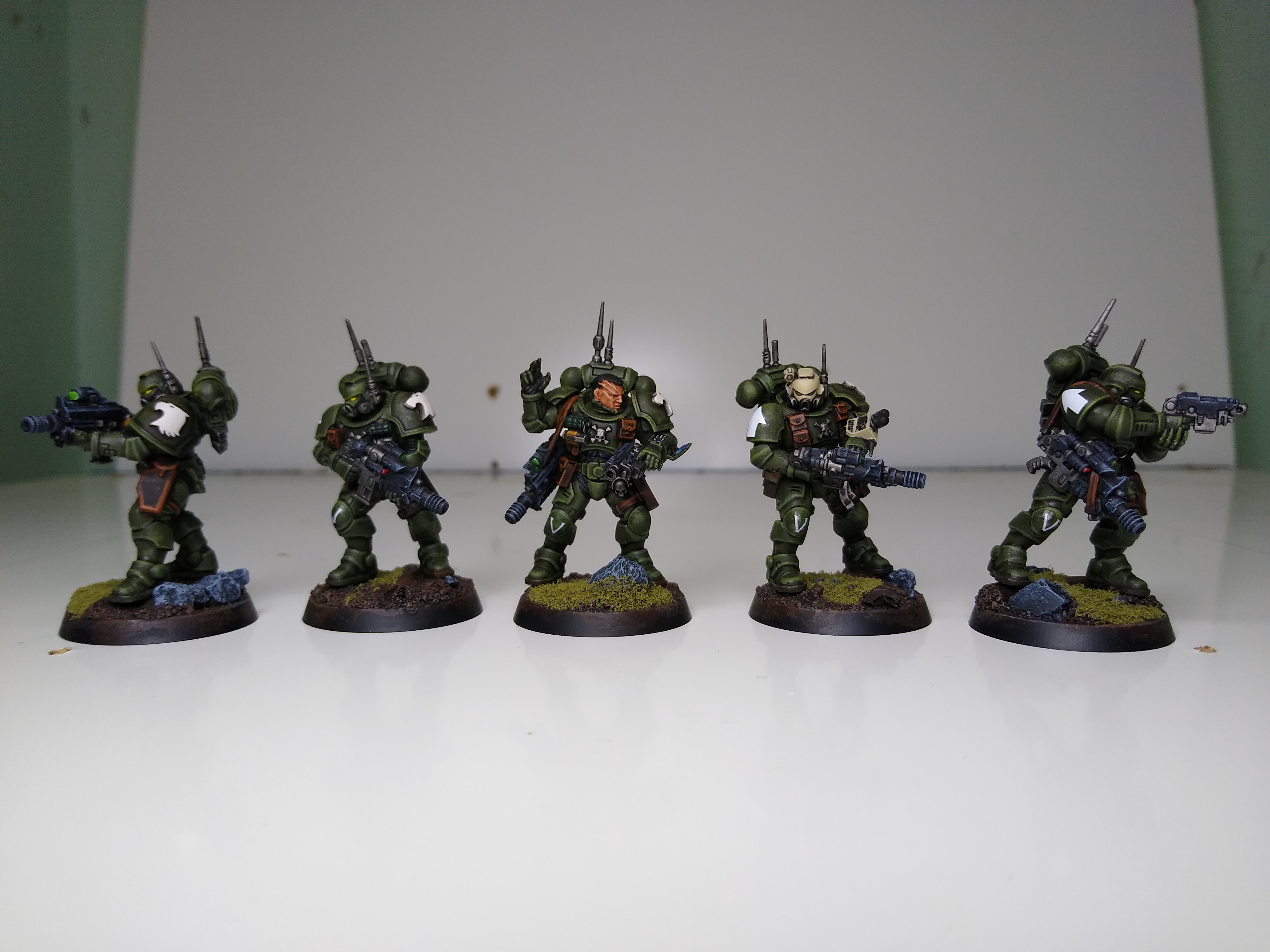 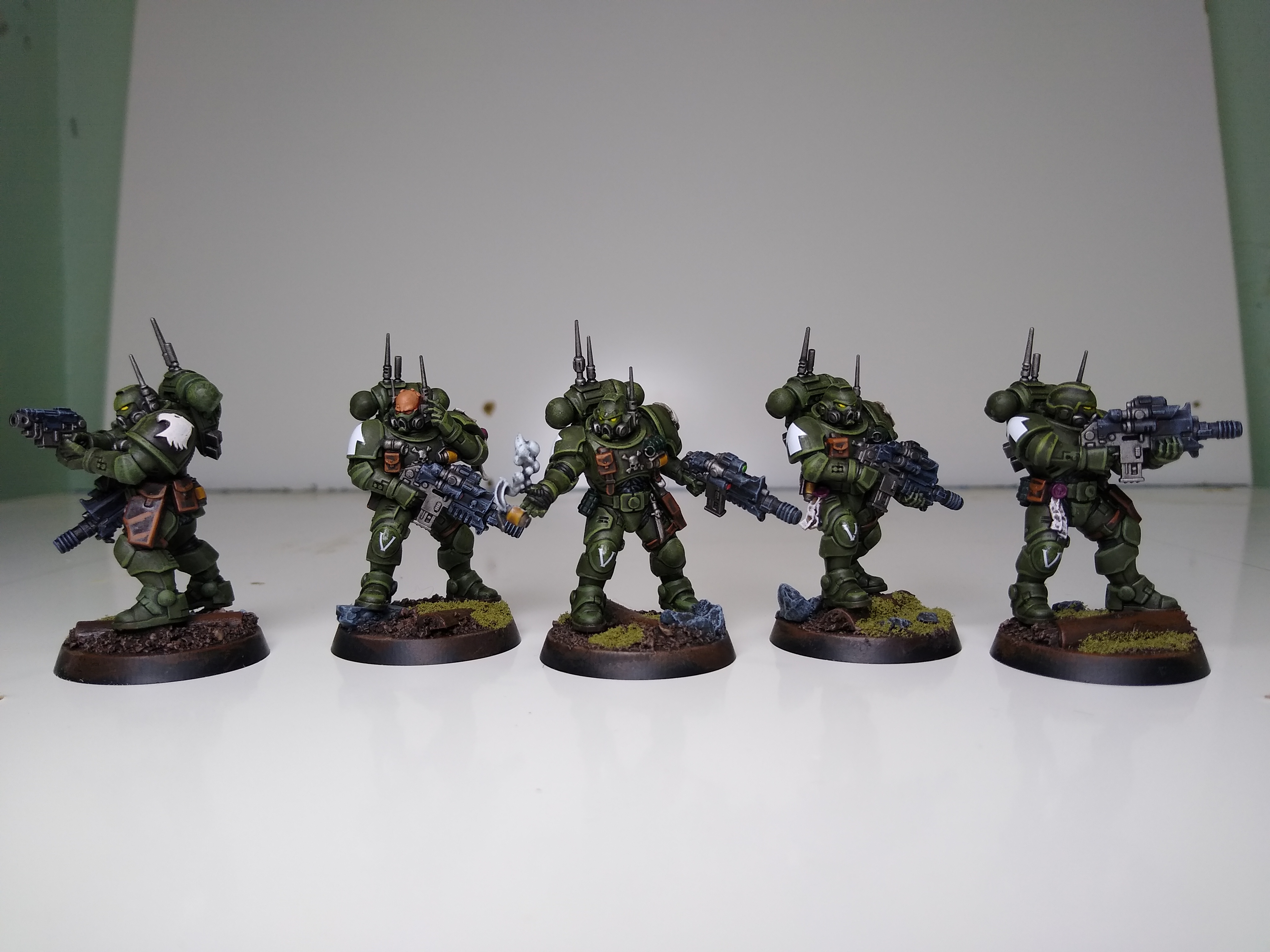 I've made some good progress, especially considering this has been a few years now, but I still have a ways to go. I'm still finishing up the rest of the Shadowspear box, and I'm hoping that one of the holiday box sets has phobos marines in it. Once I have those parts and an Invictor, I think I'll have all the models that I'll need, and it'll just be time to finish them all. Emperor give me strength!

You've done a sterling job with these fellows, I particularly like the Apothecary, the mix of off white and olive works very nicely. Similarly, the soft black of the sergeants' helms is well done.

I'll chime in as well.

The Ravenspire is the perfect place to showcase your Raptors. After all, they are the most well known successor of the Raven Guard. Excluding them would be like excluding the Crimson Fists in the Imperial Fists section.

I look forward to seeing more of them.

Thank you all for the kind words! Glad to know they stand up to scrutiny.

And also thank you for clarification on the posting guidelines. I had just noticed while making this thread that there was the "Forge" section of the website, and became unsure of where this log would ultimately be most appropriately posted. Good to know I wasn't too far off!

That's actually a really good observation about the lighting of these pictures. I'm mostly just using white surfaces and a maneuverable desk lamp to try and achieve these shots. I've been looking into light boxes to try and get better results, but I haven't pulled the trigger yet. Do you use anything like that? The pictures in your thread are very well lit.

Hah, you've got a good eye for this! Yea, I decided not to use the normal chest pieces for these guys, as they were a little too ostentatious for the look I was trying to achieve. But there's a pretty large gap behind those plates, so I had to bulk them up a bit. Some plasticard went into it, but then ultimately I decided that these guys would probably be carrying extra ammunition wherever they could store it, and what marine player doesn't have a million pouches lying around?

I wanted the centurions to look more like exoskeletons with weapons bolted on, rather than the oversized terminator look they kind of have. Sort of like the power exoskeletons from the film Edge of Tomorrow, just a way to allow a single marine to carry weapons way larger than would normally be man portable. So they'd form the heavy center to an infiltration fire team, sent along with a bunch of phobos armored Vanguard to a forward position weeks before a strike. And the centurions can carry well above what they actually have, so they are holding extra magazines for the marines they are with, as well as their own ammunition.

The community page has some good tips on getting decent photos
https://www.warhamme...ls-for-display/

My finishes models I do use a light box for I have the Foldio 1 & 2. If you're willing to invest in a light box I do highly recommend them
http://us.orangemonkie.com/

In the menahwile there are other tricks which can help. If you're using your phone you can still increase the brightness of the shot (usually there's a slider option when focusing to do this). If you do that and you have limited light you might want to prop the phone up on something and use the delayed trigger so the image won't be blurry due to the likely longer exposure time. Using a digital camera the principles are the same but probably easier to achieve.

So what's next on the painting table

Welcome To the Ravenspire

Welcome, very nice to see another join the Chapter. So one of the things we Raptor players always do is kitbash ourselves a Lias Issodon, where is yours? lol Seriously though, welcome and cant wait to see more of your progress.

A small update to this after an embarrassing amount of time, lockdown allowed me to finally finish up some of the other models I had earmarked for this project. I was also gifted a lightbox! Which promptly had problems due to odd colored bulbs, so thank the Emperor for sunny days.

First up, some Inceptors. I painted these guys not because I'm hurting for horde clearance, but simply because I base coated them with the rest of the Dark Imperium marines and then never finished them for years, and they deserve better than that. 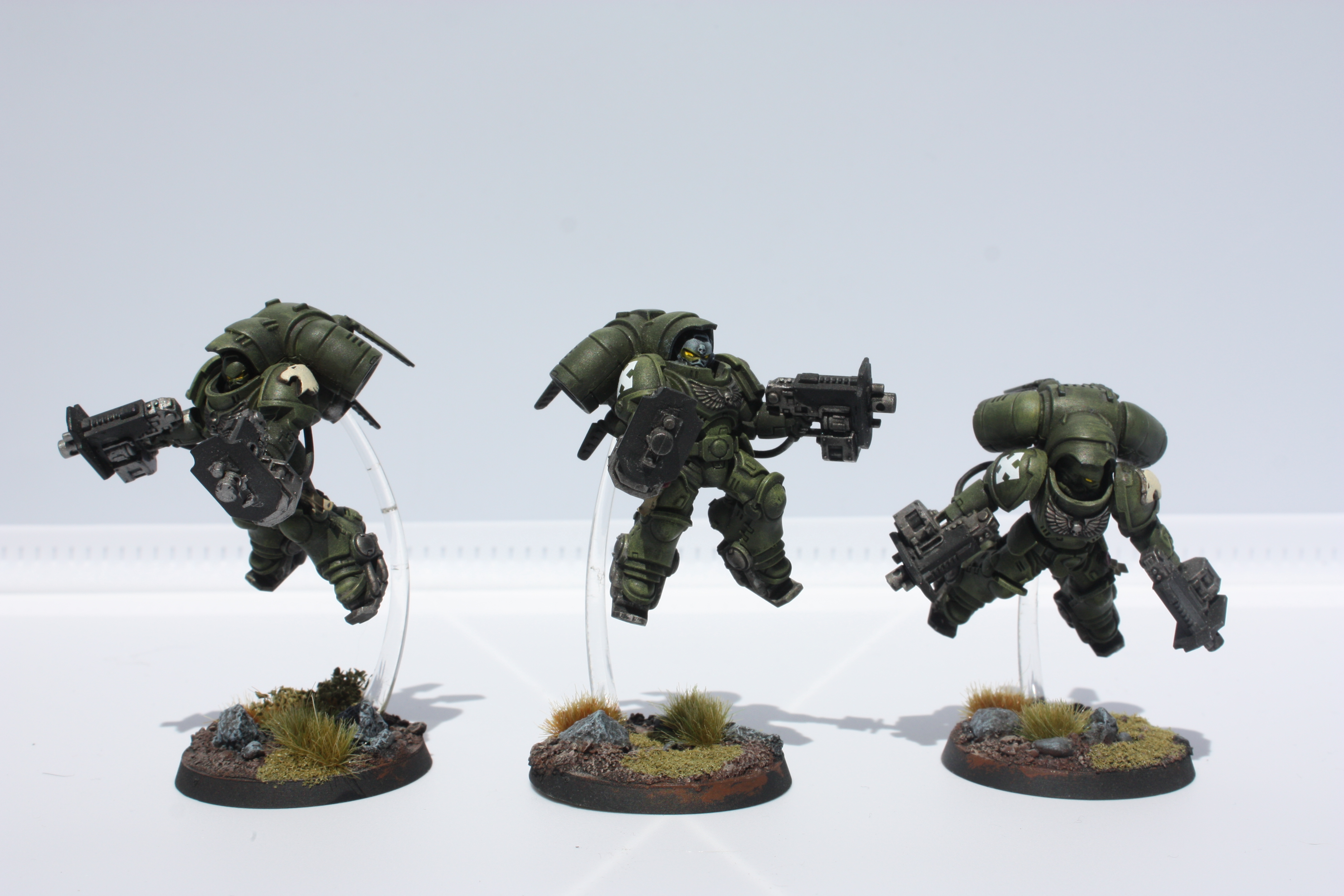 After that, I finally finished up the last unpainted bit of Shadowspear that would be used for my Raptors, everyone's favorite fighting fusiliers, Eliminators! 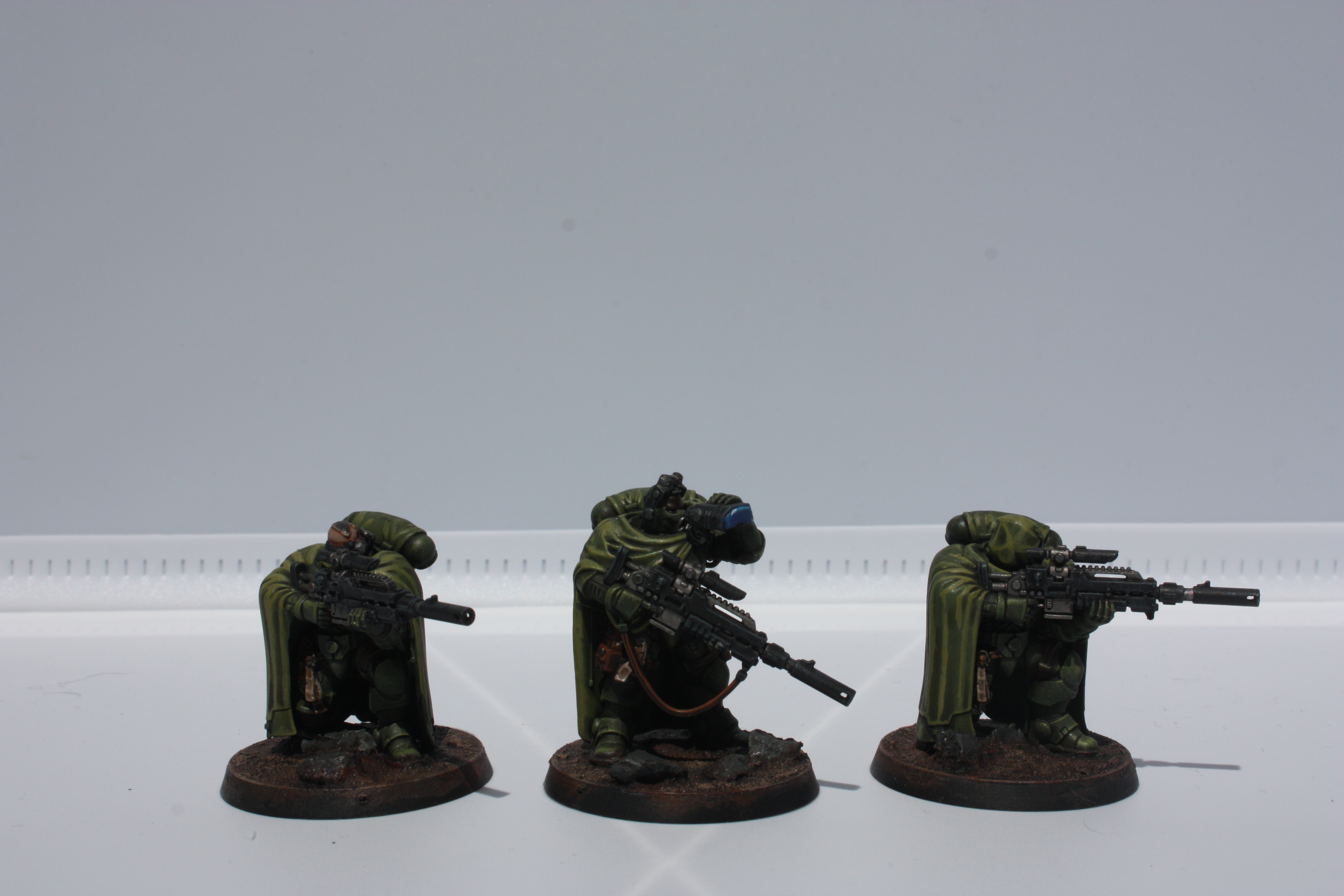 It was interesting, working on these guys provided a lot of motivation to keep going. It got me to finish painting up a serious portion of my backlog, including some other Raptors units I need to take pictures of, and another marine project. Finished models really are the best motivation. That and absurd character targeting rules.

Good job on the Inceptors.

Reasons to use the Steel Crusaders ('Codex: Space Marines' supplement) or the Iron-hearted Angels ('Codex: Blood Angels' supplement): Because you think giving Sternguard Veterans a heavy bolter wtih special issue HEAVY BOLTER ammunition is ALMOST as much fun as shoehorning an Earthshaker cannon into a Land Raider.
Back to + RAVEN GUARD +

Also tagged with one or more of these keywords: Project Log, Painting, Conversions, Raptors