Seeing as the new primaris and primaris characters models, and even SoB models, are using old art for the basis. I do not have any old art, however I know some of you grey beard do. So if you can post any old art, it may give us hints to what models we may get.

If you want your army paint scheme made in Impcat just send me a message.

Well, if we're going to go for a trip down memory lane, we might as well start at the beginning: 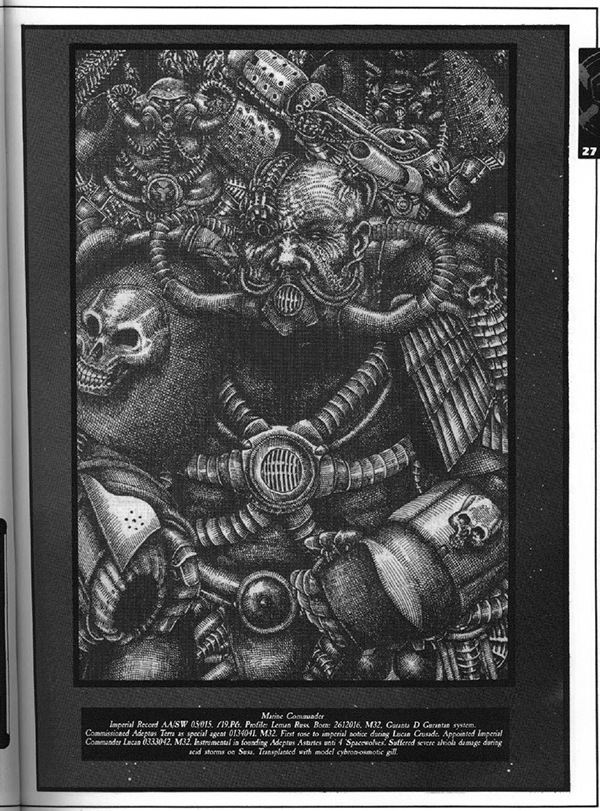 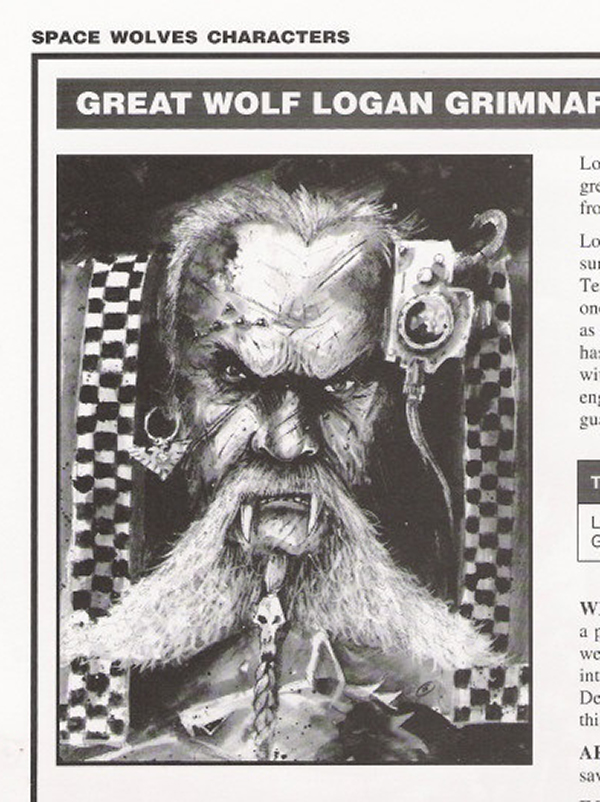 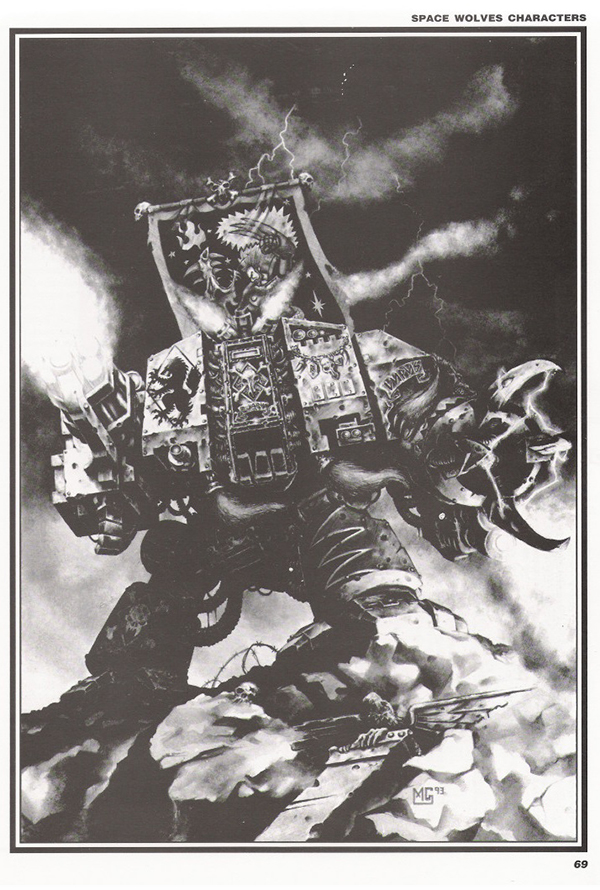 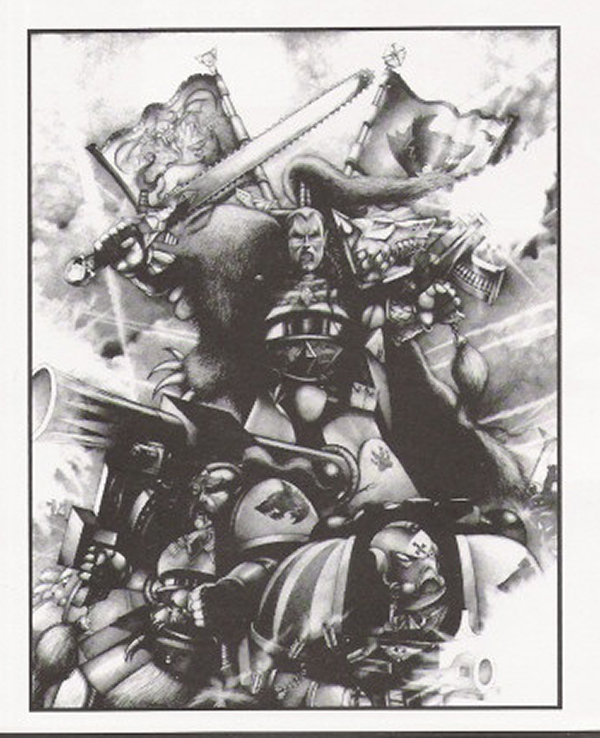 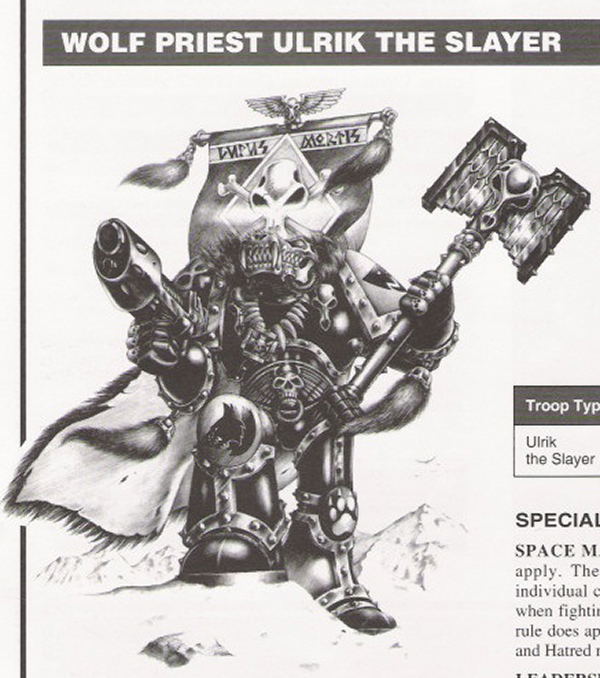 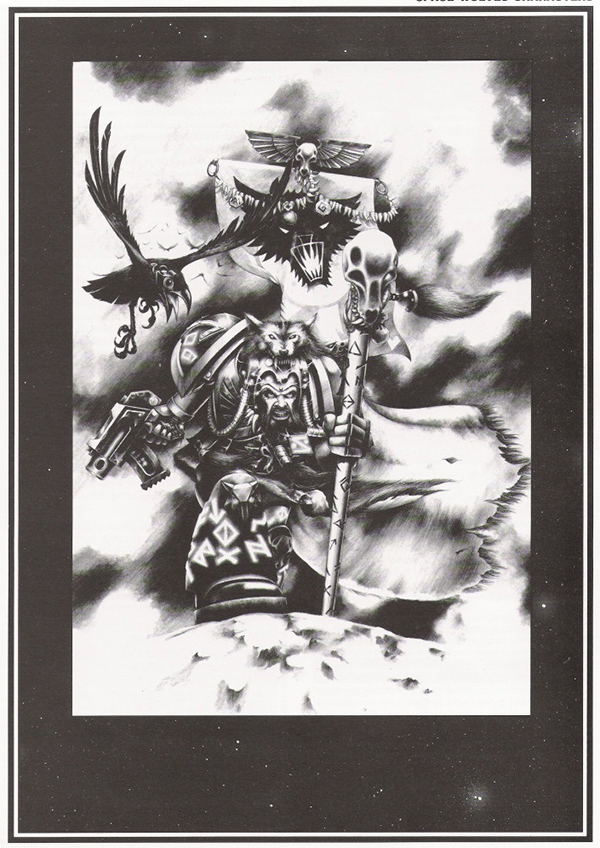 Might be worth taking a look at some of the relatively more recent stuff from the 3rd ed codex, as well, and for that matter the subsequent Eye of Terror codex Wolf-related material.

The 3rd Edition 'Dex was pretty thin in terms of artwork, but it did feature Logan, Ragnar and Ulrik: 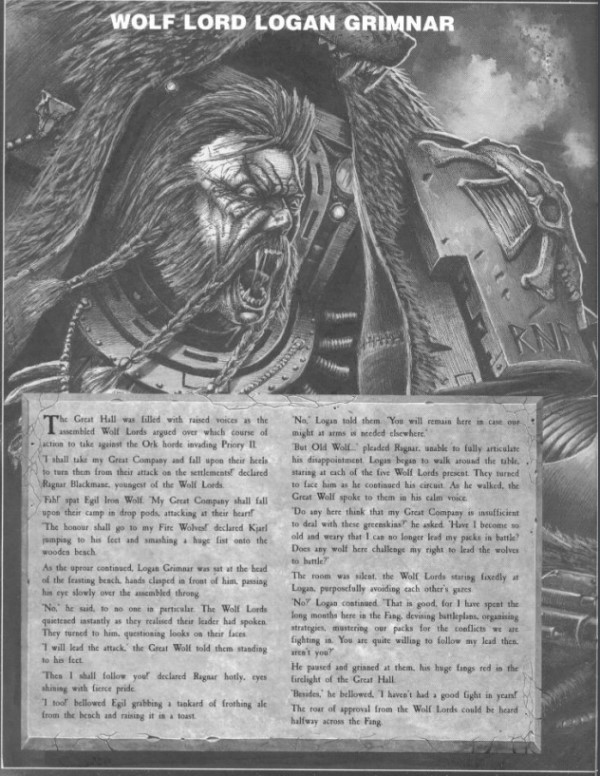 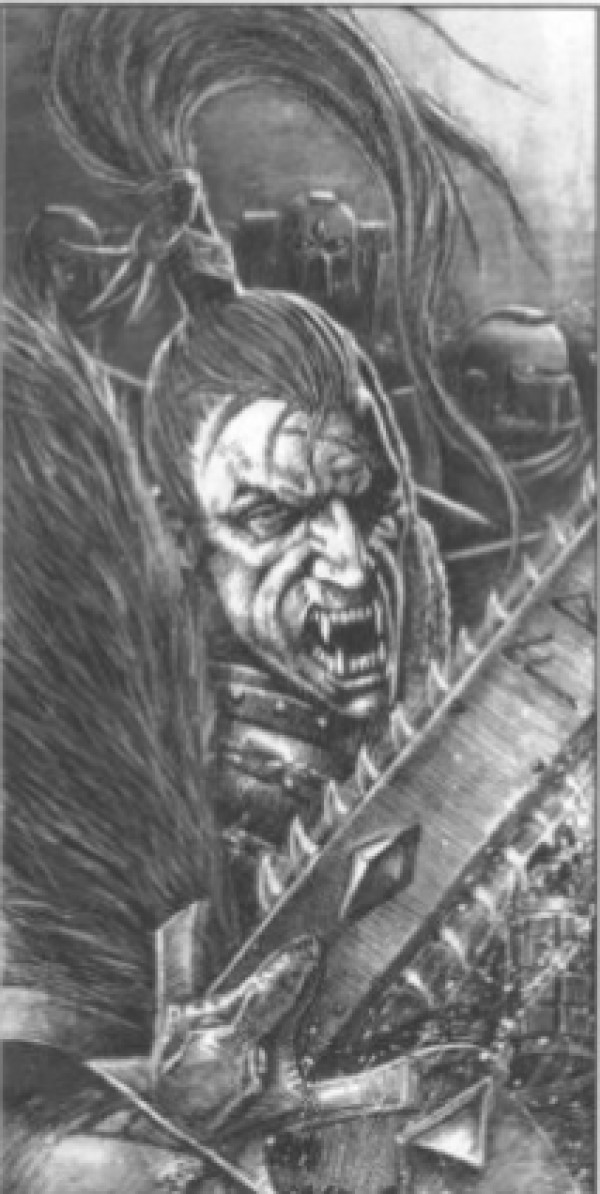 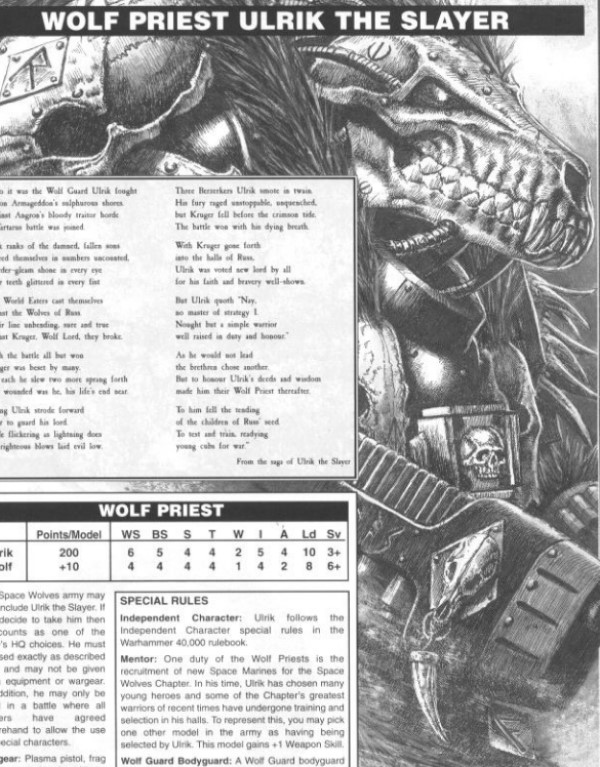 Just outside the frame of the picture is an ork leaping over the fray with a big choppa’ but Ragnar knows he’s coming and doesn’t even have to look to shoot him out of the air. Instead he maintains eye-contact with the warboss to show dominance and holds up his frost sword so the warboss can see it’s bigger than his powerklaw.

"By the River fettered Fenrir will lie till draws nigh the doom of the Gods." - Frey, Lokasenna: 41

Oh, I wasn't specifically thinking characters; or, for that matter, characters which actually have/had miniatures at the time. There's a rather excellent piece that I *think* was supposed to be Bran Redmaw - although it was a bit strange, because the insignia for the Marines around him was the Spirit Wolf. Also a few other pieces - which while I'm not sure they'd be likely to see models, were nevertheless really nice, like the wolf priest with the wolf-skin over his head and shoulders. Might have been some Wolf Scout art, too, now that I think about it. The 3rd Ed codex cover has also definitely played a role in conditioning what little we've seen of Primaris Wolf kits - the battle leader with the axe and boltrifle has a few design elements that are either direct lifts from it [like the diamond on the chest-plate], or more loosely inspired by same.

There were also an array of unit art pictures , which *looked* like they'd been re-cycled from the 2nd ed period.

The EoT codex, I'm almost sure I remember Wulfen art being a thing - although as those have been re-done, both art-work and model wise, relatively recently, it's perhaps not of great probative value. [unless for some odd reason we got primaris wulfen - which, while it'd be a great way to go back towards the more armoured-marine-gone-savage aesthetic, rather than ... Hugh Jackman Meets Dr Moreau, would nevertheless both be incredibly unlikely and fluff questionable; although at the same time, there might be something in the aesthetic that could be used] I also suppose even if there *were* grey slayer art to be found, taht the aesthetic of a mish-mash of different armour mks and scavenged gear wouldn't be ideal for the shiny new Mk.X (further) (far) future we're presently in.

The Rune Priest that got done alongside that release, though, is an excellent miniature, with a nice pose, and quite solid 'wolfy' touches in both armament and other accouterments. I could easily see a Primaris style reinterpretation/update of that miniature being not only rather easy to do, but also well received. In fact, dangit, I'm now rather tempted to take a shot at doing just that ...

For space wolves I actually hope that use the newer art from 7th. It really is amazing.

I have a soft spot for the 2nd Ed artwork since that is when I started playing..

But the 3rd Ed actually had some decent ones too.

Surely Ragnar will get a new model at some point? he must be the oldest model in the whole range by now? That is what I am most interest into seeing actually. A new, dynamic Ragnar, maybe as a Primaris, leaping at the Epmeror´s enemies..

I do like the old model however, even how static it is..

"Harden your soul against decadence. But do not despise it, for the soft appearance of the decadent may be deceptive. One need only consider the Harlequin dancers of the Eldar to see the truth of this proposition."