Something in the 1pm update in https://www.warhamme...omepage-post-1/

It says "Each book will be accompanied by an epic champion to lead the charge in this terrible age". Seeming as the Rumour engine that had the winged picture pretty much looks like its for us, as it matches the new fliers aesthetic, minus the spikes.  Could we be getting a jump pack captain for Admech?

Could be. The combat character we have all been waiting for.

To create a sort-of track record for PA under the following assumptions:

-Inquisition is done with the WD article, Sororitas with their new codex

-chaos demons are in some other chaos book 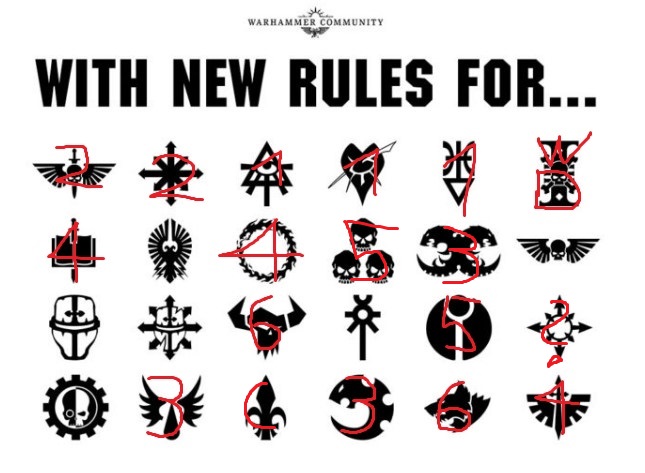 Assumptions of GSC and Chaos Demons are wobbly, getting it back up to 8, meaning there's probably around 3 books left after the named 6 ones.

This is pure speculation of course, but at least hints on several still unnamed books.

There was also the rumour engine pic that might be a piece of Blackstone.

I hadn’t considered that the small wings might belong to a character. Especially a Skitarii Commander. I’m not sure about that idea on the commander but a character is an interesting idea.

I expect the Blackstone piece will be an anti-psi techpriest and the wings a new unit. I think the flyer shows GW have been listening though and we’ve been asking for a Skitarius Army commander almost as much as we asked for transports and a flyer so i wouldn’t be surprised if we get that too. With the long rifle too I think we’ve got a wave coming (presumably with the Manipulus solo release too).

But an important part of the PA speculation.. the Warhammer Community article said the Archaeopter was coming early in 2020 so that’s soon.

Which means that our PA book will be coming in 1-4 months wouldn’t it?

Whether the small wings from the rumor engine belong to infantry unit or infantry character/commander - there's no way to tell. The blackstone scepter thingy probably belongs to a techpriest, since I don't see expendable skitarii fielding such experimental/controversial tech.

"In the new year" could mean next year in general, but I'm not sure if the wording means a more specific time in english. It would make sense to synch a new release wave to the PA book (especially as those are also accompanied by one character model each), but the currently known books extend until March, making April the first possible slot.

Hopefully it will coincide with a Manipulus separate release too. I am not buying that box unless Rustalkers become God Tier. But then if thats the case having two HQs released becomes less likely.

Not sure if I want a HQ or some elite Birdpriests?

I think the stone thing might be AoS Lizards rather than Ad Mech. Come on, we are oldschool, but we dont swing sticks with stone tips around...

Other than that I hope the wings are not for a Skitarii HQ. Skitarii are to squishi to be Smash Captains and I want my Alpha Primus more like a force multiplier rather than an independ operating killer machine. But thats just me

I think the stone thing might be AoS Lizards rather than Ad Mech. Come on, we are oldschool, but we dont swing sticks with stone tips around...

Other than that I hope the wings are not for a Skitarii HQ. Skitarii are to squishi to be Smash Captains and I want my Alpha Primus more like a force multiplier rather than an independ operating killer machine. But thats just me

Whilst I agree, the idea of the bird-man being done up in a 1950s or earlier sci-fi rocket man sort of getup (as per Vanguard as they are now, I suppose) is really rather endearing to me.

On the Skitarii Commander front, I'd actually be quite happy if the force-multiplier format came in the form of an upgrade/expansion on the Sydonian or Onager format.

A Sydonian Commander has a faintly preposterous feel I'm quite fond of, whilst an Onager Commander would have me very excited - especially if Ad Mech were allowed to form vehicle squadrons with their skitarii vehicles!

Due to the nature of the Dominus, Datasmith, and Manipulus rules presently, a further infantry commander would be interesting, but I'm not sure what they'd bring that those others aren't. (Nor that would be fruitful to have alongside Skitarii, that wouldn't have to be artificially prevented from benefiting Electropriests or Robots.)

Which itself reminds me - I wouldn't mind seeing an electropriest character either. X-Men's Storm, but now with bat-wings and 100% more electoos?

I am of course a very great fool - Larsen van der Grauss is a lectro-maester, which I suppose makes him and his lacklustre rules an electropriest character, ish. If he got decent lectro-rules, we might be getting somewhere. (Similarly, Daedolosus has the look of someone who's been a Skitarii Commander, but got promoted to Explorator. [In the same way too-much-successful-initiative Astra Militarum & Imperial Navy commanders might get promoted to be Rogue Traders...?])

I think we're going to get a flying Sicarian in the Fast Attack or HQ slot. Doubt it will be in Psychic Awakening. I think it's going to be a separate thing.

Thinking about it, there is no Cult Mech Fast Attack choice at the moment.

Just a note on the symbols, the "Inquisiton" one is most certainly Death Watch.

Just a note on the symbols, the "Inquisiton" one is most certainly Death Watch.

That would make lore sense but they can pretty much fit into any xenos fight.

Ah, good catch. I thought it was the Inquisition. And GSC are not in book 3 as far as leaks go.

IMO DW would make most sense against GSC or Orks.

Tau are already fighting DG at the Startide Nexus, which is too far out of imperial space to have any imperial presence.

Necrons are probably fighting AdMech over Blackstone, to contain the rift again. I don't see how AdMech would enlist the help of an inquisitorial chamber militant, since they want to go after xenos material and tech.

Orks are probably lead by Ghazkull ("The Beast"), which would warrant DW attempts to kill him - the DW was formed during the War of the Beast after all.

GSC are the good old Overkill enemies, fit for some covert operations.

Remember the Deathwatch weild Necron blades with Mechanicus designs on the hilt.

So the Deathwatch has already made peace with the idea of utilising Xenia tech once appropriately Inperialised. So I think they’ll be on-board with Cawl’s plan for Blackstone.

It's the inquisition (and Ordo Xenos nonetheless), so I doubt it - while one inquisitor might find it okay, the next will find it heretical. AdMech and Deathwatch have already come to blows over necron tech.

And as I've said, there are more fitting enemies for Deathwatch on the list, and (with IK) more fitting allies for AdMech in their quest for blackstone - Forgebane 2.0.