So recently I've started to notice that I become a lot more motivated to paint when I have deadlines to meet or a goal in mind, so to that end, I've decided to start cataloguing my work on here as a sort of self-help method to clear my backlog and get my painting moving!

I'm currently working on an all-primaris version of the vaunted 4th Company of the Crimson Fists during the Indomitus Crusade. The Crimson Lancers, which was the old company of Captain Alessio Cortez before his disappearance. I have a lot purchased, but as mentioned, not much painted, so it's time to make a start. I love to convert and add a narrative and story to the models I paint so expect a little bit of fan-fiction if I post a model I'm particularly happy with.

First up is two five-man intercessor squads and a minor converted Lieutenant, who I have yet to name. I'm hoping to extend these to ten-man squads which will form the core of my battle line. Looking to get these finished in the next few days, Dorn willing. I'm trying to make these dudes as fluffy as possible, with the correct transfers and insignia too. The bare-headed sergeant was my first time sculpting hair with green stuff, as the head was originally shaven.

Anyway, would love to hear any thoughts on these, hope to be back with more updates soon.

"There is only the Emperor, he is our shield and protector!" 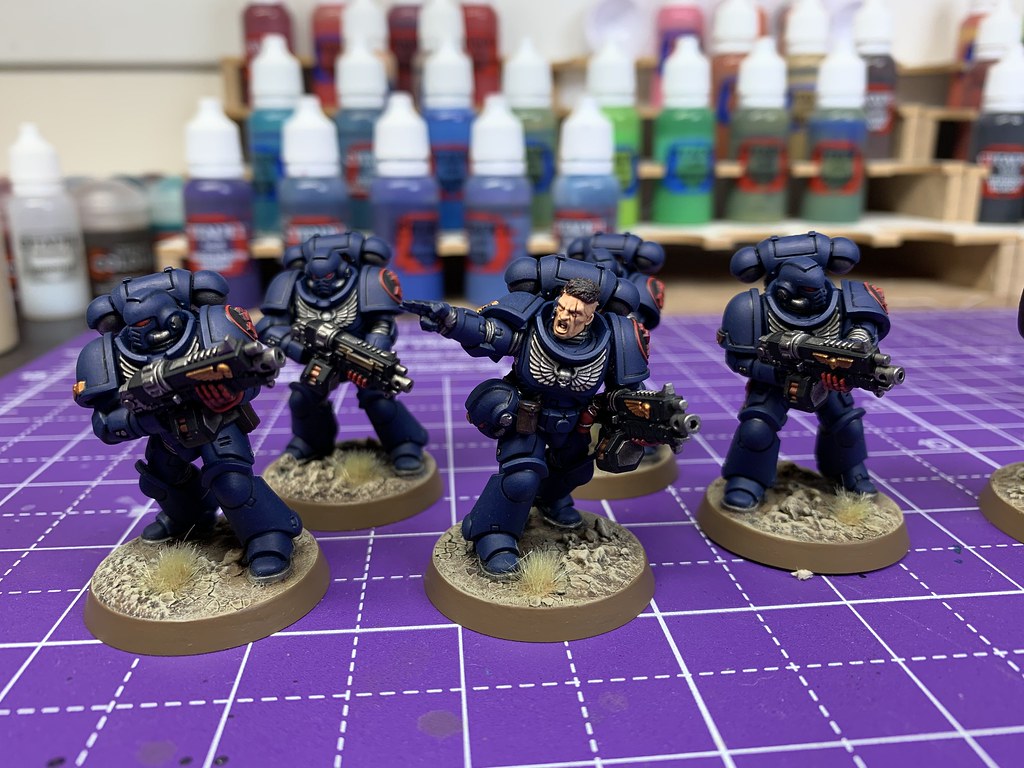 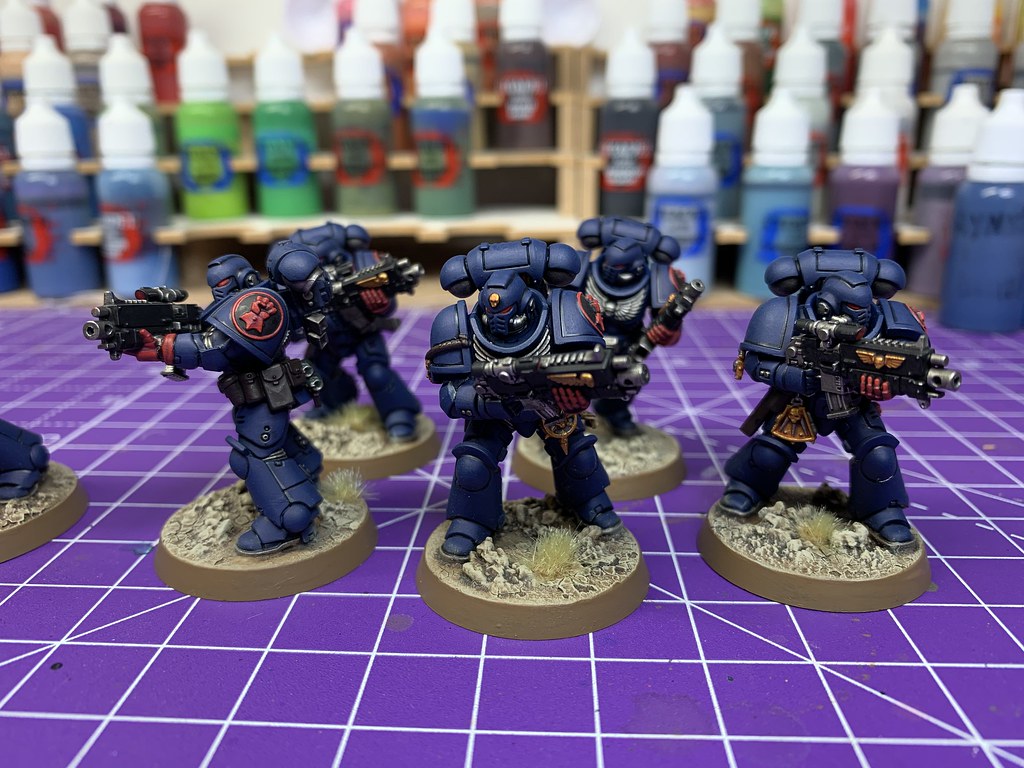 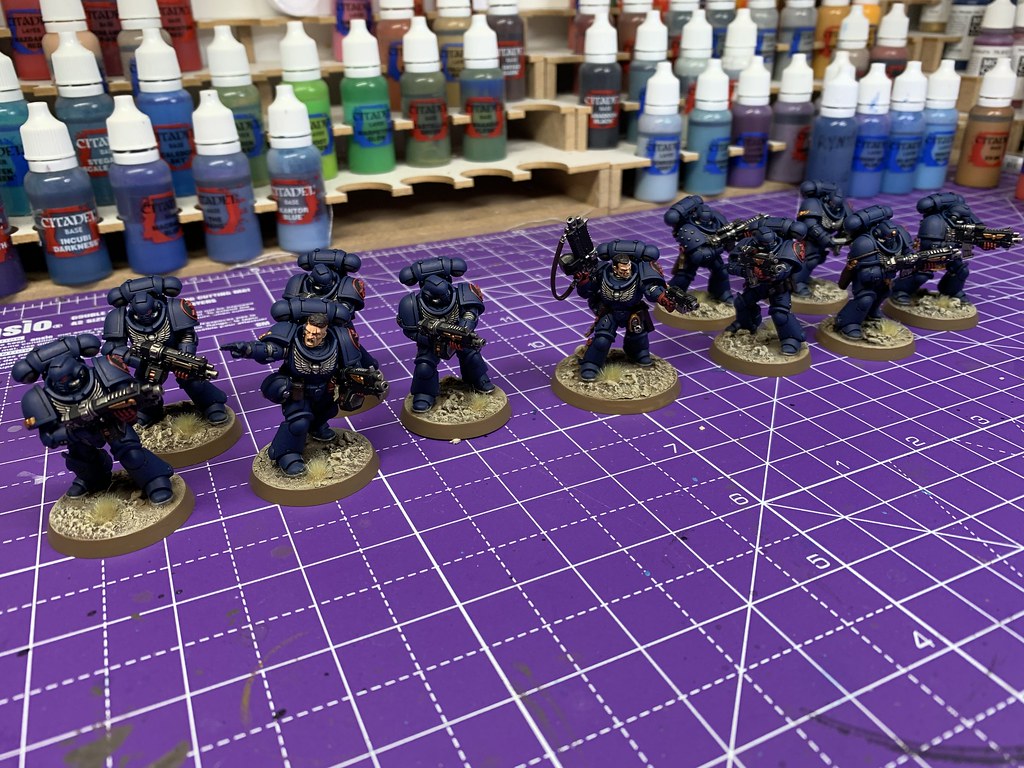 Cheers guys! Still some work to go on them, mainly highlights and transfers!

Made some good progress tonight!

Nearly finished the lieutenant and made headway on one of the sergeants. Both still need some clean up, a little bit of weathering on the transfers and a coat of matt varnish, but these can all wait until i've finished both squads. 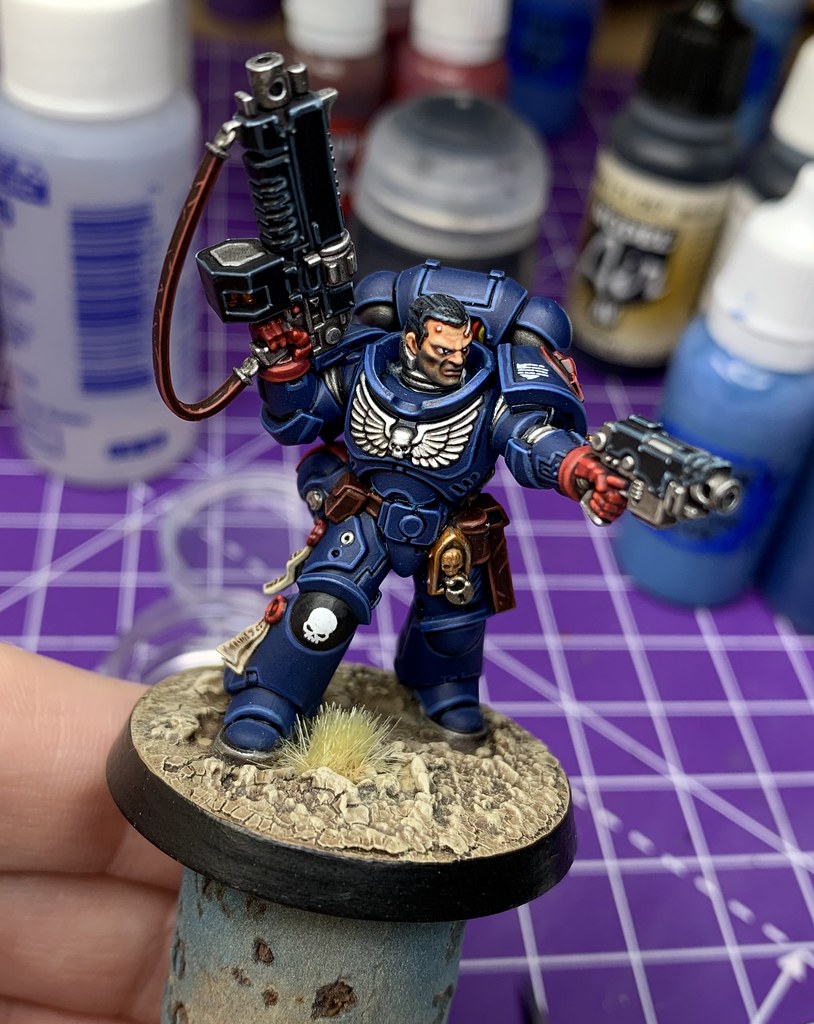 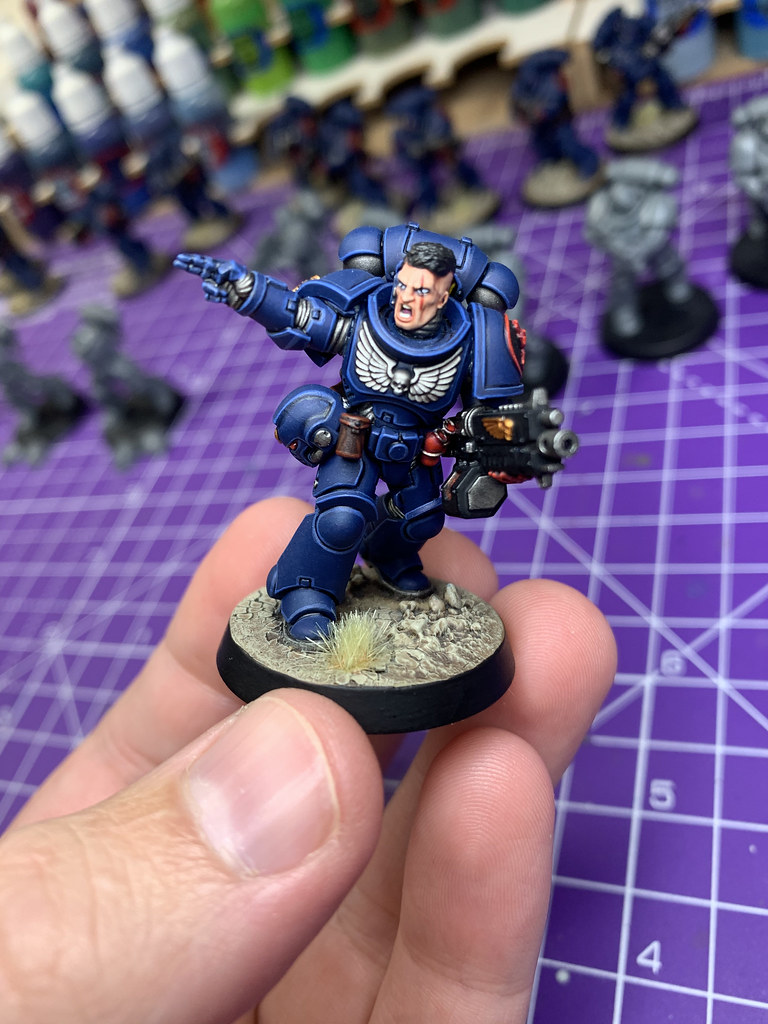 Beautiful paint job on these marines!

These are great, a full army like this will look amazing. Keep going!

Thanks so much to everyone who's commented so far. Finding this all super motivating. Managed to get a fair bit more done tonight.

Some more highlight work on the 3rd squad, just some minor clean up to do, quick matt varnish and then move onto 2nd squad. I managed to get all the transfers on both squads too.

The last image is under a lightbox I got given by a family friend and wanted to try out, but i'm not sure on how the picture came out to be honest. I prefer the pictures on my phone under my painting lights. Maybe I need to fix the lighting in it or add extra I don't know. Is that how light boxes are meant to look? I'm no photographer so any help there would be great.

Anyway! Hope you all enjoy these as much as i'm enjoying painting them! 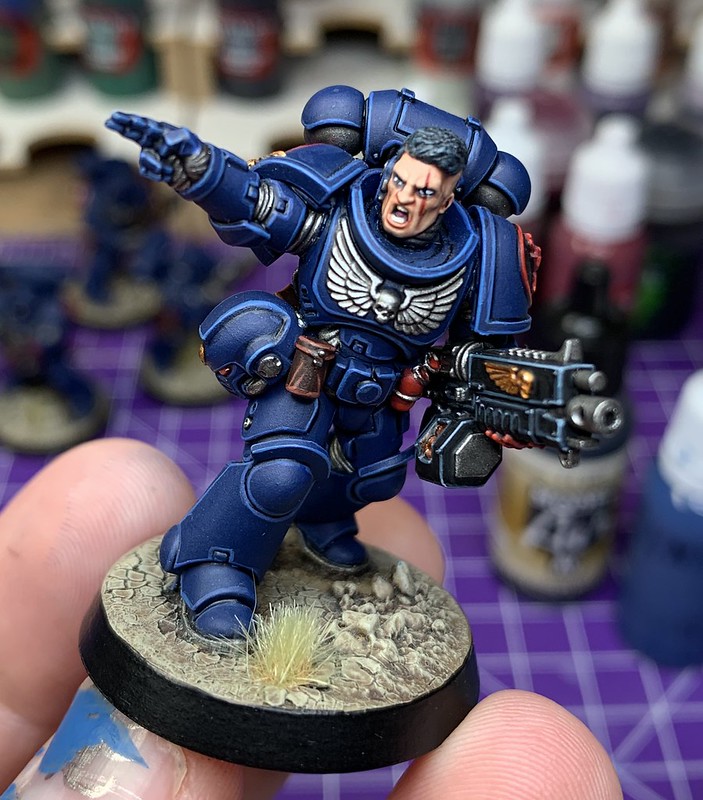 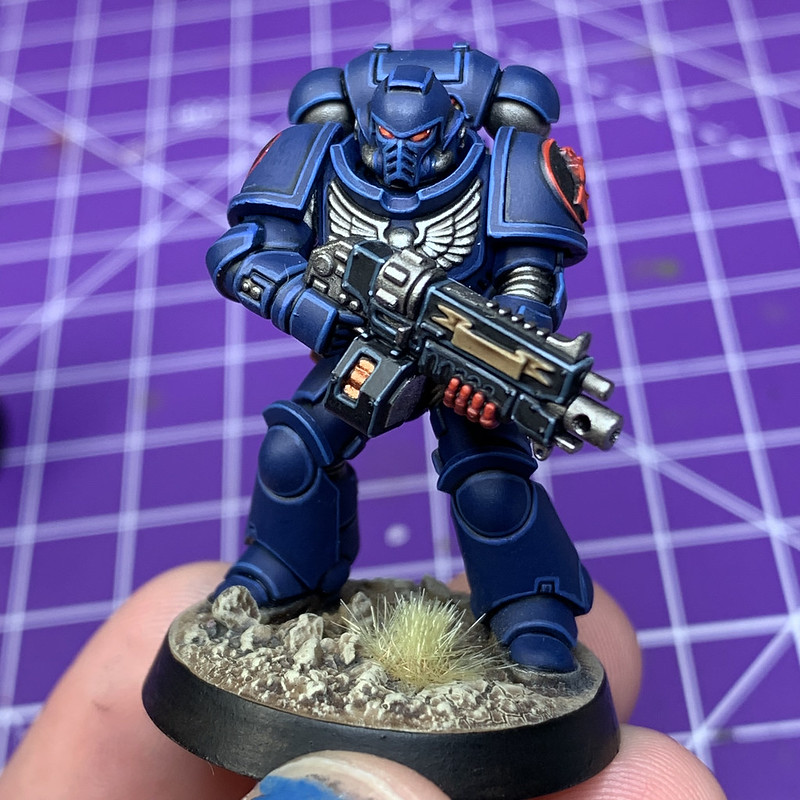 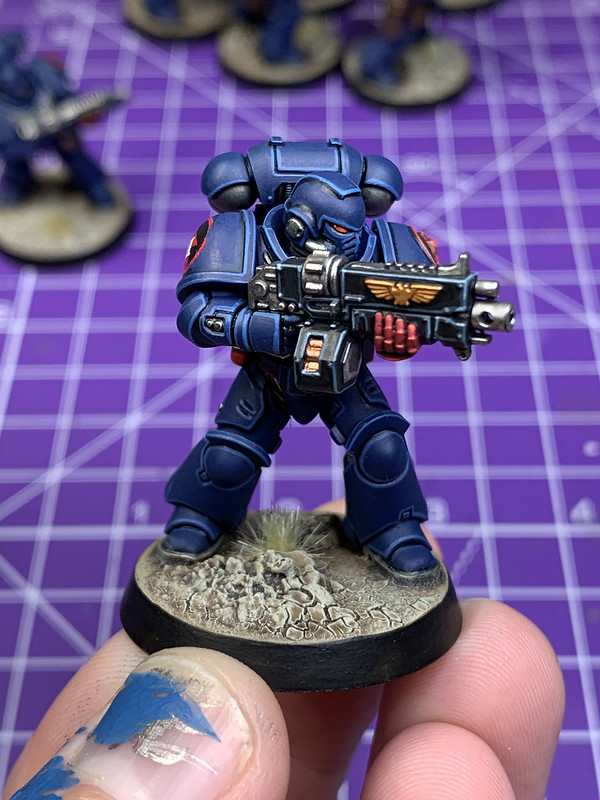 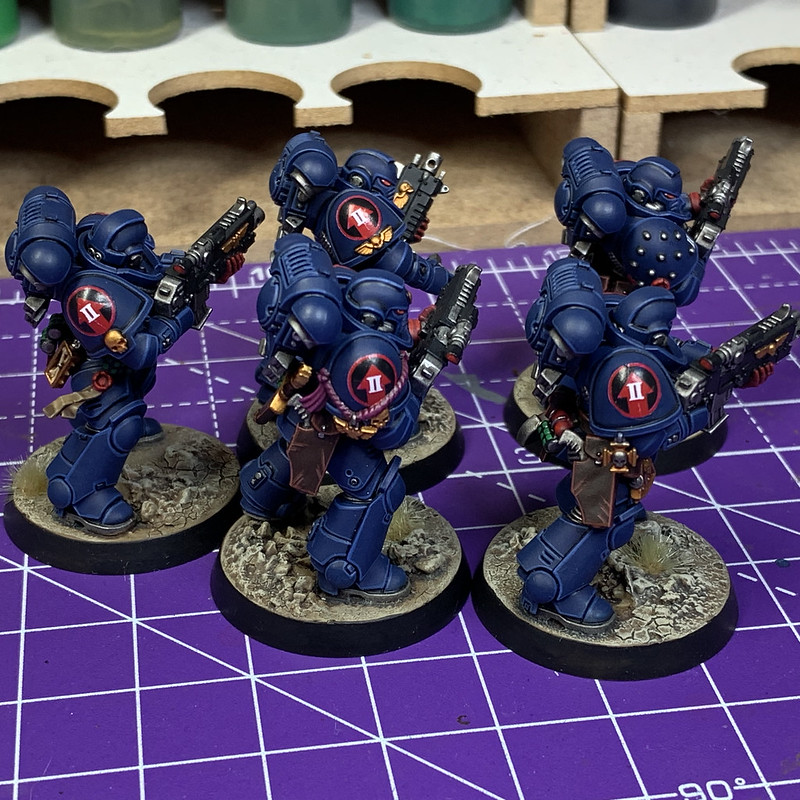 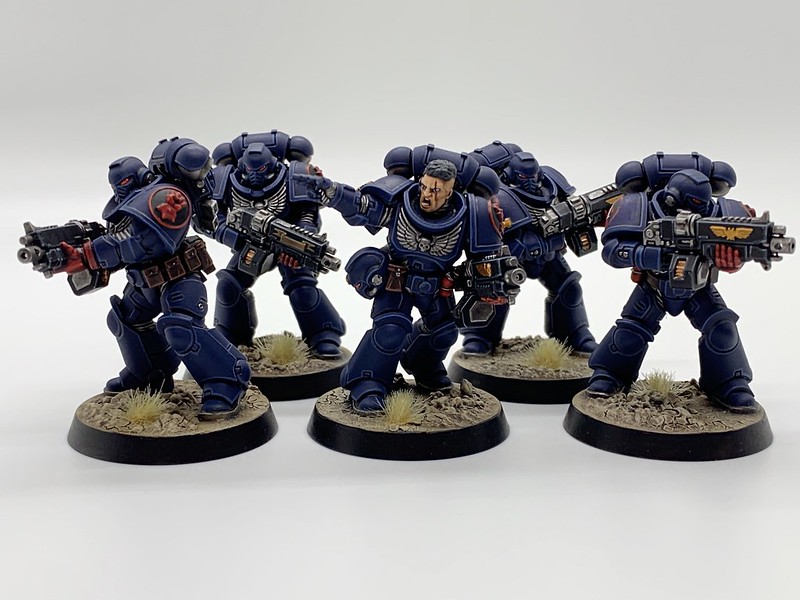 Hey these look really great! What paint colors are you using. Also I like your transfers for the squad markings. Did you make those yourself or purchase them?

Hey these look really great! What paint colors are you using. Also I like your transfers for the squad markings. Did you make those yourself or purchase them?

Cheers! My recipe for the power armour is this:

- Arbrush with Rynns World Blue. (My own recipe. 2 parts VMC Deep Prussian Blue, 1 part GW Kantor Blue, and just a touch of VMA Signal Blue. I have this pre-mixed in a bottle already in ratios of 10mil, 5mil and 1ml respectively.)

The rest of the stuff is pretty simple GW recipes. Although on the metallics I use the Vallejo Metal Colour range as they're amazing and go on super thing but cover well.

The squad marking transfers are from this guy. Super nice dude, really helpful and really quick to ship stuff out! Can't recommend him enough to be honest. He even did me a free small sheet with various names and lettering on that I sent to him.

Hope that helps mate. Any other questions let me know!

Finally managed to get battleline squads II, III and the lieutenant finished over the christmas period, had to wait on some matte varnish to arrive before I could call them finished. Haven't been completely unproductive though, managed to make a start on five more marines for each squad, to round out both to ten. Should hopefully have these done soon. In hindsight I wish I had given the squad leaders melee weapons, as I'm building this army with the intention of playing tabletop for the first time since the early 2000's. However you live and you learn, I guess it's a few points I can spend elsewhere!

Trying my hand at some minor lore for the squads below... 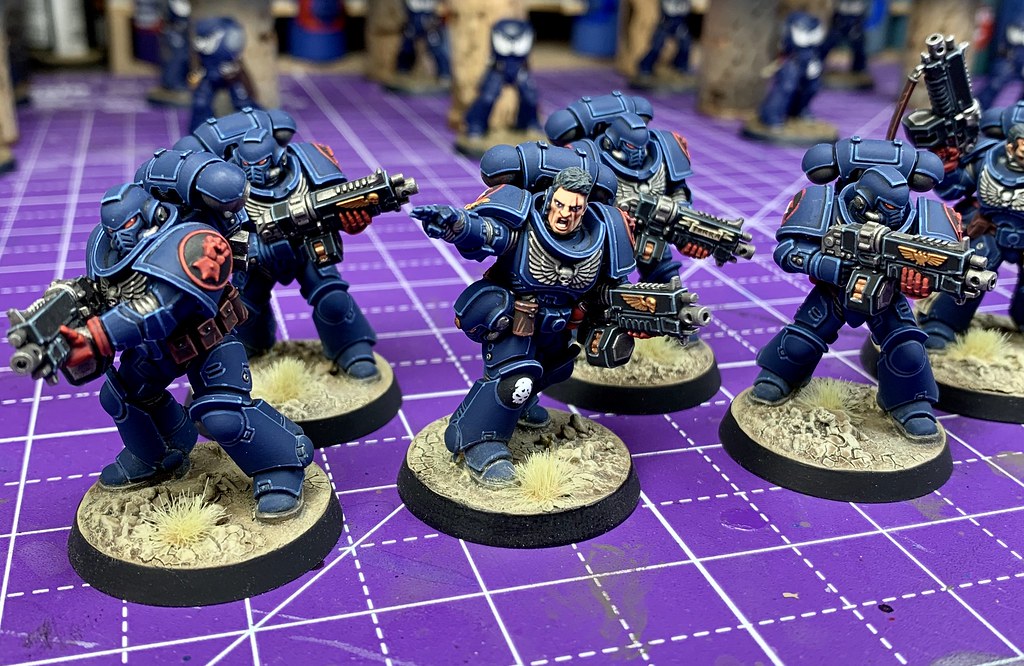 Battleline Squad III. Designation: Torres. Led by the newly promoted Sergeant Ceval Torres, after the death of the squads previous commander to the vile forces of Chaos during the short-lived campaign on Endimion VI. The newly acquired burden of command lies heavily on the comparatively young marines shoulders. However, he is eager to prove his worth to company and chapter, noted for leading the remnants of his squad in multiple daring frontal assaults during the campaign where they lost their previous sergeant, auto-bolt rifles spitting out unrelenting fury upon the forces of the Arch-Enemy. 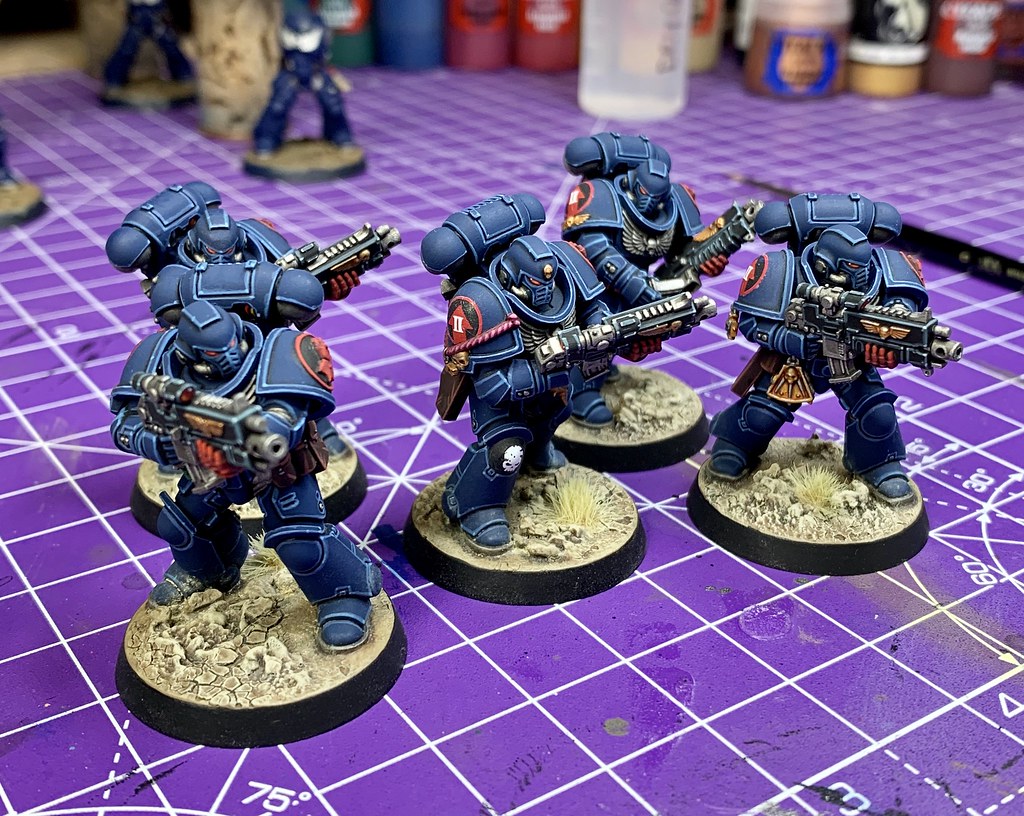 Battleline Squad II. Designation: Savales. Squad Savales is commanded by the ever-dependable Juno Savales, a true scion of Dorn. Consitantly able to hold the line against the most furious of assaults by enemy forces, whilst keeping up a withering pace of fire and giving cover to the companies advancing battle-brothers. Many a battle plan composed by Captain Isidore Haleous has been formed around the linchpin of Squad Savales holding a barricade or strongpoint and providing an anvil upon which to smash any opposition. 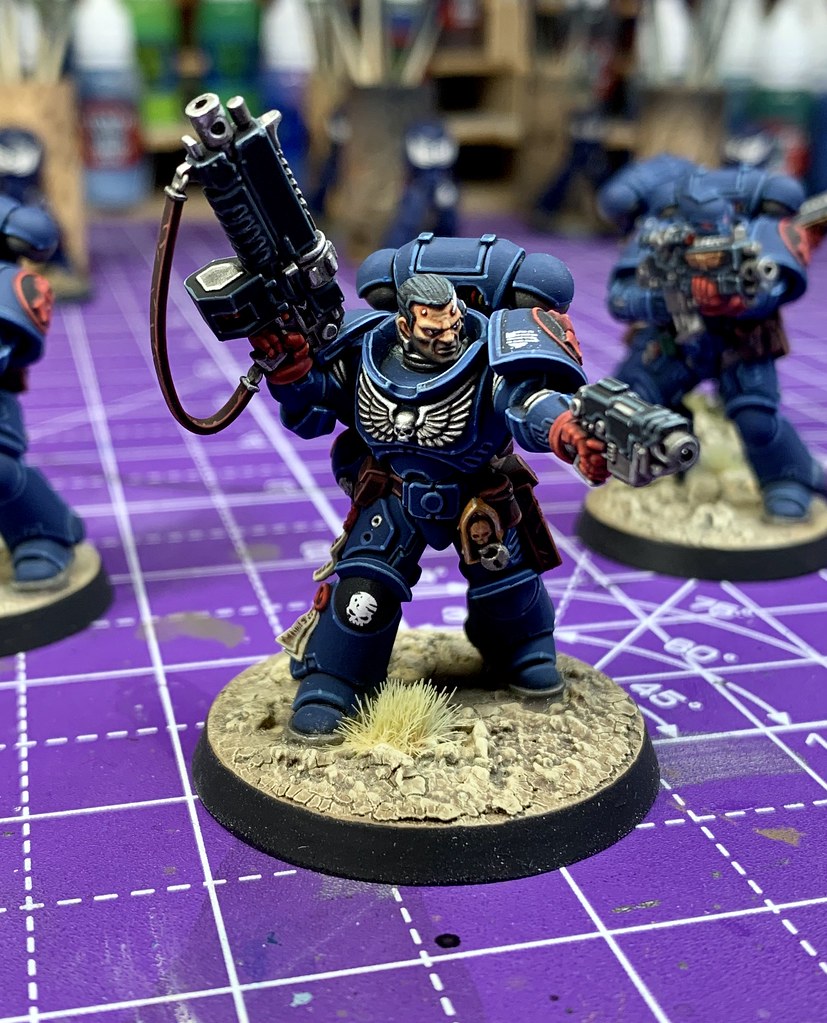 2nd Lieutenant Antorus Alvor was counted amongst the first shipment of Primaris recruits to the Chapter from Lord Commander Roboute Guilliman, fighting alongside his "Unnumbered Sons" for many years before being presented to Chapter Master Kantor upon the Indomitus Crusades arrival to Rynn's World.

A veteran commander, much loved by his fellow marines. Many a member of the 4th Company has quietly joked (although certainly never to his face) that there was some kind of Adminstratum error and he was destined for the Imperial Fists upon his release from Guilliman's Greyshields, his dour nature being much more fitting to their cousins in that most severe of Chapters. However, despite how quiet and taciturn he may be, Alvor remains an exemplary member of company command, being a brother Captain Haleous can depend upon in the most trying of engagements. 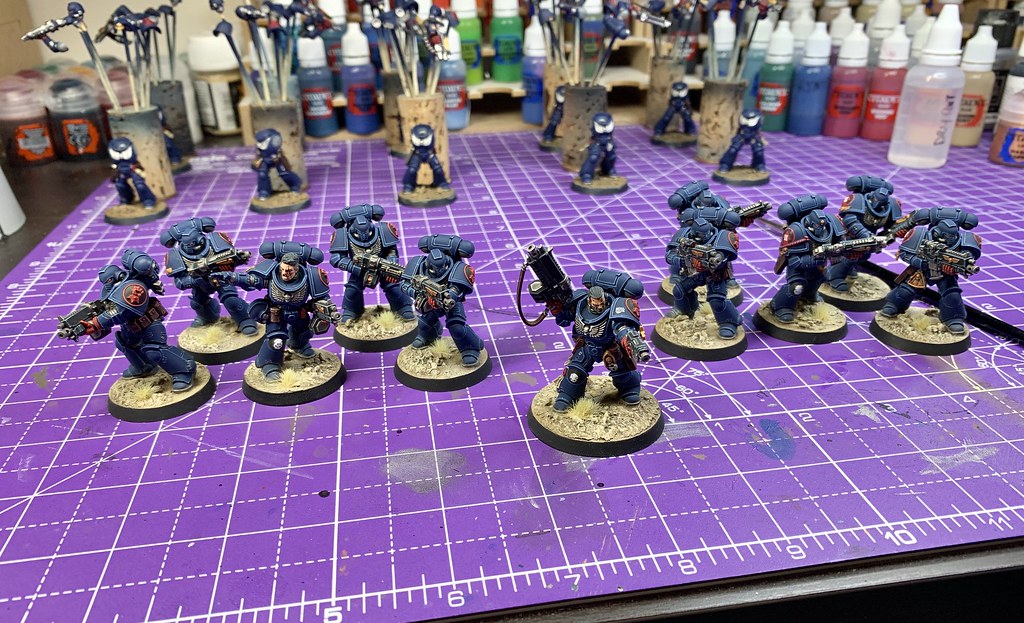 I was going to move onto a ten man squad of stalker equipped intercessors after the reinforcements for those squads, so I had a squad for every variant of bolt rifle, but I think I'll need a break from intercessors for a minute, so I've decided to semi-true-scale a five man sternguard squad out of the deathwatch kill-team and a box of sternguard veterans. As much as I like the scale of primaris, I still hold a special place in my heart for the older marines, and hopefully the Deathwatch legs won't look tiny compared to their taller brothers.

Also, I love the idea of a squad of veterans seconded to the various companies in order to aid and educate the newer generation of Astartes in the chapters culture and the proper arts of war, fitting to the sons of Dorn. Maybe each squad leader could be assigned to one of the veterans as a sort of tutor? I don't know, just playing with lore ideas at the moment. Hopefully it works out, might have to bust out some green stuff and shave off some of the Deathwatch symbols, we'll see. 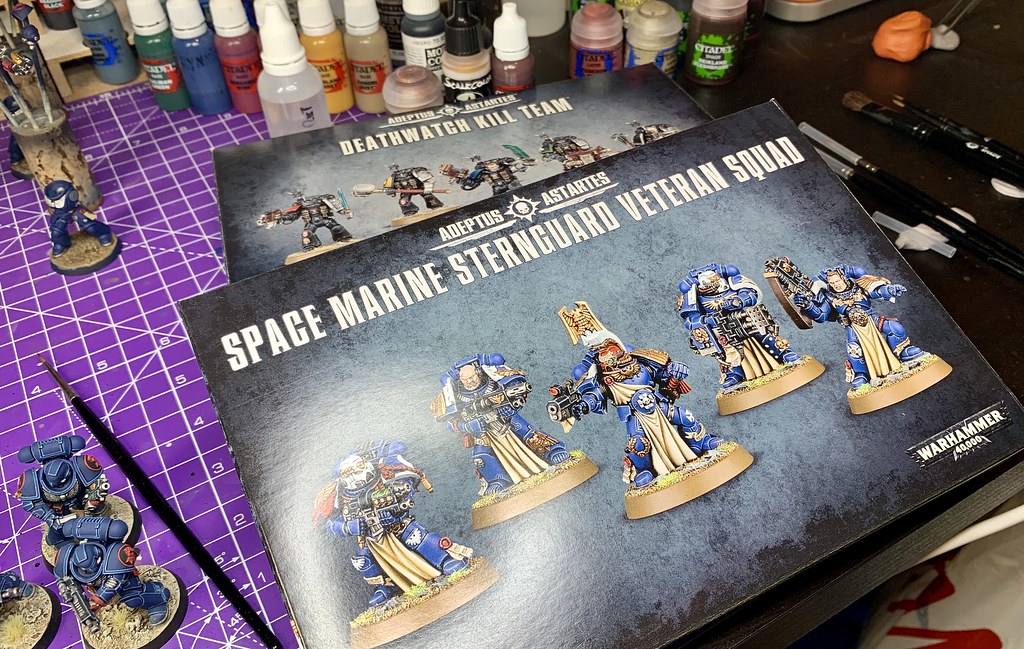 Anyway, hope everyone here had a great Christmas and is looking forward to an even better new year. See you all in 2020! Cheers! 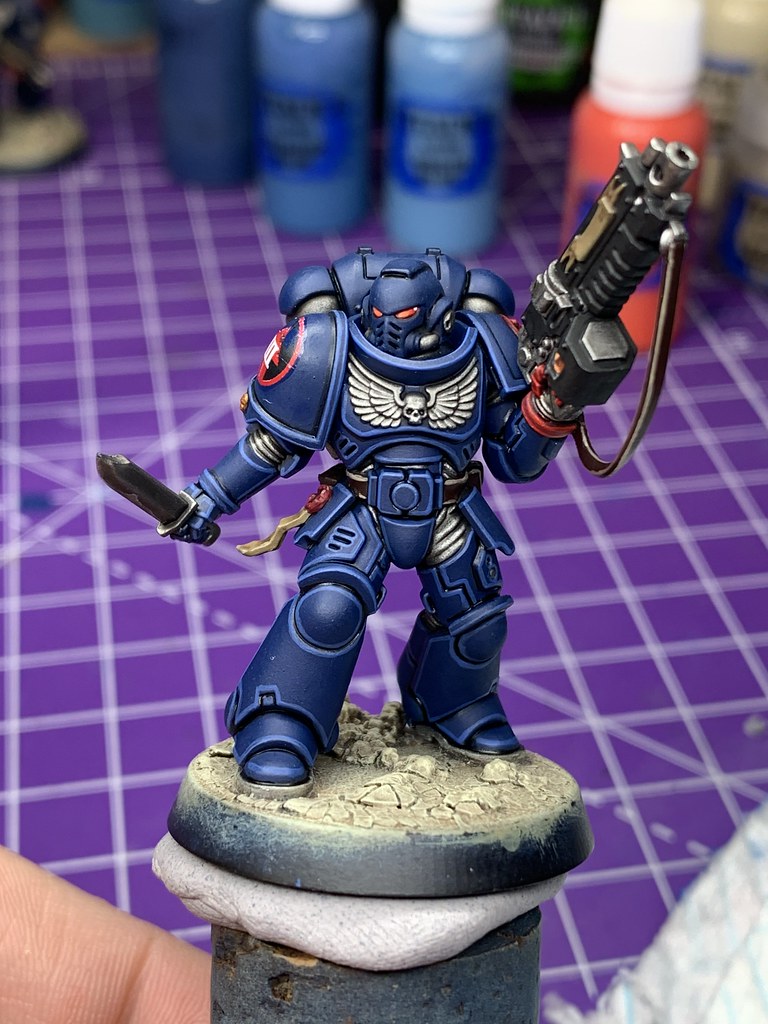 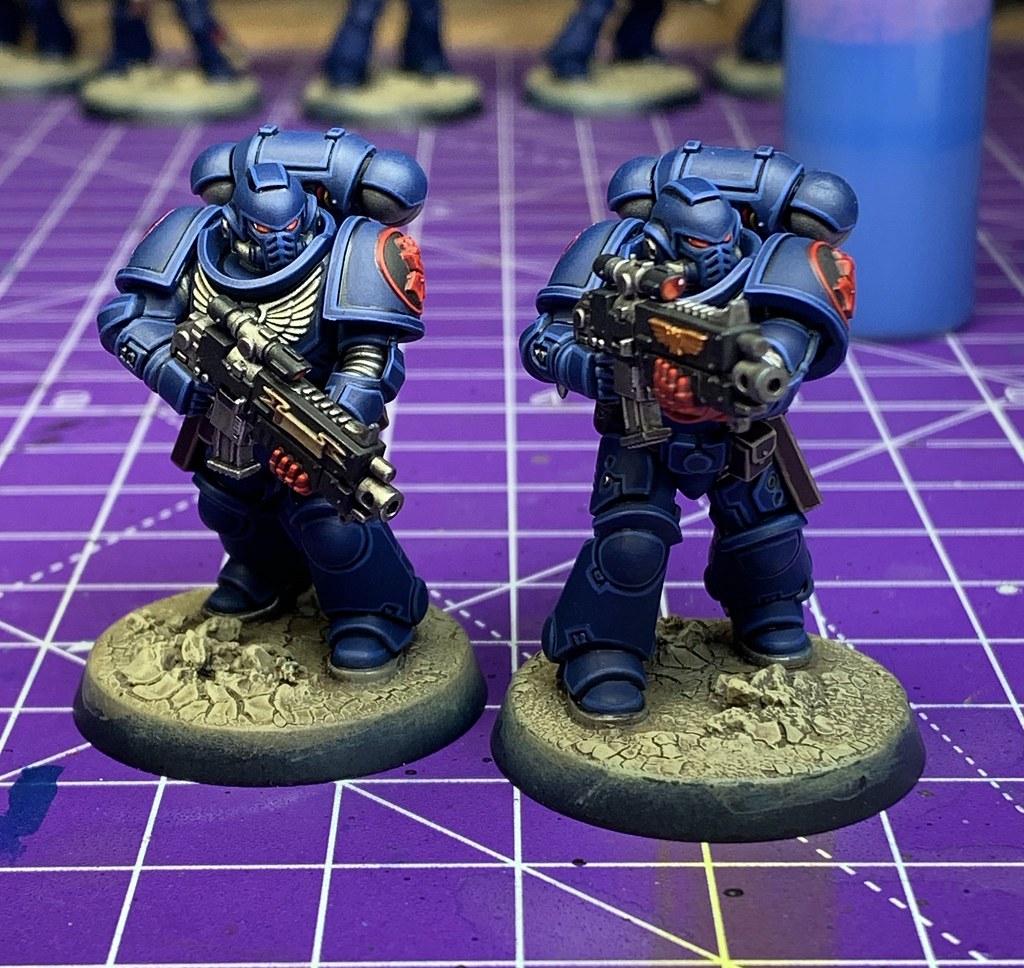 Making progress on the reinforcements for Squads II & III. Hopefully have these guys finished in the next few days.

I was trying to think of what to add to a couple of the marines to mark them out as a squad leader if I decide to combat squad them in a game. My sergeants get a gold skull on their helmet and a skull on a black field on their kneepads, so something along those lines maybe, any ideas?

I've also scrapped the idea of true-scaling some sternguard with the deathwatch kit. I tried it briefly and the kits still look so small next to the primaris, and it would take a lot of greenstuff work to get them looking good. In their place I'm going to work on a veteran intercessor squad using the sternguard boltguns as "counts as" auto bolt rifles to give them a bit of extra pop. Maybe some nice shoulder-pads and some cool MKIV helmets sprinkled in.

Hopefully be back soon with some more progress!

Those turned out really nice!!

Those are excellent, really clean and well done.

Fantastic work on these guys, speaking as a long time Crimson Fists fan you have really done them justice.

Thanks for the kind words everyone!

Just got the bolters to highlight now and then a varnish and they're done. Hopefully have some more updates soon.

Also tagged with one or more of these keywords: Primaris, Crimson Fists, Space Marines, Indomitus Crusade