90 replies to this topic

So I have been working for 3 or 4 years on my Blood Angels army. As I'm a very slow painter, this project is not finish at all, but I'm still going to show you the "few" thing already done.

I don't remenber why I have started painting the 5th compagny and not another one. Maybe because the single black drop on the red shoulder pad look better than a white/yellow/ green one.

Very precise painting! And lovely bases as well. Dynamic poses of the 1st SQUAD are very thematic.
As a fellow 5th companeer, I'm keeping my fingers crossed for you. Do you plan on adding Primaris in accordance with the DoB and BoB lore?

Let's start with the first tactical squad and their razorback. 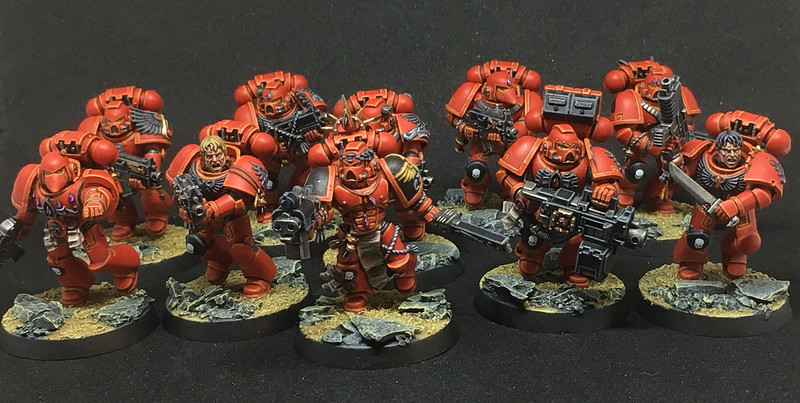 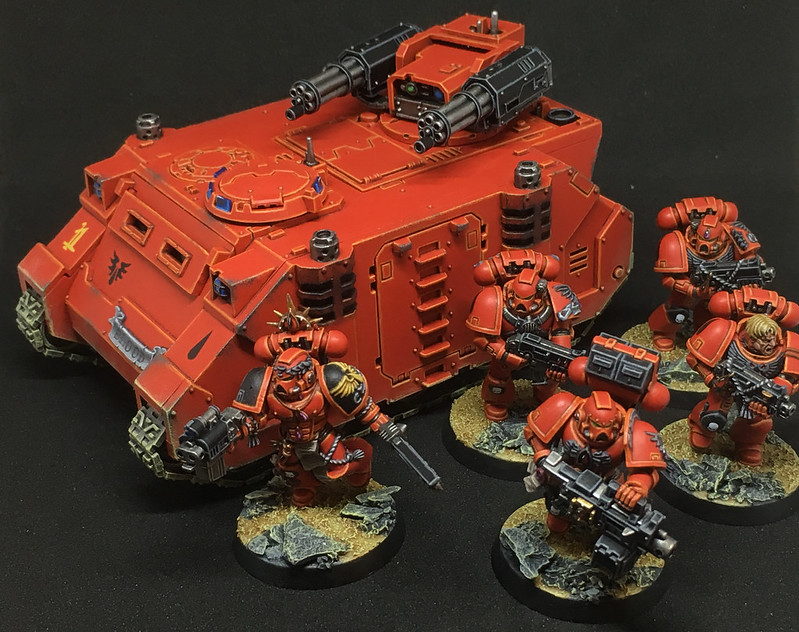 Very precise painting! And lovely bases as well. Dynamic poses of the 1st SQUAD are very thematic.
As a fellow 5th companeer, I'm keeping my fingers crossed for you. Do you plan on adding Primaris in accordance with the DoB and BoB lore?

I have started this project before Angels Blade and the first 5th compagny destruction, so I have 80% of classic space marine in my compagny. After Dark Imperium and Devastation of Baal and the new lore, I decided to not buy the last 2 tactical squads and use intercessor squads instead. If I add other primaris units, they will be auxiliary squads with the number 11, 12, etc ... Or in the 10th compagny for Vanguard Primaris.

Excellent work on the tactical squad and its Razorback.

Let’s continue with the 2de Tactical squad and their razorback 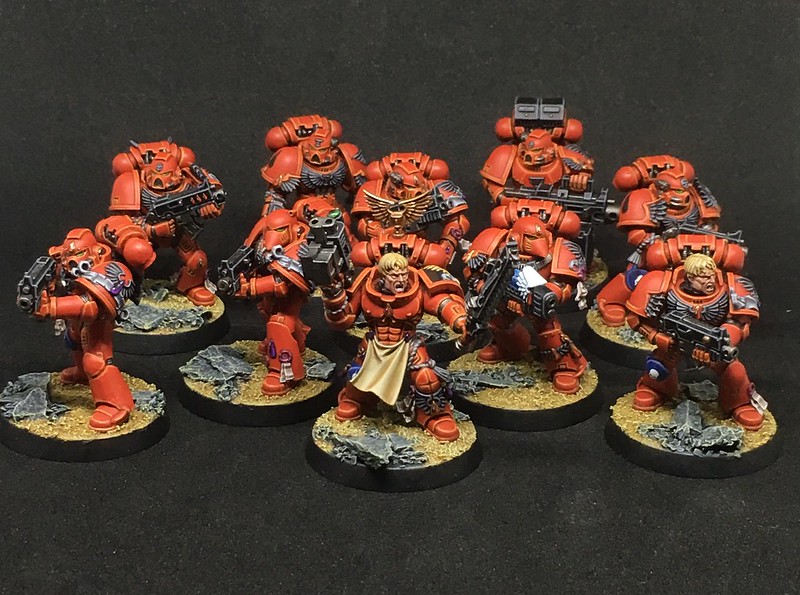 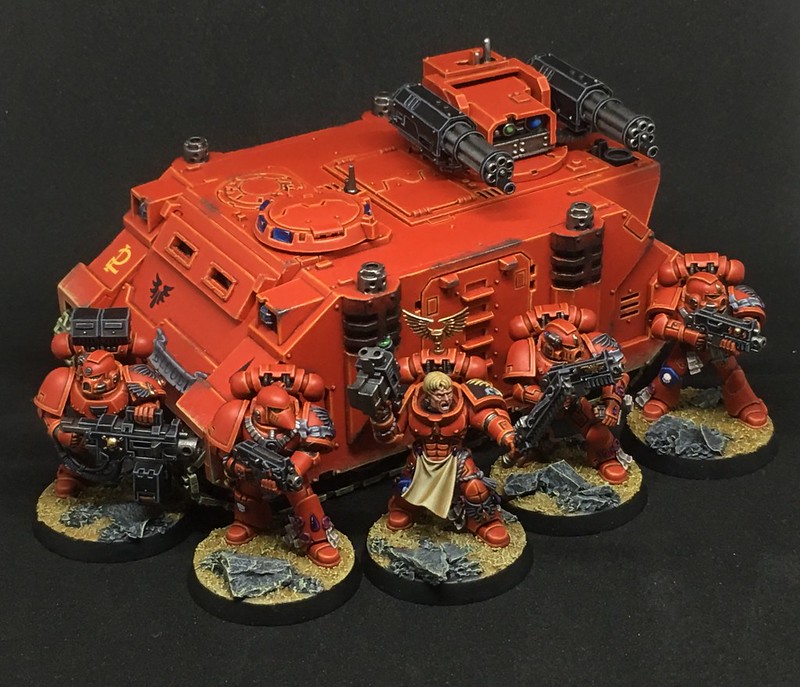 I have more time today, so I going to speak a little bit about this two first squads.

For the tactical squad number 1, I used assault space marine legs after seeing an awesome Flesh Tearer squad built like that in an old white dwarf. I find that fit well with the Blood Angels temperament : a simple tactical squad who takes and holds some position.

For the both squads, I tried to mix Blood Angels and classic Space Marines bits, because I didn’t want to shiny tactical squads and I want to show that Blood Angels are almost regular Marines. The herald of this two squads was very easy to do, the black drop is the yellow one in every space marine transfert sheet repainted in black and the small skull in the knee come from the Skitarii Ranger transfert sheet.

I gave a heavy Bolter to each squad because I like to play them as middle objectif holders. It’s a cheap weapon and with the 3 shots even if the squad moves it can make some damages. I used the one in the sternguard veteran box for the 1st squad and the blood angels one for the 2de, they look like more mobile weapon than the devastator heavy Bolter. Perfect for the tactical squads. I always play the sergents with storm Bolter and  Chainsword but the sergents magnet in their wrist for easily change their equipment, just in case. Same for the special weapon bearer.

The bases represent a desert ground as Baal and its moons are juste gigantic radioactive desert.

Not mutch to say about the razorbacks, I really like these are ForgeWorld turrets. The top is not glued if I want to play them as rhino, but it never happened. 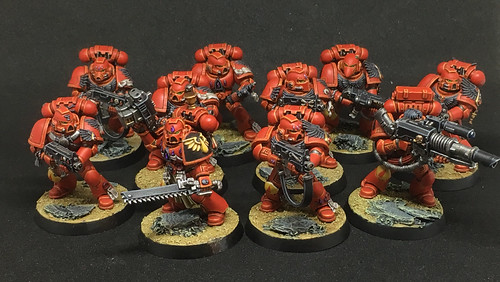 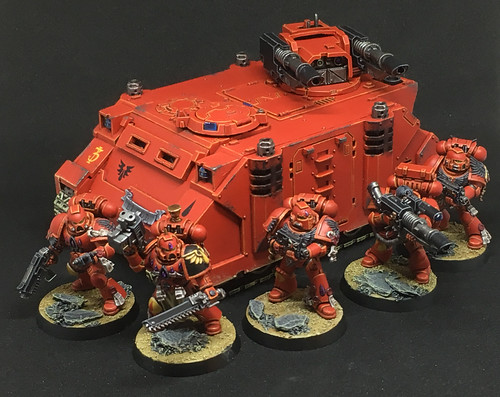 Not much to say, as the previous squads, I used bits from lot of different kits : classic tactical squad, Blood Angels tactical squad, Death company, etc ... This one have a Lascannon as heavy weapon, I find it is a nice way to ad anti-tank weapon and complete troops choices.

I wanted that my razorbacks are uniform, so a I also used the Forge world turret for the twin-linked Lascannon options.

These look great! Really nice and crisp painting. What red have you gone for, looks like Evil Sunz Scarlett? What's next to be painted?

I like the Forgeworld turrets, they are just a bit expensive for me as you can get the plastic versions for cheaper (although the forgeworld ones do look better).

These look great! Really nice and crisp painting. What red have you gone for, looks like Evil Sunz Scarlett? What's next to be painted?

Yes, it is Evil Sunz Scarlett. But I use befor a Mephiston red base, or more recently a blood angel red base.

And now the 7th assault squad without jump pack and again their Razorback : 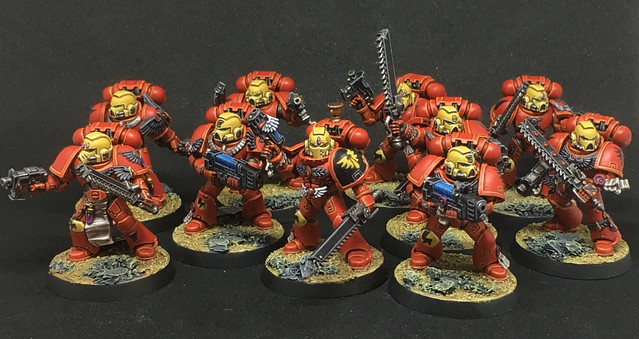 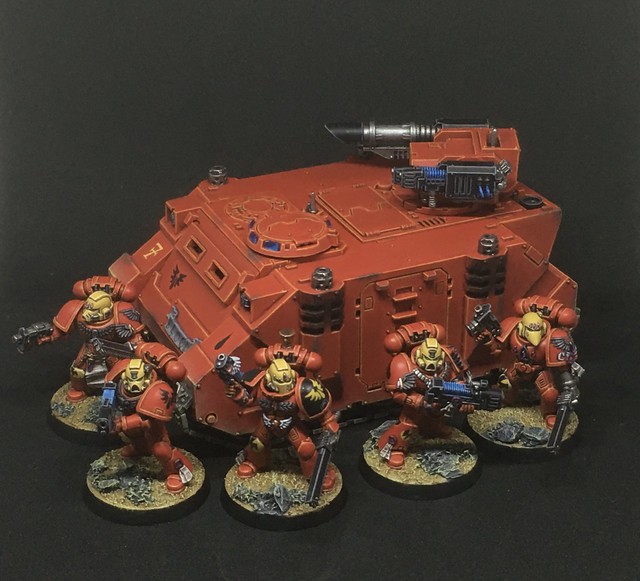 Even if the Blood Angels are the "Jump pack guys" know, I wanted remind that this chapter also love the fast motorized assault with razorback. That is why I built this squad on foot. I don't think they still can be usefull on the table but I hope find a way to play them.

Good job on the Razorback and its passengers.

If I was doing a new Blood Angels army, you got the red I would want. Unit looks great.

Last squad of the half of the company, the 9th devastator squad, and their alternative weapons with their razorback. 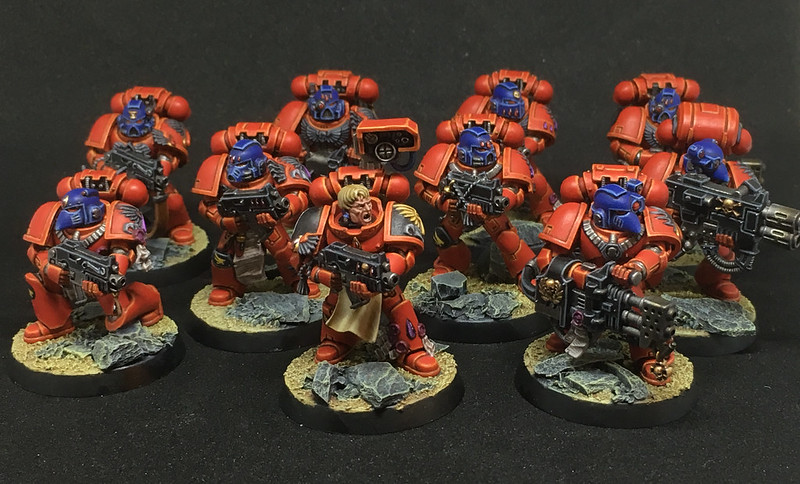 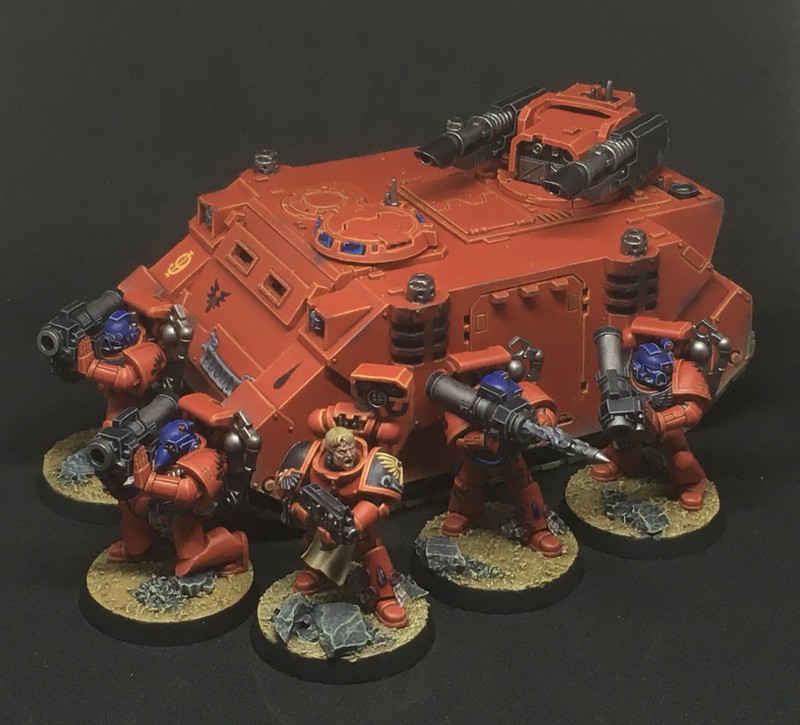 Initially there was 3 heavy flamer and 1 Multi-Meta in the squad. The plan was to play them in a drop pod during the 7th edition. But I paint to slowly, and I finished  them one or two months after the beginning of the 8th edition. So I painted the four missile launcher at the beginning of the last year. As I have already few lascanon on my razorbacks and my tactical squads, I'am rather satisfied with those weapons.

Next time I gonna to show you the few alternative heavy weapons of my tactical squads, and then it will be the characters turn to conclude the half of this company.

Excellent work on the Razorback and its passengers.

Some alternativ heavy weapon of my tactical squads : 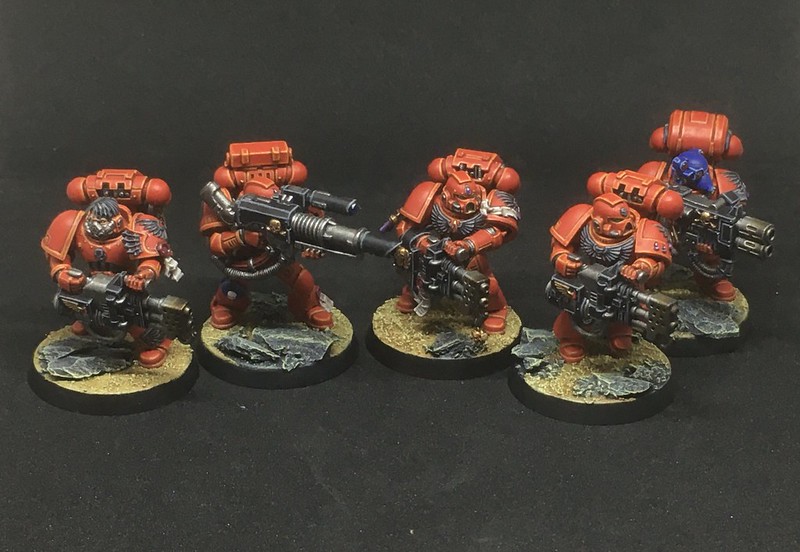 During the 7th edition I played very often two or three tactical squads with 10 space marines in drop pods. Always with a heavy flamer, a melta gun and a sergent with two inferno pistols. I split the squad in two combat squads : One with the heavy flamer and one with the meltas. I really liked those squads, they blew up a lot of vehicles and burned many heretic. It's sad to not see anymore heavy flamers, 10 man squad or drop pod on the table.

Your lines are so clean and your highlights so crisp, I could see these in a White Dwarf.

Today it's the captain's turn : 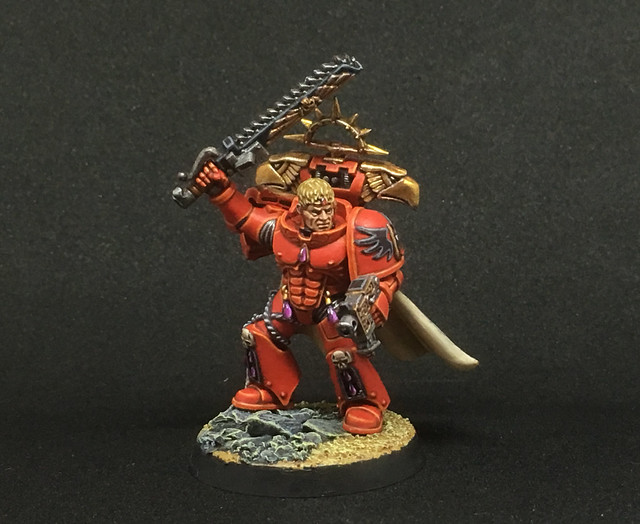 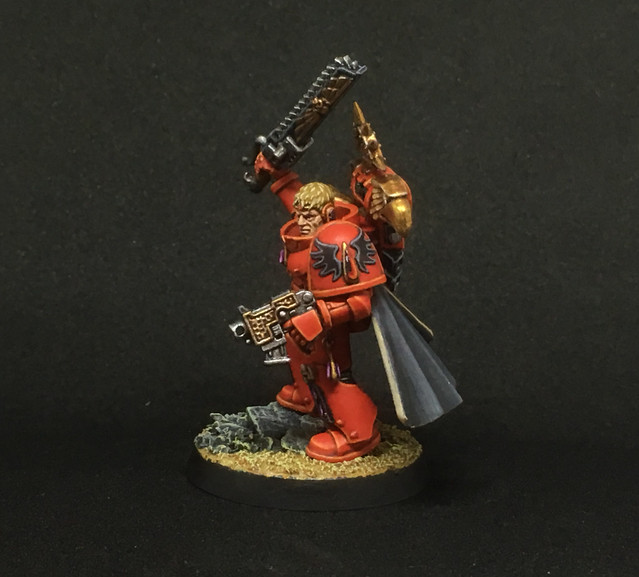 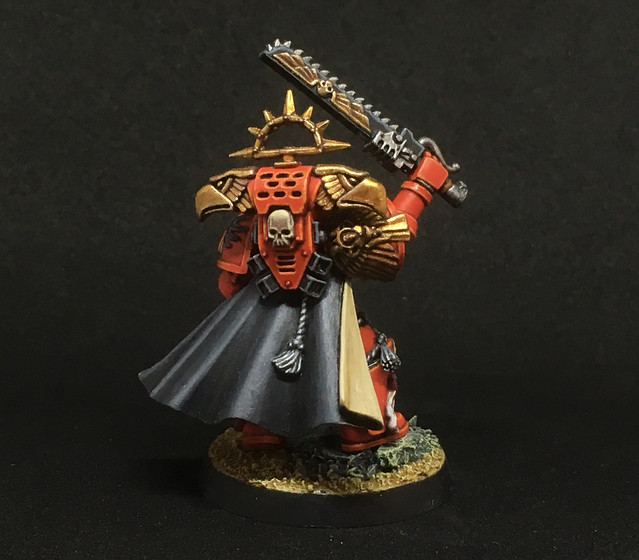 I build this miniature with in mind a conversion of the 5th edition's codex. I don't know if you see which one, I didn't find any picture online. I used a lot of different plastic kits :
- Death company for the legs and one Shoulder Pad

- Sanguinary guard for the buddy

I put magnets on the weapons to switch them but I only play this captain for the aura bonus. So he has almost always this chainsword and the bolt pistol (sometimes a Stromshield.) 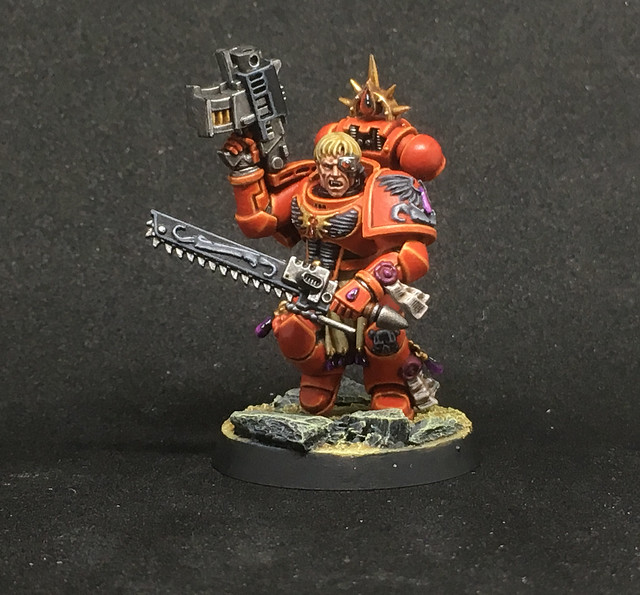 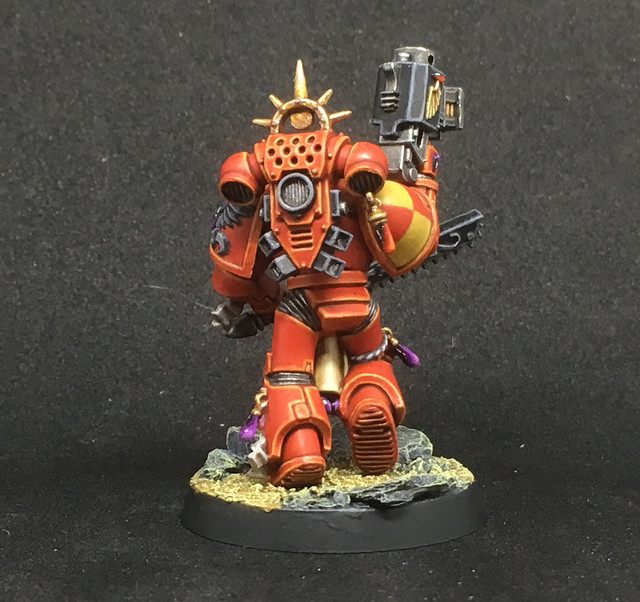 As the captain, I used a lot of different kits on him and I put magnet in the weapon. But as the captain, I always play him in this configuration. He stay in the back line to give his aura bonus and use is cheap storm Bolter for few shots. At the start of the 8 edition, I try to play him with a heavy flamers devastator squad in a razorback. But this strategy only works once, after it is too predictable.

Good job on the LT.

One of the miniatures which I'm very proud, the company ancien : 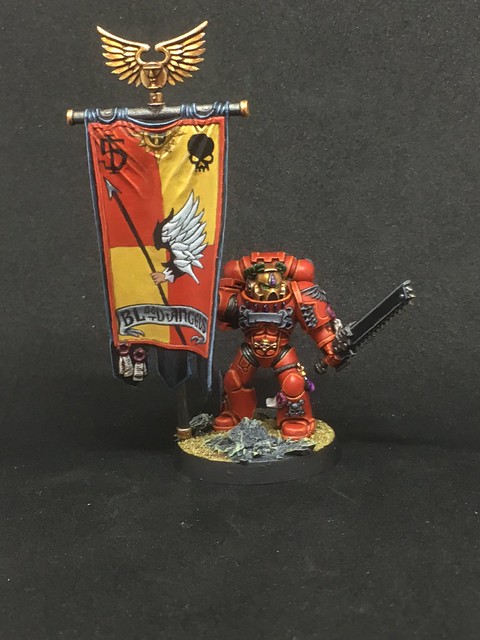 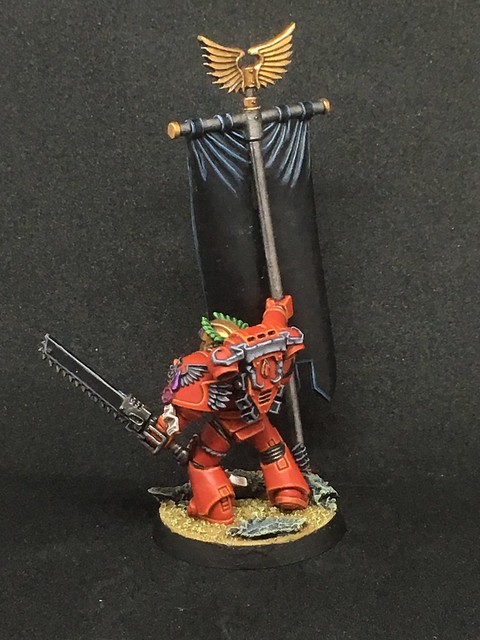 It took me a while to find a good idea for the banner. As the 5th company is call "Deamonbanes", I thought the spear was appropriate.

Great stuff man, kudos. Save pictures to my inspiration file.

I do find it hilarious that some people were saying the size of newer marine stuff looks great next to regular humans like Cadians, and then GW upsized the humans so they are the same height as marines again

Excellent work on the Ancient.

Today it is the turn to the Sanguinary Novitiates 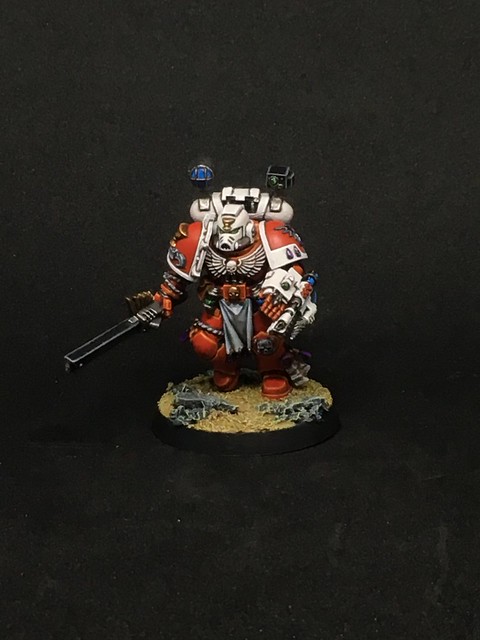 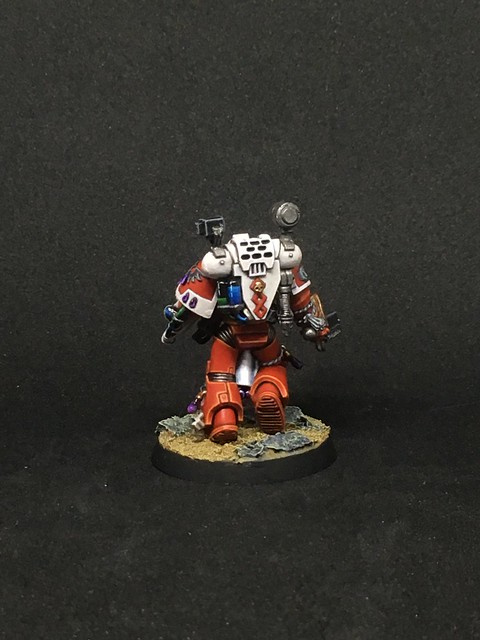 I never used it, because my characters are the only units with multiple wounds I have. But I really like the combinaison of the red / cream colors.

Also tagged with one or more of these keywords: Blood Angels blog