I, Reclusiarch Jolemai , embark on the 12 Months of Hobby Challenge, and for the month of August pledge to complete 1 x Chaplain on Bike to the defence of the Imperial Faction by month's end.

Having not been able to make quite as much progress as I'd hoped to by this point, I only have my Night Lords test model completed, in addition to my previous 2 Havocs. The lighting on this photo isn't the best so I'm hoping to do a roundup of all the models this month with better lighting at the end of the month. 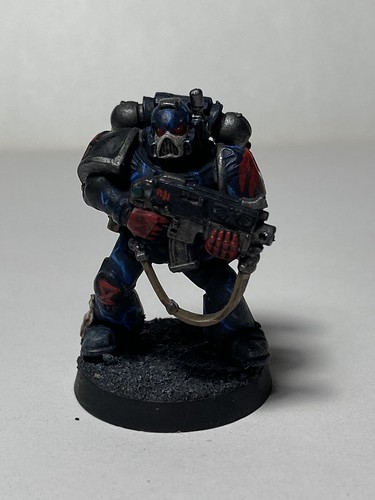 With an attempt to convert a sculpted Ultramarine shoulder pad into a Night Lords symbol. 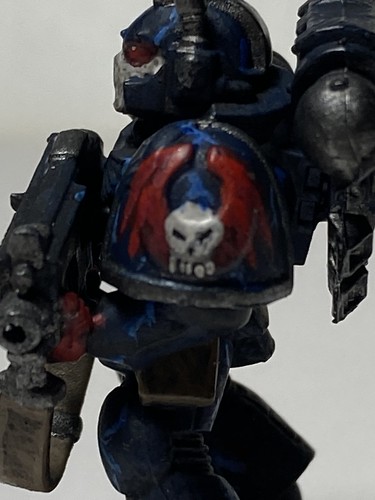 I have also been taking a lot more time (it feels like) on the Blood Angels test model than I might normally give to a model. I've tried to improve my steady hand at panel lining and tried some wet blending on the banner. Highlighting the banner also turned out really well, and I definitely want to continue the method going forward. It's the only actual Blood Angel I own, but I've had idea for how to paint it for a while and I'm really excited to be doing it this month. It's a great palette cleanser from dark iron and hazard stripes. The Night Lord was also a great palette cleanser, so I'm excited to paint my small patrol of them before year's end. 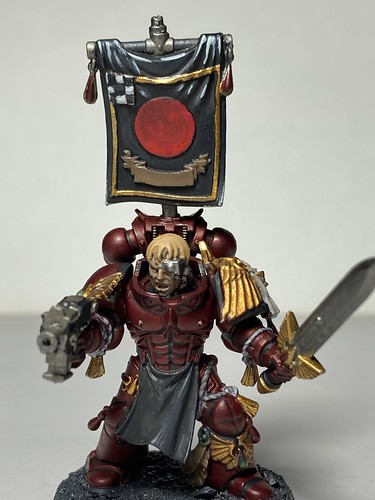 This Blood Angel is still WIP, but wanted to share the update. I'm hoping a glossy varnish on the red armour will really make it pop.

If the scheme works in the end, this is so refreshing I might consider starting a Blood Angels patrol to the backlog I've been shrinking through 12 Months of Hobby.

Maybe. Managed to get to stripped last night so it's on track. Interestingly, the Chaplain is standing on his toes on the footplate (i.e.he doesn't sit down) which I never knew.

Maybe. Managed to get to stripped last night so it's on track. Interestingly, the Chaplain is standing on his toes on the footplate (i.e.he doesn't sit down) which I never knew.

I'm going to try to get two more suits done this month then I'm off to do some anime models for a bit.

Some progress on the preceptor, his weapon came in. I'm going to make a holster on his back to carry the sword. This way he can switch in the field between the 'reaper chainsword' and his thunderfist. Just want to do something different with his shoulder plates and not sure what.

I, Brother Argent, vow to also complete for the Month of August Squad Legatus, a Five man Chaos Marine Squad for, ironically, the Imperial Faction. 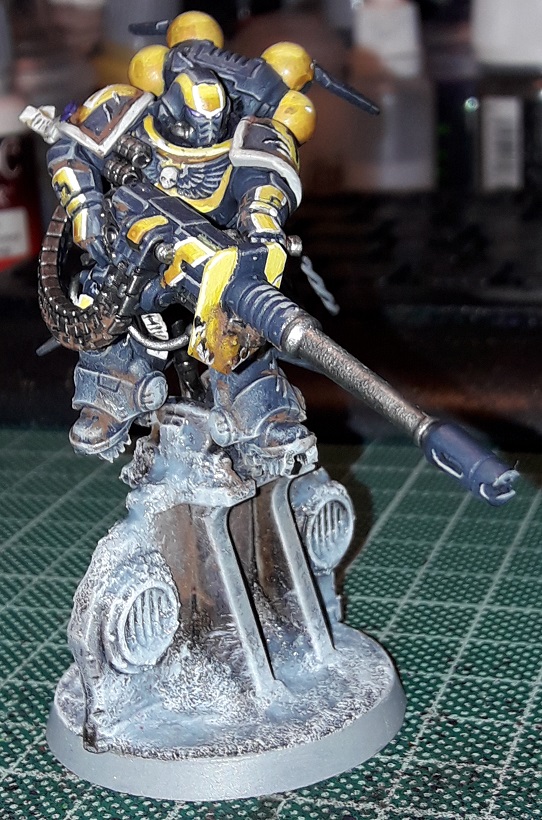 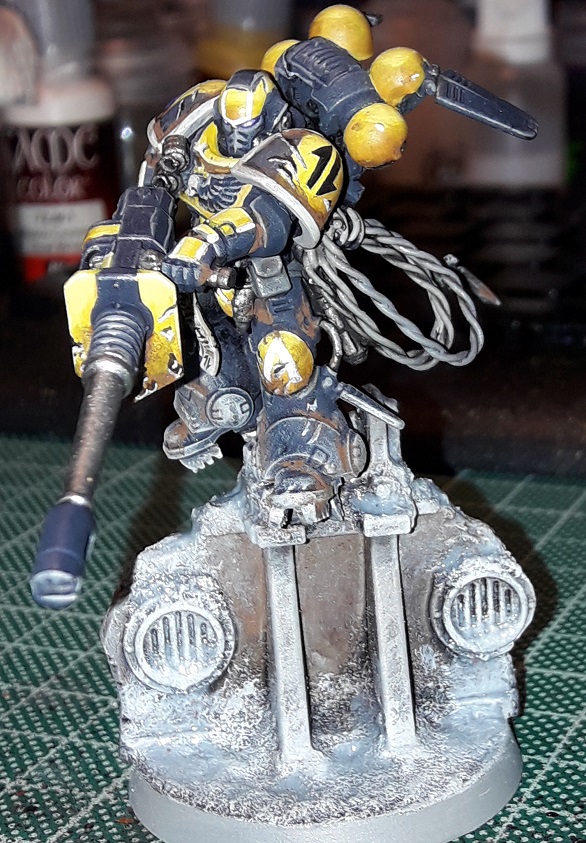 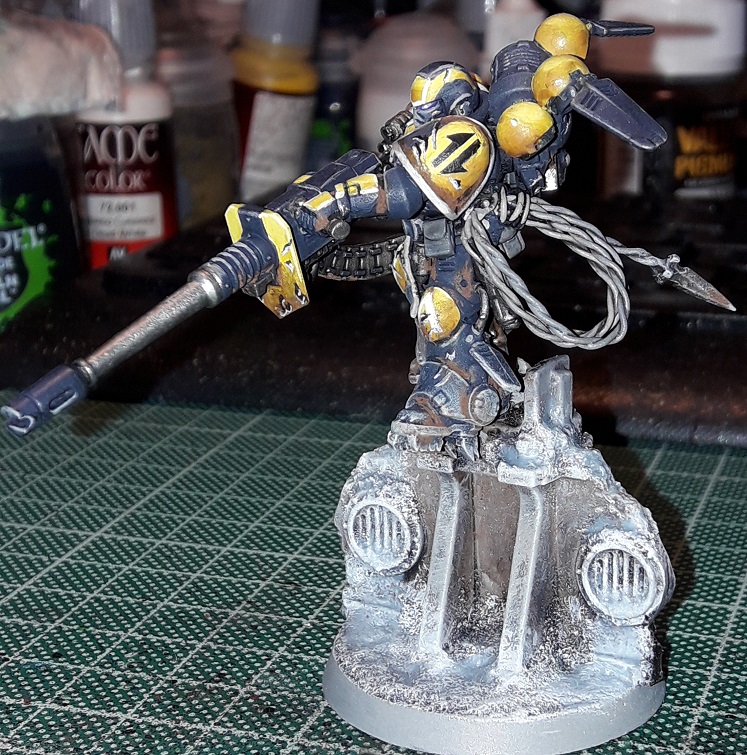 As for the next thing on my to-paint-list, I, TPS, vow to paint a Siege drill for Leviathan dreadnought, in support of the Xenos, by end of August.

On my desk it's 2/3 so I'm roughly halfway through 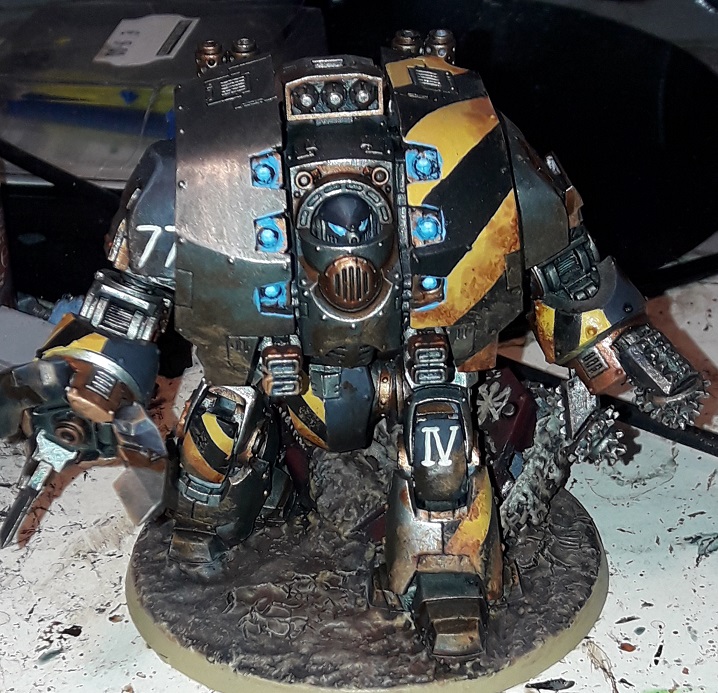 He's got a new favourite tool to tear down fortifications. Vow complete!

This was also my Lockdown Painting Challenge vow, and a revow in this thread after failing in July.

Found some time on my hands and managed to speed-up the last stages and so my vow is complete: 3 Eradicators of the 9th Company and some repainting on the Assault Intercessors.

For August, I vow to complete my keeper of secrets: 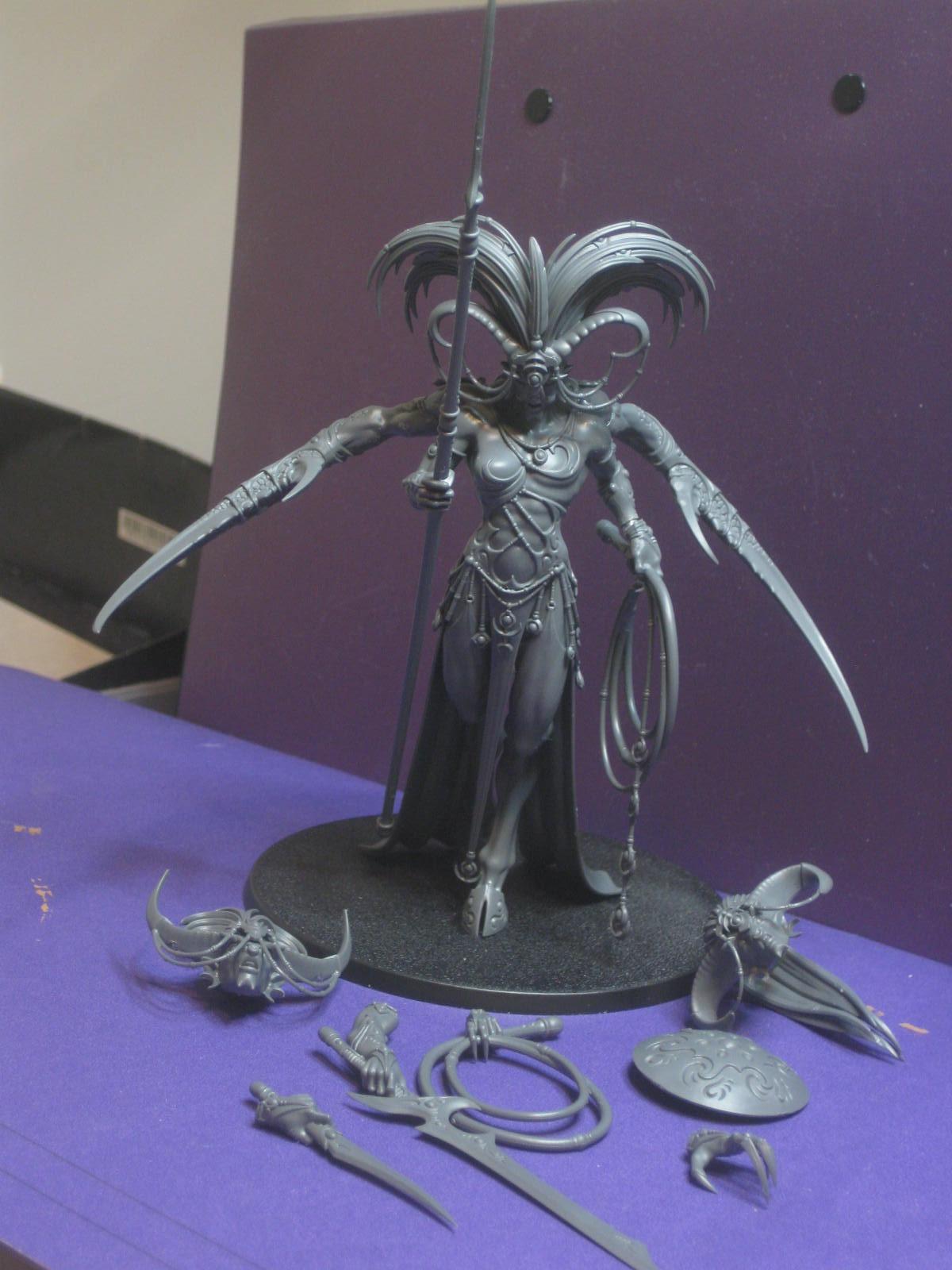 ... Well then, now that I am out of the Covid-19 Warp Jumps from work's new schedules flattening me for the past 2 months and failing my Veterans vow (they will be complete sometime this year...), I'm hopping back with a small vow to get myself restarted and as part of the Liber Martiale/Iron Gauntlet.

I, Brother Cambrius do solemnly swear to complete 1 Primaris Lieutenant and 2 Intercessors from the Sons of Doom chapter, before August's end for the Imperial Faction!

Alright, got a bit of a story to share. Went in to my new place to have a game against a friend. Coincidentally, I was low on paints so I decided to pick some up there. Was about to leave, when I saw a box out of the corner of my eyes. Curious, I went and saw, much to my surprise, a discontinued Lexicanum Varus model. That's when it hit me - the Emperor sent me this model to redo my librarian. Managed to haggle the price down to 55 AUD, and went along with the conversion to a Grey Knight. This turned into one of my best works yet.  Presenting my namesake in the 40k universe, Codicier Skywrath of the Grey Knights! We are the Hammer!

Hopefully this is my ticket to the Bronze Artificer award this month..

EDIT: Just realised he needed to get his base rim fixed, working on it now.

And so I declare my second August Completion:

And for my next trick:

Master of Possession and 2 Greater Possessed.  Admittedly already started on these guys.  Well, mostly finished them.  But I did start working on them a day or so ago just never got around to posting photos here yet... That counts, right...

Well this has to be a record for me, as I am very happy to say mine are complete for August!

And a better focus on Lieutenant Eilenis Kyntav "The First Reborn" himself, including the grey cross that marks his fresh promotion and yet to complete the "Promotion Tithe" tradition of the Sons of Doom:

As you can see, he's got half a bionic face and a bionic left arm. There's a bit of a story about that and why he's called the "First Reborn", but those details will be emerging later on as part of the Liber Martiale/Iron Gauntlet and in my Hall of Honour thread tomorrow .

And that is a really bad photo...

Cambrius, with those bionics and right pauldron, I'd say Lt Kyntav is on a straight and illustrious path to being entombed in a dreadnought chasis

Cambrius, with those bionics and right pauldron, I'd say Lt Kyntav is on a straight and illustrious path to being entombed in a dreadnought chasis

Well he almost did get interred, if the bio-acid was more spread out over his body... Instead he was the first to cross the Rubicon Primaris in the Chapter.

I'll have to give him more Primaris to command now...

Now that the heatwave is over, back for more painting! I, TPS, vow to paint 5 Assault Intercessors, 2 Suppressors and 6 Chaos Furies, for the glory of the Xenos, by end of August. 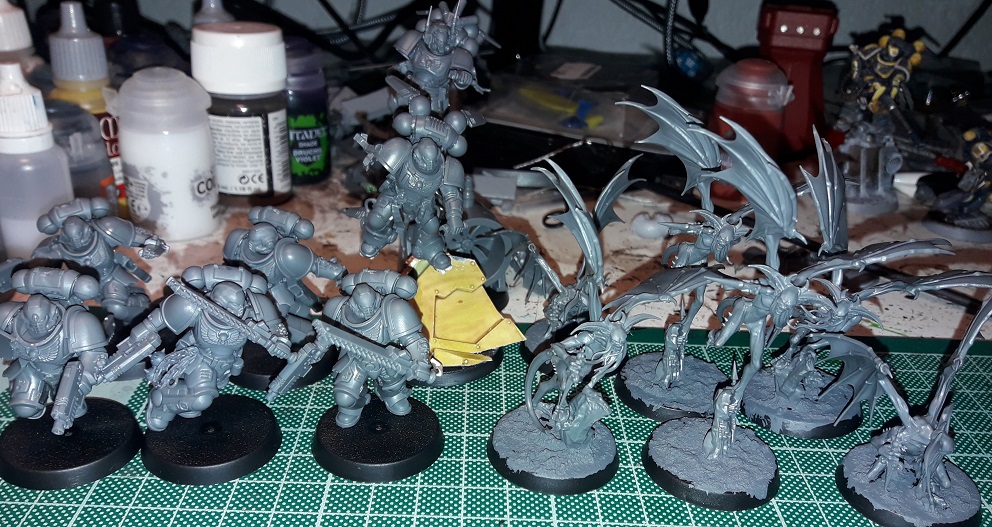 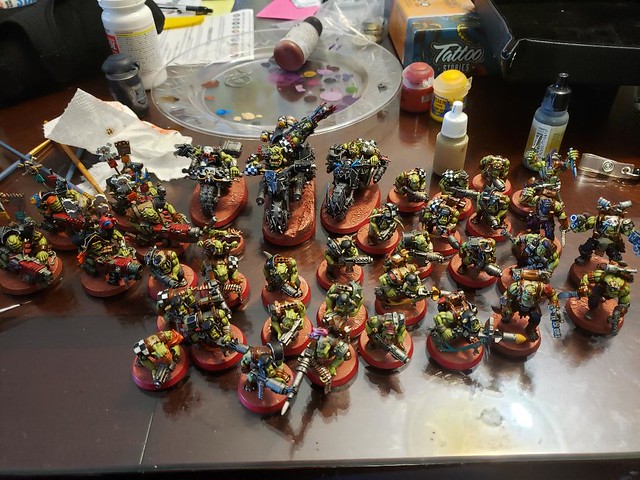 I, MAJKHEL of the Blood Angels, embark on the 12 Months of Hobby Challenge, and for the month of AUGUST vow to complete 3 Outriders and 1 Whirlwind Missile Launcher to the defence of the IMPERIUM by month's end.