Looking for Ideas and Inspiration for my WHFB Empire Marines

92 replies to this topic

Suggestions for Warhammer fantasy Empire themed Chapter names that aren't direct references to WHFB? I'm struggling to figure something creative
I'm also unsure as to the first founding chapter these guys would be based on.

You have a whole host of animals associated with medieval/fantasy. You have Griffons, Dragons and Lions already used in 40k, I'd start with one of those types of creatures. You then just add a forename, we already have Celestial Lions and Howling Griffons for example.

I'd go Imperial Fists or Dark Angels for founding Legion.

For something truly unique, you might wanna play on that 3rd one? Or maybe just use the symbol as the chapter icon and use a slightly less evocative name? The Starstriders could be a crusading chapter, for example.

What do you actually mean by WHFB Empire-themed, anyway? You’ll be using bits taken from the range to individualize your models? If so, do you have any specific kits in mind?

If it’s not about models and just a matter of fluff, then anything that sounds medieval-fantastic-ish would work, no?

Skullcrackers, with a thunder hammer superimposed over a skull as a Chapter symbol? Knights Jaguar, with an elite formation in the Chapter known as Griffin Talons?

I kind of want the army themed after the Reiksguard/ Demigryph Knights and the Chapter Master to be based on Karl Franz, since those are favourite WHFB models of mine. Additionally, I tend to like close-quarters combat blended with a solid gun-line, similar to how the Empire's hammer-and-anvil tactics work in Fantasy Battles and the subsequent Total War games based upon it.

A few random names I thought of:

- Sons of Sigmar (a bit too literal, though if the Chapter refers to the God-Emperor as "Sigmar" it could work)

-____________ Eternals (A play off of Stormcast Eternals, technically this is AoS and not WHFB, but it could still work)

-Blazing Suns (Reference to the Knightly Order of the same name)

-Knights of the Emperor

-Eternal Stars (Reference to the Knights of Everlasting Light)

Have you picked a color scheme? That might help in picking a name, or you going to pick a name and let that guide the color scheme.

I’d always pick colors first. Painting is usually the hardest thing to keep motivated to do in the hobby, usually.

The colour scheme will be partially based off of the Demigryph Knights, with influence from Reikland State Troops: 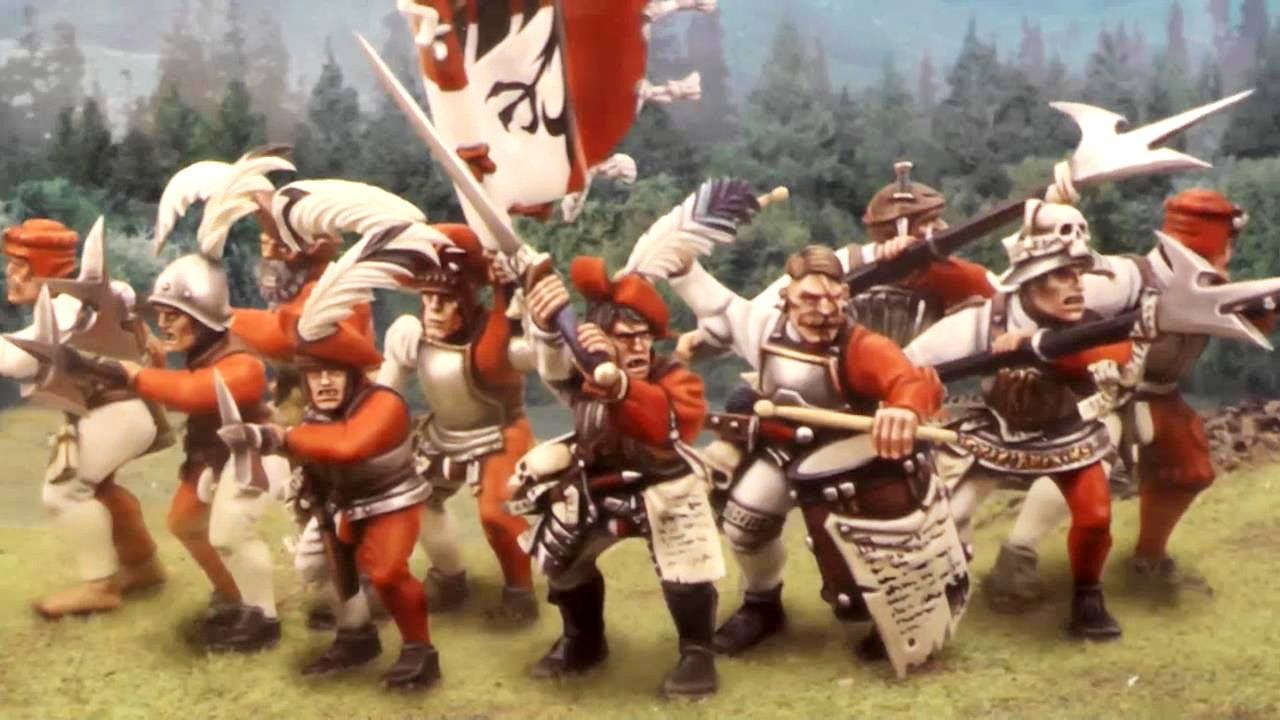 Black Cat that looks a lot like inspiration for a Howling Griffons Chapter or at least one similar. Always prefer a DIY color scheme myself. Also with how you describe your preferred play style I’d strongly recommend Ultramarines. Their versatility makes them less point and click than Iron Hands but piloted by someone who loves that style they have the ability to take all comers in my opinion.

And as much as I’m not a Smurf fan by using Sons of Sigmar <Ultramarines> you can paint and play Robby G which is a really cool model.

Real question is what would Robby G's role be in the army fluff wise?

I know he's great in game, but it's be hard to explain why he's always with my Chapter.

Unless Karl Franz is secretly a Primarch

I've narrowed it down to three possible name choices, though I'm still open to others:

3. Hammers of the Emperor

I'd use the same reason that eveyrone uses that he is the commander of all Imperial forces and not just the Primarch of the Ultramarines these days. You can easily explain his prescence being that they are part of his task force that he is currently leading.

Talons of Mortis sounds cool to me. You could play on Mortis being their homeworld or something.

Since the Double-headed eagle is the symbol of the Imperium, make sure, if you do use a Griffon somehow, to go with the two-headed one...

Ideas for who in the Empire would be Master of the Forge, Chief Librarian, Master of Sanctity, etc?

Also, I had the idea that each province of the Empire could be represented within one of the battle companies. Since there are ten provinces and ten companies this works out rather weil.

This is my favorite among the names suggested.

Why not a Knight Conquistador, i.e., Knight warsuit converted to serve as a transport?

Also, I had the idea that each province of the Empire could be represented within one of the battle companies. Since there are ten provinces and ten companies this works out rather weil.

Additionally, I have a basic backstory figured out:

The basic fluff would be that during the Indomitus Crusade, the Chapter was involved in a compliance campaign on a world similar to the world of WHFB, where various factions (ie Aeldari, Orks, etc) were vying for power. Naturally, the Chapter sided with the human colonists of the world (who had formed their own Human empire on the planet in the days since their isolation from the Imperium) in order to help them to drive the Xenos from the planet, in exchange for the human "Empire's" compliance and reunion with the Imperium of Man. This agreement was initially met with resistance by the denizens of the planet's Empire, a rebellion which was subsequently crushed without mercy.
However, after hearing tales from the Astartes of the God-Emperor and his mighty feats (which closely resembled those of the indigenous people's legends of their warrior-god Sigmar), the leader of the planetary empire relented and surrendered to the Imperials. Thus, the planet was won over and compliance was established.
After discovering many of the local warriors are compatible with Astartes Gene-Seed, the Chapter was ordered by Guilliman to remain behind as the wardens of this newly discovered colony of Mankind, while the rest of the Indomitus Crusade continued on. However, shortly after the departure of the rest of the Crusade, the Chapter was isolated from the rest of the Imperium by the Cicatrix Maladictum, forcing it to fight for its very survival against its foes.
When Guilliman returned to the planet sometime later, he discovered a world which had fully integrated the native traditions of the planet with those of the Imperium. Where Sigmar was once the warrior god of lightning that bound the people of the Empire together, he now represented the might and fury of the God-Emperor, made incarnate upon the planet. Where once the Imperium was seen as a foreign invader, now they were seen as the wardens of the systems, the defenders of the planet and its people.
(more to come)

Depending on your painting skills you might want to take a look at the Howling Griffons colour scheme as they feature the same quartered colour scheme as some of the WHFB Empire models. Just replace the yellow with white and you are good.

I'll test both out

Here's another version of my color scheme.

The colour scheme will be partially based off of the Demigryph Knights, with influence from Reikland State Troops:

That photo is Talebheim like the rest of the studio Empire Army. Reikland is pure white. Karl Franz is from Aldorf which was red/blue.

Demigryph knights don't have a colour scheme, Knightly Orders had colour schemes and could be either be a mix of horse and demigryph riders or purely one or the other. Knights could also be independent from an order and just fight together as a band of free knights in which case they wouldn't have a unit colour scheme. I think the 'eavy metal/box art demigryphs are supposed to be Knights Griffon but that order has a lot of colour schemes in various publications. That picture seems to be a fan made scheme.

I'm less familiar with WHFB than 40K. Thanks for enlightening me.