How much identity does a warband retain in the Black Legion?

I'm working on my Black Legion and I had the idea to add a bit of a personal touch on the army since fluffwise it would have been an independent warband before "taking the Black".  I seem to recall, although I can't remember if it was explicitly stated, that you essentially give up your previous identity when you join the Black Legion ("Brotherhood for the brotherless", "children of failed fathers" and all that).  It's been a while since I read Talon of Horus and Black Legion (might be time for a re-read) but while I know there's still minor subgroups in the Legion (Telemachon's "Shrieking Masquerade", Falkus' "Aphotic Blade", Lheor's "War God's Maw" etc.) I can't recall if there's anything unique about their armor style (although IIRC Telemachon's group are Slaaneshi Raptors/Warp Talons or both and Lheor's are Khorne Berserkers), like an additional splash of color or something on the otherwise black armor.

Without getting into "my dudes", is there official lore saying one way or the other?  I'm still debating if I wanted to do it or not but I had the idea of adding an extra color, like an arm or shoulderpad or something in a non black&gold color to identify the specific warband's allegiance within the Legion, I just can't remember if that's actually a canon thing.

- Wayne aka "Wayniac the Indecisive"

It varies. There are warbands that retain their old colours with only a single black shoulder pad even if most are subsumed entirely into the Black Legion, so you could definitely add in a spot colour/armour panel outside of the normal black & gold without contadicting the lore (e.g. BL Berzerkers have traditionally been depicted in black & gold with red helmets & shoulders since 3rd edition, Rubricae can be in anything from Tizcan red with a black shoulder to mostly black with only a little blue, etc).

Forces like the Shrieking Masquerade & War God's Maw are the personal forces of high-ranking commanders, and may themselves consist of different warbands with their own commanders who come together under one banner, broadly connected (in this case) by their beliefs. Factionalism is rife. The Black Legion, for all of its power & organization relative to its peers, is at its core still just a vast collection of warbands united by their oaths to the Warmaster. So long as they pay homage to him and answer his call to battle I doubt Abaddon cares what they livery they call their own.

TLDR: if there is some black (& gold, although that's a 3rd edition+ addition to the traditionally black & silver BL) on your models, and you have the Eye of Horus depicted, there is a huge amount of leeway as to how you depict Black Legionnaires. It would be interesting to know if the Black Legion look down on those warbands who don't adopt the colours entirely, but to my knowledge there is no lore discussing this.

Yeah Abaddon only feels threatened by OG SoH factions / known personalities, so they would have to watch and check themselves more than anyone. True Sons good example. Every one else seems to have an easier time in modern BL.

Thanks for the replies! I did happen to find a passage in Black Legion which seems to indicate that you DON'T keep anything from your "past life":

Each of us wore battle-riven armour with trappings of corroded gold. Our battleplate was black, banishing old colours and old allegiances with the totality of an eclipse.

Although whether or not that specifically refers to Legion colors and markings is debatable. Also this is from early in the Legion's formation so it might have relaxed over the millennia (or, more likely, just not something worth bothering with anymore)

- Wayne aka "Wayniac the Indecisive"

I always thought that was more directed at prior 'loyalist' Legions and less at current day inductees.

Re the splash of colour, I have seen plenty of Berzerkers with either a red pauldron or a red helmet, same goes for pink and Noisemarines, so it wouldn’t be that far fetched at all for, say a renegade chapter who wears yellow keep a little of that in its colour scheme as, like Marshall Loss says, there is still plenty to show there allegiance to the Warmaster.

"Maybe you join the Black Legion out of necessity, and despise it, gearing up to betray them later. Maybe you find that the freedom is liberating, and stick with it. Maybe you find that it's literally no different - your warband is still the same, your faith is still the same, and you have the same complicated relationships with Black Legion warbands that you did with Word Bearer warbands. Legion ties mean everything to some warbands, sometimes, and nothing to others, at other times." -ADB on that hypothetical

I would say look at the examples of Black Legion that GW has provided so far. 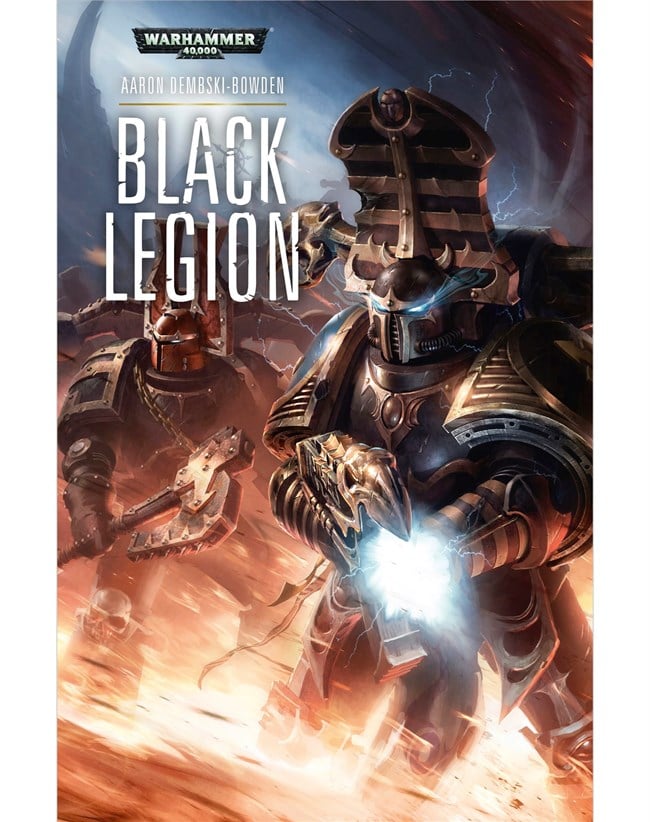 This is the most prominent photo I know of on the cover of Black Legion. The quote from ADB from Lucerne is pretty solid though.

Back to x BLACK LEGION x