305 replies to this topic

What happens in Vegas doesn’t necessarily stay in Vegas – not when it’s this awesome! Very soon, this legendary city will play host to one of the world’s most legendary gaming events – the Las Vegas Open. This year, we’ll be at the Las Vegas Open in force, bringing you all the news from the Warhammer preview and live gaming from the top tables. 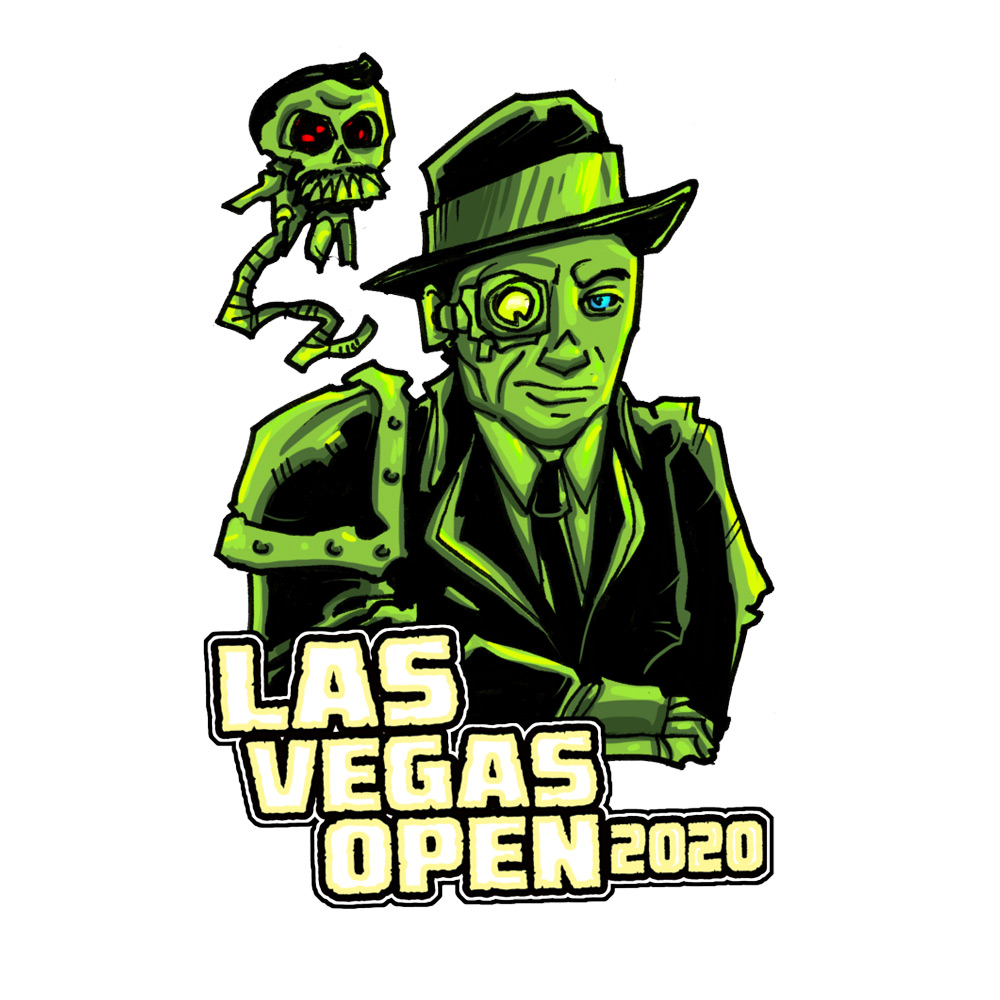 LVO will also see a thrilling Warhammer Preview, packed with reveals, teases and cool stuff you didn’t even know you wanted to see – not least pointy aelves! There’ll also be some equally huge news for Warhammer 40,000. 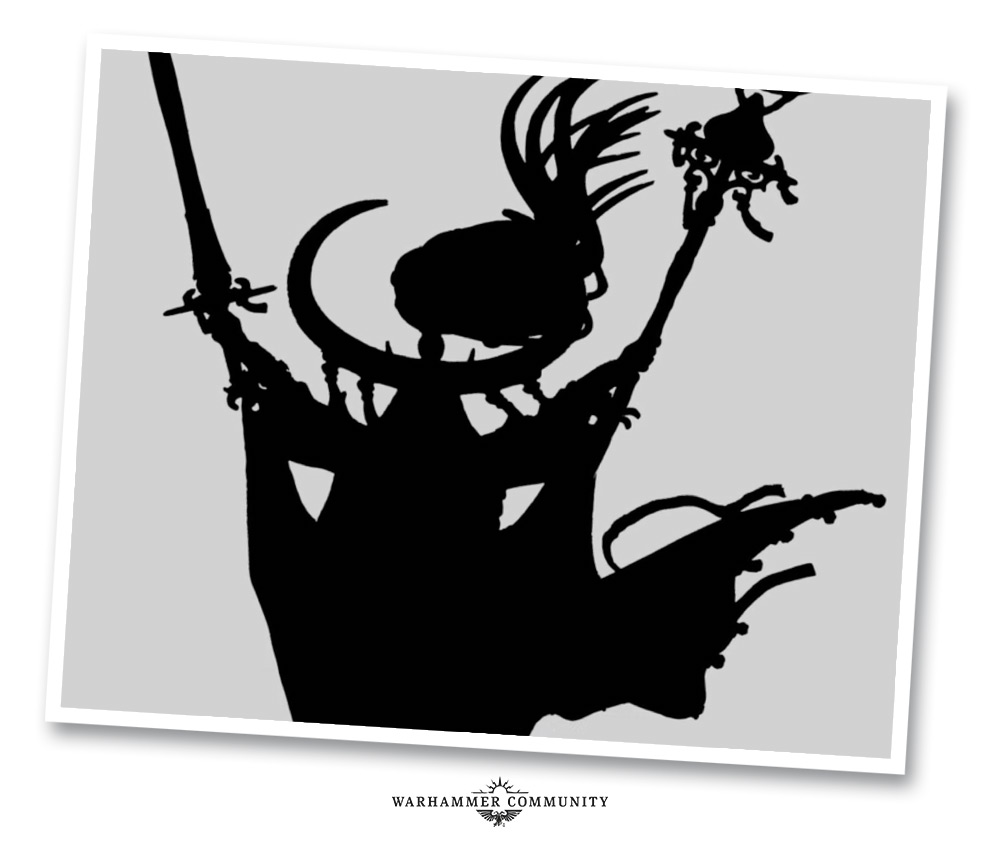 We’ll have news from the Warhammer Preview for you on Thursday night if you’re based in the US and (very) early on Friday morning for the rest of us.

Taking place in January every year, the LVO is one of the USA’s biggest Warhammer events, bringing together hundreds of gamers looking to prove their tactical genius in a vast variety of events, including some of the biggest tournaments ever for Warhammer 40,000 and Warhammer Age of Sigmar. 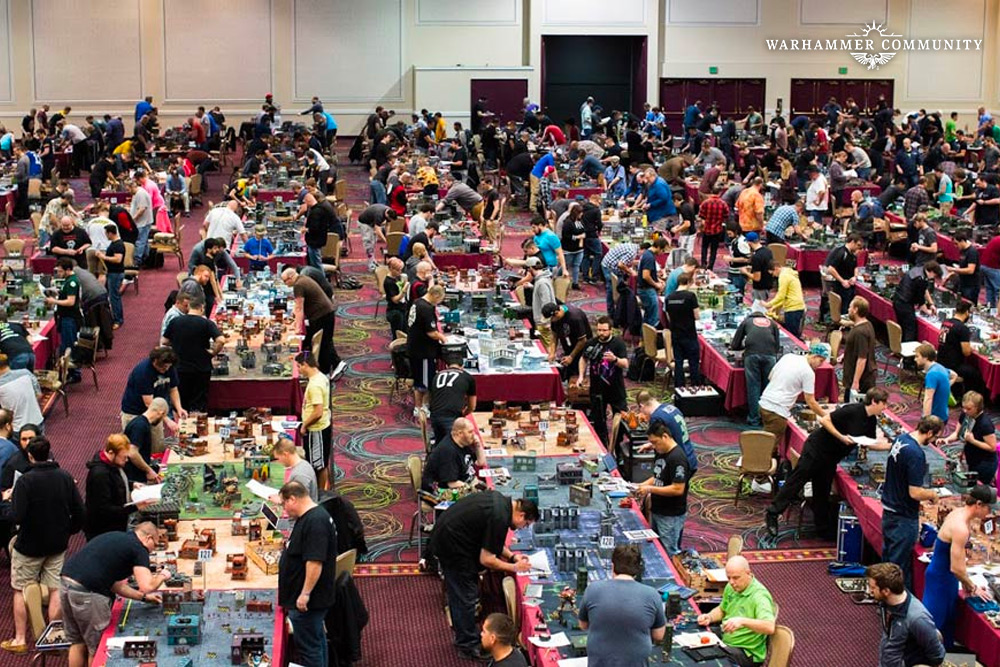 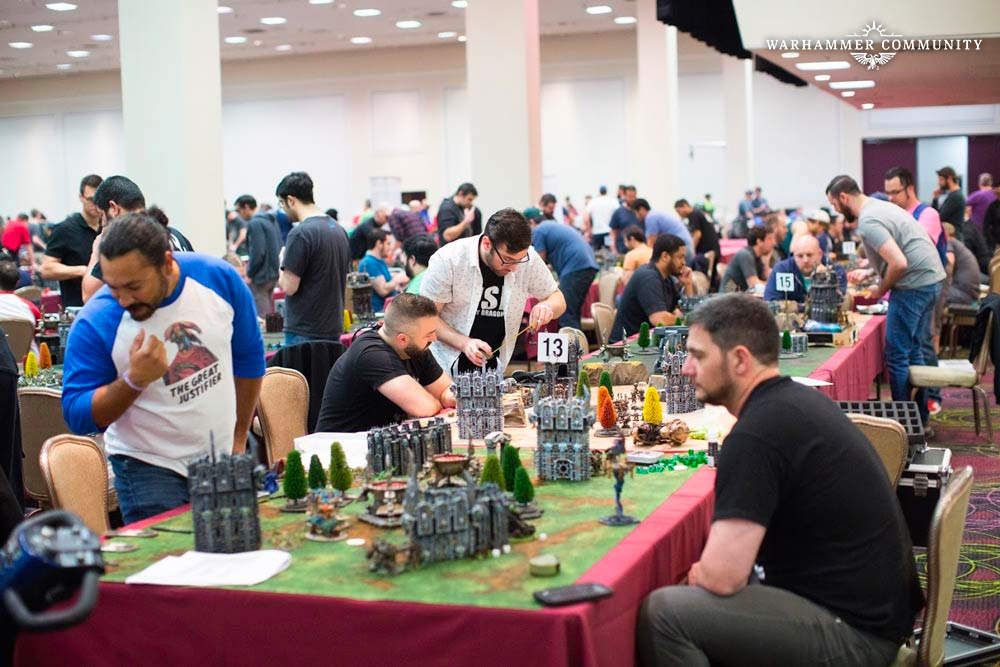 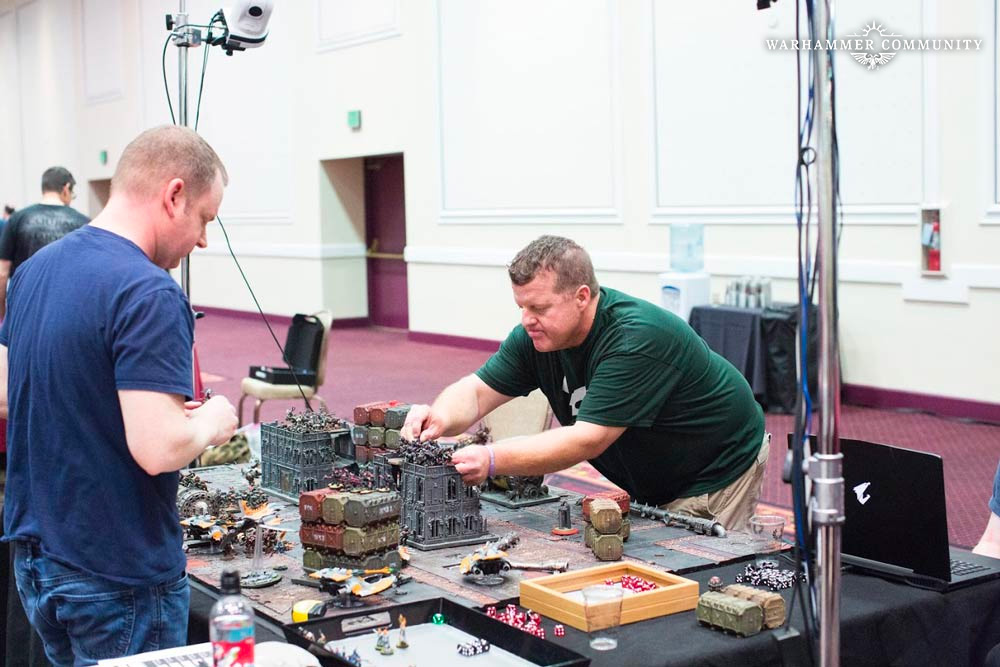 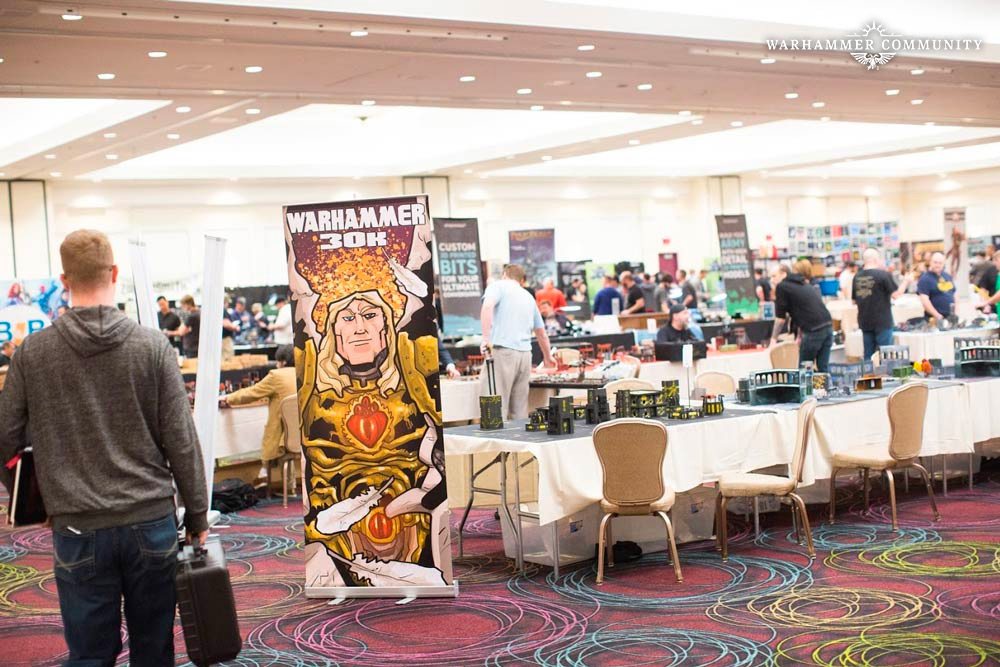 With the Psychic Awakening now in full swing and new codexes and supplements in play, who will conquer the 41st Millennium? Here’s event organiser and commentator Frankie with his predictions: 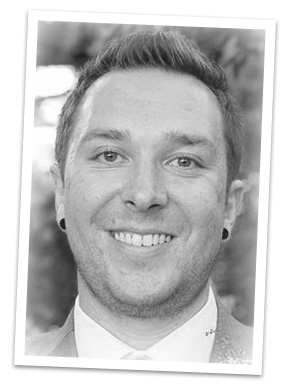 Frankie: It will be interesting to see which Chapter will be leading the Space Marines pack, and which armies will be built to counter the Space Marine power house. I believe White Scars and Iron Hands will be dominating the top tables, but it will also be very exciting to see how the players react to the first 1000-person tournament in this hobby. Psychic Awakening will strengthen both Chaos and the Blood Angels, giving them the tools to take down the other power-armoured foes.

We want to give you the chance to see for yourself, which is why we’re streaming LIVE from the massive Warhammer 40,000 Championships – the world’s biggest event for the game of strategy battles in the 41st Millennium (so far!). Check out the timetable below for when to tune in. 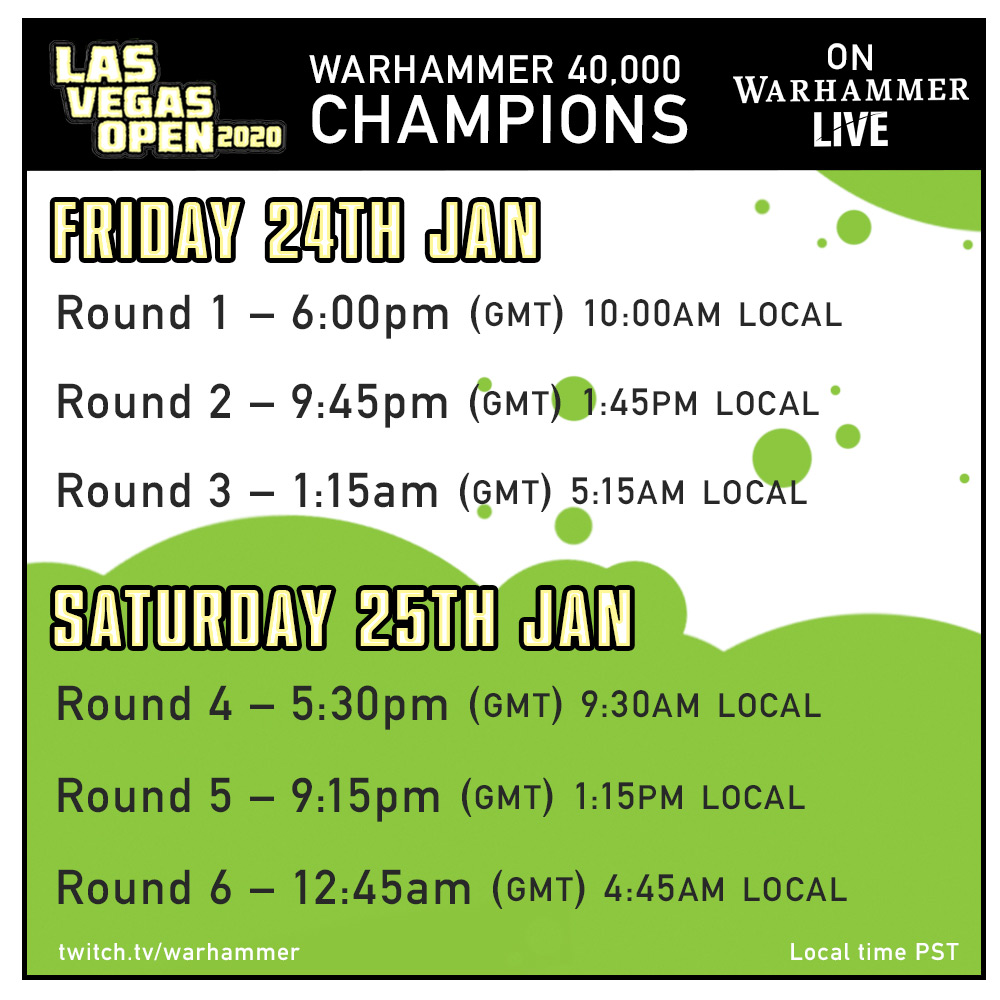 Coverage will be on Warhammer Live from Friday. Don’t forget that you can watch along live for free or subscribe and catch up on demand.

Well, AdeptiCon will definitely be too late for anything related to Saga of the Beast, so if Orks are going to show up, it's likely to happen here.

They definitely blew the lid on Shadowsun early, so if they revealed the main model for February/The Greater Good way before Ritual of the Damned was even out, I suspect they may have done that for a reason. The reason being that the next Studio Preview, this one, would be covering the next installment of Psychic Awakening, and/or something juicy.

AdeptiCon is likely to cover the Age of Sigmar and Warhammer 40,000 summer schedules; so anything ranging from new army teasers to a new edition.

There is? What is it? I'm drawing a blank.

im hoping for a look at primeork ghaz, primaris ragnar (or whoever the wolves get), an answer on whether the orks are getting a new skarboyz unit to go with the rumour images (boot, etc.) in some kind of battlebox and maybe if we're lucky a sneak peek or hint at emperors children

I know GW tend to overhype these things, but what "Equally huge news for Warhammer 40,000" could possibly live up to the level of an entire new faction (and arguably one of the longest-awaited ones too) for AoS? Have we had anything to suggest a brand new faction on the way which has flown completely under the radar? Seems unlikely.

https://i.imgur.com/YxV2bFv.png <-This is what the Warhammer 40k setting is about.

It's been a while since they showed the Archaeopter, they gotta show off the rest at some point.

The timing always made sense that Adepticon would cover whatever's coming this summer (rumored new starter set / 9th edition in June-ish, the next "bike and speeder" Primaris wave rolling out after that). So I could see the LVO going beyond just teasing PA Book 6 and giving a look at whatever's coming up in the concluding set (trilogy?) of books just prior to summer.

Maybe we'll just get a look at another AdMech unit, like the airborne squad that actually fits the batwing from the rumor image, since we know those don't match the Archaeopter's wings, but would slot on perfectly to the shoulders of its pilot.

EDIT: Late to the party by a couple of seconds. Bring on the AdMech already.

Oh, c'mon now, you can think bigger than that.

It's clearly a wolftime Russ returned from the EoT at the head of new wolfkin units fighting against a new primarch-sized Ghaz on Armageddon.

Plastic catachan would be pretty huge from my point of view. I think it's likely to be something fairly modest though like a silhouette of the next space marine character to cross the Rubicon. I do wonder if we will see titanicus and necromunda teases though as they were absent from the new year open day.

I know GW tend to overhype these things, but what "Equally huge news for Warhammer 40,000" could possibly live up to the level of an entire new faction (and arguably one of the longest-awaited ones too) for AoS? Have we had anything to suggest a brand new faction on the way which has flown completely under the radar? Seems unlikely.

About the only thing would be new primarchs for both Chaos and Imperium dripping at the same time. Which is 100% never going to happen.

GW has taken the brakes off the hype train again, expect complaints when it turns out to just be a preview of an upcoming PA book.

i think this will be Age of Sigmar reveals Hysh Elves. that model siloughette is clearly Divine Teclis.


I don't think there's any doubt; the New Year Open Day already had a video teaser for "pointy Aelves" which directly referenced artwork of Teclis.

Anyway, best move on from this before it gets melta'd; the point I found interesting was the reference to 40k news on the same scale as this reveal which we already know is really quite major.

I hope they show Catachans or new IG infantry kits because after SoB they are one of the older plastic kits along with Orks. I hope to see the new Primaris bikes as well, depending on their role I might just build an Outrider of them.

++NO PITY.NO REMORSE.NO FEAR++
++Light your way in the darkness with the pyres of burning heretics.++

Man, I would love a new DG character that buffs Plague Marines ie reroll hits and maybe some other cool thing.

Man, I would love a new DG character that buffs Plague Marines ie reroll hits and maybe some other cool thing.


Just add +1 T and DR to our chaos lords

"You are my unbroken blades. You are the Death Guard. By your hand shall justice be delivered, and doom shall stalk a thousand worlds."

There is? What is it? I'm drawing a blank.

Not sure it's in March but Adepitcon is quoted as GW as the "Biggest studio preview ever seen before" or something to that effect from the Adepitcon studio preview page text on the Adepticon website.

I think we will see the AoS teclis elves, and maybe the upcoming stuff for Necromunda, and the next Blood Bowl team. Perhaps from Aeronautica stuff as well. Not much for 40k though.

Yeah I am not getting hyped for that. Been there done that.

All I am hoping is there will be some pics of the new Pointy Aelves for AoS.

The pointy elves are the one thing they've said are absolutely gonna be a reveal. They had a whole article basically just to plug how it'll be Teclis and "much, much more" at LVO. But anyway, that's not relevant to the discussion.

Not sure it's in March but Adepitcon is quoted as GW as the "Biggest studio preview ever seen before" or something to that effect from the Adepitcon studio preview page text on the Adepticon website.

I was asking about the other Preview in February Joe was referring to, since I don't recall any other event taking place between LVO and AdeptiCon.

"Mmmmmmmmmmmmm only the FINEST of foil here, sir, hmmhmmm yess.

I'm not going to get hyped for anything GW themselves declare as huge news either. Last time it was something we've already known about anyway. Their definition of huge is vastly different from what the rest of the world defines as huge.