250 replies to this topic

Also I tried googling it but I can't seem to figure it out. Is there a certain amount of posts you need to have in order to be able to upload pics? Here's the imgut album anyhow. There should be a few snaps of the other memebers though they are from from finished.
https://i.imgur.com/l15vkSQ.jpg

My Knight Errant Scouts are on a mission on a deathworld 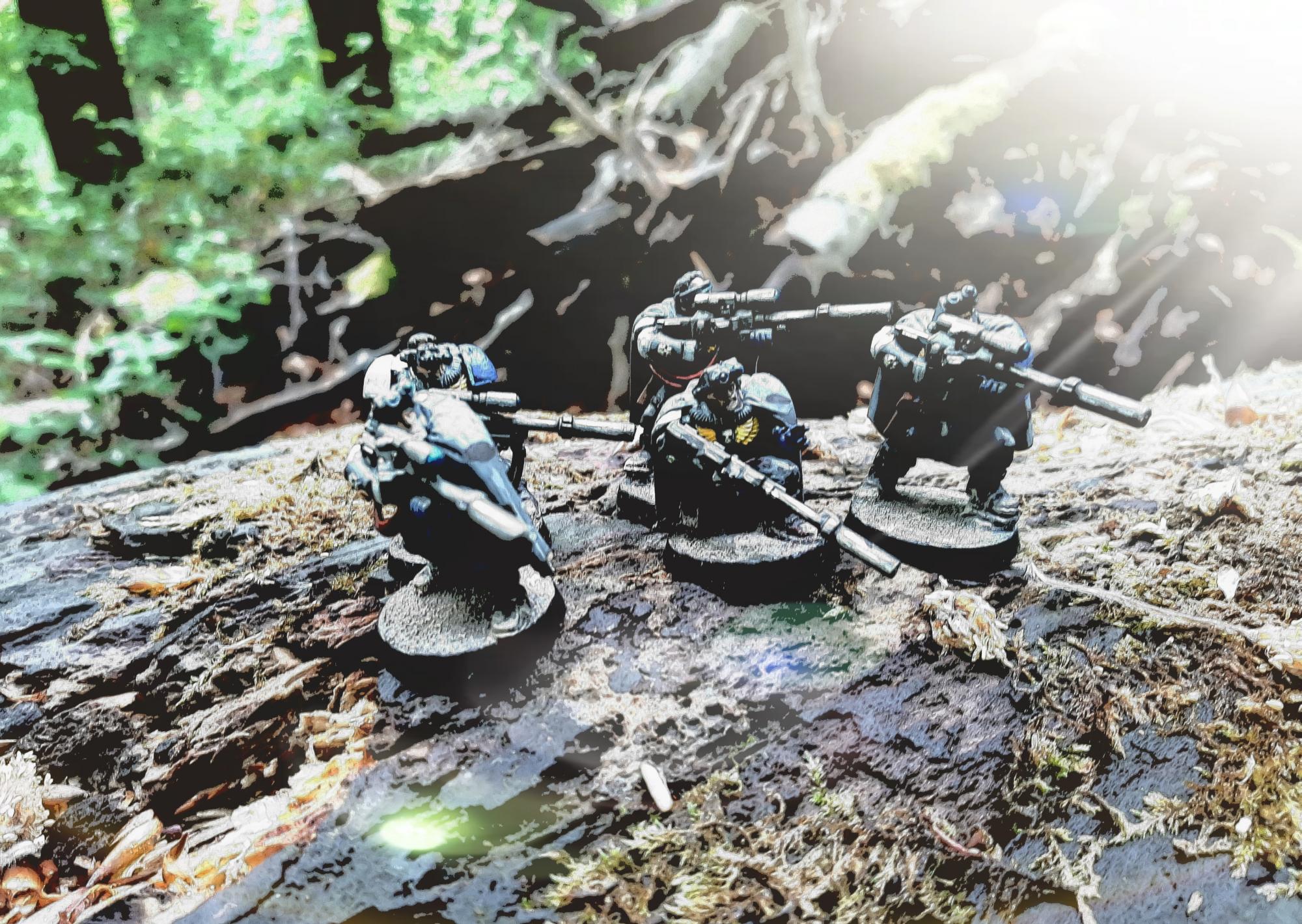 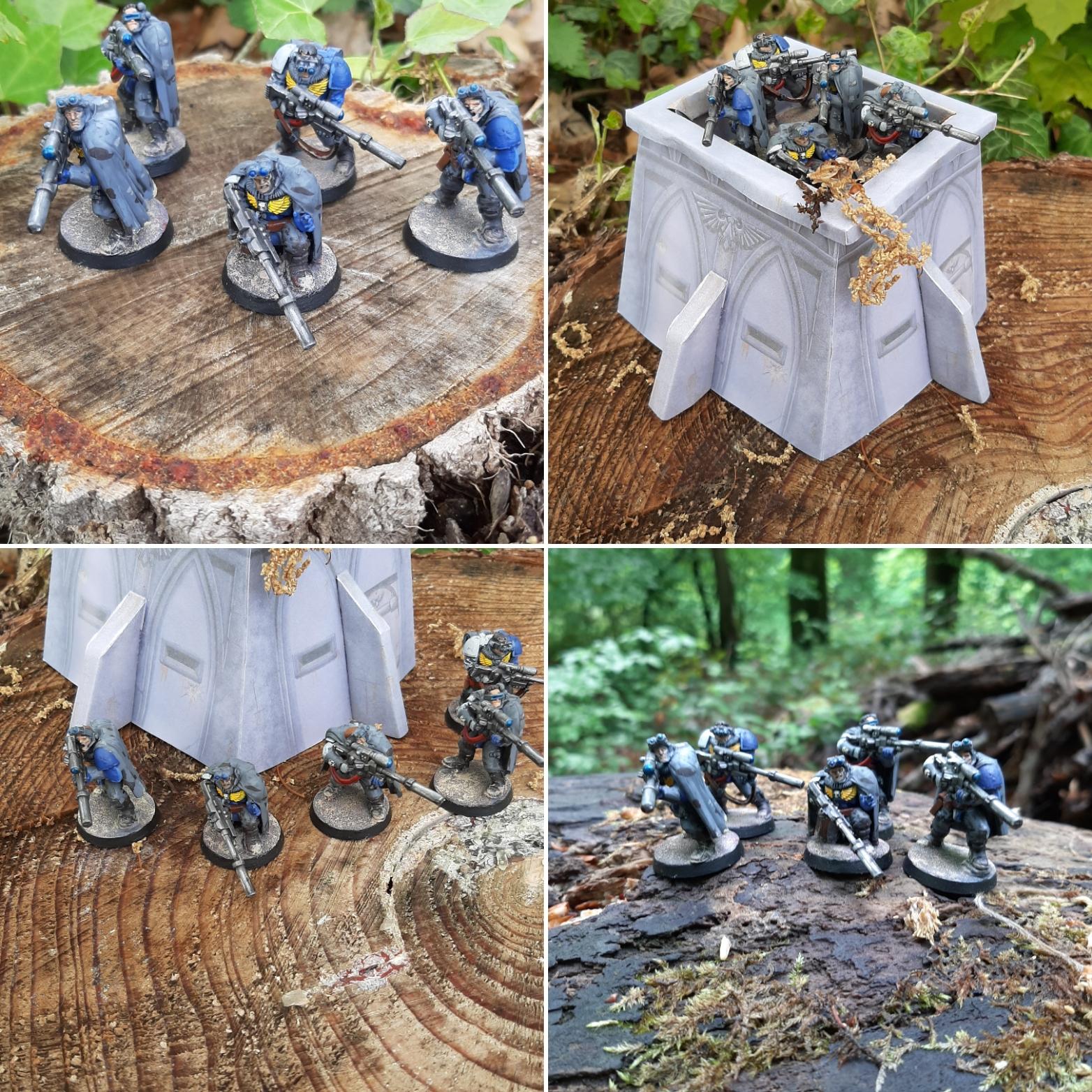 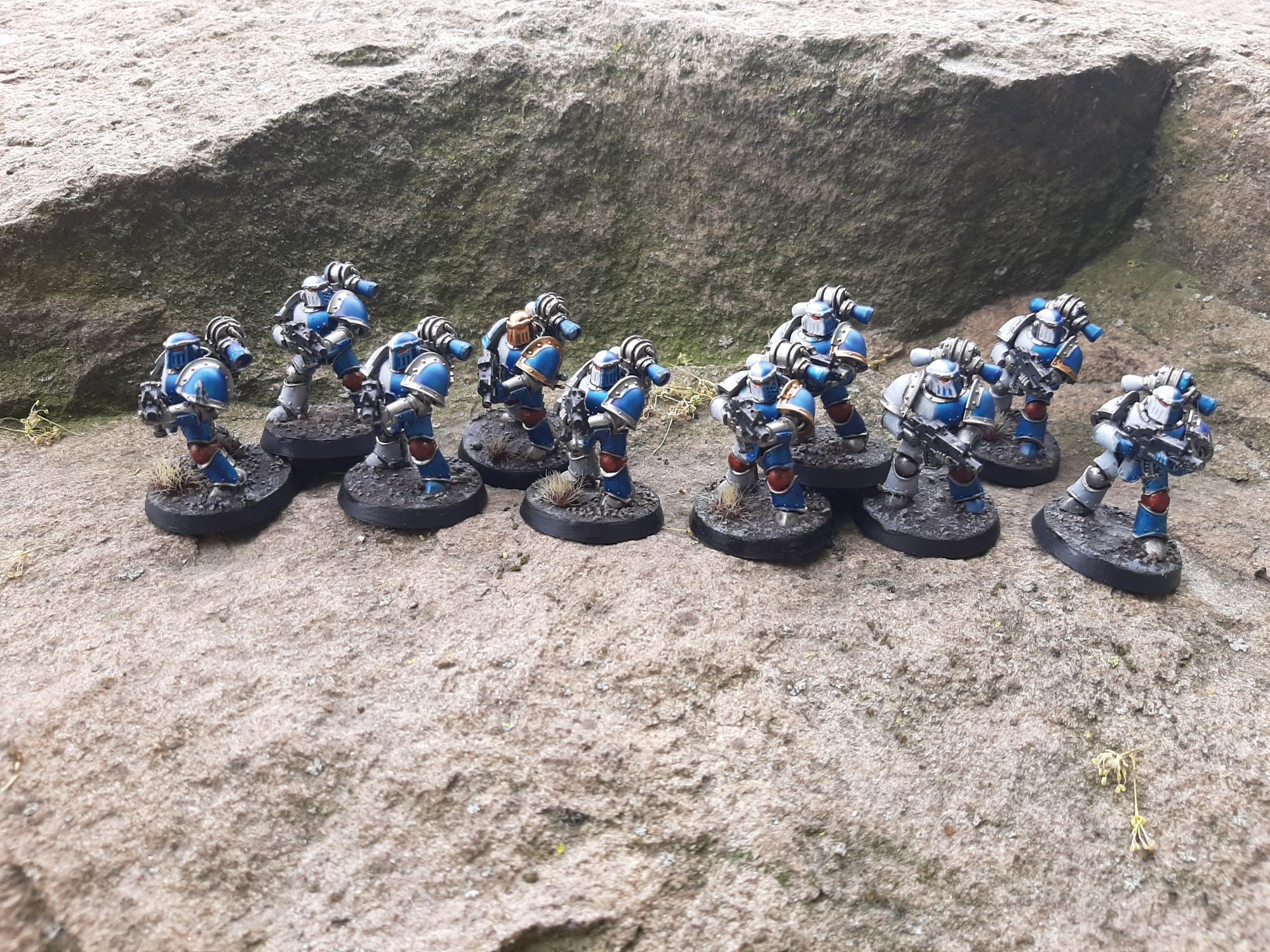 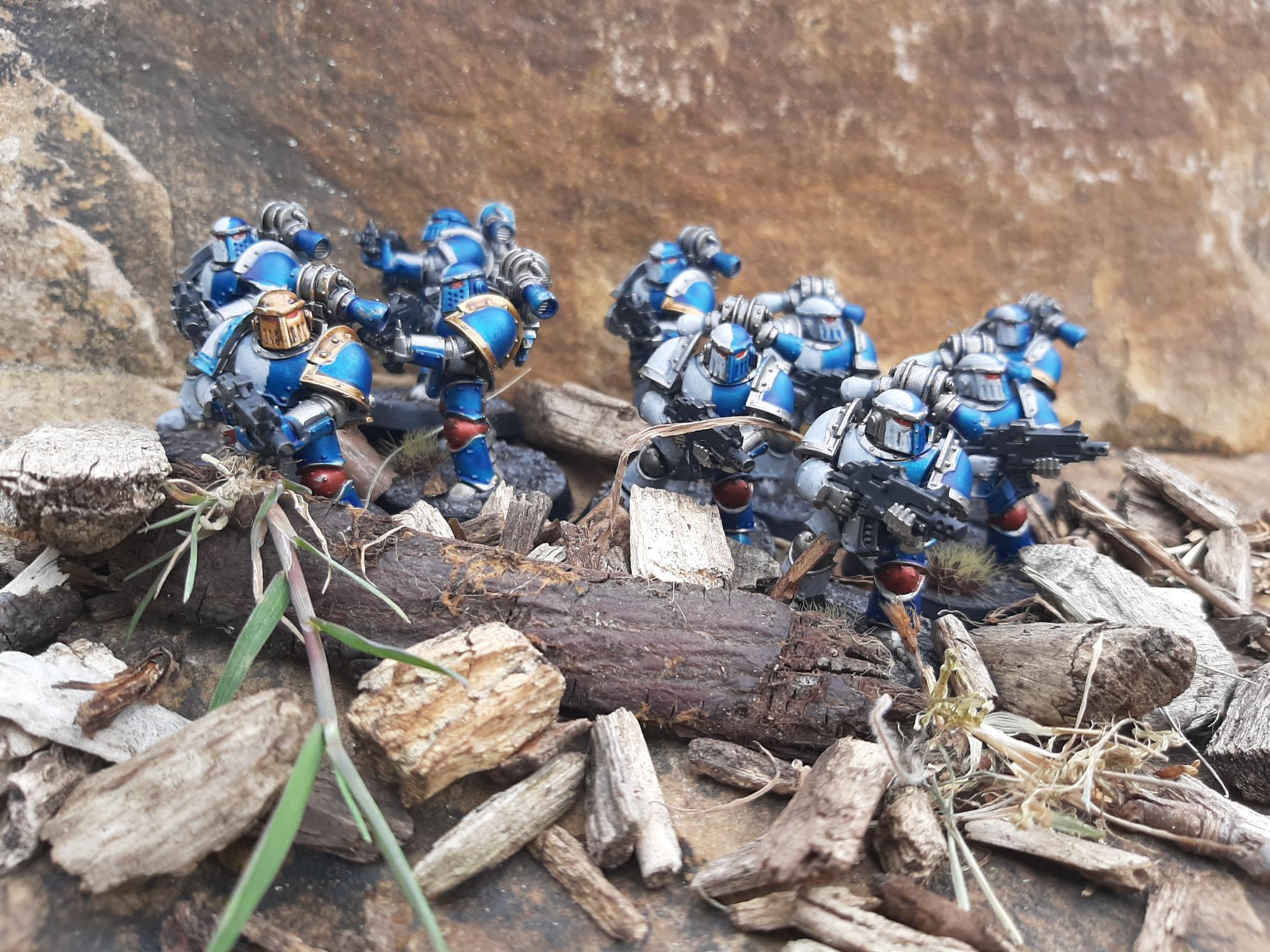 Some good progress Chaoself. I spent tonight doing some green base coating on my Mantis Warriors, but nothing really worth an update yet.

Oh wow, I had no idea this was happening, the Badab War is my favourite bit of 40k lore!

I did a Lamenters 'Kill Team' (just 5 models) last year. Maybe it's time to add a couple more!

I did a project log for them at the time, maybe if I add more I could revive that thread.
http://www.bolterand...m-slow-project/

I always liked those Lamentors BBJ. It would be exciting to see you return to them.

Just a quick update to show I'm making some progress on my Mantis Warriors. 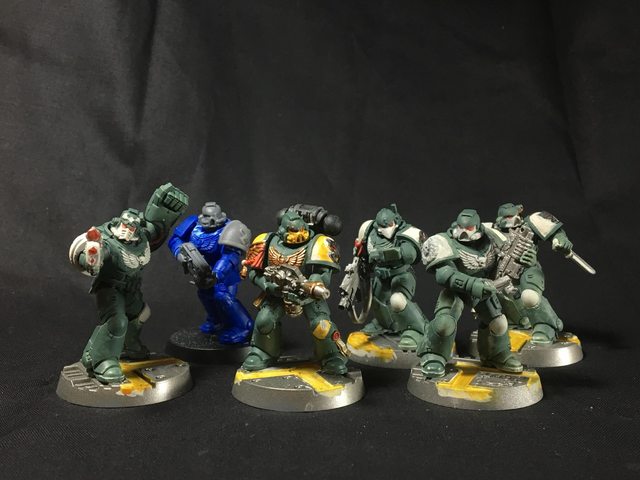 How is everyone else getting on?

Not much right now.

I'll pick up 5 more Marines for the project today though.

Okay, almost done the astral claws part of my kill team.  Here they are: 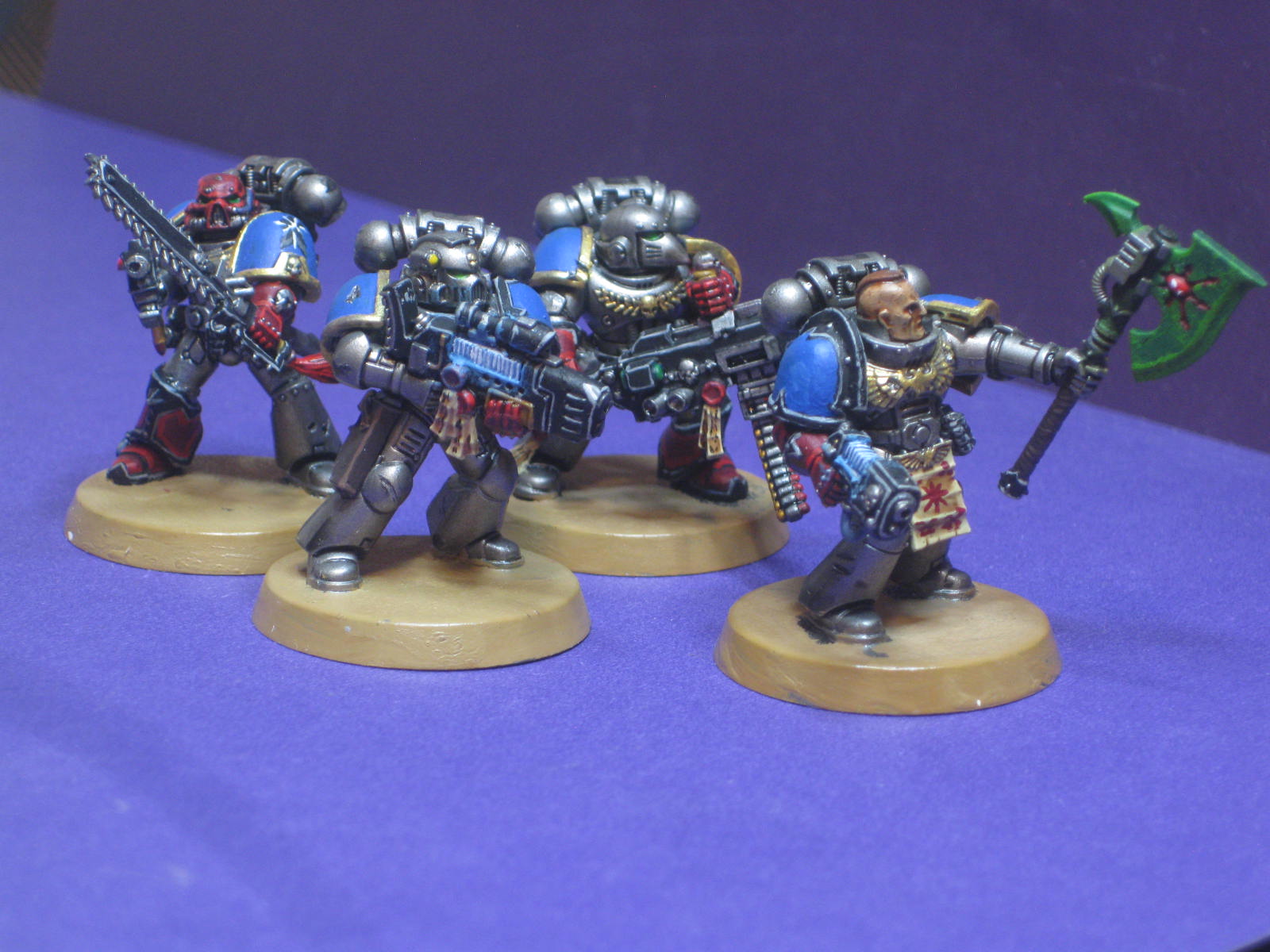 I wanted to depict them as late war pirates, already operating out of and being supplied from the maelstrom - so, as kind of proto-red corsairs.  I've tried to depict this by mixing imperial and chaos marine parts, putting battle damage on the imperial parts, and doing the chaos parts red with black trim to show what they are to become.

However, I need some help:

1.  What colour should I do the exposed armour where it has been damaged (bullet holes, scrapes, etc)?  Normally I would do it leadbelcher, but astral claws armour is painted that colour so that doesn't really stand out.

2.  What squad/unit markings should I put?  I have the Claw's "grasped star" icon on the left shoulders, but am not sure what to put on the right for their squad marking?  Do they follow the codex astarted "arrow for tactical" etc. markings, or some other methodology?  Should they have symbols or numbers on their knees and/or greaves?  Any guidance would be great.

3.  Do you think the close combat models (the sergeant with power axe, or the red helmetted squaddies with the chainsword) should be given some blood splatter?

The Astral Claws are well-painted.

I'm going to have to extend my deadline as I'm waiting on Intercessors to finish my truescale kill team. I'll have photos of the ones I have made already soon

Oh wow, I had no idea this was happening, the Badab War is my favourite bit of 40k lore!

I did a Lamenters 'Kill Team' (just 5 models) last year. Maybe it's time to add a couple more!

Great, someone else that paints Lamenters better than me :-)

Okay, almost done the astral claws part of my kill team.  Here they are:

These are looking good, cool idea of mixing in chaos marine bits to show the progression to renegade.

I myself have been distracted by yet another hobby more expensive than 40k; I recently acquired a unification era land car.

There has been some progress, I attempted a colour scheme but wasn't convinced by it:

Tried another scheme that I was much happier with:

And am now in the process of getting the rest blocked out with the base colours:

The Astral Claws are well-painted.

These are looking good, cool idea of mixing in chaos marine bits to show the progression to renegade.

Thanks Mr. Yellow - I'm glad it seemed to work out.  I quite like the tan for your imperial army models - it will look quite nice with black, grey or white armour. 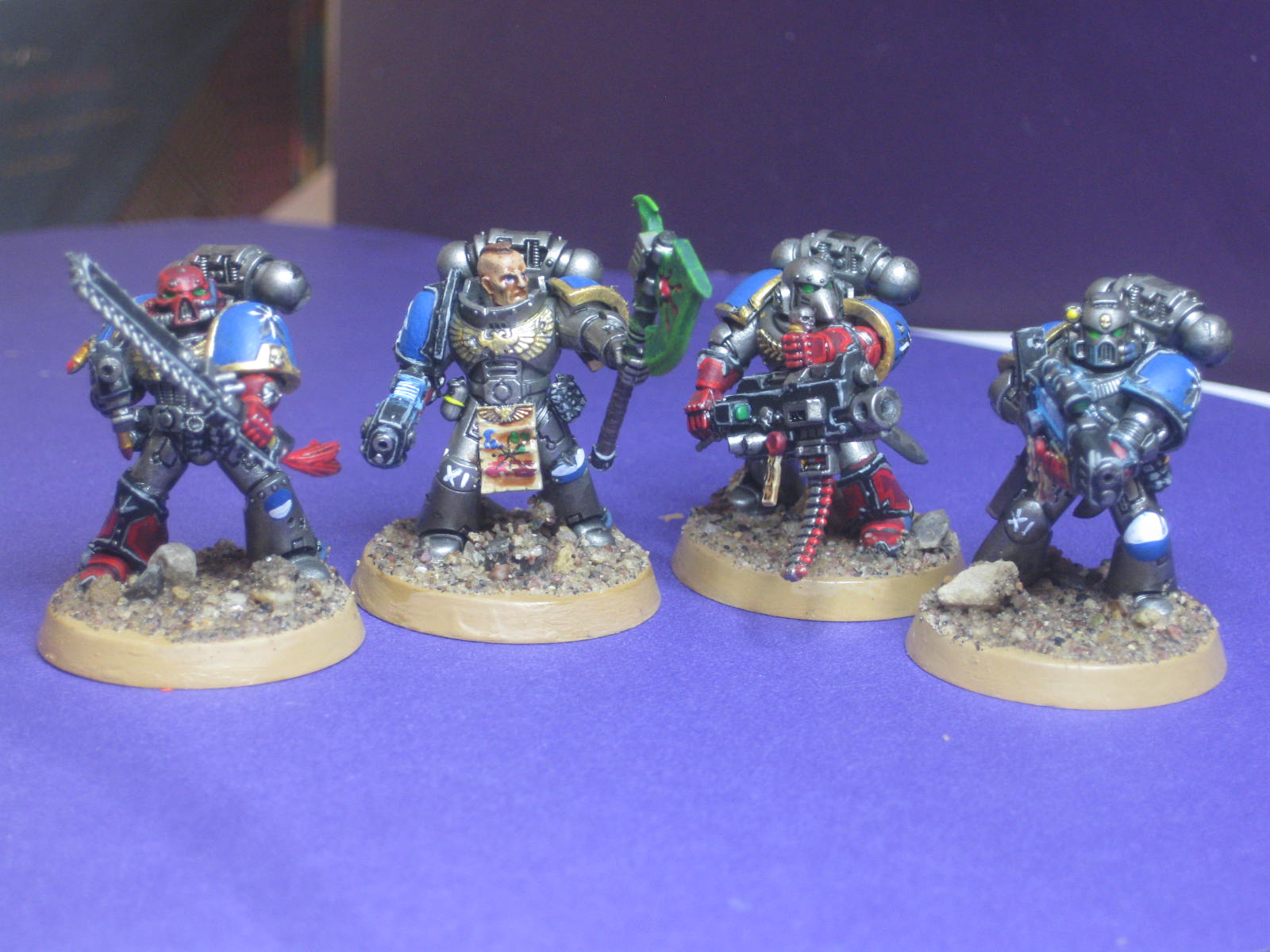 Given my uncertainty to what were the proper unit markings for the Claws, I used basic codex/ultramarine style.  I'm really happy how they turned out - I've never had any success freehand painting the "tactical squad arrow" before, but this attempt turned out really well as did the tiny roman numerals. 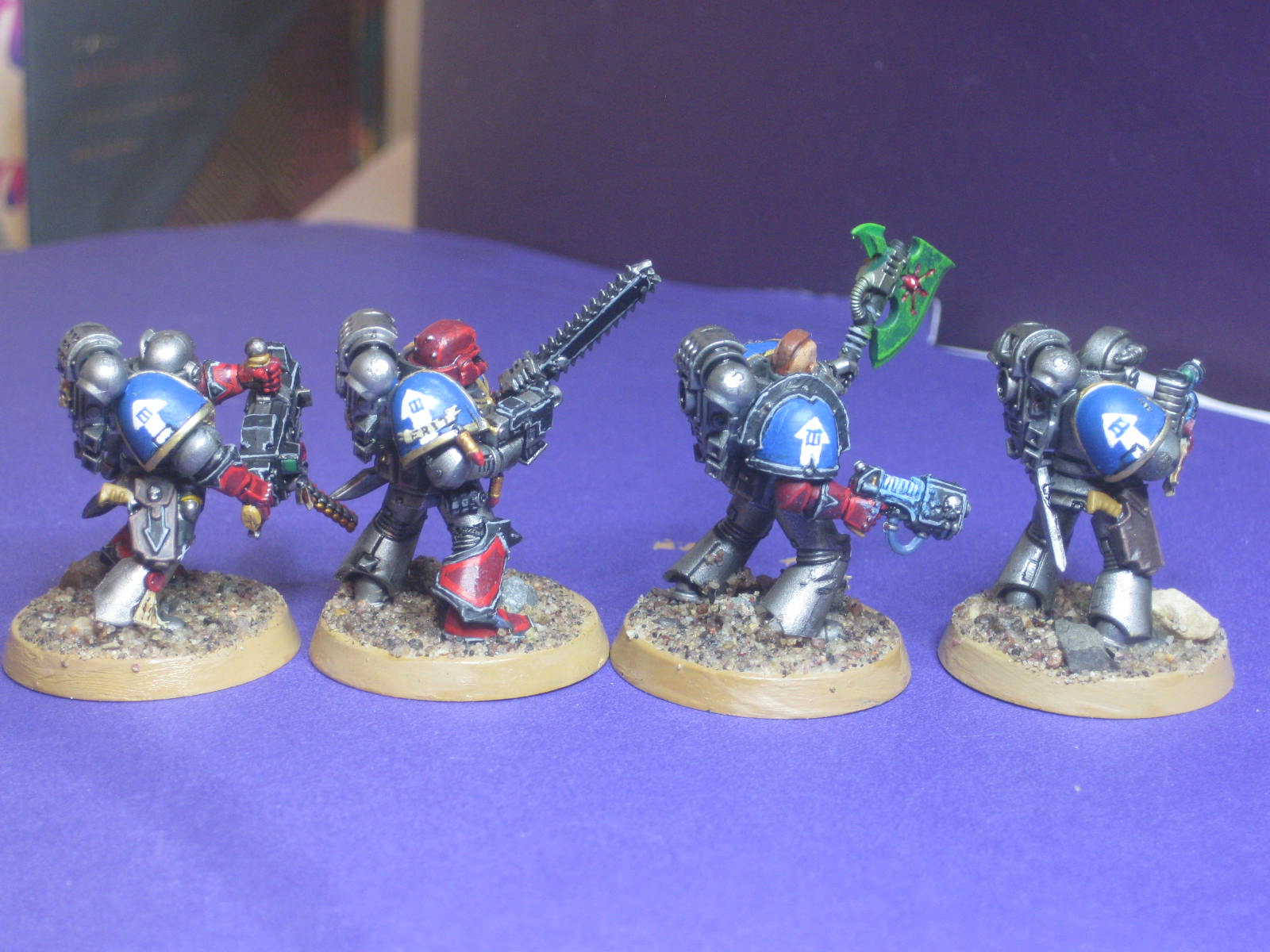 That finishes off my killteam and my vow - here's a picture of the whole team: 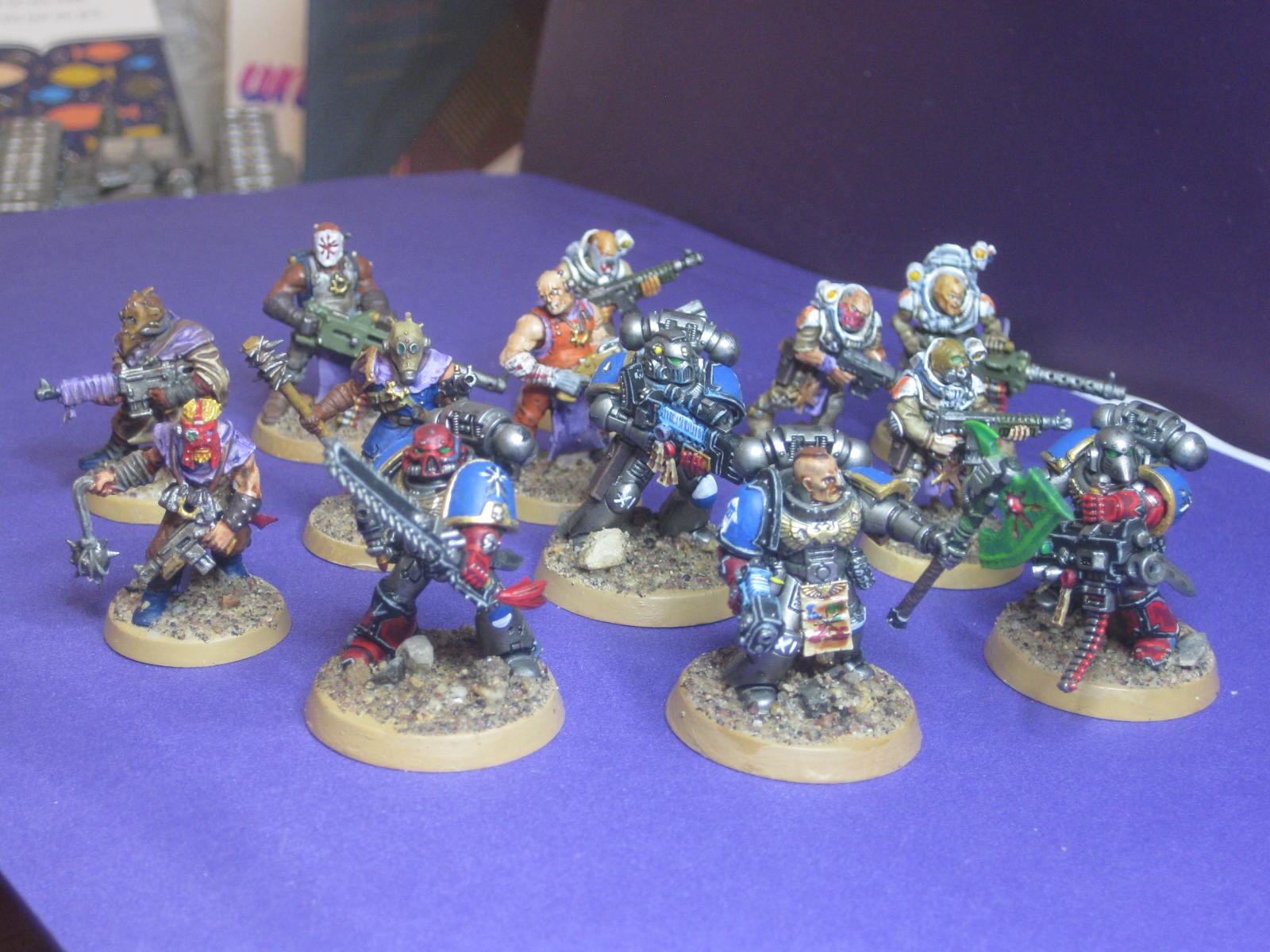 Excellent work on the models.

Hey Dosjetka, I would really like to get involved with this as I have always found the badab war setting incredibly interesting. I have, however, vowed myself to concentrating on Aeldari this year. Would I be able to join in with a harlequin kill team? I notice xenos is an option and I figure it wouldn't be unheard of for them to knock around with Corsairs or Durkhari raiders. No worries if it's not appropriate.

Cracking. I'll get on thinking about a suitable storyline for them and get them pledged.

Here  my next 5 Marines for the Marines Errant. 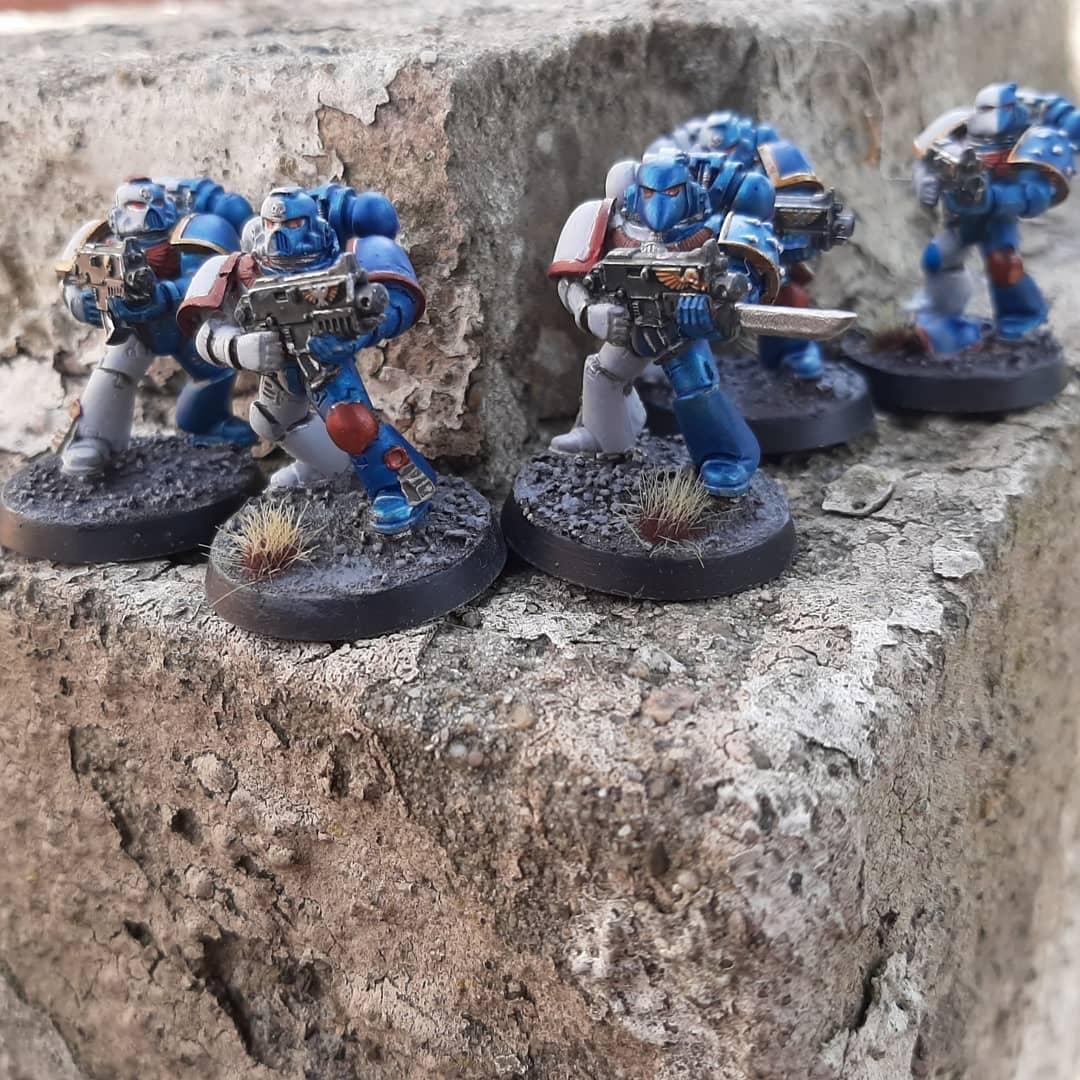 Here  my next 5 Marines for the Marines Errant.

Thanks Chaoself.  Your kill team is looking great too.

The bayonet is a good touch. Was it kitbashed, or did it come with the kit?

It is a kitbash. I cut down the handle and Glied the onto the bolter.

Nice to see some traffic in this thread.

I've been chipping away at my Mantis Warriors. I'm a decent way through the first five and got the remaining two team members assembled. Still need to add washes and highlights (and their powerpacks) but they're definitely moving in the right direction. 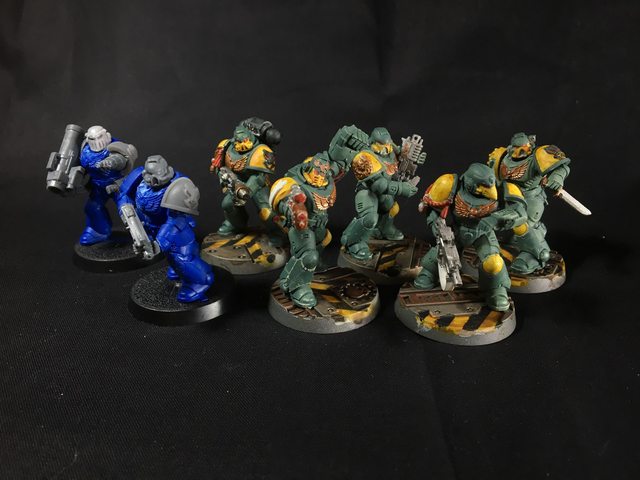 The original plan with my Badab stuff was to make four separate Kill Teams (two per side) so I could run some narrative games with my friends. I wanted to choose a basing scheme which is consistent across all four teams.

I wanted something which worked for 25mm, 32mm and 40mm bases, which wasn't too time consuming, so I've stuck with my Necromunda themed hazard stripe bases.

Since the eventual plan is to run two boards side by side for multiple games (where I can change the terrain throughout) I decided I'll also need to get some more terrain painted up. 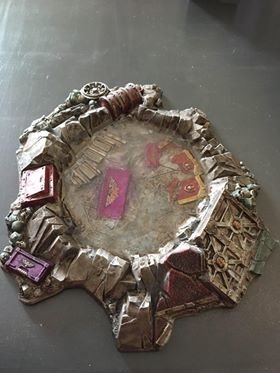 This is one of the old modular craters, which came in two halves. I've stuck it together and filled it with water effects. It was my first time properly using the water effects and I'm not actually that impressed with the product (Vallejo still water). My main complaints were that the drying time took longer than the advertised 24 hours and that it really isn't that good at self-levelling. The crater has four separate pours and the surface still isn't actually flat.

Still, it's good enough for tabletop standard and it should add some cover and flavour to my games. The eagle-eyed among you may find the Lamentors helmet hiding in the rubble.

I, Dwango, do swear to complete a Kill Team consisting of 1 shadowseer and 6 players from the Masque of the Soaring Spite who are committed to setting the weak and foolish Mon-Keigh upon each other and reveling in the destruction they bring upon themselves. The deadline for this will be 1st August 2020 and I shall do the utmost best to not fail my brothers- and sisters-in-arms.

General premise is that they have aligned themselves with corsair raiders to 'hone' their skills as well as to perform their dances for the raiders. All the while Delphian sows mischief and confusion amongst the imperial by enacting out an elaborate scheme shown to them whilst divining the future hundreds of years ago. They operate out of a number of webway portals hidden across the sector but mainly focus harrying trade routes through Endymion cluster.

Long time no see, everyone! Well, as much as I've been purchasing lots of Astartes, I've been pretty much a total slacker as far as even assembling them goes. I don't have much more to show than I did last time in the way of finished Marines, but I finally got around to messing with the wrapped wires I got from Zinge Industries and am pretty pleased with them. Check it out!

I'll be doing something similar for all 10 of my pledged marines, plus a few extras I may or may not get around to before the deadline. Love seeing all the work you guys are doing, keep it up!