Welkom to our awezom' blog

I've been wargaming since 2006, with WHFB's Battle for the Skull Pass. Bought that box, splitted it with a friend and ended up with A LOT of goblins

There's where it all started.

Played a lot with those gitz, until some guy at a tournament played a weird army against me, some strange dwarfs, with tusks and sexy, sexy tall hats... I was amazed. Sold all the greenies (sorry) and started hunting local markets, ebay, shops... for those evasive Chaos Dwarfs! In the end, managed to get 2000-3000 points of them, all originals and most of them in glorious metal.

Played them until the End Times, then tried 9th for some time and... Boxed them

Moved into Blood Bowl for quite some time, even travelling to tournaments abroad. But it didn't quite fill the void left by fantasy. By the mid of 2019 I decided to bit the bullet and start reading about 40k, never really interested me... Until I read my first story.

Bought a Shadowspear set with my former roommate, got all the loyal stuff, and another friend gifted me a Dark Imperium loyal part, and bought some more stuff I found cool by myself. I didn't knew about rules, what was OP and what was worthless... But decided that my favourite color is green, and wanted a 1st founding loyal chapter, so was between Dark Angels and Salamanders, ended up with sallies, and I'll make the same decision again now that I know a bit more about the game.

Then it hit me, there is something GREENER than Salamanders, something I know from WHFB, and something a very good friend has collecting dust in his attic. Some drinks later, we decided to trade one of my old WHFB armies (Dark elves) for ALL HIS ORKINESS

So that's how my still unnamed WAAAGH! started.

Well, here I'll post all my stuff, mostly orky, but sallies will also appear. So stay tuned if you want to see my stuff, be warned I'm not by any means a good painter, my stuff can be considered tabletop at best

- Rebase ALL the ork infantry (25mm to 32mm, and paint their base to give coherency to the army

- Re-paint all the painted stuff, to make them "mine"

- Attend a tournament/play a campaign. As friendly as I can do it, I don't wanna start on the competitive world again

Mandatory army pic, and closeups of some units 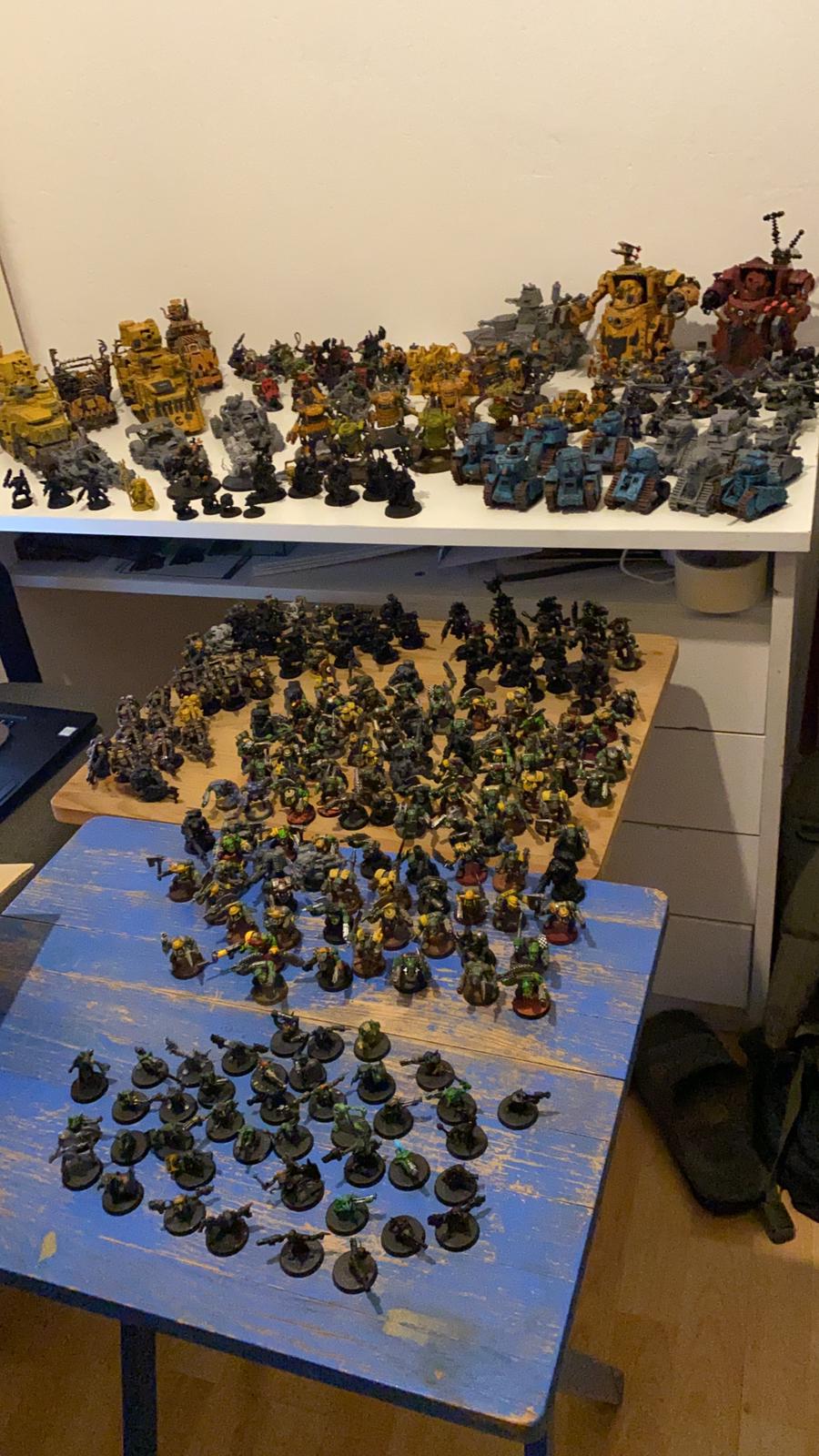 The characters leading the WAAAGH! 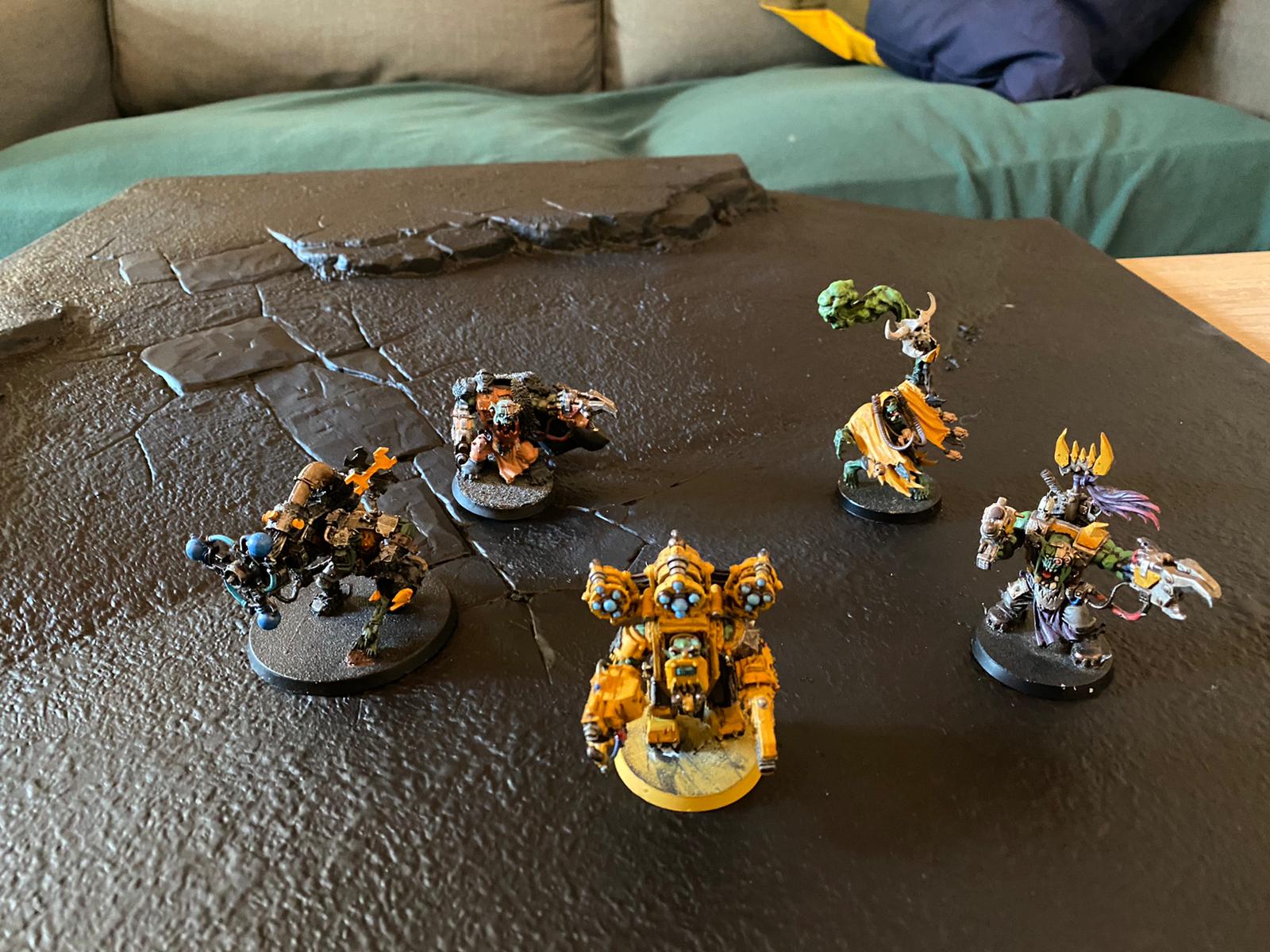 The angry dread, with magnetized arms 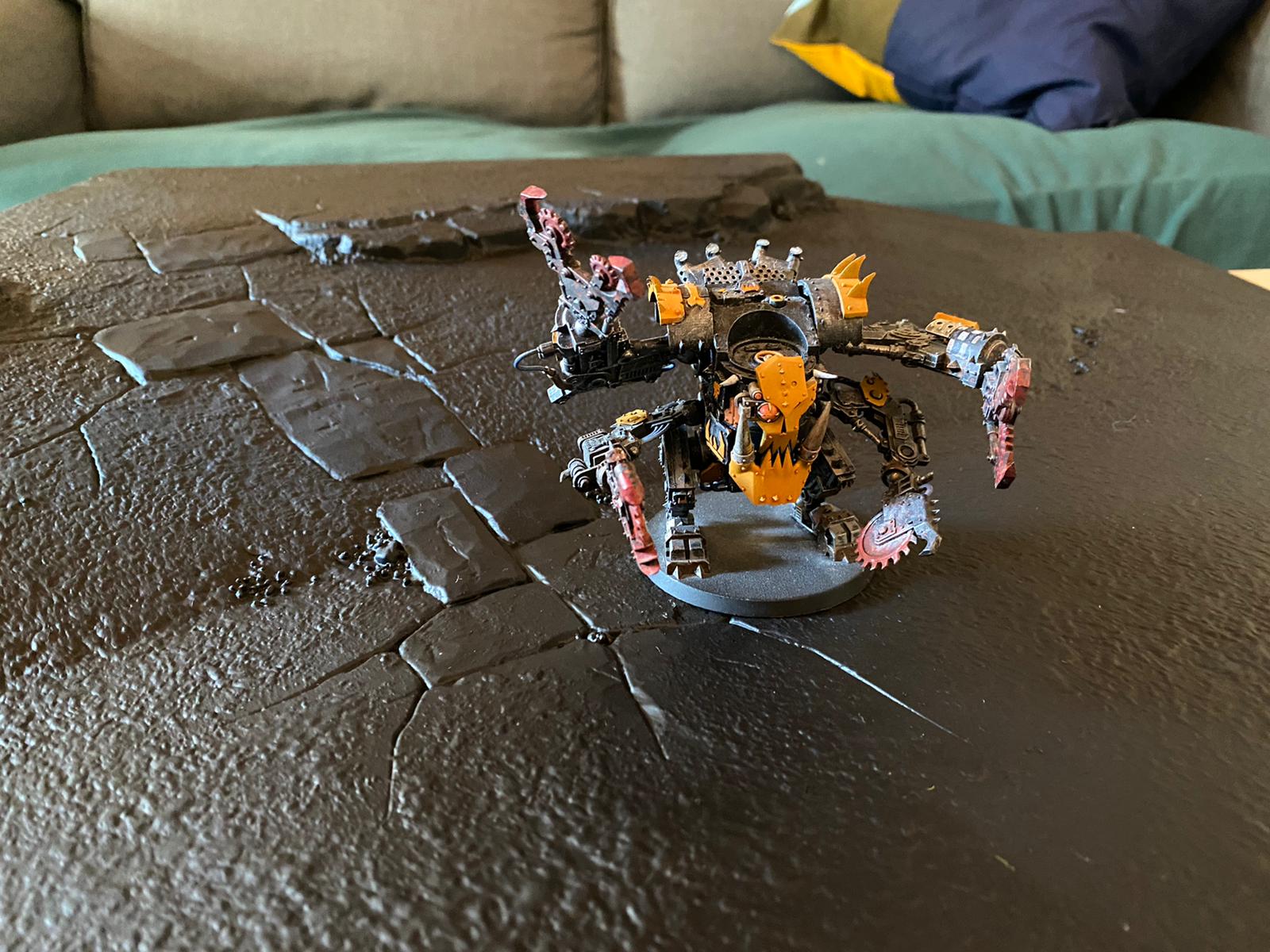 Killa kanz, in all their glory 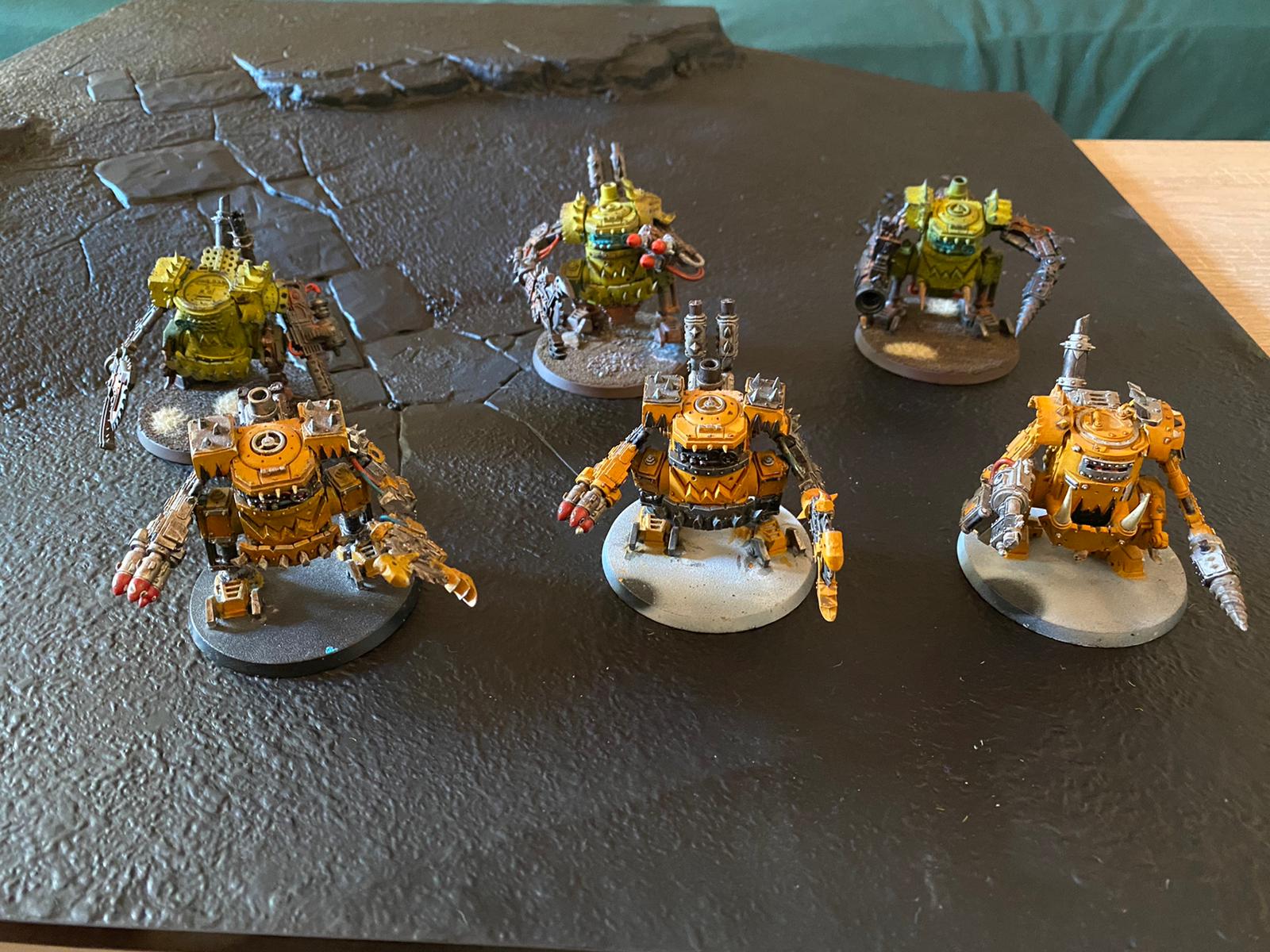 Big chubby giant orkz! Gorkanaut and Morkanaut (Never manage to remember which one is Gork and which one is Mork 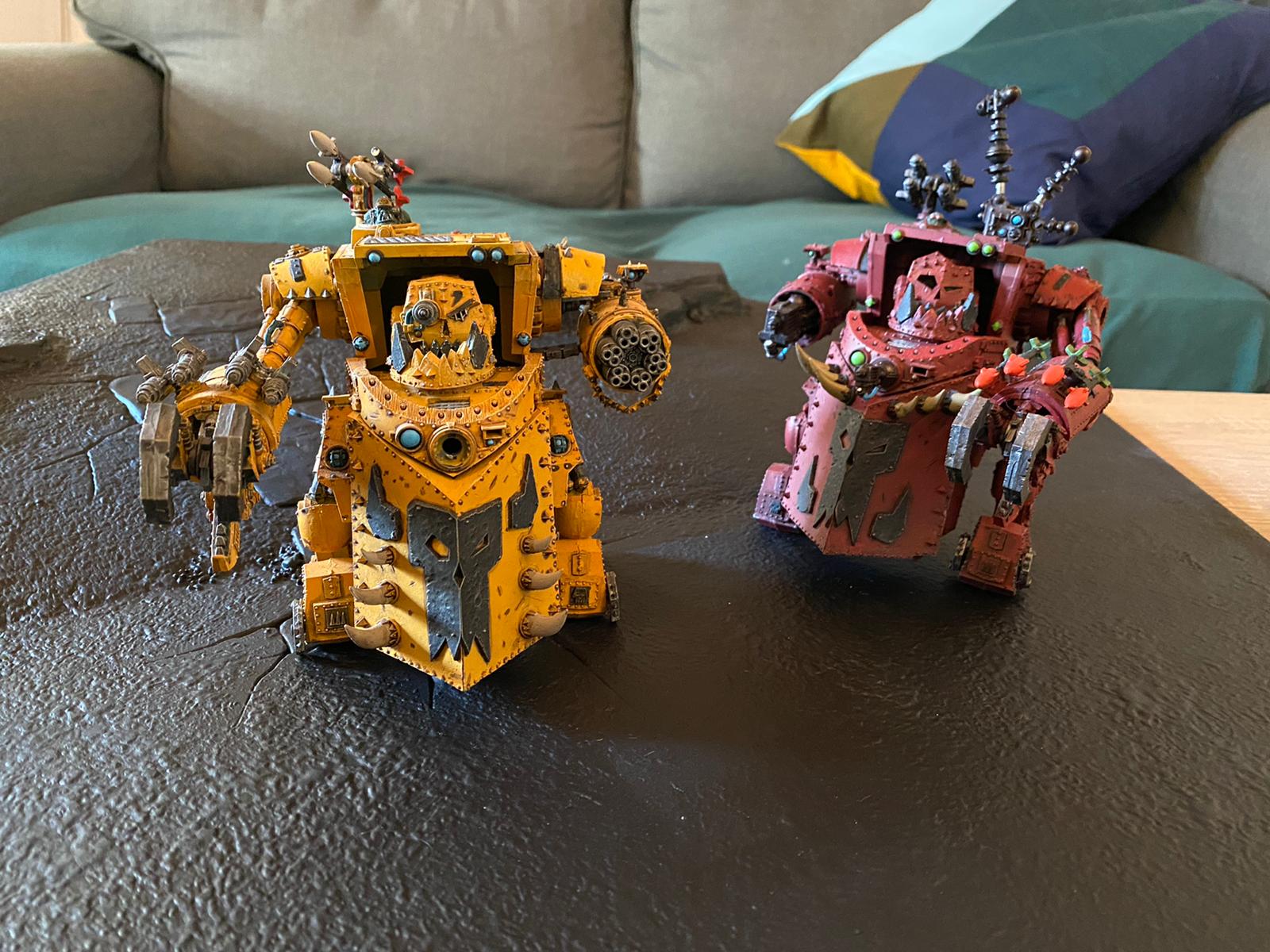 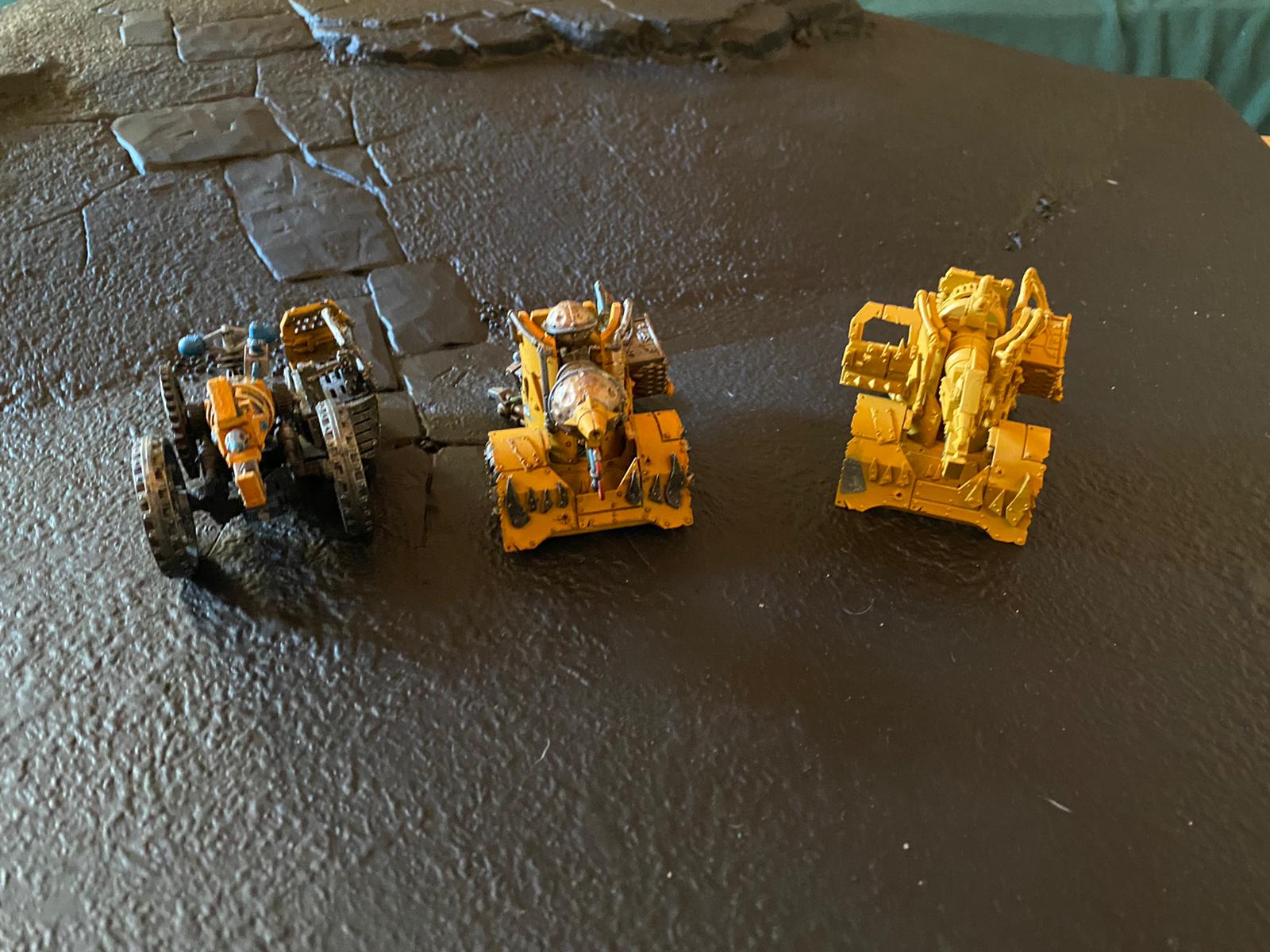 2 finished Koptaz, got another 2 in process 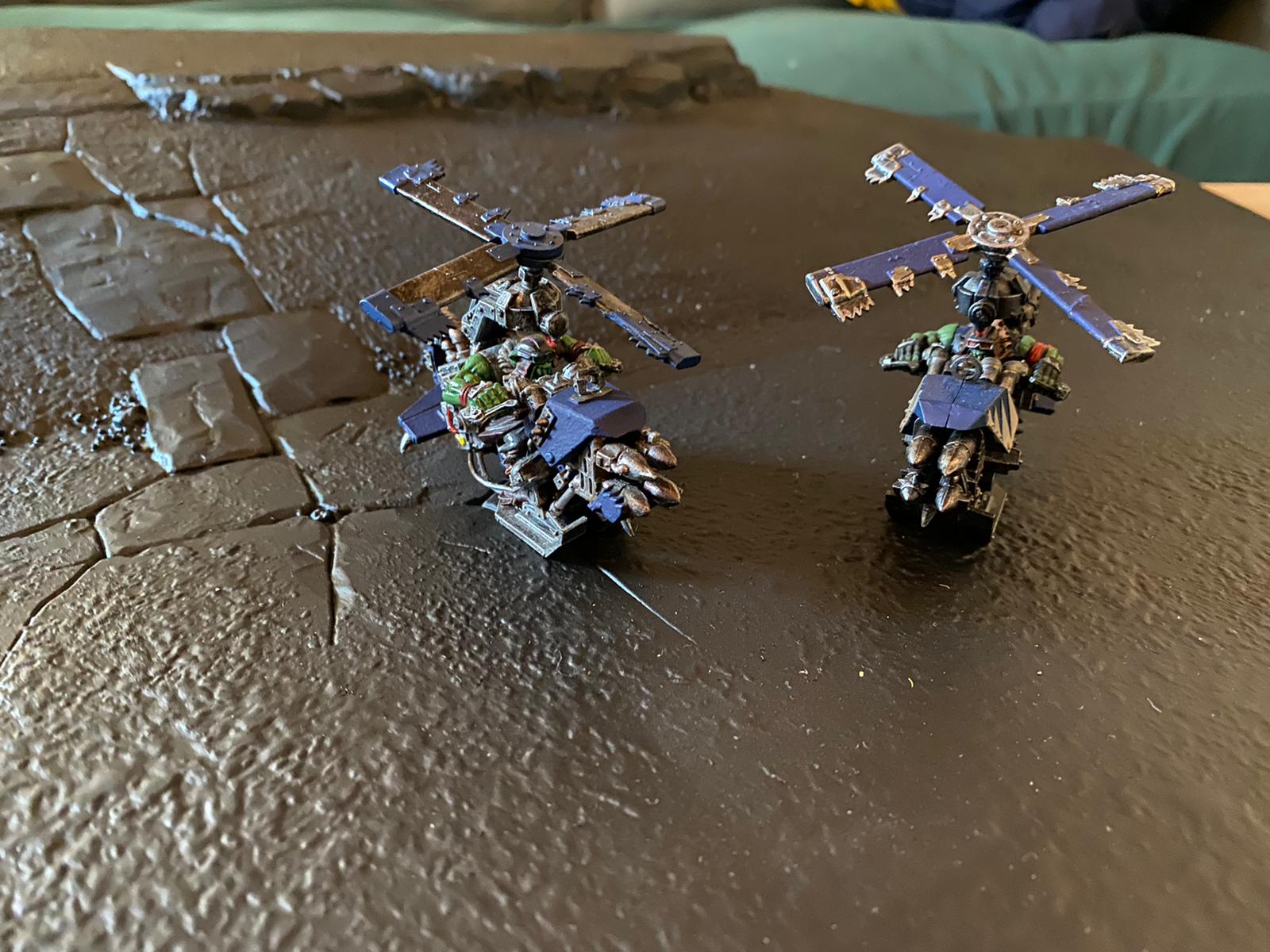 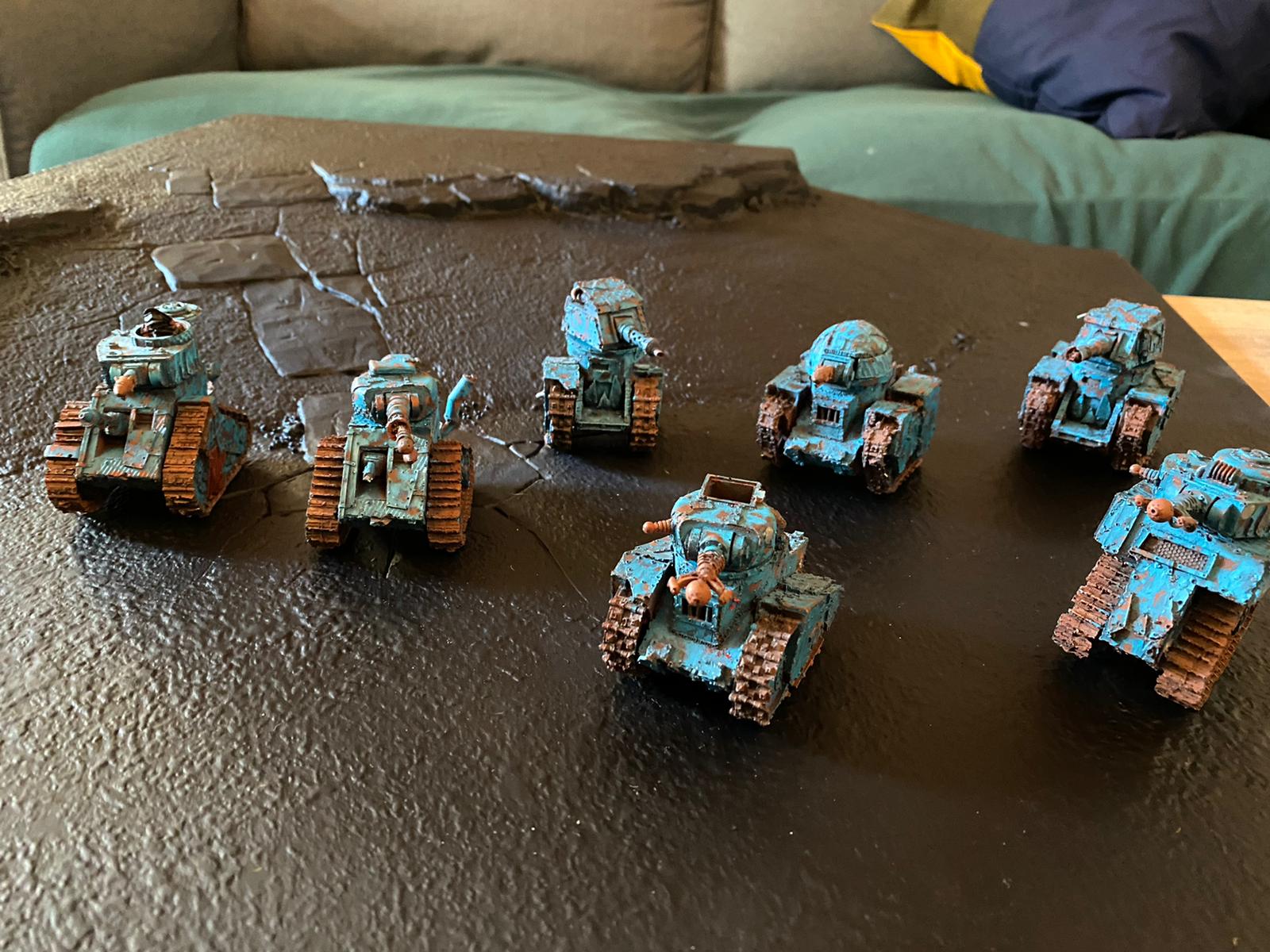 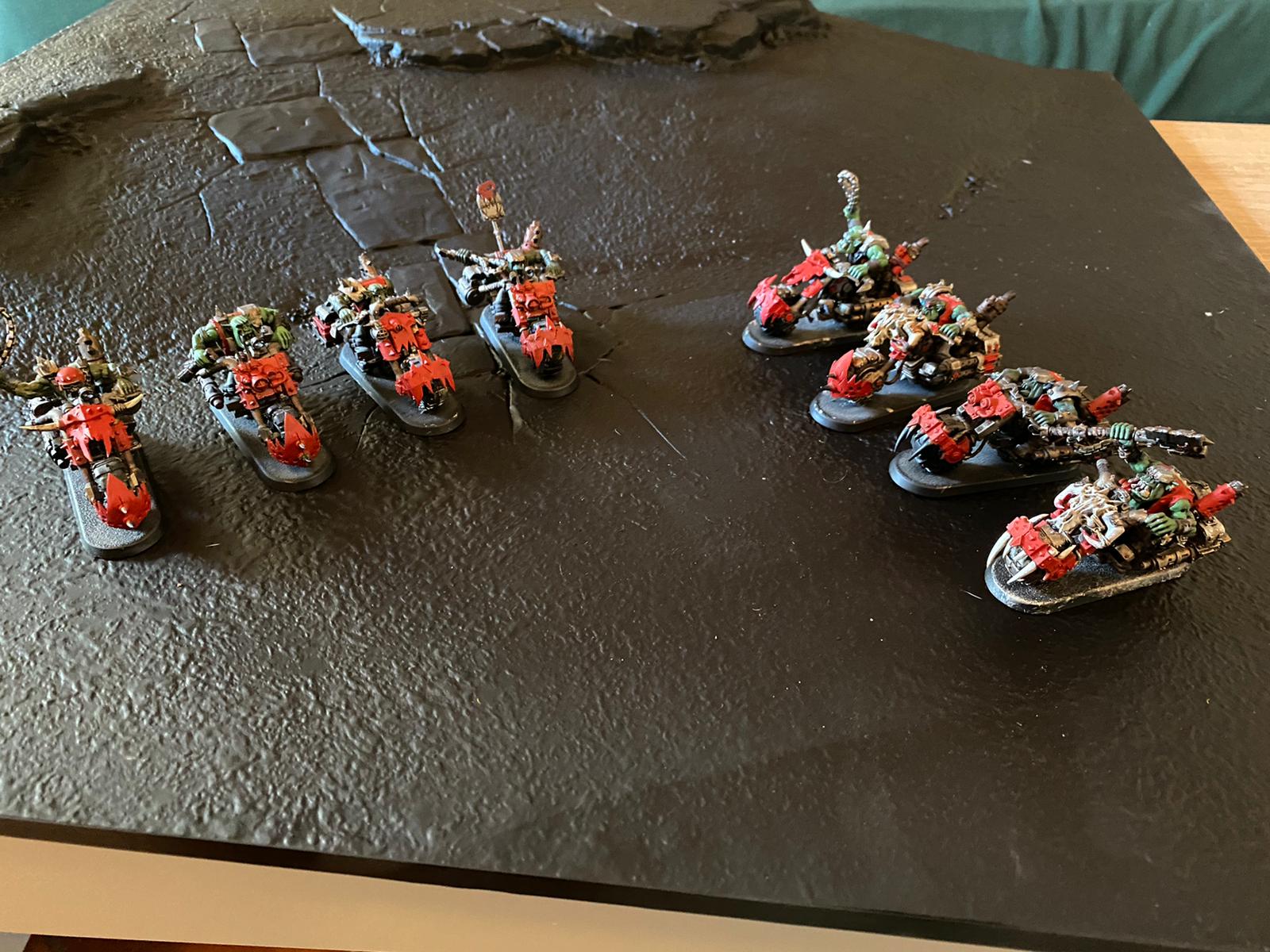 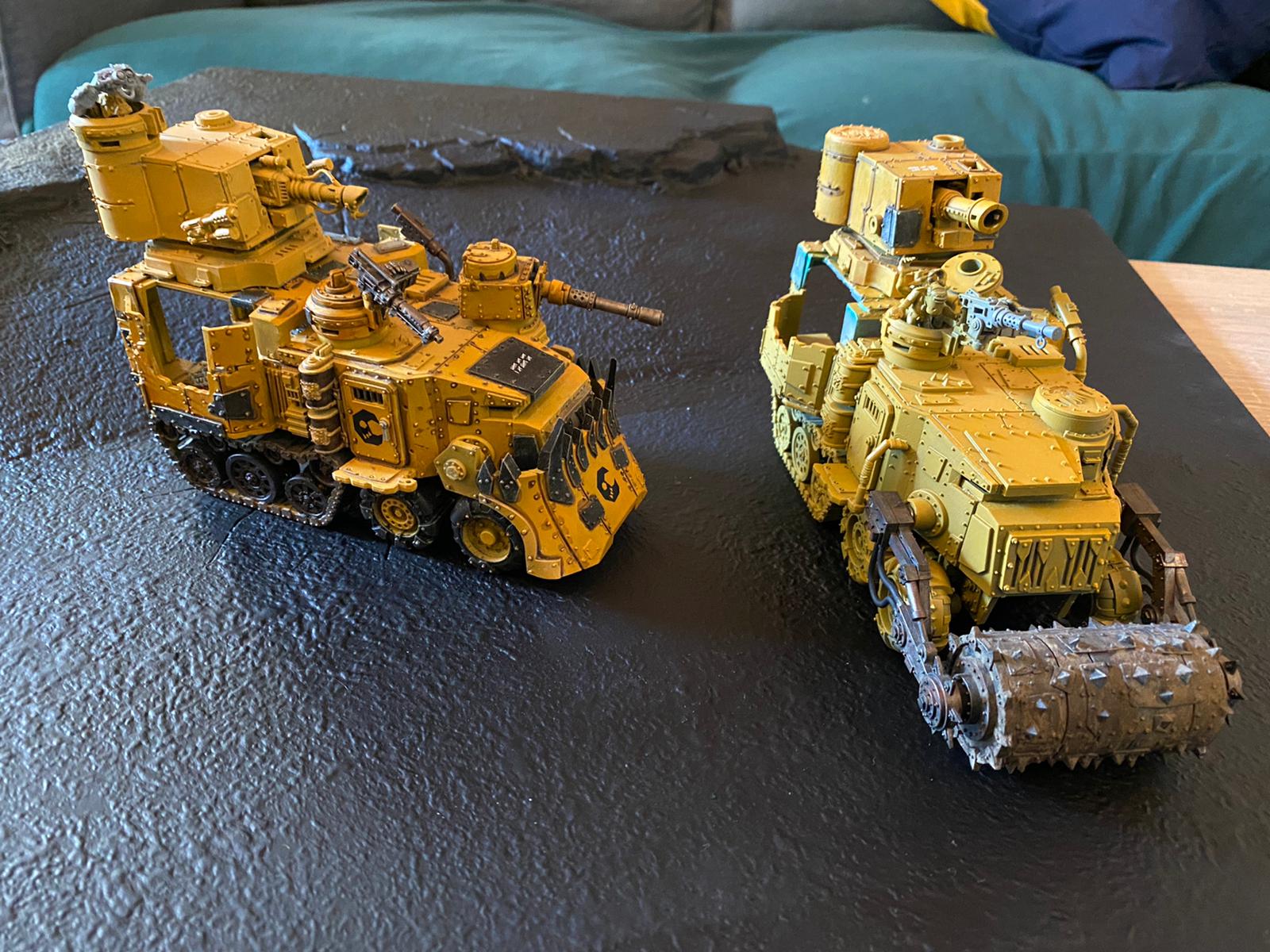 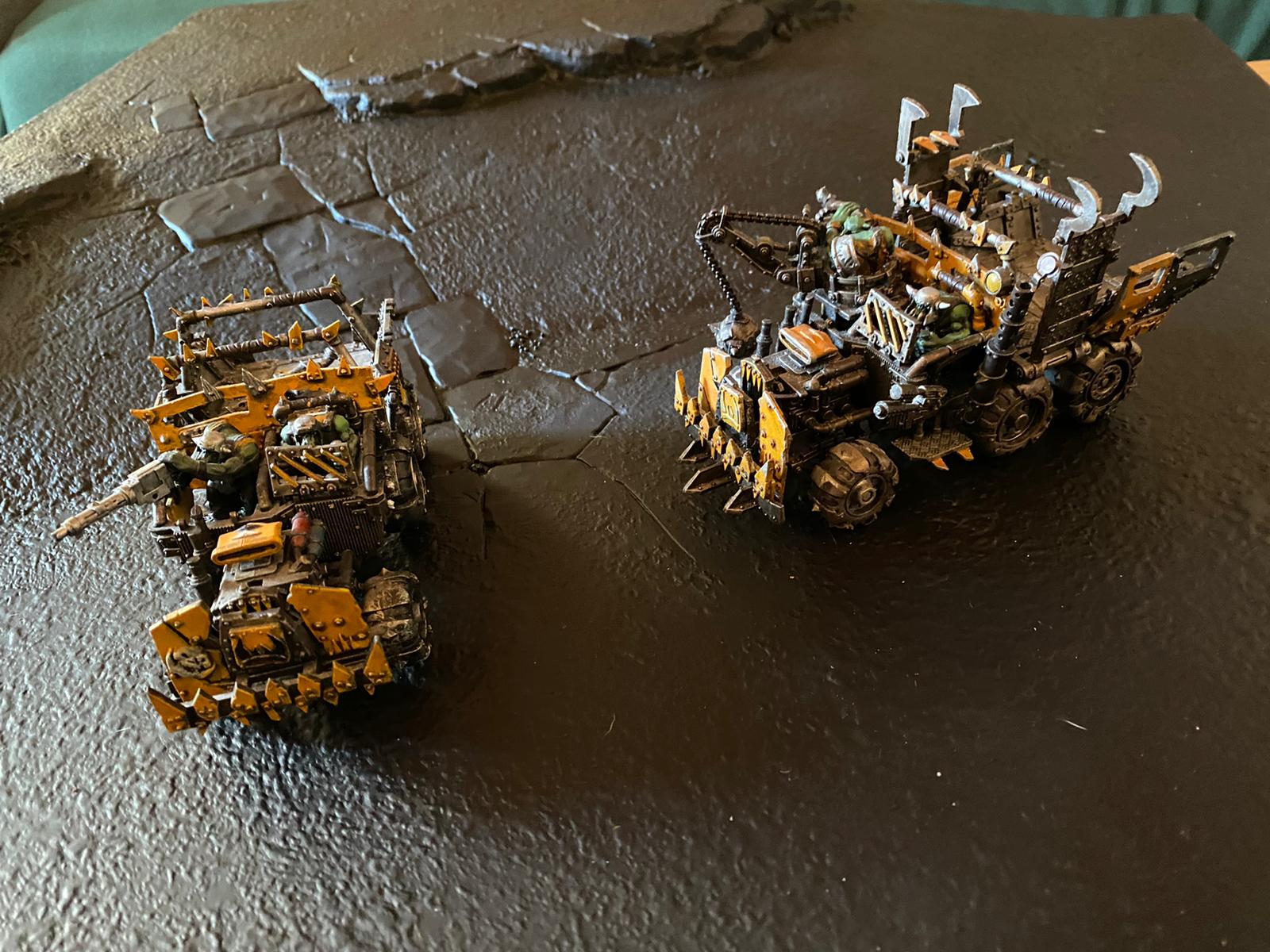 And last, but not least, my kustom trukk 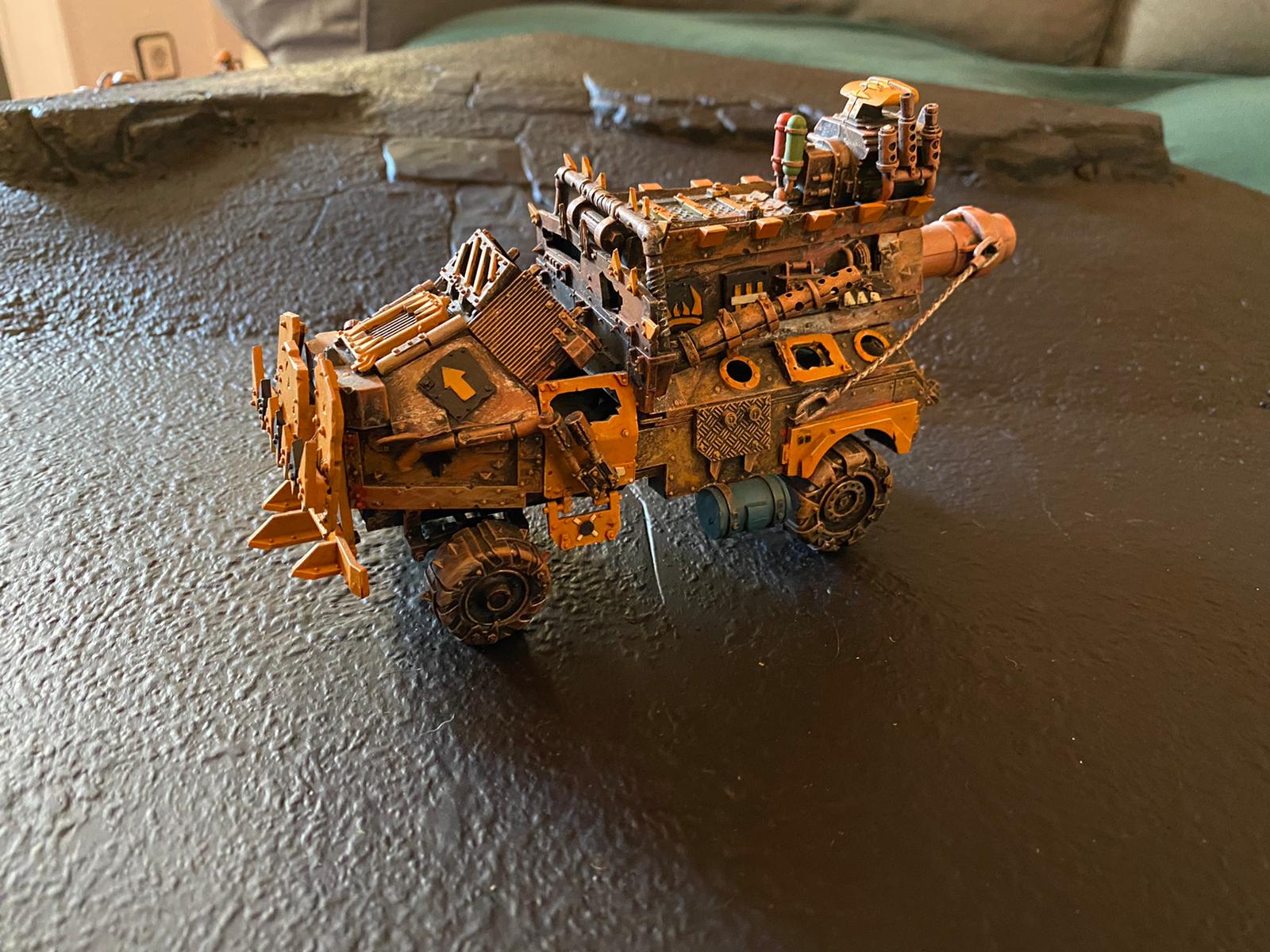 As you can see, the main color of my army will be some sort of yellow... Not necessarily Bad Moonz in game, but I like the yellow tone as a complentary to the green skin

Nice work so far, I really like the colors you chose for the vehicles and armor mainly the yellow. And the custom trukk at the end is cool too, into the whole post apocalyptic type stuff so I love seeing the vehicles people come up with for Orks.

Yesterday I started a new project, since I have a table but almost no scenery... I had to build something. And it had to be ORKY 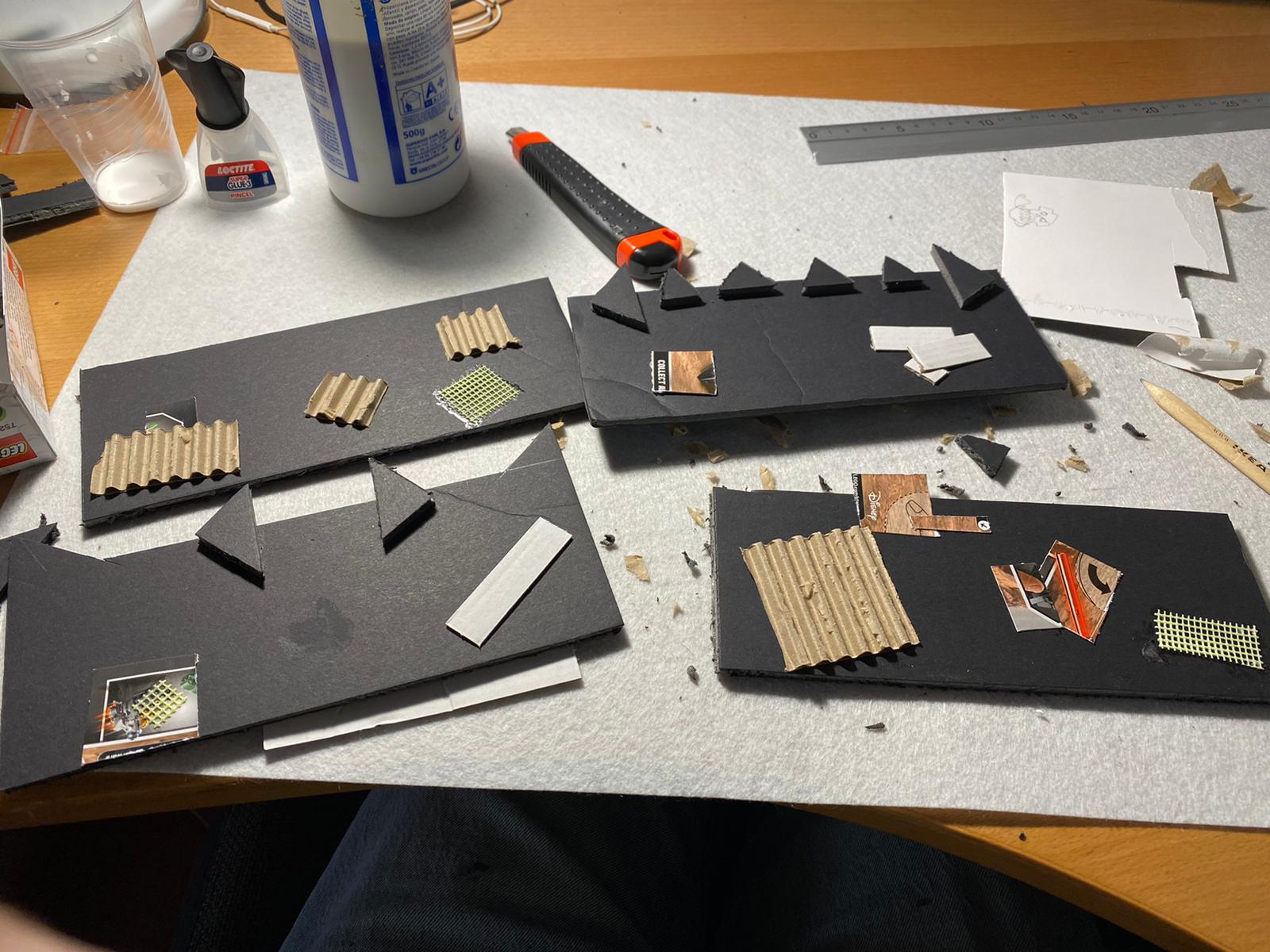 Next step is running to the store and grabbing some balsa wood to make the bases, will keep you updated

Here's a quick update:
Been quite busy, but managed to prime and give a first coat to my ork town's barricade:
Spoiler 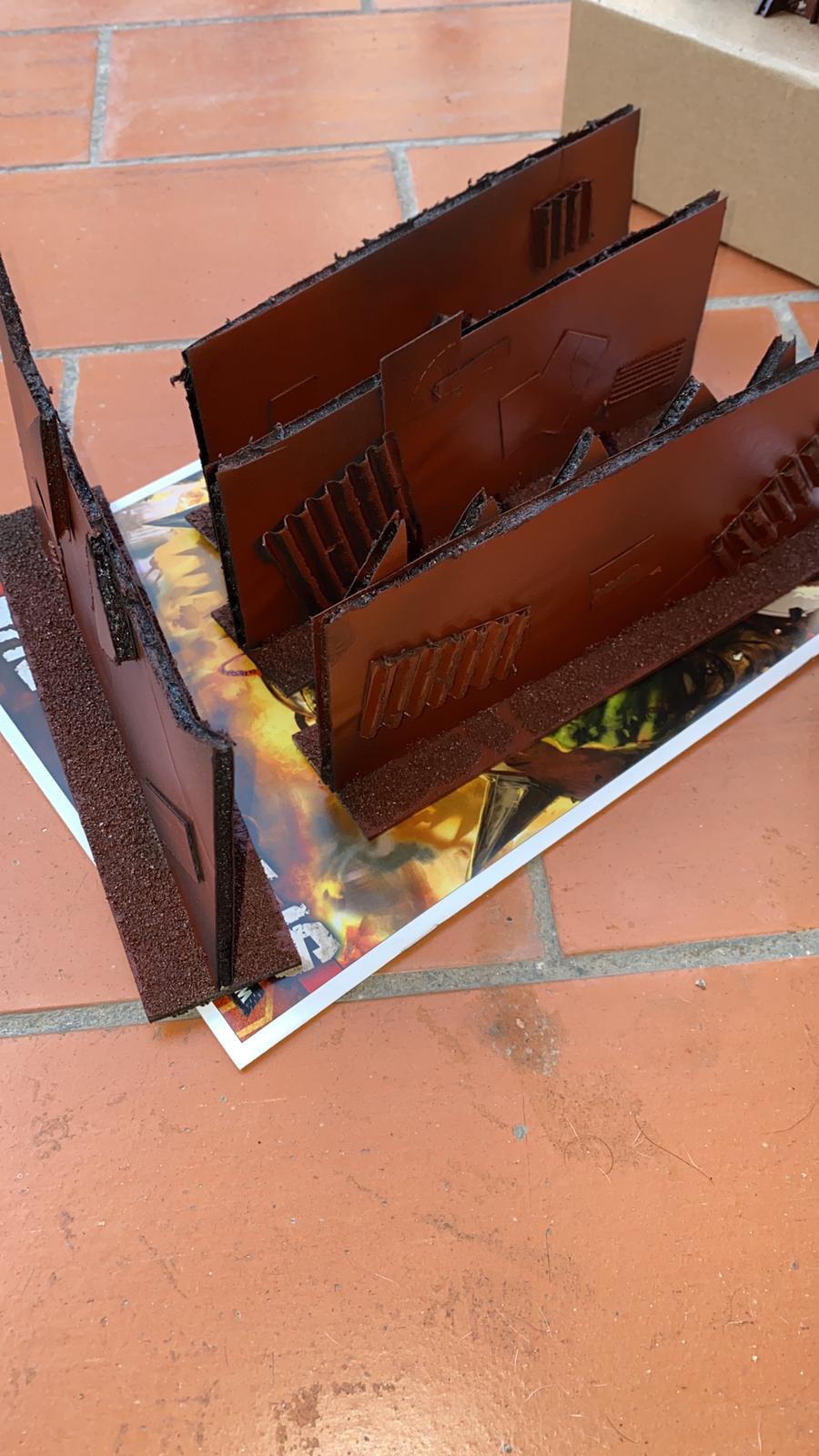 Tried something fancy for the side door (40mm wide, wil do a 10cm big main door)
Spoiler
https://i.imgur.com/qaenzvb.mp4
Tonight I've got a 1500 point game vs Chaos, list looks something like this:
Freeboota Batallion
Big Mek w/ SSAG
Weirdboy
3x10 Gretchins
10 Tankbustas
10 Flash Gitz
Trukk
Evil Sunz Batallion
Deffkilla Wartrike
Weirdboy
2x20 Boyz
10 Gretchins
Boomdakka Snazzwagon
Shokkjump Dragsta
3 Warbikers
Main idea is Flash gitz on the trukk, giving the tankbustas a +1 to hit, so they can blow stuff on 4+, grot shields on the tankbustas if needed, and I like the bikes even if not competitive, maybe they will manage to get a lightly defended objective? we'll see
Will keep you updated

Okay, so the game went good for the orky side, flash gitz popping the clan culture for the tankbustas and the SSAG was awesome
The Evil sunz batallion... Not so much, I don't know if it's because I've got too few vehicles, because I used them wrong or why, but didn't worked as expected.
In the painting side, I think I've found my paint scheme. It takes so long to do each mini, but the results look so good to my eye. Take into account the pants, boots and base aren't done yet
Spoiler 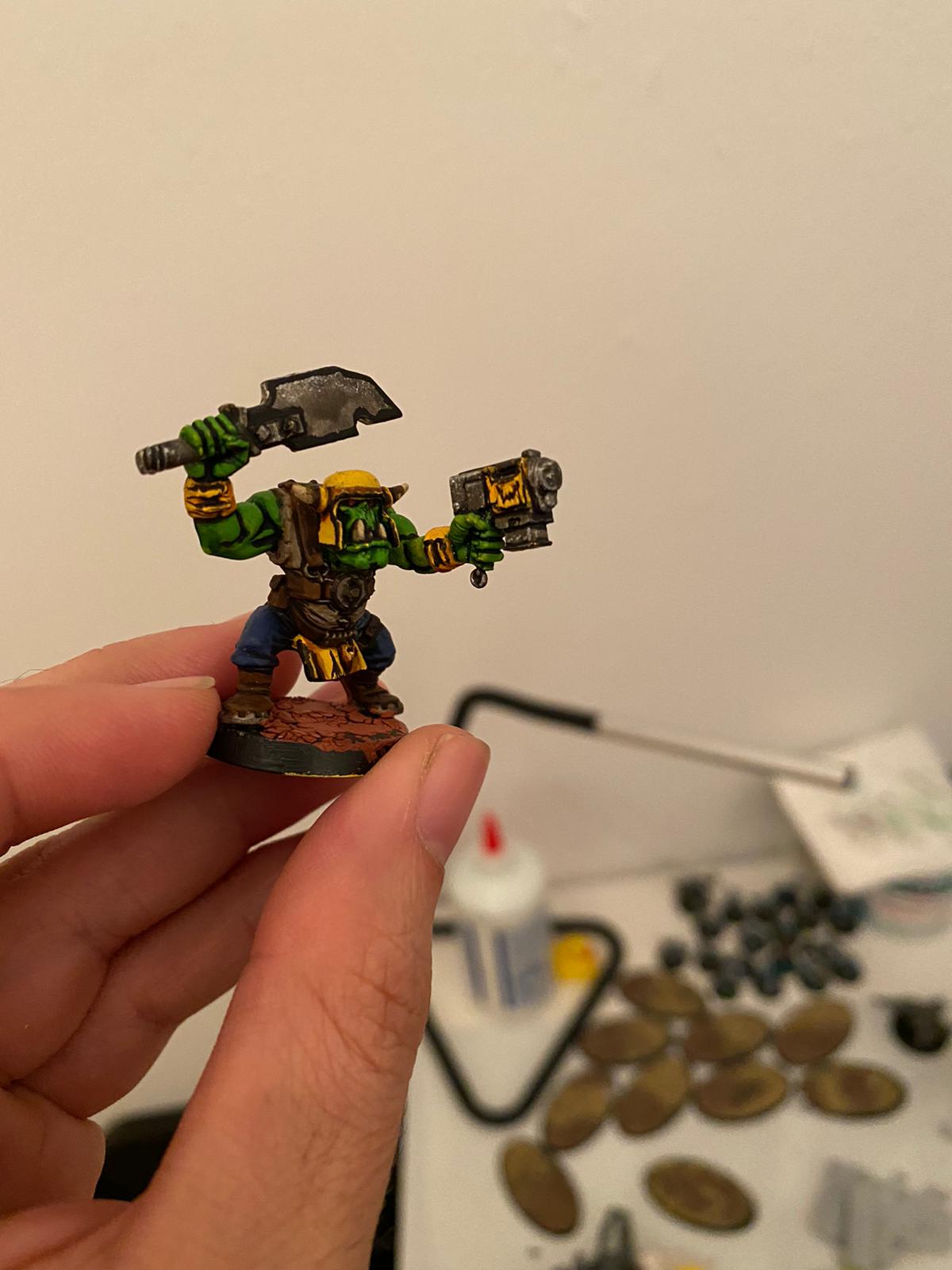 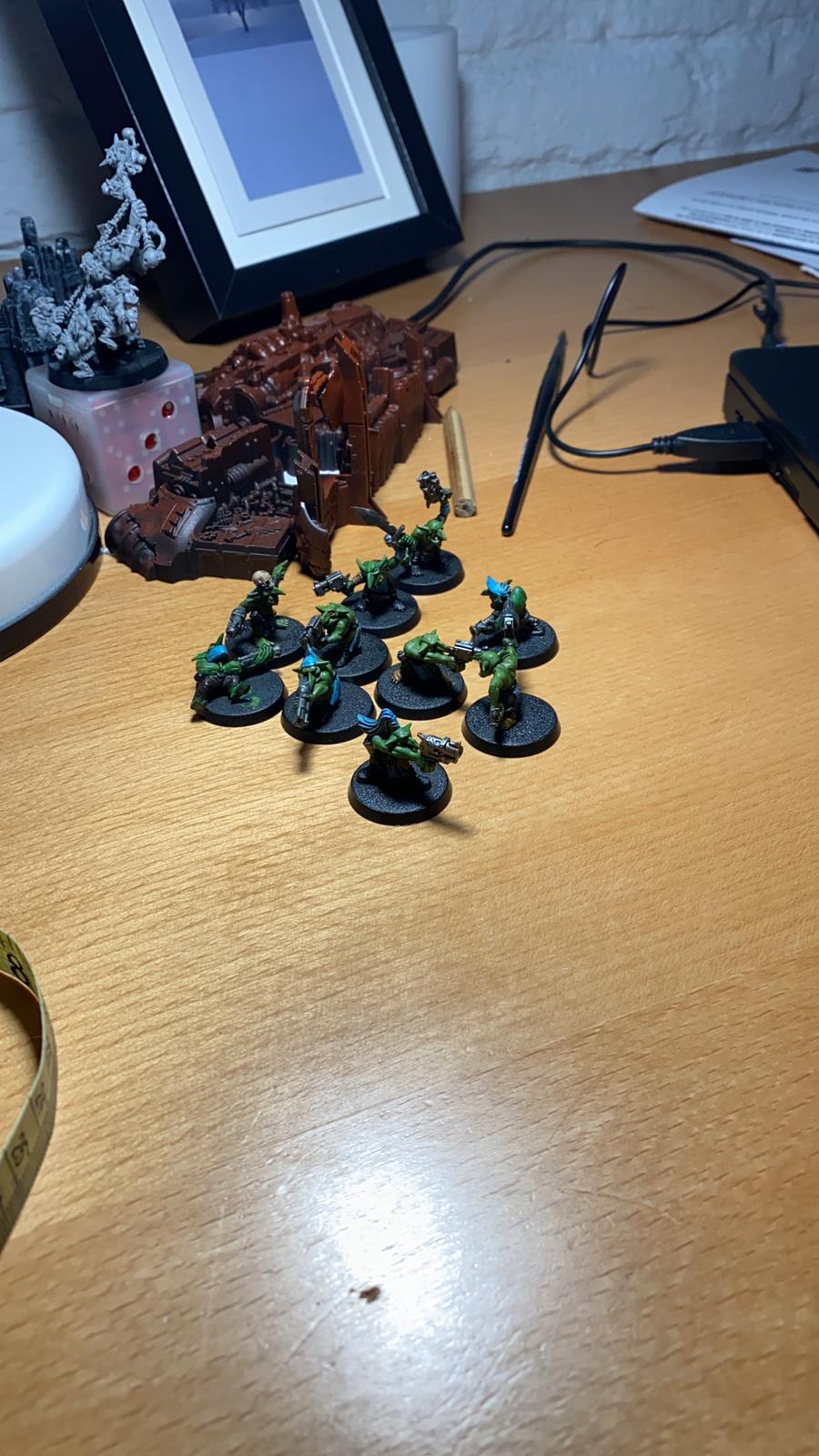 In the followng days I'll play my first ITC game, 2000 points against an ork friend. We will see how it goes