I've reinvented my home brew chapter (previously the Iron Hawks until a GW employee made them an official chapter). I wanted to alter their colour scheme anyway as I felt the previous colour scheme was a bit dark and I wanted to try out some new painting techniques, so they have become the White Vipers.

It was also an excuse to buy a new boatload of minis.

Lots of TLDR, be warned sorry. 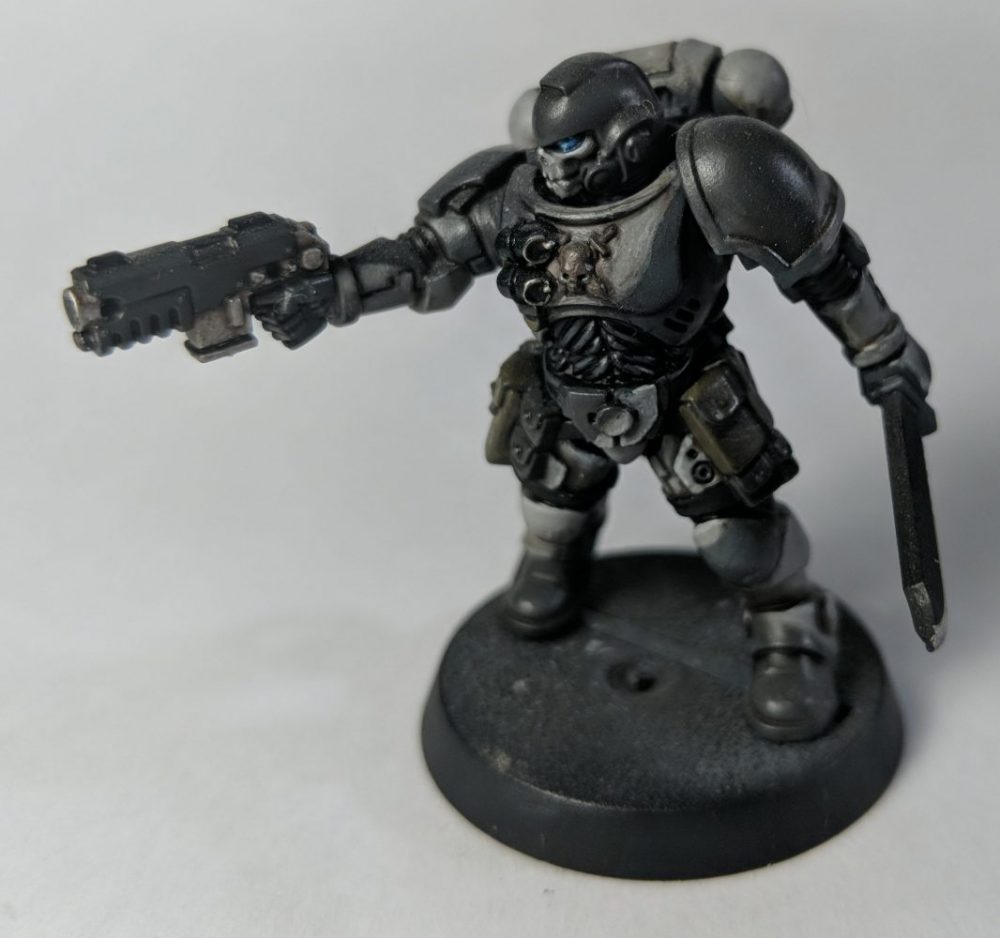 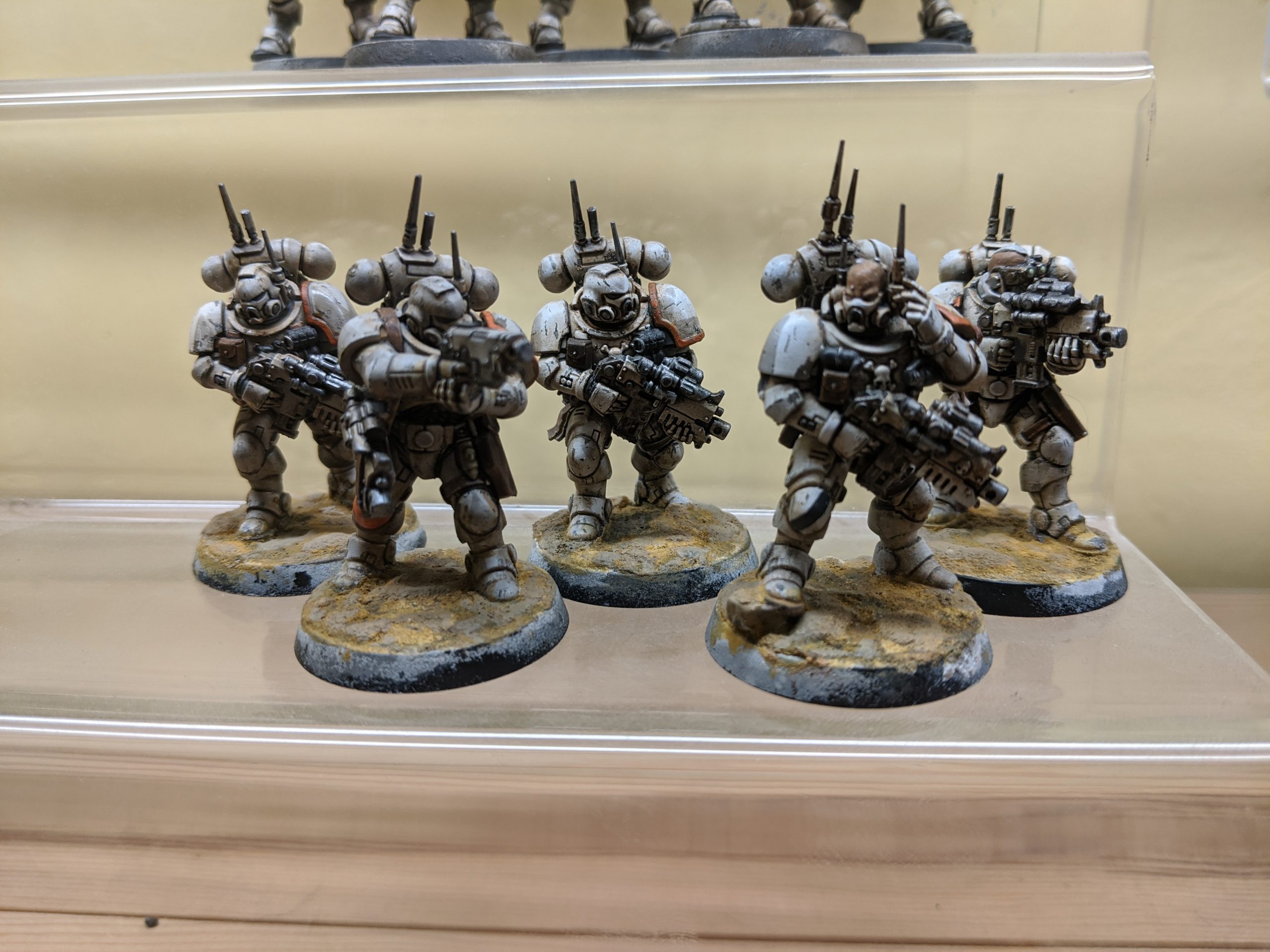 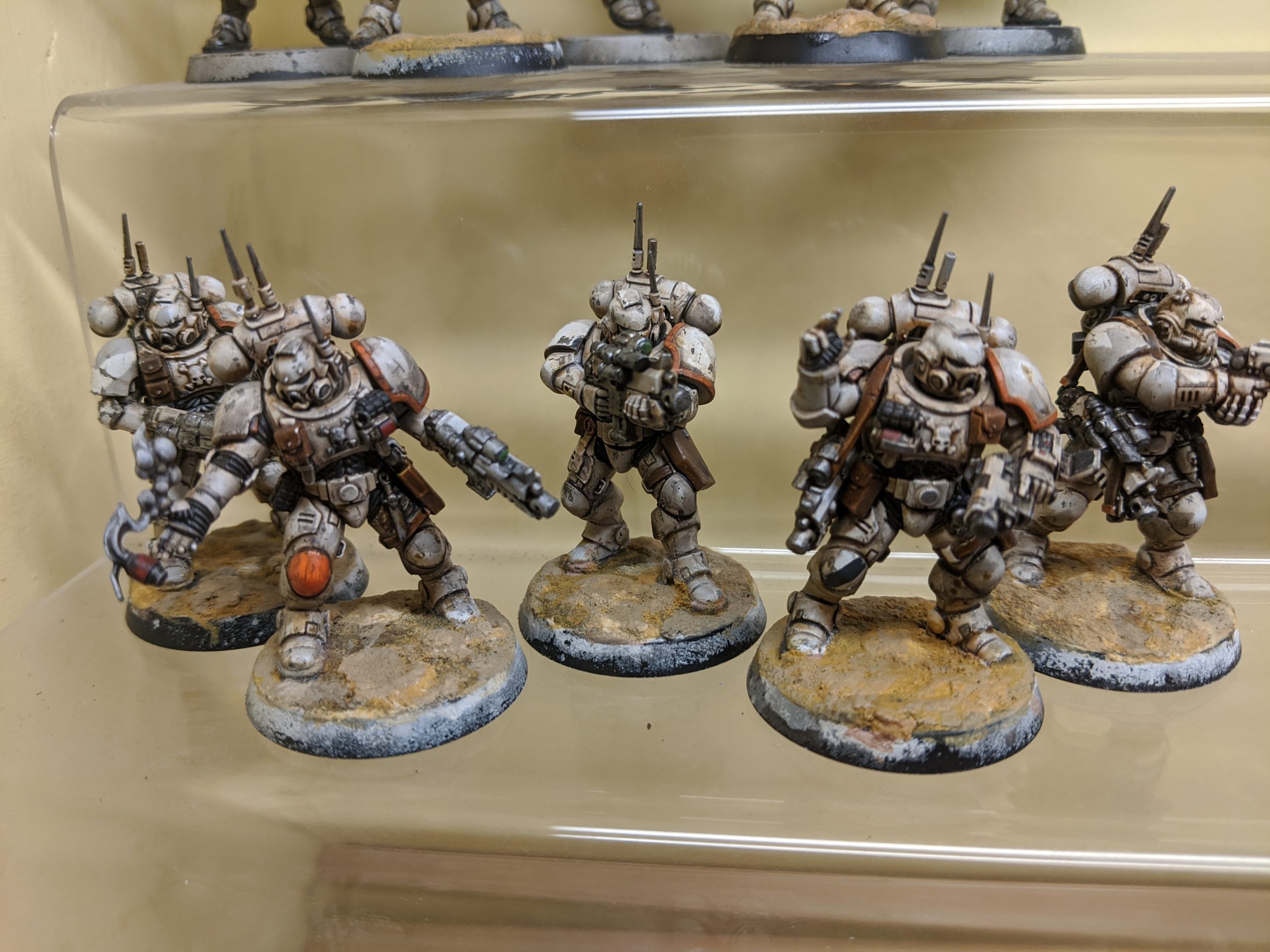 Lieutenant painted in the same scheme. Again it’s a bit muddled and camo is more of a suggestion, later models would have better contrast. 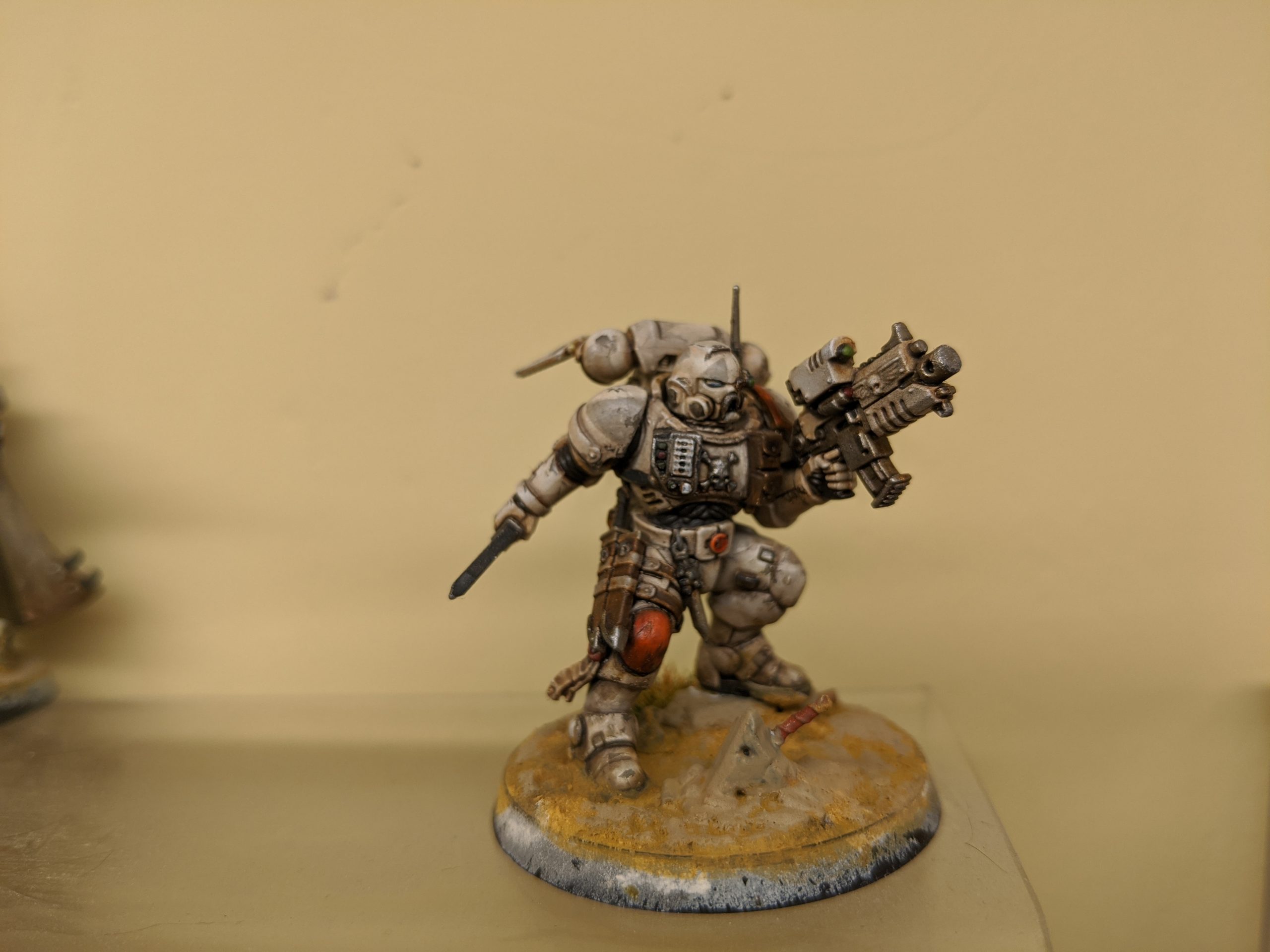 Captain, outlining the camo added a bit more definition to the camo but takes more time to do, I would continue this on characters and display models later but impractical for rank and file if I want to get troops on the table fast. 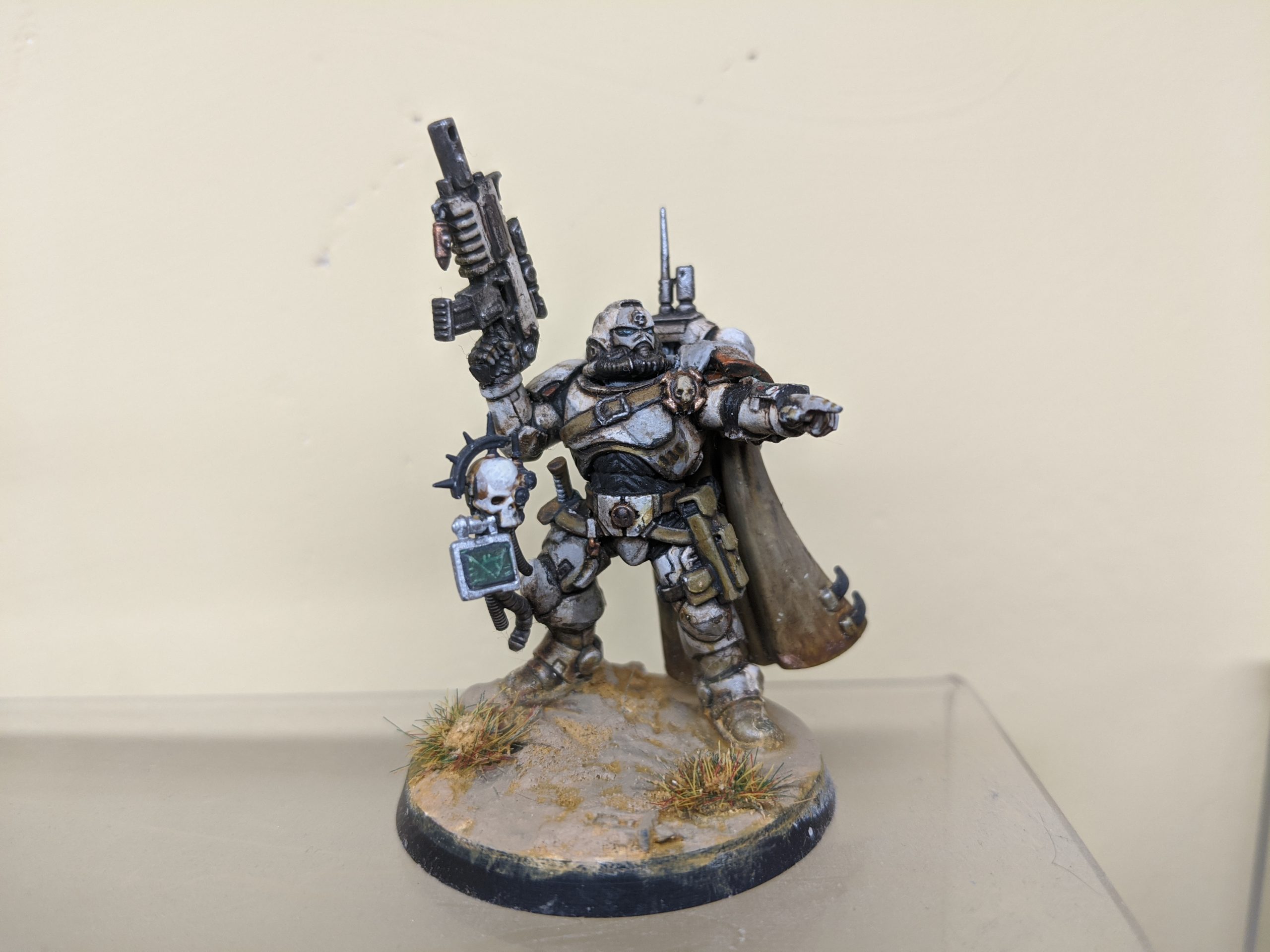 Smash captain kitbash. As my force was to be primaris only I didn’t want to include the older marines due to the scale discrepancy. However I always love melee units with jump packs, so for now hes a counts as. 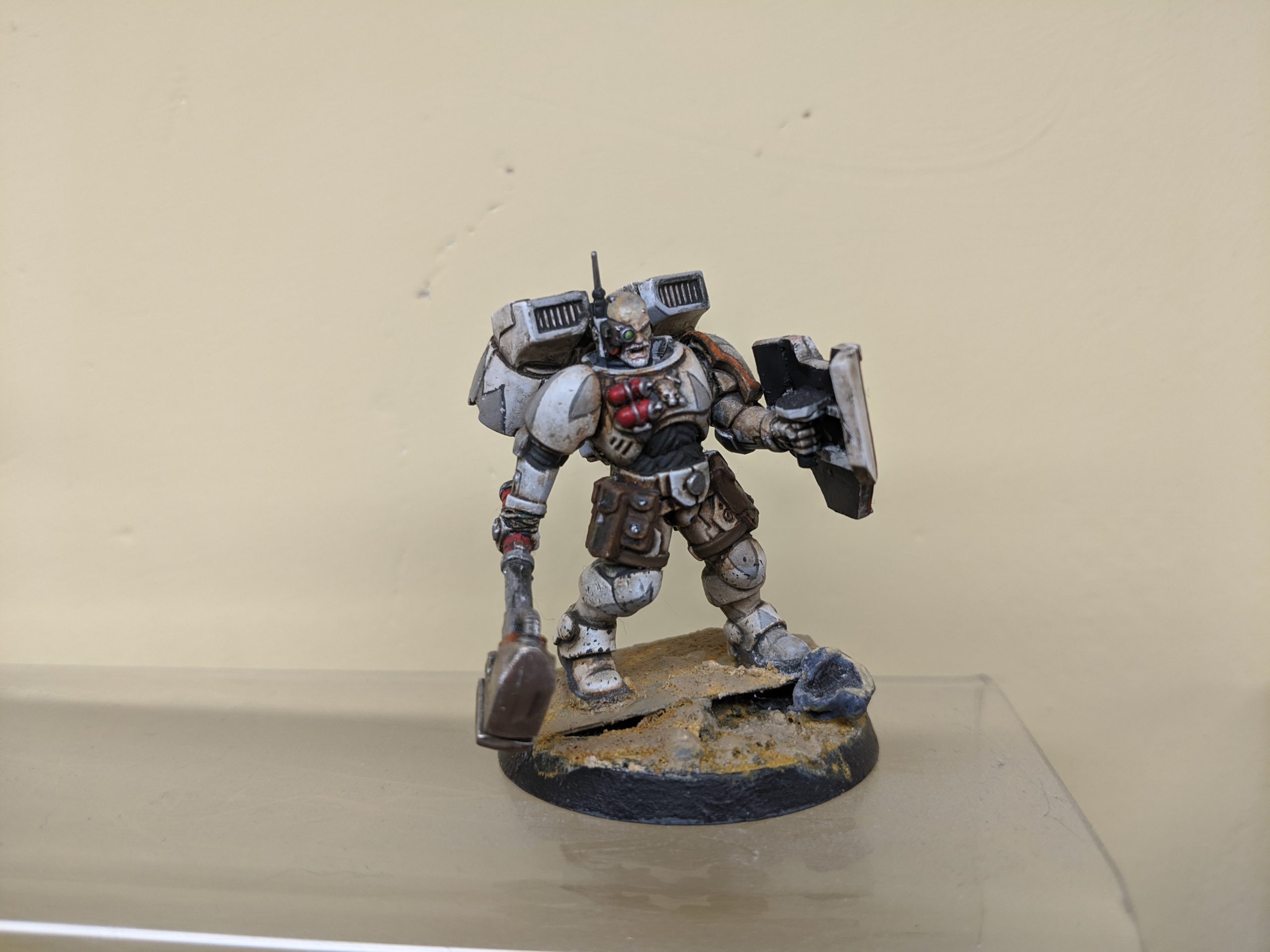 This model forgoes the Hairspray technique for more traditional weathering chipping, I think I prefer the end result but again not feasible to do on all units if I want to get them painted and on the table.

My second full squad of rank and file. Using the revised recipe, using the hairspray technique. 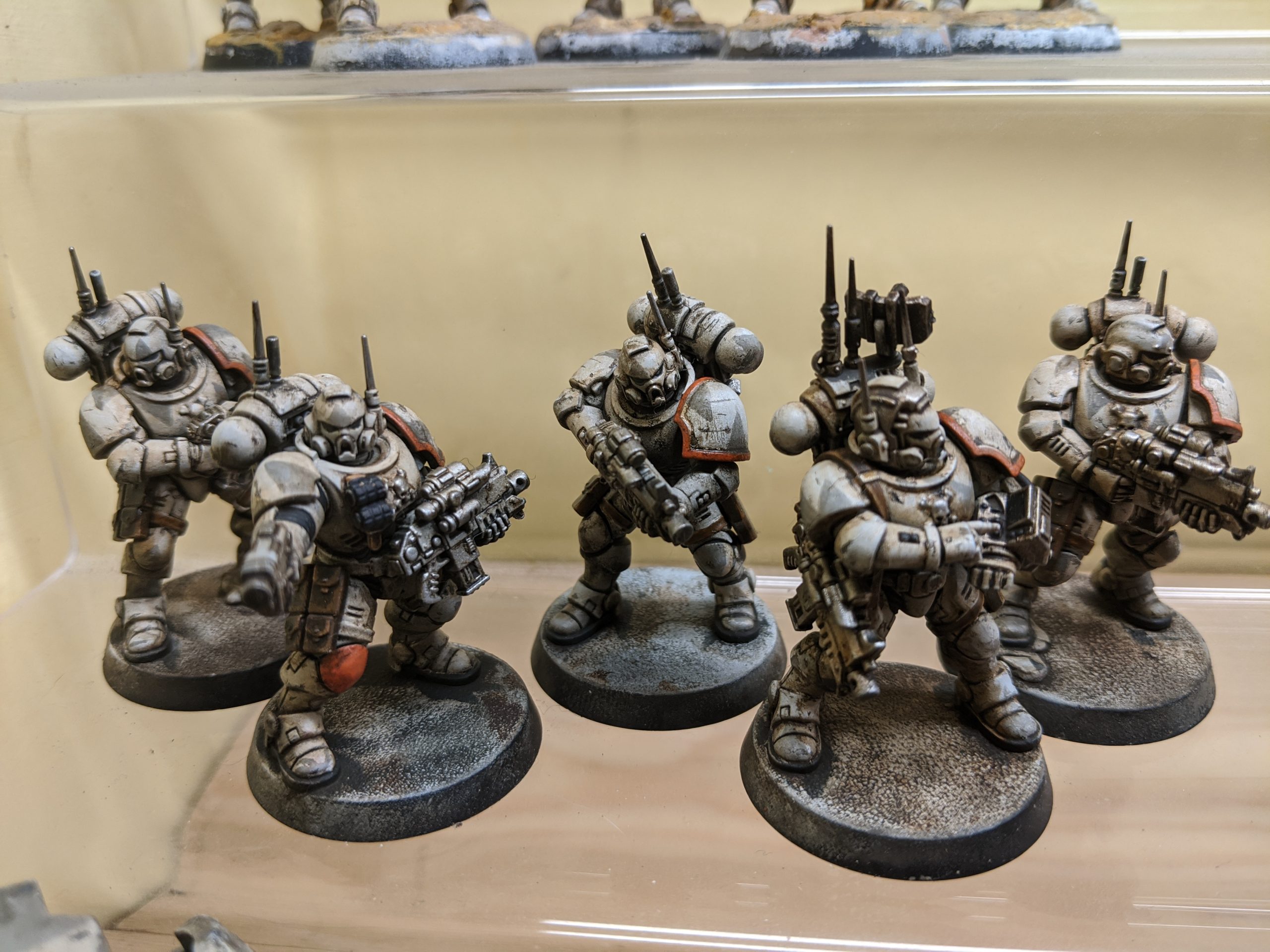 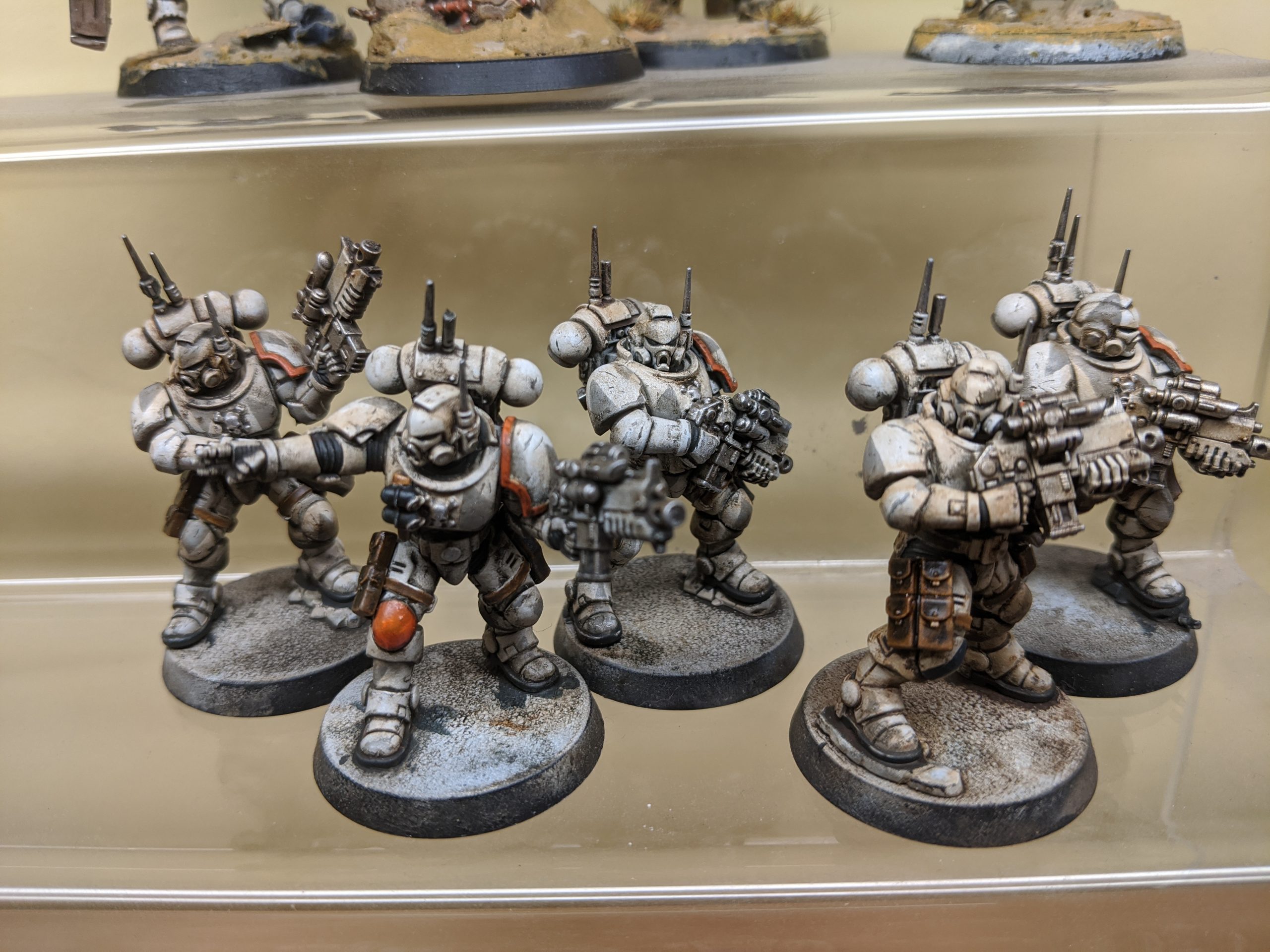 I think this creates the right balance of contrast on the Camo, without losing the details that occurs with some camo schemes.

Reiver squad, this was me putting my skill to the test, I really adore these models and I wanted to make them look the best I could so I went all out. I went with the classic chipping technique. You can also see my chapter markings some of the shoulders. These guys are magnatised (for kill team) so they are missing some shoulder pads, I will attempt to find some bits. 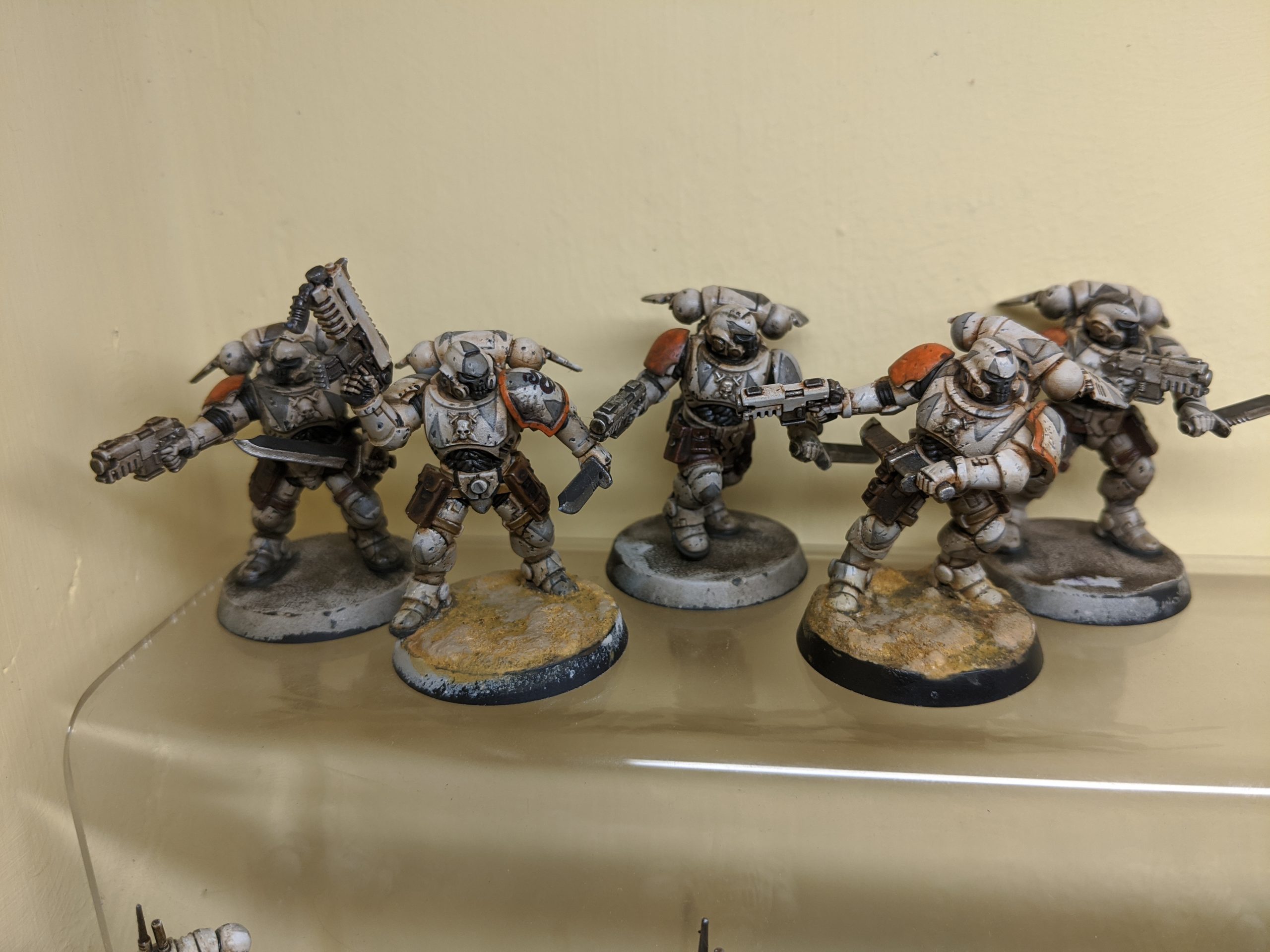 Redemptor, not fully happy with this guy, I need to clean him up a bit and add highlighting. He looks too dirty, even by my standards. 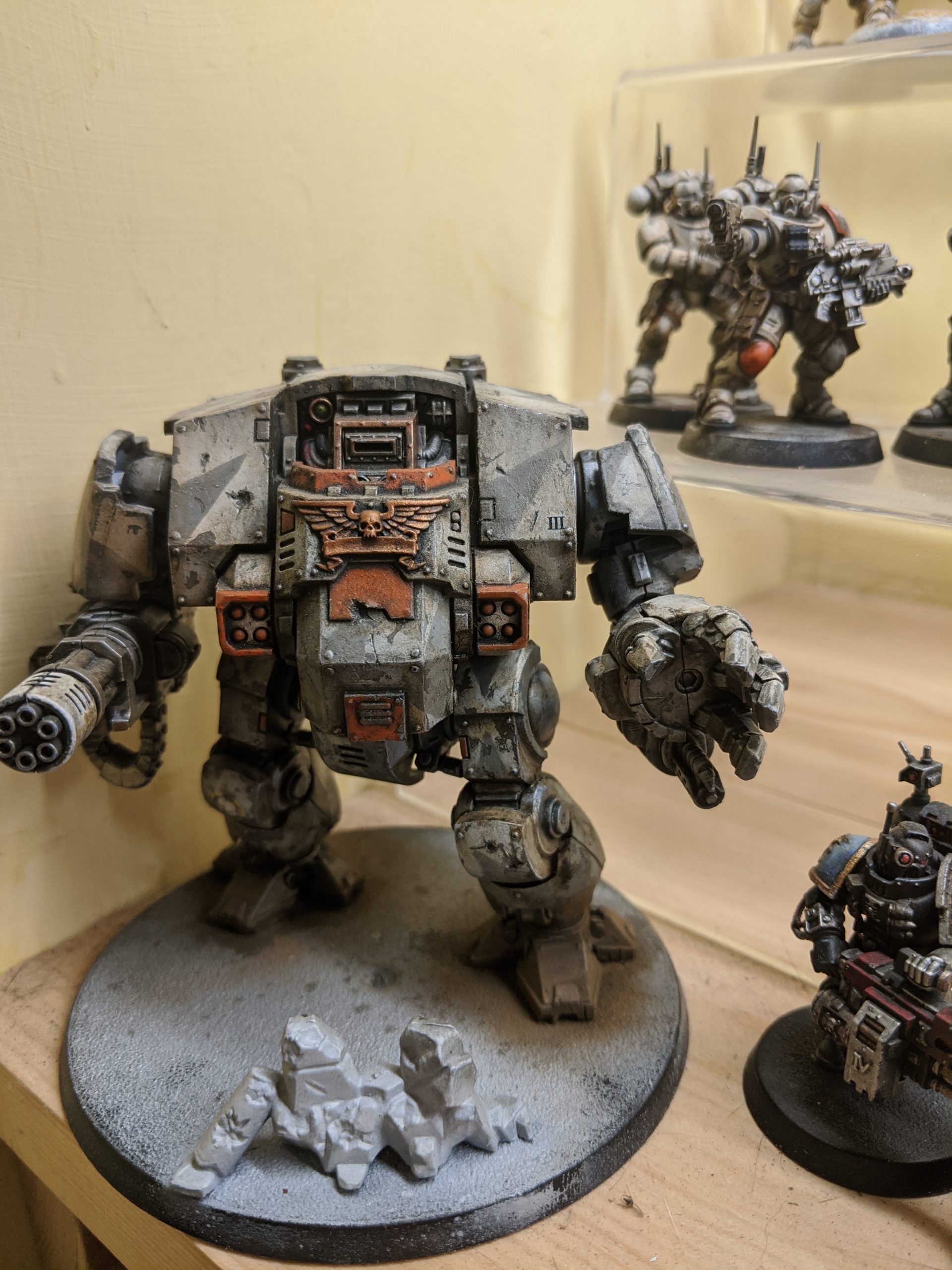 “Shrike”, of course they were going to be Raven Guard successors, definitely not any other Legion that favours subterfuge and sneak attacks. 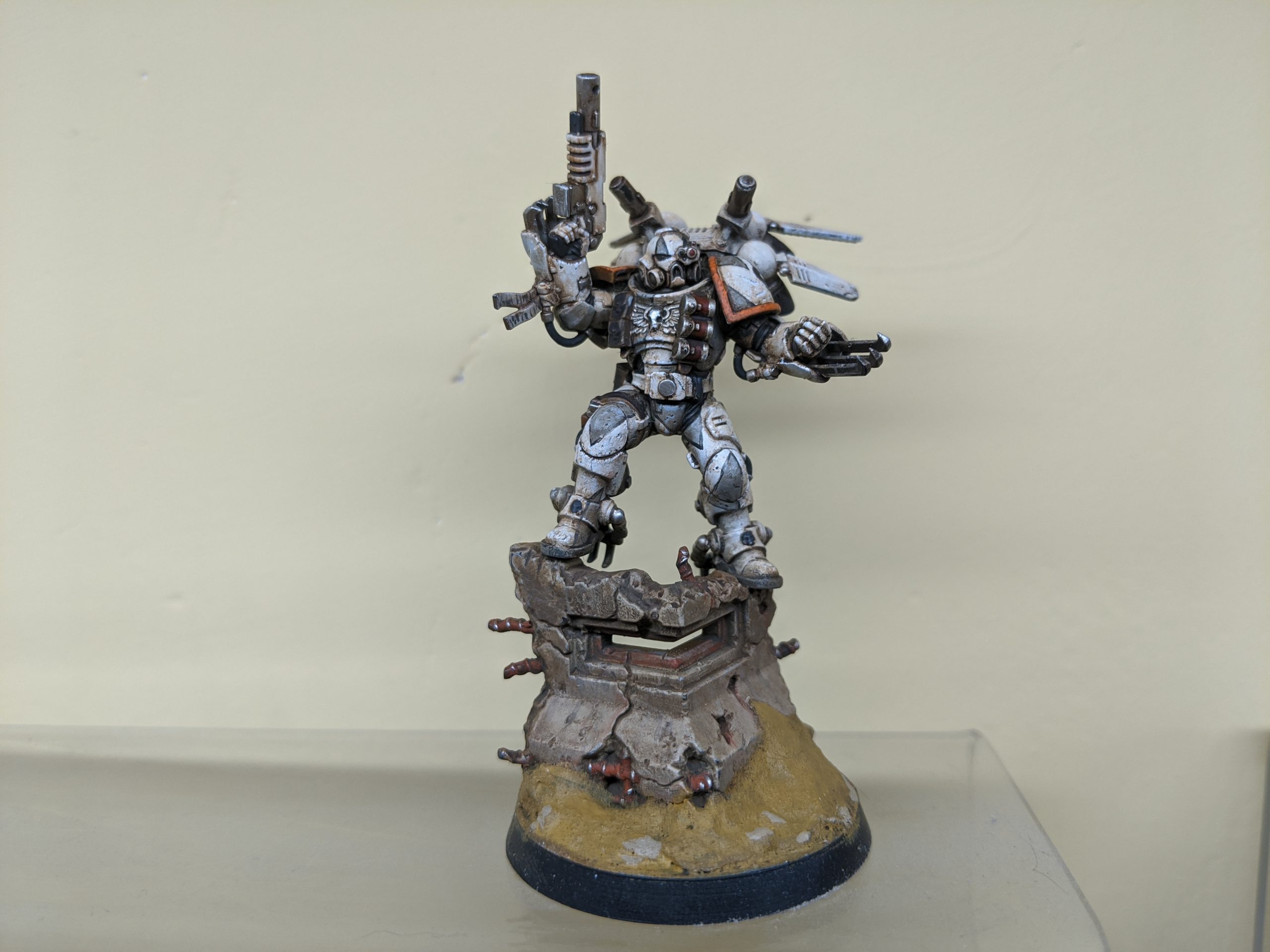 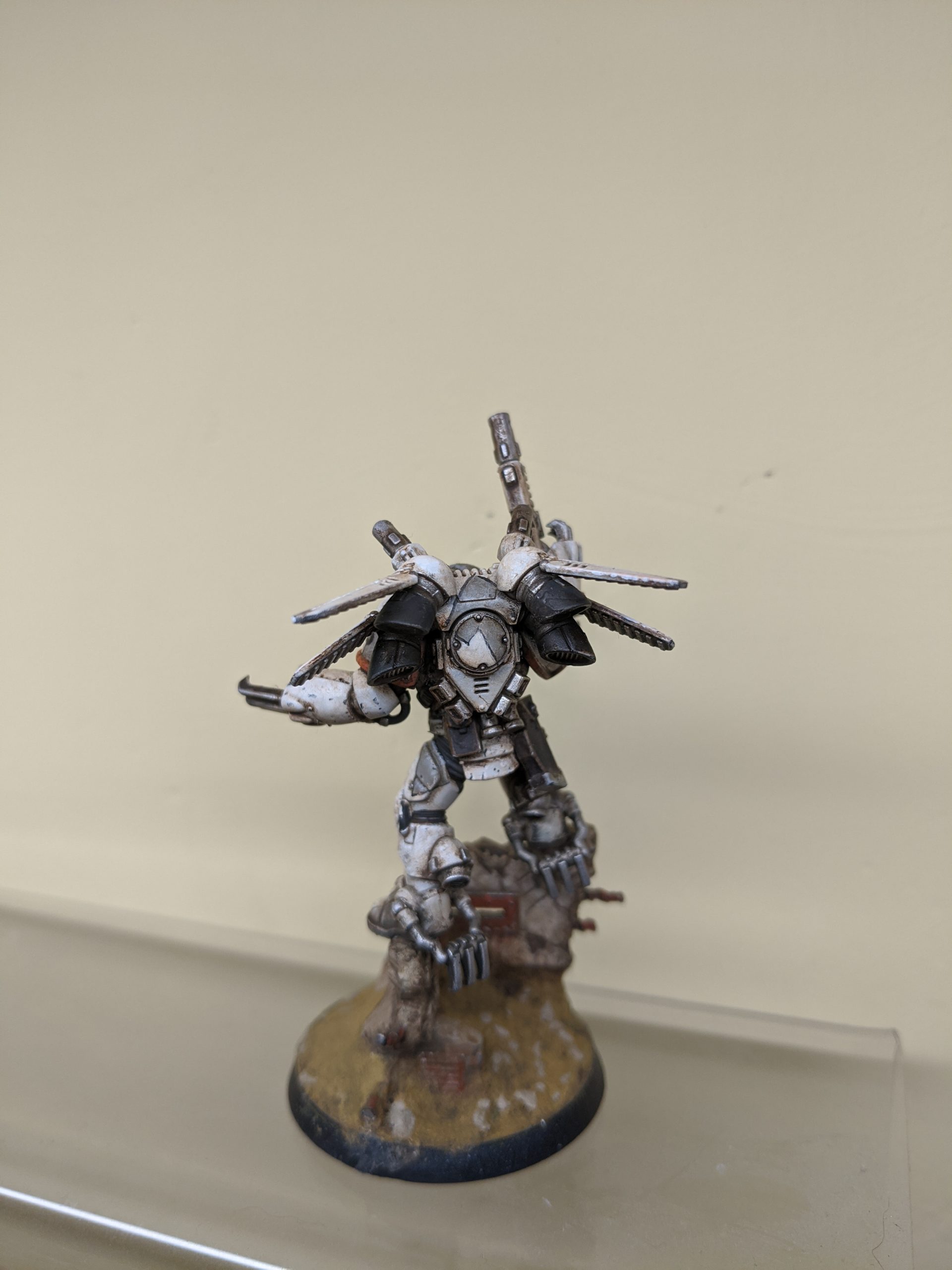 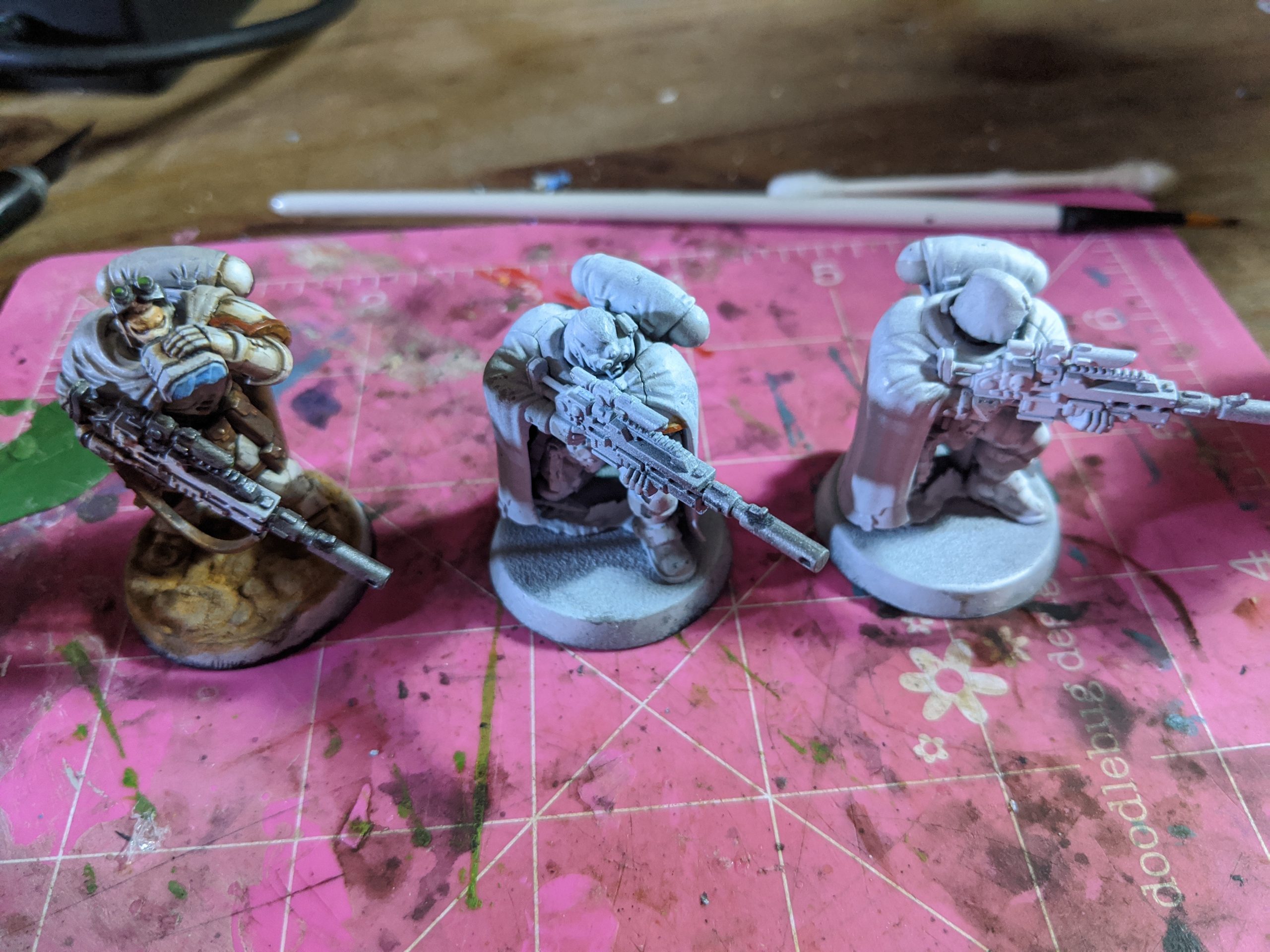 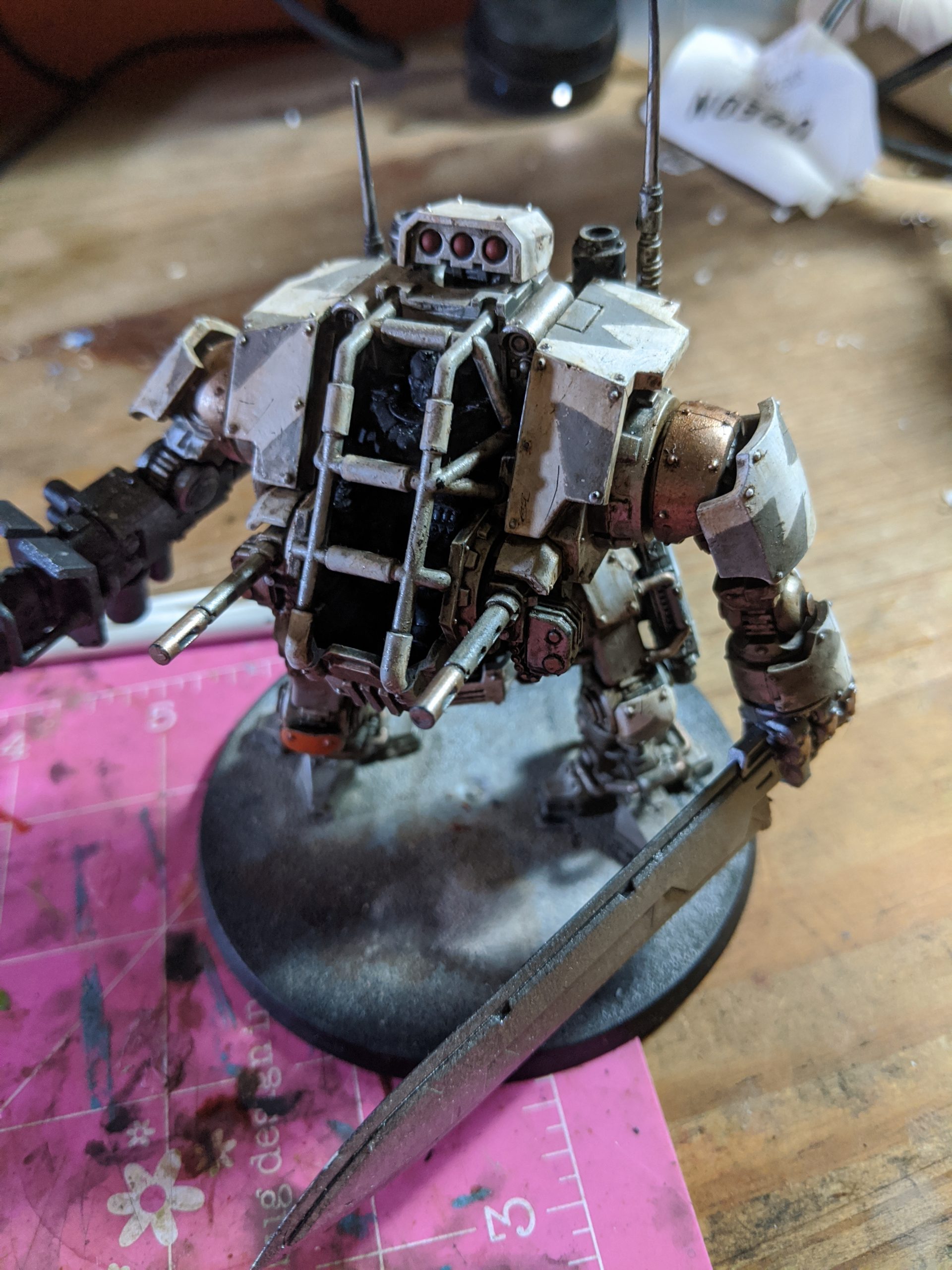 Librarian is nearly finished, I can’t decide on how I want the sword to look, a glowing sword kinda seems unstealthy, but then again hes a librarian, he probably walks around shrouding himself in peoples minds rather than actively trying to sneak 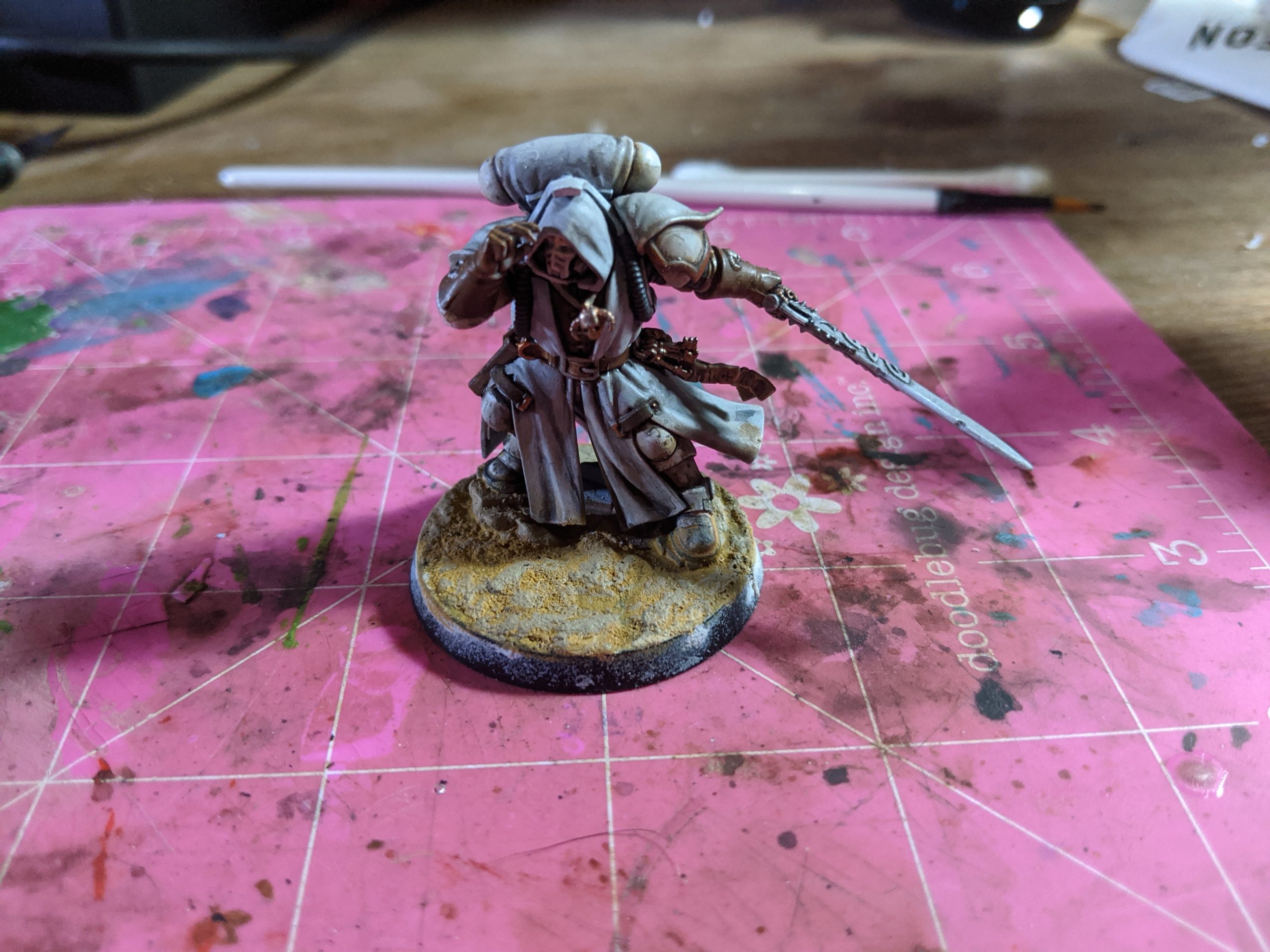 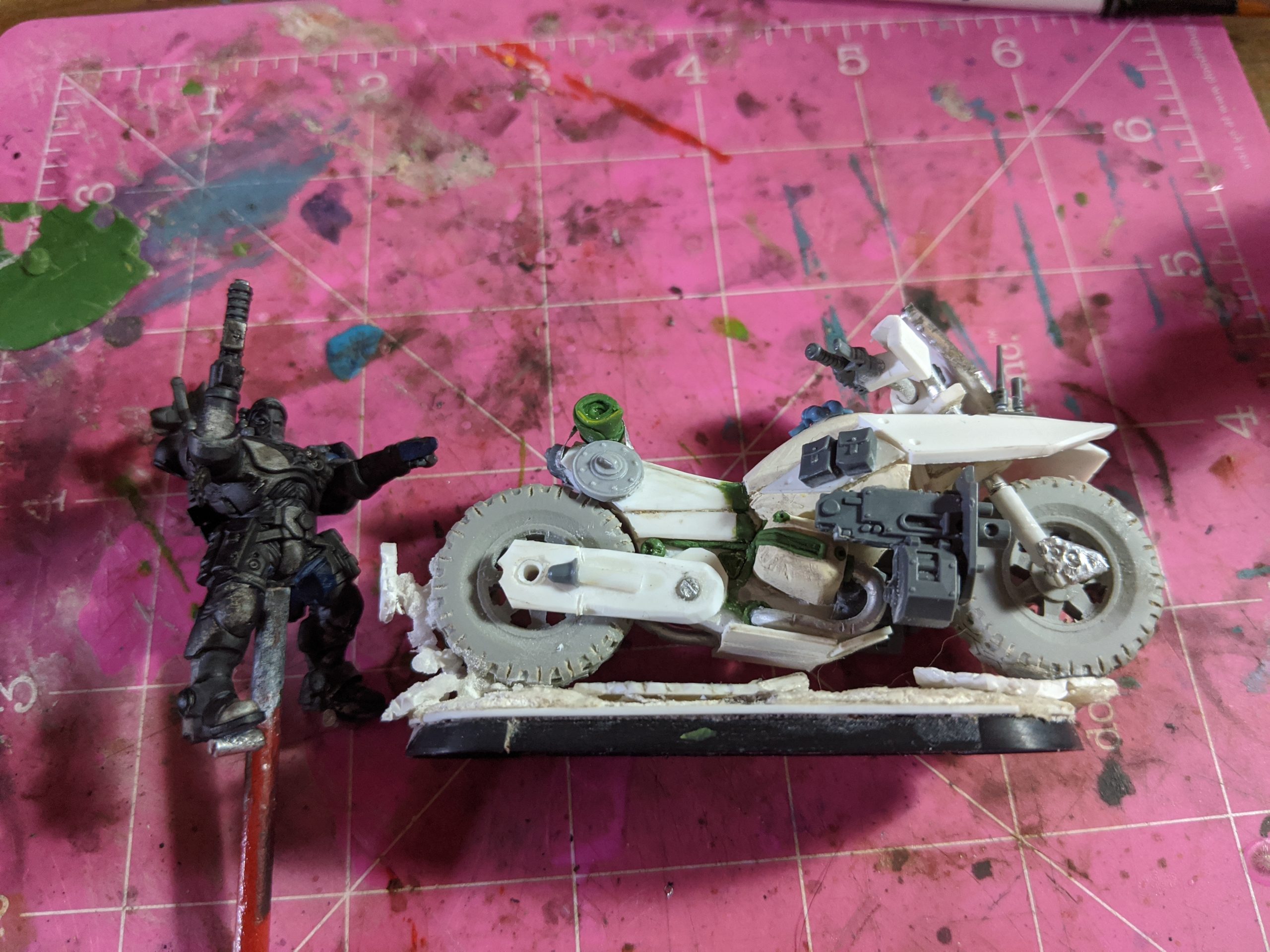 This one is on hold until we get a clearer picture of THAT image.

Looks great. I like it when models look like they’ve been in the war zone for awhile.
I’ve done an army where I didn’t clean up the base rims because I liked how it looked but I wonder if it wouldn’t help your guys stand out from the bases a bit. It looks like you did it in a couple guys here and there.

You should paint the bases, it would make them pop so much more, in a good way. Otherwise, these guys look great, looking forward to an army picture.

USMC based Space Marines, the Eagles Eternal check out their WIP blog at The Eagle Spire

You should paint the bases, it would make them pop so much more, in a good way. Otherwise, these guys look great, looking forward to an army picture.

I will. I am going to base all the units once I have finished (and added decals) the Battlesuit and eliminators and then do the bases all at once.

Models are looking great! How does this hair spray technique work your mentioned?

Yes please explain the hair spray technique. Also I would love a paint recepeie on how you achieved the 'white'.

Models are looking great! How does this hair spray technique work your mentioned?

The hairspray technique is basically a method of chipping paint realistically. Its often used by WW2 tank modelers and they favour it because you are actually chipping paint away. This gives the chip actual depth, which is subtle at scale but you can tell.

*I see no reason why application with a brush won't work aslong as your not washing the hairspray layer away. Spray can may work here too if its not a plastic based primer but I havn't tried this.

It's a fairly simple method to get some realistic chips and importantly, quick to do for rank and file troops and vehicles.

Yes please explain the hair spray technique. Also I would love a paint recepeie on how you achieved the 'white'.

Remove as much or as little of the Streak and Grime as you like.

It will stain everything slightly, including your hands (so wear gloves, and when using white spirits a resperator). I like this over the whole model as previously stated as it desaturates everything slightly and pulls all the colours together, then you can highlight with the original colour. For instance I then like to go over the stained white with pure white and highlight the edges.

Its a good way of creating focal points on models too. I like to leave in in the recessed areas and on the feet as this is where most of the dirt will collect and as I move to towards the head remove more.

You can take your time and even go back to it later with more white spirits if you feel its been to heavy, as it will reactivate the enamel paints for days after. They do not reactivate with water. Or go back with more Streak and Grime if you decide you want more as it blends super easily with previous layers.

You can also achieve similar effects with Oil washes and white spirits, though I have yet to explore this, but would open up a whole world of colour blending.

If you do, please share them here, I love to see more Camo schemes on marines.