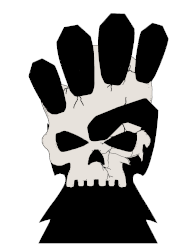 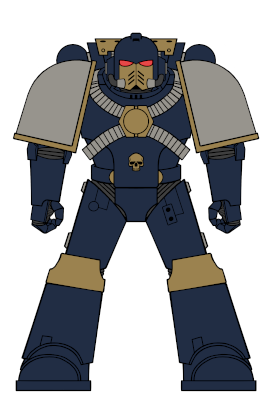 Crushing the Imperium’s enemies with remorseless force of arms, the Sixteenth Legion is the relentless might of the Imperium’s war machine made manifest.  Originally recruited from the child orphans of the Unifications Wars, its cold, yet unquestionably loyal Astartes have long fatalistically accepted that their sole purpose for existing is to prosecute bloody war in the Emperor’s name.  Carrying the light of the Imperium throughout the galaxy not as a beacon of hope and enlightenment but as a torch of merciless subjugation, the Sixteenth is known for the cruel and callous brutality with which they bring the Emperor’s wrath upon those who would insolently reject Unity, well deserving its name, the “Tyrant’s Fists.”  With the Emperor absent and his Imperium devolving into civil war, the enslaved primarch Ur-Suresh, the Captive King, sees opportunity to break free from his bondage and lead his sons to a new future decided for them by none but themselves.

Cognomen (Prior): The Sixteenth

If you are reading this thread, thank you for your interest in the Broken Throne alternate heresy project and the project’s sixteenth legion, the Tyrant’s Fists

The Tyrant’s Fists is a heavy assault legion that has diverged little from its original Terran structure.  Though it draws significantly upon the Soviet Union’s Deep Operations warfare of Kursk, Vistula-Oder, and Cold War fame for its combat doctrine, the legion lacks a real-world influence for its culture in the way that the Space Wolves draw upon the Norse, the White Scars draw upon the Mongolians, and the Ultramarines draw upon the Greco-Romans.  This is intentional, as I want the story of the legion to go from being an army of unquestioningly loyal myrmidons into a brotherhood of warriors caught up in the nonstop warfare of the Great Crusade and the treachery of the civil war, leading them onto a path to discover for themselves their place in the galaxy.

Some of you may wonder as to the legion’s name, particularly how by calling themselves the Tyrant’s Fists, they seem to be offensively implying that the Emperor is a tyrant.  While the story of the name will be discussed in greater detail later, essentially, the legion’s name was given by the subjugated peoples of a noncompliant world who had not only reject Unity but also dared to most gravely offend the Emperor, earning his rare wrath and abject hatred.  When all was said and done, the Emperor, rage still burning, let the name stick as a tacit example of what happens when one offends the Emperor.

The Tyrant’s Fists aren’t always as callous and cruel as they were during the campaign that gave them their name.  In fact, in a normal compliance, they might try to minimize casualties. However, those battles are the less interesting ones, and Imperial Remembrances who seek to chronicle the deeds of the legions might focus only on those that particularly stand out, namely ones where the Fist’s myrmidon-like loyalty made them prime candidates to carry out bloody compliance campaigns or acts of reprisal against particularly intransigent foes.  In this way, the legion’s dark reputation, deservingly or undeservingly, builds upon itself, leading them to be increasingly slated for such campaigns, much like how the Iron Warriors began as just a normal legion who happened to be good at siege warfare being increasingly shoehorned into that role.

Ancient Vashun of the Tyrant’s Fists
Vashun was of Terran extraction, earning some fame as a leader of escalades, though he never merited a rank beyond that of Centurion. Mortally wounded on Reltama II, he was preserved in a Dreadnought and outfitted for siege duties, the better to fit his abilities. Many a breach was forced with his fist or siege drill, and the kill-tallies he reaped with his inferno cannon and heavy bolter were vast indeed. He was never one of the ancients called upon to offer wisdom or guidance, merely a killer of unremitting fury to be set loose upon worthy enemies.

Also tagged with one or more of these keywords: A Broken Throne, Alternate Heresy